2 kinds of algae in one side of the tank

I've read all the stickies and quite a few other articles about the causes of the different kind of algaes, but I still have doubts about what is going on.

Tank is 360L/90G and 6 weeks old.
Dropchecker is light green and fairly stable from day to day (on 2 hours before light on and off 1 hour before light off)
Lights are LED - 2 x plantlight (5200 lumen combined) on for 7 hours and 1 x white light (4000 lumen) on for 5 hours. All the light combined comes to about 24 PAR, so it's a little bit above medium afaik.
Full tank length spraybar pointed slightly up to the surface and distribution looks to be good in most of the tank (some of the hardscape might be blocking some spots). HC on "the hill" is pearling nicely, starting in halfway through the photoperiod.
Water is very hard and PH is about 7.6 before CO2.
Dosing liquid fertilizer without PO4 and NO3 daily per instructions for medium plant mass.
NO3 readings were stable at 35 but dropped to 15 after a 10% WC and cleaning of the filter 2 days ago.
PO4 reading is 0.05, which I know is low for the plants abillity to uptake CO2, so I dosed a week ago per the instructions on the bottle, which made the reading off the scale (>2.5) I therefore did a 35% WC and the next day it was back at 0.05 - I haven't dosed this since.
Filter material is recycled and using the Seachem Stability bacteriastarter, I haven't been able to detect any NH3/NH4 or NO2. So I doubt it's an immature tank issue.
Fish load is 72% according to AqAdvisor
A lot of RCS, 5 amono's, 5 oto's, 3 algae eating snails, none of them ofcourse touch this algae.
Let me know if I missed any important information.

My question is in short: cause, treatment and future prevention? Dose more/less/other? More/less light? More WC's or less?
I have a big testkit and can test for pretty much anything.

Thanks A LOT for your time.

First an overall picture of the whole tank, to get an idea of the plant mass and distrubution.

A closeup of the left side where the problem is. On this side of the tank I have a TwinStar Nano+ reactor, which I just turned off today to see if that has an effect: 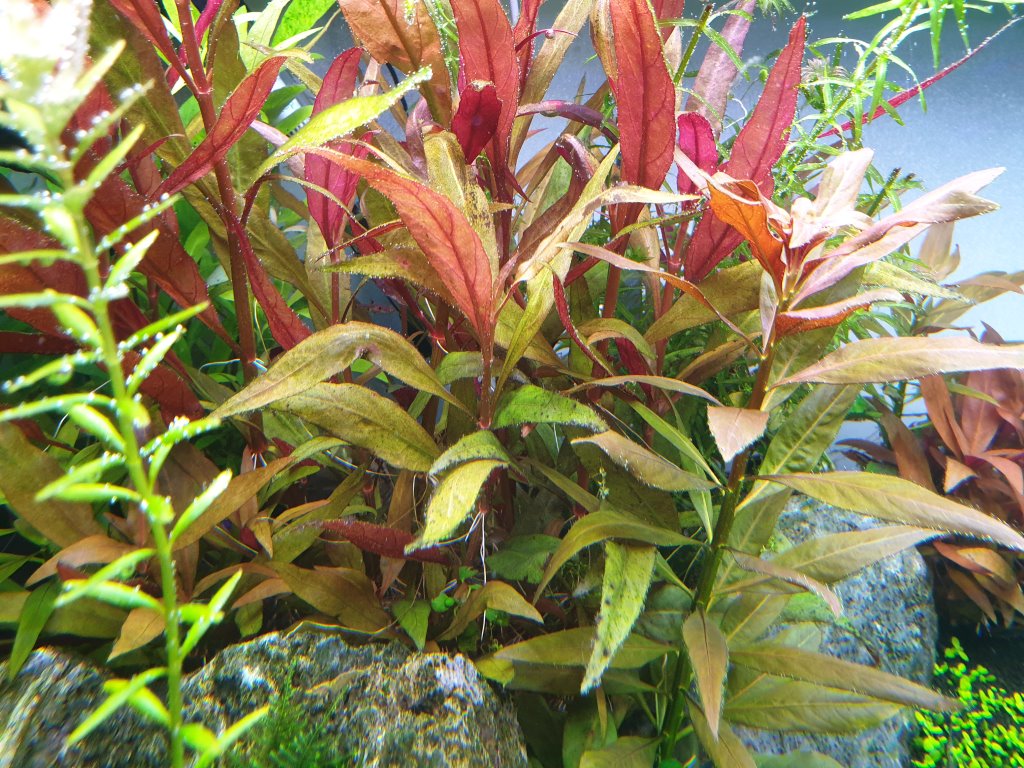 Closeup of the top of the red plant seen from the side to show it's not only black algae but some green as well (okay this is very close to the strong white LED): 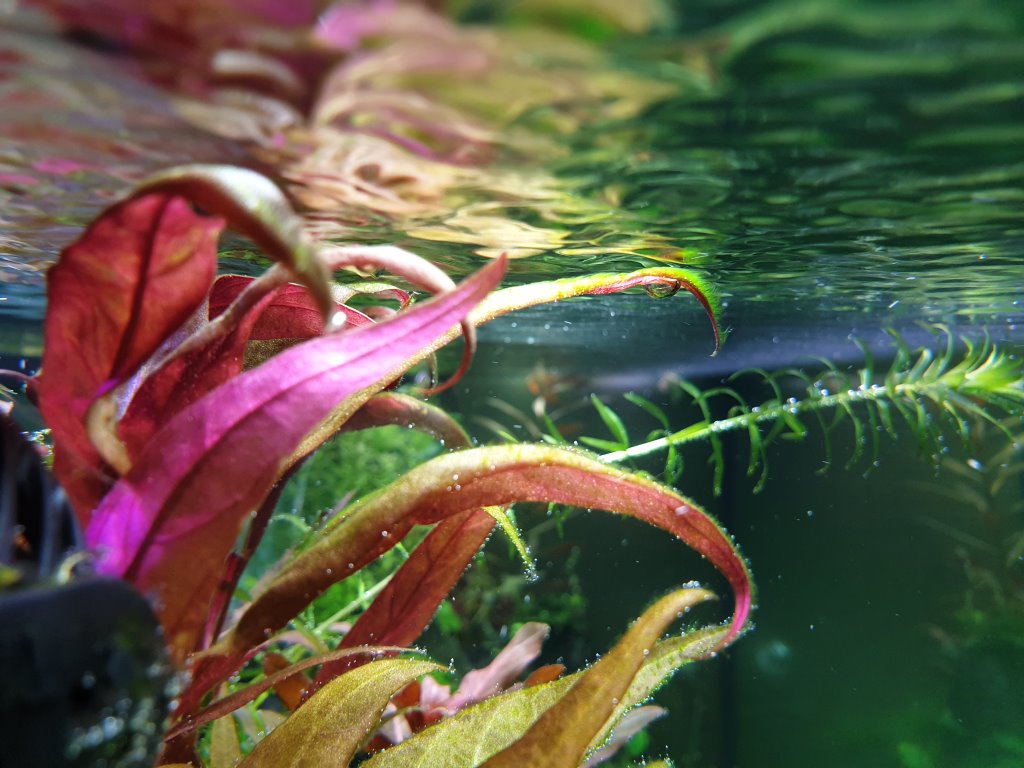 A closeup of the Aubias in the front lower middle of the tank, which looks to get an okay amount of flow according to the visible bubbles: 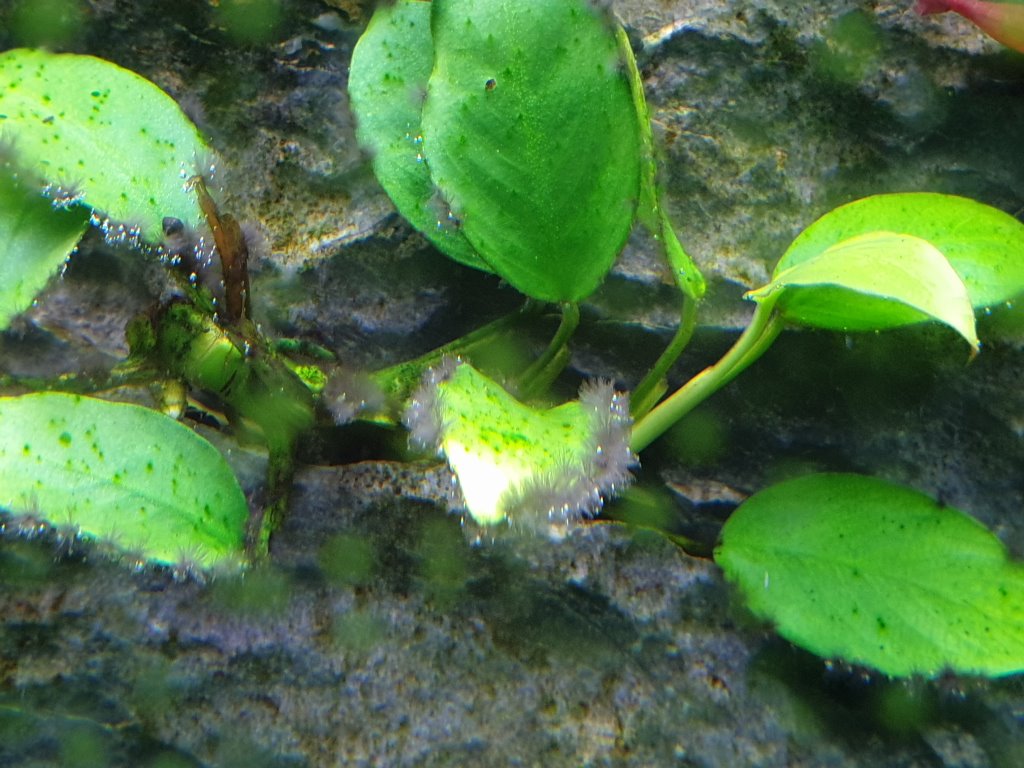 A closeup of the right side of the tank with very minimal algae for comparison (except the GSA on the glass, which is normal and caused by the young age of the tank I believe): 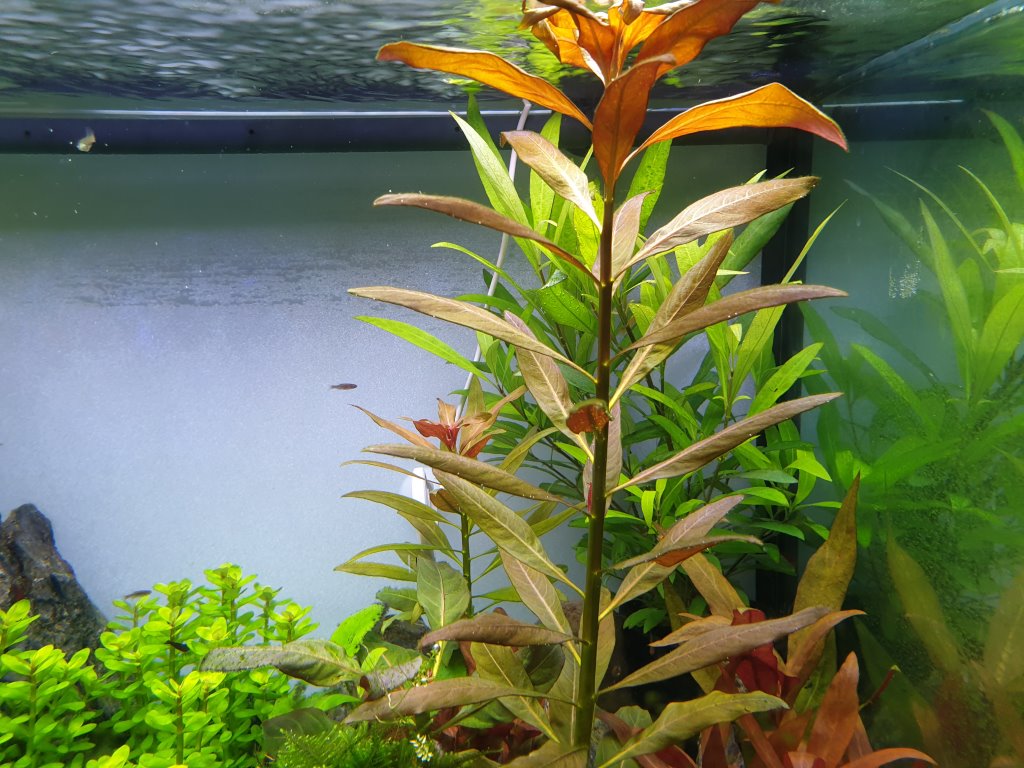 There are actually multiple ways to get rid of algae and the way I tend to think of it is in terms of: what goes into the tank minus what gets taken out = what causes algae.

What you put in is ferts, food and fish waste. And what you take out is what is siphoned out during water change (water, detritus etc.)

We also know that plants outcompete algae all the time if their growing conditions are right (sufficient flow+co2), so if you are an EI guy, nutrients (inorganic no3, k, p) are not the main cause and can be ignored from this equation, but if your tank is new you probably don't need any nutrients for a while.

So I would try cutting down on feeding and doing more water changes (really getting all the detritus out of the substrate and plants until you have zero ammonia). At that point what you put in should
= what you take out and the rest will take of itself.

Be patient and it'll be fine

Easternlethal said:
what goes into the tank minus what gets taken out = what causes algae.
Click to expand...

That's a good way to look at it I believe.


Easternlethal said:
if you are an EI guy, nutrients (inorganic no3, k, p) are not the main cause and can be ignored from this equation, but if your tank is new you probably don't need any nutrients for a while.
Click to expand...

Just to be sure I follow you, a lack of NPK can be ruled out as a cause of my algae? I am not dosing N and K,as the waste produces a good level of nitrate and I am not sure what level of K I should aim for and how often to dose (I know the plants can store K if it's in excess). As I have a mix of fast and slow growing plants (at the moment), I'd prefer the leaner method or something in between, ,which I know doesn't make things easier for me.


Easternlethal said:
So I would try cutting down on feeding and doing more water changes (really getting all the detritus out of the substrate and plants until you have zero ammonia).
Click to expand...

I am feeding once a day, only what's being eaten in 2 minutes and one day a week I don't feed but I will dial if back a little. I've had zero measureable ammonia from day one ,due to my (recycled) healthy and well-sized filter I guess.


Easternlethal said:
Be patient and it'll be fine
Click to expand...

I want to stay on top of this and do what I can to prevent it getting worse and out of control and so far, doing "nothing" seems to go in the wrong direction. But I get what you mean and so far I manage to stay out of panicmode

Thanks a lot for your response.

Lack of ferts can cause algae but only indirectly - e.g where plants are not growing but if you are not seeing plant melts or poor growth I wouldn't worry about it.

In my opinion adding K or MgSO4 can sometimes inhibit certain types of algae but not the type of algae you have.

Yes you can try dialling back feeding to every few days and cleaning the substrate and filter (not sure what you have there but cleaning it alongwith with water change will help).

Make sure flow and co2 is abundant.

Sent from my LM-V405 using Tapatalk

Easternlethal said:
Yes you can try dialling back feeding to every few days and cleaning the substrate and filter (not sure what you have there but cleaning it alongwith with water change will help).

Make sure flow and co2 is abundant.
Click to expand...

I'm gonna try feed less, I have at least 50 shrimps and almost 100 fish, so to make sure everyone at least gets some food, I'm feeding 3-4 kinds of food.
My filter is the biggest Eheim money can buy and it's only just enough for the tank size, but I don't have space for 2 pumps

Thanks a lot man
And thank you for your reply!

Fish only digest 10-20% of what is eaten and poop out the rest, which in nature gets eaten again and again so if a fish knows they will get food everyday they will prefer to eat that and the poop will be left to decompose. And since fish poop is small, it invariably makes its way below the substrate where algae and bacteria grows. This is why substrate surfaces can get mulmy with algae even though ammonia reading at the water column is zero.

What I would do is observe the fish behaviour to determine. If they are looking hungry, alert and constantly swimming around pecking at things then they are helping to clean your tank. If they are just floating around looking content then that's a sign of overfeeding. This applies to bottom feeders and shrimp also.

A tank with actively grazing fish will look completely different from a tank of full fish even though it contains the same fish.
Last edited: 24 Jan 2021

Easternlethal said:
A tank with actively grazing fish will look completely different from a tank of full fish even though it contains the same fish
Click to expand...

I cut down my feeding largely as one of a number of changes to combat algae and absolutely noticed this change in behaviour - The fish now actively root around the undergrowth looking for food much of the time.
W

Easternlethal said:
This is why substrate surfaces can get mulmy with algae even though ammonia reading at the water column is zero.
Click to expand...

Good point I haven't thought about that.

Thanks that's a good advice, and something I will be using as a guide from now on.
You must log in or register to reply here.
Similar threads