I finally got around to fixing my solenoid so I could put my pH controller online and control the CO2 a bit. Not really required to maintain the tank but saves some money on CO2 in my opinion. AFter taking the solenoid apart a couple times because it was passing, I finally figured out the actual problem. The outlfow orifice that the plunger seals against was corroded and irregular. I think the rubber on the plunger was a bit hard as well. So, I figured the CO2 must be passing through a small crack between the plunger and the orifice. I figured I could fix it myself using some silicone. The concept was to build a gasket surface onto the outflow orifice using tiny beads of silicone applied with a toothpick. Then I would form it into a continuous bead using the end of another clean toothpick. Here's the solenoid body after my DIY gasket: 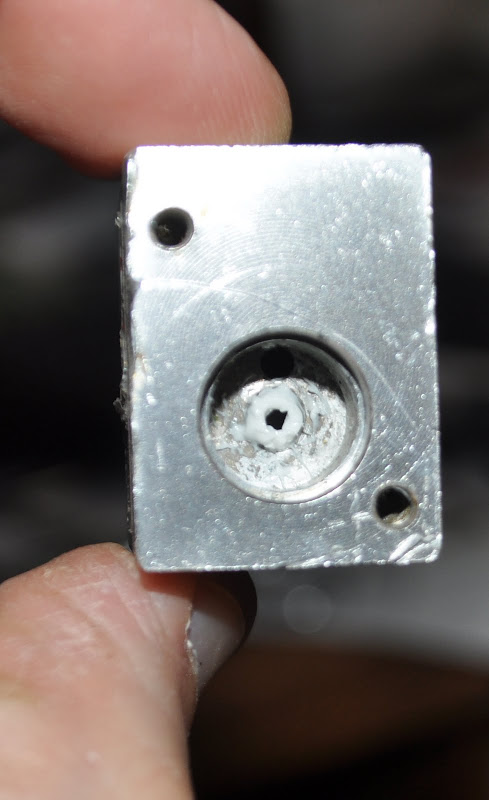 Put my regulator and solenoid back together after the silicone cured and it worked like a charm. My CO2 is back in action controlling from a pH of 7.2 (measurement after two days of no CO2 injection) to 6.7.

I've also changed around the drainage setup to quiet things down and provide full return pump output. Previously, I had only been draining without a siphon. My intention was to startup without a siphon drain until I got comfortable with how to set it up. Wanted to make sure 100% that during a power failure I wouldn't dump the tank on the floor. I also realized a setup without siphon was going to be far too loud and I couldn't maximize the flow from the return pump. The problem was that I needed to provide a setup to break the siphon in the event of a power failure. After seeing the Beananimal (sp?) design I decided that capping my ABS drain setup at the high points (http://canaquaticgardens.wordpress.com/2011/10/12/drain-system-plumbing-dry-fit/) and installing tubing into the tops of the cap I could setup a drain under siphon and the other drain as overflow with the capability to emergency siphon should the tank level get too high. Here's a couple shots of the new drainage, first the siphon drain: 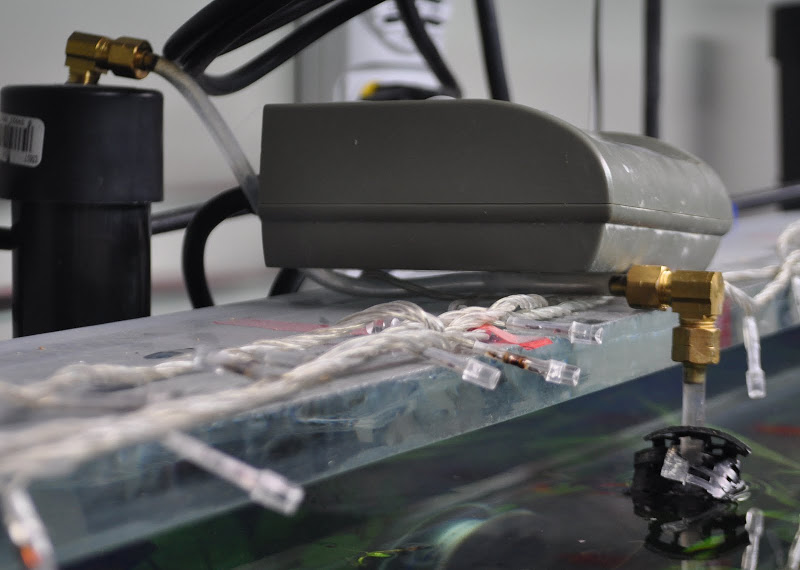 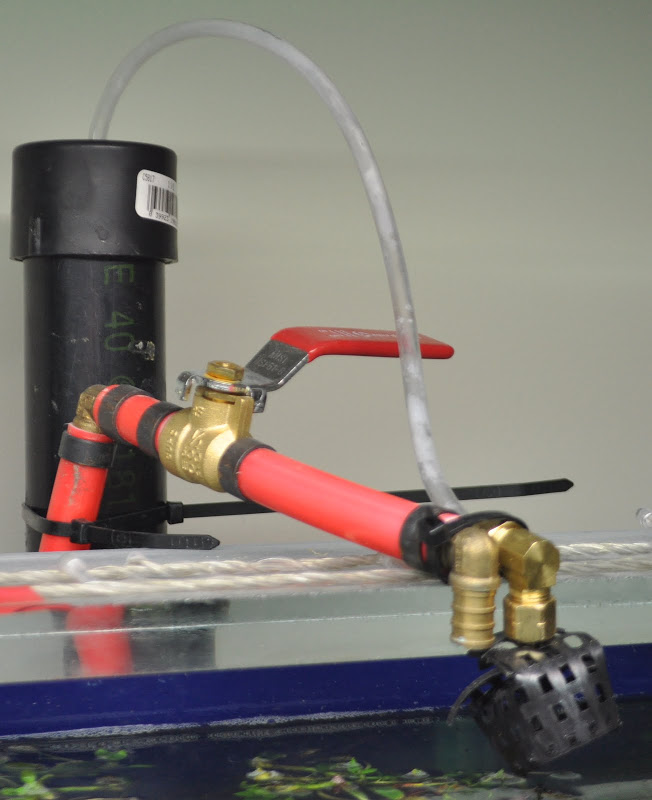 The guards are DIY made out of plant pots I got when I bought some of the plants for the tank. I tested what I figured were the full range of failure conditions and the tank/sump never flooded. I hoped I was in good shape and this is how the tank is setup today.

A couple notes on the plant care. I've been dosing every other day 3/4 of EI amounts of Plantex CSM+B, K and P. On the other days I've been changing 5% of the water, so roughly 15% per week. Prior to starting dosing I took one of the lights of for 6hrs, significantly reducing the total light to the tank. Now, about a week after dosing GSA growth is very low to none, diatom algae is very low and still receeding but hair algae has started in a couple spots. *So I figured I have a nutrient imbalance, and potentially a surplus from low lighting. So, I turned the light on that I had turned off a week ago and will continue the EI dosing. My current lighting setup is 0.7WPG for ~1.5hrs, 2WPG ~ 2hrs and 1.25WPG for 4.5hrs. Fairly low light, especially considering 3ft deep tank so I figured adding the light back in was the right thing to do.

Another note, since the dosing was started all plants have improved growth except the parva. I think they have been limited by the lower lighting so adding the light should help with them the most. I expect the rest of the plants will have a nice spurt as well.

Interestingly, after changing the drainage setup, I had a massive power failure at the host today. Out for 10hrs followed by 1 hour on and then 2 hrs off again. The setup held up perfectly. The only deficiency is that after a power blip, the sump pump will pump out about 15G of water and the return chamber in the sump will go to low level. The return pump will be pushing a bunch of air until you put more water back into the tank. Considering that a power blip is likely to be followed by power failures, I'm OK with this being the worst thing that can happen. I would much rather buy a new pump than a new hardwood floor. During the downtime, the tank dropped about 6 degrees which is probably going to stress the fish a bit.

Since the last update I've added some new fish. They aren't visible in this shot but I've added 6 albino corys, 3 bristlenose pleco, 2 clown pleco and 30 cardinal tetras. I've lost my albino bushynose pleco and an oto since the last time I updated this. The cardinal tetras have gone in the have been hiding in the back in the plants. They are eating but not much. The seem to be getting a bit braver and venturing to the front for food today though. *Here's the tank today: