Id be quite happy if I never saw them again!!!

Here's a pic of the hardscape from above ( with a couple of minor changes when it went from a dry run to the tank as it is now). 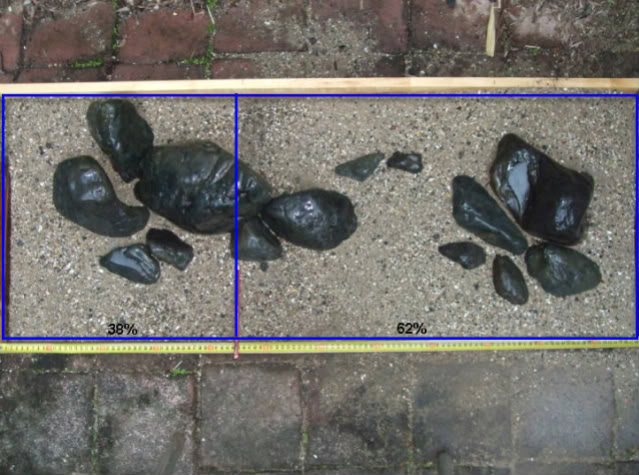 Nicky, Byron should be really sweet in 47 days time

Welcome to Ukaps, thanks for choosing a site on the other side of the globe.

Really nice scape, you clearly understand the rules of composition and have done well. Dont worry to much about the negative coments about your rocks, if anything, its getting the right reaction - a discusion. I think if you have a fidle with your camara setting and take more photo's you will have less probelems with high blues. Its possible your camara took the picture in Tungston. This will make any blues, really blue and the overall image quite cold to look at. Try shooting in AWB ( auto white balance ) and see what coments you get then.

I think you could make the stems work, but it would take some carfull and regular trimming, but still very achievable. Keep them behind the mother rocks and keep trimming them..shaping them as you trim, hopfully bushing out at the same time. It really could look quite nice.

I wonder wether droping some odd bits off moss in between some off the rocks, just to add abit more textrure?

Hi Graeme
Thanks for your feedback. I'll leave the photo issue aside for now but I will chat with you again on that later.

There's a few issues and ideas to follow up and I'll take them up one or two at a time. If nothing else, I've come to appreciate the benefits of patience and not rushing things when it comes to aquascaping (besides it's 6.20 am on Monday here, I've had a big weekend and the first coffee hasn't really kicked in yet

What do you think of the suggestion of removing the right hand group of stem plants altogether? Was it James who suggested it (I can't scroll back far enough)? I'm thinking that maybe the two groups are a little too symmetrical. Actually I might get back into photoshop today and remove them there first before I lash out with the tweeezers.

The trimming of the stem plants is an interesting issue. I have a nano tank with green Rotala sp. which I have trimmed repeatedly and it has thickened up beautifully and is starting to develop that horizontal growth habit.

I've got some notions in my head about this tank, which aren't fully realised yet, but it has to do with the idea of whether an Aussie native tank might be able to have some unique characteristics which differ from the norm.
For instance when I think of the Aussie outback landscape words like 'sparse' and 'ephemeral' come to mind. I'm wondering whether I can approach the stem planting and trimming in this tank with those notions in mind. I've never grown this Crassula sp. before but it's habit and shape already suggest some of those qualities to me.