OK, so I've added some of the Salvinia 10 days ago and I'm hoping that with that and the plant growth I can hold back the algae that started to hit early on. I've had to clean the sand and plants a few times and also doing 50% water change every 2 days and adding flourish excel to try and hold the algae back. One thing I think I've made a mistake on is having the longer piece of wood that stretches on to the sand as it now feels too big. It's there now though so it's going to have to stay . What I'd like to do is add something onto that piece of wood that blends it in a bit and takes away from the hard feeling of it. It would obviously need to be small. Any thoughts? I could go for some moss ot maybe some Anubias bonsai perhaps? Any thoughts appreciated 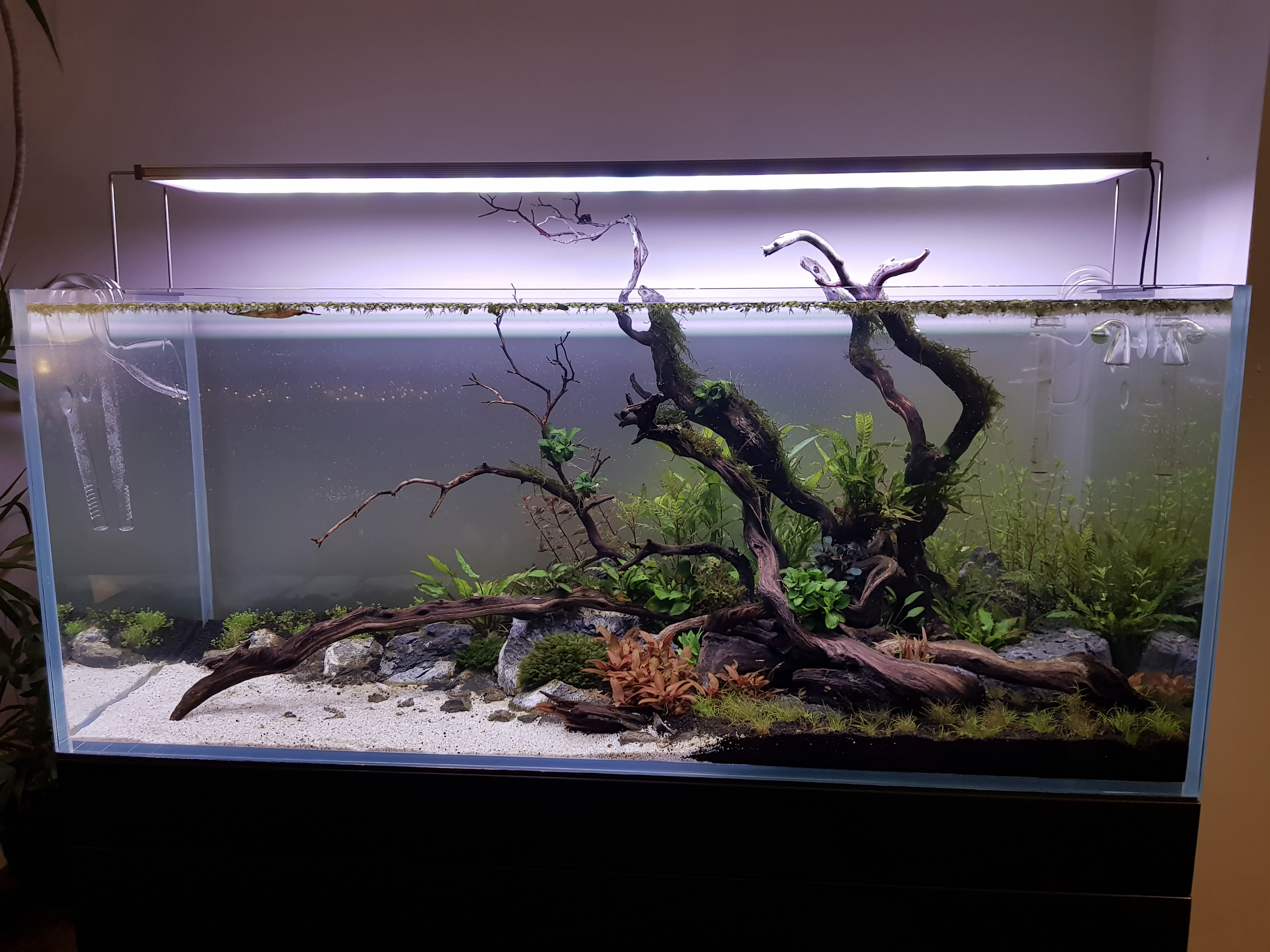 Another week in and 6 ottos and a bunch of Amanos added. A few more plants and the floating plants growing nicely keeping the initial small algae issue at bay. So the next decision is on the fish front....it will be a couple of weeks or so still but I'm tossing up between embers and cardinals to play against the green background and keep the scale. Any thoughts on what would work best? i did also look at Harlequins but I read a lot about jumping..it's a 120 x 50 x 50 tank for perspective. Any thoughts? 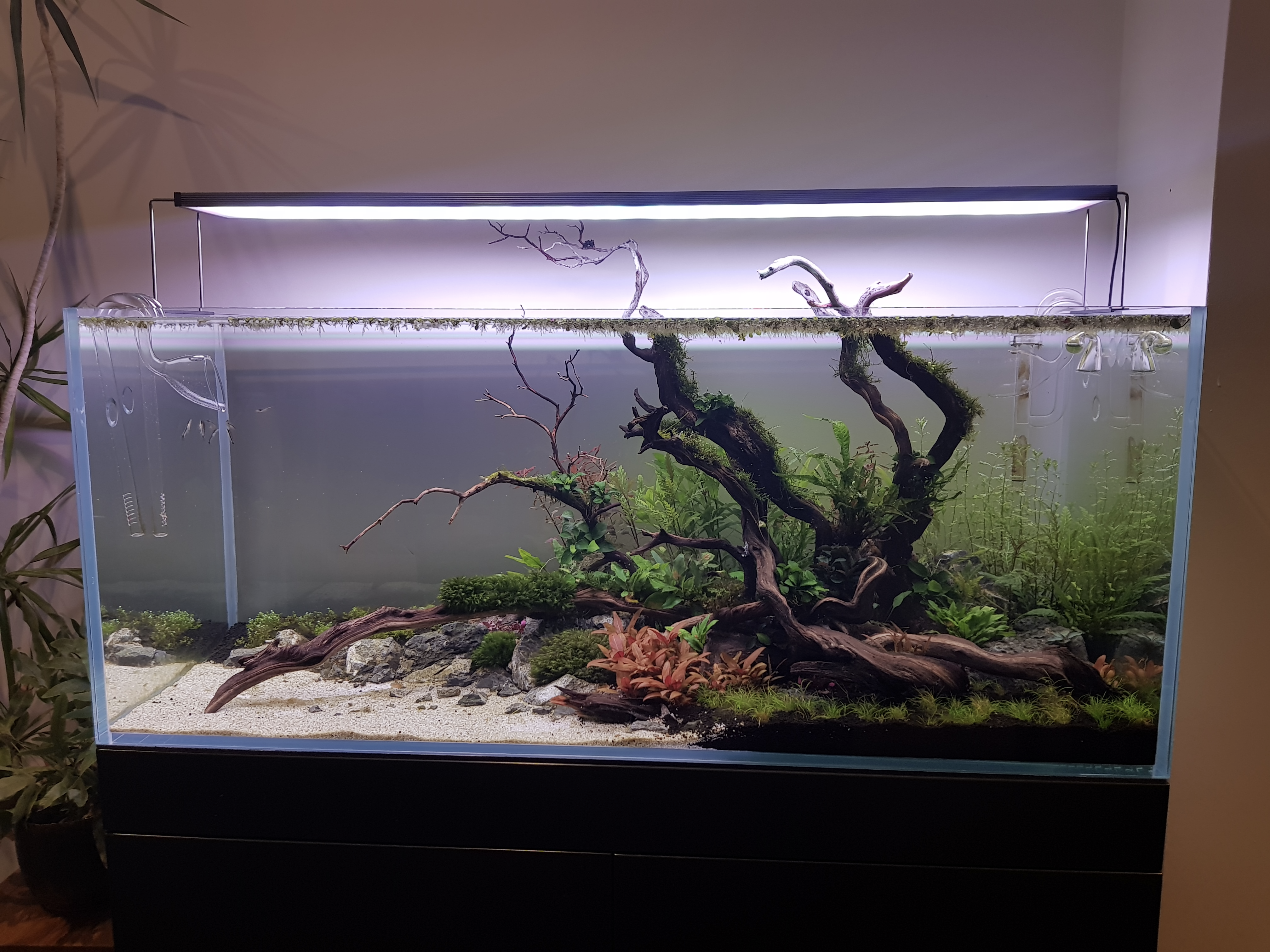 Afternoon folks, any thoughts on how many cardinals would work in here (300L)? I've picked up 12 initially and would still like to go with a smaller shoal of Harlequins. Are the harlequins really likely to jump that much?

Great looking tank Johnny. Looking forward to following your progress on this. I have the same size tank but have gone for centre island so will be good to see how both grow.

Am also interested to see the answer to your cardinal question. Before I scaped the tank out, I had about 35 cardinals in the tank with discus.
https://www.ukaps.org/forum/threads/300-litre-4ft-island-finally-planted.59475/

You could easily go with 40 cardinals and 20 harlequins, personally I prefer the espei rasbora and as they are smaller you could have more space for either more of them or more cardinals

Thanks for the input guys . @Mark Keetch yeh, this is my first build out so will be interesting to see how it progresses! I'll take a look through yours as well.

@Kalum thanks for the recommendation on the espei . I did actually look at those at the weekend as well and as you say I'd much rather have big numbers of smaller and the same fish to keep a sense of order and to keep the scale with the detail. I'm hoping my Amanos can start killing off the last of the algae as the little devils seem to hide all through the day!

A couple more weeks in and the plant growth is starting to take hold . Just waiting for the trident fern on the wood to start filling out and still keeping some filamentous algae at bay! One thing I'm not sure on is I have some HC back left but I'm not sure when to start trimming that. Do I need to think of it like moss and keep the trimming pretty hard as it's growing updwards at the moment. 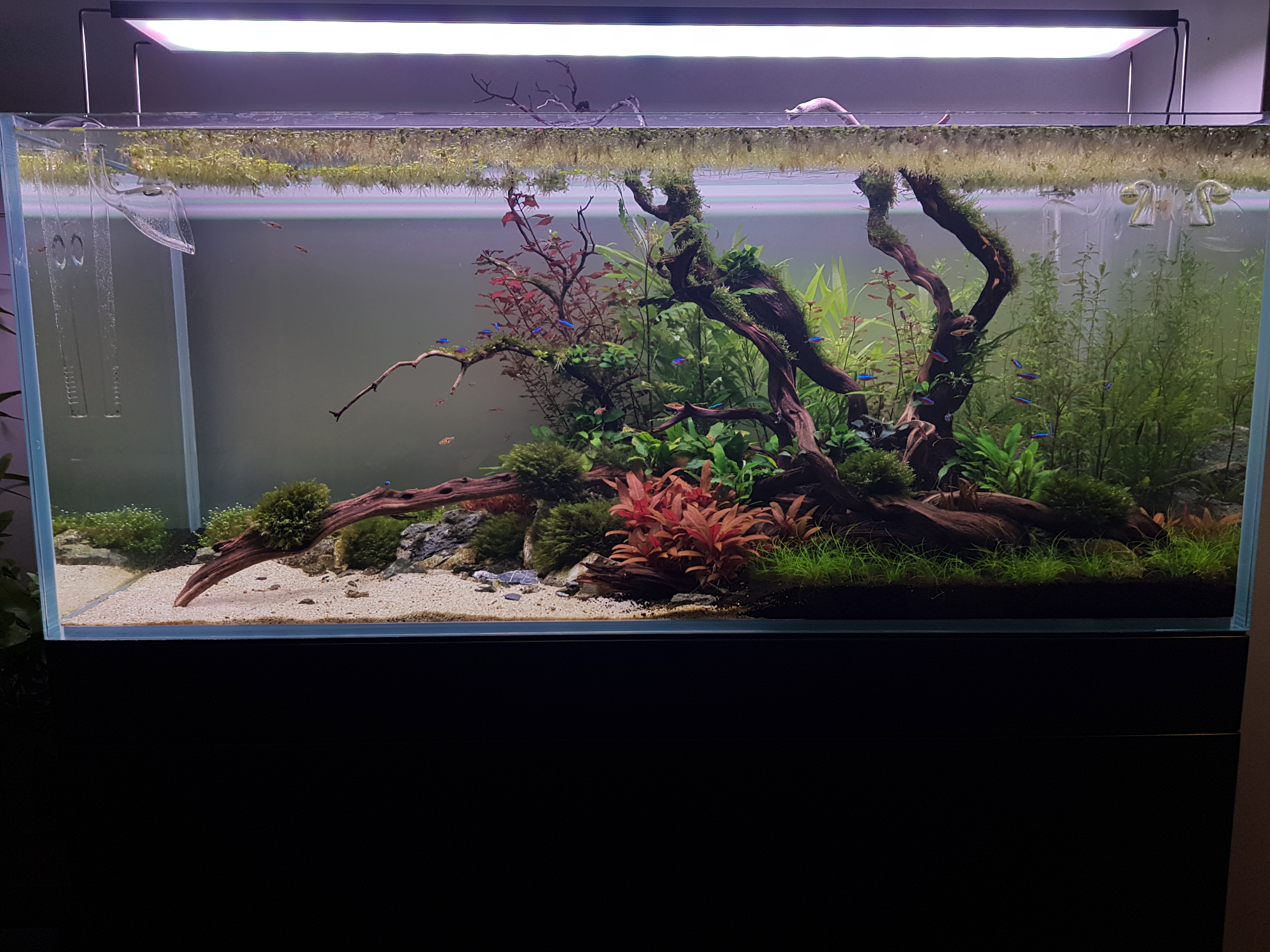 Evening folks, I've made a few adjustments and added some stone back left to give a bit more balance and interest. I was thinking of either some low stems or maybe something like Valis nana behind the back left stone to soften the edge and add a touch more height (maybe only to a few inches above the rock). Any other thoughts as to what might work there or do you think I'm just better to leave it with the cuba growing around it only? 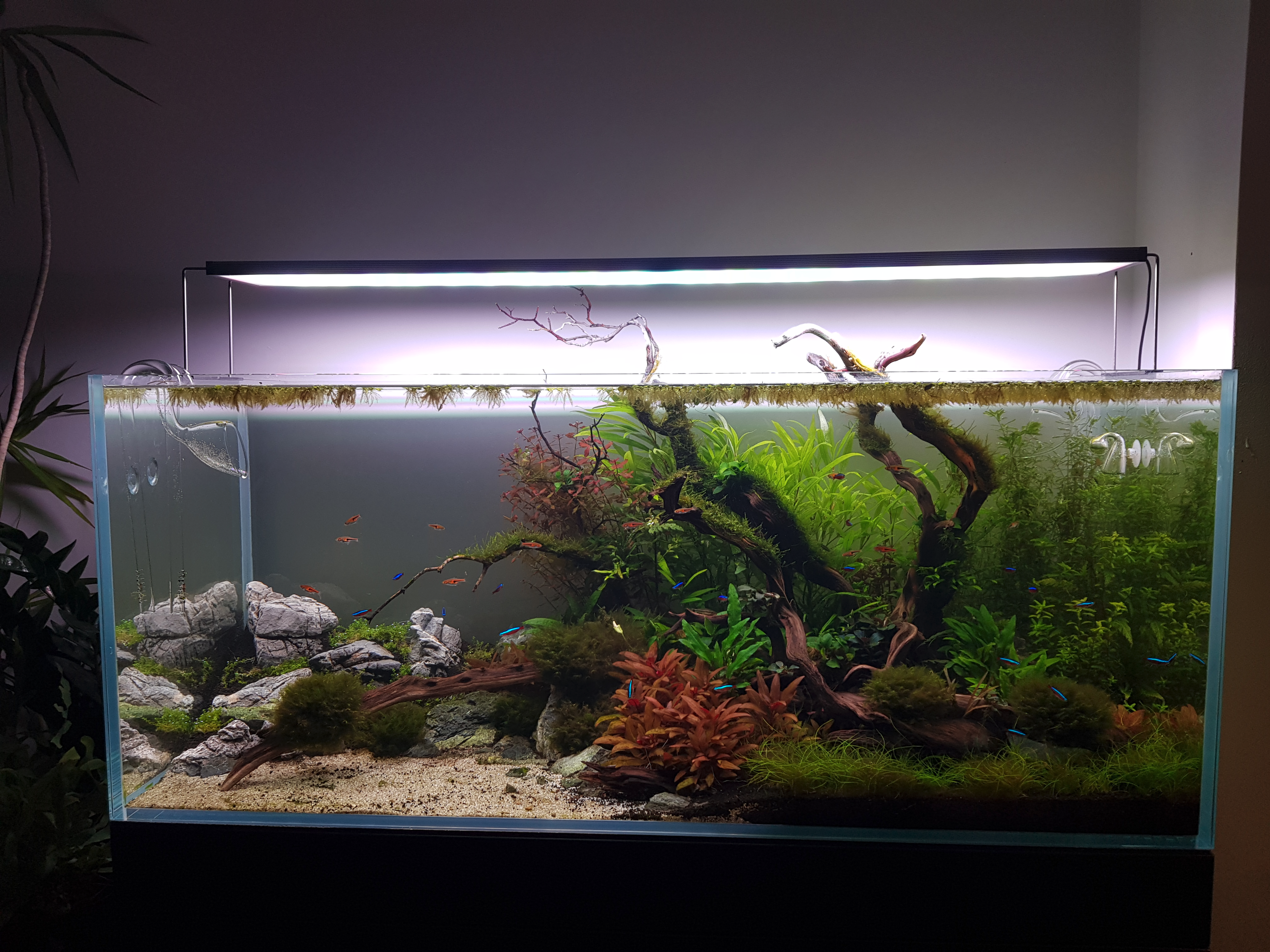 Hi @colmans tank looks really nice I'm nott sure about the rock back.left against the glass looks a bit unnatural IMO I dont think you need stems there will take away that bit of negative space that draws your eye along and around the rest of the tank. As you trim and it fills in more and more you will appreciate the space more maybe more moss on the long harder wood you was talking about would help to soften it and would be a nice contrast to the hc
It's a great first attempt mate really nice

Thanks @Jayefc1 yep that was the idea with the wood and the moss as you say to create that flow. I actually had some moss that was sitting on the some of the wood bottom right that was supposed to be on the longer wood! I've moved that now to hopefully create more of the flow from the wood bottom right along those lines and to help create that contrast as you say . I'll be adding a bit more moss to the end of the thinner piece of wood on the left as well to give that a bit more prominence as it breaks into the negative space. That rock doesn't look quite so out of place in the normal view (pic makes it look a bit more isolated) but I can see how it will can feel out of place for sure. Good thing is I can lift that out pretty easily . New pic with the most moved from bottom right to the wood on the left which I definitely think creates more flow . Thanks for the input! 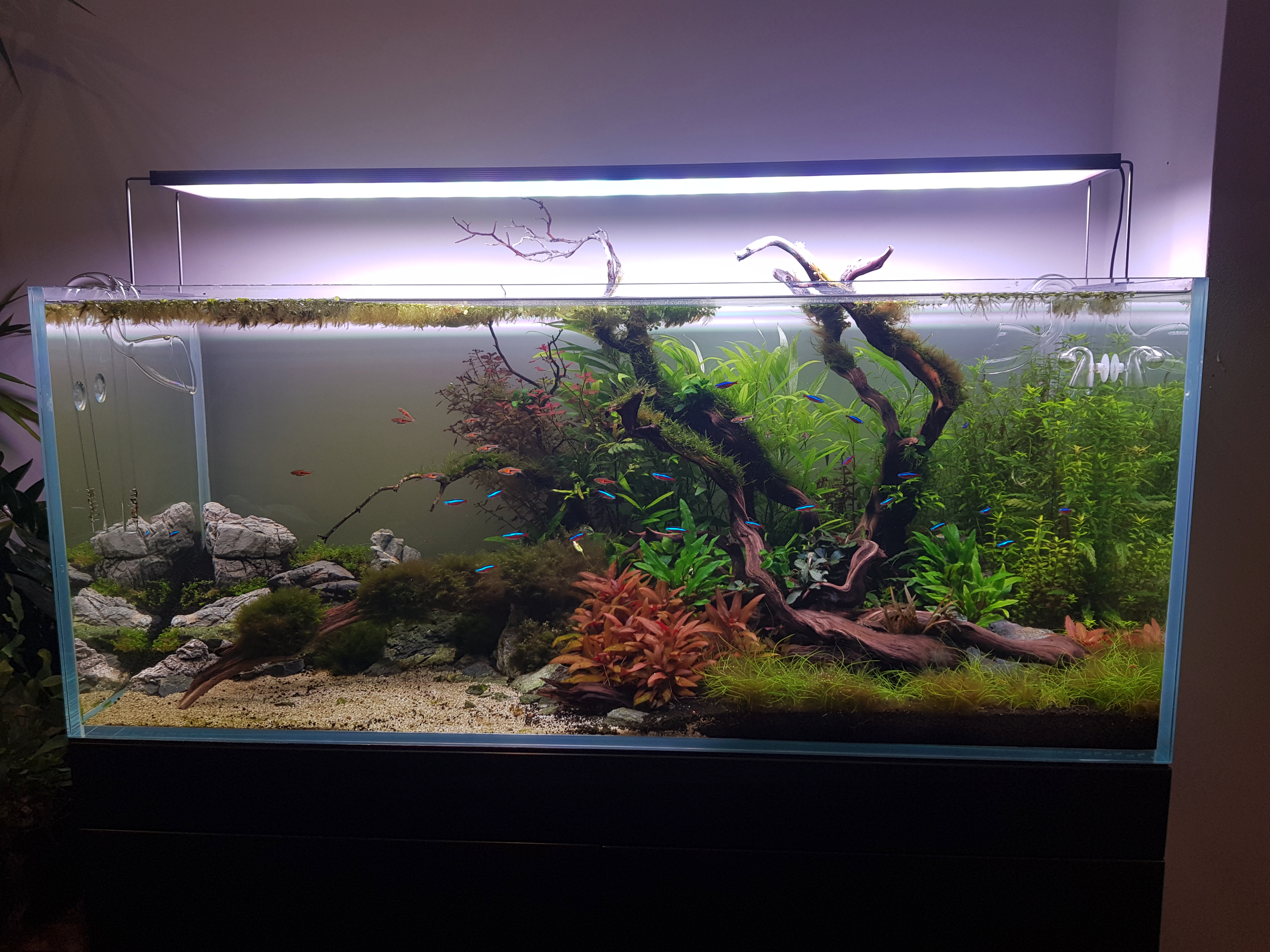 Yeah I think that looks better makes the wood feel.cleaner on the bottom right too

I can see what you mean pics always look diffrent to how your viewing it from.diffrent angles so maybe the rock isnt so unnatural from your viewing point

Either way still a lovely scape

Been a while since my last update post . Slowly getting on top of the algae issues with still a bit of BBA around that I'm trying to keep under control. Growth is coming along now and I've added some more wood front right for hopefully a great sense of depth (doesn't quite come across in the pictures!). I do have a few horned nerites in here but I'm still struggling a bit with the algae on the rocks and I think that's because it can get some sunlight at that end of the tank in the mornings. Is my best option here just to up the nerites in the tank? 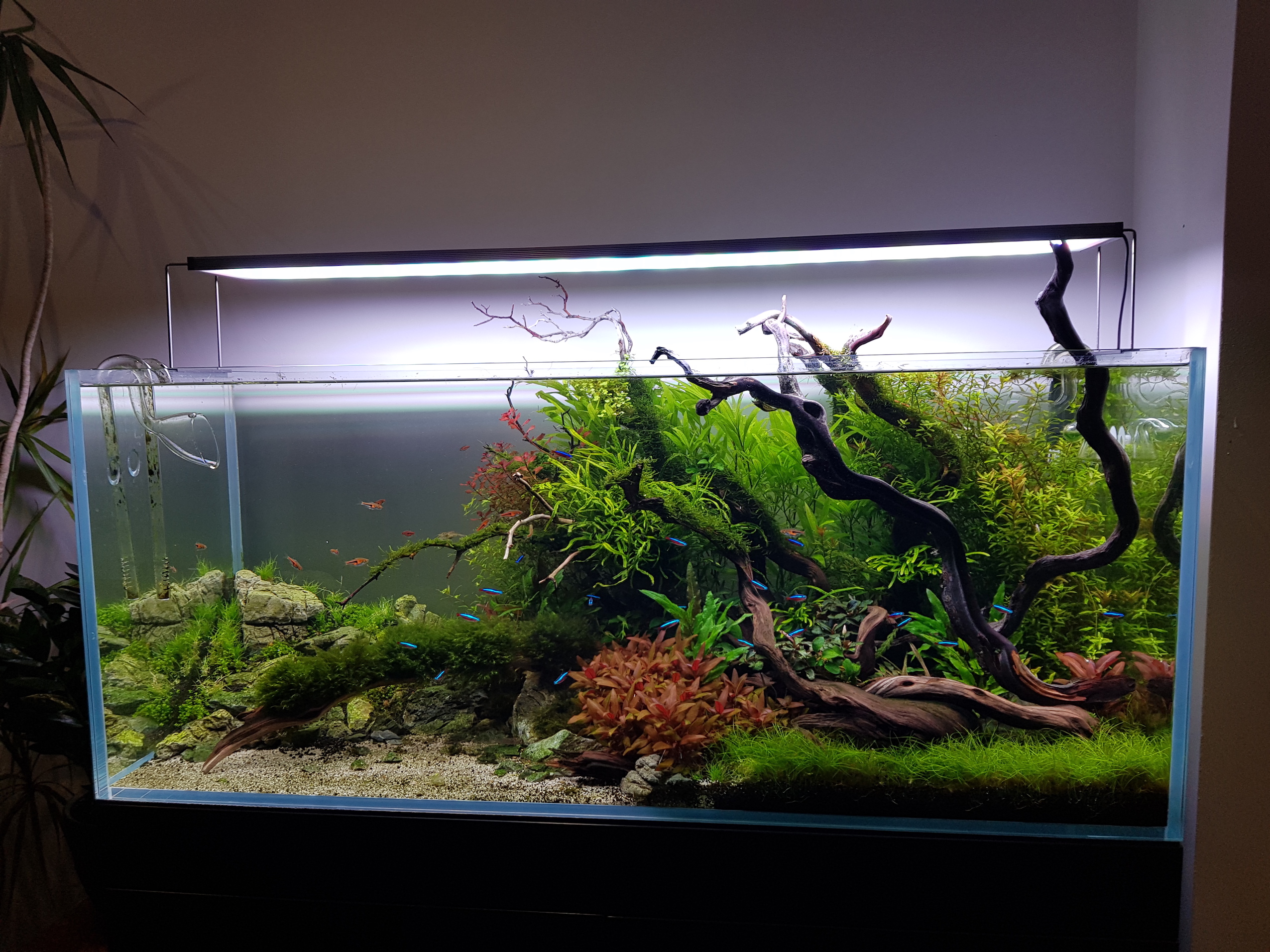 Nerites may help with your algae but it's a balancing act of having enough to eat the algae versus having to many that might starve when you reach full plant growth (with associated nutrient control). If you think it's because of the extra sunlight then I'd consider using a temporary shade in that area for a week or two just to see if the reduction in direct light solves the problem first.

Really liking the aquascape, nice flow of the wood and that left rock placement create nice tension, would love to see an frontal pic?

as for the algae, nerites may help, but that green on the rocks is mostly due to Lack of nitrates and/or excess of phosphates. Direct sunlight won’t cause algae

There is no proof excess phosphates induce algae in a well planted tank.
Ammonia will though...

@CooKieS I think these ones are more frontal after the weekly clean up today . Photography needs brushing up on for sure! Thanks @mort I did try a shade previously which did seem to work. So I'm thinking that maybe I need to keep the balancing going and more plant growth should hopefully see that algae recede? 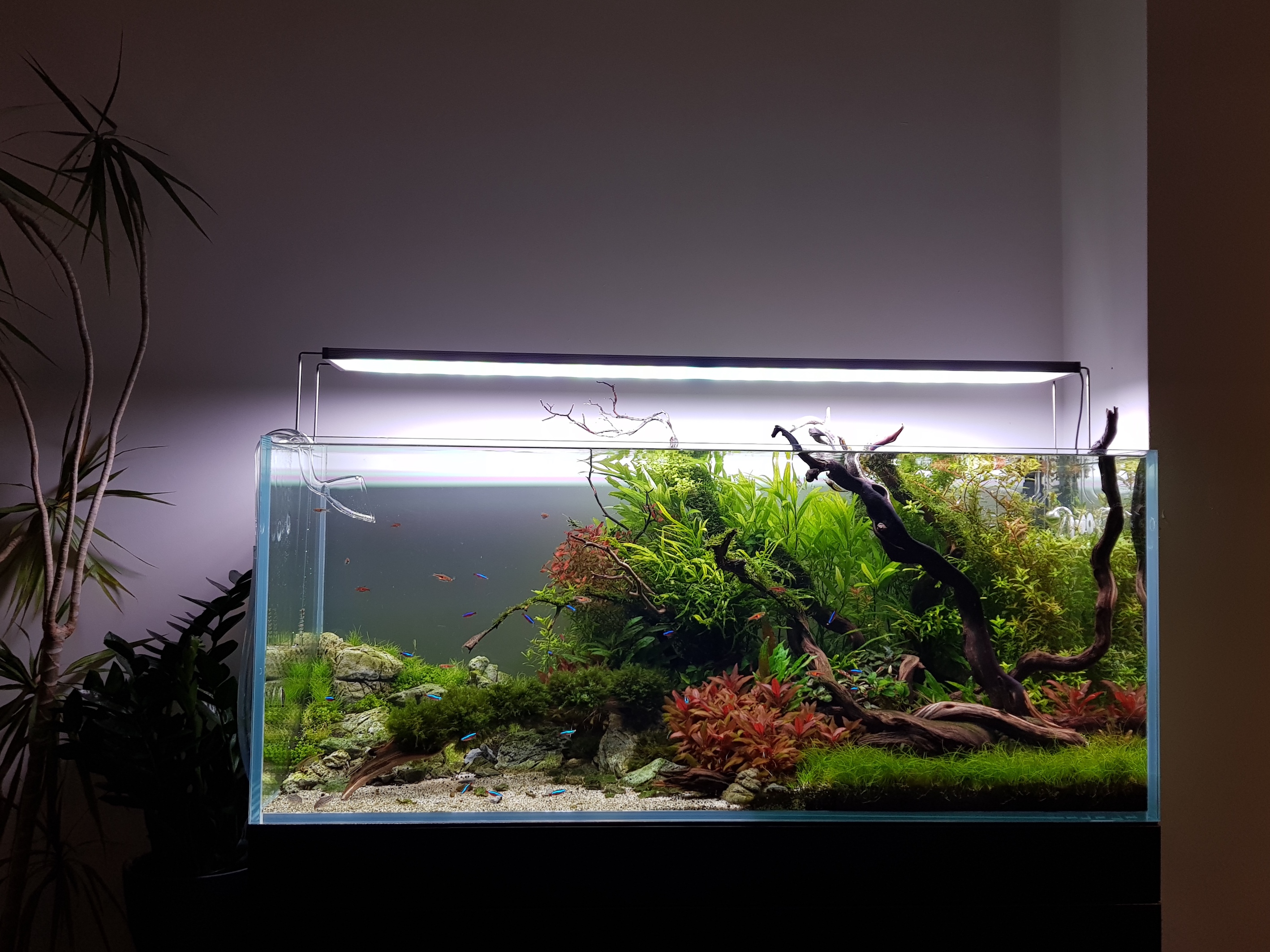 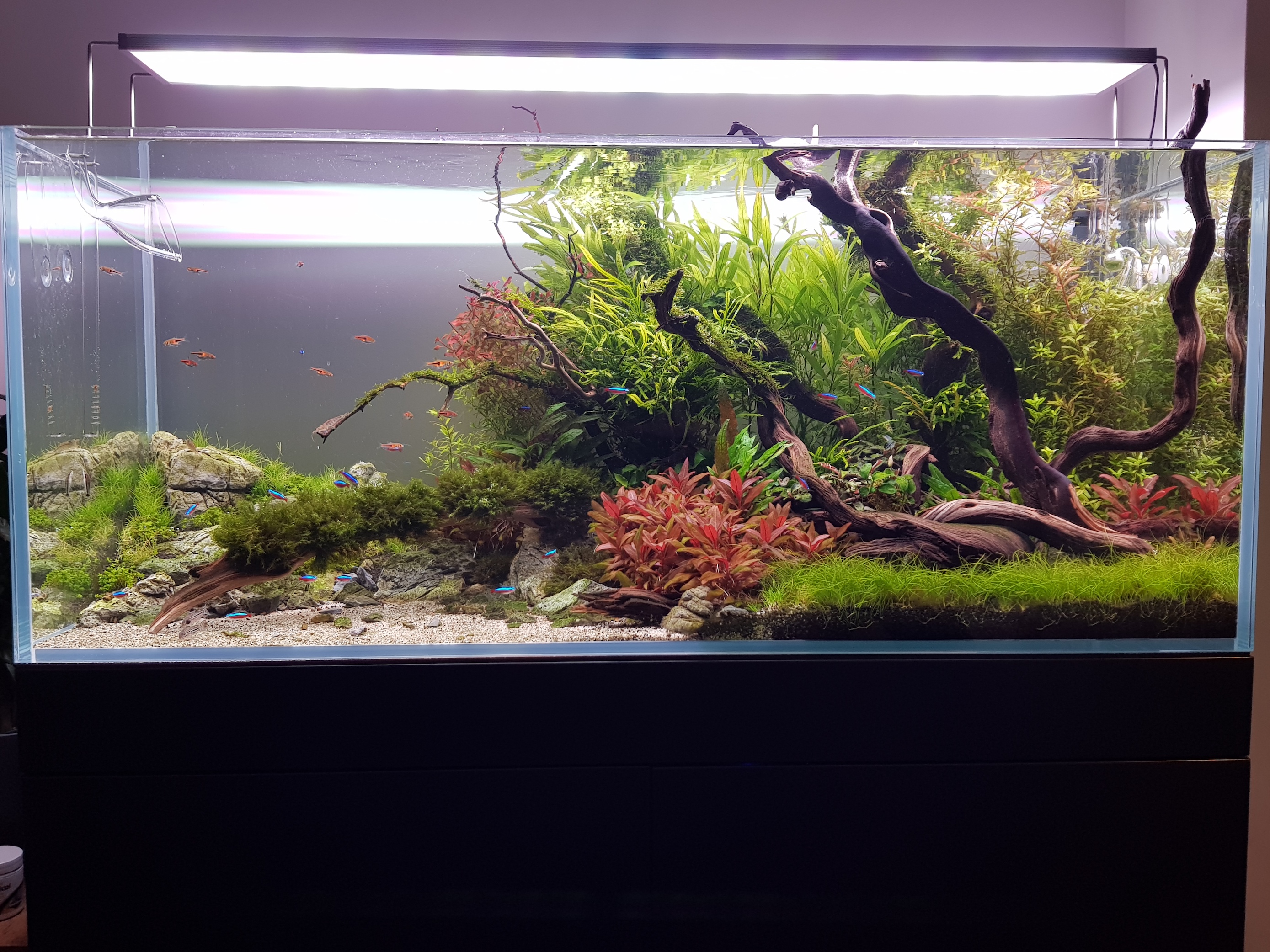 colmans said:
So I'm thinking that maybe I need to keep the balancing going and more plant growth should hopefully see that algae recede?
Click to expand...

That would be my advice but from your pictures I'm seeing just a light greening of the rocks which to me makes it look more natural. If the algae is worse in person or its not a look you are going for then you might find upping your clean up crew a little will help in combination with plant maturity.

Andrew T said:
There is no proof excess phosphates induce algae in a well planted tank.
Ammonia will though...
Click to expand...

Of course, I wanted to say too much phosphates and not enough nitrates , not good balance. (Sorry for my English)

Might be worth checking and cleaning your filter too

i really like the fts, nice scape! Do you have any cleaning crew in there?

It's been a while since my last update! The tank has grown in pretty well and I'm now trying to cope with an outbreak of cyano. Any tips on killing this off? I've also got an annoying outbreak of small snails which are a pain in the backside to clear out. Tank needs a little trim now but one thing I've learnt is that patience is the key. I don't think i planted heavily enough to start with but I'm now at a nice balance on the plants. If someone has a golden ticket to clear cyano out any help greatly appreciated! 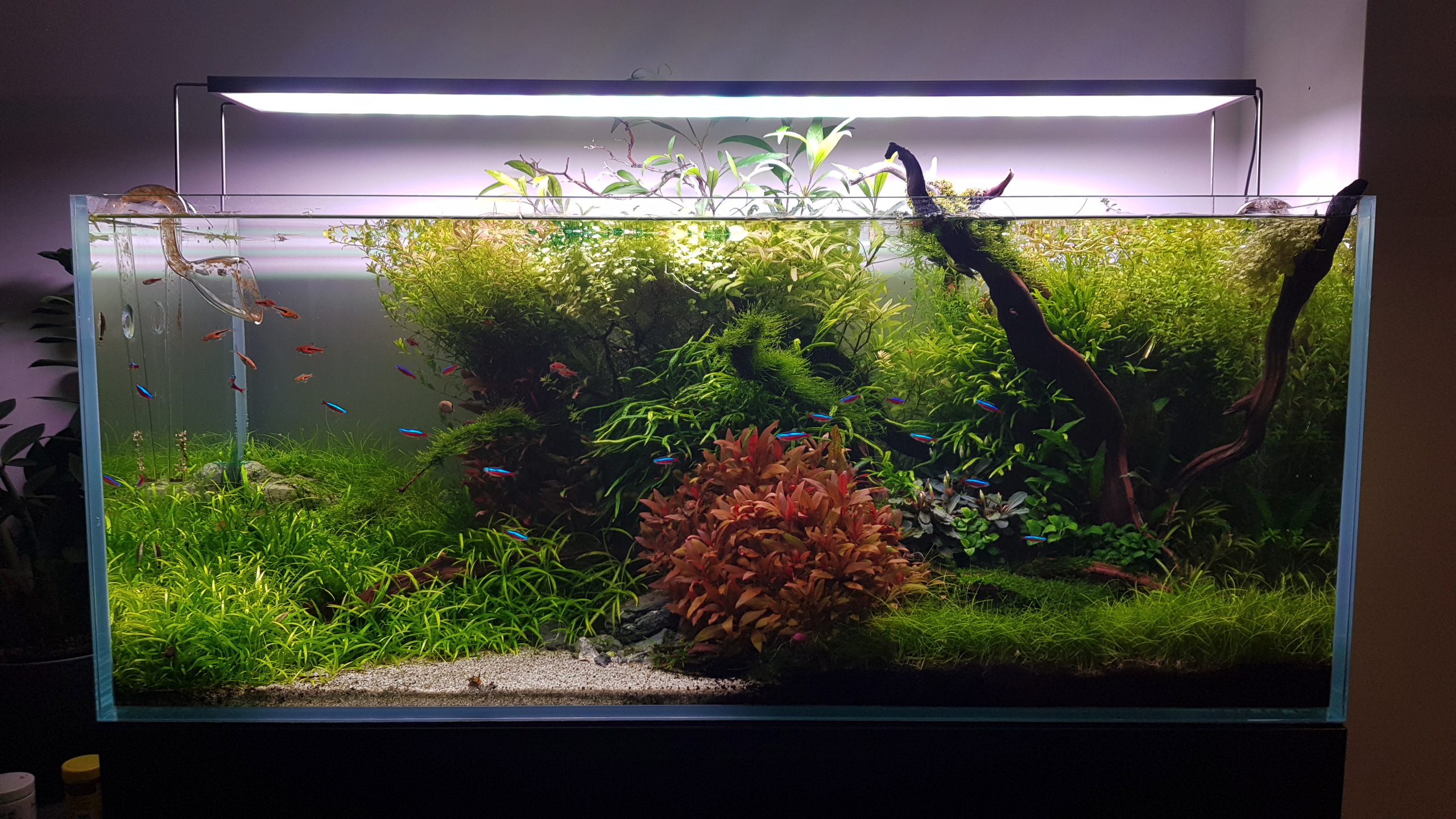 And a little trim: 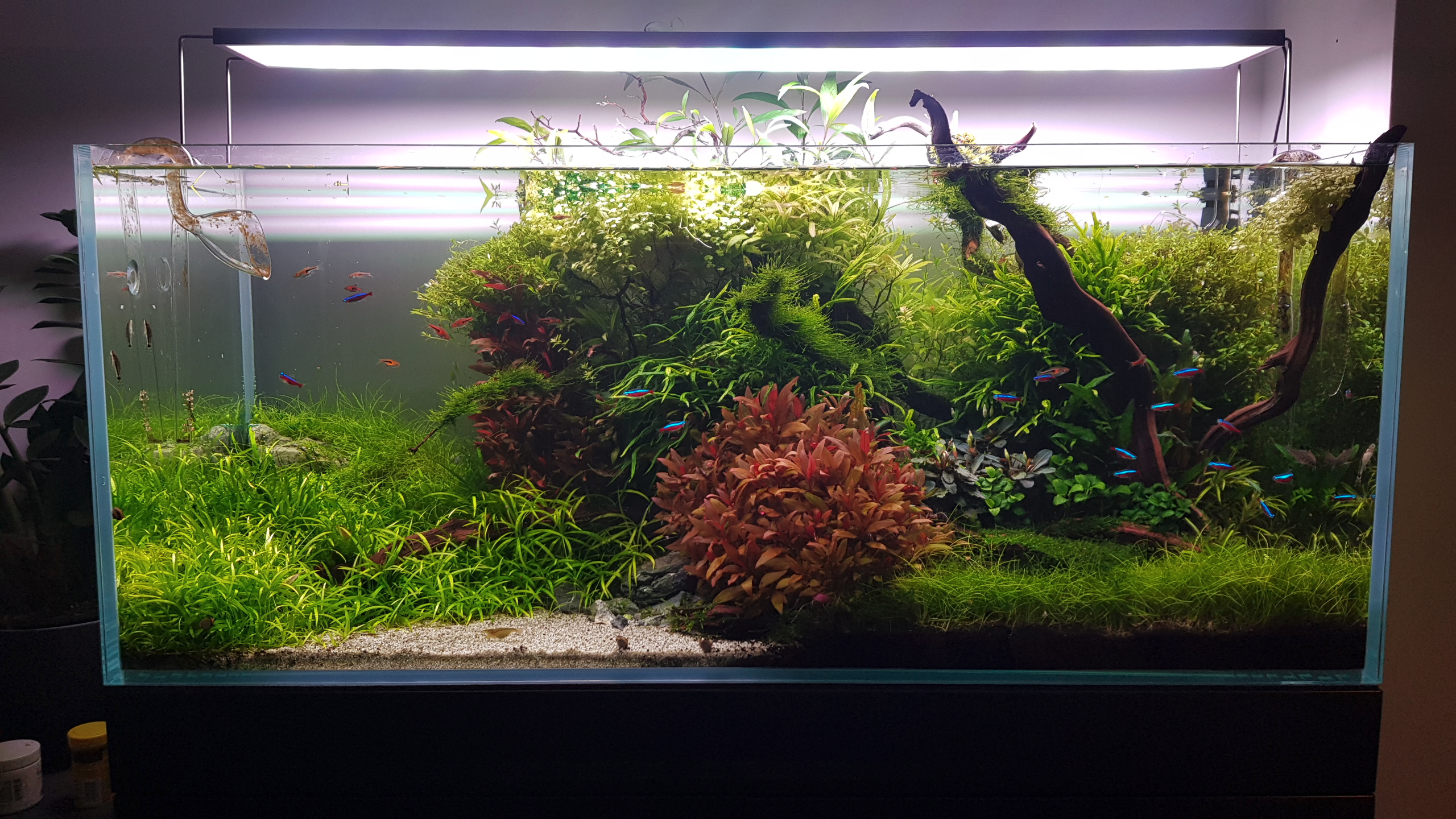