Appologies for the poor quality of photography

I forgot to explain the bowls in the top right corner but I'm sure you guessed - the wood floated just as I was filling the tank. Since I had a bucket on my shoulder and pipe in both hands I had to grab the first thing I found!

I have some buce melt but to be honest they don't look much different to when they arrived, hopefully they recover. Some ludwigia didn't like my planting, they also floated. However, I do think that was due to the fact that they had a pathetic root structure. I've left them to float and they are certainly growing decent roots already.

Frogbit roots are growing like mad too, but new leaf growth seems to be mottled brown? Can anyone explain why? I'll add a picture.

I also have some kind of haze around a few Anubias leaves, is this just some melt or can I do something to help? Don't have a good enough camera but it looks like about 1mm of bacterial film on the light-facing side.

Overall I'm quite happy, awaiting diatoms, doing water changes and dosing carbon and ferts. Tannins are leaching so it's a bit yellow.

Any feedback really appreciated. I have done a few water tests but am confused about them and will start a new thread in the appropriate forum. Full tank shot to finish... 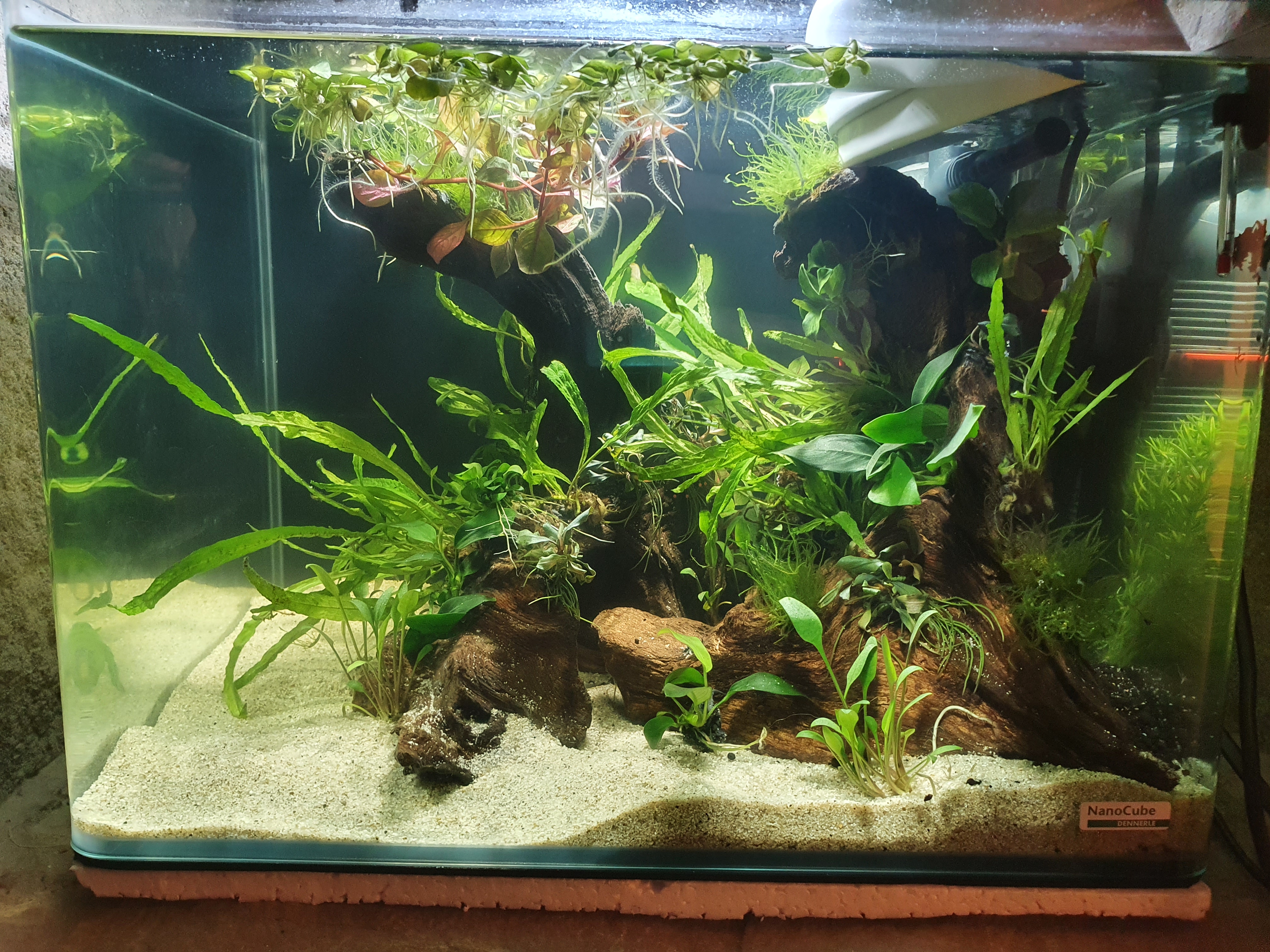 DTM61 said:
Frogbit roots are growing like mad too, but new leaf growth seems to be mottled brown? Can anyone explain why?
Click to expand...

I had that on my frogbit too when I started my scape a couple of weeks ago. They're now settled in and are producing unmarked foliage. My best guess is that the marked 'new' leaves were actually already there as tiny embryo leaves when I got the plants, and the brown markings are due to them trying to adapt to the sudden change in growing conditions. The genuinely new growth hasn't had to adjust, and so has been fine.
But that's just a guess!

One week quick update. Wood has sunk and bowls have been removed. Water is staying clearer of tannins longer and the bacterial bloom has also cleared.
On the downside, whilst doing a water change I've managed to cook the pogostemon 😣. Obviously didn't give the heater enough time to cool down before draining so the small pool of water containing the pogo must have gotten too hot. Some tips are still green, the rest is white. Stupid mistake. 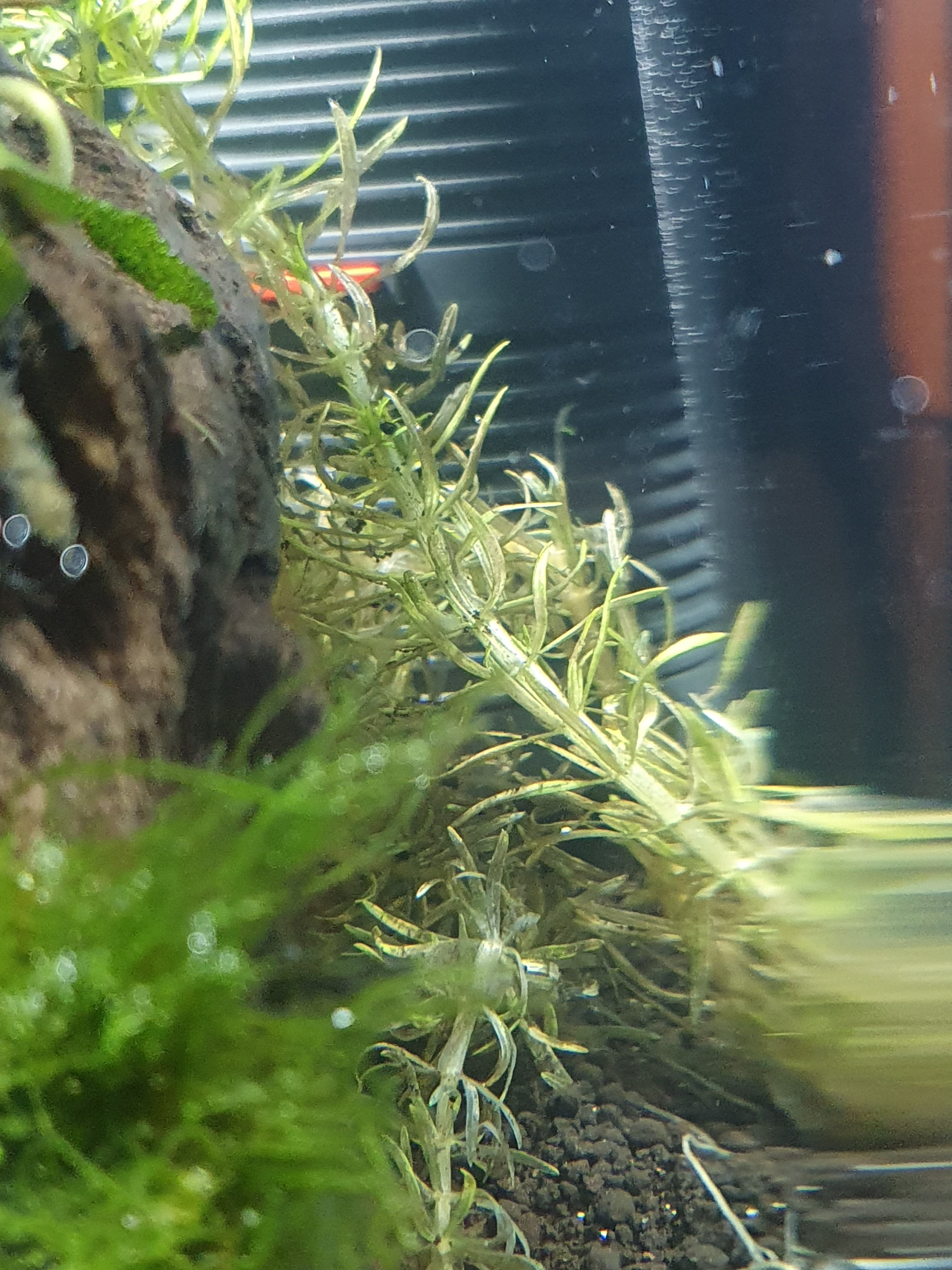 On the plus side everything is visibly displaying fresh new growth, the ludwigia is probably doing best, even more so now the water has cleared. I will leave it to nearly reach the surface before trimming and replanting.
Cheers all 👍 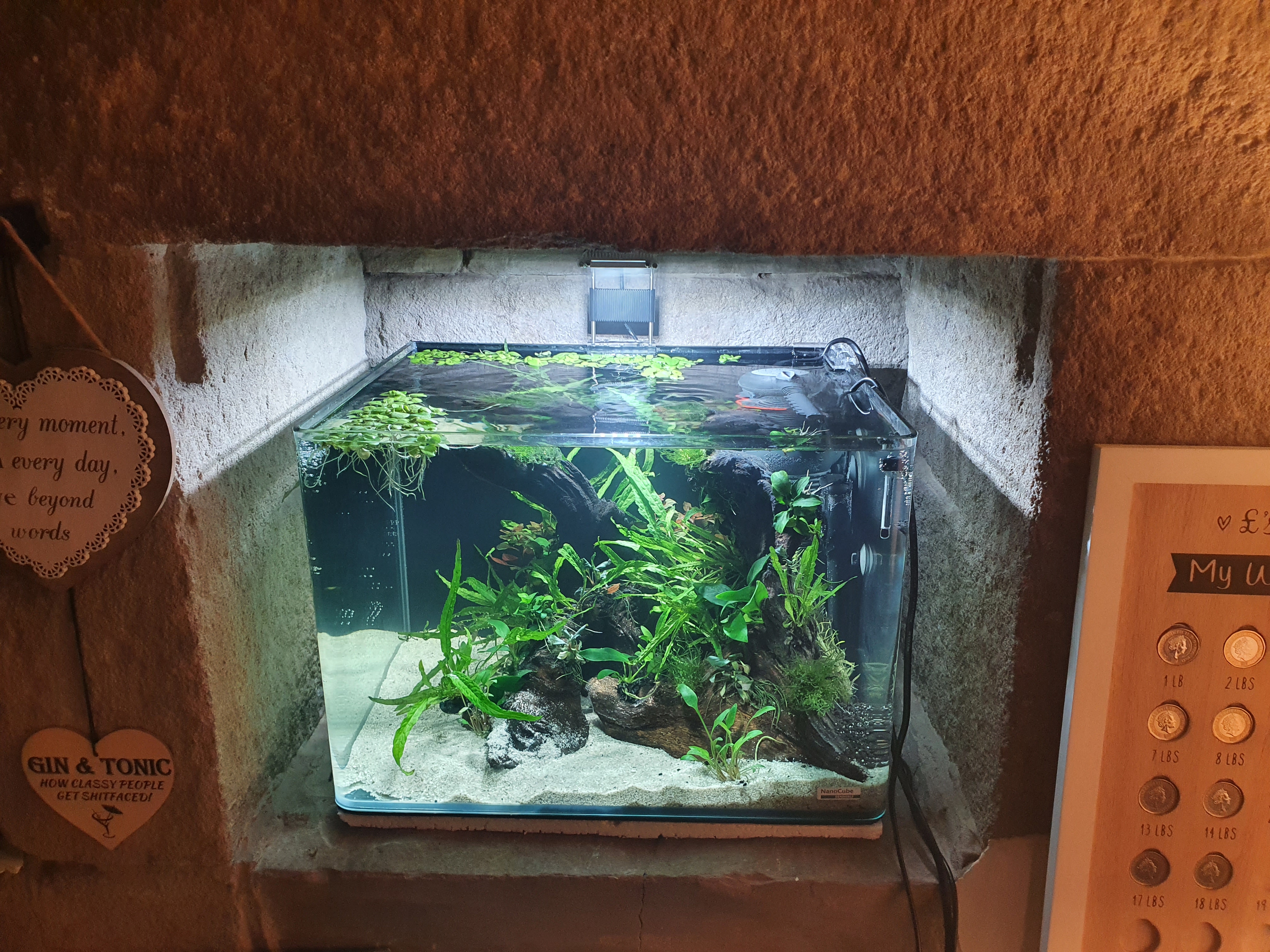 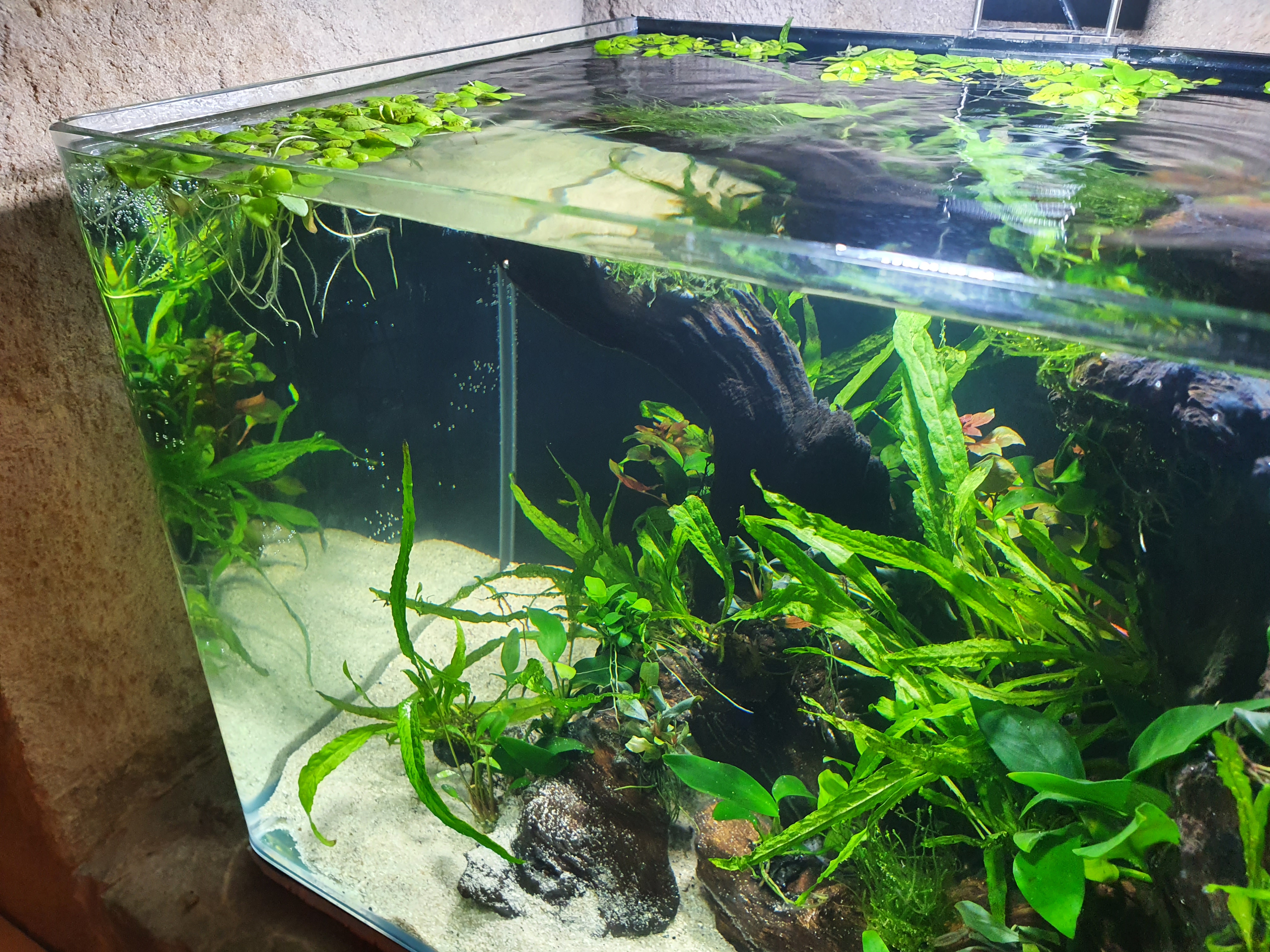 Looks really nice How have you separated the scapers soil from the ada la plata? Am interested in using the two types in a scape myself but don’t want them to mingle if possible.

Zeppo said:
Looks really nice How have you separated the scapers soil from the ada la plata? Am interested in using the two types in a scape myself but don’t want them to mingle if possible.
Click to expand...

I just put the soil in the back right quarter and used the sand for the rest of the tank. Separated them with the wood, pebbles and filter floss in a couple of gaps between the two.

Thanks Dan, I will give that a try.

Bit of a quick update. I added a few hasboras corydoras which seem happy and getting chubby, your thoughts on whether or not they're getting too chubby would be appreciated. I seem to be a bit of a feeder! 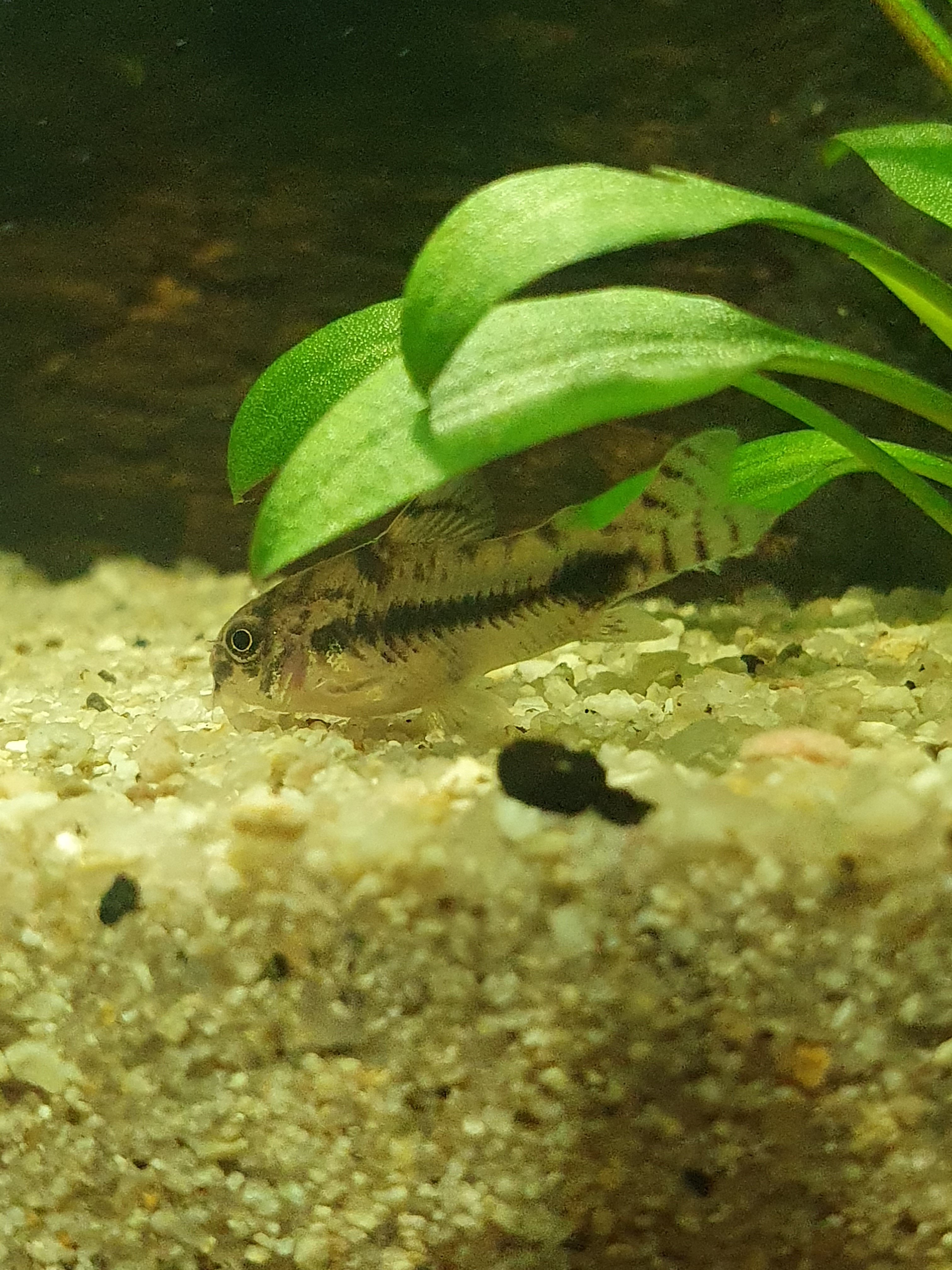 All plants growing well but I had some slimy brown algae developing, particularly on the moss at the top. I've moved a java fern to let more light in and done a trim as moss was a detritus trap and changed from a short spray bar on the right to a long one along the back. Next week I may add a nerite snail. 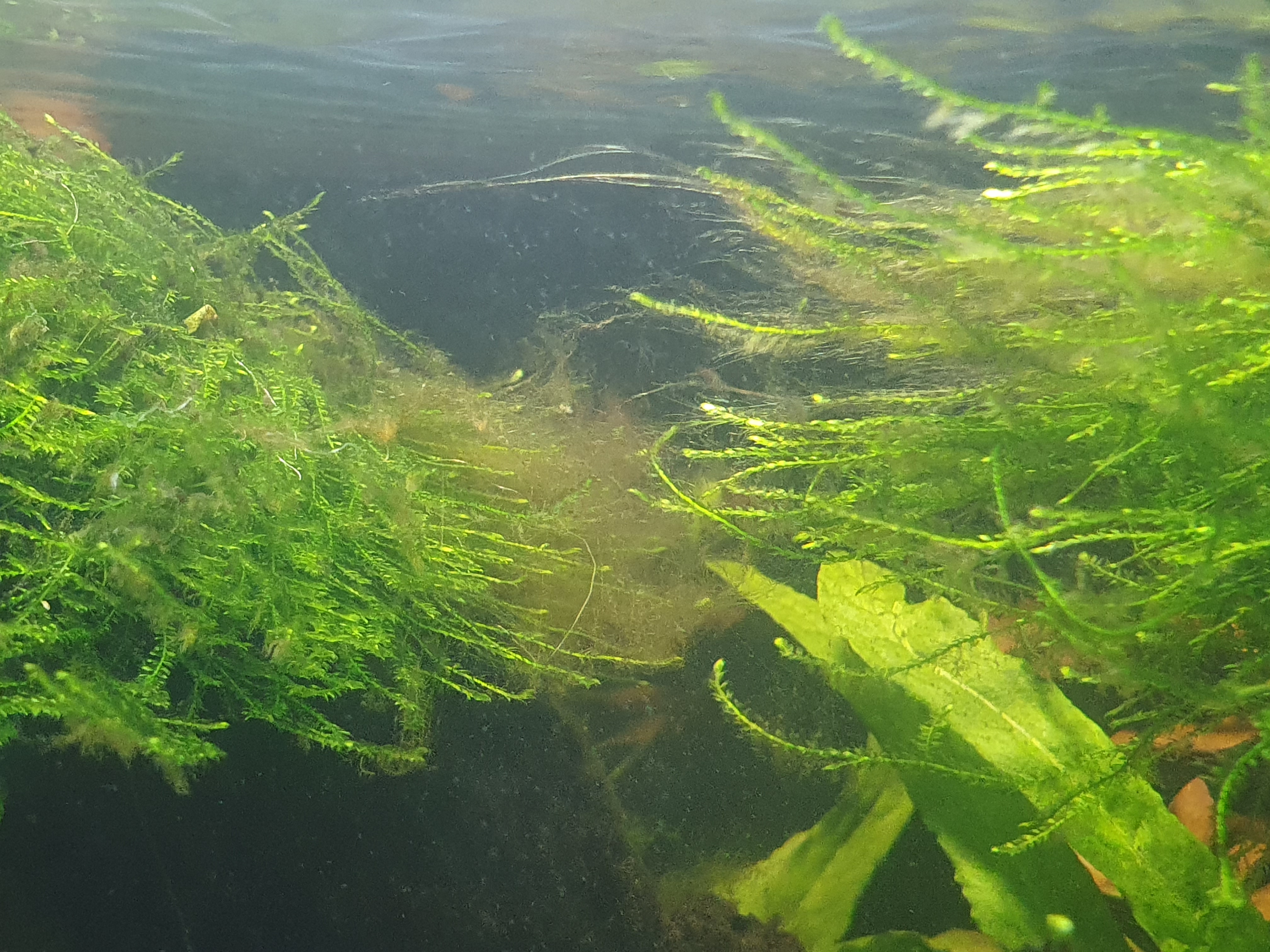 Giving away a tropica pot of Frogbit per fortnight and a few stems.

I have a few questions again...

1. My Frogbit grew very long roots which then got mucky and broke away but then were replaced with very sturdy vertical roots with few fine hairs. They're now growing longer and hairier again - that normal? 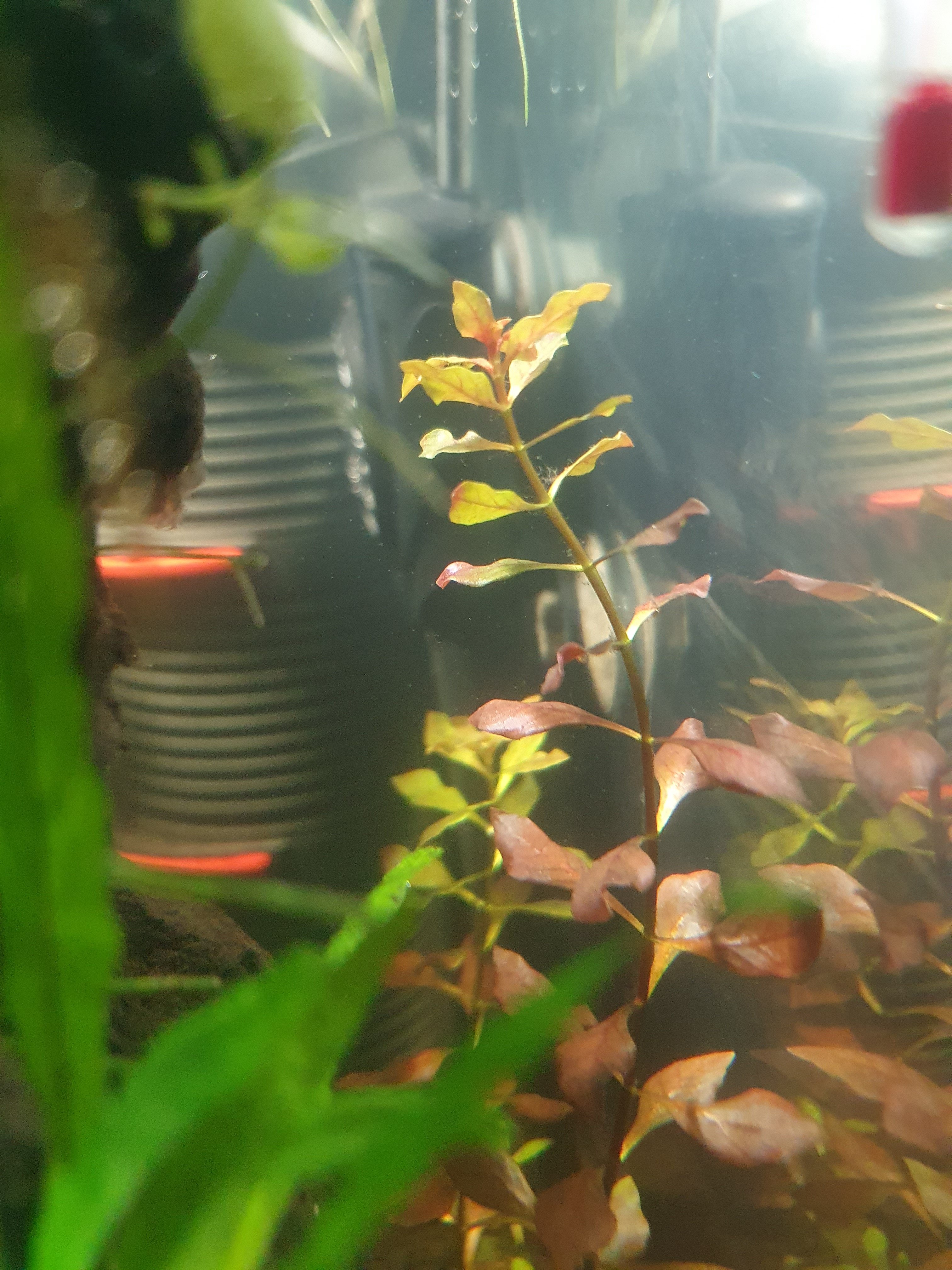 3. Java ferns - I have a lot of young plants growing on the fronds. Those fronds are generally poorer and I have a lot of new fronds growing. Seems a daft question but looking for clarification, I should just cut them off and attach the new plantlets, yes? 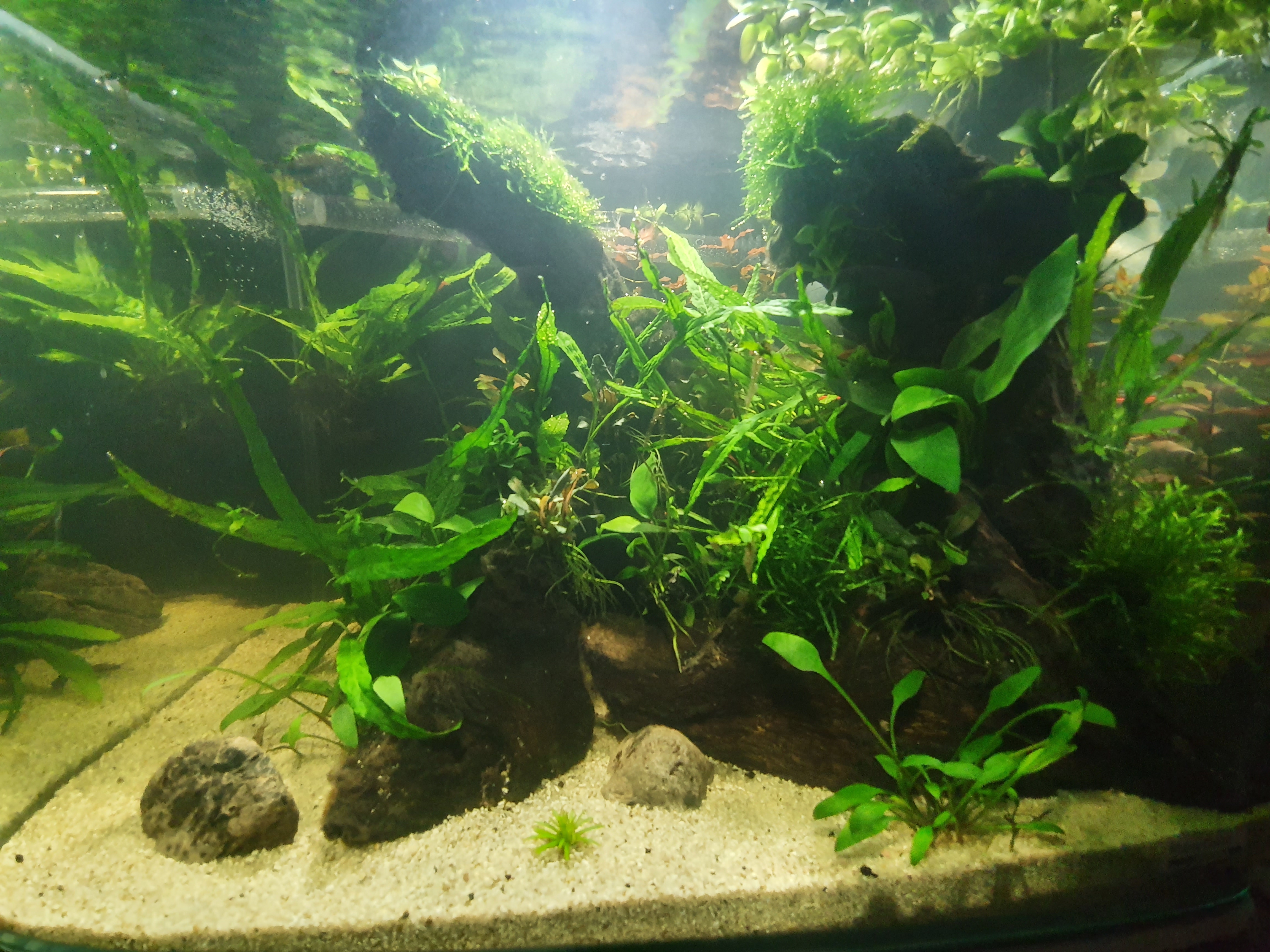 Forgot that I added a few seryui stone to try to harden the water a bit. Not sure if it worked or not and I've stopped testing everything except the tds meter, laziness, tannin stain, fish and plant happiness. Working so far. 👍

Your cory looks great. It's much better to keep a little bit of a belly on them than them not getting enough.

The Ludwigia is transitioning it's growth to your lighting, so will likely lose the red unless it gets more light.

Java ferns produce with little plantlet's on old leaves as a last chance to propagate itself. This is perfectly normal and in nature the old leaves would break down and the new plants to float away somewhere else. In a tank you can remove them and replant the new plants or if you don't mind a slightly tatty looking tank you can just tye the old leaf to a stick or similar.
S

Hi. Your tank is going to look great. I have the same one and its amazing what you can fit in it! Heres my effort. 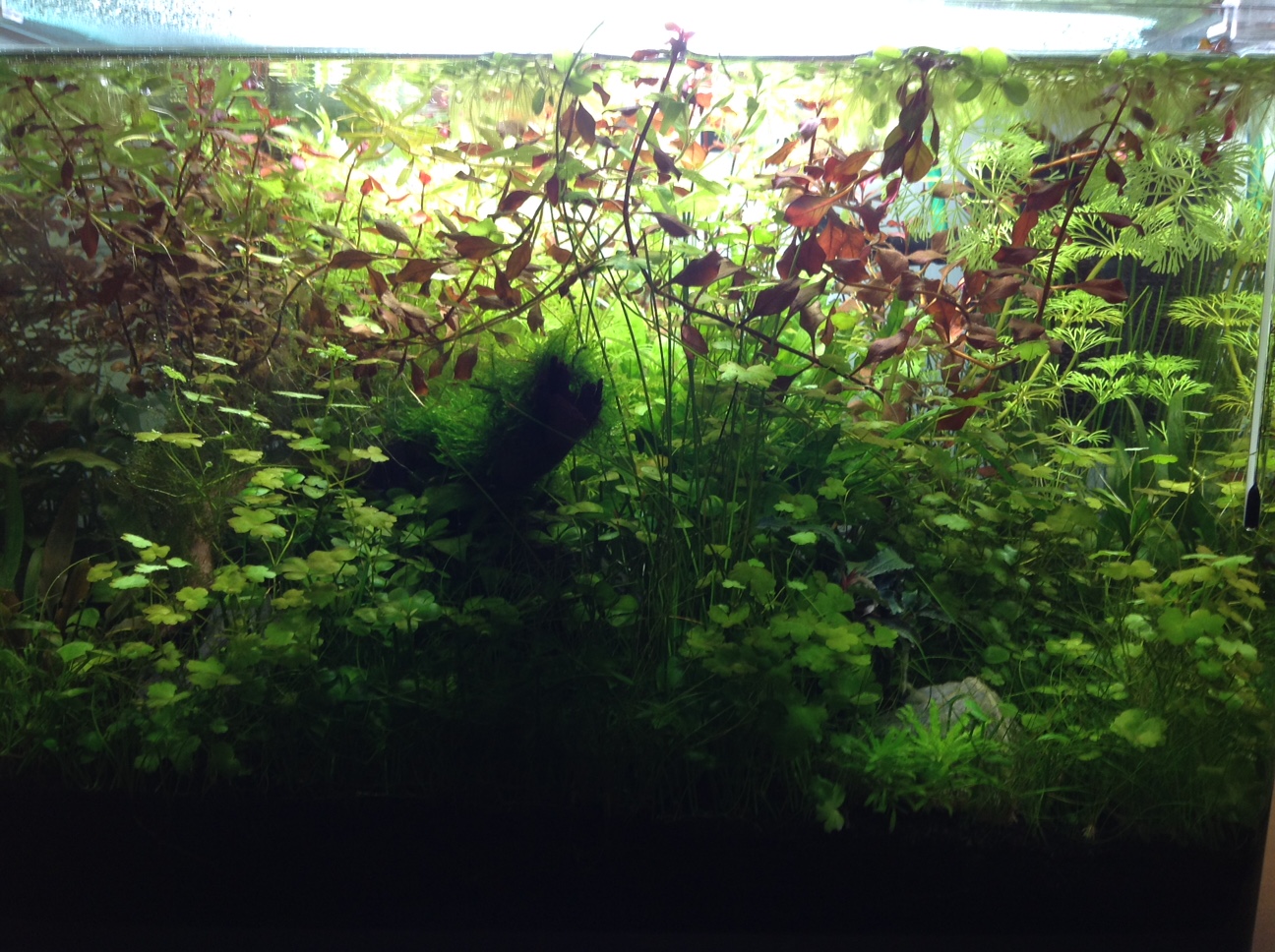 Frogbit roots managed to reach the soil. I keep a lid on this tank due to the cat, so big leaves curl against it. The lid.
😉 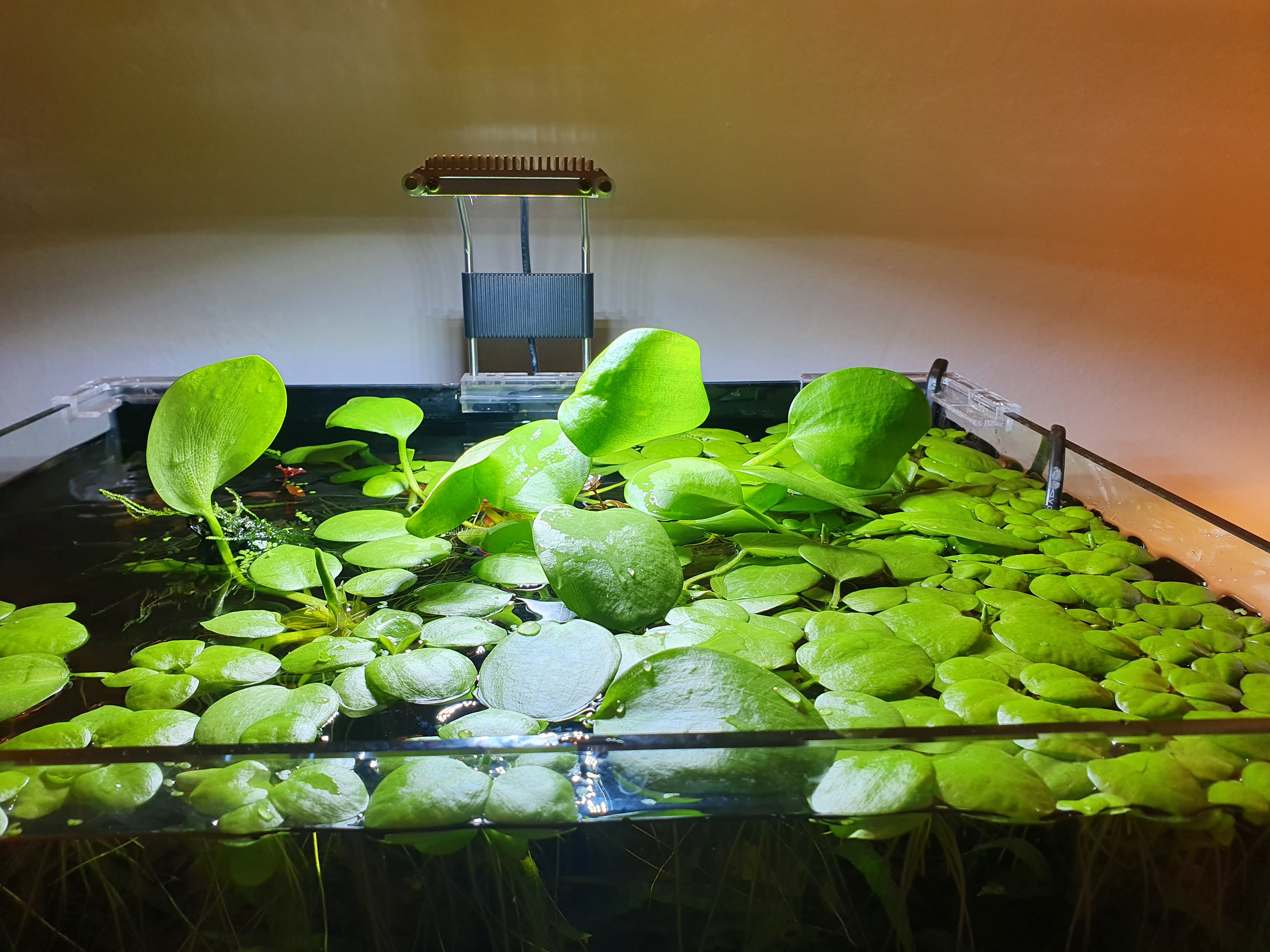 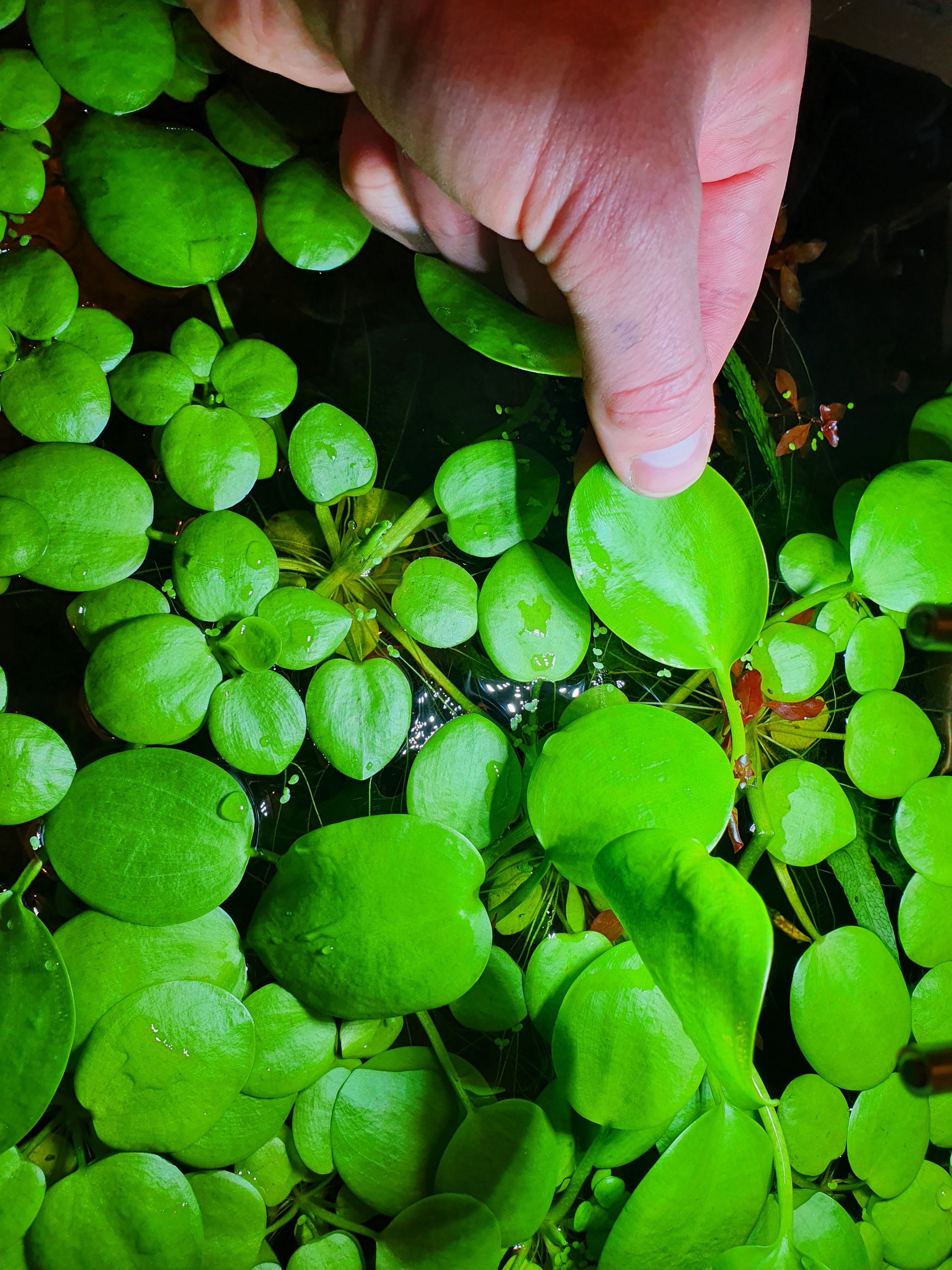 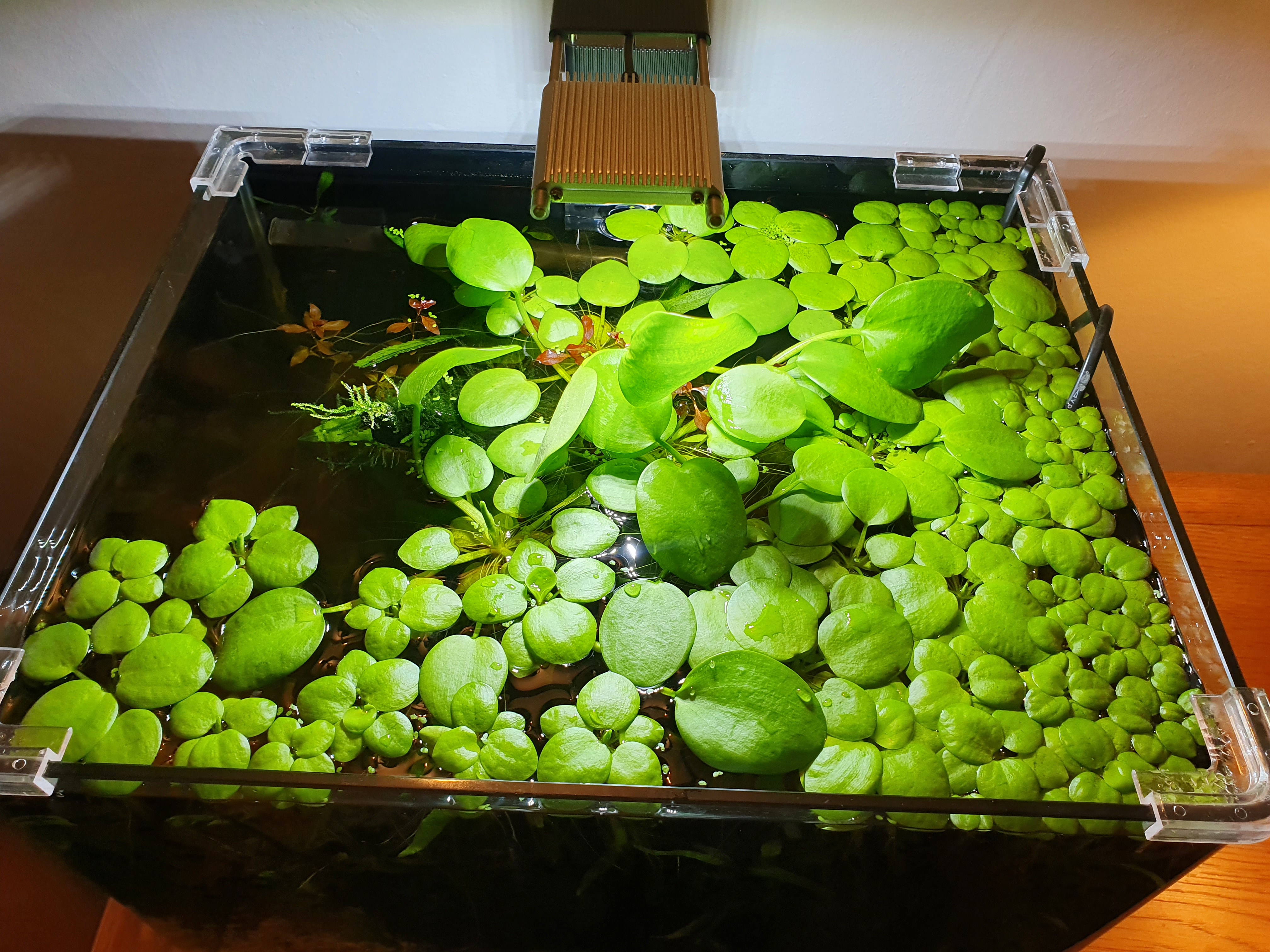 Needed a bit of a trim. 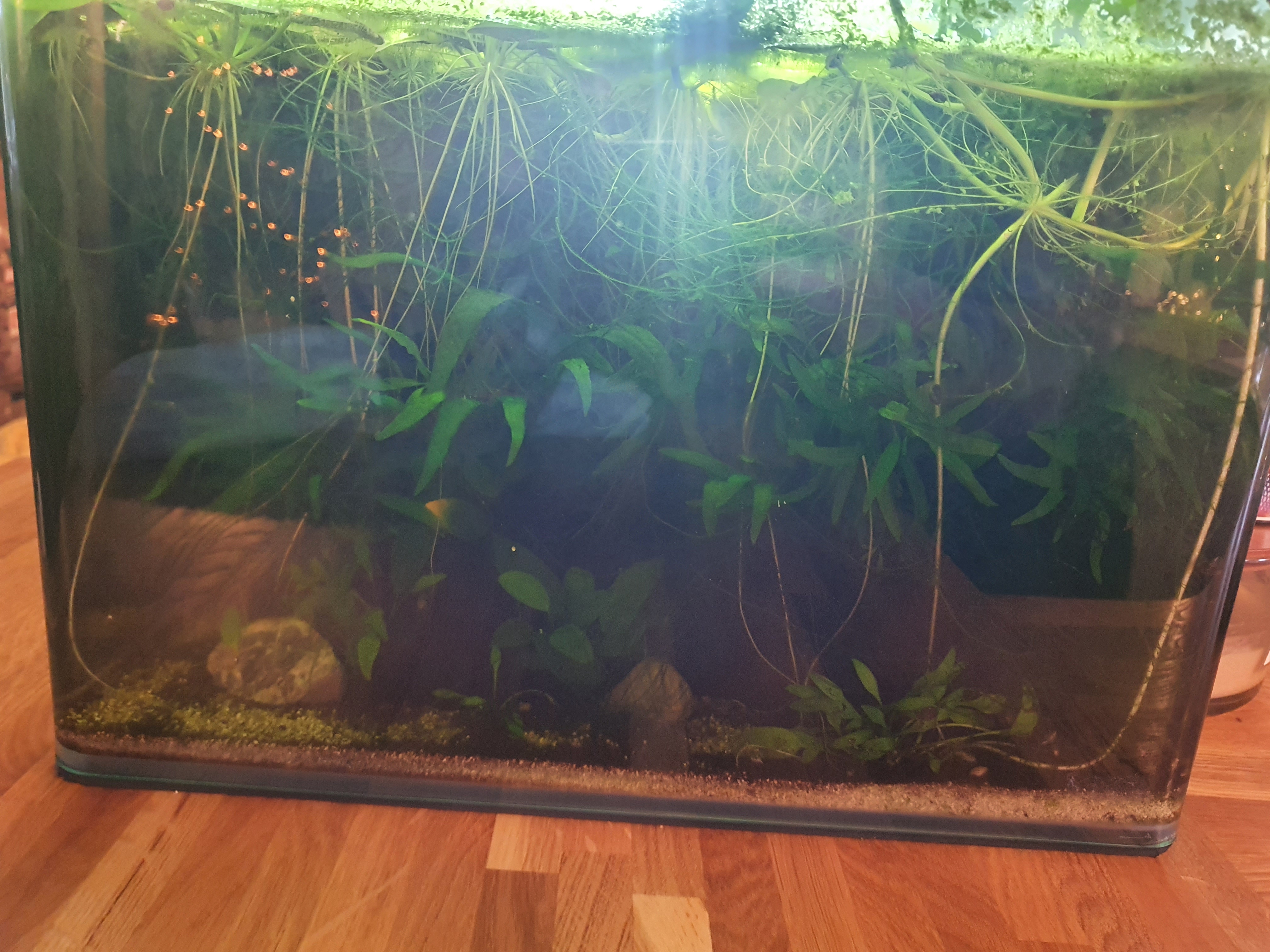 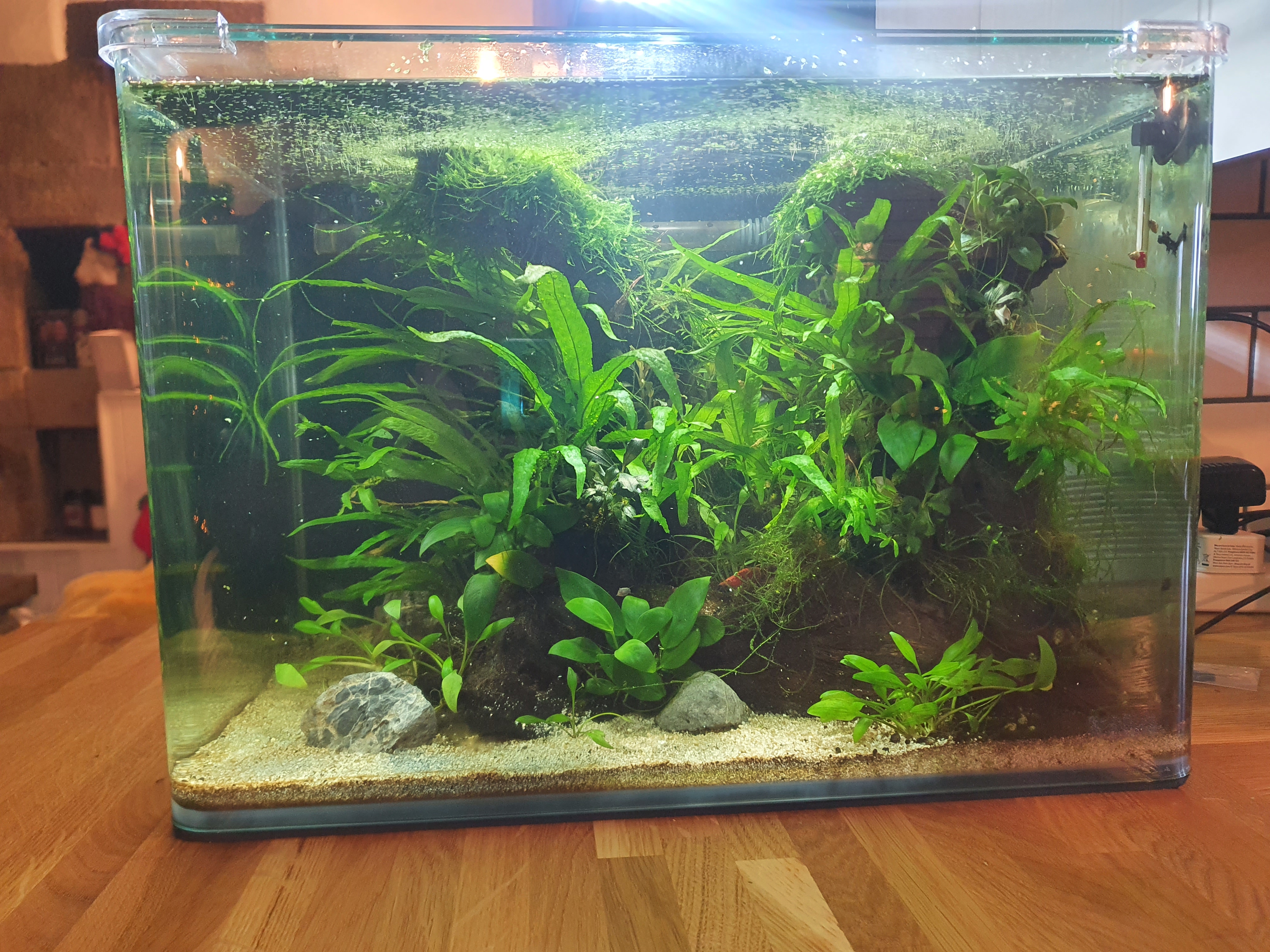