I thought it was time to turn this into a journal, as I keep posting final shots and then slightly changing it

So here we go with the latest changes. Added some Vallisneria nana and Staurogyne from the festival, and some Crypt wendtii (?) from the Rio180 downstairs. The tank is taking a new angle now. Less of a landscape, more of a "what new plants can I grow?"

I've started adding CO2 again now as well as the Excel, and switched to TPN. I did originally switch from ADA to TPN+, and yet again I got algae - I can't seem to work that stuff out! I tried increasing Excel, and also increasing TPN+ at different stages, but still got nasty brown and hair algae in the moss. Now I'm on TPN for trace with ADA Special Lights for the macros just to try it out, Excel daily and blasting CO2 in there as well! All or nothing lol.

So here's the photo, yes the lilys do need a clean! 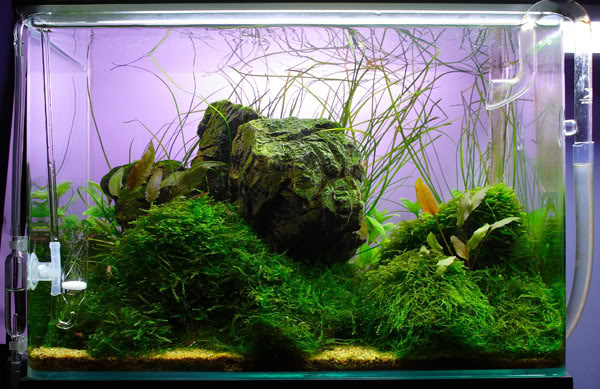 I dunno... It's not really my cup of tea, I preferred it before but it's still nice though.

How long's it been set up?

It's been set up with moss since may, then added Java Fern a few weeks later. Then about a month ago I added different rocks and removed the ferns. New plants went in yesterday morning.

Keep it trimmed low, and don't let it go wild It should turn out pretty neat

^ I was thinking the same thing, I get all excited when I see an unread reply and then just see ''oohh'' lol

Joyous124 has just put the "oohh" in there just to boost his postings and get himself another star (fish??)

I of course, wouldn't do such a thing. Just look at the number of posts I have accredited to my name!!

However, back to the point of the original post: Well done, I've seen better but never acheived better myself so very envious.

Had a little hack at the moss yesterday and exposed a bit more foreground. Not sure if I like it how it is now or not. I'm contemplating hacking a bit more on the left side as well though, up against the glass. Not sure what I could replace it with though :?

I loved the look of the ADA Xingu sand Graeme used in his nano at FoF, so might get some from TGM before long. It just seems to have the ability to create a little bit more detail in a foreground. I would bank it up against the moss, but exposing the Sarawak sand that's there at the moment. 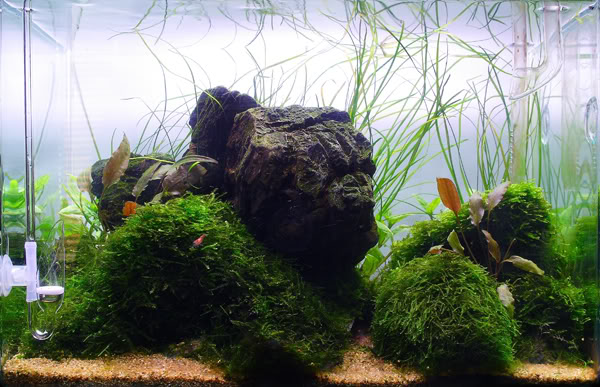 not sure on the crypt addition but the vallis certainley looks good.

how come the moss looks brown or is it just the pics??
Aaron North
My Flickr Account | Equipment needed for setting up an FE | Algae & Nutrients

aaronnorth said:
LD your a mod so remove it if you dont think it is suitable
not sure on the crypt addition but the vallis certainley looks good.
how come the moss looks brown or is it just the pics??
Click to expand...

aaronnorth wrote:LD your a mod so remove it if you dont think it is suitable
not sure on the crypt addition but the vallis certainley looks good.
how come the moss looks brown or is it just the pics??
Click to expand...

It's got brown algae on it Much better than it was, I'm working at it. I might remove the Crypts, see how it goes

Tom
You must log in or register to reply here.