So my old 45P has been a lowtech tank for a couple of years now. Initially I had the idea that I'd try out CRS in it, but it more or less ended up as temporary housing for fish and a dumping ground for plants. No wonder then it ended up looking like this: 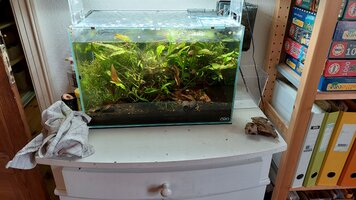 At this point the tank held my titteyas, kuhliis and a few galaxies. Also legions of shrimp and malay snails. The barbs eradicated all the Hyalella though. Also a lot of plants, mostly in a not very pristine condition. Actually, most were compost ready...

So, empty tank, move fishies to the permanent temporary tank, save the few plants worth saving, and start from scratch. Some hardscape iterations later I ended up with something like this: 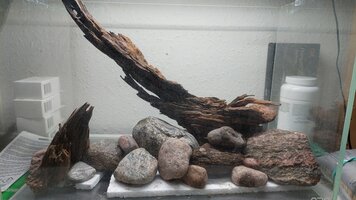 Yeah, sorry about all the extra crap around the tank, it's very much a wip. Details in hardscape subject to change, also need more pebbles

So I obviously need to secure that huge piece of DW, tried with cigarette filters and superglue, big mess. Apparently had not read the manual on that, only thing not getting glued was the stuff I needed to glue. I still have a large rock glued to my left hand, a real nuisance when playing piano...

Giving hot glue a try at the moment, if it turns out good I can get a dry start going, planning quite a bit of moss on the DW here.
Cheers Thomas
Carpet Deathmatch
Aquascaper 600
Red & Green (discontinued)

Fiske said:
So I obviously need to secure that huge piece of DW, tried with cigarette filters and superglue, big mess. Apparently had not read the manual on that, only thing not getting glued was the stuff I needed to glue. I still have a large rock glued to my left hand, a real nuisance when playing piano...
Click to expand...

I think we've probably <"all been there">, minus the piano playing.

Yeah cigarette and superglue method has been hit and miss for me too. I like epoxy putty and zip ties better myself. Belt n braces. Silicone sealant I also find to work better for larger wood because it can flex a little.
Don’t believe the hype.

I bought superglue with a brush included, that made life a bit easier for me, but still ended up getting glue everywhere I prefer zipties and wire/yarn whenever possible.

I'm probably going to screw the large wood to a piece of acrylic though. The whole glue business was to much for my patience 😂
Hope I can get on to the moss dry start thing soon, it has been way too long...
Cheers Thomas
Carpet Deathmatch
Aquascaper 600
Red & Green (discontinued)

Amazing how simple some stuff can be, if you approach it the right way.
Got some acrylic, six holes and 3 plastic ties later I can start building up the hardscape. Took all of 15 minutes...
So I'll get the rocks and wood sorted over the next week, just need to get through 3 nightshifts.
Plan is to run a dry start with mosses:
Christmas moss, Vesicularia cf dubyana
Vesicularia cf montagnei 'Krabi'
Plagiomnium cf affine

How did you get on with the dry start?
Don’t believe the hype.

LOL dry start is going awesome; tank is still as dry as in that second picture up thread 😅

Kind of stalled a bit, somehow I wasn't too keen on the hardscape. I'll get around to it soon-ish but will have to get a new light first, ye olde Amano light is losing the plot.
I sort of have this and 2 other tank rescapes that's been on hold for several months, mostly been working and keeping the AS600 and shellie tank out of trouble.
Speaking of, I really need to update...
Cheers Thomas
Carpet Deathmatch
Aquascaper 600
Red & Green (discontinued)
You must log in or register to reply here.