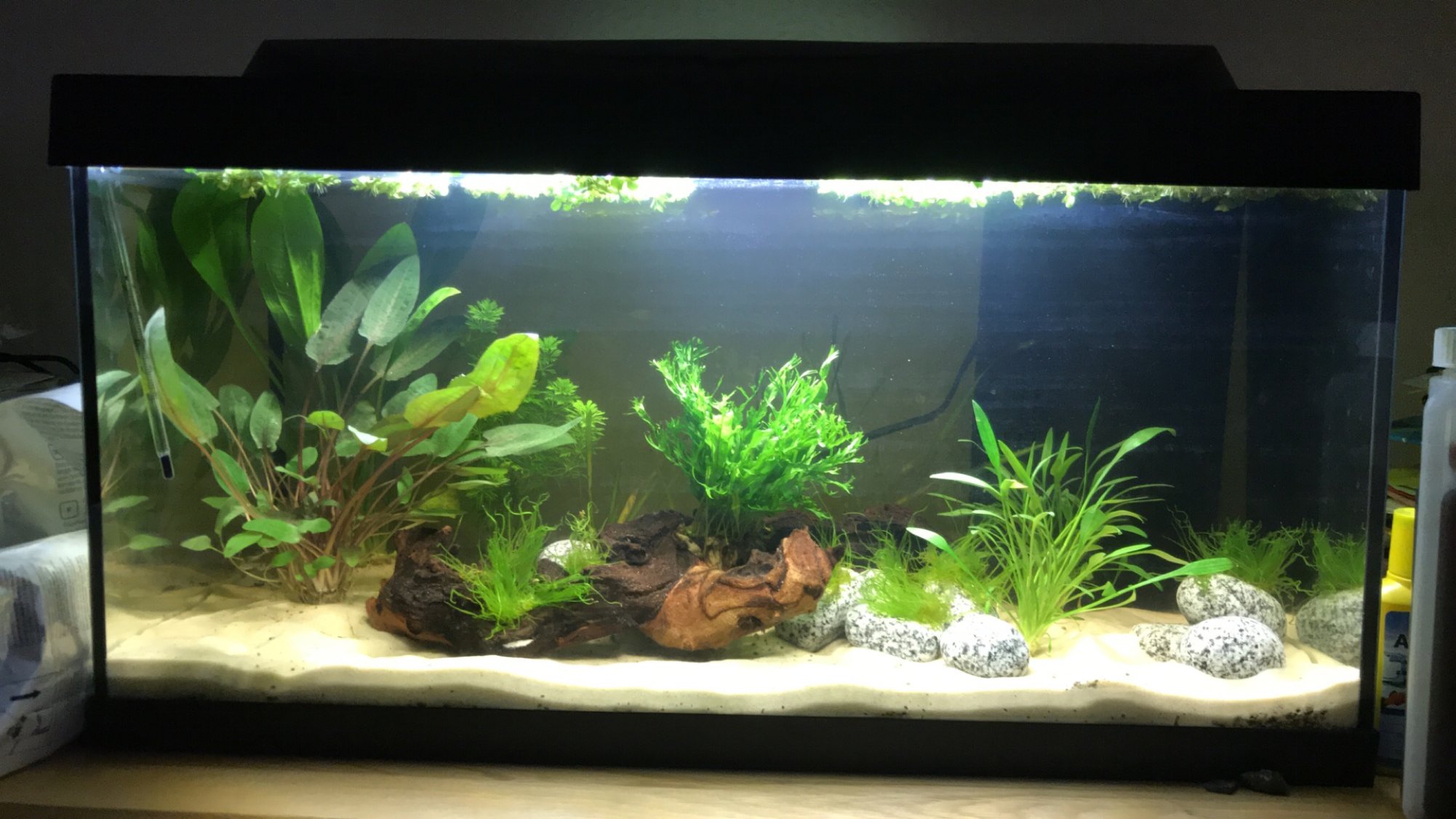 Tanks still cycling so just looking at some potential stocking ideas for my 54 litre.

1 x betta splendens
8 x neon tetras (but I’m really put off them as they seem to get a lot of illness)
6x Cory cats.

If you have any better suggestions feel free to let me know!

A pic of the tank attached as well, if it’s helpful.

Do you mean all together or just one of the above?
Instagram = ka_aquascaper

Kalum said:
Do you mean all together or just one of the above?
Click to expand...

Together.. is it it over stocked? I have googled a lot of stocking ideas and have seen this group be suggest a lot.. and a lot of experienced fish owners discussing over stocking in planted tanks in this day and age with current filtration and water changing regime. But obviously appreciate a smaller bioload will be better to prevent and sudden ammonia spikes in a matured tank.

small tanks are best kept to species only tank (such as a betta, scarlet badis, etc...)
Instagram = ka_aquascaper

I think that is a roma 600 if I am correct, I had one, I also had neon tetra's and a betta in it and I agree with Kalum, I saw very little schooling behaviour from the neon's and they just sort of plodded about.

Having a betta really limits future options too, most shrimp are a no go (Yes this made me sad when I found this out at the time haha)
Last edited: 29 Aug 2019

So any other suggestions?
R

you could try harlequin rasboras, they are more of a shoaling fish than a schooling fish.

A possible alternative to a betta is a pair of pearl gourami, very good community fish and tend to stay around the top level of the tank much like a betta.

richard brown said:
I think that is a roma 600 if I am correct, I had one, I also had neon tetra's and a betta in it and I agree with Kalum, I saw very little schooling behaviour from the neon's and they just sort of plodded about.

Having a betta really limits future options too, most shrimp are a no go (Yes this made me sad when I found this out at the time haha)
Click to expand...


Are Bettas really that bad in a community? I have seen so many people keep them with other fish no problem?
R

It really varies from fish to fish with Betta's, some are great community fish, some just want space and to be left alone, mine was fine with the neons though, just the neons never really displayed schooling behaviour because of the low numbers.

A few things to think about...
Your tank is not the largest and would look better with smaller fishes / this will give them a better habitat.
Match your fish to your water parameters
Honey or sparkling gourami may be more appropriate than pearl gourami given tank size.
Consider the layers in the tank, whilst you currently have a fish for the bottom, middle and top, don't loose this through your stocking revisions.
What about quality cleaning crew - otocinclus, snails, shrimp

You're right about Neons, a lot of those available are in very poor condition, and prone to health problems. Green Neons are usually better, and also a bit smaller in maximum size, but otherwise quite similar, so I would consider those as a good alternative.

Cory’s can be entertaining, you’ve a sand substrate after all. If it’s soft sand bury a pellet and watch them hunt it out. Watch them go up and down the glass after lights out. They even keep an eye on the TV after lights out from experience if your tank is in your living space. Can be long lived though if conditions are right, make sure you like them, a rewarding species if conditions are to their liking.

You can always add some shrimp and nerite snails alongside without any problems too to add to the drama. 54l isn’t much though so make it count, don’t fall into the trap of going for multiple species of fish in a small aquarium. It seldom reveals the best behaviour of any species.

Maybe you already know this but if it is Cory’s you go for make multiple trips before buying and keep an eye out for fungal growths.
One Zero Three
Dutch Donut
Something... Something... Shallow Tank
New Decade, New Decadence...
Taking a sump. Back in five minutes...
New Year, New Scape...
A

Harlequin rasboras display quite interesting (sophisticated) behaviours in larger groups (8 is a minimum but 20-30 is much more interesting) but again unless the swimming room is sufficient, only limited behaviours will be displayed

In a smaller tank, choose fish that you like as individuals- color/displaying (individual) behaviour
eg, Black phantoms are lovely engaging fish even when kept in small tanks in small numbers (I’d keep 7 as a minimum, 3-4 males, 3-4 females) as the males will frequently show off for the girls, mock battle the boys ...

Behaviour Test your Betta, if he goes absolutely mad for a mirror or pen, tankmates may take some trial and error (& might end in none suited to your tank set up and your Betta), a less active Betta is usually more accepting of tankmates (but then you need to take care that he isn’t bullied)
Of course all of this is much easier with multiple tanks - at the least, keep a suitable container at hand for your Betta ... if he seems much happier during his container interludes, that’s an answer

Most Bettas and Corydoras seem happy enough together (for a smaller tank, choose smaller Cory species)

Very small fish such as lampeyes and clown killi’s can easily become tasty Betta treats, so watch for declining numbers
Ember tetras with their deeper body are less likely snacks

Some excellent advice. I've found that Black Phantom's appreciate some cover from floating plants, mine definitely showed better colouration when their tank was quite shaded, though not ideal for plant growth... Embers on the other hand are more forgiving, and you could stretch to double figures.
You must log in or register to reply here.
Similar threads