The tank is not here yet so you'll have to be patient (like me!). However I thought I would add a few details as I miss adding to a blog.

First of a little background for those that don't know. Up until a few weeks ago I was running 6 tanks plus a bowl. Here is the blog - http://forum.practicalfishkeeping.co.uk/showthread.php?t=89433 I decided (for a number of reasons) to reduce these to 1. (Well 2 but the other will house Fire-Bellied toads).

My plan for the tank (inspired by Tom's Bucket O'Mud and Alastair's Chocolate Puddle) was to go for some emmersed growth in the form of some popular house plants and a blackwater style bio-tope for the fish. The tank will house my Ember Tertras, Chilli Rasbora and hopefully my male Betta. My eventual plan for this tank will be to house a few female Betta Splendens - hence my title.

First task was to decide on the tank. My initial choices were an ADA 60P or TMC Signature as I wanted a decent brace-less tank. The TMC would not fit in the space I had so that left the ADA. At £150 per tank I was not sure I could justify the expense for a 2ft tank. In the end I ordered two tanks from ND Aquatics for almost half the price of the ADA. They are the same spec as the ADA - 60 x 30 x 36cm - but with 10mm glass. The front panel will Opti-White whilst the rest will be standard glass. These are being delivered on the 24th June.

Whilst I have been waiting for the tanks to arrive I have sold most of my other tanks and have been getting the bits together for the new tank. The bits I have so far are:

Lighting - 2 TMC Aquabar 500's with dimmers. It was really important for me to have control of the light intensity as this was lacking with most of my previous tanks. They will be mounted with TMC Tank Rim Mounting Brackets. My only concern will be whether the emmersed plants get enough light. Time will tell. I can always tweak it. 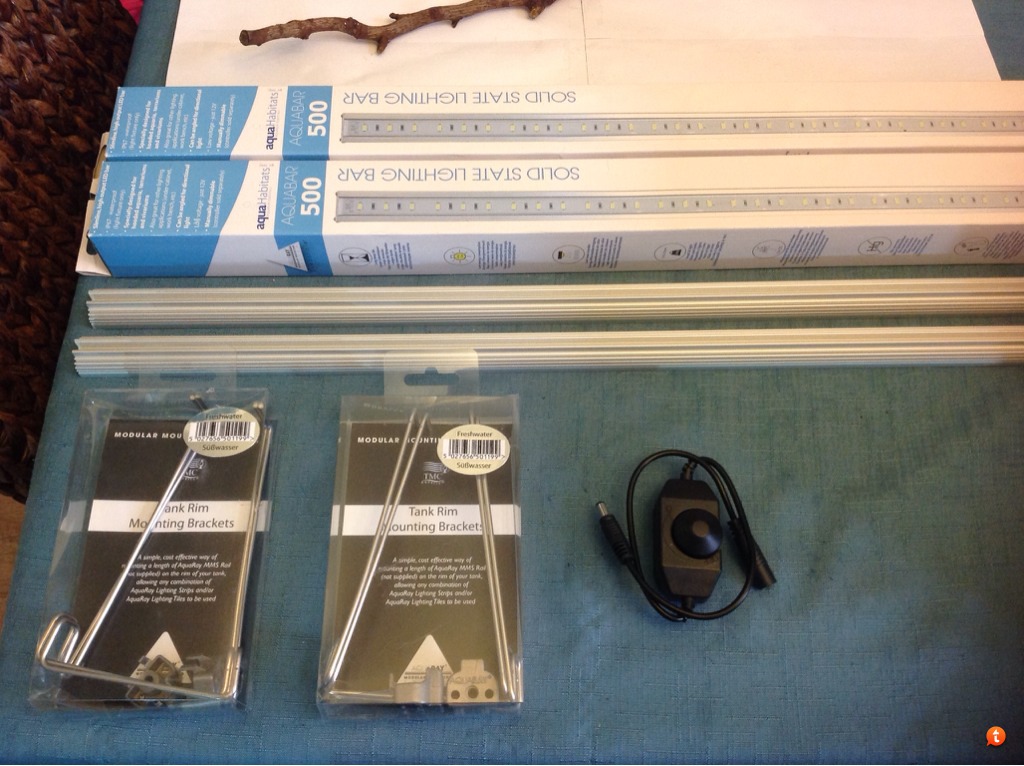 House plants being used are Peace Lilly, Ficus, Maidenhair Fern and Calathea. Looking at them I am not sure whether they might take up too much space. I am considering just going with a row of Peace Lillie's. I think I will give these a go and see how I get on. 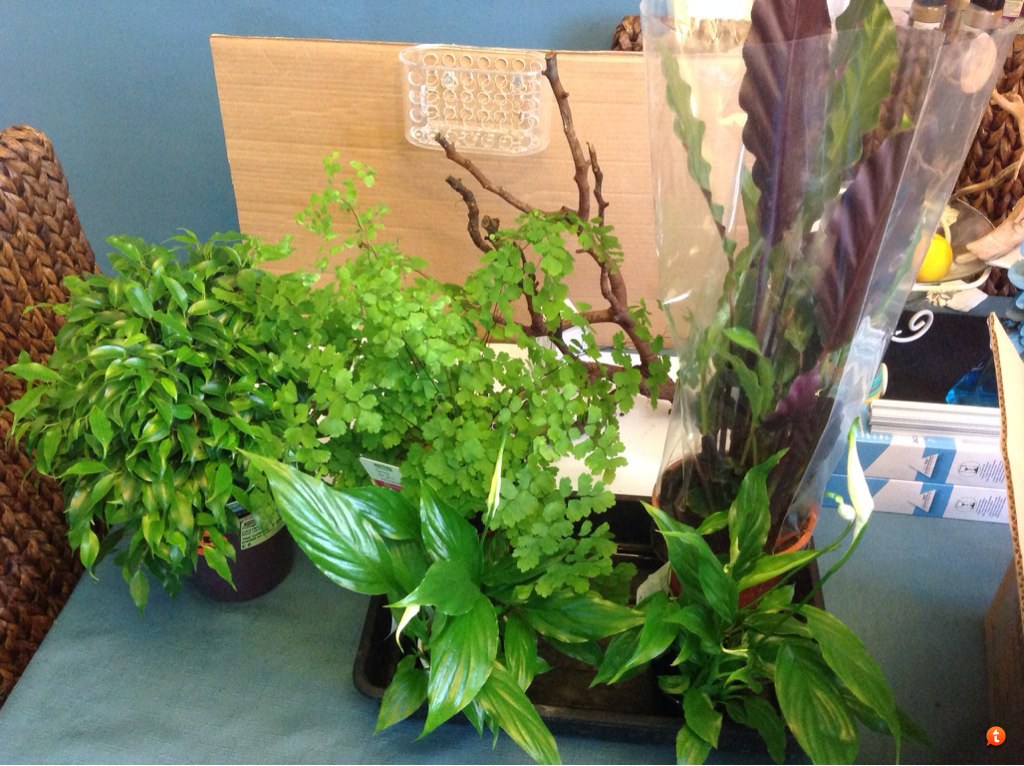 Hardscape will be a couple of my salvaged pear branches but I may replace these with manzanita later on. I am planning to go with a soil substrate capped with either sand or cat litter. I am not sure which at this stage. Plants will be various Anubias and Java Ferns. The surface will be covered with floating plants. The emmersed plants will be attached to the back wall using 'bathroom organisers'. They will contain clay balls capped with soil and sand. 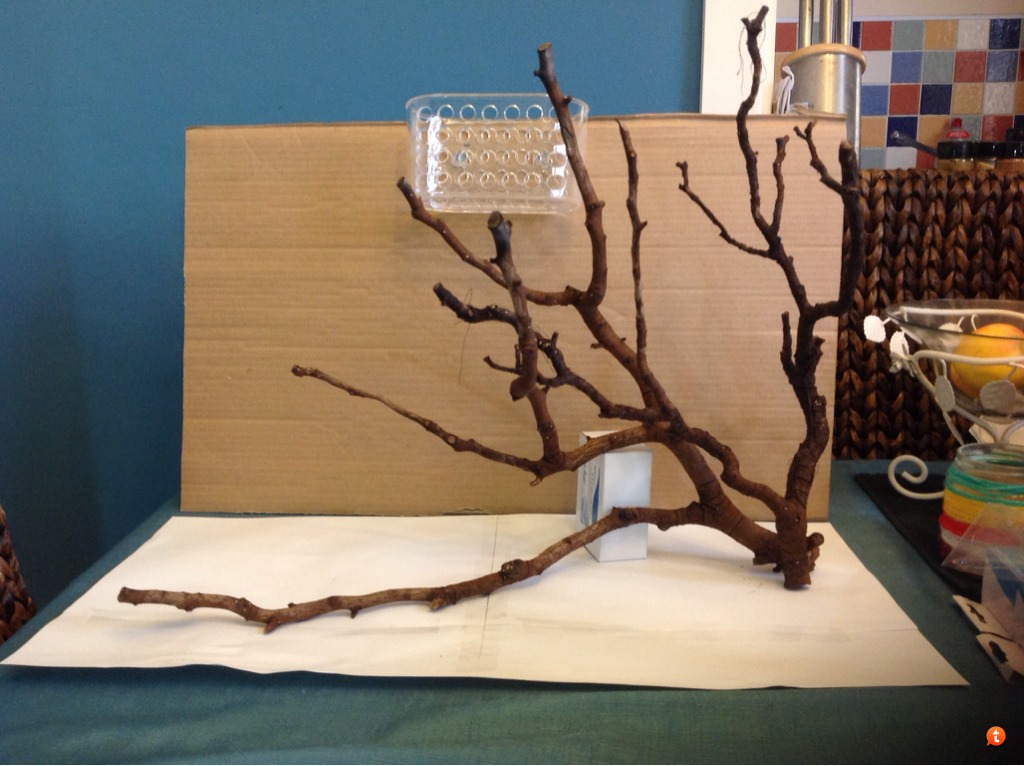 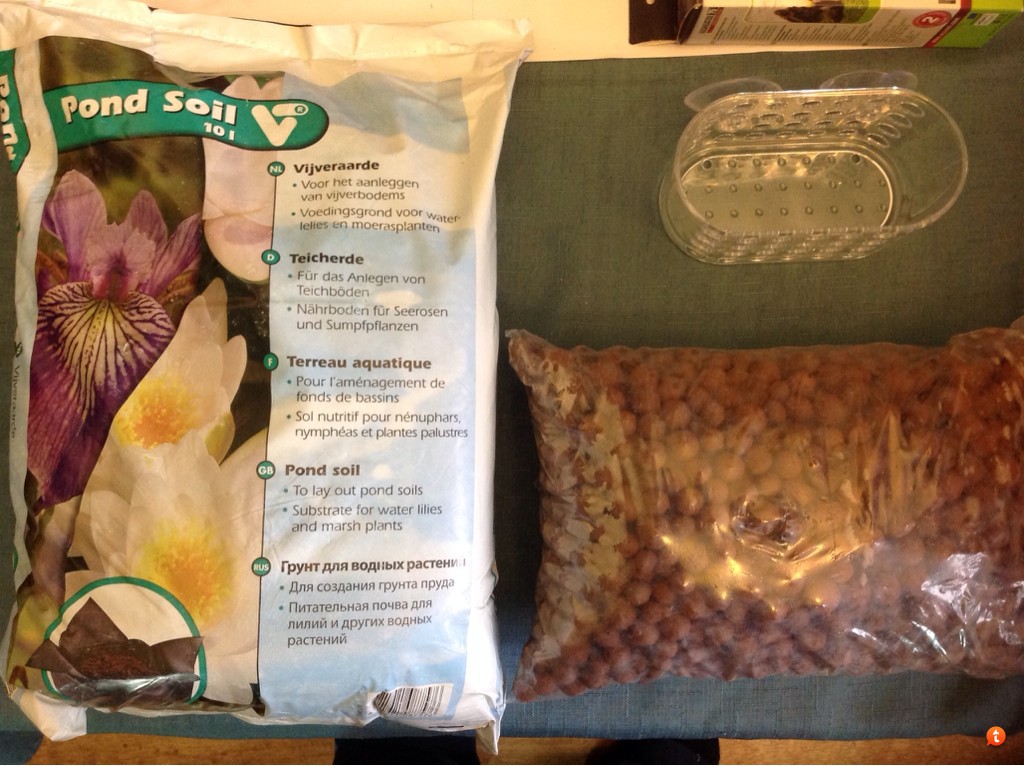 Filtration will be via one of my current Fluval Nanos and I have bought a 75w Aquael heater which looks quite discreet for a heater. 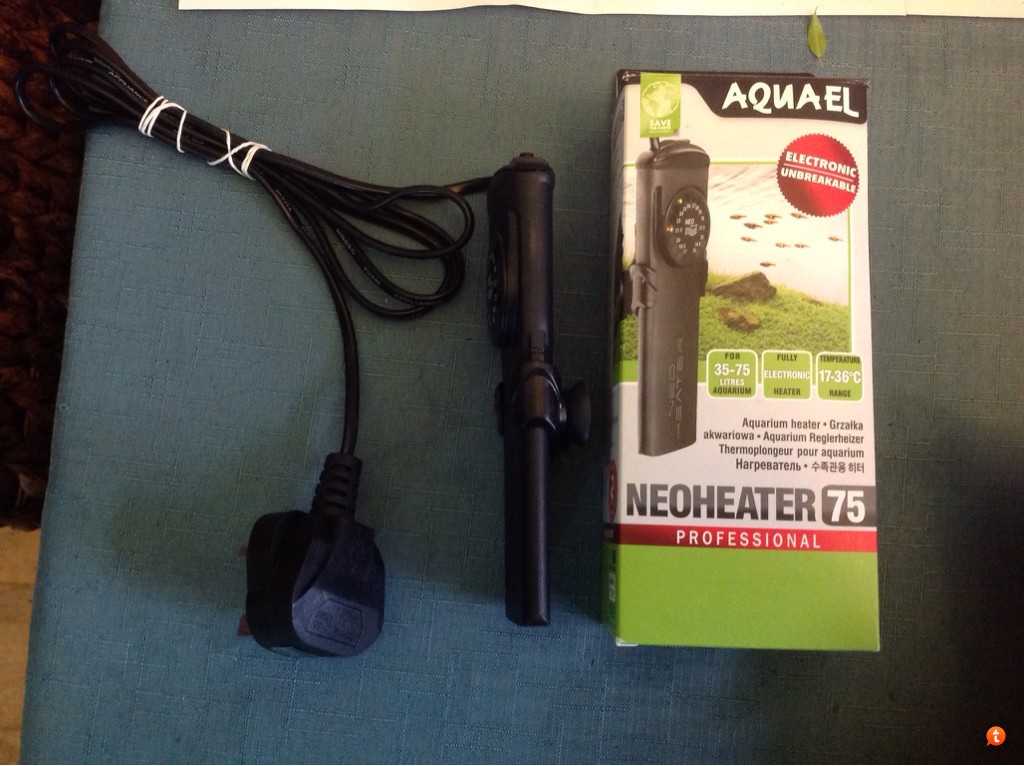 I am planning on going with 100% re-mineralised RO using this formula - http://www.theplantedtank.co.uk/RO.htm. This will give me a gH of 5 and a kH of 1 although I am going to increase this to two. I did consider a pre-mixed formula like TMC Re-min but I think this will be far more cost effective. The chemicals and scales cost about £20 and should last over 2 years. 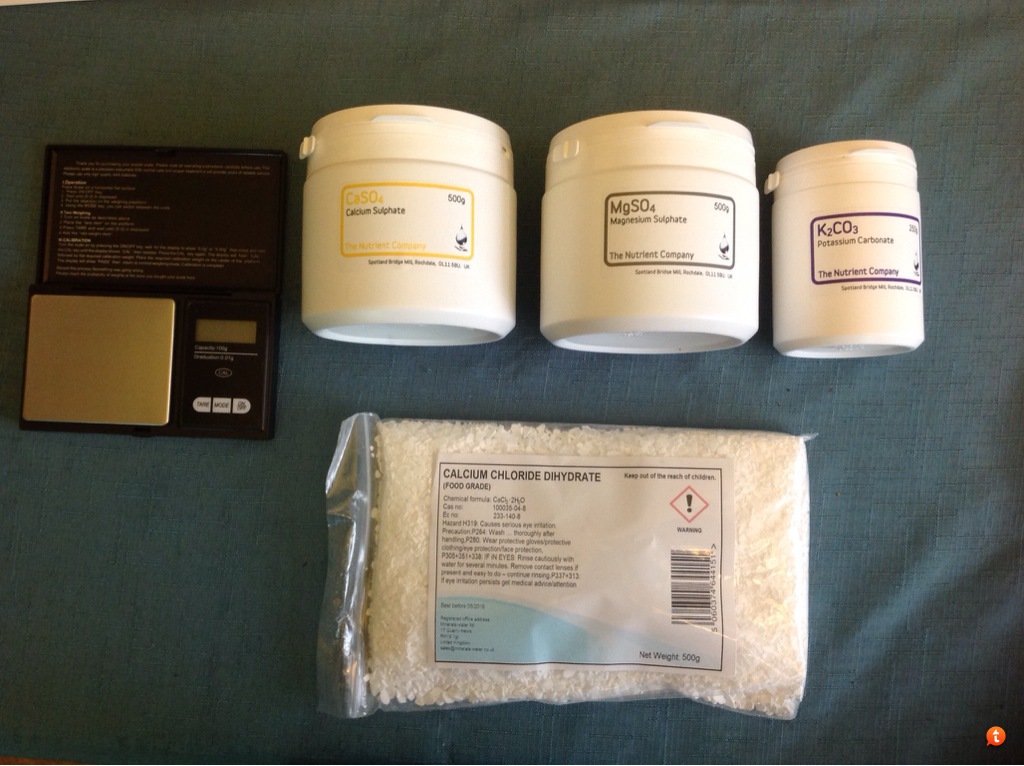 Current plan is to keep the tank open topped but I have had some covers fabricated from polycarbonate just in case.

looks good andy will be watching this one
Thanks Dean

Thanks. I hope so. For once I actually have a pretty good idea how this will look.

Edvet said:
Just me being me, why not something like Beta imbellis or so
Click to expand...

I am always open to suggestions.

I will bear that suggestion in mind. At present I have the fish already.
Current tanks coming soon...
CLOSED: My 'Splendid' Tank - Epiphyte Tree - Crystal Red Shrimp - My Low Tech Scapers Tanks

Sounds like it's going to be a Splendid tank Andy Looking forward to it.
https://www.ukaps.org/forum/threads/round-indoor-pond-project-queries.42857/page-24#post-554724

I fear you are right about the terestrisls... I have about that many plants in my 3 foot vivarium type thingymebob and they take up the whole thing. A bunch of Spathiphyllum and maybe mix some of the adiantum sp. In and it will look great

Thanks for the positive comments all!


Potted up the Peace Lillie's today. I am pretty sure I am just going to use these for now as I think the other plants will just be too big.

I gave it a go using the clay balls topped with cat litter and then sand and to be honest what I expected to happen happened. As soon as they were submerged the sand fell between the balls. Instead I used the clay balls and topped with small stones. These are now sat in a bowl of water (with ferts) in the hope they get acclimatised sooner.

I have also bought some 'Redbush' tea bags after reading about someone on PFK using these for tannins and providing similar health benefits as Catappa leaves.

A couple of shots showing the first attempt and final attempt. 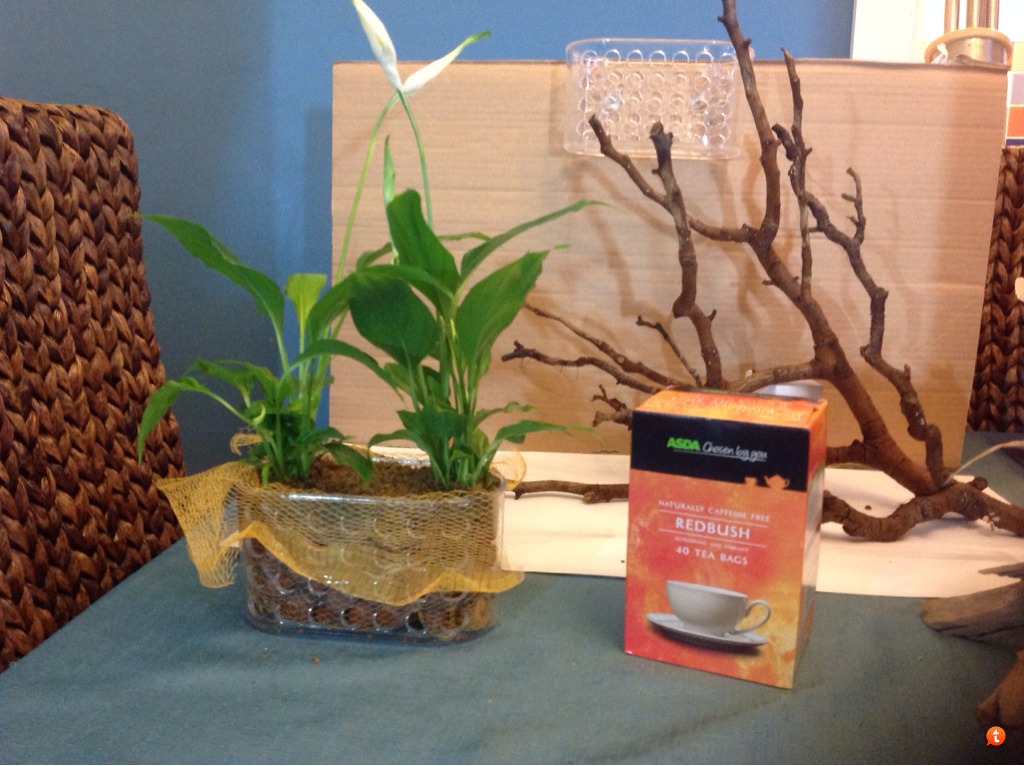 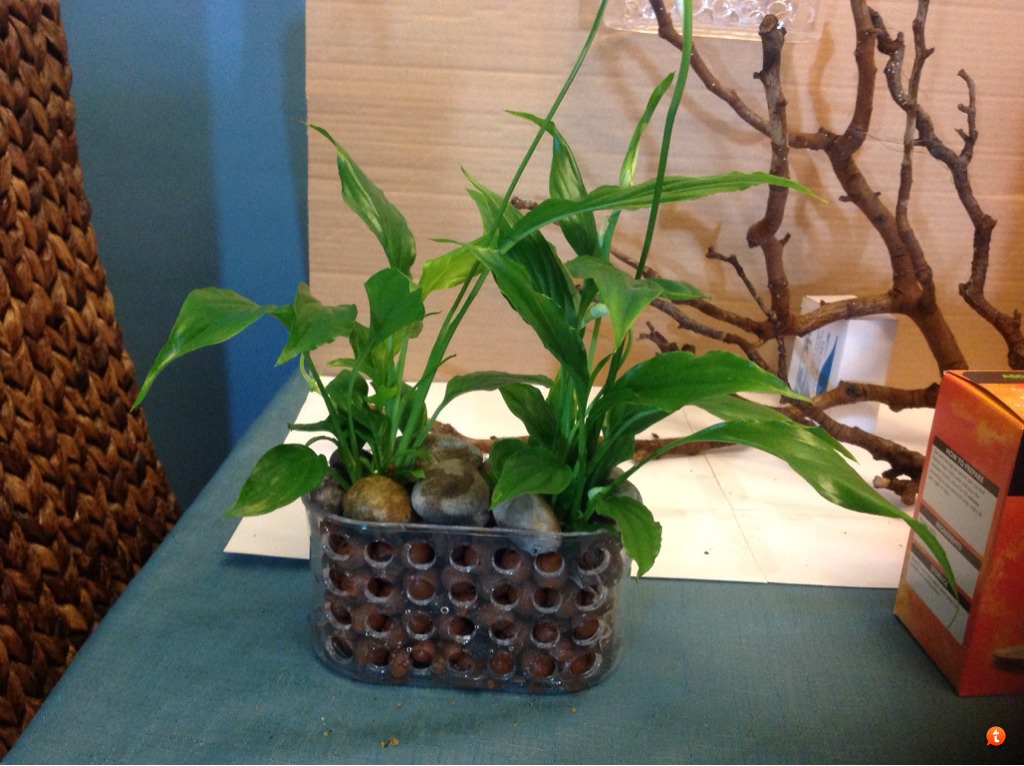 The piece lilies will grow massive Andy. Just give them time
Here is mine after about a year or so: 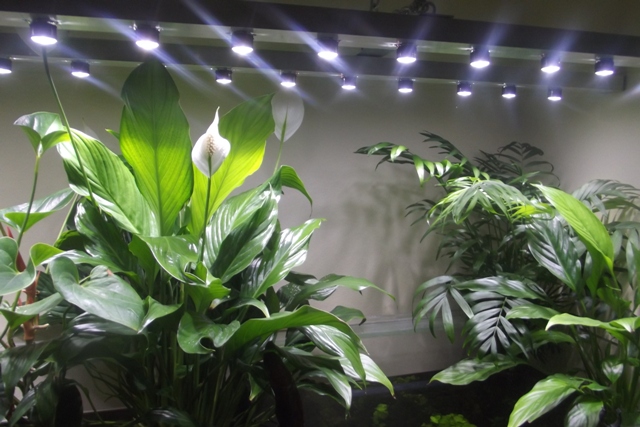 The hydroton balls will get saturated eventually and won't pop out of the planter plus the roots of the lily will grow big and even grow out of the planter and hold the balls with their roots too.
With my emersed plants now grown too much and severely shadowing the submerged plants I've decided to install another light straight over the tank at lower level as otherwise I just can't keep both emersed and submerged plants because the suspended light isn't enough any longer.
I already removed a calathea plant as I ran out of room really on a 5f tank with just 5 planters so if you are keeping them long term, they will grow big.
https://www.ukaps.org/forum/threads/round-indoor-pond-project-queries.42857/page-24#post-554724

I know they can get massive to but I can always trim them or replace them when they are too big.

Nice shot by the way. Do you have a full tank shot? (I suspect you have a journal that I should check out really! )

My other concern is with lighting. It kind of dawned on me after I bought it that the aquabars and tank rim mounting brackets might not get the light into the plants. I might see if I can angle one if needed.

I am not concerned with the plants shadowing the tank as I can move the aquabars and will mainly be using Anubias and Java Fern anyway.
Current tanks coming soon...
CLOSED: My 'Splendid' Tank - Epiphyte Tree - Crystal Red Shrimp - My Low Tech Scapers Tanks

Anubias and Java fern won't mind at all I guess.
The journal is in my signature below under the name "Disaster" but it had quite a few setbacks along its life like lants melting, then recovering, then tank leaking, then all lights busting, etc. but there are some pictures there, nothing special though.
https://www.ukaps.org/forum/threads/round-indoor-pond-project-queries.42857/page-24#post-554724

Thanks, I'll check it out.

(I use Tapatalk so don't see people signatures - just in case you thought I was a bit mental for not seeing it)
Current tanks coming soon...
CLOSED: My 'Splendid' Tank - Epiphyte Tree - Crystal Red Shrimp - My Low Tech Scapers Tanks

This redbush thing has got me very interested. Do you have a link to the pfk post?

Probably not if your on tappatalk

http://www.undergroundhealth.com/10-amazing-health-benefits-of-rooibos-tea/
Think I will ditch the Earl Grey! Interesting about adding a 'brew' to an aquarium too.

aliclarke86 said:
This redbush thing has got me very interested. Do you have a link to the pfk post?

Probably not if your on tappatalk

Sent from my GT-I9505 using Tapatalk
Click to expand...

I can do links

Subscribed, out of curiosity where did you get the bath organisers from and do you think the suckers will take the weight?
Possibly use wire to hang off the side maybe?
"Man sacrifices his health in order to make money.Then he sacrifices money to recuperate his health,And then he is so anxious about the future that he does not enjoy the present;the result being that he does not live in the present or the future; he lives as if he is never going to die,and then dies having never really lived"

AverageWhiteBloke said:
Subscribed, out of curiosity where did you get the bath organisers from and do you think the suckers will take the weight?
Possibly use wire to hang off the side maybe?
Click to expand...

The suckers seem strong but I know they lose strength over time so I will be using wire as a back up too.
Current tanks coming soon...
CLOSED: My 'Splendid' Tank - Epiphyte Tree - Crystal Red Shrimp - My Low Tech Scapers Tanks

My tanks turned up today and blimey they are heavy! I am very happy with them.

However I was not happy with this - 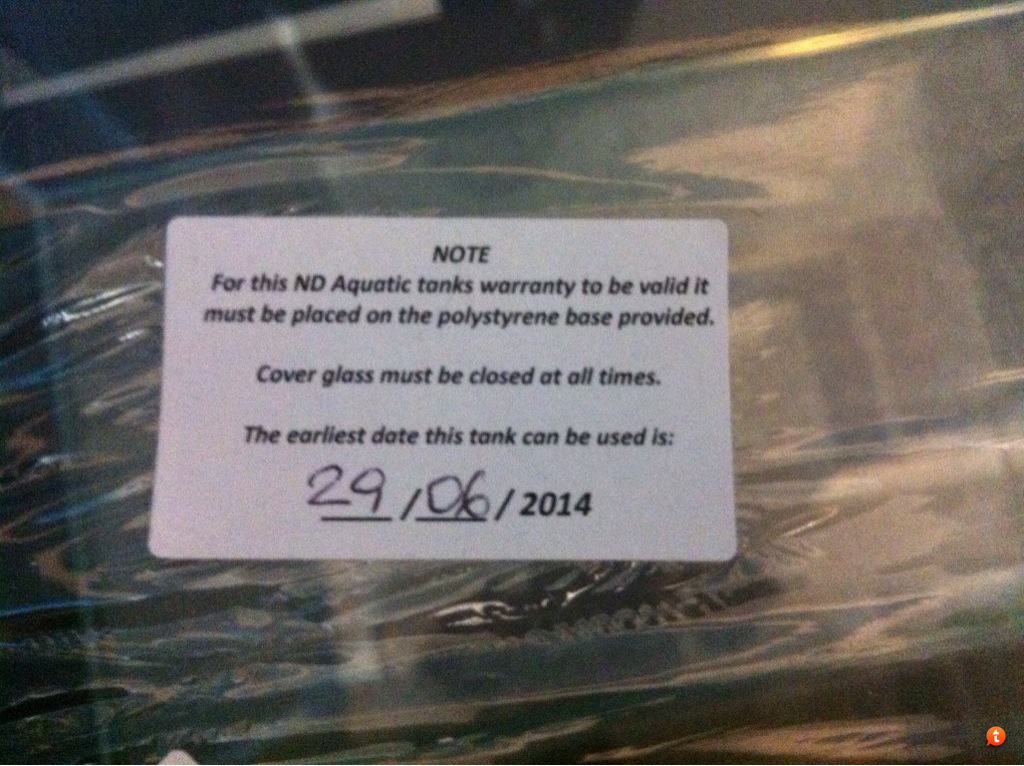 - especially as my other tanks have been drained and cleaned and my fish are in buckets! I called ND Aquatics and the very friendly lady who answers went and spoke to the tank builder who advised they will be okay to use on Friday. They look fine to me but I don't wanna risk it so I did not need to take a day off today. Oh well, at least they are here.

Another negative is that I had planned to use the lights from my Ebi's to light the toad tank. However I had not checked on the size of glass they would accommodate and 10mm is too wide. D'oh! The positive is that one TMC Aquabar will be plenty for each tank so lights are sorted.

Therefore today has not been too productive. But here are a couple of shots to give you an idea: 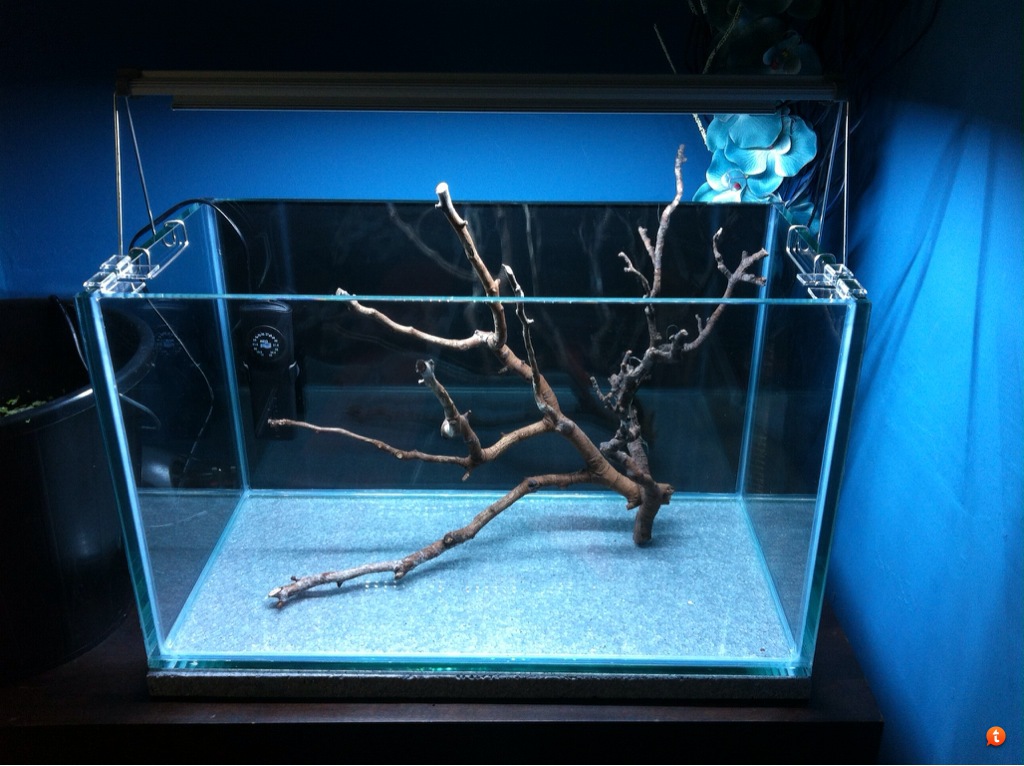 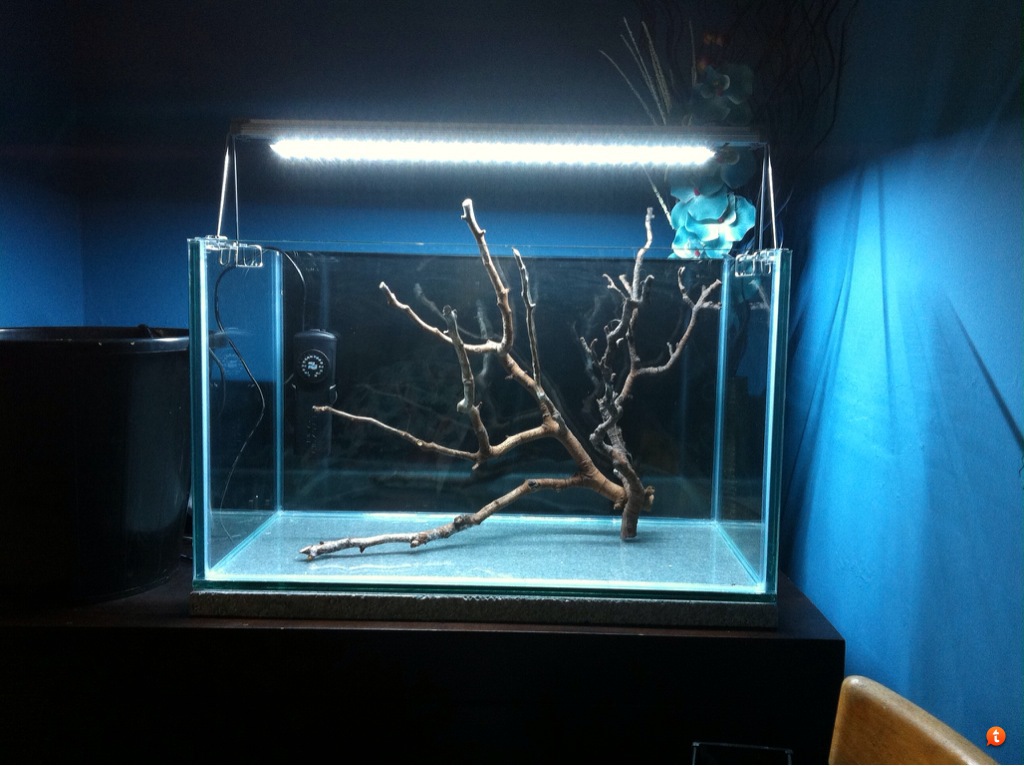