Has anyone ever toyed with other microsorum species in an aquarium? I don't mind being a guinea pig but if people have tried it would save some effort 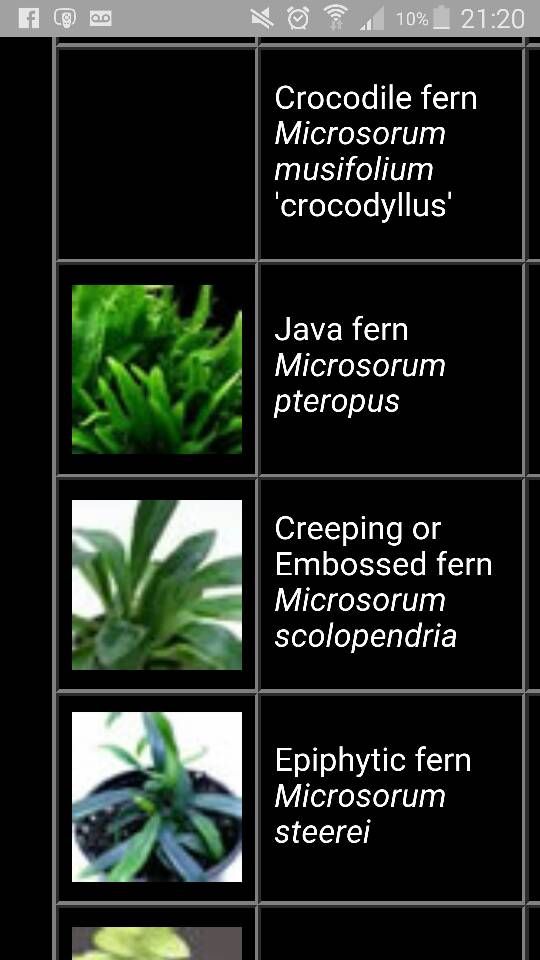 Sent from my SM-G900F using Tapatalk

Not in the tank, never found anything about it, till now but above in a hang filter.. You have to search the forum for LondonDragon and his shrimp tanks.. He had/has a uge Microsorum Sp. in his HOB filter..

As far as i know only the Microsorum Pteropus is realy suitable for long term submersed conditions. There are quite some different kind of Pteropus around. So there is enough diversity to not need any other Microsorum sp. By now next to the regular i've gathered " Sp. Needle Leaf Mini, Sp.Needle Leaf Large, Sp. Orange, and Sp. Philipino. There are still Trident, windelov, minor and some other (cultivars). All can also grow emersed but need rather a very high humidity anything under 90% and the fern will be in trouble, might do better after addapting a very long time.

You might be lucky some Microsorums doing relatively good submersed for some moths but probably not for ever. The best changes you probably have with the thin leaved Microsorums they need the most humidity off all because this leaf evaporates water relatively fast. For example the M. Musifolium - Sonny Crocket Fern is a thick leaved Microsorum sp. this variant can take lower air humidity much better, but probably will do less good submersed and melt away sooner.
Cheers,
Marcel..
Tanks for watching.

I tested some, long time ago - inc. the 'crocodylus', that is produced for a potted plant - and didn't find any of the tested ones doing well enough, to go to production. Can't remember any names, exept that crocodile-one with the odd name.

I have actualy no idea how many generations it would take, but i have just such a feeling thinking about it, that it aint such a far feched thought.. By origine lots of ferns we use if not all arn't truly aquatic. They only addapted to do so in case of flooding emergencies. So at one time a terstrial ferns spore ended up at a river bank or emersed stone in the river it sprouts there and grows and gets pounded by water all the time and periodicaly submersed and emersed again.

That's the way it naturaly addapted to being submersed for longer periodes, it probably has something to with exchange capicity of the plant, most likely co2 (air)

Taking a plant that grew a few years of it's live emersed and suddenly dump it in the water can't be a recipe for succes. That is even oftenly true for emersed grown auquatic plants.. That a plant can change addapt even if it's very slowly is doubtless all around us. I guess if you find spores from any kind of Microsorum and grow and propagate them relatively wet and keep dipping it submersed each time a little longer and do the same with it's ofspring you might have succes in a few years and have a other Microsorum sp. as aquatic. Plants addapt relatively fast in compared to other life forms.. Ferns are pretty primitive like mosses, probably few generaions is enough instead of thousands of years.

You just need to have the patience to go trought the care for it. And i wouldn't be surpriced if you where succesfull.

But dumping a plant from the garden centre straight away submersed most likely will not.
Last edited: 30 Nov 2015
Cheers,
Marcel..
Tanks for watching.

zozo said:
You have to search the forum for LondonDragon and his shrimp tanks.. He had/has a uge Microsorum Sp. in his HOB filter..
Click to expand...

Hi Paulo, yes i remember that awsome Ikea fern.. Red the topic with great intrest... Already have a HOB filter in use, waiting to copycat your idea, but till now i didn't find a suitable Microsorum to put in. One day i'll walk by one that does.. Actualy i was planning to do it with a Crocodilo, but these are not so trendy anymore nowadays, only can find them relatively expensive ex. shipping via internet. So i did put he idea on hold till i find some..

Found this.. I think it could do realy nice, climbing and covering the wall behind my new bigger tank.. Not sure if i go for it. But it's tempting..
Cheers,
Marcel..
Tanks for watching.

I've just bought a reasonable collection of regular java fern cultivars. It's a shame no one has put much time into trying different sorts out. The supplier I showed is selling them at £5 each so might be worth a punt yet

Sent from my SM-G900F using Tapatalk

Here is a new kid on the block!? It seems..
Microsorum sp. Thunderleaf

zozo said:
Here is a new kid on the block!? It seems..
Microsorum sp. Thunderleaf

I have both from http://www.ukaps.org/forum/threads/set-of-very-rare-and-not-rare-micrisorums-and-bolbitis.38042/
I've split them between two low tech tanks though.So will take a while to grow .
Neil

Nelson said:
I've split them between two low tech tanks though.So will take a while to grow
Click to expand...

The reason why they are so rare i guess.. Nice score..

Definitevely copied the list for the names.. Always good to know what you're looking for. Thanks for sharing..

Btw.. Care to swap when the time comes.. If you care to extend you're collection??.. I have, Extra Large Orange, Needle large, or needle mini (no idea which of the 2 you have) and philipina java's in the collection now... I'll have enough of all, so when you are ready i'll a'm wihtout doubt..
Last edited: 2 Dec 2015
Cheers,
Marcel..
Tanks for watching.

There are SOOOOOOO many variations of Mic. pteropus. Seems like this species is much easier doing variations, than average. Basically, I think we could all have our own, "special" variety........
- narrower- /wider leaf-form.
- straight- /divided- /multidivided leaf-form.
- longer- /shorter leaf.
- and colour is variable, too.
All I have tested (and they are plenty ) are pretty equal in demands (= easy- /very easy to grow). Not all are equally virile, though - and several varieties are very unwilling to grow emerse.

True, i see the needle mini not realy fond of the dry start.. Not dying but also looking particular atractive.. So slender it seems it can't take the gravity and heavy moist at the same time. I suspect it easy to sucumb to fungal infection like that.
Cheers,
Marcel..
Tanks for watching.

zozo said:
Btw.. Care to swap when the time comes.. If you care to extend you're collection??.
Click to expand...

Would love to .
Did you see this thread ?.Start from page 102 . http://www.ukaps.org/forum/threads/plant-encyclopedia.38529/
Neil

Yes i've seen it before, but forgot.. Thanks for the reminder.. It's in my favorites toolbar now... Awsome cataloge... We could need a private Jet..
Cheers,
Marcel..
Tanks for watching.

K
Can anyone identify this?

Does anyone have an indoor carnivorous plant garden?
2 3