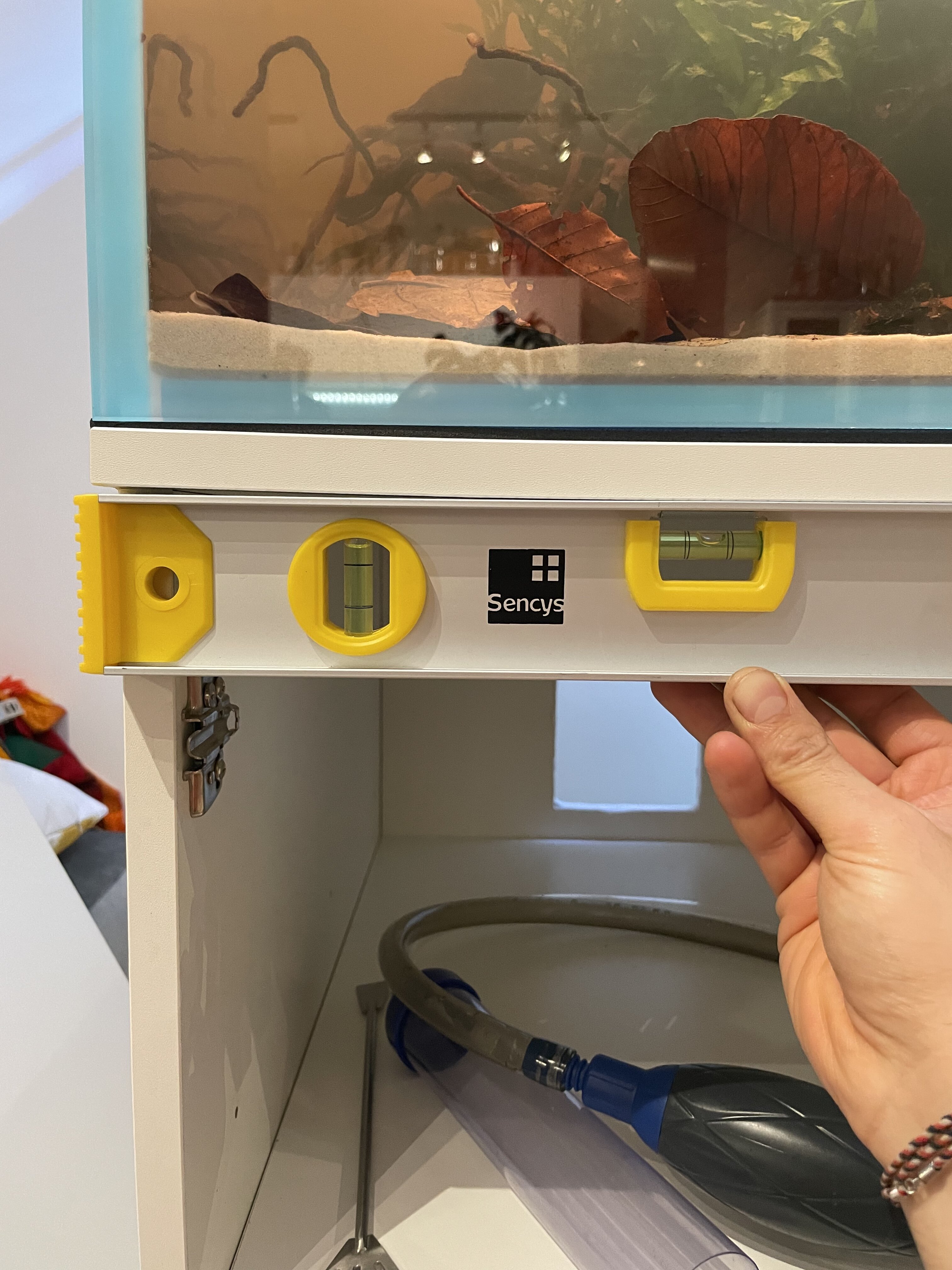 Hey guys , I just noticed that one of the corners of my aquarium stand is curved upwards 😞
I do have an aquarium mat , that it’s seems absorbs the gap, but still - how big of an issue is this ?
We are talking about 650 L - 15 mm glass

Can you take a picture without the spirit level. A pic of the whole stand, from the front at that height, showing how it is put together as well. Then we can see what bracing is under the tank.
That is quite a gap between tank and top. I would be concerned. You might need more bracing under the stand top.

After close examination, I saw that the front is bowing in the center. Like on the photo bellow (less than the photo but there is a visible bow)
Any thoughts?

Id ask manufacturer and lower water level for a while to lessen risk... thats a lot of water if something goes wrong!

So the floor is straight, I measure it.

I called the manufacturer and he says the problem is with the self-leveling mat... the mat, according to him doesn't give a chance for me to see where the loose contact is and correct it...
It might be the case, but what I can see is that the top is banding --> Meaning to much weight is applied on a too thin of a top ..

Hi There
As mentioned above, it is very difficult to confirm whether something is straight unless you evaluate its full length so if you put a straight edge from tank end to tank end on the floor, check that it is level and then see if there is a gap below it, this should tell you if your floor is bowing. If it is, the cabinet will naturally follow that bow.

If the floor is bowing then I would advise that you place a thick, solid piece of wood the same size as the cabinet, underneath it to help distribute weight and then re-level your cabinet feet. (I’m using 3/4 inch hardwood ply on my 150g for this even though it has a steel frame) can’t see whether you have adjustable feet below the two middle supports. If not, add some.

The above can be re-done for the top of the cabinet to see if it is just the top bowing, in which case additional internal supports may be needed to bring it level.

I personally wouldn’t recommend leaving it as is with this much weight.

I don't think you need to worry as long you have a mat beneath. Purpose of the mat is to even out uneven surfaces under the tank. For total peace of mind you may put a single block of wood under the tank and the mat above it. The wood looks like "engineered wood" which is very weak. Was this supplied with the aquarium? Very neat silicon seams / clear glass. Care to share name of manufacturer? Just curious.
I hope you got the old broken tank replaced! Is the new one from same manufacturer?
EDIT: You do need to worry!
Last edited: 11 Nov 2021
Tank1: 15 mid sized Mbunas 36"x24"x21" LHW with top DIY sump, 2 DoPhin P808 (mechanical) 2 BCBs and 4" coral substrate with plenum. 250W Aqual Platinum heater. Hikari pellets of different sorts.
Tank2: 8 Angels, 8 mollies, 5 Danios, 3 Serpae Tetras, 1 Blue Gourami in 30"x20"x13" LWH. Top DIY sump with Dophin P808 (mechanical), 1 BCB, 3" coral substrate (needs to be replaced) and plenum. 250W Aquael Platinum Heater.
My whole stroy:
My DIY aquarium build, the good the bad and the ugly! (Anoxic Filtration) | TechEnclave - Indian Technology Community
S

I think you NEED TO WORRY! muy pronto too. That stand looks to be some kind of press board and isnt strong enough for that aquarium. It might have held up for awhile but its SCREAMING at you its ready to if not fail,at least put so much stress on the glass aquarium you will see seems break possibly.
Get it off that.. on to a new strong stand and put Styrofoam sheet under the bottom glass

I think I would try the plywood under the stand as @Kirsty suggests. Levelled it will act as a plinth and should tell you whether it is a faulty cabinet . You only need to look at furniture reviews in general to see many faulty cabinets get through the inspection process. Proceed with caution as above post
M

I'm with @Stan510 on this one... That cabinet just seems too flimsy for well over 800 kg (I gather the empty tank probably weigh 150 kg)... dealing with such a large volume of water, I'd rather error on the super safe side... at least it should be leveled out so there are no sign of structural strain, but if you do that, you might as well get a more solid cabinet.

PARAGUAY said:
I think I would try the plywood under the stand as @Kirsty suggests. Levelled it will act as a plinth and should tell you whether it is a faulty cabinet . You only need to look at furniture reviews in general to see many faulty cabinets get through the inspection process. Proceed with caution as above post
Click to expand...

Looking at the pictures, how level the floor is has little to do with the bowing of the top of the stand. That is due to the strentgh of the cabinet's materials (probably chipboard, like most kitchen cabinets in the UK), the spacing of the vertical supports and the compressibility of the leveling mat.
Putting ply between the cabinet and floor WILL NOT stop the upper "shelf" from bowing.
Putting a sheet of 12mm (or 18mm) ply between the tank and the cabinet might.
Whether replacing the leveling mat with styrofoam would make much difference is debatable, as they both do the same job.

Whether the bowing is something to be concerned about is also dificult to say.
Once you start getting away from the four fertical supports, the upper "shelf" provides almost no support for the tank. All the load bearing is in the vertical pieces. By deforming the upper "shelf", the vertical supports are pulled slightly together, which moves them slightly off plumb, and therefore acts to reduce the cabinet's strength. But the deflection will be very small, and probably of a similar degree to manufacturing tollerances and possible that cause by environmental factors. So whether it is significan is unknown.
The floor does look pissed, but not in a way that will cause the bowing shown, and it may be down to the camera angle anyway.

If you want to find out if the floor is level, you're better off putitng the spirit level on the top edge of the tank itself, as the glass will not deflect significantly, is more likely to be perfectly straight, and will give a reliable datum for the horizontalness of the cabinet. (It also won't matter how long your spirit level is.) However, it will only tell you how level the floor is between two out of the four verticals are, and it won't tell you which.

The biggest question for me is whether the stand was built for that tank, and by the same company?
If so, does it have a waranty?
Old Journal : Tall 250l - Y llechen ogof
2½' deep 250L tank. Low tech, no CO2, no EI.
Forum threads are like children. You create them, try to furnish them with all the right information, and then send them out into the world, hoping that others will help them grow and friendships will be created. Usually it all works out well, but sometimes they will attract the wrong sort of attention - bullies and bigots - sadly that's just part of life. And ultimately, you have to acknowledge they will grow into their own entity, have no connection to their own beginning, you won't recognise them, and they'll have nothing to do with you. 🤔
S

No,I meant styrofoam for his next aquarium stand. Also,those pressboards warp if they get wet. OP might have had some accident where the water overfload and got the wood under the aquarium wet. Pressboard then bloats and bends and becomes much weaker forever.
Glass aquariums unlike Acrylic aquariums have no give to them..stress builds and builds until one day a large crack that recreates the parting of the Red Sea happens in an instant.

Am I right to understand pressboard can refer to OSB, chipboard or MDF (amongst others)? In my experience, mass produced cabinets are melamine (or similar) faced chipboard. I agree that water damages such materials, but that would most likely occur at the edges of exposed boards, and the melamine would start to lift and/or discolour: I can see neither in the photo of the distortion.
Old Journal : Tall 250l - Y llechen ogof
2½' deep 250L tank. Low tech, no CO2, no EI.
Forum threads are like children. You create them, try to furnish them with all the right information, and then send them out into the world, hoping that others will help them grow and friendships will be created. Usually it all works out well, but sometimes they will attract the wrong sort of attention - bullies and bigots - sadly that's just part of life. And ultimately, you have to acknowledge they will grow into their own entity, have no connection to their own beginning, you won't recognise them, and they'll have nothing to do with you. 🤔

What kind of floor is it? Is it laminate with soft underlayment? Looking at the picture and seeing the cabinet standing on several (8) feet and seeing it warp and sack. I suspect a soft underlayment. All the weight is divided over 8 small pressure points, this is never a good idea if there is anything soft underneath it.

If there is a soft underlayment then the best practice would be to remove the feet so the weight is equally divided over the cabinets surface area.
If the floor is hard and level then it's obvious that the cabinet is too poorly constructed to take the aquariums weight. It might be the feet under it are too soft material and unequally compressed.

Anyway, all things I can't judge from a picture, I only see 8 feet, and feet under an aquarium stand always sounds my alarm bells.
Cheers,
Marcel..
Tanks for watching.

foxfish said:
I dont think the OP has been back so it is probably pointless replying but I still believe this is to do with the floor.
The cabinet has just followed the shape of the floor, it is not really about it being level, it is about having a dip in the middle.
Click to expand...

You are probably right, I haven't noticed the starting date...

It indeed seems to be the floor and the cabinet is stressed and dipping in 3 places exactly in between the pressure points (feet).
Cheers,
Marcel..
Tanks for watching.