The replacement bulbs work. But soon after fitting, I found the ballasts were running very hot, so much so that it's warping the plastic on the cover of the lighting, and the lights themselves cut out every so often as I assume the ballast is shutting down because it's overheating.

Not very happy leaving things like this, it's a fire risk apart from anything else - and also the setup is using as much power as it did before (LED bulbs should draw less power).

I'm struggling to find any technical information about these Arcadia T8 LED bulbs. I'd like to know if I can bypass the ballast and just directly wire them to the mains, but don't want to try anything like this without understanding what input's they're expecting! They've got 2 pins at each end, and I don't understand what each connection is meant to be for.

Anyone got any experience of these bulbs, or experienced this overheating issue?

Look here how to wire up LED tubes, bypassing the ballast. Note that not all tubes and electronic ballasts will work together.
https://www.tlc-direct.co.uk/Products/LTT29W.html

It specifically says that the Arcadia T8 LED lights are not designed for use with electronic ballasts, which is probably why they are overheating. Electronic ballasts generally drive the tubes at high frequency which is why (T5 HO fluorescent tubes at least) are more efficient than LED's in lumens per watt measurement.

The critical thing with LED replacement tubes is power is only from one end as shown in diagram 2 above. The two "no power" pins are connected together to pass power through for in diagram 1 to light the LED replacing the starter in a magnetic ballast setup.

If you wire as in diagram 2 you must remove the electronic ballast and make sure you plug in the tube the right way round as power is only taken at one end.

Personally if I was doing it I would fit T5 HO tubes and holders and high efficiency electronic ballast.

Thanks - useful information there. The latest version of the Arcadia T8 LED lights (which I have) claim to be compatible with electronic ballasts. Looking at the wiring diagrams, I wonder if I actually have a magnetic ballast, as it only has a live wire going in, and one wire coming out, and there's a starter (I assume that's what it is, a cylinderical component in the circuit). I don't quite understand what the "Replace LED starter" means - what's an LED starter - why would an LED need any kind of starter?

Does it matter which end of the tube I supply power to? From memory, I don't think there was anything to distinguish the ends of the tube, so they could have been inserted either way round.
P

I understand now that diagram refers to a specific product on that page you link to, which comes with an "LED starter". I don't have any of that with the Arcadia T8 LED lights I've got. Given it's the ballast which gets hot, I'm not sure these instructions are much help (they don't remove the ballast, and require an LED starter which I don't have).
Given the Arcadia tubes claim to be compatible with electronic ballast though, perhaps I can just proceed as if I were dealing with an electronic ballast, and bypass completely and just connect directly to mains. Just like to hear of anyone else that's done it before I make an expensive mistake!

Paul Burton said:
which comes with an "LED starter".
Click to expand...

The "LED starter", in the above diagrams, is a short circuit, that connects the live, in diagram 1, from the right hand side of the tube connections to the left hand power inputs. Actually not a real short circuit but generally a thermal resettable fuse, so that if you plug it into a normal T8 circuit it over currents and open circuits, no damage done, but in a lower current LED situation allows enough current to pass to light the LED.

The handy thing about this setup (diagram 1) is it doesn't matter which way round the LED tube goes it will work, unlike diagram 2 which requires the tube to be inserted one way round only.

Sounds like your ballast is magnetic, two wires and having a tube starter. The turning on and off the ballast (we assume it is the ballast) is due to its thermal fuse in the ballast tripping and resetting when cooled down.

I couldn't find any info on the Arcadia T8 LED tubes, wiring diagram, not even lumens which is very disappointing as you can't even compare light output to existing T8 tubes. I would assume its wiring would be as in the diagrams above, so that it can be retro fitted to T8 magnetic ballast systems.

I would assume you could just wire up as in diagram 2 and connect the live and neutral directly to the tube and not have the ballast in the circuit at all. Generally, from what I have seen one end of the LED tube indicates which is the power input end, often clearly there is something indicating which end is power input.

I have these in my ROMA 200 and things are cooler than they were with the T8s.
P

The lamps are definitely cooler. But have you still got the ballasts (ie. you just replaced the bulbs)? It's the ballasts which are generating the heat for me. No idea why they should do that? Perhaps they're somehow dumping the "excess" (ie. fluorescent-LED) load as heat?

Yes, I just took the T8s out and put the Arcadia LEDs T8s back the same way the others came out.

When you say "the same way" - what do you mean - is one end different from the other? Maybe that's my problem?

Here is what is in a magnetic ballast and the associated wiring looks like. The ballast is just a coil of wire on a laminated iron core (may have an over temperature sensor in case of fault). As these cost b*gger all to make, usually less than a £1 this is why they are so common. We paid £7 each for triple 2ft fluorescent tube ceiling tile with 3 ballasts, 3 starters and 3 tubes, as replacements at work. 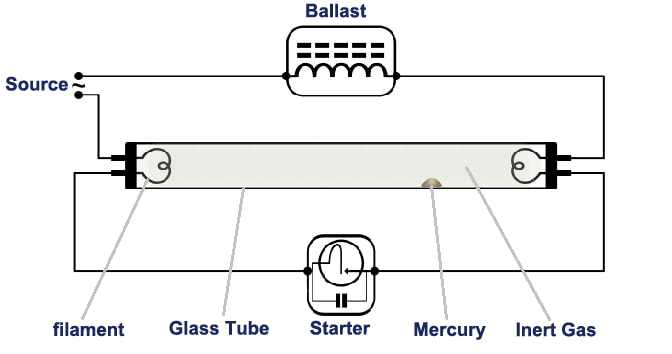 The way the system works is

Have you contacted the supplier?
It might be a known problem that they can advise you on, or it could be a faulty tube which they should replace.
P