Hello everyone, finally decided to crack on with my 2nd aquascape. Was a bit reluctant after my 1st catastrophe haha. 60ltr tank lasted about 3 months before everything died!

. Its a Juwel Rio 180 I believe with twin t8 fluorescent lights currently housing 2 powerglo bulbs( will be upgrading to a fluvalsky 2.0 after Christmas is out the way.

I thought I'd start a journal as I'm expecting the worse

haha. This way one of you guys with a better knowledge of the hobby will guide me in the right direction. This is by no means a pro scape. If anything it's pretty amaturistic but I gave it my best.

Red lava rock as the hard scape. Westland organic topsoil as a base behind the rockd to build up as it was way cheaper than using aquatic soil. I topped this off with a mix of JBL proscape plant soil and colombo flora base pro. Finished off with a light silica sand foreground.

Lights currently on 10hrs a day.. I have 3 tanks plugged into an extension plug thats plugged into a timer from the wall so the light come in when the community tanks come on
Injecting co2 via a fluval 95g pressurised co2 kit at about 3-4 bubbles per second. Turned on and off manually 1 hour before lights on and lights off.

Here's a pic of me playing around with the hardscape(dont worry the towel was removed....I think?)

Few more pics of the build...

And the almost finished piece. I want a nice big bushy plant at the back right ad theres a big empty space there but not sure what to put. I was thinking maybe some type of valisinaria or tall bushy aponogeton?? 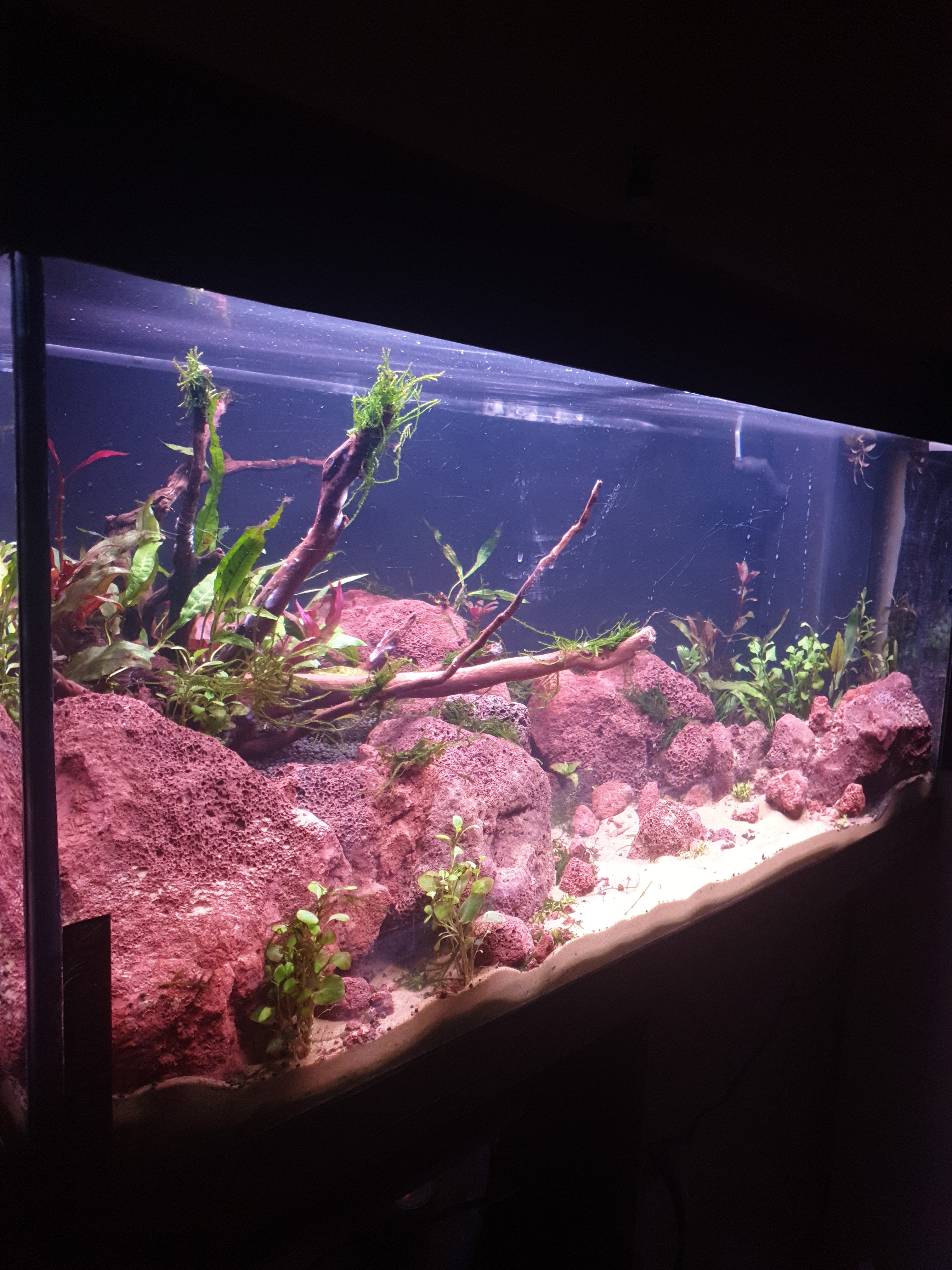 Hello everyone. Thanks for taking the time to read through my journal. Tomorrow will be the end of the 2nd week after planting. A few of my plants are showing signs of deficiencys and/or dying. This is where my knowledge is limited! How to I go about trimming my plants? I've read that you cant go mad as the plants aren't fully established and may not recover whereas on another site I read to go as mad as one can and remove any/all dead/dying/deficiency leaves? A few stem plants have lost some of the lower leaves. Some are yellowing/browning and some esp the crypt has melted. I know crypts are prone to melting so I'm hoping some of it will grow back. I dont have the most powerful lighting being a twin t8 with 2 power-glo bulbs(895mm) however I am injecting co2!

Hopefully one of you fellow aquatic gardeners can point me in the right direction. Also please feel free to question me/my methods if you feel I'm doing something a bit out of wack?. I am still very new to this and will happily and greedily take all the help/knowledge I can get. Thanks again!!

Will upload some pics when I'm home of the plants in question.

- turn back the light. Go just the T8 tubes for 6 hours a day, gradually increase to 8 hours.then think about turning your other lights on. Less is better in the early days.

- c02, have you got a drop checker? It should be lime green at lights on. Put it on perhaps 3 hours before lights to build it up. Off an hour before lights off.

- your co2 kit will be hellishly expensive to run on a 180L tank and I assume it hasn’t got a solenoid so not controllable at all? (Which ruins my comment of timing above)
Perhaps look at a system that will accept a full size bottle. To give you an idea expect to pay c. £25 for 3kg of gas, so the £150 investment should pay for itself in no time.

- cut off any melting leaves to remove waste matter.

- more plant mass, as much as possible, big fast growing stems along with floating plants.

Hope the above helps. Each is a separate topic in its own right, but I’ve just I’ve given you the headlines!

Ps. What shops have been advising you?
A

Hi siege, thanks for the suggestions. I'll put the tank on a separate timer for 6 hours. You are correct in your assumptions I unfortunately do not have a solenoid. It's just a basic fluval 95g disposable. Yes I do have a drop checker and it is lime green when the lights turns on. I turn it off 2 hours before lights off as it takes that long to get it back to blue by lights off. I have been looking at upgrading to a better/more professional set up but with limited expenses I thought a better light would of been a better choice to buy 1st? Please correct me if I'm wrong haha!

. The soil I'm using recommended a 50% water change every week for a month. The only reason I've left it 2 weeks was to let the plants establish first before disturbing them again.

I have quite a few bare stems(lower half of plant) and will have more once I've trimmed some leaves. Should I leave these bare stems? Will new leaves grow out of them? Or should I top the plant. Pull up the stem and replant the top?

1st purchase should be co2, light second. Work with what you have got when it comes to lighting. You may find what you have already got will be adequate.

Proper co2 should be the priority and save you money in the long run.

Water changes at start up -

The trouble with using non-propriety soil is you donot know where they have got the source of ammonia from. So you are a little bit in no mans land, so best bet is to to do daily water changes for a month! (Similar to as you would for the super rich ADA Amazonia).

Regarding plants, lower leaves dieing off, depends on which plants. Post some pictures of a few plants is my best suggestion.

Will be worth your time having a day out, Scaped Nature in Norwich (scapes but more terrarium, wabi Kusa) and Aquarium Gardens (full on scaping) in Huntingdon. You’ll be able to see sapes in real life, get loads of info and consider where you what your tank to go.
A

I used organic topsoil as a base so hopefully that leech any ammonia and I topped it with jbl pro scape soil. Should of kept the bag...

will deffo reduce the light duration. With regards to the water changes should I use de-chlorinater or will just tap water be safe as there is no fish. 180ltr daily water changes is alot of d/c haha. I'll post some pics in the next couple mins of the plants.

Yes use a dechlorinator - Seachem prime I sure th best.

It’ll protect the filter bacteria.
A

Sorry for the delay. Hers some pics of my lobelia's, crypt, alternanthera and the hygro lancea.. one of the lobelia cardinalis dwarf has decided it didnt like where it was planted and has gone on a little trip! Haha. Thought I'd take a picture as it better shows the parts I mean. All of them are like this.

Also got this brown stuff forming on most of the plants in direct flow of the filter. It's also on the diffuser and the co2 tubing. It rubs off very easy and it doesn't seem like algae. There are traces of hair algae on 1 or 2 plants but it's not got any worse or spread over the last 2 weeks. You can see it on one of the plants above and on the 2 below it looks like tiny brown fibres. Internet search suggested it came from the spider wood and will disappear eventually.

Just picked up 4 more plants and a new timer plug so I can set the lights on that tank separately rather than 4 tanks on an extion lead plugged into 1 timer.

Just grabbed a large echinodorus ozelot green, a nomaphila strica fleur, a hygrophila guanensis and a bunch of vallisneria spiralis
A

Hi guys. This may sound silly but Is there a limit to how dense you can plant plants?? Like how big should the gap be between stem plants or can I plant them in bunches? I know there grown in bunches in the pots but I though this would only damage them over time due to restricted growth space

Hi, plant stems in bunches of 3 usually. You can plant densely. As they grow you can trim off the tops and tuck them in to the cut stems. Do this repeatedly and you get this. 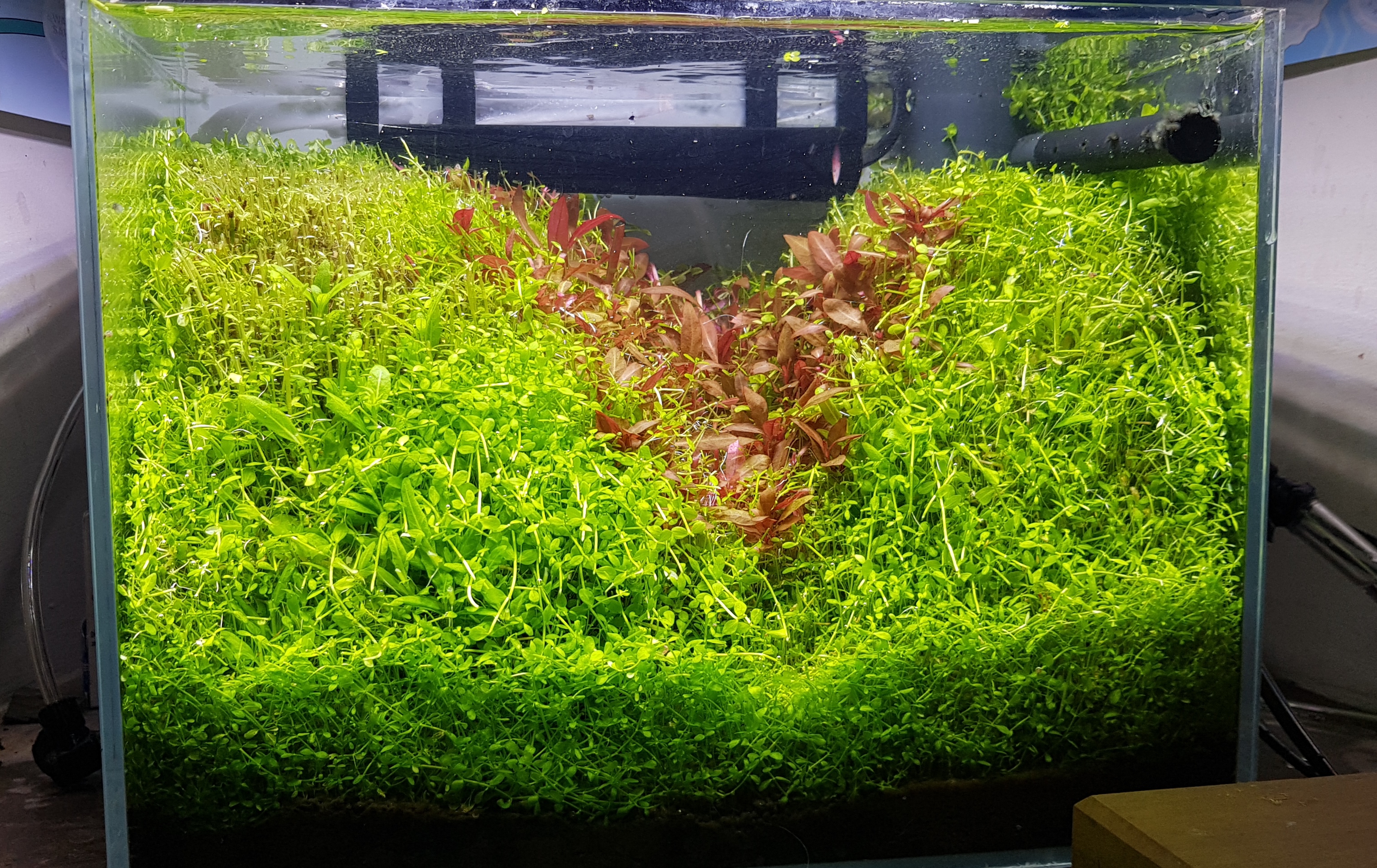 Wow. That's dense! Dont know if I want mine that dense haha but thanks for clearing that up. I'm going to plant the new plants today and move a few around as I'm not happy with the placement and there planted about an inch apart. I'll move them closer. Give me more room for planting. Thanks for the advice
A

A week has passed. Just thought I'd show the progress. Lots of new growth on the plants.

Hi guys, just added 4 more plants and re-arranged the alternanthera, hygrophila rosae and a couple of bunches of crypt to make it more dense. The plants are a pogostemon erectus, pogostemon helferi, cryptocoryne nevelii and a lagenandra meeboldii red.
Last edited: 28 Dec 2019
A

Quick question to any fertiliser experts on here... I'm currently using Colombo flora grow plant fertiliser along with injected co2 at 3-4bps. I'm looking to change to seachem as they do a 3 bottle kit in my lfs for pretty much the same price as the fertiliser. My questions are...is there any differences between them? Would I be better off buying something else completely? ?? The ferts I'm using at the moment (colombo) says to dose 1 pump(5ml) per 5ltr weekly. I dose daily at 1/7th of the weekly dose so the ferts are kind of on a consistent level...180ltrs÷5 = 36pumps per week. I divide 36 by 7 = 5.14 so I daily dose 5pumps per day on my way out the door to work. Zero hassle just pump and go... if I go ahead with the seachem trio(fert,iron,carbon) can I mix the 2 bottles together (probably wont use the carbon in this tank) at the correct measurements or will this be unstable For example the flourish states to use 5ml per 250ltrs once or twice a week. I would probably go twice a week as I do have some advanced care plants and I'm injecting co2 so that's a total of 10ml per 250ltrs per week. The iron states to dose 5ml per 200ltrs every other day or as required. So if I was to do that every 2nd day(3.5 times a week. 7 times a fortnight) it would work out to be 17.5ml weekly. So could I add 10ml of one plus 17.5ml of the other = 27.5ml. Divide that by 7 = 3.92 and add that daily to the tank as I dont really have time in the morning so stand there for half an hour measuring out individual ferts. Sorry if this dont make much sense I'm useless at trying to describe things

I don't think you can mix them as it causes something (experts?) to drop out of solution (if that's the right terminology?). I totally get the desire for it to be an easy job to just pump x number of pumps rather than measure out. I have the same approach - having reused pump bottles for the same purpose. Your post is causing me to ask the question though - if the Colombo is working, and the pump on the bottle is working for you to and its the same price - why switch??
You must log in or register to reply here.
Similar threads