Barb Island. its all over.

So was a busy day today swopping out the g6 for an eheim 5000 and diy reactor. Day didnt start well with starting the syphon to WC and only realising after a minute or two i didnt put the end of the hose out the window!! DOH!! This really did set the tone for the rest of the day sadly! Anyway after a very frustrating time, a run to MA for better hosing, loads of leaks and most frustratingly breaking my twin co2 splitter and bubble counter by over tightening it. 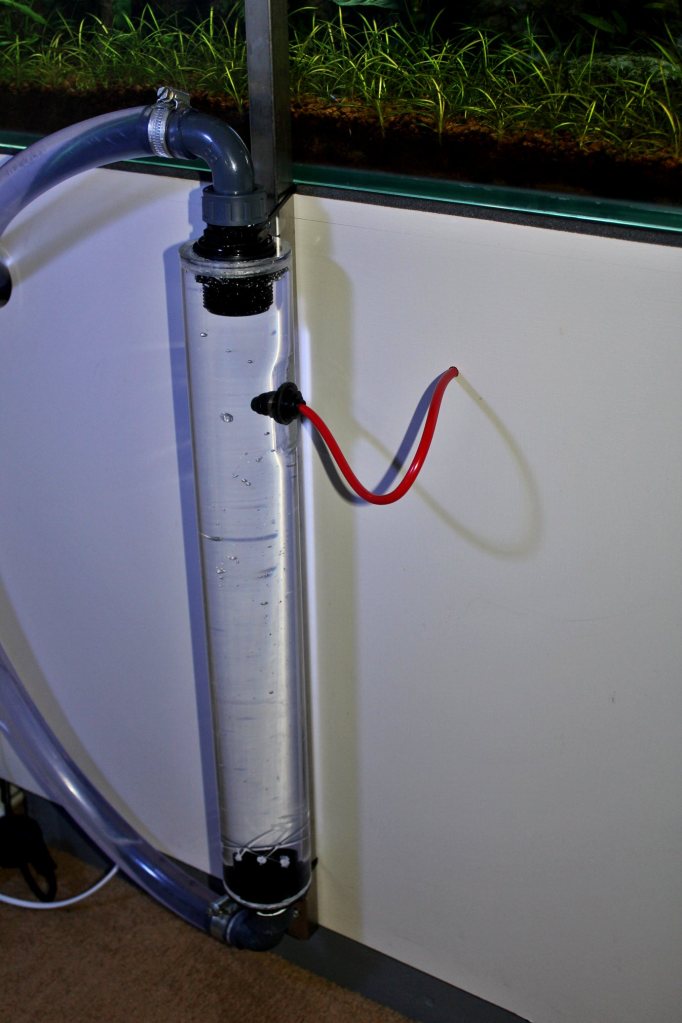 So pump is running, no noise once door is shut, diy reactor is doing what it is supposed to and all is well.... almost!
Im a little baffled so maybe someone could offer a solution...
When the pump is running the spraybar has an uneven spread, out of the water the far end of the spraybar will hit the front glass on the lowest setting yet the outlet end of the spraybar it only squirts out about 3" ????
im quite stumped what could cause this??? Which is annoying as the whole reason to change was to get even flow across the whole tank!! 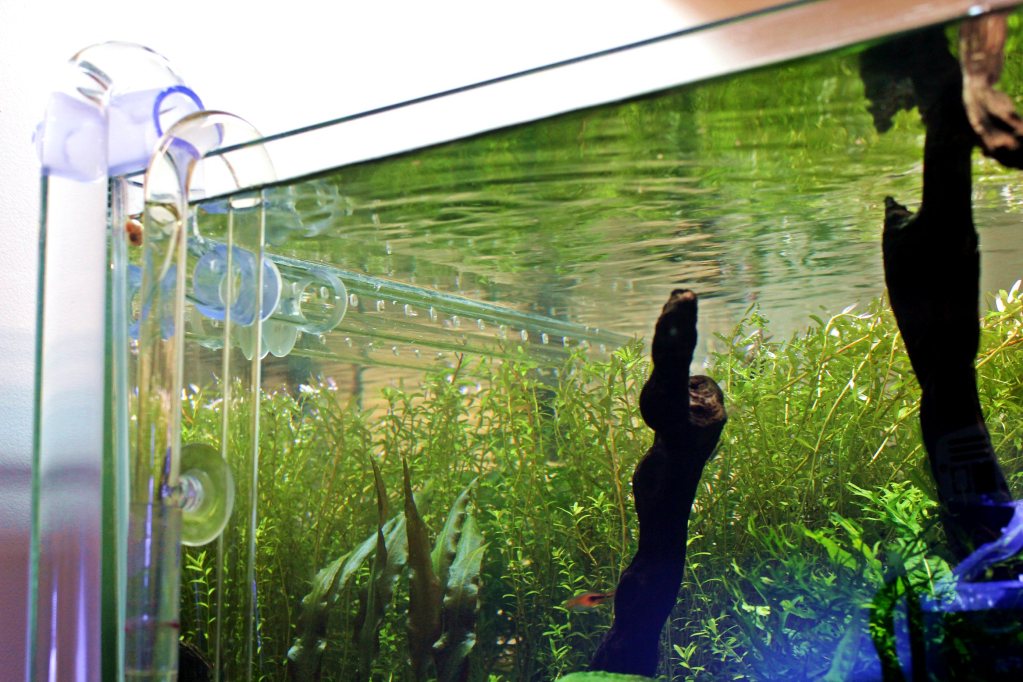 any optinions will be very welcome

I'm guessing the only reason one end flows more than another is down to water pressure being uneven along the length of the bar - I wondered if my Tetra spray bar would do this when I lengthened it with a spare bit of Tetra spray bar, however it still flows evenly (to my eye anyhow!) across the length. Is yours a DIY one?
120 Litre Juwel Primo LED

ok, ill get some tape sorted today and have a play then drill a new one once i figure the number needed. Thanks fox.
120cm NA - Splash tetra Paludarium
60cm Taiwan Bee not so nano
120cm NA - Asian Dreams IAPLC #251 - closed Previous journals in my bio

I would cover up every alternate hole for now. Looks like you have too many holes judging by commercial spray bars?

I had a little play with the spraybar today, covered 4 holes and this seems to have solved the issue so will redrill a new bar soon.
Reactor is working well however if i have the flow as high as i would like then some larger bubbles get pulled through too quick , i think ill add a shower scrunchy which i had allowed for by adding criss-cross acrylic guard before the outlet, this will slow flow slightly but should increase co2 efficiency (still have another 2500lph to play with, overkill :? )

Had some pearling yesterday so feel the distribution is better, also added the old classic Microsorum pteropus to the left hand side which works well and will change the wood on the left side which ive never been happy with.

One downside to the island is that with so much space within the island the fish are happy playing around in there, darting in and out rather than being on display all the time, think i will add another dozen harlequins soon.

Would also like to add a handful (8) odessa barbs but not sure if the current barb population would be too happy...??
Currently 10 checker barbs, 12 cherry barbs... any thoughts if this would work??

Reactor seems to do the job, long time since ive seen pearling in this tank and never tank wide 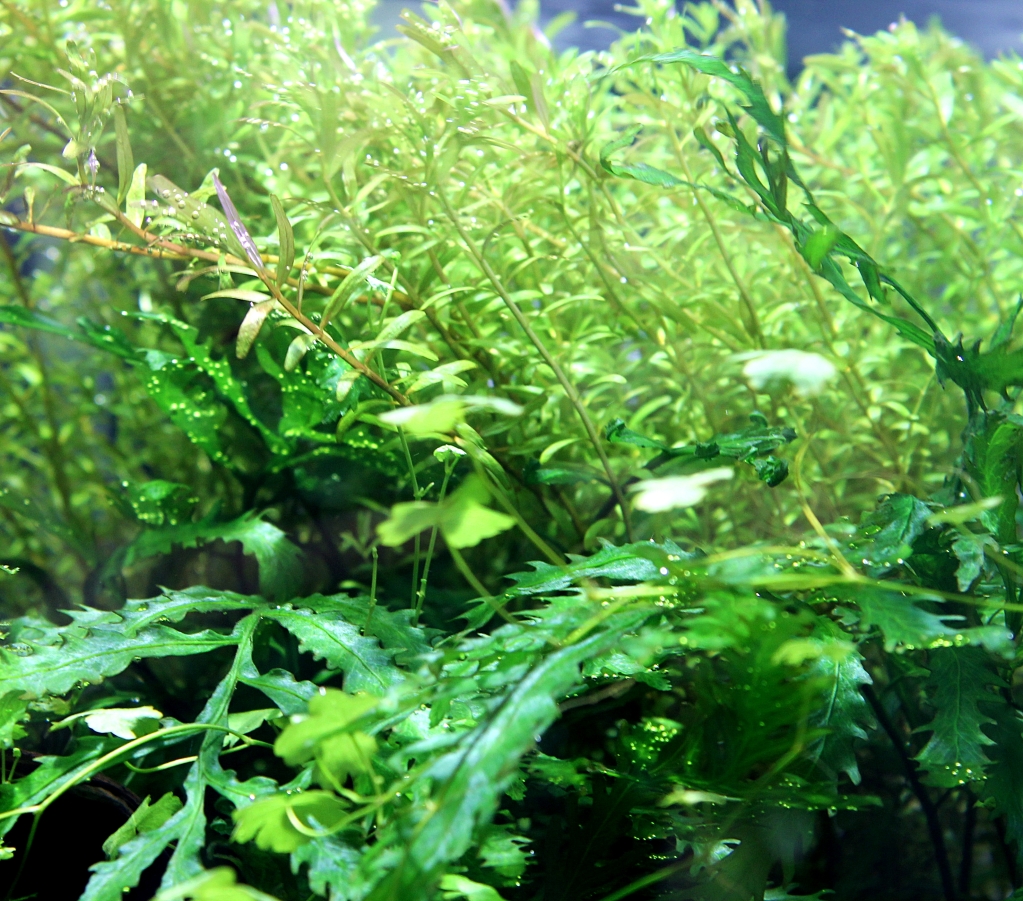 Hi Iain that looks great Mr ! I wish I could get pearling like that, lol. As for Odessa barbs, they actually get quite big unless u are happy to swap them out before that happens. I found them to be pretty bossy too, though lovely to look at.

cheers chris, im really happy that certainly for the time being all is well... already planning the next scape

I think i am going to chance some denisonii :? instead of the odessa unless i get bored then i might have both hope they dont all jump out!!
120cm NA - Splash tetra Paludarium
60cm Taiwan Bee not so nano
120cm NA - Asian Dreams IAPLC #251 - closed Previous journals in my bio
A

the denisonii are for this tank ? they can get even bigger than the odessa, lol . lovely fish though


easerthegeezer said:
It is 300 ltr so should be fine for a while... Then I'll just have to get the 180cm I keep dreaming about
Click to expand...

Oh sorry Im getting confused, thought we were talking about your 80cm

It's always smaller than you think...


pariahrob said:
It's always smaller than you think...

Skip the 180 mate, EVERYONE has a six footer. Get an 8 footer and join the big boys, lol.

easerthegeezer said:
It is 300 ltr so should be fine for a while... Then I'll just have to get the 180cm I keep dreaming about
Click to expand...

Oh sorry Im getting confused, thought we were talking about your 80cm
Click to expand...

the tank is 90cm but also 75cm wide so still plenty of water mate.
Once the marine is gone a standard 90 dutch is next
120cm NA - Splash tetra Paludarium
60cm Taiwan Bee not so nano
120cm NA - Asian Dreams IAPLC #251 - closed Previous journals in my bio

Went to MA shelford today and bought a few tankmates.. i didnt really mean to do it so soon but you know how it is!!
Really wish i had another tank as they had the most beautifully bright diamond neon tetras ive ever seen, £3.50 mind! And an amazing crowntail fighter... think i need a bedroom nano now

Will post some pics and hopefully a video over the weekend.

Thought id see if i can figure out movie maker, its pretty easy dont know why i had so many issues first time round

First bit is the halide coming on, it burns in really green as i can only imagine an NAG green to do... sadly doesnt show too well on video though, looks more yellow. Would like to find a bulb that remains that colour without paying £100 a bulb.

Anyone know if you can change the movie settings on an eos 550d? seems to wash out the colour a bit..

what a great video or a even better scape! and you managed to get the music on Ok...

as for the video settings on the camera, i'm sure they mirror your settings in manual mode, i always have my exposure set at low.

they seem to agree with me here

Photographers can also take manual control over exposure settings, changing the depth of field and degree of motion blur to shoot more creatively. To provide the best possible video quality, highlight tone priority (HTP) can be set independently for movie capture, without changing any still image capture settings. In situations where the subject is further away, the EOS 550D Movie Crop function records with the central 640x480 pixel area of the sensor, creating an effective magnification of approximately seven times. The EOS 550D is the first in the EOS range to feature Movie Crop and gives consumers more flexibility to capture important moments which would otherwise be too far away.
Click to expand...

have a mess around with it, it should alter the colour rendition a little with the amount of light coming through the lens.
life is like a pot of HC
You must log in or register to reply here.