So to "cut" a long story short, my 3ft tank has gone through some 12 months of slight neglect. By this i mean to say i have had a light bulb blow out which is yet to be replaced, the remaining one is more than probably running on half power. I removed my inconsistent CO2 dispenser and transfered to my latest 2ft planted tank. Also i removed probably 90% of the plants from this 3ft tank. Water changes and fish welfare have been kept a high priority - so i don't want people thinking my negligence has occured in this manner.

Basically BBA has gone AWOL in this tank. Beutifull bogwood has become little more than big furry, puffy looking chunks of black wool. My stunning Anubias which spread all over virtually undetectable under a carpet of black, fluffy and furry algae. The few plantlets of crypts i left growing now appear to be wearing a thick black, fluffy and furry scarf of algae. So heres a brief image. 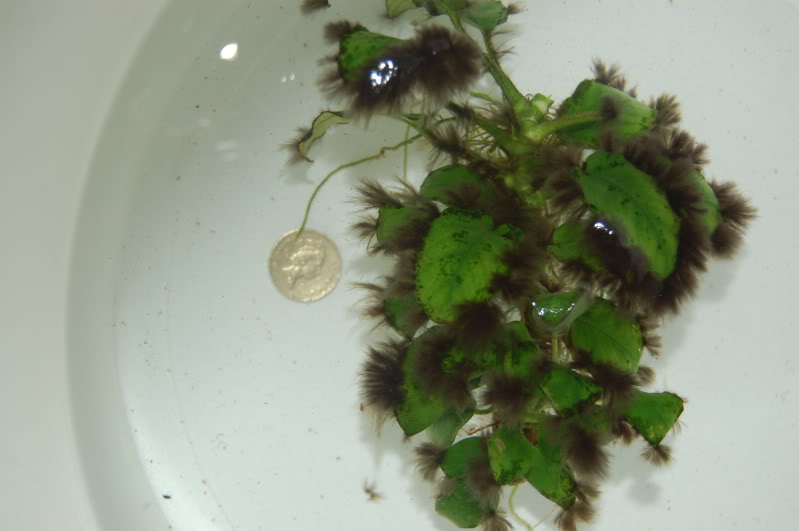 Â£ coin added for size clarification, believe it or not this is one of the lesser affected portions in my tank *sob sob*

Any more and i'm too ashamed to post it. I'm on a radical mission to get this tank looking ship-shape again for my Jack Dempsey. I want to know if i cut the leaves of the rhyzome will the leaves grow back. Or is it a case of cutting everything off and leaving the growing tip/end to travel its course along the wood again. I've been told once before the leaves would grow back - but a previous experiment last year failed and the rhyzome died off. If i lose the rhyzome so be it. I have others in my healthy tank i can take cuttings from.
Verminator

The canvas is what you make it...

Personally I'd treat the BBA with Excel or similar by adding the dose onto the BBA directly underwater. Get your tank reset up with good CO2 and the rest and the Excel should kill the BBA off.
Ed
Z

Use a brush and paint the excel onto the Anubias if they can be removed from the tank.
Regards,
Peter Kirwan
V

I tried a bleach solution in a 2L container. 1L bleach, 1L water so 50:50. I left the entire rhyzome completely submerged inside for roughly 2-3 minutes. Then rinsed off thoroughly and placed in a new algae free tank. So far the algae has gone red and nothing more. Its been 3 days since doing so and nothing has changed but the colour of the algae. The plant appears to be ok, some rhyzomes are showing new growth, others appear dorment.

I may try your idea zig. Looks like a trip to A5 Aquatics in Hinckley for me at the weekend to get some Excel, unfortunately its the nearest place i can obtain some Flourish Excel. Currently have loads of partially visible rhyzomes floating around in a furry mess so there easily removable to treat.

Also in the process of trying a complete 100% blackout in an old gravel tub (25kg tub). Will check plants in a few days see what happens. I'm basically using these rhyzomes as 'null & void'. There basically doomed to existance as far as i'm concerned. So i'm testing what can be done to the plants to kill the algae without harming them too much. I'm expecting casualties along the way

The canvas is what you make it...

the BBA turning red is a good sign... it is on the way out ... A 50:50 mix sounds a bit strong. I've used a small splash of bleach in about 1.5l to remove BBA from pipe work. But if it works and the plants survive go with it. just don't leave them in too long.

You need to fix the causes now! steady CO2 or excel use, more flow and nutrients (NKP and trace), and not have the lights on too long. and do a few water changes to get rid of as many algae spores as you can.

nano - 323 for 8
You must log in or register to reply here.
Similar threads