Mine has 12mm tubing as well. I bought it some time ago (second hand) and I'm not sure if I can take it apart. Do the top and bottom bits unclip or unscrew? I suppose it makes sense to take apart otherwise it would eventually get clogged up without any cleaning.

beeky said:
Mine has 12mm tubing as well. I bought it some time ago (second hand) and I'm not sure if I can take it apart. Do the top and bottom bits unclip or unscrew? I suppose it makes sense to take apart otherwise it would eventually get clogged up without any cleaning.
Click to expand...

If yours is a manufactured one then I'm sure it'll unscrew and you may be able to replace the 12mm hosetails with 16mm ones that'll simply screw in. Mine's a DIY one so I need to build a new one!
Ed 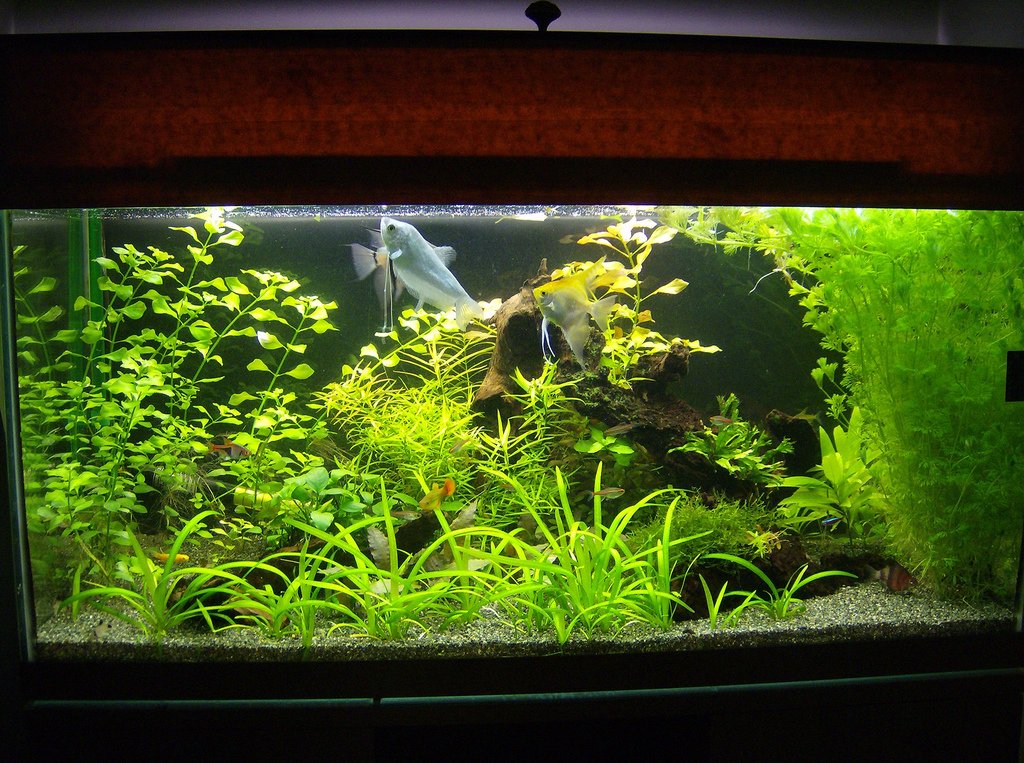 As you can see it's about time for it's first prune. The L.palustris seems to be bending towards the middle of the tank for some reason, whether this is because there's more light there or that they were bent when I planted them I don't know, although I would have expected them to straighten if was due to the latter.

My fluval 204 is being plumbed in tonight to up my flow.

Oh, and my female angel was cleaning the filter inlet tube in the back left corner last night! Probably a bit more private there....
A

Looking good, the sags are a bit to large IMOm maybe move them back a little and have a smaller leaf plant?
Aaron North
My Flickr Account | Equipment needed for setting up an FE | Algae & Nutrients

When I do my prune I'm going to take off the longest leaves and see if I can encourage it to grow shorter.

I added my Fluval 204 to the tank a couple of days ago and fitted the spray bar along the back. I got in a right old tangle with everything as the cupboards are fairly small (one each end) and all the tubes and wires were tangled up. Started 7ish expecting it to take a couple of hours with a water change as well and finally finished at 1 in the morning!

The flow was really strong but I opened up the holes in the spray bar with my drill so it's just as effective but less forceful. It's still a bit too strong for my liking though as the angels and gourami get blown towards the tank base when they swim to the front! I have to say though that the fish activity has gone up considerably. My corys are constantly playing near the front and I've actually seen my ottos chasing each other! I think that's the first time I've ever noticed them actually acknowledge one another! I'm going to try and get another spray bar to extend this one to cover the back wall, rather than just the right hand side. That should reduce the flow to a bit more of an acceptable level. The tank looked a bit of a mess initially as the flow stirred up quite a bit of muck but in the morning it looked the clearest it had ever been (apart from when I first filled it).

I need to get some decent intake and outlet pipes as I've had to cobble together the original fluval corrugated tubing (to bend over the back) with some eheim tubing I'd bought and then the spray bar didn't fit the eheim tubing either so I had to fashion various reducers/enlargers from other bits of tubing to get it all to fit. I can't fault the fluval filters, but the fittings are pants!

I haven't updated for a while and although the tank's not been neglected, the pruning and dosing haven't been quite what they should be and it's becoming a bit of a jungle....

First a pic of the L. arcuata which came out really well so I thought I'd share it! 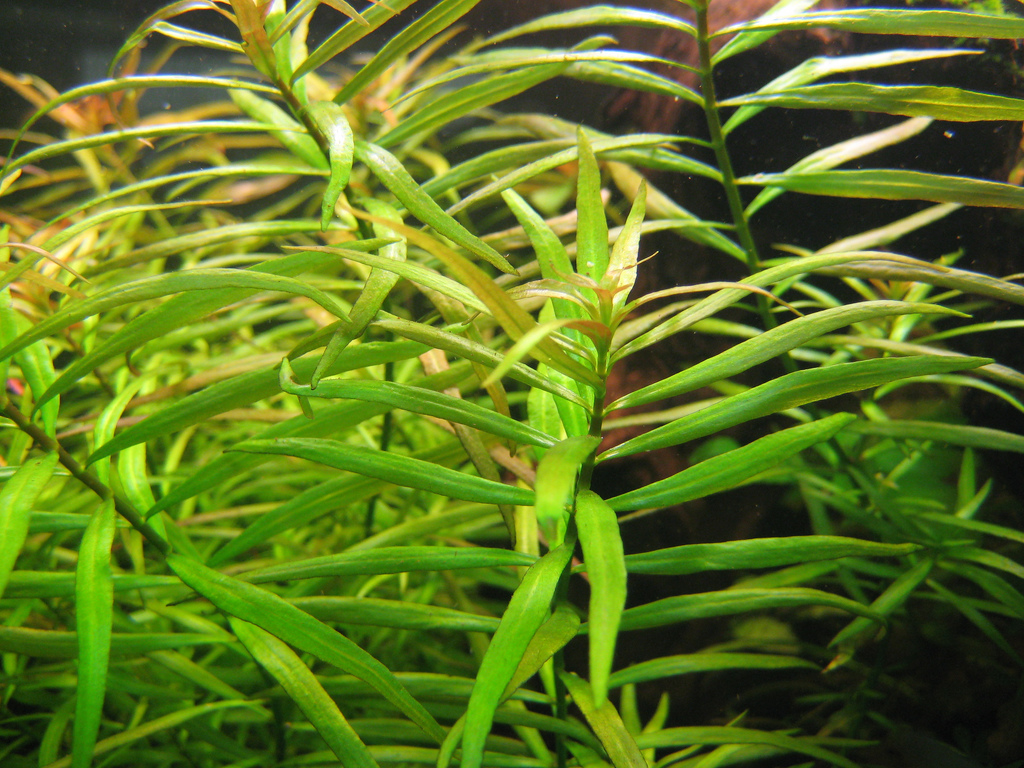 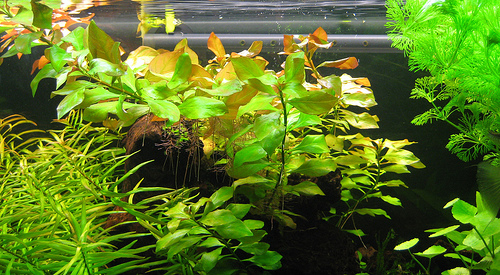 A view of the middle section: 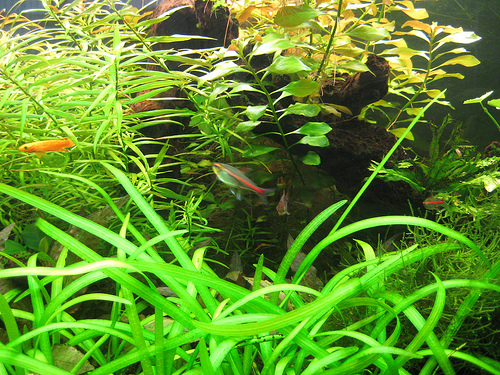 And finally a full tank shot:

You may have spotted a new plant I bought from the LFS; I think it's Cardamine lyrata though nothing was labelled in the holding tank. It's been in there two days and I've yet to plant it!

I've also ordered the new tropica Myriophyllum mezianum. I know George had problems with it, but I thought I'd try it out anyway. Not sure where to put it though?

The L. sessiflora is starting to become a bit of a pain. I need to chop it and spread it out a bit more as it was planted in bunches and has now got too big. Should I pull it completely? The Hygro at the back right is growing but quite slowly.

beeky said:
The L. sessiflora is starting to become a bit of a pain. I need to chop it and spread it out a bit more as it was planted in bunches and has now got too big. Should I pull it completely? The Hygro at the back right is growing but quite slowly.
Click to expand...

It's been just short of two months since I last posted, so I took a few photos last night to show some progress. Haven't had much time recently for maintenance and as such have had some GSA on the glass and BBA on the anubias. Also some lower leaves have fallen off the plants due to the light penetration not being ideal.

Thought it might be fun to do a before shot and the latest:

Here's hwo it started out: 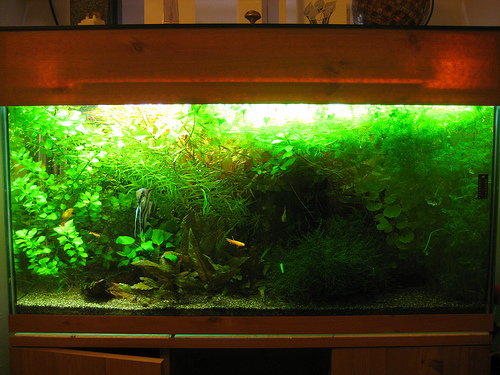 Here's a top view (they seem all the rage at the mo!) 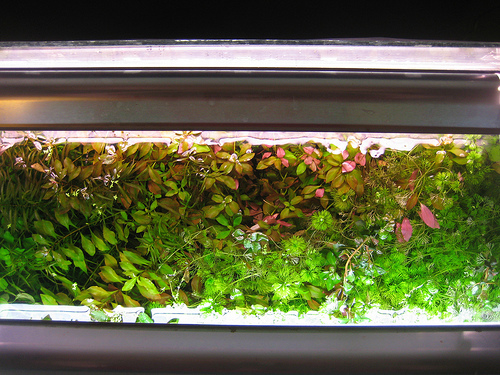 The plants are taking over!! 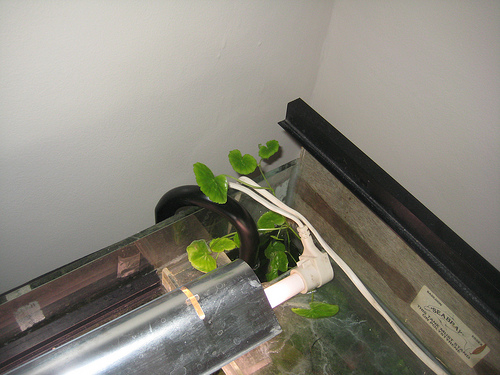 I actually did a major prune last night, so it's looking alot better now. Just haven't had time to take any pics yet.

Have had a few casualties over the last couple of months. My elderly female moonlight gourami passed away, had her for about 5 or 6 years. Also my male black ruby barb which was the last of the shoal. The others passed on about 18 months ago.

Hoping to post some new pics tonight. One other photo (not brilliant though) of one of my Epiplatys(Pseudepiplatys) annulatus.... 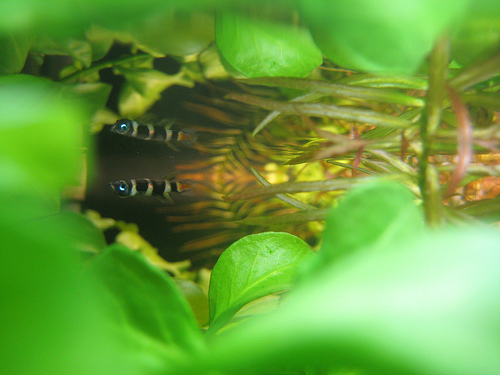 Oh...you may notice that the "dwarf" sag at the front has gone. I decided it was too much of a thug and the leaves were half way up the front, so I pulled it out. T'was a right mess with the tropica substrate clouding the water, it was soup for two days despite water changes. I'm still finding the odd runner popping up in the midground as well!

Just a couple of pics of what it looks like at the moment:

The plant in the front is something I picked up at Ikea at the weekend. It's got no roots so I don't know what it's going to do. I thought it looked interesting though. If anyone knows what it is then let me know!

and a close up of the left hand side: 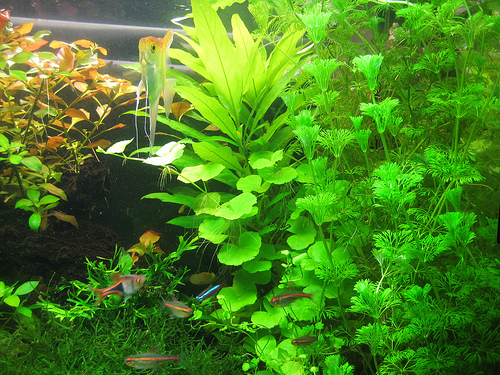 I thought I'd enter it in the AGA this year. Not that I think it's got any chance of doing anything, but just for a bit of fun and to boost the UK entries!
You must log in or register to reply here.
Similar threads