Best place to get starter cultures

Given the current restrictions on movement does anyone have any suggestions on the best places to source live food cultures, specifically grindal worms and daphnia? I've had a look on the forum but can't find anyone selling on here.

Thanks jaypeecee, I'll see what they have on offer.

If you have a garden all you need is a tub and clean water, put in some leaflitter and be a bit patient. Other flying insects mainly Notonecta glauca (Backswimmers?) visit local waters but also will find your tub. They are the postman picking up, carrying and dropping Daphnia eggs around all over the place. They will seed your tub, give it a few weeks and you'll have them for free.

Next to mosquito larvae as an extra of course, white, black and red..

Daphnia is pretty sensitive to water quality and high temperature, thus small volumes is a bit tricky for longer-term supply. My personal experience an 80-litre tub works already very stable and provides me all year round with Daphnia if the winter is soft and not freezing.

All it needs is dried leaf litter as food supply and now and then a top off during the dry summer days. For the rest, i do zip but do have Daphnia.
Cheers,
Marcel..
Tanks for watching.

I need to source a microworm culture too

Thanks zozo, I didn't realise they moved around in such away. I started culturing some green water and this year is the best I've ever managed, so I was hoping to get some daphnia. Normally I don't manage to get enough green water to make the tub viable but do get mosquito larvae as you say. I recently got a pair of P.taeniatus, which I've been looking for, for years and I want to get them to breed so need to condition them up.

ScareCrow said:
Normally I don't manage to get enough green water to make the tub viable
Click to expand...

You do not necessarily need green water, dried leaf litter and clear water do as good a job to feed Daphnia. My tub stands in the garden relatively shaded under a Hedera ivy and next to a Passiflora this drops dried leaves in the tub also the neighbours Chestnut tree helps. The only thing i do is take some leaves out if i feel its too much. It's never green water always clear.

As a kid, i used to go and catch them in the farmers' meadow. The big cattle drinking throughs are always littered with Dhapnia and the water is always crystal clear.

I guess the Green water Urban Myth is something developed from keeping daphnia in a small volume.. Then it's pretty normal that it booms and busts with the idea it's caused because the water is no longer green. But that isn't the case, in larger volumes also in clear water, i also notice booms and busts, But a 95% bust with the population at 200.000 is enough numbers and survival rate to still feed your fish once every few days and make a boom again.

What the exact cause is for the bust or 100% mortality i have no clue and only speculations. Since they are so darn sensitive it could be tiny swings in environmental parameters. Could be they boom each other to death with their own poop?
Cheers,
Marcel..
Tanks for watching.

I was planning to test that. I thought if I set up a small filter in one tub and not the other it may give some insight into whether the boom and bust scenario is waste related.

ScareCrow said:
I thought if I set up a small filter in one tub and not the other it may give some insight into whether the boom and bust scenario is waste related.
Click to expand...

If you add some <"dried grass"> to the cultures they last longer. I've never had any joy with cultures with any form of filter in them.

Thanks for your replies Dean and Darrel.

I've added some leaves as per your suggestion zozo. I don't have any grass (bit of an alpine plant fan so removed all the grass). So patiently waiting for some daphnia to appear now. I've tried hatching some brine shrimp I had but at over 10 years old I think they're past it as I'm not getting any to hatch.

ScareCrow said:
bit of an alpine plant fan...so removed all the grass
Click to expand...

Same with me, converted the spare car parking into a gravel garden and the <"front garden lawn into a pond">. I don't grow anything unusual anymore in terms of alpine plants, the last ones failed to survive the summer of 2018, when I was away for an extended time period. 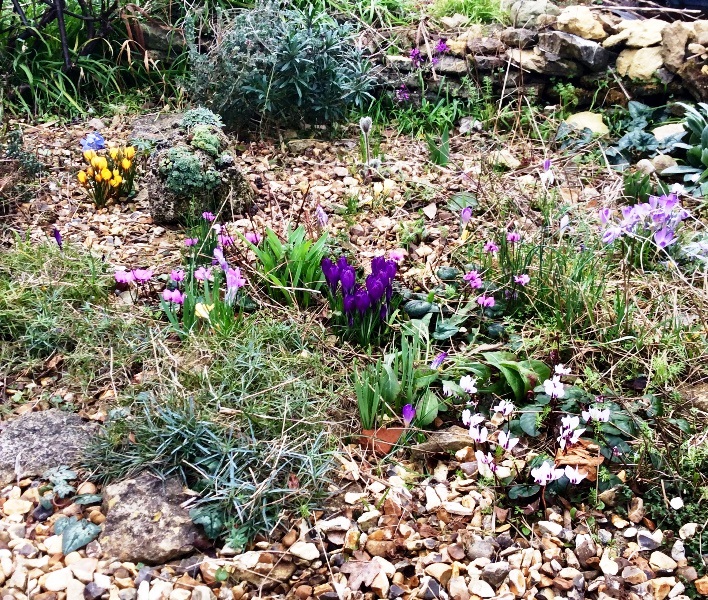 When I created it I had planned some more unusual plants but in the end I didn't have the time to tend it so stuck to easy alpines. It's now become a combination of alpines and larger perennials. If I'd known about Beth Chatto at the time, I could have said it was influenced by her but it's just evolved over time.

ScareCrow said:
If I'd known about Beth Chatto at the time, I could have said it was influenced by her but it's just evolved over time.
Click to expand...

I think she definitely <"showed the way forward"> with her "horses for courses" approach, grow plants that will survive in your garden <"without needing watering"> or you having to change the soil chemistry, drench them in pesticides etc.

She isn't always credited but she was an early environmentally aware gardener.

cheers Darrel
You must log in or register to reply here.
Similar threads