Best resources to learn from...

I really want to up my game this year and study everything I can about planted tanks. One thing in particular that gets me is plant names and pronunciation!

Can anyone recommend any good places to learn from? I watch a lot of youtube already mainly Goerge, Juris & MD. Any good books that people could recommend?

I haven't got one book and struggle with plants names also, however it hasn't stopped me.
I just use the internet and read lots of threads and ask questions
Books are dated as soon as they get to print!

Good research is one of the best methods. Make a good Mock Tank and use cheap sand or even clean garden soil for the substrate and start having fun.

andusbeckus
Go to as many LFS as you can and ask questions by doing that you will discover very quickly who will help you and who are only interested in your money. Locate the best Aquarium Club in your area they will be a very big help for you.

That's a difficult one since it's all in Latin with also fantasy parts.. A Latin family name, actually a surname that comes first and then a given name that can be anything such as the name from the discoverer with a Latin twist or the region its found or a specific characteristic in the plant.

Since Latin is an ancient and extinct language no longer used as a working language. Even way back in classical history (Roman times) there were no absolute rules and the Latin language was divided into an eastern and western variation. The commoners living in the west region spoke Roman Latin and in the elite in the east spoke Greek (Latin). Then the Latin language migrated further west, the more it got mingled with other languages and regionally changed and it travelled back and forth again. This still reflects in Latin today. The best example for us is probably the Aponogeton. Apon is actually a Celtic word for water or spring and Geiton is Greek for Neighbour. That makes it the plant family that Neighbours the water. Presumably a Latin name in Celtic/Greek language combination

Today it still is divided into Scientific Latin and Roman Catholic Church Latin (Maybe others i don't know about) and there is still some debate among scholars about how to pronounce it correctly.

One could debate which one is correct, i would say since Botany is science the S would be correct. But somebody educated in church Latin still would pronounce it with the tch. Thus both are correct and there is little to debate.

Then there are certain rules in Accentuation or Emphasis on vowels in between or behind certain consonants. For example when the A,E,I,O,U is short or long. For example i behind the b could sound different than the i behind the L. Or when 2 consonants meet like LL or RR. Or when 2 vowels meet like ii, according to my reference ii = Y as in the English I (do) and not ie-ai as often is pronounced. But can't say if my reference is absolutely correct after all it is still is an extinct language.

It is far too expanded to go into it with details here at the forum. But if you are interested there are sites on Latin grammar to find on the net explaining these rules. I experienced the pronunciation rules rather very much related to the Spanish and Italian grammar rules.
That could come in handy, to study this and hit 2 birds with 1 stone.

But in the end, it doesn't really matter that much how someone pronounces for example Cryptocoryne Wendtii. I guess i can say Wendt-I or Wendt ie-ai everybody probably knows which one is meant.
Last edited: 6 Jan 2020

There isn't really just one book that fits all, but rather several recommended texts...

Takashi Amano's trilogy of Nature Aquarium World books are priceless inspiration but becoming increasingly expensive. The highlights of all three can be found in his book Nature Aquarium : Complete Works, 1985-2009, which is still affordable.

My bible growing up was a book published in 1978 entitled The Complete Aquarium Encyclopaedia, edited by Dutchman Dr. J. D. Van Ramshorst, and I think it's still very relevant today.

For a comprehensive guide to biological, chemical, and ecological processes involved in running an aquarium Walstad's Ecology of the Planted Aquarium is unbeatable; it's not just for soil substrate enthusiasts, but rather should be compulsory reading for all aquarists...

Specifically for plants there's Aquarium Plants by Christel Kasselmann 2003, which is one of the most recommended, but again it's becoming seriously pricey. Good cheep alternatives are plant catalogues by the likes of Tropica and Dennerle. I could go on but I'll post a pic instead.

But ultimately, I think one of the best resources in the world is right here at your fingertips...UKAPS 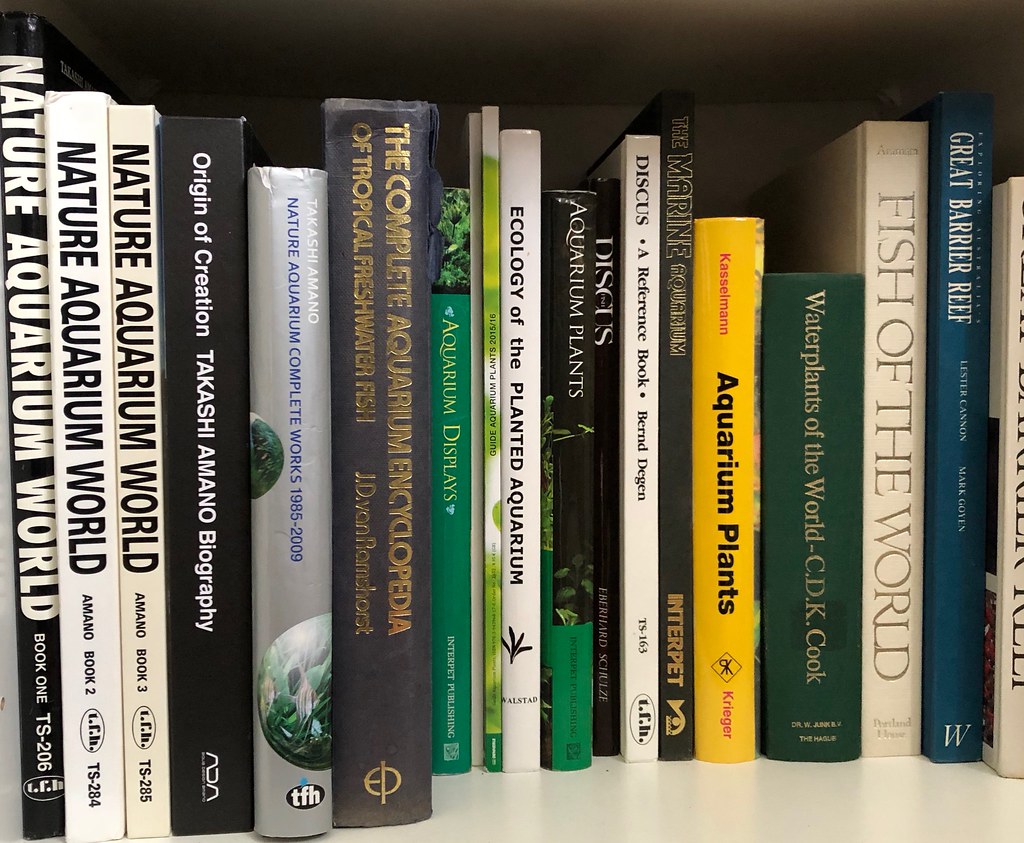 Tim Harrison said:
one of the best resources in the world is right here at your fingertips...UKAPS
Click to expand...

Every Friday ADA puts articles online from the latest Aqua Journal in English.

I would rather download the PDF’s like they use to have but will have to live with it.

Thanks everyone! I’ll definitely check everything out especially the Walsted book I almost got it but thought it was just geared towards one method.

andusbeckus said:
One thing in particular that gets me is plant names and pronunciation!
Click to expand...

The tutor at FSC Dale tells the students to pronounce the scientific names as if they were spells from Harry Potter, works a treat as long as you "swish and flick" at the same time.

You are meant to pronounce all the syllables, so Cryptocoryne wendtii is pronounced:

andusbeckus said:
especially the Walsted book I almost got it but thought it was just geared towards one method.
Click to expand...

It is well worth owning a copy, I still refer back to mine on a fairly regular basis.

Nobody has produced anything with the same scope and detail since, and my guess is that there won't ever be another book of the same type published in the future.

She has made a couple of revisions since it was originally published, <"mainly to do with water circulation and water changes">, this whole linked thread <"Walstad Revises"> is worth a read.

I'm pretty sure the D is silent.. And the Latin ii is really an intriguing issue. It seems about every country has its own interpretation of pronunciation.

Here the very same question asked in the USA and it happens to a botanical question as well.
https://www.grammarphobia.com/blog/2010/02/garden-variety-latin.html

And as said when i look up my reference in Dutch and i guess it is based upon 16th century Erasmus works. The ii at the end of the name should be pronounced as eye only. And if you ask an Italian scholar they most likely will say no it should be pronounced as EE only. And the Italians like to claim to be closest to the source, especially with the Vatican smack dab in the middle. Also with the letter C sometimes hard like a K or soft like an S, or as a Tch or a Ts? Or in between? As the famous Roman name "Cicero", mainly pronounced as See Say Roh and in other regions such as Italy, it's "Tsi Tse Roh". Same as the Italian Ciao - Tchiaow.

I guess it simply is totally lost and one should follow the rules that are valid in the country you live in.

Tim Harrison said:
Specifically for plants there's Aquarium Plants by Christel Kasselmann 2003, which is one of the most recommended, but again it's becoming seriously pricey.
Click to expand...

The English translation of her 2019 German version is now available for €69.95 here. Apparently she had to self publish the English version, which is a shame. If you would like a copy the process seems to be you email her your address, she sends you an invoice which you pay (PayPal or bank transfer) and then she sends the book. I'll post a few photos and my thoughts when my copy shows up so people can see what you get for your money.

andusbeckus said:
I really want to up my game this year and study everything I can about planted tanks.
Click to expand...

I see that you started this thread at the very beginning of the year. Are you still looking for suggestions and, if so, in which particular aspect of keeping planted tanks? There's a huge amount of reading material available. Some is very scientific, some far less so. Like others, I could produce a list but I certainly don't want to bombard you with stuff that would be of no interest to you.

JPC
You must log in or register to reply here.