Hi everone, after we (ukaps) were supplied with the plants for the FOF by plants alive we were unsure whether some of the "anubius" were aquatic or not. I don't have the knowlage to tell whether or not they are "nor did anyone else at the festival but George had his suspisions) so i desided to grow some emersed and some submersed.
After seeing Jeremy Gay's missus' (Sarah) paladarium i desided to go for it, i only had one tank that i could use without sacrificing my marrage so i used the PFK nano to use as an experiment and as somthing i've wanted for ages - a paladarium.
I have one "anubius" under the water and several above the water. I'm gonna see if the submersed one grows nearly as well as the emersed ones. The emersed ones have the rhizome under the water and the rest of the plant above the water.
The submersed one has the rhizome above the substrate and is tied to a rock.

I am running about 1wpg and adding Co2 via the tetra Co2 Depot system as you can see in the photo.
I am adding 1ml of TPN+ everyday.

Here are some photos. 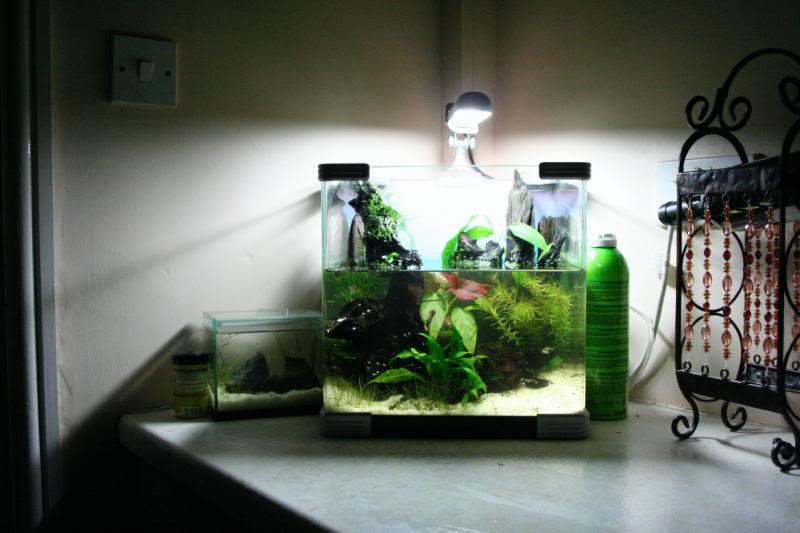 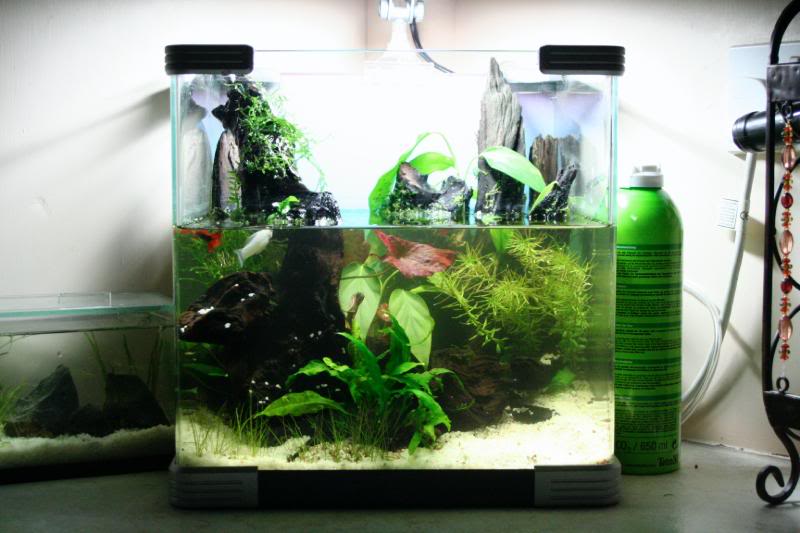 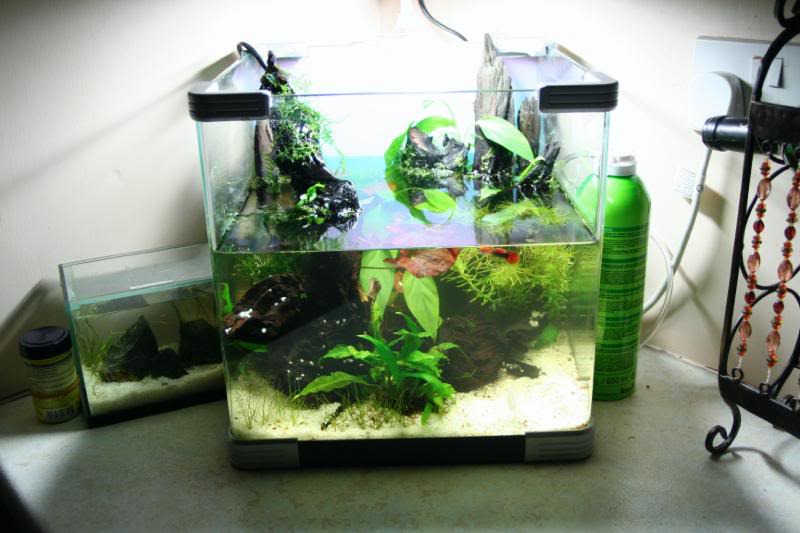 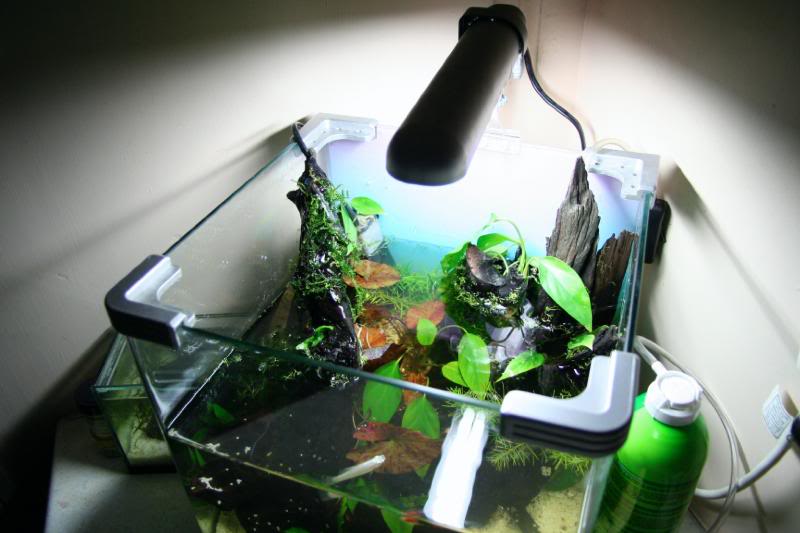 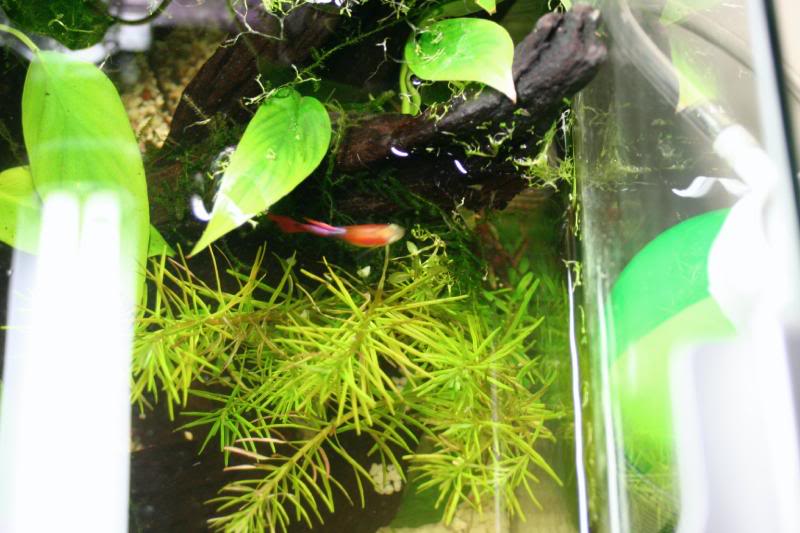 Let me know if you have any thoughts or advice.
Lookin forward to your thoughts.

I look forward to seeing how the 'anubias' turns out.

I've gotta say how much I love emergent plants/paludariums too. Proper nature.

I love it too!

Frolicsome_Flora said:
I love it too!

I might turn my 30cm cube into one too. Waterfall with moss and Anubias petite growing on rocks out of the water....mmmm

i think that paludariums are really amazing natural progression from 'jungle' or 'nature' tanks. What Id like to try, is growing some terrestrial tropical varieties in a display, as well as some nice aquatic species.

I want to build a tank thats something like 80cm deep or so, and make it taller than it is wide.. I think that stunning scapes could be created that way. A full Amazon biotope would be truly stunning if you could capture the full flora/fauna diversity.
Matt Holbrook-Bull
--------------------------
The only things that happen in an aquarium quickly.. are bad

The "anubius" that i was testing really does seem none aquatic (i hate it when George is right! lol) there is some growth but it seems to just melt in less than a day when ever it feels like it with no warning ie. it looks healthy one day then the next it's just melted. so i am still keeping it in the open top areas and not bothering with it submerged.

I have also aquired a fogger which is great. Check out these photos. 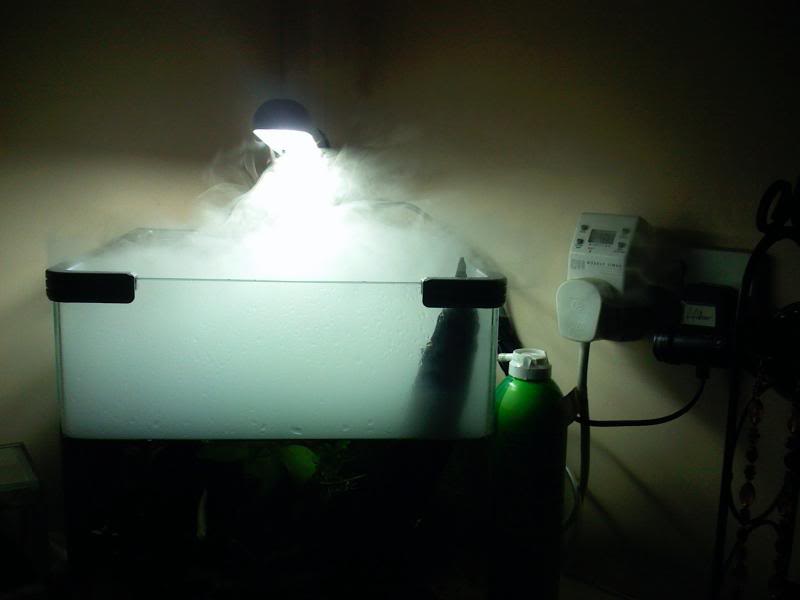 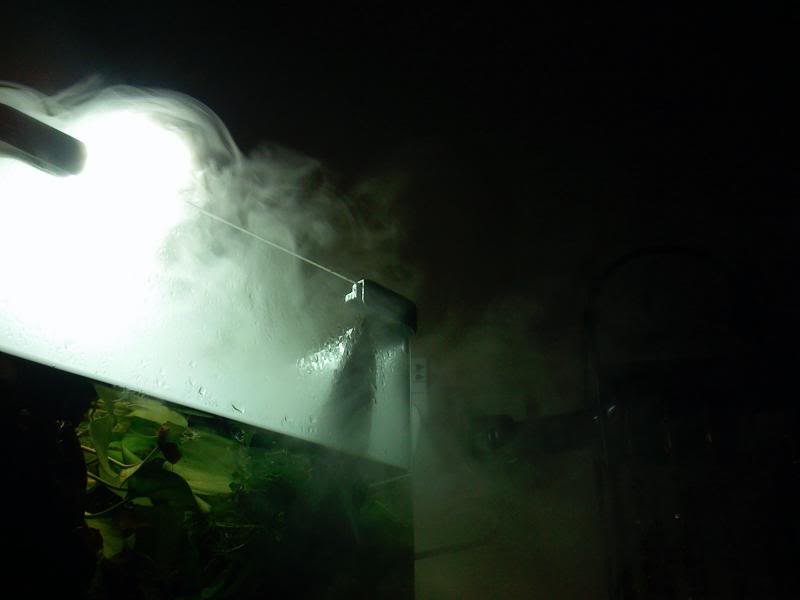 pretty cool IMO, what do you recon?

How is the light going to get through to the plants in the water?
Daniel

It's a good point, i have them on separate timers and only really use it for effect for an hour a day (or when people come round!)

Boys and our toys hey?

lol. er..why not just fill it up with water. it looks like a witch's cauldron.

why not just fill it up with water. it looks like a witch's cauldron
Click to expand...

Thats a fare point mate, the main reason was because it is somthing different but it also functions in keeping the moss and plants moist when i have it running, at the mo i don't run it all the time but i'm only messin about.
"just for giggles"

yeh I think so, I recon that the lower you place it in the water column the smaller the amount of mist that is produced. I'll have a go, it is normally about 2 inches high, the ones in the photo were for "effect".

Hey Big Danne,
Cool idea with the fog but I think the photo let us down a bit. I'm sure it's better looking in real life mate. Can you redo it with a flash aimed from the bottom where the water is so we see the greenery with fog on top? Your camera was deceived by the bright light on top so the bottom is underexposed.

Will do sir!
These were taken on my iPhone, i'll bring out big burther tonight (Eos 350D) thanks for the advise.

Just wanted to slip that one in and see if anyone noticed?

here's an update on the fogger, i've lowered it in the water column thus producing less fog. What do you think.
Before the fog. 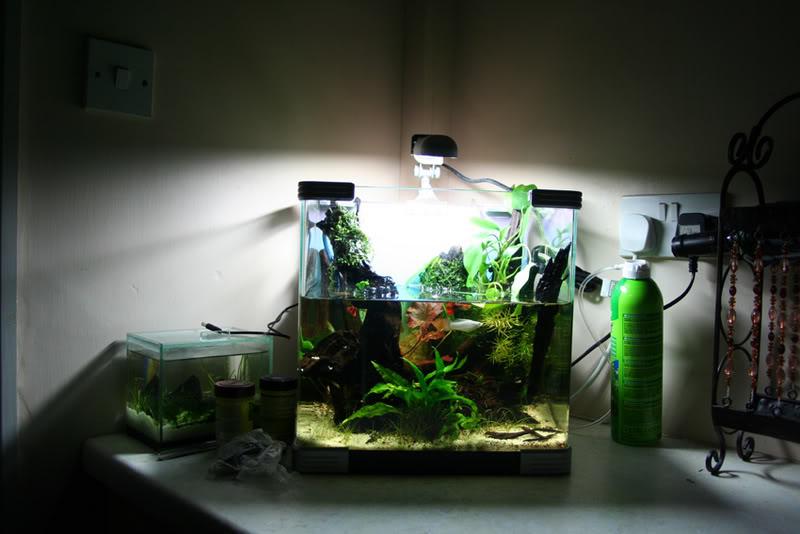 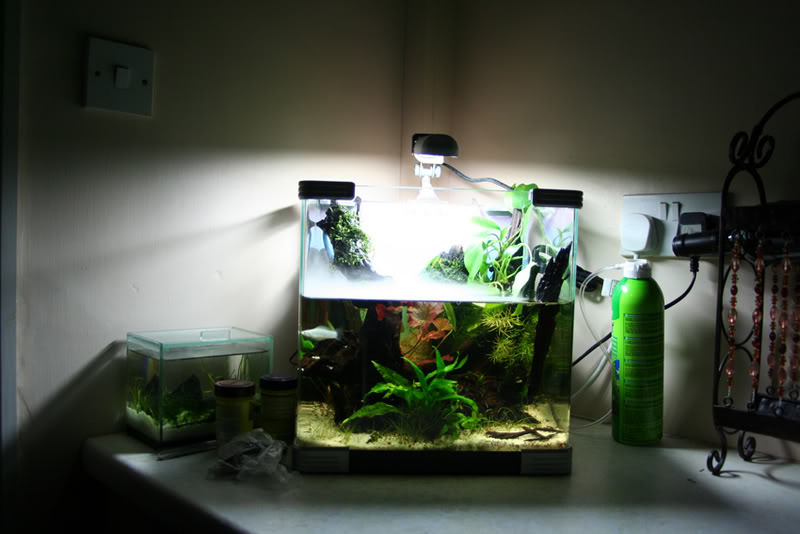 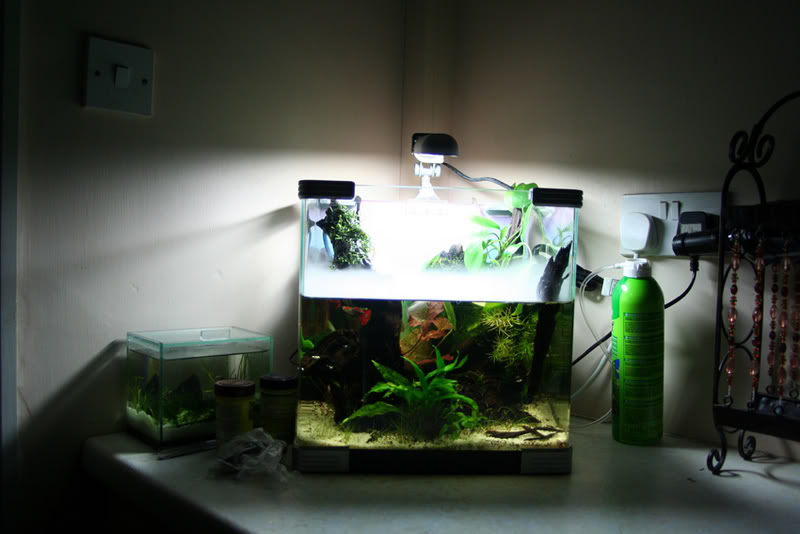 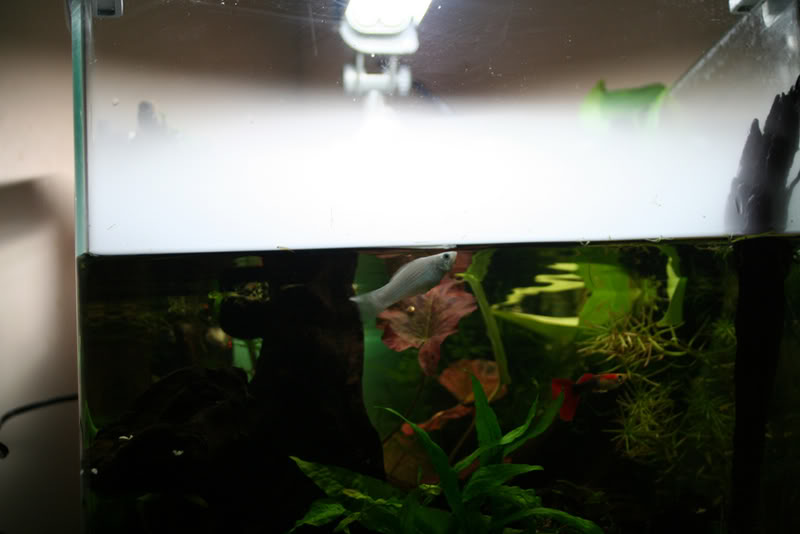 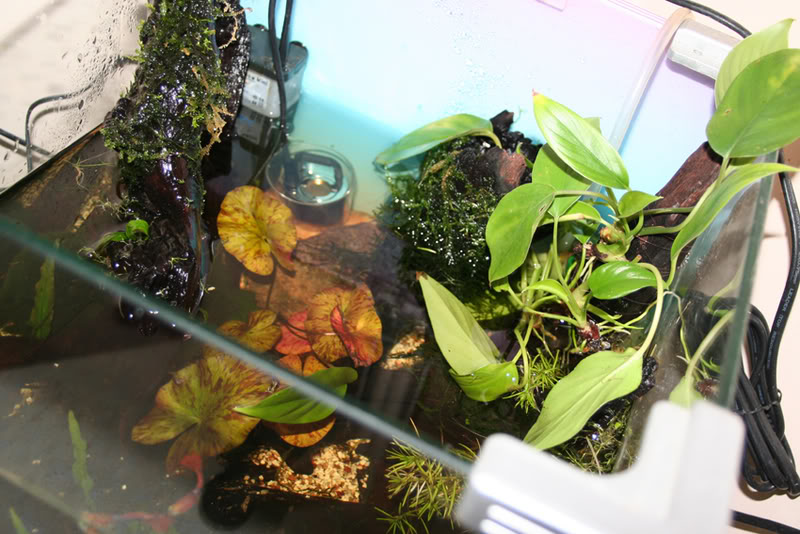 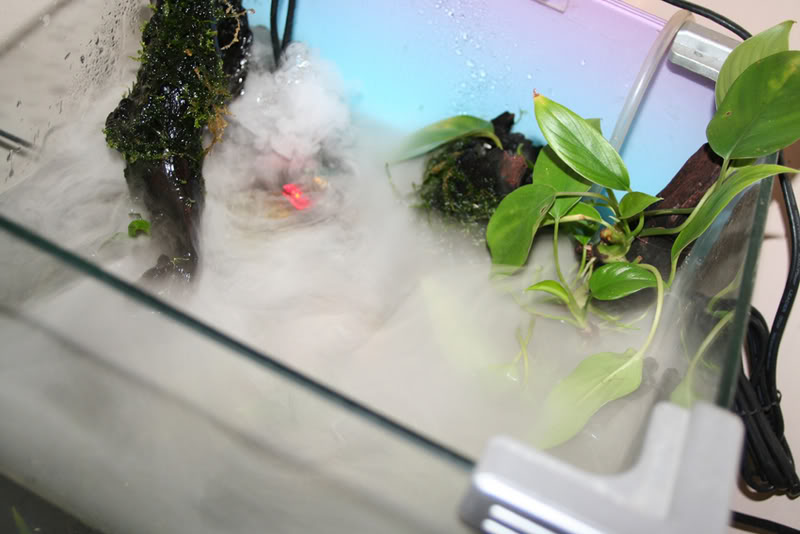 quite a lot of photos but hey, everyone loves a photo.

NOW were talkin'! I expect the creature from the black lagoon to come crawling outta there any time now...