Anybody know of a great bio media to put in my fluval 305.

Yes. Pot scrubbers, chopped up. If that's not stylish enough then activated carbon is always an excellent choice.

ceg4048 said:
Yes. Pot scrubbers, chopped up. If that's not stylish enough then activated carbon is always an excellent choice.


Surely pot scrubbers chopped or not chopped have nowhere near the bio load capacity volume wise as say Eheim's Ehfissubstrat pro or Seachem's Matrix ? Interested to hear more as just I've taken some pot scrubbers out as thought I would upgrade them ...now where did I throw them ! Never thought of chopping them up though, guess that will also improve things..

Do people realize that plants are bio filters? That they do more than any bio-media can possibly dream of doing?

The other key advantage of scrubbies is that they don't block flow like the fancy sintered glass media do. So you get much better throughput due to less hydrodynamic drag. Are people aware of this? Do they realize that in a CO2 enriched tank, flow is king?

Oh, I forgot, here's another advantage; scrubbies cost £6 per six-pack at Tesco. Even cheaper if bought in bulk. 2 liters of Ehfissubstrat pro cost about £25.

ceg4048 said:
Well, I mean how much bio load capacity do you need?
Click to expand...


I guess this opens up another debate and depends on so many factors. If I was investing in one of the more upmarket canister brands such as Fluval or Eheim, I would go for one of their respected biomedia products, be it a bit more costly. Having said this, I just bought a second FX 5 on Gumtree over the week end, when I opened it up... what did I find... three layers of scrubbies !

Hi all,
Like Clive says it doesn't really matter. I like Siporax and Eheim "coco-pops", but I'm not going to spend a load of money on them, it really doesn't make any difference. Normally I use ceramic rings, floating cell media or alfagrog, because they are cheap and do the job.

Biological filtration is all about oxygen. There is a more complete explanation here: <Biological Media....Please help? | UK Aquatic Plant Society>.

Would my fluval 305 be ok for my roma 240. I do also have 2x hydor koralia 1600 for extea flow and movement. Taking on board what peeps are saying about types of bio media just want to know what media to put in each compartment of each chamber, 6 in total 3 layers of 2. Did just use pond foams before, different grades into shape of chambers and stack 1 on top of other then ceramic rings on top layer. Just like to know opinions please whats best for planted tank.

Well, I mean, how many ways are there to say the same thing?
Put some of these in chamber 1. You probably still have some of these from when you were a kid. Your bacteria won't care. 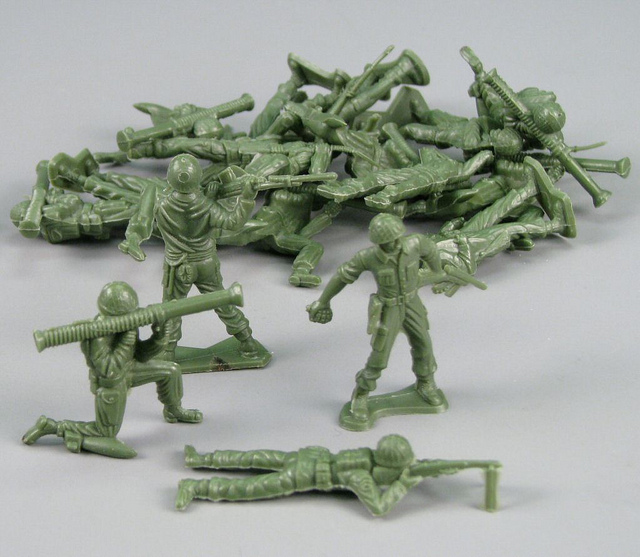 If you have a specific need, such as removing leeching tannins from newly acquired wood, or if the water is otherwise discolored, you may want to think about putting some activated carbon or Purigen in the next chamber.

Manufactures have the audacity to sell plastic "bio-balls" as some magic media and by doing so they insult everyone's intelligence - and those stupid balls are actually less effective than toy soldiers. The soldiers have more surface area - look at all the creases.

Or, just continue to use whatever you used before. I really wouldn't even bother to do any grading. It just doesn't matter people. Stop paying ridiculous amounts of money for plastic.. If you love ceramic then go to a Greek wedding and pick up all the pieces of smashed dishes after it's all over and put it in the canister.

lol, at least it's a green army ! Real pity about the one dude that was taken out by a python, guess he never even made the front line..
A

So superfish bio balls are not that good what Richard from aqua essentials suggested.
A

Also whats the best stuff to use to catch suspened particals and polishing water.

Filter floss... purigen, clear max etc. and hagen now do liquid product called Clear fast which I used at aqua telford on their tanks and after half an hour the tanks were polished amazingly.
1400 litre chocolate lake
Lava Negro
A 'little' box of chocolates
A Chocolate Puddle
Mini Nano
My 5ft jungle
Diy inline reactor for FX5

Andy Dunning said:
So superfish bio balls are not that good what Richard from aqua essentials suggested.
Click to expand...

No, that's not true at all. Bio-balls work about as well as toy soldiers. Scrubbies or any foam material will trap suspended debris as well. CO2 injected tanks need to have large frequent water changes and the water changes makes life easier for fish, plants and filters. My point is how much money do you like to spend?

When the tank is first setup there is a lot of debris and turbidity. These chemical media products remove the excess debris by adhesion or by flocculation but after a few months, habitual water changes will keep the water crystal clear, so you don't need to spend a lot of money afterwards. None of those fancy name brand media do anything more than what scrubbies or plastic bits do, despite all the techno-babble. Their only advantage over common household materials is that they have a higher surface area, which is not really needed because the plants are intercepting the toxic nitrogen compounds, and so essentially short circuits the process to some extent. Nitrifying bacteria steal oxygen from the water in order to perform their function, so what you should be thinking about is not how much bacteria you can house, but how effectively can you reduce the need for high bacterial populations.

So informative, love it guys !!

Clive us Newbies are so glad your active again, enlightening us with these old gems

IFC Aquarium Fertilizer Calculator
Journal - Olympus 500L is Calling, Journal - Pot Scape 50l
"God is in the details." -Mies van der Rohe : "Do or do not, there is no try."-Yoda

For the record I am posting a link below on filtration media. It came to me as a revelation and I learn quite a lot. It is quite interesting how we have been brainwashed for decades by these manufacturers when simple common sense usually suffice. I urge everyone that still is arguing about filter media to read this thoroughly. I was shocked but now enlightened.

The rest of the website is also very informative and I would recommend anyone to read it.

Hanuman said:
I urge everyone that still is arguing about filter media to read this thoroughly. I was shocked but now enlightened.
Click to expand...

He talks a lot of sense (and quotes our very own @MirandaB ). We have a few threads <"along the same lines">, about < "Biocensosis buckets"> and <"Biohome"> etc.

It took me a while to read through some of the articles from aquariumscience.org, but I am wondering if you guys agree with most or everything that he writes?
The filter media article is interesting but I must say I balk at some of the statements he makes in the other articles. For example that PH, KH and GH means virtually nothing to fish. Along with a lot of other very bold statements.

Its easy to be swayed by people who make definite statements and have so clear cut solutions for things, not just in aquarium keeping but general life. However I often find that those who express their doubts, recognizes how much it is that we do not know for sure, often are more close to the actual truth than those who claim to have it all figured out.

I tried reading through more of the articles but if his writings are incorrect it would waste a lot of time that I could spend otherwise.

Curious to hear your thoughts on this source and his claims.

Hufsa said:
For example that PH, KH and GH means virtually nothing to fish.
Click to expand...

I haven't read the article and ill tell you from experience he's about 95% right. I'm not saying go nuts and put Africans in 5.5ph but you will do fine with keeping fish outside recommended parameters. Consistency is more important than the numbers. As long as everything stays around the same all the time you would be surprised at what fish can thrive in.

Hufsa said:
The filter media article is interesting but I must say I balk at some of the statements he makes in the other articles. For example that PH, KH and GH means virtually nothing to fish. Along with a lot of other very bold statements.
Click to expand...

I'd tend to agree, some of the articles are really good, some are definitely not so good and the ones on planted tanks are particularly poor.

I haven't read all the articles, but I think he keeps Rift Lake Cichlids, at relatively high densities, in non-planted tanks and that has coloured what he has written.

cheers Darrel
You must log in or register to reply here.
Similar threads