I've been running this non CO2 tank for 18 months or so (maybe more, maybe less). It's been moderately successful (no major plant health issues) but I'm kinda bored with it. What I'd like to do is convert it to a paludarium for a few Marbled Newts and keeping some suitable fish alongside. My plan so far is as follows:

• Drain water to 8-10" depth
• Build an 'island' for the newts and some emersed plantage, the bulk of which will sit to the left (see graphic below).
• Bin one of the two canister filters currently used, sticking with just an Eheim 4+ 350 Pro due to reduced water content.
• Have a tube system from the outflow draped over the back of the landscape providing water flow (hopefully a trickle) over the scape and into the body of water. I might adapt one of those irrigation systems you find in garden centres.
• Remove the tank's bracing and rim (it's a Fluval Roma 240). I figure it won't need near as much structural strength as current.
• Use Terracotta Class B Engineering brick as a base then use Lava Rock or similar for the main bulk of the scape. I'll then top-off with Seiryu stone as I have a fair amount of it spare. Any gaps, I'll fill in with Aquasoil.
• Simultaneously, I intend to add either a black foam sheet to the background OR a thin sheet of Coco mat - I think the latter might look better but perhaps might rot?...

Any flaws in my plan?

I'm aware that newts require lower temps (50f-75f) so some of the residents will have to go, that's a given. My major concern is the build. I don't want to completely tear down the tank but instead add to it at a moderate pace in order to build the land feature. What would be the best material to build bulk before adding the lava rock? How would I avoid producing uncleanable holes/areas where detritus would collect? 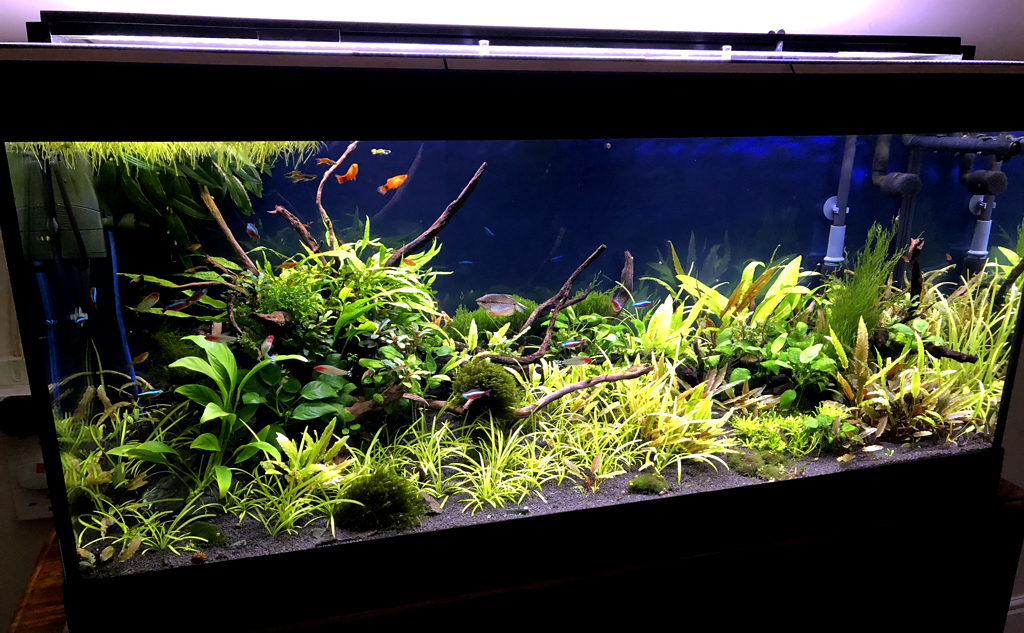 It'll be tricky doing it all in situ. The common way to build your landmass would be using polystyrene sheets, layered, and they carved into the shape you want. You could then overlay a cosmetic layer of lavarock and glue in place. You could do that in one or more pieces, all outside the tank.

You'd then need to fit them in place, ideally with no water in the tank so you could stick.them down. Otherise you'll need some rocksnheavy to hold it down.

You could run a spray bar along the back and hide it from view with wood and plants.

Thanks for your input. I've updated the first post.

Having mulled this over some more, I realise that a tear-down is of course the 'proper' way to do it but I have a sizeable, established Cherry and Amano population and I have nowhere to re-house them temporarily. I do enjoy an engineering challenge so I'm up for it. I'll probably do a journal here when I start. For the laughs if nothing else!
55 litre Low tech Dennerle Scaper's Project

Something on pilers would seem like the easiest way to do it in situ and maximise fish water volume. Maybe egg crate grid stood on acrylic rod pilers. Lift the wood and attached plants out. Put the grid structure in and put the wood back in on top.

PBM3000 said:
in order to build the land feature
Click to expand...

I did a similar thing for Fire Bellied Toads. I just lowered the water depth and siliconed some glass shelving as a platform form for the 'land'. Planted up with moss and grew some aquatic plants as emergents and had the rest planted as an aquarium. I left the tank bracing in place.

Wounder how the newts and shrimps will get on.

Marbled Newts can be beautiful. All the best with your project.

PBM3000 said:
I have a sizeable, established Cherry and Amano population and I have nowhere to re-house them temporarily.
Click to expand...

Saving them for newt hunting