After trying to keep my Buce alive in my 60x 40x 45x I thought a change may be in order and have swapped the survivors over to a TMC Signature 60x45x30cm and tried my hand a stone based aquascape. The Buce seem relieved*. With a nod to Dave Chow's aquascape 'Great Wall of China' in Green Aqua (a nod from a great distance) I used a large stone. I thought of using Seiryu Stone, however, decided to go for some Psammíti** knocking around my garden. I added some chips off the old block around the base. I have moved the colony of yellow shrimp to the tank (originally bought from @Steve Buce) and they seem to be doing ok***.

Dotted with smaller Crypts (an ode to George Farmer) and with some terrestrial moss on the rock - pinching the idea from @Matt @ ScapeEasy.

As always any comments or advice would be very welcome. 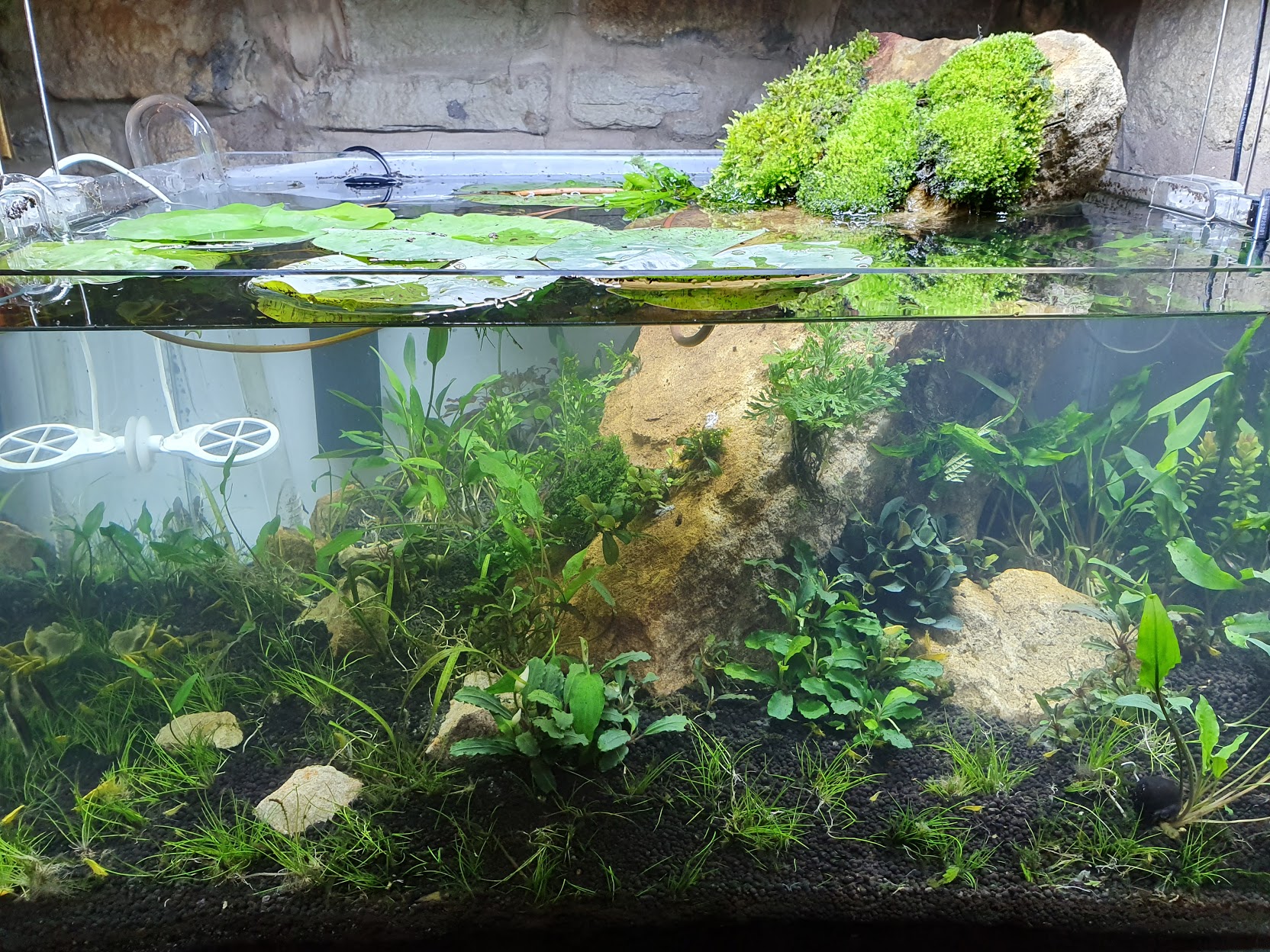 * NB the ones that look full of health have just been bought from Aquarium Gardens. These are the ones that look rather surprised (not in a good way).
** A large piece of Psammíti sounds like a rock that that can be sold for large amounts of money. In the hope that this does take off I have renamed sandstone grit as Psammíti (or used the Greek name for a similar type of rock) in the hope that this takes off and that bloody irritating pile of rocks in the bottom of my garden suddenly transformed into the latest aquascaping fashion.
*** On a side note when Buce were described as 'shrimp safe' they really didn't mean a colony of Steve's - amazing colors, robust, breed like crazy and enjoy the odd buce plant when not fed on a daily basis.

More photos below. Any advice of comments welcome. This is my third attempt. The large stone cannot be moved atm ...the rest can be. 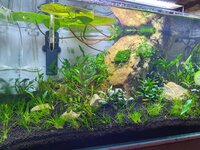 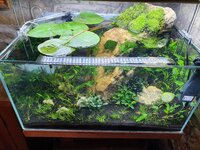 Some of my learning points from this tank (so far):

The base is John Innes No 3 with a soil retainer covered with repurposed aqua- soil from the old tank. I bought Osmocote fertilizer to rejuvenate the soil, however, as this didn't arrive on time for the rescape it will be added in ice cubes during the next major water change. The best deal on e-bay seems to be: Plant Food Feed Fertilizer Scotts Osmocote Plant Food 750G Controlled Release

I like capping off repurposed soil with new aquasoil (it gives the illusion of looking something like the scapes I see on youtube). For this I used 3L of Tropica at @ £16 from my local pets at home - this was an impulse buy after an awful day at work when it was clear I needed to start scaping or start climbing up the walls. The learning point from this is that I should have bought ProdiBio 9L AquaGrowth Aquarium Soil + FREE Bacter Soil Kit when at Aquarium Gardens for £32.

I used a small sack of pebbles to raise the height at the back of the scape. As a dry scape this worked well with a good 2cm of soil on top of my pebbles. I didn't, however, account for gravity and the action of shrimps. After the green netting started showing I realised that this wouldn't work and removed he pebbles. I have seen the Green Aqua Videos where they use soil retainers (sections from plastic sheets), however, understand that they don't work particularly well. The sad sack of pebbles was removed.

The 3rd pic and right hand side looks good, the left is just a bit bare, how about another piece of that expensive aquascaping rock you've unearthed?

2x3 times the size of the stone on the right and set back a bit on the left?

@Kalum ...thanks for the advice. I will take a look at the mound of priceless "aquascaping" rock and find a something suitable. Something two thirds of the size of the piece on the right.

As for the Buce, the one I bought from Aquarium Gardens is flowering. I am suspect that it's a desperate attempt to reproduce after realising that it was bought by me rather than a sheer delight...

I have added a stone as suggested by @Kalum ...thanks, I think it looks more balanced but am not sure of I have correctly followed the advice. Any additional opinions, suggestions or advice would be welcome!

Looks good to me

The tank seems to be developing well. It seems to be in balance with a thriving colony of @Steve Buce's Yellow Shrimp. I have just added five ember tetras and they seem fine. The Buce are surviving and growing slowly. Please ignore the pipework in the background - it will be cleaned this week! Any suggestions for planting or development are more than welcome. 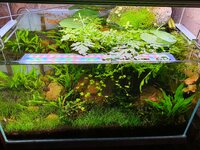 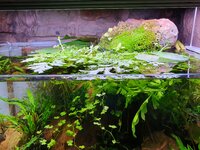 Onoma1 said:
The tank seems to be developing well.
Click to expand...

Looks good. I really like your mossy emersed stones. It is a Birch (Betula) seedling growing in the moss, the other one looks like it might be a Willowherb (Epilobium).

Looks great below and above the waterline.
.
Aquazeitgeist. YouTube
A Brief and Incomplete History of Aquascaping. Soil Substrate Planted Tank - A How to Guide
Schism Reimagined. NatureScape. Return of the Shallow. Windswept Eternity, Primordial. The Dark Side or What Lurks Beneath

What are the name's of the buces that you purchased?

@Tankless - from memory these are:

Looks really good. I like your bare walls too.