Hi all,
A couple of <"very interesting articles"> have come my way that suggests that Bladderworts (Utricularia spp.) are getting a lot of their food from algae that they've captured.

Most Utricularia spp. are a bit temperamental in the aquarium, but <"I have a lot of Utricularia gibba"> and mainly algae free tanks, so putting 2 + 2 together this could be a <"perfect business opportunity">.

The <"BotanyOne article"> also suggests that the Bladderwort might grew its own algae, but I'm not going to let that get in my way. If Donald Trump can build a wall, I can sell Utricularia gibba.

The farming element is down to where the algae that Utricularia eats comes from. Sirová and colleagues refer back to earlier work by Jennifer Richards. She notes, among other things: “Free‐floating plants generally have at least three whorls of mature leaves before they become completely covered with algae and appear to be senescent.” if Utricularia encourages the growth of algae outside the traps, then it has a supply of food to eat close to the traps when they fire.
Click to expand...

Sirová’s team also shows that the traps host fungi, bacteria and protozoa. The combination of guests in the trap work on degrading the plant material and then each other into a form that Utricularia can digest. The authors compare the digestive teamwork to the kind of microbial community you could find in a ruminant. They go on to say that the traps with their microbial communities “…represent unique biodiversity and activity hotspots within the nutrient-poor, dystrophic environments, in which they grow…”
Click to expand...

Interesting idea, you never know it could catch on
.
Aquazeitgeist. YouTube
A Brief and Incomplete History of Aquascaping. Soil Substrate Planted Tank - A How to Guide
Schism Reimagined. NatureScape. Return of the Shallow. Windswept Eternity, Primordial. The Dark Side or What Lurks Beneath

That would make them rather Omnivorous.. Interesting!?...
Cheers,
Marcel..
Tanks for watching.

Wow, that is very interesting. A plant that almost seems to practice agriculture, thanks for sharing!

That is extremely interesting,often wondered how my Vulgaris survives in the tanks although I do feed some live foods from the tubs outside so it may get a bit from that.

I have one of the 'minor' ones. It comes and goes in my tanks. Looks like a thread algae but with bladders. Where it came from I do not know. Very interesting post.

Oldguy said:
Looks like a thread algae but with bladders. Where it came from I do not know.
Click to expand...

I had a lovely feathery one about ten years ago that grew like mad for a while then just as quickly declined, you can see at the top of the tank. 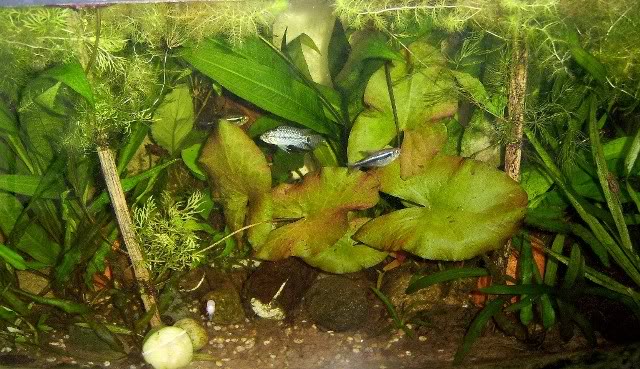 dw1305 said:
I had a lovely feathery one about ten years ago that grew like mad for a while then just as quickly declined
Click to expand...

Was that the U. stellaris? I tried this one 2 times by now and i never was very succesfull.. I asked the person i bought it from and he said he grew it succesfully for years with extra dosage of phospor.. That i never tried, didn't come to that, for now i can't get it any longer. Anyway U, stellaris is an extremely beautifull Utricularia.
Cheers,
Marcel..
Tanks for watching.

zozo said:
Was that the U. stellaris?
Click to expand...

It wasn't U. stellaris (it was just "feathery", it didn't have "starry" flotation bladders), but I'm not sure what it was. Near to "Utricularia australis" would be my guess.

I was in a LFS nr. Bristol (Parkers at Iron Acton) about ten years ago and it was in the bunched stems section with Elodea etc. so I paid pennies for five stems.

I've never seen it for sale again and it was only when I wanted bit for something else that I found it had all gone. I had it with a lot of Cabomba caroliniana and Ceratophyllum demersum so I hadn't notice that it had dwindled away.

It's a darn pitty these plants are so sensitive to keep in community tanks.. It is still on my wishlist to ever do a small species only paludarium dedicated to Utricularias.

Till now i spend quite some cash and tried U. Stellaris, U. Volubilis and U. Graminifolia as aqautics and the U. Gran Sabana as terrestrial. But each time i failed. I think i need a ro installation or a very very big rain drum that never runs dry and a very strick controlled invironment.
Cheers,
Marcel..
Tanks for watching.

Thanks Darrel. Looked on the link, spot on. It flowered, with bladderwort type flowers, but on short storks and it did need the support of other plants. I like this little plant and have left the tank it was in (now a right mess) hoping it will reappear.

Always worth looking for hitch-hikers. Lots of lovely plants in this world and so few commercially available. I always look at the liverworts that are on potted house and garden plants.
Love ukaps always lots of information and people willing to share their knowledge and experiences.

Not pennies but if you are intersted keep track of this.
http://shop.carnivoria.eu/aquatic-bladderworts

I believe this shop is located at Czech Republic and afiliated with Institute of Botany in Trebon.. and they also sell rare aqautic carnivores via this website.

zozo said:
It's a darn pitty these plants are so sensitive to keep in community tanks.
Click to expand...

I've read a few web pages that suggest introducing them to a mature "tank" with lots of other plants including floating ones.

Have a look at <"Fool-proof Alvodranda ....."> and <"Carnivorous Plant Nursery Azolla">.

dw1305 said:
I've read a few web pages that suggest introducing them to a mature "tank" with lots of other plants including floating ones.
Click to expand...

Till now i did each time, but they just very sowly go smaller and smaller and finaly dissapear.. That mature tank is rather an illusive and relative statement. Obviously despite maturity i still was missing something or have something from the tap i shouldn't have. I'm realy at a mystery here and don't know... Than i asked the guy that sold me the stellaris what his ssecret is, he said extra phospor.. ?? But unfortunately till now i wasn't able to try again. Tho gut feeling says, can't be only extra phospor.. Personaly i think my tap waters EC and nitrogen is to high.

Every carnivour i had till this day, died when i used my tap water.. The only one i still have is the Nepenthes that i strickly feed with distilled water..
Cheers,
Marcel..
Tanks for watching.

Could this suggests low nutrient water is the key, but I have found U vulgaris in drains in Kent in arable areas. Further out in Romney Marsh found drains choked with Azolla and zero submerged vegetation. May be different species have very different requirements cf. duckweeds.

You're right, their carnivorous habit allows them to thrive where there are low levels of available dissolved nutrients, it's the same with other carnivorous plants, some grow in bogs, some in poor soil, some are epiphytes, they need their 'bugs' to compensate for the lack of conventional plant nutrients. It lets them thrive where most plants struggle.
But they can't necessarily cope with higher levels than they would encounter in the wild, varying between species a bit.

If they are not such a huge pest, one could use them in a bag as a natural 'UV' filter perhaps...
From Sydney , Australia

Oldguy said:
Could this suggests low nutrient water is the key, but I have found U vulgaris in drains in Kent in arable areas.
Click to expand...

You often get a relic flora in drains on what have been grazing marshes, but it is doomed eventually with agricultural intensification. It is the same on the rhynes on the Somerset levels, all the interesting plants are now confined to the larger nature reserves, and even there there are water quality issues.

If you used Azolla as your floater you would need to thin it out pretty regularly, it forms an even better "black-out" curtain than Duckweed. I've now got square metres of it <"growing in trays in the glasshouse">.

dw1305 said:
If you used Azolla as your floater
Click to expand...

As a kid fell in love with 'fairy moss' but as a man fell out of love. I have found it to form rafts to the horizon a foot or more thick, new plants growing on old, and completely dominating water courses and killing aquatic plant diversity. Sheep graziers have lost livestock to this plant growing in drains as the sheep think it is land, drowned bloated sheep are a bit niffy. Apparently now controlled by the tiny 2mm long North American weevil Stenopelmus rufinasus ( now considered a UK native). Check your growing containers.
You must log in or register to reply here.
Share:
Facebook Twitter Reddit Pinterest Tumblr WhatsApp Email Share Link