Obviously if you're happy with the snails, there's no problem. I suppose it is my ex Army control freaky thing taking over, I can't stand things out of order. Strange considering we are supposed to be trying to recreate a bit of mother nature for us to look at. Trouble is we are fighting a losing battle, just when the aquascape reaches its optimum condition in terms of appearance and growth, we are happy with it and then suddenly it goes past the point of being perfect and we have to start meddling with it again, trimming, pruning, rescaping etc. Still it beats playing golf

My Scape "Fallen Wilderness" got to the stage where it was just "Wilderness" so I got my control freak head on, opened a can of whoopass and now it is just "Fallen" but is starting to show promise again on its own, but no one would recognise it from when it was first set up in Summer this year.

I'll post a picture or two straight after the New Year, speaking of which, A Happy New Year to everyone at UKAPS. May your fish be Merry and Bright and may all your plants be healthy and errrrrrrrrrr what rhymes with Bright? :?

plants be healthy and right

Doh!! Why didn't I think of that!!
Fallen wilderness
Lanzarote Lava Scape
A Shady Glen
A simple Plain
Trigon 190 Rescapes

Trouble is we are fighting a losing battle, just when the aquascape reaches its optimum condition in terms of appearance and growth, we are happy with it and then suddenly it goes past the point of being perfect and we have to start meddling with it again, trimming, pruning, rescaping etc. Still it beats playing golf
Click to expand...

Now, playing golf is good aswell unless of course you've never tried it!

Fish and golf seems a bit like enjoying motor racing and quoting Monty Pithon (tends to go hand in hand for some strange reason that I've never understood). Is that just me? I'd be interested to find out what other aquarists enjoy doing as a pastime/hoby.
Kind regards

Fish - Sit in front of the tank and relax.
Golf - Hit the ball 300 yards, take a leisurely walk to where it landed whilst enjoying the fresh air and sights of nature.

Seems to me they are pretty similar in many ways. Both relaxing, both calm and both addictive.

I have to say I sold my golf clubs a few months back and spent it on some fish. lol

I tried nine holes once. Got overtaken by everyone else who started hours after me. I spent most of my time looking for my balls.

Then one of my balls landed in a pond so I went to look for it and guess what?

SuperColey1 said:
You of course mean a reason to go for a walk that you would otherwise not have gone on
Click to expand...

SuperColey1 said:
You of course mean a reason to go for a swim that you would otherwise not have gone on

Nope! I built a pond in my garden, another reason not to play golf

So here we have it. Since the last update a Koralia1 has replaced the Maxijet MP400. I have also altered the hood anticipating that the LEDs are going to be much more light even though they will be less wattage!!! The Hood is now a Luminaire.

I have gone open topped!!! For now it is hanging by chain and S hooks until I figure out a prettier way.

I have cut 2 inches from the bottom all the way around, Cut the holes for the fans that are to go on each end to cool the LEDs. Fixed the fans in. Then I have altered the positions of the filter pipes as there will be no cutouts for them to slot into. the current cutouts will be filled in and the Fablon'd. Then an acrylic sheet will be fixed into the bottom to protect it all from the water. There is a lot of wiring going to be in there. lol
The mounting board 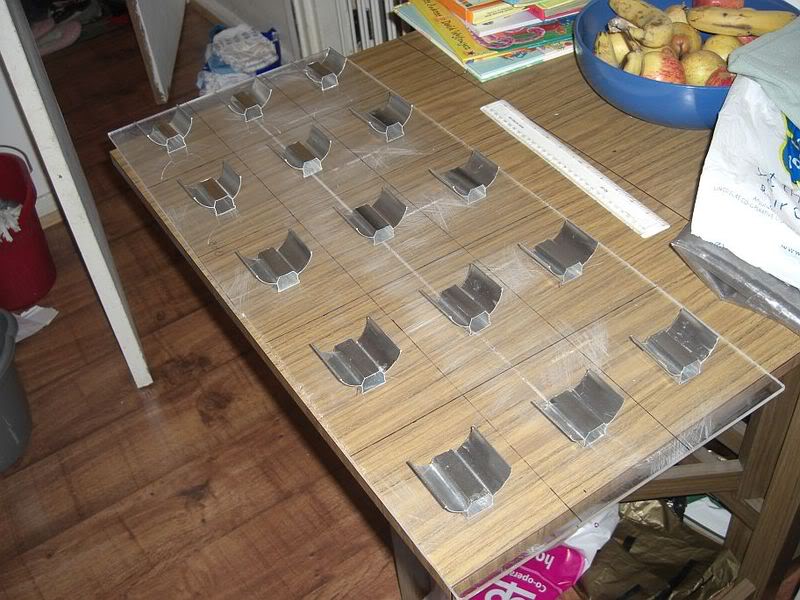 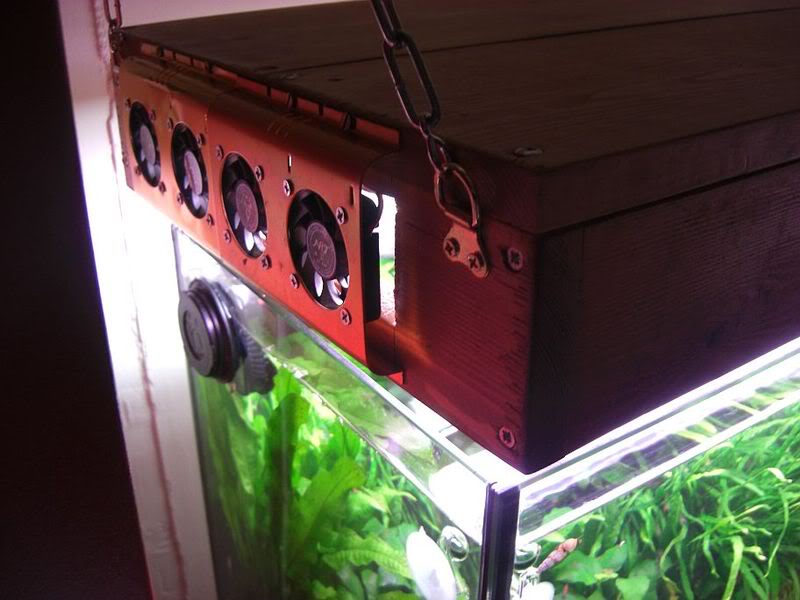 The whole setup with chains and hooks: 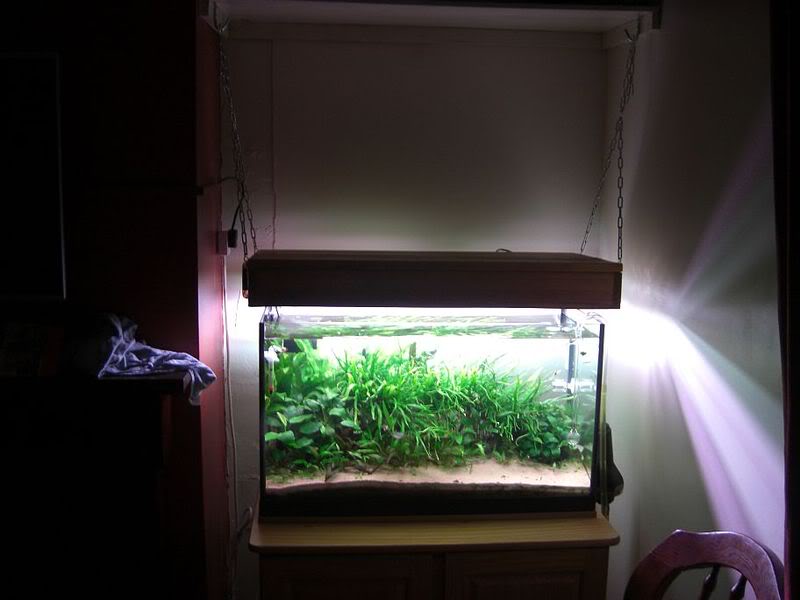 I found it really hard to get good pictures now that a lot of light from the gap between light and tank interferes with my compact where before the hood blocked it!!!. So here are the best I could manage

These first pictures just show the scape from the front: 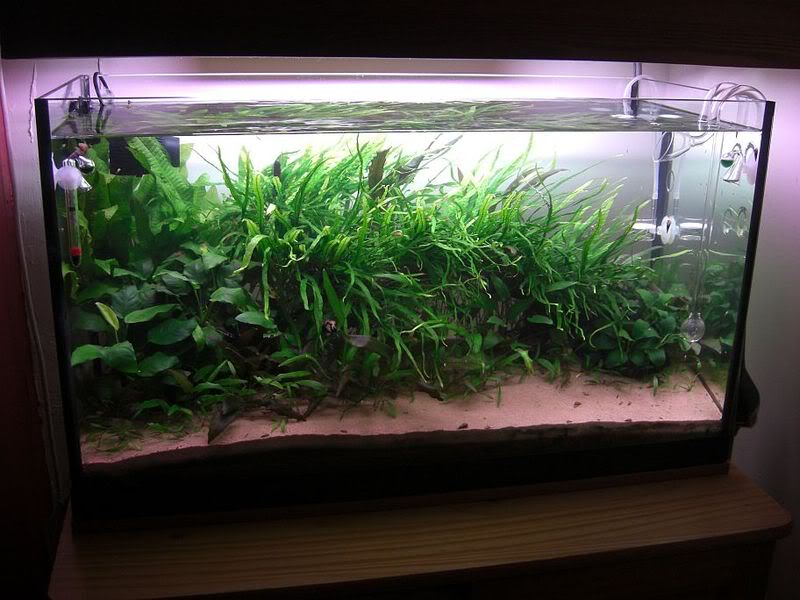 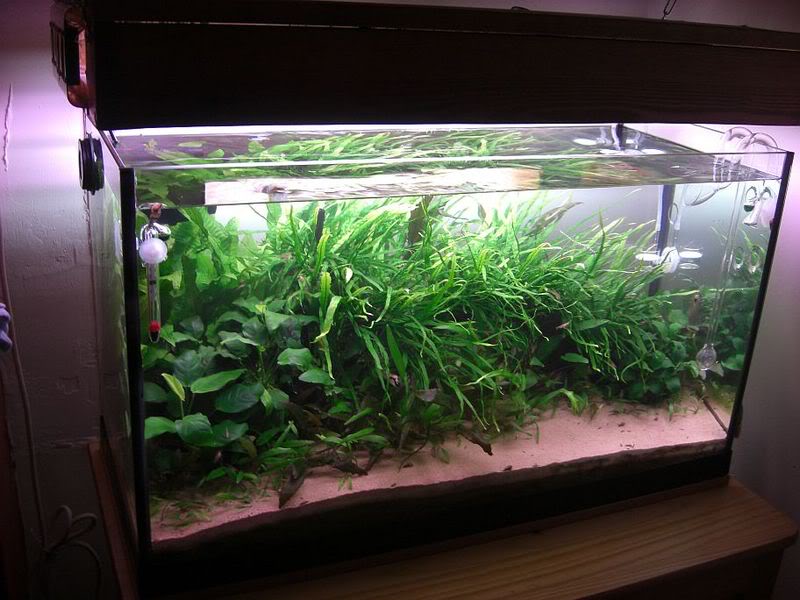 Is it just me or does an open top tank look a lot bigger? I look at mine now and even though I can see more of the glass heightwise it gives the appearance of being longer!!! Strange but cool

A sneaky peak into the tank with the Luminaire raised 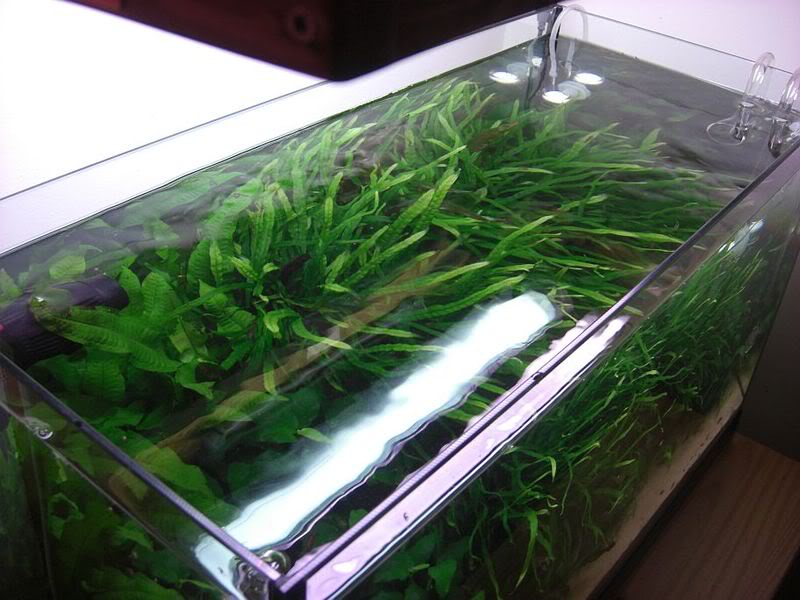 And for those who want to see 'low light' pearling here it is. Remember this tank has 0.9WPG for most of the day with 30ppm pressurised and full EI dosing. There is an extra 3 hour spell in the middle where it comes up to 1.4WPG. this is about 2 hours into that central spell so 5 hours into the photoperiod.

So under 1.4WPG. A 'low light' plant. Pearling like mad!!! Pearls even more later on in the photoperiod: 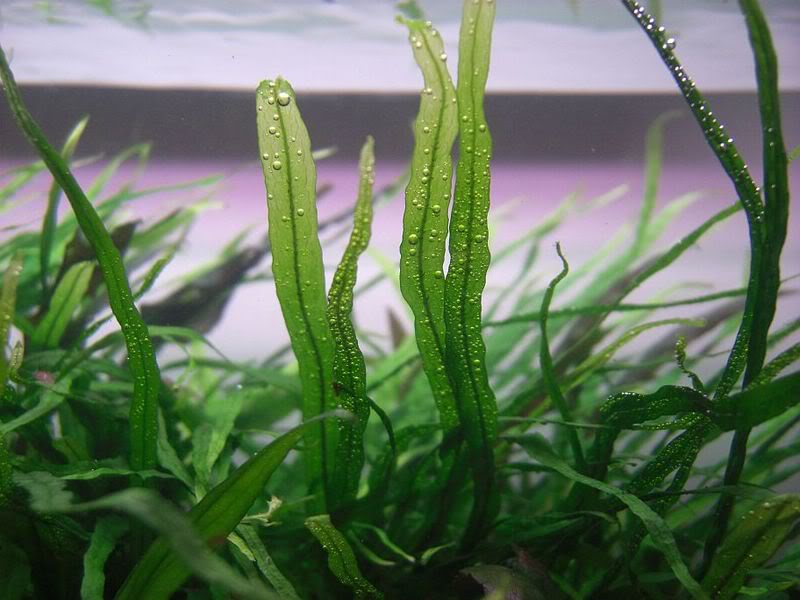 the next update will hopefully have 42W of 5500K LED lighting above it.

They definately need these fans. The journal that was on another forum where someone made one of these up he used aluminium bar and the heat from the LEDs meant he had to 'slot' the attachment at one end because they were warping the bar when they were on!!! These get really hot not like a normal 3 or 5mm LED!!!

ok, that'll teach me not to re-read the backlog, just thought you were going for the <1w LEDs that most lightbulb replacements are made from!

Egmel said:
You shouldn't need the fans for the LED's that's the main reason they use so much less power, they don't waste it as heat.
Click to expand...

Whilst they use less power, watt for watt, LED's waste more heat than T5.
T5 waste approx 60% of their energy as heat, whereas LED's waste closer to 85%
My Flickr

no idea on the spec sheet. Bought these cheap from China. They are Luxeon III 5500K 3W ones though so the Luxeon site may have the datasheets on there.

The fans are no problem really. All 8 are running from a single 12V adaptor and create a silent but noticeable breeze. These fans are really pretty quiet whilst creating a breeze that was making my hands cold (as in out in icy weather with no gloves on) whilst I was testing them!!!

AC
formerly known as "Supercoley1"
A

Light dispersal certainley looks better, when i lift my lid up about 5" it is a surprising difference, the colours of the tank are much better, so i might go open topped sometime in te future
Aaron North
My Flickr Account | Equipment needed for setting up an FE | Algae & Nutrients

Egmel said:
You shouldn't need the fans for the LED's that's the main reason they use so much less power, they don't waste it as heat.
Click to expand...

Whilst they use less power, watt for watt, LED's waste more heat than T5.
T5 waste approx 60% of their energy as heat, whereas LED's waste closer to 85%
Click to expand...

I know it differs depending on the size of led but I thought they were more efficient than that (up to 45% in the labs), it's often difficult to find up to date specs though as people are more interested in lumens/watt.

TBH most of my experience with semiconductors is useless, a mixture of basic elec eng degree course and tit-bits I hear over a drink with friends who are doing their PhDs with them, neither of which actually applies to real world applications!

I am experimenting with a carpet under low light now

Will update with details at a later date.