First the obligatory safety warning (sorry), this tutorial uses a cylinder pressurised to around 50psi or 3.5 bar. Gas under pressure can be dangerous if not treated with respect. If something goes wrong thatâ€™s your fault, not mine. I accept NO responsibility for loss, damage or injury incurred if you use this guide. But be sensible and you shouldnâ€™t have too many problems

Right, some of you will have seen my pressurised CO2 tutorial based on a fire extinguisher http://ukaps.org/forum/viewtopic.php?f=34&t=266. Well having upped the lighting over my work tank I wanted to add some pressurised CO2, after having realised that yeast CO2 is woefully inadequate and too messy even for my 60lt tank.

I set myself the task of seeing just how cheaply I could put together a pressurised CO2 system and so Iâ€™ve come up with the below. Its not perfect and has some quite large â€˜consâ€™ but that should hopefully be balanced by some equally large â€˜prosâ€™ and give people on a relatively tight budget the opportunity to try pressurised CO2. I dare say few would go back to yeast I also wanted to provide a kit that anyone could get, so all the parts Iâ€™ve used I purchased online.

Right first off, the cylinder. This system is based on the disposable 600g CO2 cylinders used for welding. A very cheap place is machine mart, but I dare say you might be able to find cheaper. 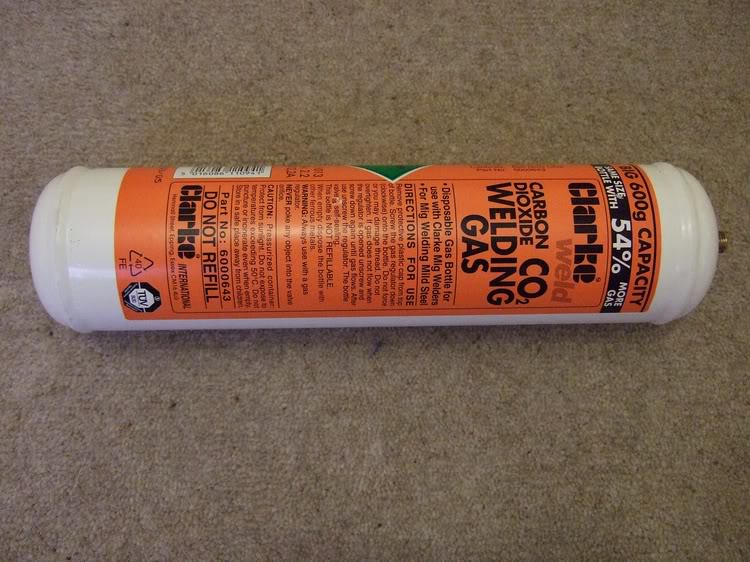 The cylinder is sold with a green cap over the tread, which once removed shows the 1/8 BSPT (British Standard Pipe Thread) thread. 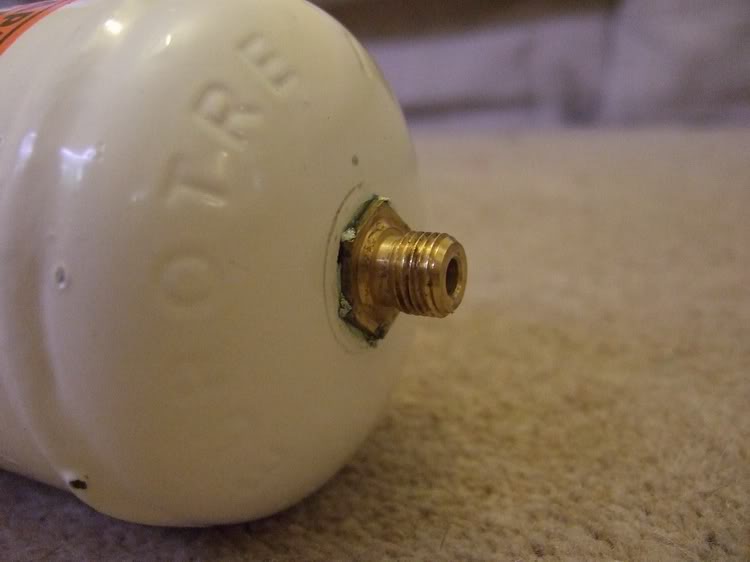 As this is a cheap system I opted for the cheapest regulator I could find, with is a welding regulator with no gauges. 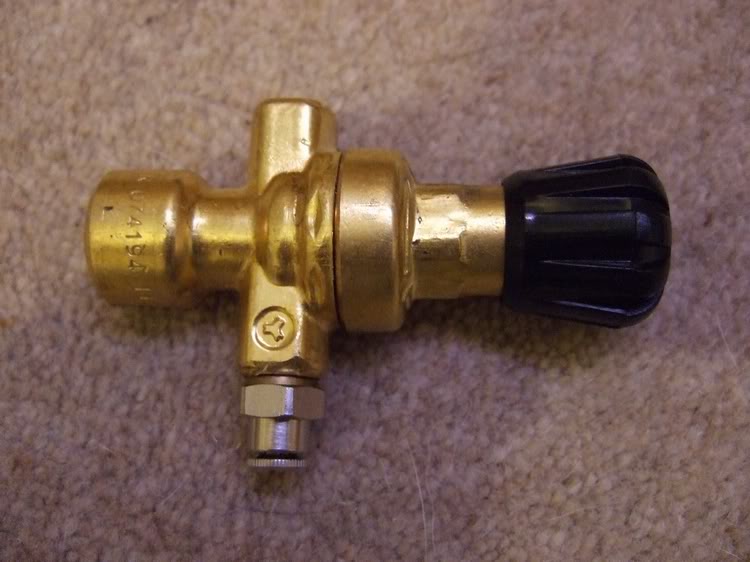 This regulator is supplied with a 4mm OD (outside diameter) push fit connector, which you have to unscrew. 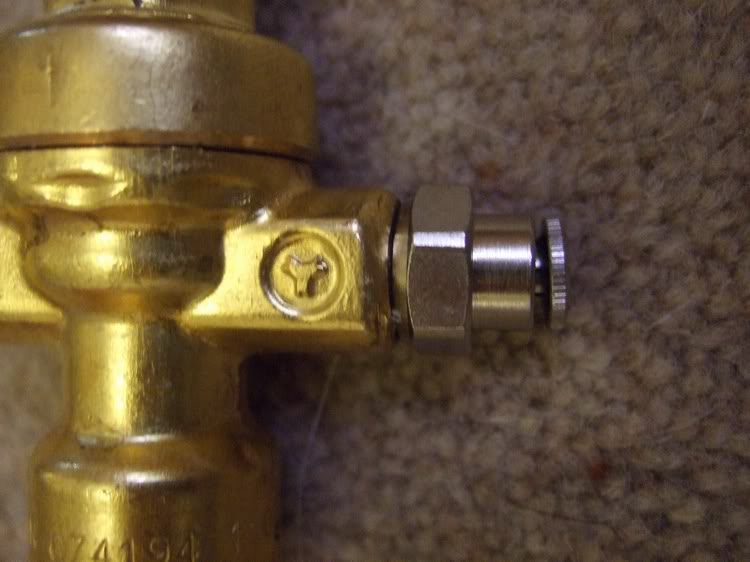 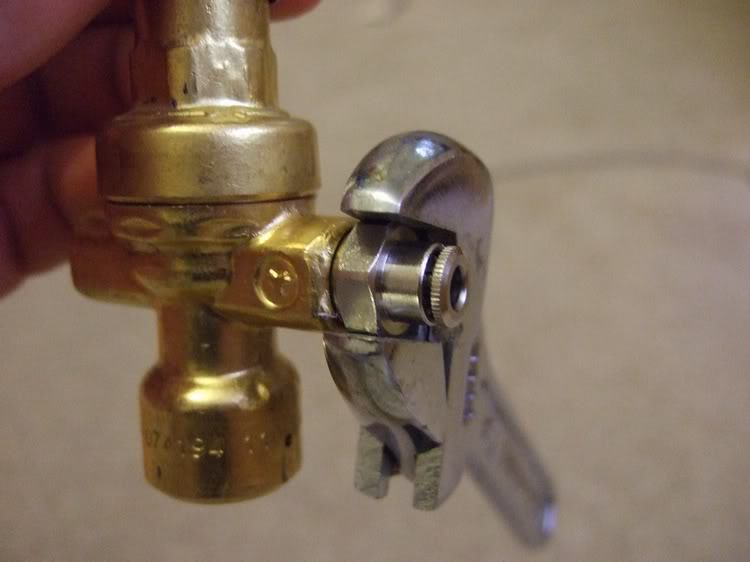 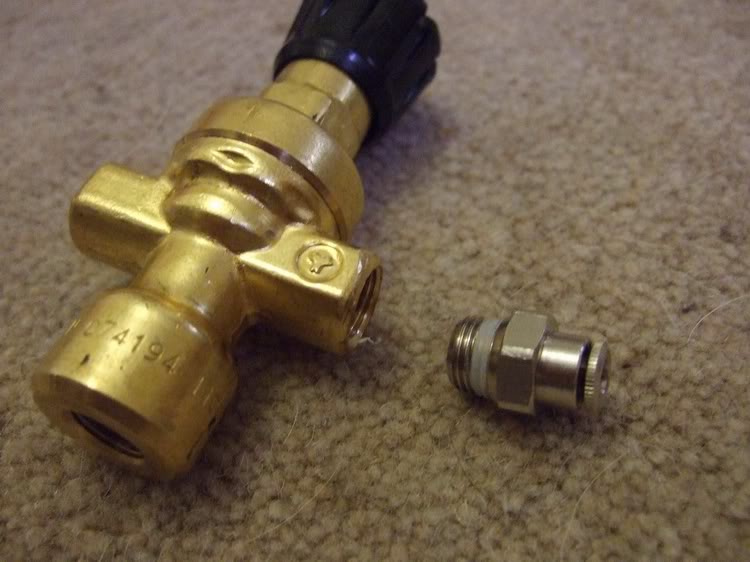 The tricky part of this system was finding a way of converting the 4mm OD push fit adaptor on the regulator to receive 6mm OD CO2 tubing. Then I started to look for pneumatic adaptors and found this one, a 6mm Push in M Stud connector 1/8 BSPT. The â€˜1/8 BSPTâ€™ part is the important bit as it determines is the size of the thread with the â€˜6mmâ€™ part the size of the â€˜push fitâ€™ connector. 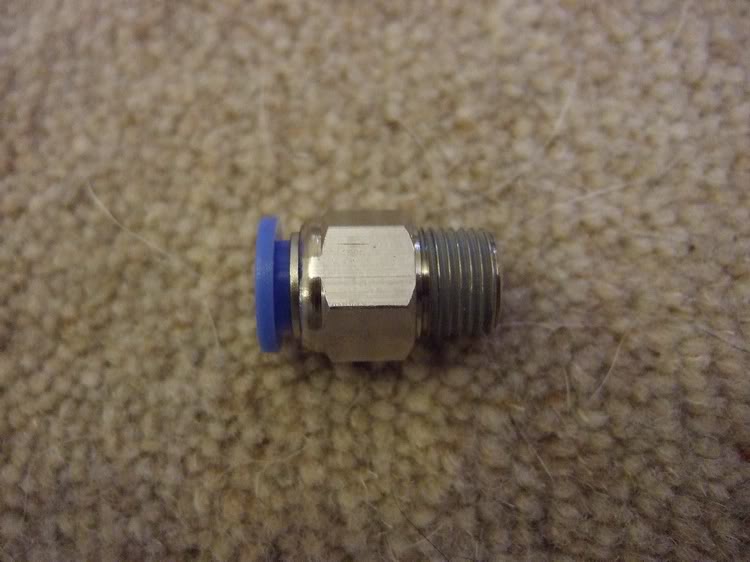 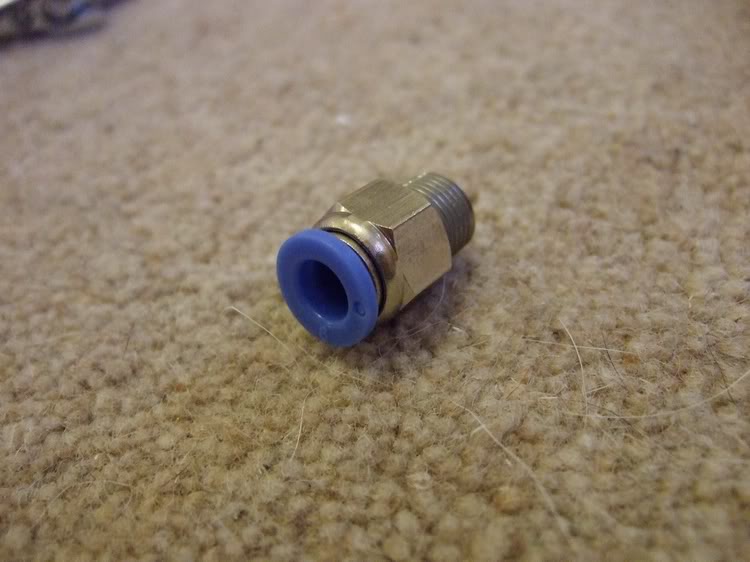 I got it from Simply Pneumatics.

This you then have to screw onto the regulator and tighten using the wrench. As you can probably see it is supplied with a plastic coating on the thread. This was also on the connector I removed and I assume ensures an airtight seal that can withstand the pressure. 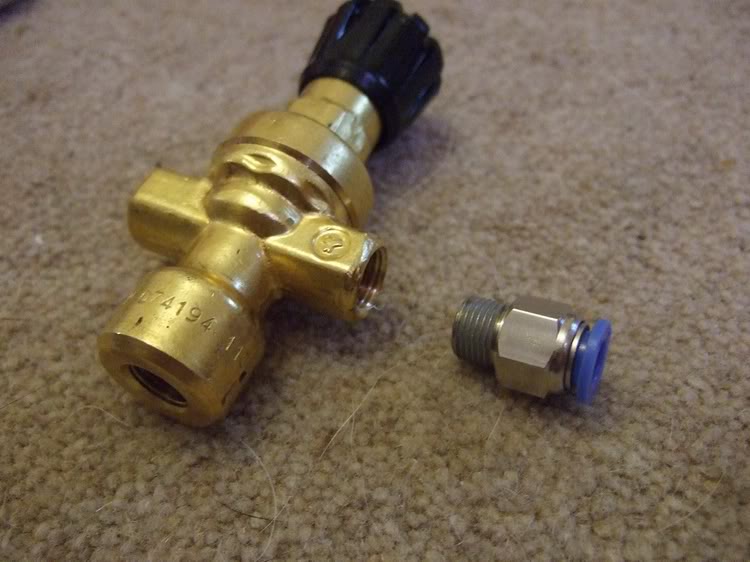 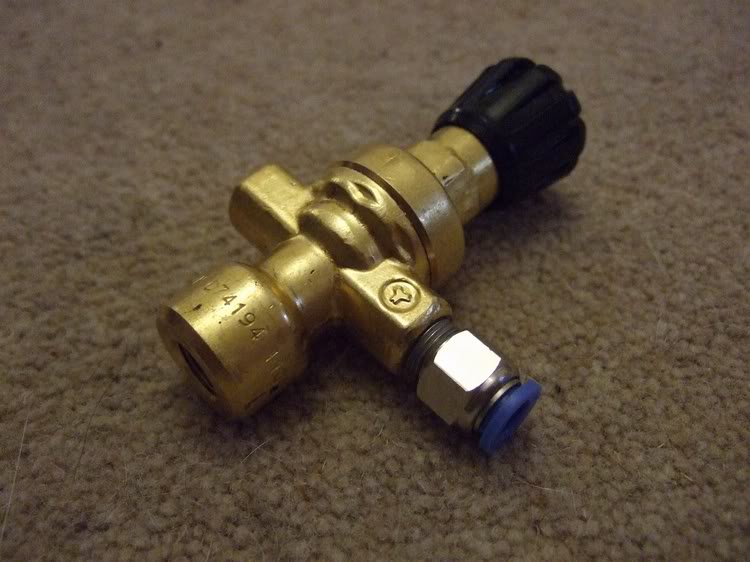 Then screw the adapted regulator onto the cylinder. 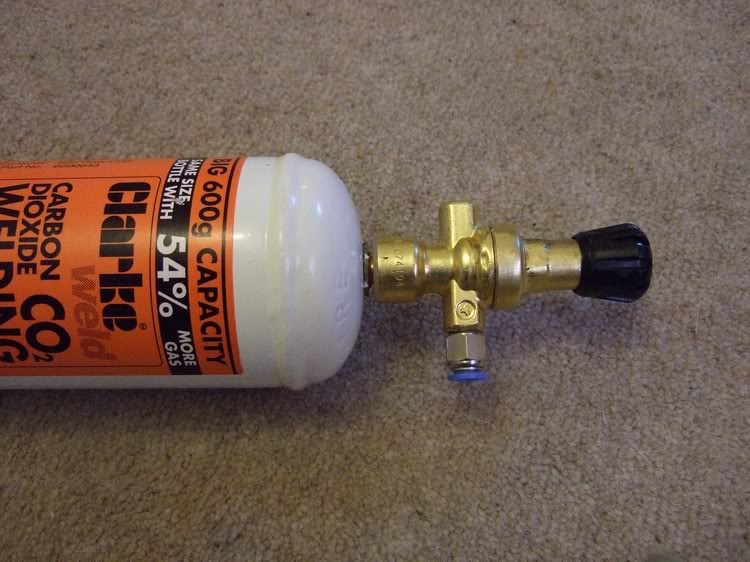 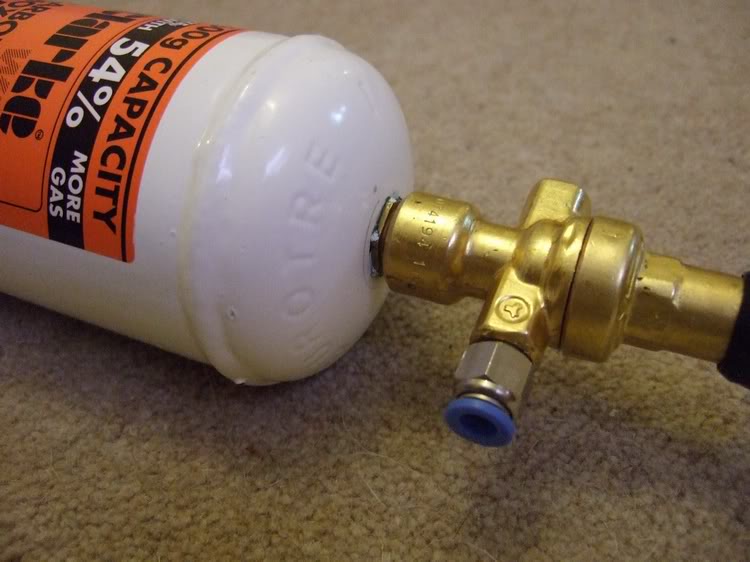 Then â€˜pushâ€™ one end of the CO2 tubing into the 6mm connector you just added to the regulator. This process required a reassuring bit of pressure and I could feel that it was a good fit. It is after all a pneumatic connector so should cope quite happily with the pressure, one of the advantages of using the connector I have. 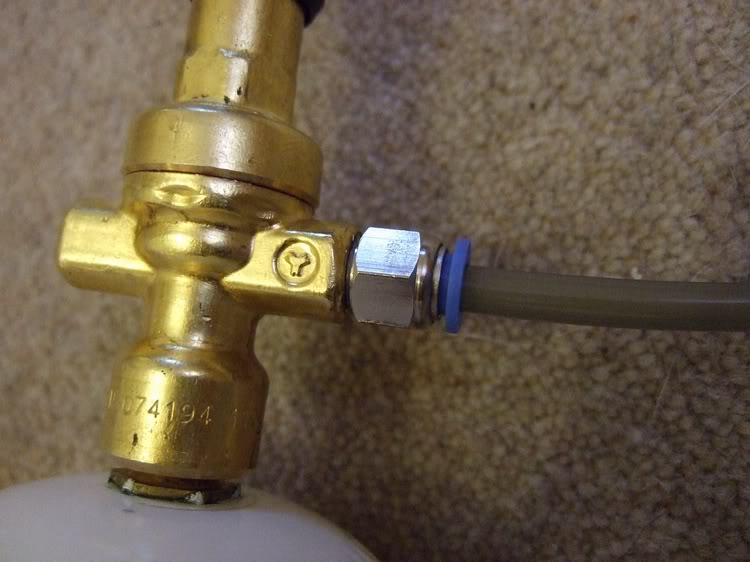 The next hurdle was to incorporate some kind of needle valve to allow the CO2 rate to be controlled. As most will have realised the regulator doesnâ€™t have a needle value built in.

Fortunately our very own AquaticMagic can supply this. 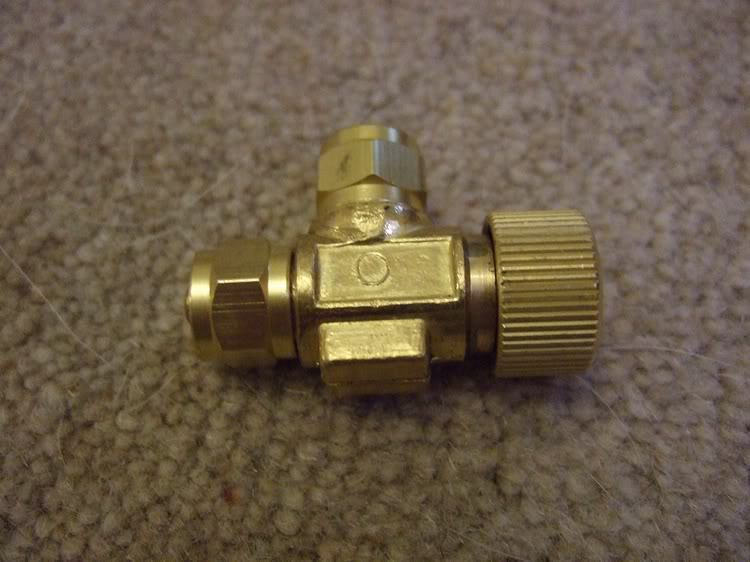 Unscrew both the tubing fixings and add the CO2 tubing, which can be purchased from lots of places but AquaticMagic do that also. 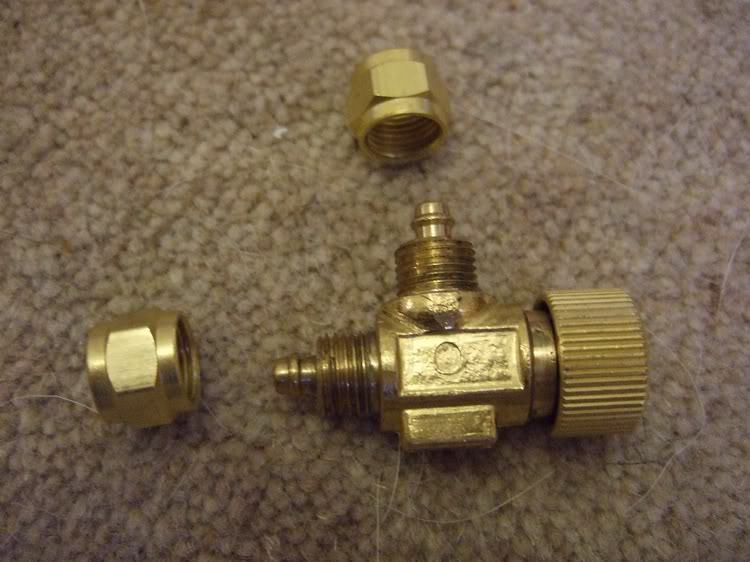 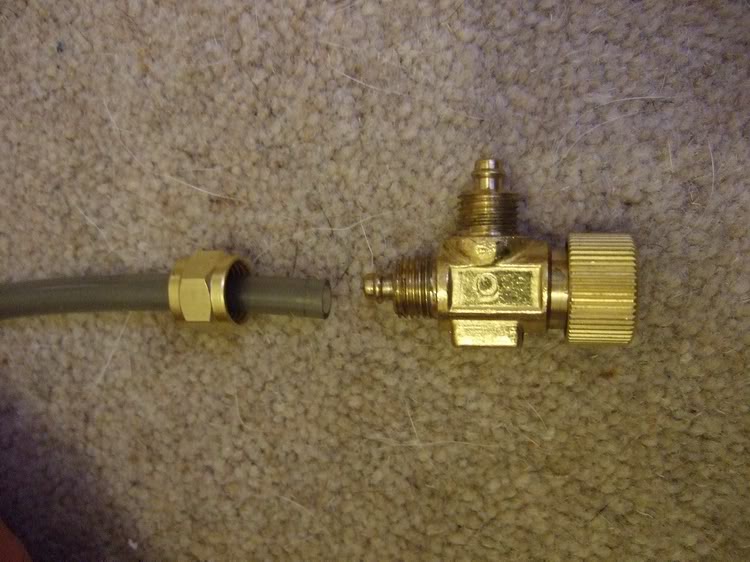 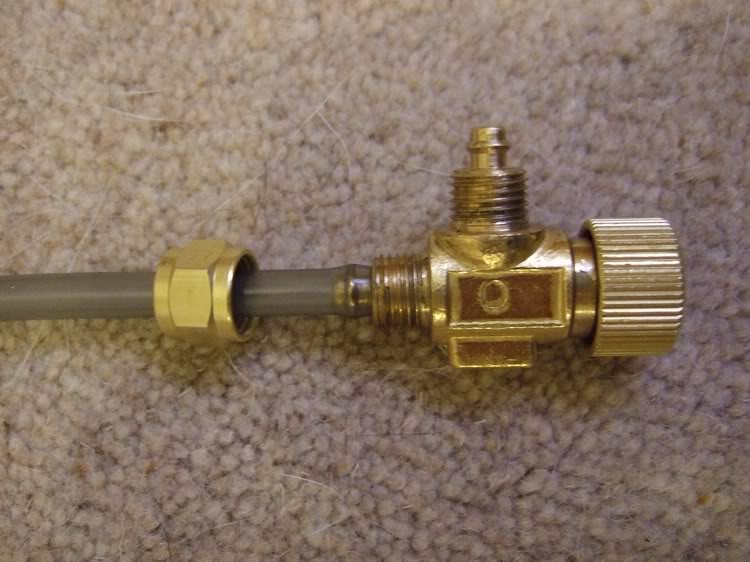 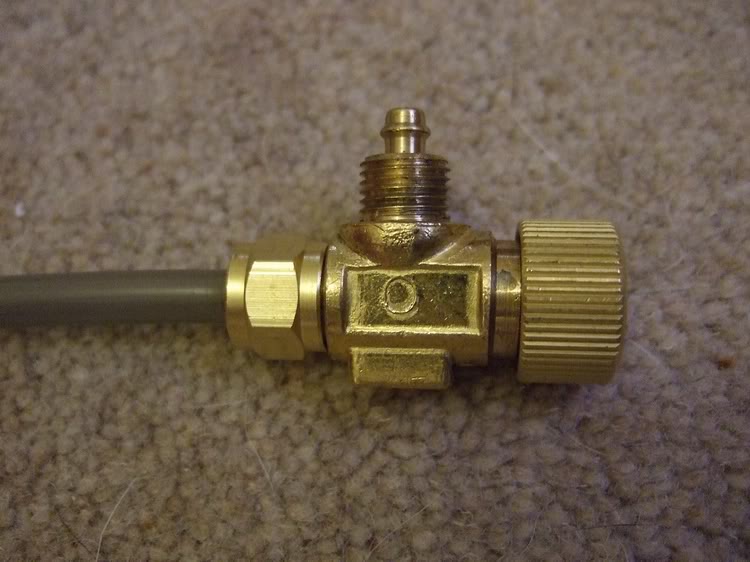 And the same on the other one. 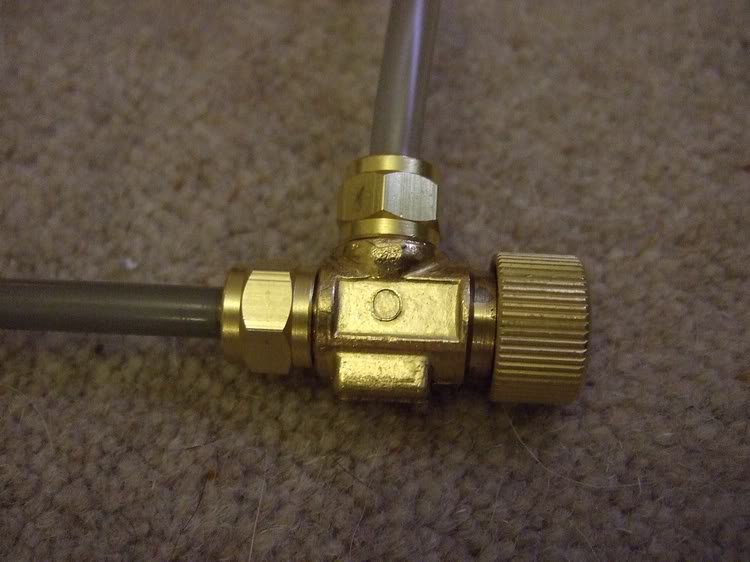 Then all that is left is to add the diffuser, its up to you which you chose, but I like the nano glass diffusers, which Iâ€™ve even used on my 250lt tank, so to my mind there is no reason to get anything bigger. Iâ€™m also a fan of the cheapo inline diffusers.

Here is the complete system. I dunked the whole thing into my 4ft tank with the regulator fully open and am pleased to say not a single leak obviously you could reduce the length of the CO2 tubing to fit as necessary, I just used what I had laying around. 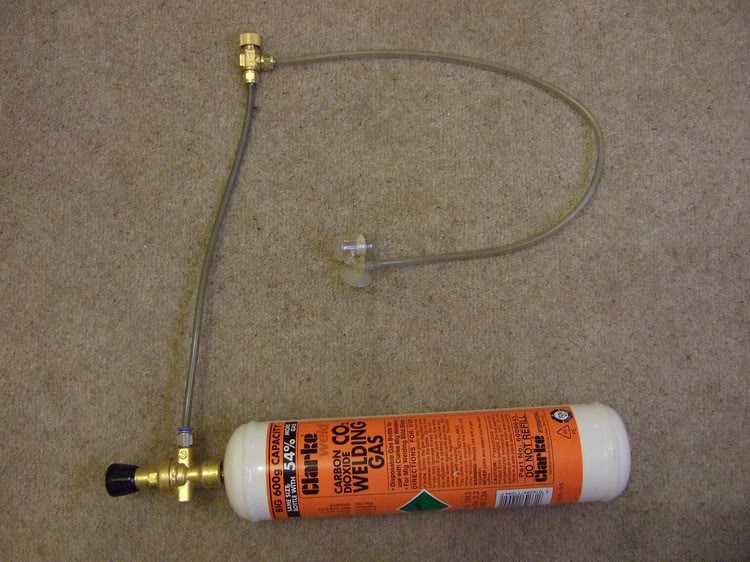 Right to costs, all the below costs include postage where applicable.

Pros = Cheap available to everyone who can buy stuff online (ok an obvious point but I think an important one), easy to set up (would take less than 5 minutes once you get all the parts), easily adaptable to add extra parts such as a solenoid or even an adaptor that allows you to use refillable cylinders and/or fire extinguishers.

Cons = main one is that is doesnâ€™t have any gauges, so youâ€™ll not know when the CO2 is about to run out, but as this was really an exercise in being a cheapskate I went for the gaugeless regulator. I will just make a note of when the cylider runs out and put a memo in my phone to remind me to replace it before the next one runs out. There are regulators for disposable cylinders that have either one or two gauges but these cost a fair bit more. 600g cylinders will also limit the size of tank you could reasonably use it on. Currently this is on my 60lt tank but I reckon could be used on tanks up to 100lt without using the CO2 at a stupid rate, which hopefully makes it suitable for most tanks.

As a final word, I happened to have laying around a busted lunapet regulator, which Andy (Supercoley) said the needle value could be unscrewed and used in place of the 1/8 6mm adaptor above.

This has the added advantage of having a needle value built in. You can buy these separately, but I could only source these from Germany and the postage cost made this option just too costly. But if you want an â€˜all-in-oneâ€™ solution its worth remembering, a bit of searching and you might find it cheaper.

EDIT - this has been suggested as a replacement for the push fit connector and as it has a needle value built it removes the need for the co2 hosting between the reg and needle value. I've not tried it but it would make the whole system a lot simpler.

I hope this is of help to some people.

Following some recent threads I've found that Lunapet post a needle value to the UK for just 2 euro's. So you can have the co2 tubing connector and needle value built into the same attachment and for aorund £10. This is the one I've mentioned later on in the this thread and I've used in my system

Great article for those on a budget who want to try pressurised CO2.
I'm sure there'll be many people who thank you for spending the time putting the article together.
Well done.

Thanks guys, hopefully some people will find it useful.

Just to add that it should be very easy to adapt this kit so it can be used on FE's by adding the D&D CO2 adaptor. I've not tried this but I dont see an issue with it in theory, the D&D regulators work in exactly the same way

This is a great thread Sam. And this set up will be great my 60lt. I was wondering can you add a timer to this setup to have it come on a hour before my lights do. And if so is there any links you could post as Im not sure what Im looking for ty. And another question how tail is the bottle of co2 and can you get a stand to sit the bottle in. Once again great thread Sam
60L/ 15w T8 Arcadia Orignal Tropical lamp, T8 Arcadia reflector/ Tetratec 600 ex/ Playsand sub/ Easy Carbo, Profito.
T

If you want the CO2 to be time-able, you will need to get what is called a 'solenoid'. These tend to be fairly expensive and I personally dont use them. Google 'aquarium co2 solenoid' and that should give you the prices and shops that sell them, this is the type of thing you are looking for.

I will add though, that if you want this, then you might be better off going the Fire Extinguisher route as you can get regulators with solenoids built in if you do that

The CO2 bottle itself is approx 30cm long not including the regulator which adds a further 7cm. I dont know of a specific stand that is avilible but JBL do one for their cylinders which might be suitable, but I cant find it for sale.

I've got my cylinder laying do, which probably isn't the best idea but it seems to be ok so far!

Thank you for the links but I think I will do your way. Can you shut the co2 bottle on and of once its been set up. Or do you leave it going 24/7. Sorry about all the questions just a co2 newbee

If you don't use a solenoid just leave it running 24/7.

you can manually switch it off but that means every morning playing around to get the right amount of co2 to be injected. (BPS)

Good work on the guide.
I used these cylinders for welding. got them cheeper when i got them in 10's about Â£8 each i think.
Regards
Matt
L

Very nice indeed. This is what I was looking for a nano tank recently donated to me. Thanks a lot.

It could be even more compact - and cheaper - with one of these flow controllers (Â£3.87 + UK Shipping). They are available in 6mm Pushin - 1/8" BSPT Male connection. This would eliminate the need for the 6mm Push in M Stud connector, needle valve, and the tubing in between.

Regulators in ADA 2006 catalogue were shown to use flow controllers like these, so they may fit the job.

Are you happy with your disposable bottle regulator? I am thinking of building one soon.

Glad the guide is useful

That connector you suggest says only up to 10bar, the cylinders have a working pressure of 50bar I think, so it may not be able to cope with the pressure? Thats why I went with a pneumatic connector.

I'm really happy with the reg, but then I don't really suppose it can go wrong. Since setting it up, I've only changed the co2 rate once just to get the DC a little yellower, but basically I just leave it alone!

I've checked the datasheet for a Sealey regulator (very similar to your Draper) and it states that max output pressure is 4 bars (input pressure is 110 bars). So it looks compatible. No big deal if it isn't anyway...

Just looked, postage is Â£4.50 which makes it only 2quid cheaper, but it is a neat solution.

Top guide, will keep an eye on this.

I didnt notice any problems when I hooked it up but I didnt run it for very long. Wouldn't think is would a be a problem, the tubing is pretty tough stuff.

wow, its really as easy as that! I thought it was way way way more complicated.
T

Na it really is that easy!