Collecting your own rocks - aquarium safe?

If you decde to collect your own rocks, how would you be able to determine if they are aquarium safe?

I gather limestone is a no no. Is there anything else to look out for?

I love the aquarium rocks for sale online, like dragon rock etc, but I’d prefer to be able to see them before buying them, so grabbing your own for free jwould be great.

Many of the rocks we use in our aquariums are inert and do not react chemically with our tank water, for instance those that are mainly composed of silica, like smooth river bed pebbles or cobbles.

But quite a lot of rocks that are great to scape with are not totally inert and may have some effect on water parameters. For example, a lot of the rocks sold by ADA like Seiryu, Manten, and Ryuoh are actually all types of limestone, but at various stages along the metamorphic spectrum, and so of varying hardness. Depending on water parameters they can, over time, leach carbonates which may have an affect on TDS and pH; but nothing any more sinister than that so they are OK. A vinegar test is a good way to find out if a rock is composed of carbonates and likely to react with our tank water; the rock will effervesce.

That said, regular and substantial water changes typically necessary with eutrophic fertz dosing methods means that these reactions will have a minimal impact on water chemistry.

Other rocks like sandstone will usually be okay, but in the case of sandstone it's the cement that has the potential to change water parameters. It usually contains some carbonates, and a lot of iron, the latter of which gives sandstone it's orange/red colouration.

I suppose the point is - it's not just what the rock is made from that will determine whether it's suitable for scaping it's also how hard it is as well, and how often you change your water, and also to a degree on local water chemistry. For instance, if the water out of the faucet is acidic then it will be more likely to react with any rocks that contain carbonates.

Anyway, builders yards and garden centres are great places to go hunting for cheap hardscape so don't be put off by water chemistry worries. By the very nature of their intended use, landscaping, they will usually be hard and therefore often safe to use for aquascaping, but at a fraction the price of Gucci rock sold in aquascaping shops.

If you have doubts about a rocks suitability for use in an aquarium you can soak it in a bucket and test the water over time for any changes in chemistry.

I bought the slate below from a garden centre, a while back, for £1.00 a chuck; a well known UK aquascaping shop at the time was selling the same for £££ more.... 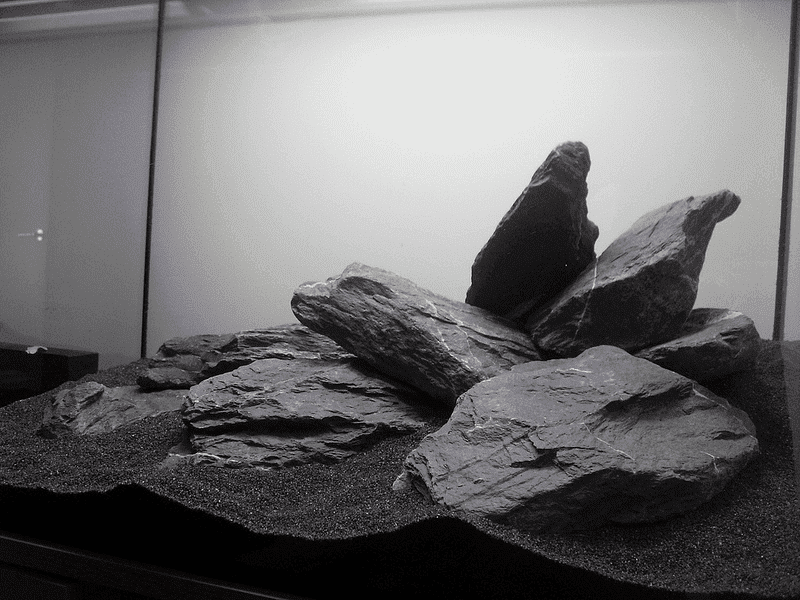 I have Ardenn coble stone which is a calcite rock in use in several occasions, in an aquairum and a garden tub. If vinigar or moriatic acid is put on, it fizzes like mad. But it doesn't realy react with my water that is rather soft too. It would take a lot of neglection in water changes before it alters the water chemistry measurably. I guess it also is a bit of an old school rule of thumb from times water changes were considered a bad idea. With the nowadays adviced weekly water changes we can use a lot more than we used to in the past.

Hi all,
Any old hard rocks will be pretty inert. If you don't mind rounded rocks, any rounded water washed cobble will be OK, they only end up rounded if they are really hard.

Cheers all. Couldn’t have asked for better advice.

Think I’ll make a trip to the local quarry soon and see what I can find.
You must log in or register to reply here.