I've had six of these Corys for about a year now, all super fat and breeding. I've actually had four fry survive to adulthood in this tank with no input from myself. Unfortunately all the youngsters perished within the last week and a half. Furry growths, extra slime, the odd shiny scale I'm guessing was lifted, lethargy. They all fought well and had an appetite until the end. All had previously had a course of praziquantel.

I finished a five day course of esha exit and 2000 a couple of days ago and have done a couple of big water changes however I've just noticed a full blown infection on one of the adults. Unfortunately she's moving little and breathing faster than the rest. I can see a halo of something all over her (see pic - particularly obvious towards tail end), dots around her head, pronounced edge where side meets belly and a shiney scale. Camera shows more than I can actually see in person.

The only thing I've changed was to add two peace lilies wc 25.4 22. Roots were washed and no chemicals used. Never heard about anything related before?

Any help in diagnosis would be very much appreciated. I have imidiate access to esha exit, 2000 and flukesolve (praziquantel?) but will try anything. Only other fish are honey gourami. FTS and patient shot attached. 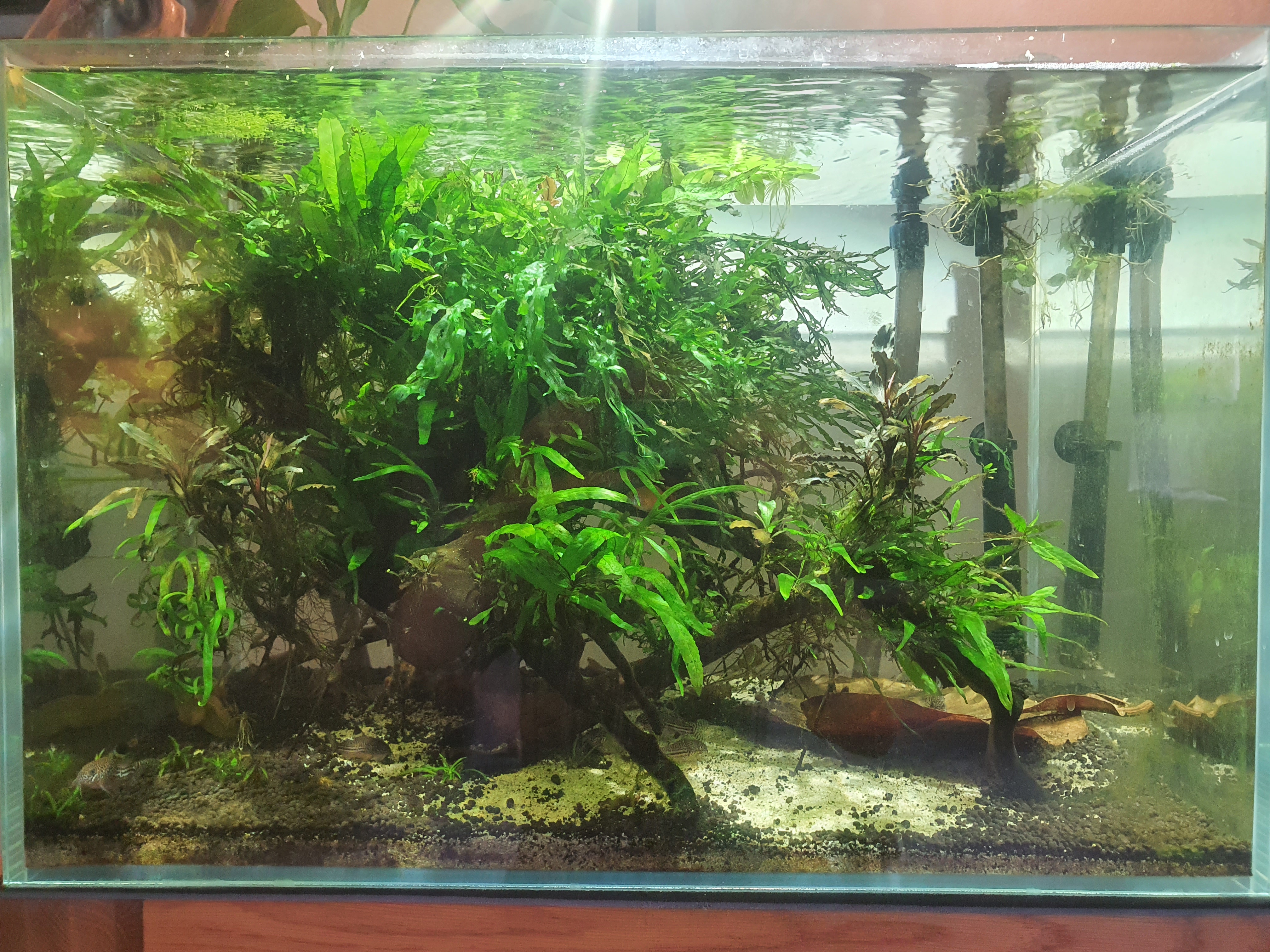 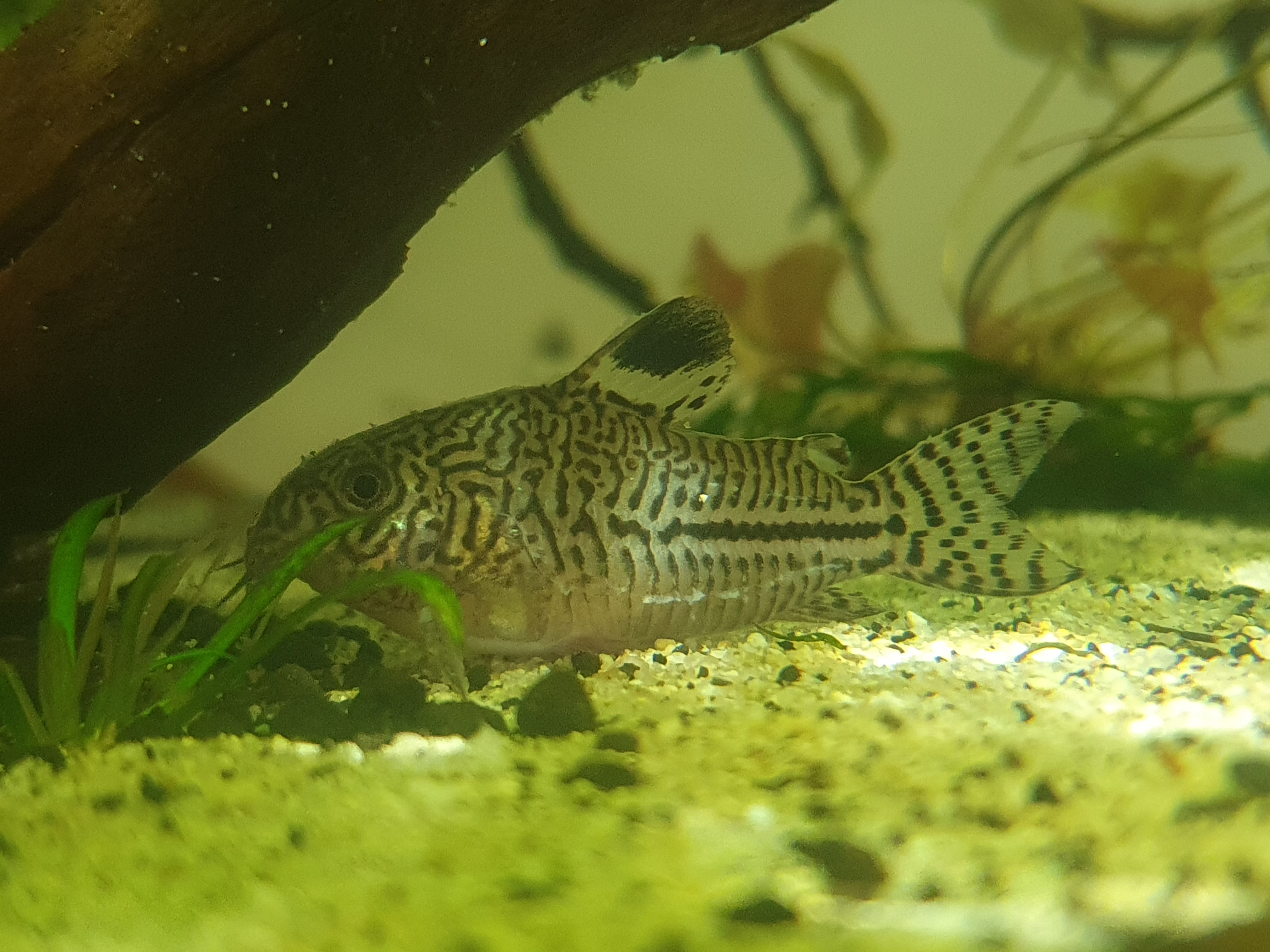 Hi, I have some questions -

1. No idea, I can find the local water report if required. I only measure tds, when it gets to ~150tds I do 50% change with prime. Evaporation is 2ltr p day. I use a one 2ltr jug, take two jugs out and top up to the top of tank. Good soft water, don't believe it to be a supply issue.

2. Less than ought to be as per most. I ought to get a pre - pre filter as per Darrell. Rest as above.

3. Isolated to the one for now but she's gone down fast, unlikely to make tomorrow.

6. They were before dosing exit and 2000 but not anymore.


Thank you for your help @xZaiox

I think it's generally a good idea to have a test kit on hand for ammonia and nitrite, as testing the water is usually the first response to any problems in the tank, but since you've had the tank up and running for over a year now, I'm going to assume everything is stable.

I'm a bit unsure what's going on in those pictures because it looks like a bit of an odd presentation to me, I'm wondering if it could be some sort of slime disease or something. You said that the fish were previously flashing/itching before you dosed the esha meds, and if I had to guess I would assume this is either parasitic or bacterial. If it were me I would start giving that Cory cat dips and baths in either Paraguard (Seachem) or Methylene blue (these can help with both bacteria and some parasites), and I would be doing large daily water changes in the main tank in order to reduce the level of organics (like 50% daily water changes). When a fish sick, it becomes easier for background levels of bacteria to get a hold, so giving them pristine water is even more important.

Do note that this is just my opinion though, I don't know for sure what's going on and this would just be my response. I hope she pulls through!
Regards, Ed
A

Hi @DTM61
Corydoras can't get enough food on coarse substrate, they like fine sand. They are hungry and their autoimmune system is compromised. What they need is less chemicals and toxic medications. If you clean it up with water changes and stop using "medications" and let them dig up mulm they will get better.

Looks like the disease is along the lateral line sense organ so it could be an infection spreading along the lateral line canal. There is also slime dotted elsewhere on the body showing that it has spread. The lateral line canal is a good entry point for opportunistic pathogens and parasites. Like others have said, this happens when the slime coat in compromised. As it is a topical infection, it would be hard not to suggest a protozoan disease. Baths and dips are a great place to start, like recommended above. If it comes back then it would be one of the more infectious forms of slime disease and you might then need to consider decontaminating your aquarium. But ultimately you need to work out what caused it and mitigate that.

aquanoobie said:
Hi @DTM61
Corydoras can't get enough food on coarse substrate, they like fine sand. They are hungry and their autoimmune system is compromised. What they need is less chemicals and toxic medications. If you clean it up with water changes and stop using "medications" and let them dig up mulm they will get better.
Click to expand...

??? The owner has had these cories for a full year now, look at the size of them - they're clearly not underfed.
Regards, Ed

Thanks for the replies all👍

They're about as fat as can be, as @xZaiox says. I see new eggs everyday. This is the confusion - it doesn't seem like a water quality/ nutrition issue as they are perfectly healthy until they're a day away from death. Unfortunately she died last night.

All the rest look as normal. Did a 50% water change and will continue everyday for a while, and hope for the best.

Are there any chances of the recently added emergent peace lillies bringing something in? It's the only thing that's recently changed and I'd like to rule it out as I've removed them as a precaution.

Many thanks for all the replies 👍
Dan

DTM61 said:
This is the confusion - it doesn't seem like a water quality/ nutrition issue as they are perfectly healthy until they're a day away from death. Unfortunately she died last night.
Click to expand...

Sometimes it can also depend on the age of the fish, a lot of older fish will get compromised immune systems and get sick whilst the rest of the fish in the tank are fine. The only thing that concerns me is that you mentioned the young corys died in the same way as this one.

DTM61 said:
All the rest look as normal. Did a 50% water change and will continue everyday for a while, and hope for the best.
Click to expand...

This is a good plan.

DTM61 said:
Are there any chances of the recently added emergent peace lillies bringing something in? It's the only thing that's recently changed and I'd like to rule it out as I've removed them as a precaution.
Click to expand...

I believe peace lilies are fine to have as emergent growth as long as only the roots were kept in the aquarium (I presume none of it was rotting?). I personally wouldn't see any way they could cause this, because as both me and Simon seem to think, this looks somewhat like a form of slime disease, which is usually parasitic in nature. Aquatic parasites will only really be found in water, not the soil that your peace lily came from. Even if it was bacterial, I'm not really sure how the peace lily would have caused it unless it was rotting and fouling the water, which you should be able to smell quite easily.

I think your plan moving forward of keeping up with 50% water changes daily is the best plan of action, that way the water will be in top condition for the others corys. If after all of that, you see this disease happen again, then I would go ahead and treat the entire tank, because that would tell me that something pathogenic is in the tank and not leaving. Hopefully it won't come to that though! 🤞
Regards, Ed
You must log in or register to reply here.