Hi there. This is a journal for a tank that was an idle daydream, until I clicked order on the new Dennerle Scaper's Tank from Hobby Shrimp and dropped myself right in it, so to speak! It's a posh tank by my standards, hence the title.

I quickly emailed Ed at Freshwater Shrimp and went to pick up some wood and rock (they are, dangerously, just around the corner from my house). I chose several small bits of Manzanita and some Seiru that was Ed's personal collection, which he offered me when he saw the greedy look in my eye (thanks and apologies Ed). 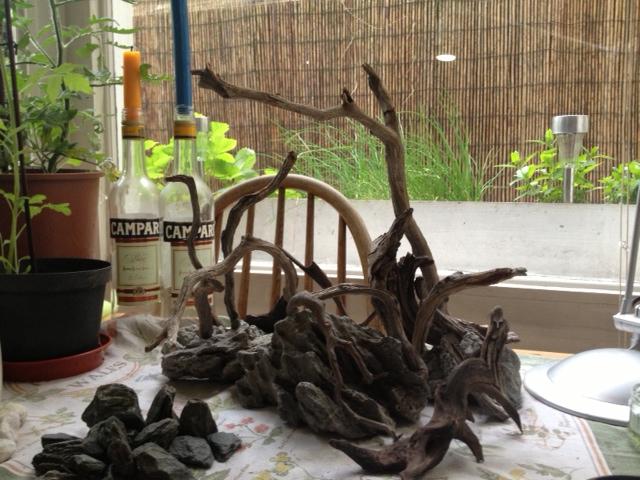 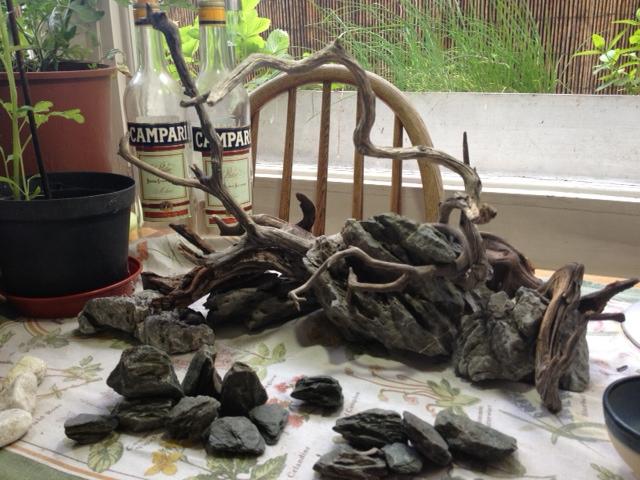 The tank came the next day. Great service! 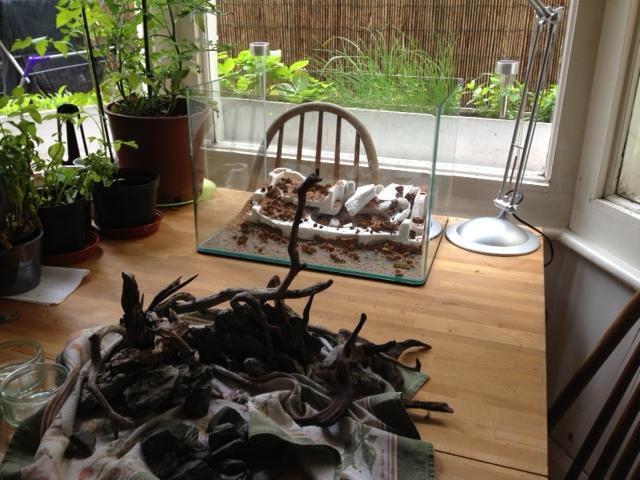 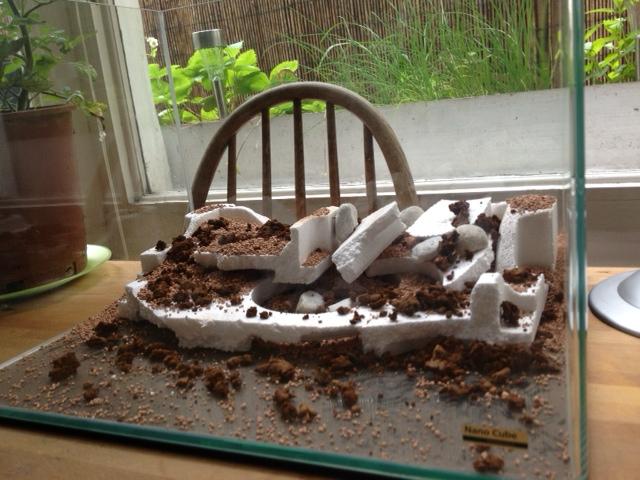 This is going to be an experiment with low-tech/semi-low-tech methods. To begin the experimentation I built up the substrate with polystyrene. That's some Bonsai clay and Green Machine Wabi Kusa clay scattered around it. 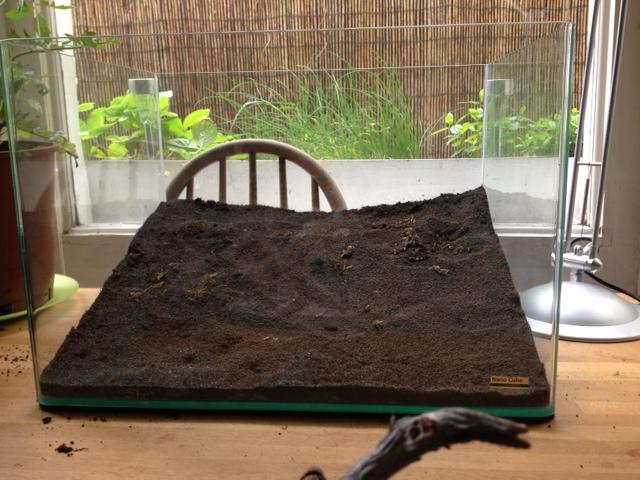 Topped with John Innes Seedling Compost. Looks thick, but is really only an inch or so because of the polystyrene (though I did remove some of it). There's also a scattering of ADA Amazonia powder left over from my 30cm high tech: Seven Moss Cube, and a little bit of Sphagnum moss that was also mouldering in a bag out in the shed.

I tried hot-glue to fix the Manzanita to the rocks, but it didn't work too well. Went with black silicone instead. I hope I've done it effectively enough. We'll see when I fill it! 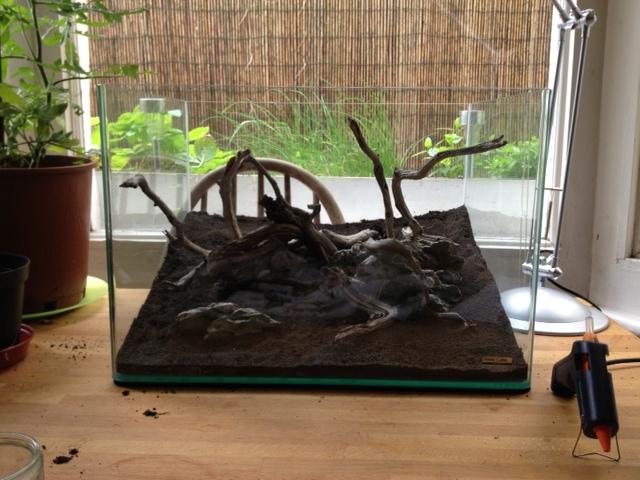 The Amazonia was not quite enough covering, so I quickly got some work done, (working from home + tanks = massive procrastination!) and then tubed into town to pick up some gravel from the ADC on Great Portland St. Came home with Dennerle black quartz powder, and a bag full of plants. 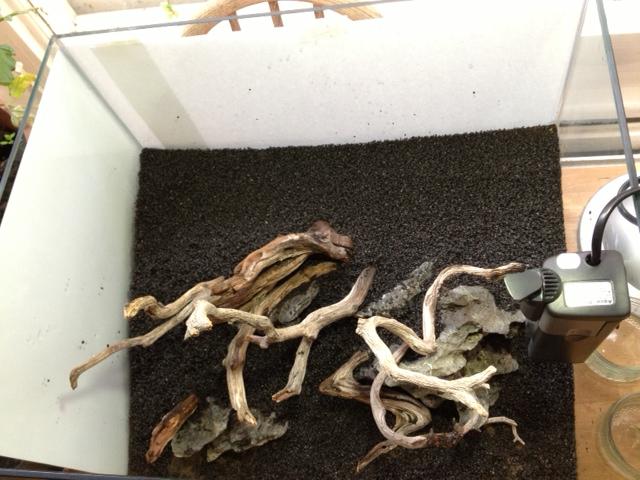 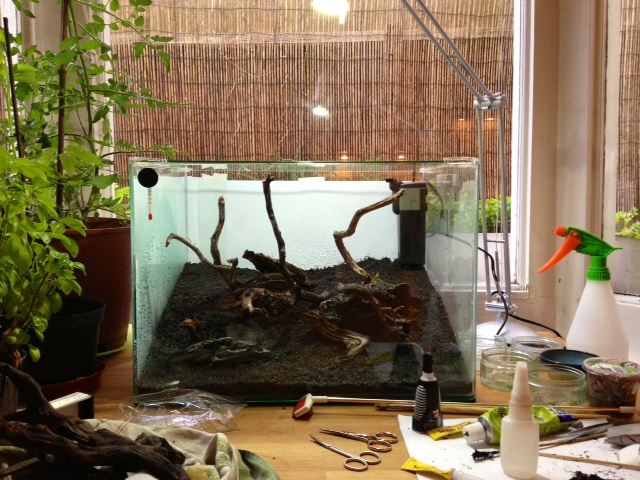 I individually superglued a few tiny strands of Java moss to the wood, and a tiny bit of Christmas moss onto the rocks. These were cuttings from the 30cm.

Going to try to get some mulm today from the external filter on my 30cm, to get bacteria started in this tank. The little internal filter you see here is a stop-gap until I get something more substantial.

Oh yeah, the main challenge with this tank is going to be light. Keeping it down that is, as it's going to be using mostly natural light from a south-ish facing window. The window is blocked by the house next door so doesn't get more than a couple of hrs direct sunlight, but still it's going to be interesting. Hoping to use a more elegant backing than a couple of bits of printer paper, and lots of floating plants, and maybe emergent plants too.
Tanks: Mangrovium Monstronarium ii
Monstronarium (Finished)
Crypt's Palace (finished) Roots and Lava v2 (finished).
Instagram: monstronarium

that's a great looking start I like the polystyrene idea, may have to use that one in my tank!

Sorry to be dim, but is the polystyrene glued in place to counteract the buoyancy? If so, with hot glue? Does hot glue hold up underwater long term?
Stickleback Shallows Journal 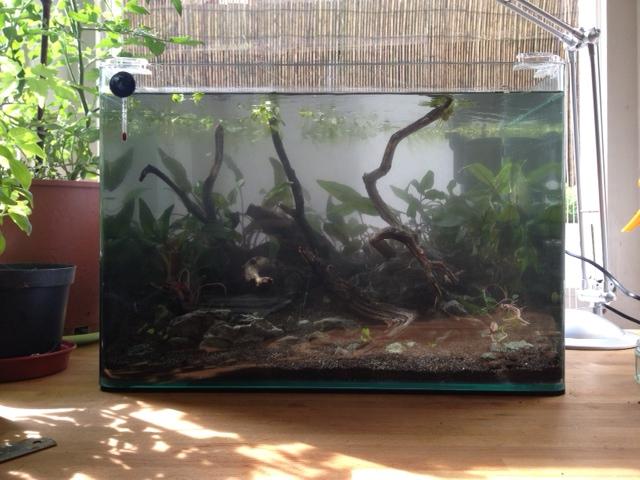 Initial planting...
Crypt Wendtii Brown
Crypt Spec Indonesia
Crypt Spec Flamingo (given to me as a deal as it was very sickly)
Hydrocotle Tripartita (cuttings from other tank)
Christmas Moss
Java Moss

Floating:
Amazon Frogbit
Salvinia Natans (I think)
A couple of sprigs of Hornwort

Hi Mike, the polystyrene isn't glued. It's held down by the weight of the soil and gravel on top. I did remove most of the smaller pieces, so it's mainly one big bit. I found the hot glue wouldn't hold the Manzanita onto rocks, so I used silicone instead. Other people on the forum seem to be using hot glue for all sorts though.
Tanks: Mangrovium Monstronarium ii
Monstronarium (Finished)
Crypt's Palace (finished) Roots and Lava v2 (finished).
Instagram: monstronarium

So have you tried the setup with water in? Does it float?

Even if it doesn't at the outset, I wouldn't be able to sleep at night because of visions that one day something would disturb it and it would come floating to the surface like the bloated corpse of a long-dead... (sorry got carried away).

You could consider using Gorilla Glue to stick it down, works well underwater, just be careful not to get it on the glass, especially the seals, where ot might be difficult to remove completely.
Stickleback Shallows Journal

I'm really not worried. Not only does it have a couple of kilos of gravel on top of it, it has at least two really large bits of Seiru stone on top too. Water's in, plants are in. Shows no sign of moving whatsoever.
Tanks: Mangrovium Monstronarium ii
Monstronarium (Finished)
Crypt's Palace (finished) Roots and Lava v2 (finished).
Instagram: monstronarium

Thanks Alastair! Your latest, and Big Tom's are a huge inspiration for what can be done with low tech. I feel calmer already.
Tanks: Mangrovium Monstronarium ii
Monstronarium (Finished)
Crypt's Palace (finished) Roots and Lava v2 (finished).
Instagram: monstronarium 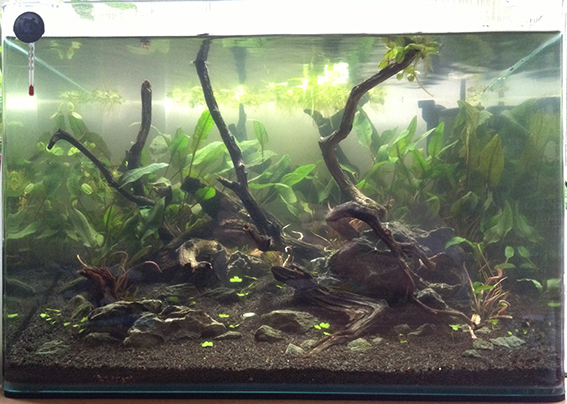 1 day since setup.
Trying out a cool white 12W cree LED GU10 bulb (from ebay) in an old Ikea desk lamp. I've really not worked out how I'll balance artificial light and daylight. Currently just covering sides and back, and sometimes even the top with paper to keep it all minimal.

Got an Eden 511+ filter with inline heater coming from Aqua Essentials, but I'm thinking actually the flow may be too much for low tech, and that it'd be better to swop this with the smaller Eden 501 from my 30cm high tech. That'll be some fun faff...
Tanks: Mangrovium Monstronarium ii
Monstronarium (Finished)
Crypt's Palace (finished) Roots and Lava v2 (finished).
Instagram: monstronarium 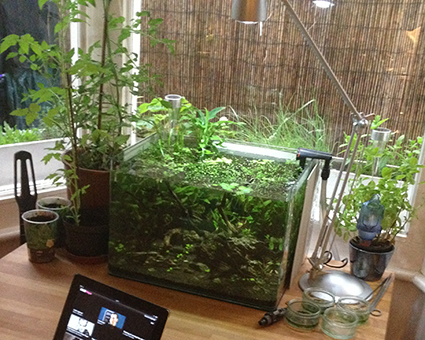 Running for about a week. I went with the larger filter on this tank for now, though I've had to choke the inlet right down in order not to sink all the floating plants. Today I replaced the hideous Eden 511+ inlet/outlets... 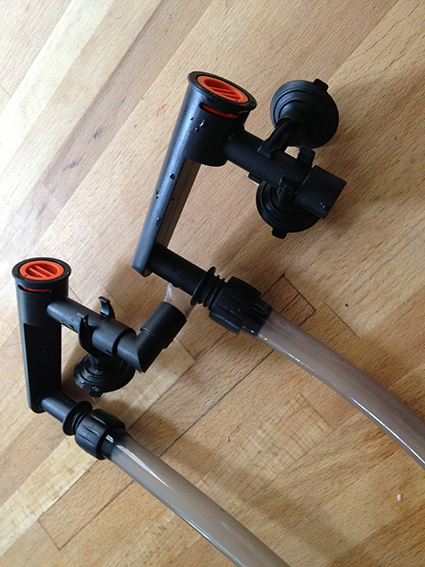 ...with some Aqua One 500 ones, available on the web as spare parts. Not as pretty as the glassware I've been eyeing, but will need a deal less cleaning! Had to fit an Eheim tap to the inlet tube to choke it down, since I had been using the orange dial built into the Eden one. 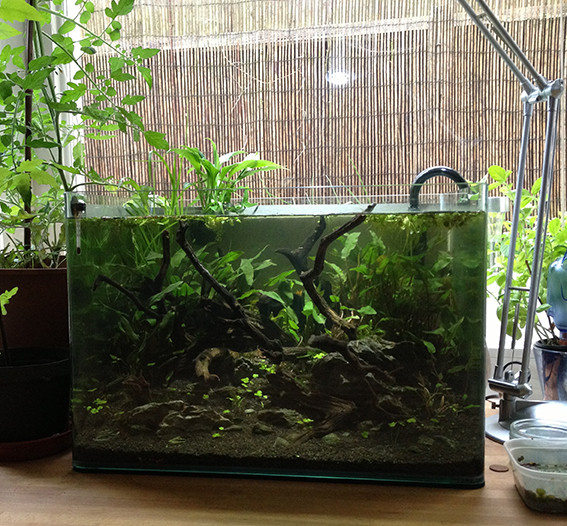 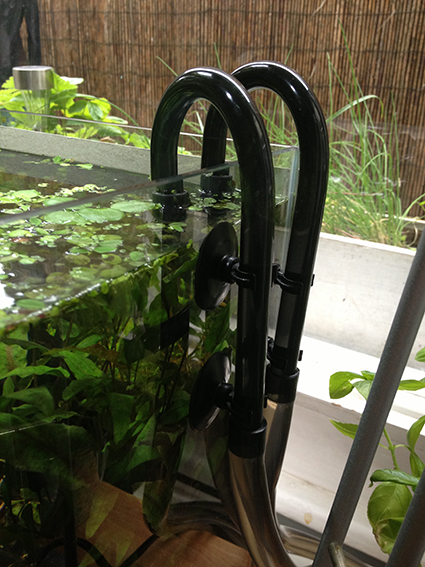 Dosing liquid carbon at 3ml a day. Changing water when I can be bothered. Just turning the light on dimly (using a plug-in dimmer) in the evening sometimes, and more of the day when it's dark and cloudy. Plants seem to be doing okay apart from the Crypt. Flamingo which has mostly melted (but was very ill when planted. Have planted some experimental sprigs of Hygrophila, Ludwigia, Hottonia, and Lysamachia at the back, and will be moving some Hairgrass and young Crypt Balansae in from my other tank when their replacements arrive.

Some of the wood has shifted, but since it didn't float I'm leaving it alone.

Oh yes, on the left I have planted what's supposed to be Cyperus Alternifolia (that was a messy muddy planting). I got it from ebay. I'm hoping it'll turn out a little like the ones on this tank. There's a small Peace Lily in a pot hanging on the side there too, but I don't know if it's staying.
Tanks: Mangrovium Monstronarium ii
Monstronarium (Finished)
Crypt's Palace (finished) Roots and Lava v2 (finished).
Instagram: monstronarium 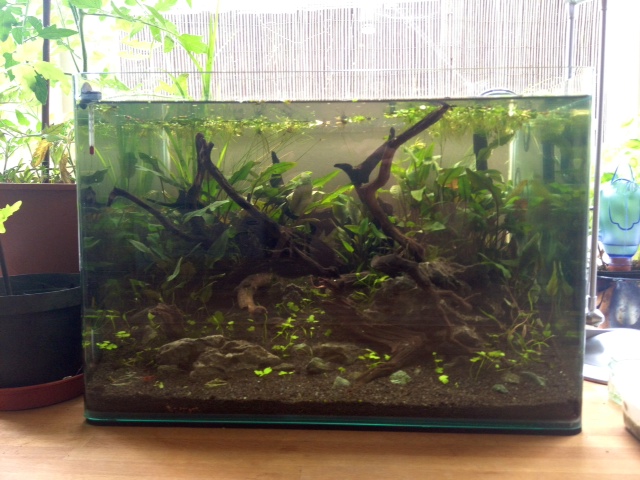 About 12 days in. The Hydrocotle hasn't gone as mad as all that, I keep planting cuttings from my other tank.
Lots of soil debris on leaves, but otherwise everything mostly doing ok. I've added some 1-2 grow E. Tennelus, and a few pieces of Crypt Costata and Undulatus, but I cut most of the leaves before planting as they were damaged (and emersed anyway).
Put two Cherry Shrimp yesterday to start cleaning up, and to act as scouts. They seem to be fine.
Tanks: Mangrovium Monstronarium ii
Monstronarium (Finished)
Crypt's Palace (finished) Roots and Lava v2 (finished).
Instagram: monstronarium
H

I have both. The 501 is good, and mine has been running for 4 or 5 years (though with a gap in the middle) Totally silent. But the flow is too little for high tech. It's only just enough for my 30l nano. I've got the 511 choked way down on this tank and may actually swop them over.

I have the 511+ with external heater which was a selling point for me and seems to work very well, and it's also as silent as the 501. It has a much more sensible locking mechanism so cleaning is easier than the 501. Others have voiced concern about how the flow passes over the media in the 511 and I can't say I fully understand the logic from the diagram, but it seems to be working anyway. Basically I found the 501 so reliable that I chose its big brother. Just depends on how much flow you want really.
Tanks: Mangrovium Monstronarium ii
Monstronarium (Finished)
Crypt's Palace (finished) Roots and Lava v2 (finished).
Instagram: monstronarium
H

My tank will not be high tech. Just a load of slow growing plants and a couple of German rams. I read the 501 just doesn't have any guts to it? Bare in mind I know Bugga all about planted tanks being I'm an African cichlid man you have to bar with me on my stupid questions of any. My worry is the 501 will not keep the water clean enough and move the water around enough too. Bit you think the 511 might be too much?

I guess it depends on the kind of low-tech setup. Given that some recommend no filter at all for soil substrate tanks! I think if the tank is well planted that the 501 would be enough (and as I said I'm considering switching my filters over when this one is mature, depending more on how my high-tech nano is doing). I used to run a larger high tech which slowly turned low tech with my 501 and never had filtration problems in either setup apart, I now realise, from flow/co2 when it was high tech.
Tanks: Mangrovium Monstronarium ii
Monstronarium (Finished)
Crypt's Palace (finished) Roots and Lava v2 (finished).
Instagram: monstronarium 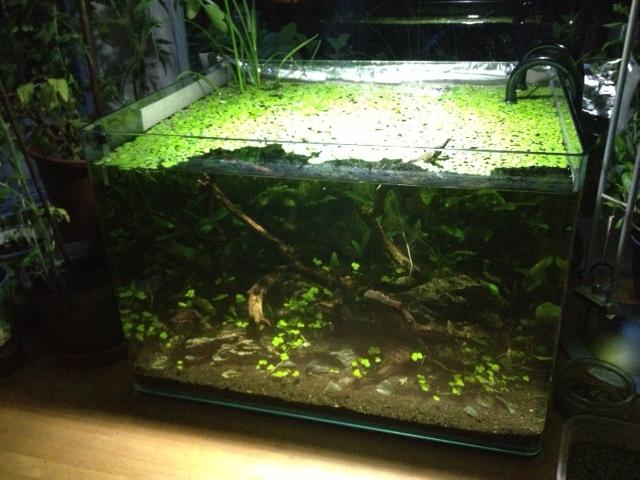 Managed to let the floating plants go mad in time for this sunny spell, and in time for leaving the tank alone for a few days (although to be honest I'm leaving it alone when I'm home anyway).

l. I wish my floating plants would multiply that quick. What floating plants are they? Think im going to have to remove the covers from my tank to lower the humidity and hopefully they will grow much better. Looking forward to seeing the tank progress.
You must log in or register to reply here.
Share:
Facebook Twitter Reddit Pinterest Tumblr WhatsApp Email Share Link