Current Tank and Other Goodies

As I'm new here, I thought it best to dive head first and share some of the plant related things I've done. Ignore the funky saturation, some of these were taken on my phone.

Thanks for taking the time to look
Daniel

Not really sure how long I've had this tank up and running. I think it has been up since August last year, but plants and wood have changed, as well substrate in part—there used to be sand towards the right. For now I'm happy with it as is and will keep it running into the near future. If I get bored I'll probably just swap some species out for new ones. For now I will probably keep tinkering with the emersed sections whilst they are in their infancy, nurse my stringy moss back to health (died off during a recent 40+ Celsius day when we lost power and couldn't have the air con on), and wait for the lilaeopsis to fill in. 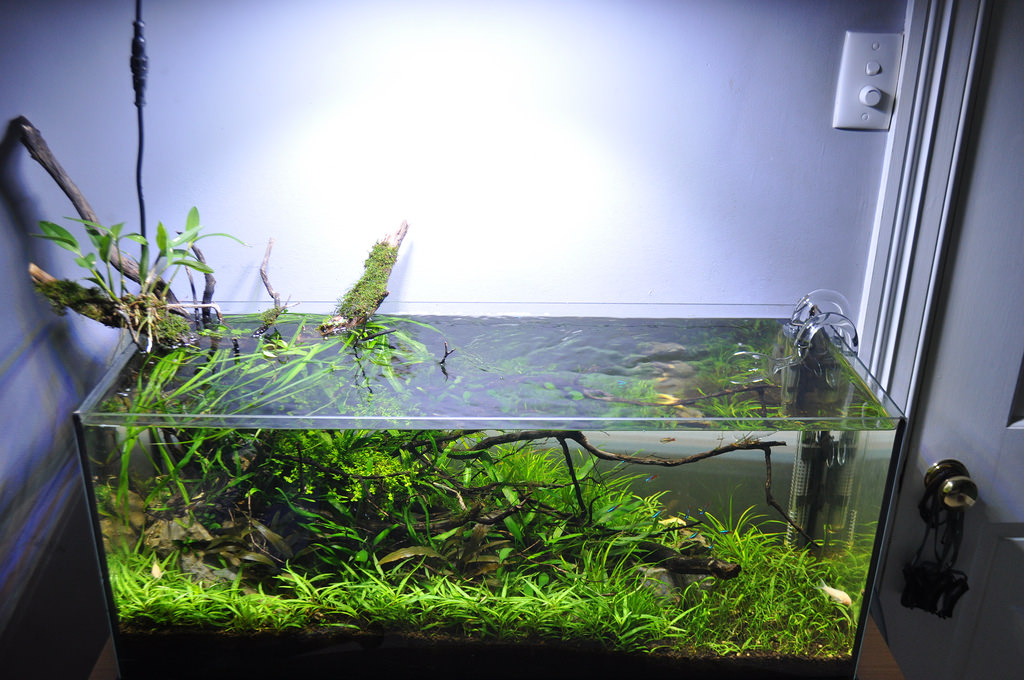 Really simple little display I set up using some old aquasoil, a dead lavender stump and a not in use ADA Aquasky. It's mostly a hodge podge of plants (like riccia, hydrocotyle, etc), but I like it. 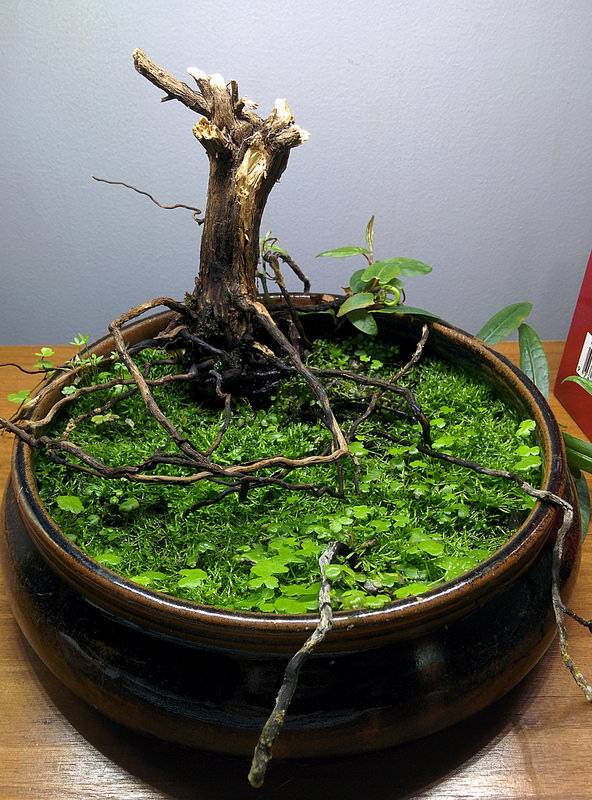 I don't really remember what was in the emersed section of this tank. There was an Echinodorus Ozelot Green, Persicaria sp. Porto Velho, Rotala Colorata, Ludwigia Brevipes and Arcuata, Hydrocotyle Tripartita, Frogbit and Duckweed. Livestock were pseudomugil gertrudae (spotted blue eyes).

This tank mostly looked after itself, which was good because it sucked to clean. In the end I had to break it down due to a major insect infestation. 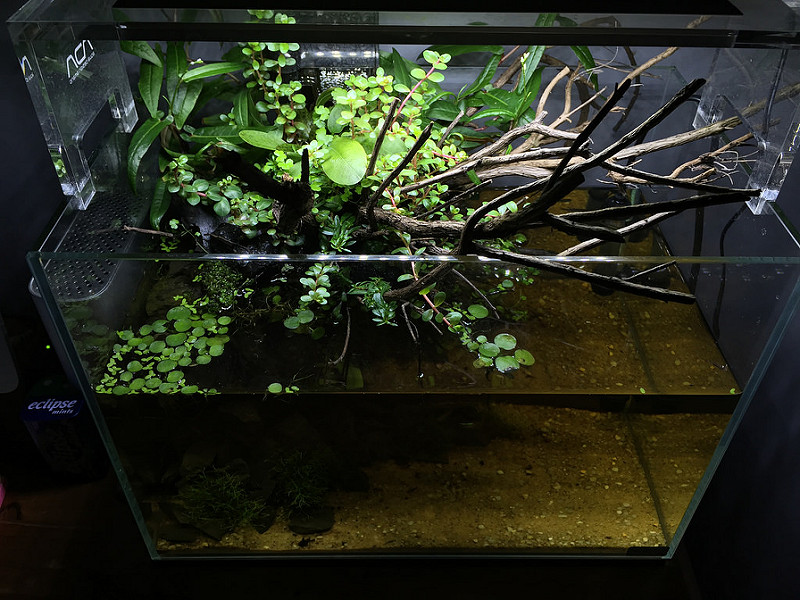 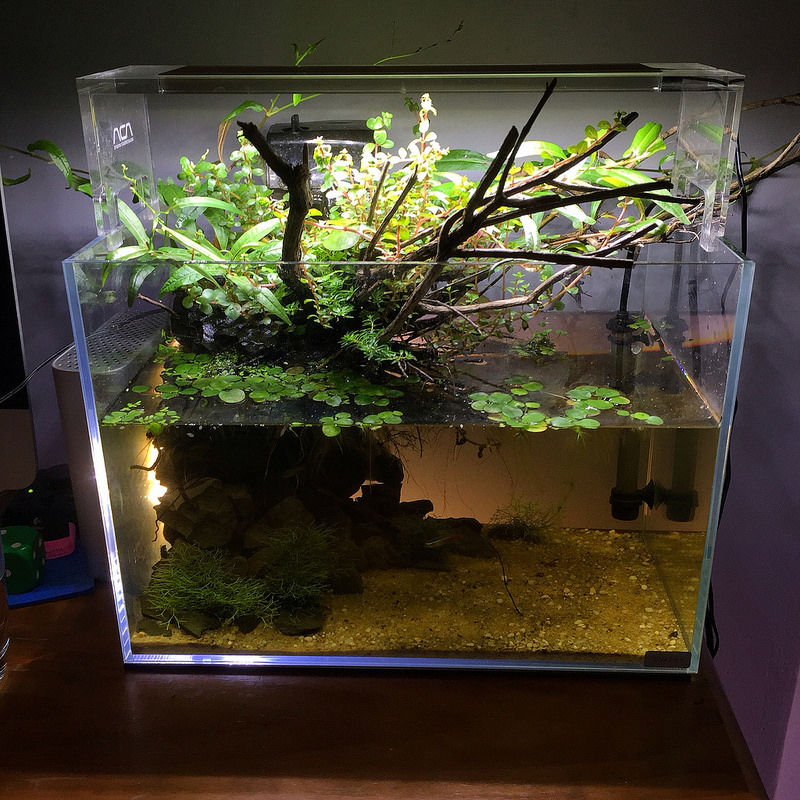 Love the wabi k as well.

Sent from my SM-G920P using Tapatalk

All nice, but that Wabi-Kusa is bang on the money!

nice work! I really like the last one, dark at the bottom bright at the top.

Thank you, Greenfinger. I really got sucked into the wabis. They're great, I just wish our summers were cooler for them. They've definitely done better for me over Autumn and Winter when the air con isn't on 24/7.


Jamie McGrath said:
nice work! I really like the last one, dark at the bottom bright at the top.
Click to expand...

Thank you, Jamie. It was a great little tank, but if I did it again I'd definitely do something more practical. I wouldn't mind trying a proper paludarium in the future. I'm constantly inspired and in awe of the work of Adrian at our ADA Gallery in Melbourne.
http://showcase.aquatic-gardeners.org/2014/show608.html

Sent from my SM-G920P using Tapatalk
Click to expand...

Thank you, Chris.
Daniel
1. Current Tank and Other Goodies

Removed the longest piece of wood from the tank and replaced it with a shorter piece. I was liking it less and less since adding the terrestrial stuff. Before then I liked it, but now the triangle is more accentuated. Since removing that I've also created a void that something will need to be planted in. I'm thinking perhaps some sort of rotala or ludwigia, or perhaps I'll just carry the persicaria across—this probably makes the most sense.

Staurogyne looks a little rough, but I've just hacked it back quite a lot. Contemplating adding some monte carlo amongst it. There are floaters (off-cuts) from the wood that have lodged themselves in the carpet, but not enough to really take off and compete with it.

I've also been tinkering with the emersed sticks. Added some finer branches (which look a lot nicer in person) and mossed up the back left branch. Added some usnea too. I stumbled across a lot of it the other day when out with the pup and took a little bit. Not sure how well it will do, but it seems to be okay so far. 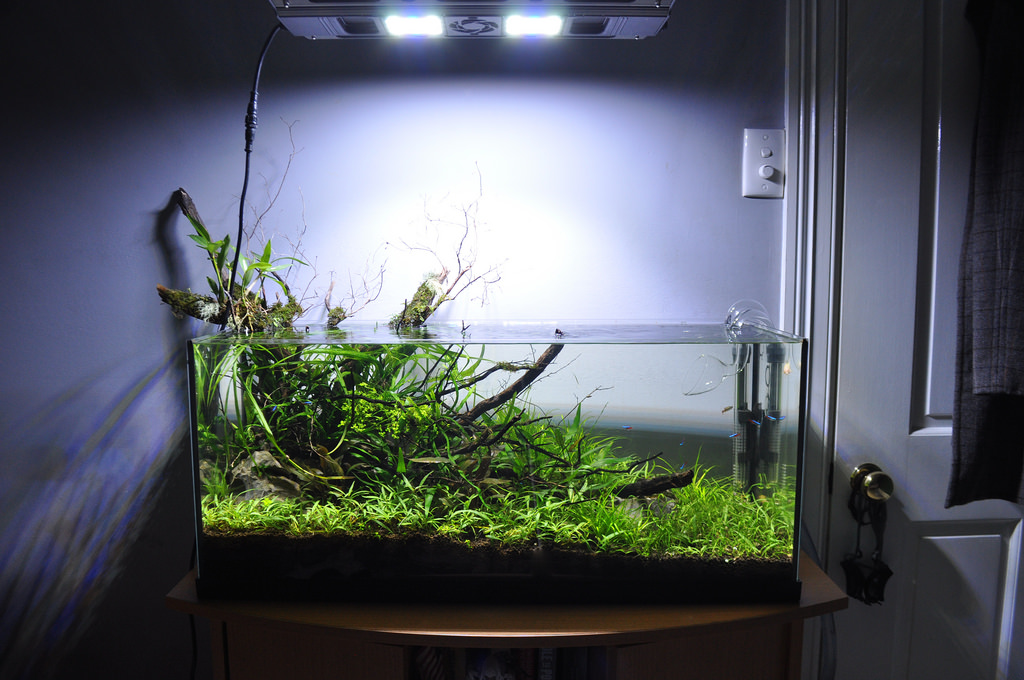 Since last time, my tank hasn't really changed much. I did end up adding some monte carlo amongst the staurogyne (waiting for it take off), and also added some hydrocotyle tripartita. The cyperus helferi has produced a flower a stalk and is now growing emergent. All fish seem to be doing well, especially as the plants grow in more and more. I think the corydoras have liked it the most though, I've noticed at least one little fry swimming around!

What really excites me though, is how well my orchids are doing! Despite the fact the original plants taken from our backyard were rather dry and beat up from the Australian sun, they seem quite happy where they are now. I've started to see lots of new root growth and leaves. The terrestrial moss has started adapting to the higher moisture content too. 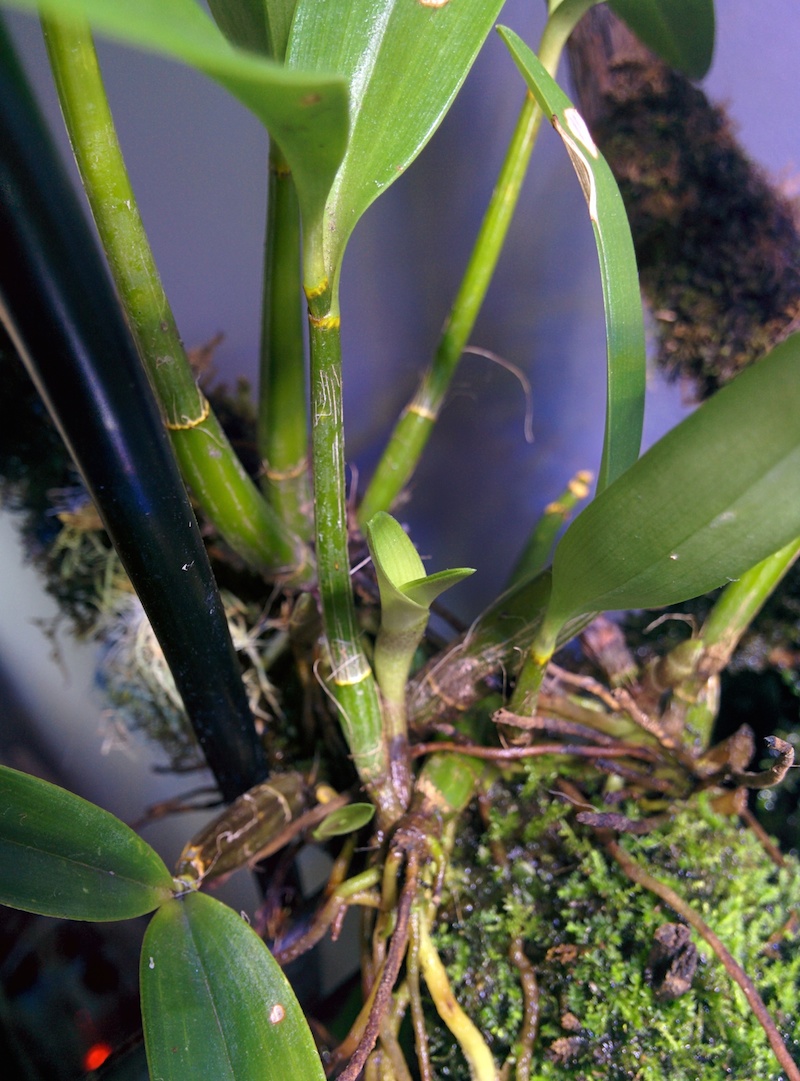 And the wabi on my desk is still going strong too. I had a few problems with it drying out even with regular misting, but it has started to bounce back now that I'm saturating the substrate twice a week. 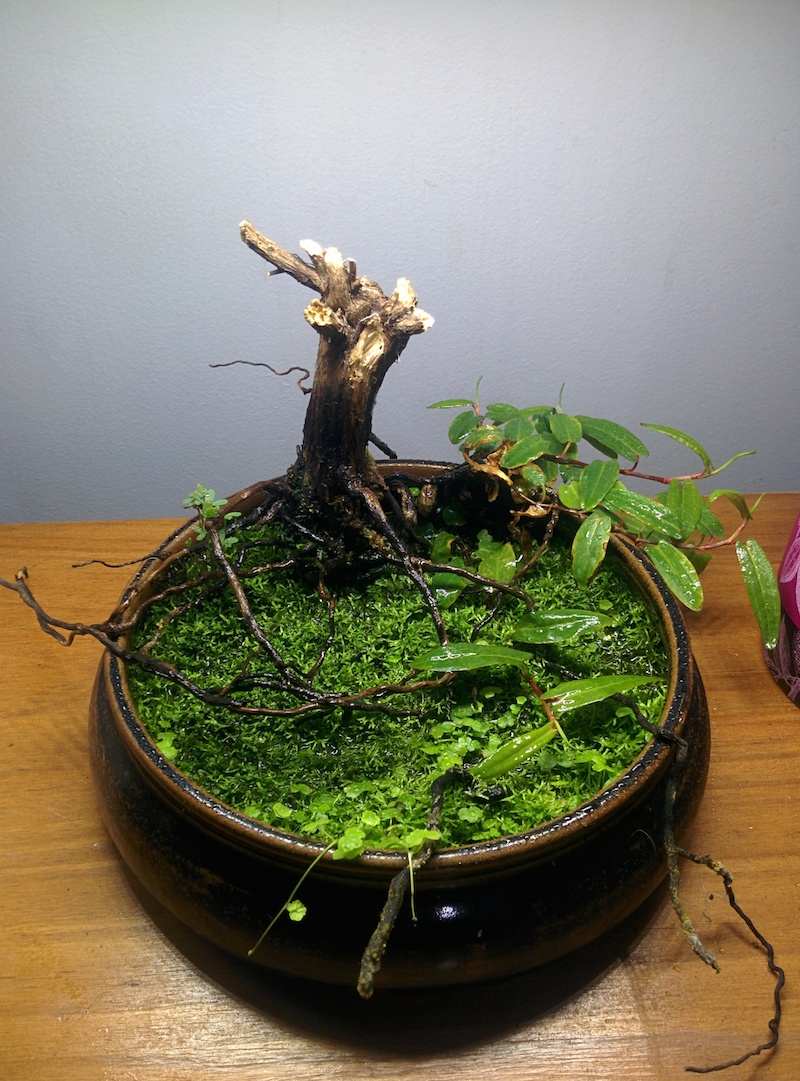 Last edited: 5 May 2016
Daniel
1. Current Tank and Other Goodies

Just a quick phone snap. It's starting to fill in more and more. Hopefully in another month or two the foreground species I added will be properly intermingled and wild. 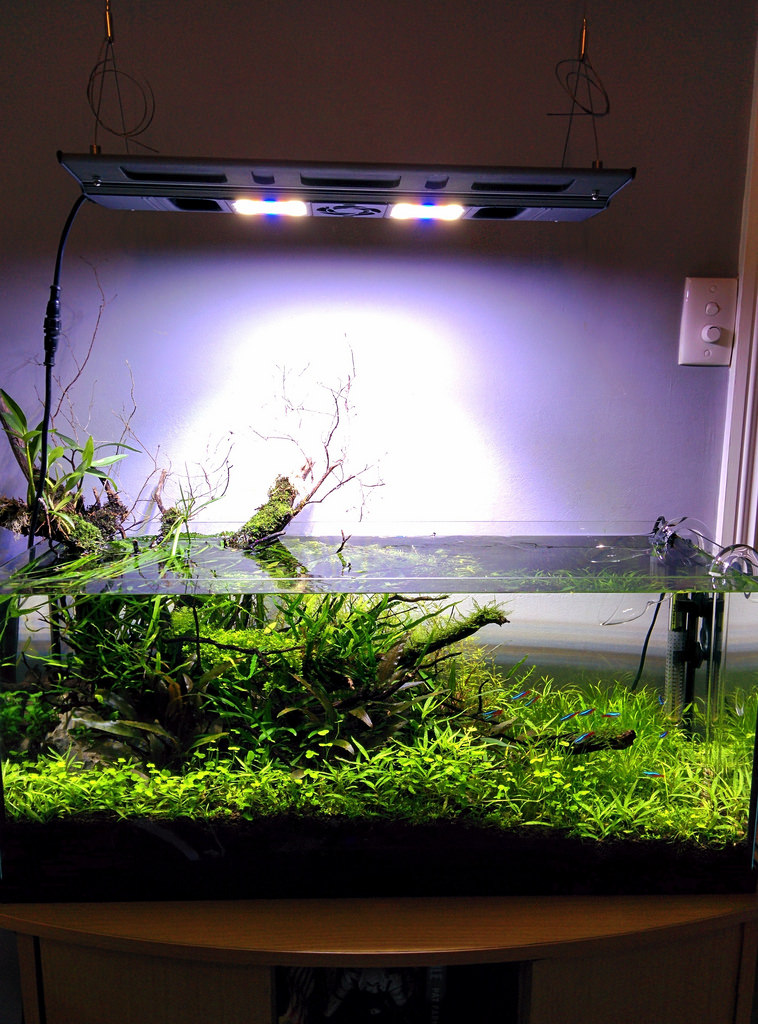 Daniel
1. Current Tank and Other Goodies

Wow , what a nice green you have in there.
Very wild , i lke it!
My Aquariums

All looking very nice...
.
Aquazeitgeist. YouTube
A Brief and Incomplete History of Aquascaping. Soil Substrate Planted Tank - A How to Guide
Schism Reimagined. NatureScape. Return of the Shallow. Windswept Eternity, Primordial. The Dark Side or What Lurks Beneath


BBogdan said:
Wow , what a nice green you have in there.
Very wild , i lke it!
Click to expand...

Indeed. The fish are really loving it.

Thanks, Tim.
Daniel
1. Current Tank and Other Goodies

Will post some photos hopefully tomorrow. The tank and tree stump wabi are coming along nicely. I've also started another wabi, which will get its own thread at some point.
Daniel
1. Current Tank and Other Goodies

Long time no post—I do apologise. Here is a quick phone snap of how it is looking today. Not sure how well the anthuriums will tolerate the wet feet in the long run, but I'll just rehome them if they start to show signs of being unhappy. There are still some stems in the back behind the java (recently hacked back), although I'm more than likely going to replace them with eleocharis geniculata. 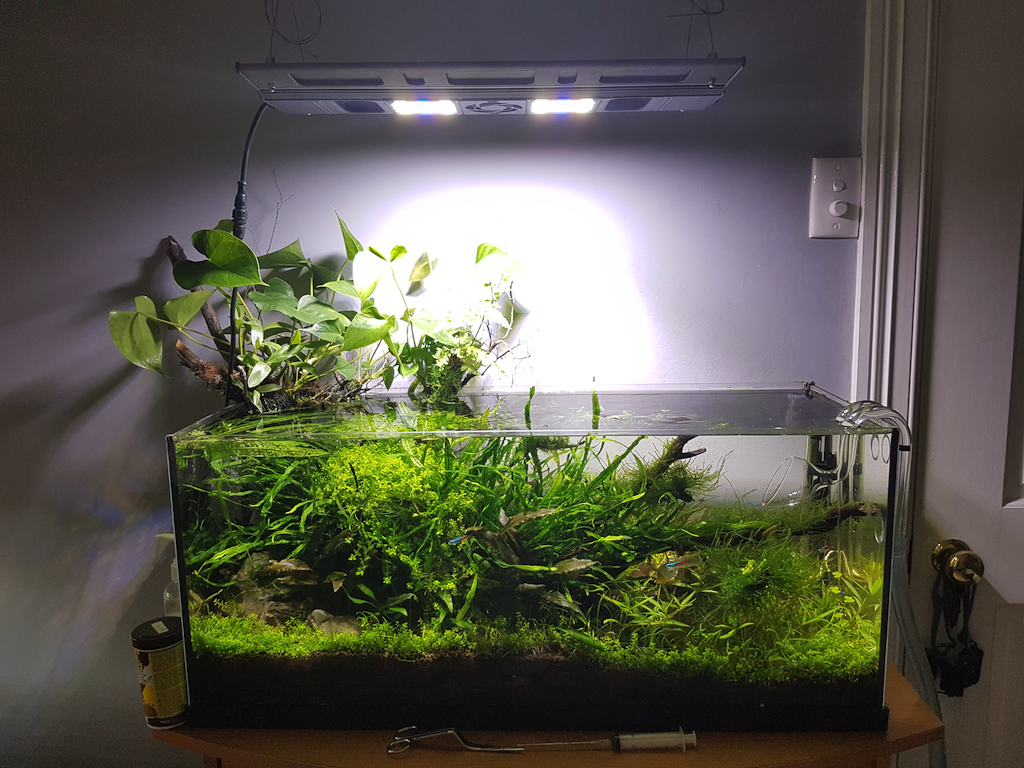 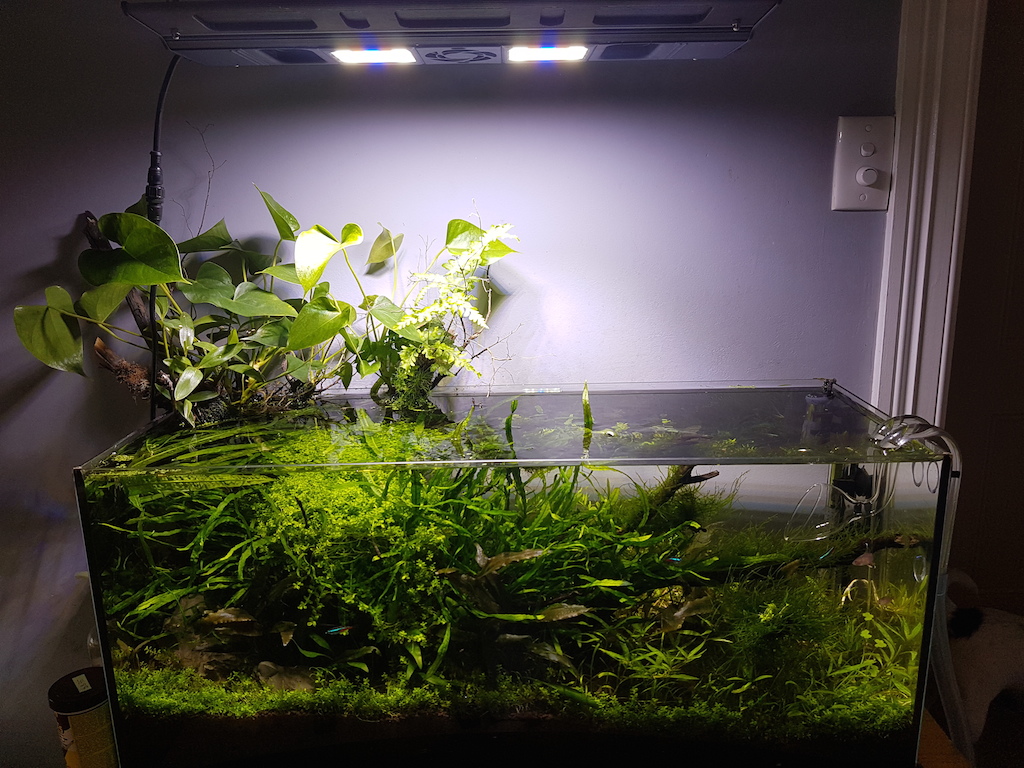 Thanks, Tim.
Daniel
1. Current Tank and Other Goodies
You must log in or register to reply here.
Similar threads