I've had this tank in the garage for ages after I bought it off Mark (Saintly) and have only just got round to (start) setting it up for various reasons.

I've decided to go low tech on it due to the hassle of water changes, and because I love crypts and anubias I don't really need to go high light etc.
So I'm just using the standard lighting (2x38W T8) with reflectors.
I've got a JBL Cristal Profi e1500 filter and will also run my Eheim 2224 on it once I break down my existing tank and transfer the fish across.
Plants will be Crypts (many & varied) and anubias (v.nana, bonsai, coffefolia and congensis) I'll also probably tie some mosses onto the wood going forward.
I wont be adding CO2 (I'm hoping to concvince my wife to let me run a small high tech tank as well in the near future so that all the gear I've bought over the last year doesn't just sit there getting dusty ). But I may add liquid carbon and ferts once its running properly.

For the substrate I've got a base layer over the entire tank of Tropica substrate, topped with zambezi sand on the right and along the front. Then there's a mound of ADA Africana on the left.
I've banked in the ADA using Dragon stone from TGM and the wood is Manzanita wood from Fishandturtlejunkie on APC.

I've only taken a couple of snaps with my phone so far (so apologies for the quality) but I think you can get the idea: 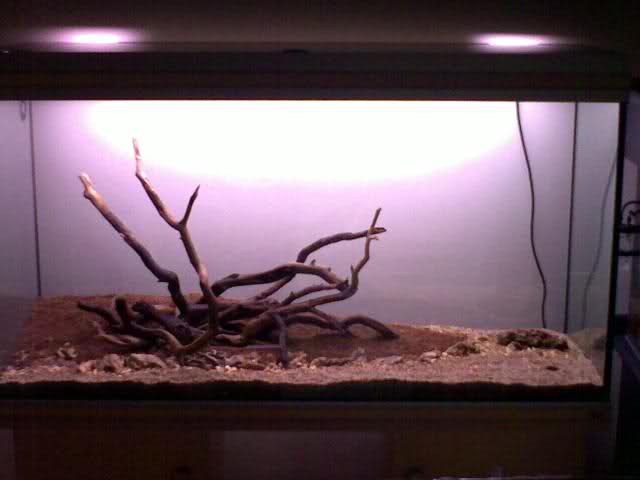 This angle demonstrates the space in the centre of the wood that I'm hoping to fill with either an XL fern or anubias: 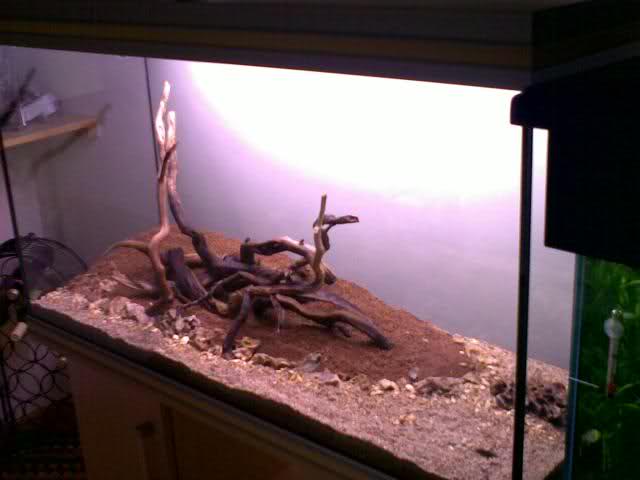 Wow, I love it! I love the planting plans, the low light/tech/maintenance, the natural wood structure, everything! Keep us posted - I look forward to seeing this progress.
Thomas McMillan | Lianko 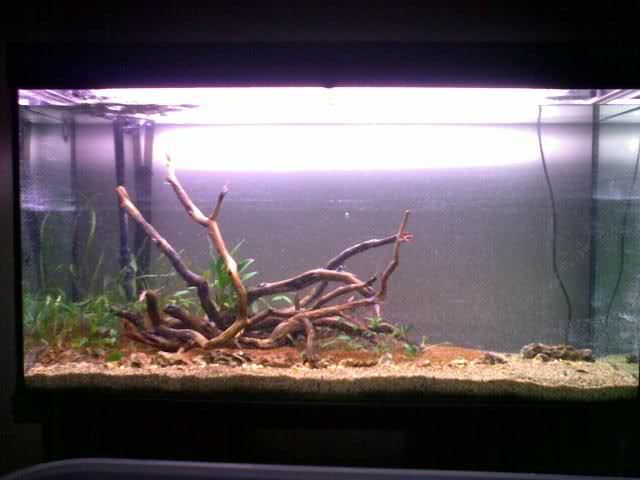 There's Balansae at the back with Undulatus green and brown, Moelmahni & Bullosa in front of it ,Wendtii green and Becketii on the left with Wendtii brown on the right at the back and Nevellii in front of that. There's an Anubias Congensis at the back of the wood.
I've got some more crypts on the way mainly for the foreground - haven't decided on what to put in the centre of the wood yet, though I'm swaying towards an XL anubias nana? I think a Fern would have too much height/be too dominant, the height should be provided by the crypts and the congensis.

I've got a load of anubias bonsai to attach to the wood but I've run out of energy now so will do that tomorrow.
Cheers,

that must look impressive in reality, knowing how big the tank is in real life.
U

I managed to find my camera and after trying all the settings and a bit of fiddling in photoshop came up with a half decent (for me) picture. Excuse the air bubble's all over the glass

Thats a really nice layout Dan And it'll get better as it grows - particularly like the little anubias on the branches.

Very pretty layout Dan. I like the wood arrangement a lot. It's always nice to see another Crypt keeper in the group.

I love my 36g crypt/anubia tank. So easy to take care of.

Looking forward to seeing the tank mature over the long term.

Really Like the use of the wood, very eye catching
Meander, Titans, Ram Bam, Nano Pond, Sea of Ferns
Experimentation is the key to growth - Pardeep