Hi everyone, after a wait of about 3 months i had all the bits together to set up my new tank so "i got the boys round". Graeme, George and Jeremy came round to mine for the weekend and we had a weekend of drunken scaping and i think you'll agree that scaping whist drunk actually produced some pretty nice results? 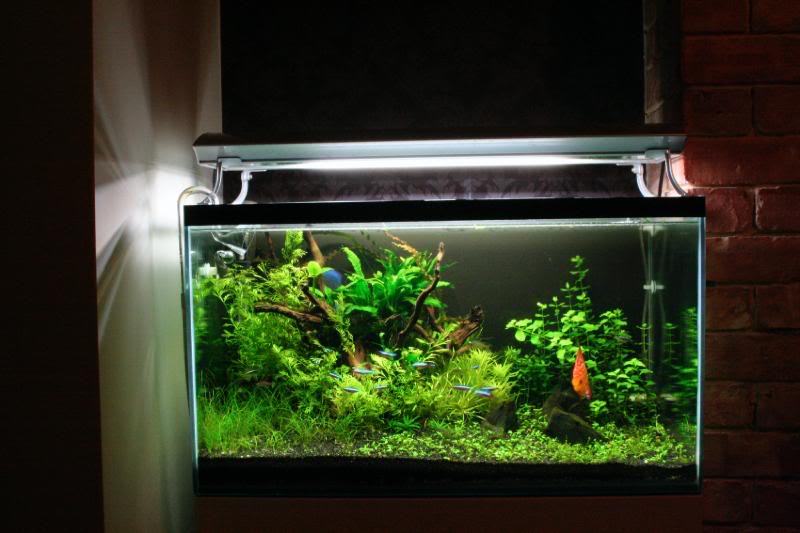 the ludwigia on the right is to be removed and the indian fern on the left will be pruned, it's just there till the tank matures a bit. 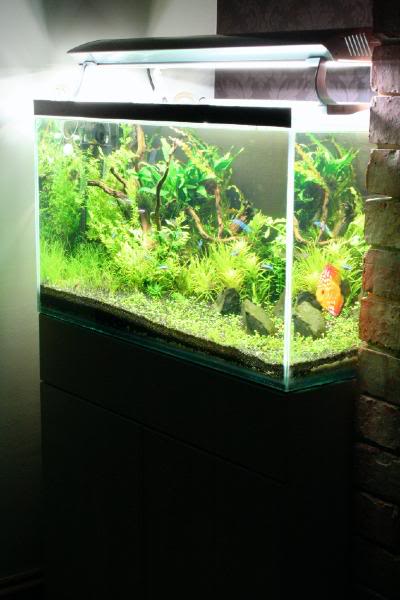 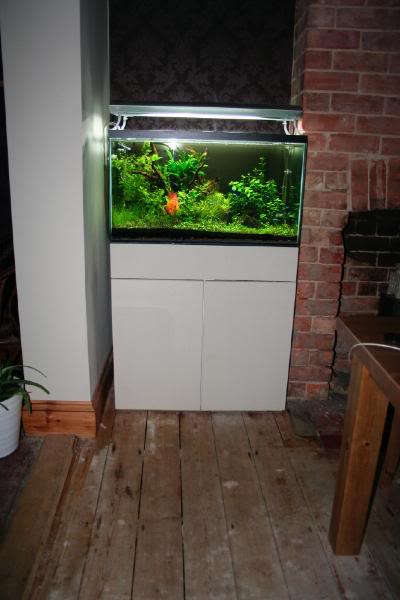 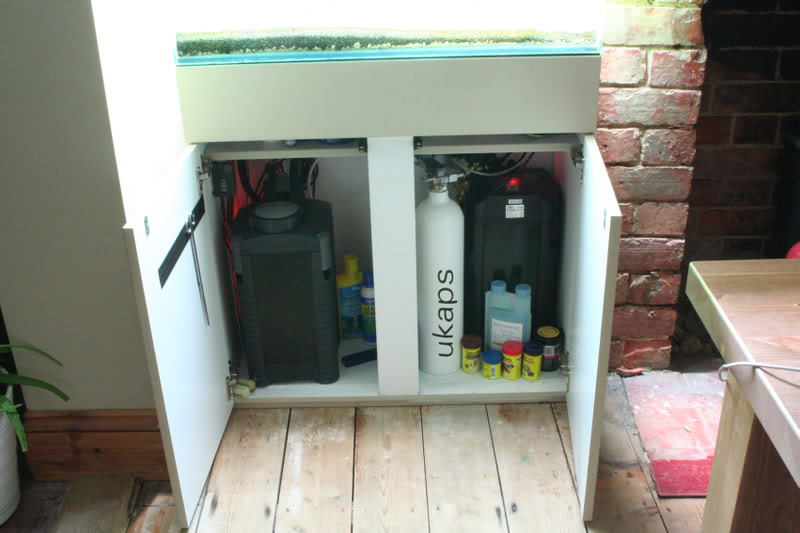 Custom built ADA style stand @ 800 x 700 x 450mm. The stand has two 30mm holes drilled in the left side to allow for filter pipes and it also has 7 holes in the back to allow for power leads etc. The shelf also has seven holes located bellow the corresponding holes in the back of the stand. I have built in a false back to the stand which allows for all cables to be neatly hidden away. The stand is built from 12mm MDF which has been sealed and primed before 3 coats of Dulux Corset coloured matt paint was applied (to mach the walls in the house) The inside of the tank has been painted white then the 3 sides and base have been covered in Fomex (a type of plastic board) and sealed with silicone so any leaks souldnt effect the stand's rigidity. Magnetic push latches hold the doors closed and a simple soft push opens it up. A clear self adhesive vinyl pattern has been applied to add "my touch" to a shameless ADA rip off. 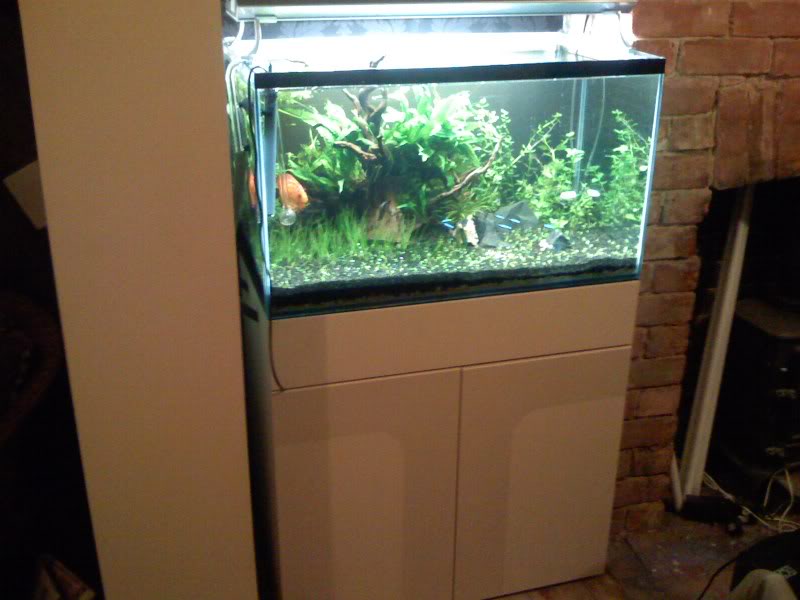 Co2 is added via a sexy UKaps fire extinguisher which was sprayed with a layer of primer, two layers of white, white vinyl UKaps added to create and embossed effect, two more layers of white then the black UKaps was added followed by three layers of clear lacquer. 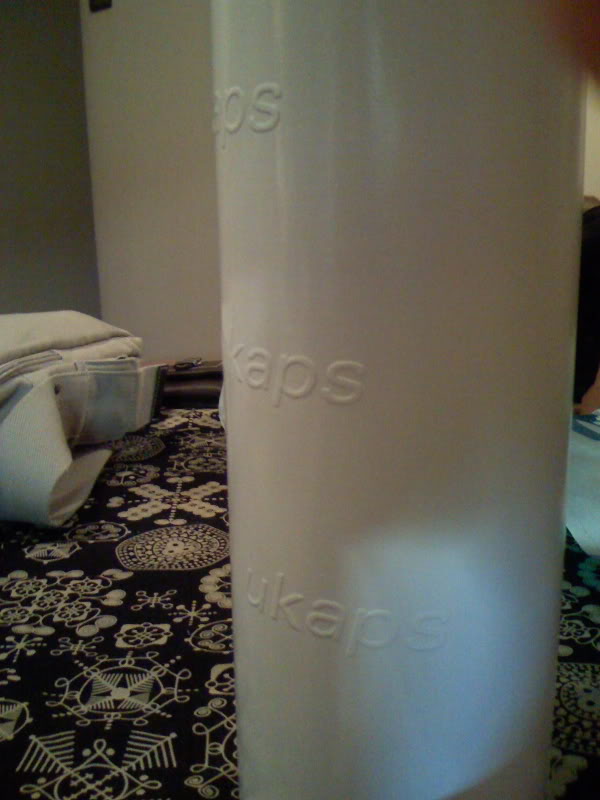 The regulator is a reg and solanoid package from aquaticmagic which hasn't been the best purchase that i have made but i suppose it could be worse.
The diffuser is a rhinox 2000 and i've got my Co2 set to 2bps.

The filtration is an eheim external pro II and a JBL crystalprofi leading to a set of lilly pipes.

The heater is a Visitherm 150w.

The substrate is 20mm of Tropica substrate covered by 20mm - 70mm of black Unipac gravel.

The wood is Unipac Sumatra Wood.

The rocks are Unipac Black Agate.

I dose 5ml of TPN+ everyday.

I think thats about it folks. I hope you like it.

A huge thanks must go to Jeremy, George and Graeme since without them this tank wouldn't be nearly as good. And another huge thanks to George for all the freebees!

Fantastic setup. I especially like your cabinet. The fire extinguisher is pretty cool as well. Looking forward to see how the scape develops

Nice looking tank and very interesting and informative post - I like your setup - UKAPS state of the art I think, especially the CO2 cylinder which brings designer cool to a place I never thought I'd see it!

Did you make your stand yourself? If so I would be very interested to see more detail since i need one the same size and look right down to the push to open doors. Custom prices are not cheap, DIY is tempting...
---
Ray
Always learning ... [Active] 10l nano DSM See my 200L 90cm tank journal... See the rescape of that 90cm

Thanks for the comments.

Did you make your stand yourself?
Click to expand...

I had a friend make it, he's a chippy for an exhibition company and very talented. I'm trying to blag him into making them for people like yourselves but he recons he's too busy but i'm gonna keep on his case.

I had a friend make it, he's a chippy for an exhibition company and very talented.
Click to expand...

Could he/you provide back of an envelope plans and detailed specification of materials used?
---
Ray
Always learning ... [Active] 10l nano DSM See my 200L 90cm tank journal... See the rescape of that 90cm

It looks great Dan. You`ve certainly stepped up a level or two with your aquascaping.

May I be the first to criticise your choice of Discus for this aquascape.

I am interested in seeing how quickly you fill the foreground (Glosso?).

The discus, yeh i know. I had them in my last tank, they breed and i didn't really want to get rid of them. I can see them going soon.

The carpet was originally HC and i never had any luck with it, it just never grew, it lived but whent know where so i've just added a shed load of glosso out of George's 80cm and that is rockin. I'm only intending to fill 60% of the right substrate and leave the left 30/40% hairgrass. I just wanna see if i can get it to look right really. Mix um both up a bit and get a nice transition between the two if you know what i mean?

Glad to see this posted, Dan.

Now we need Graeme with his input...

So lovely looking!!! Young Tom has also built a few tanks in that style, although he has sprayed his gray/silver.

Here are some shots i took last night, i'm still trying to figure out my dam camera!
You can see the glosso growth too and the shape that i'm trying to create. 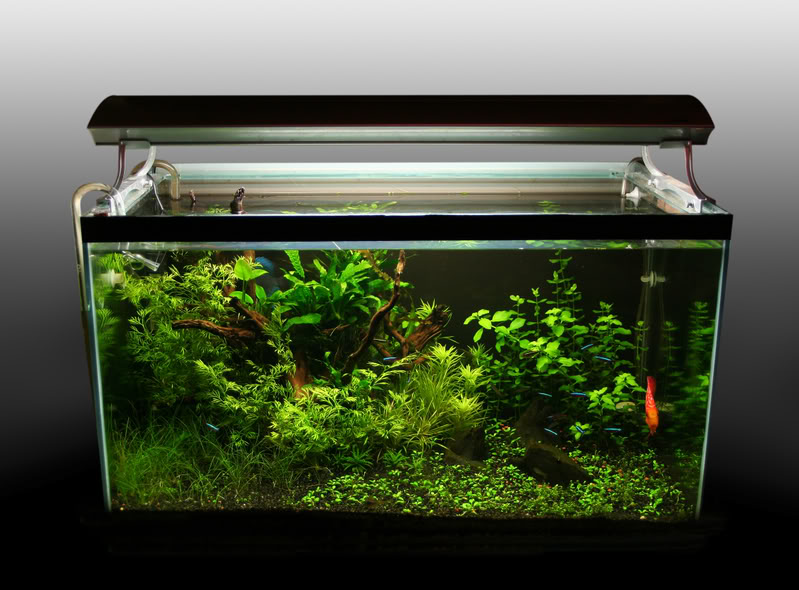 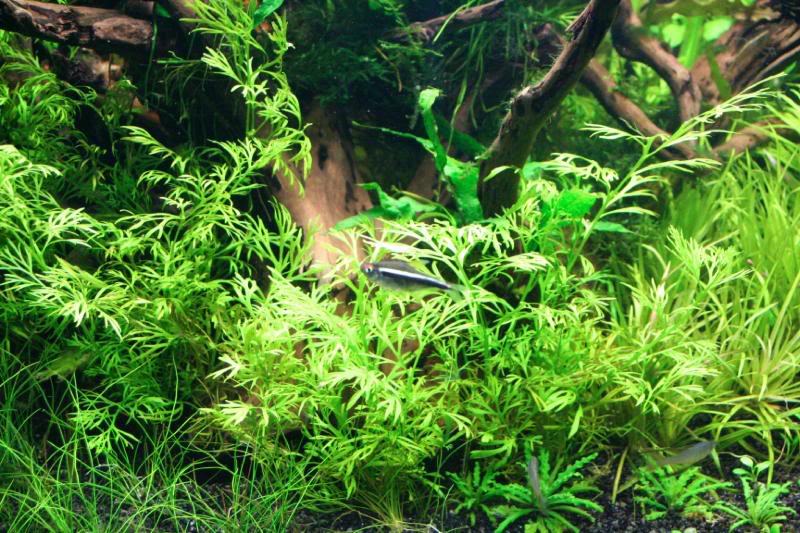 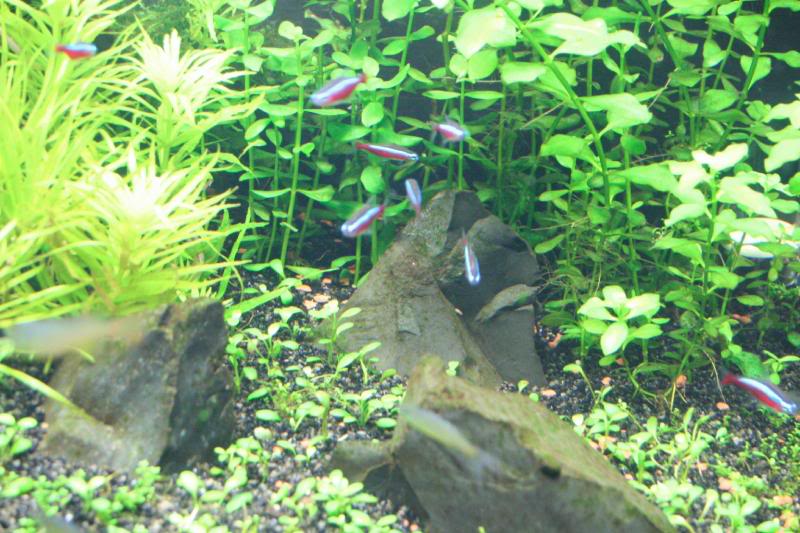 The 'scape is looking really nice as well.

What camera have you got, Dan?

The first shot is pretty good, but could with some subtle use of the unsharp mask. 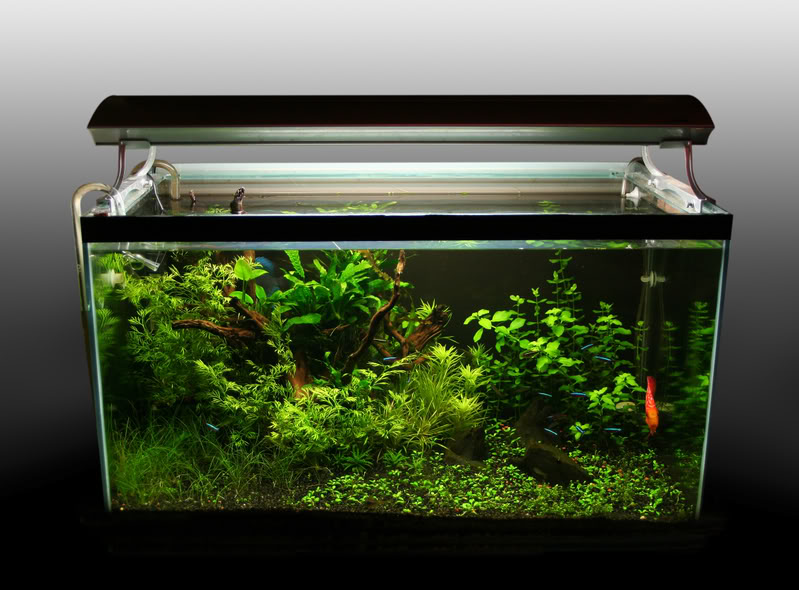 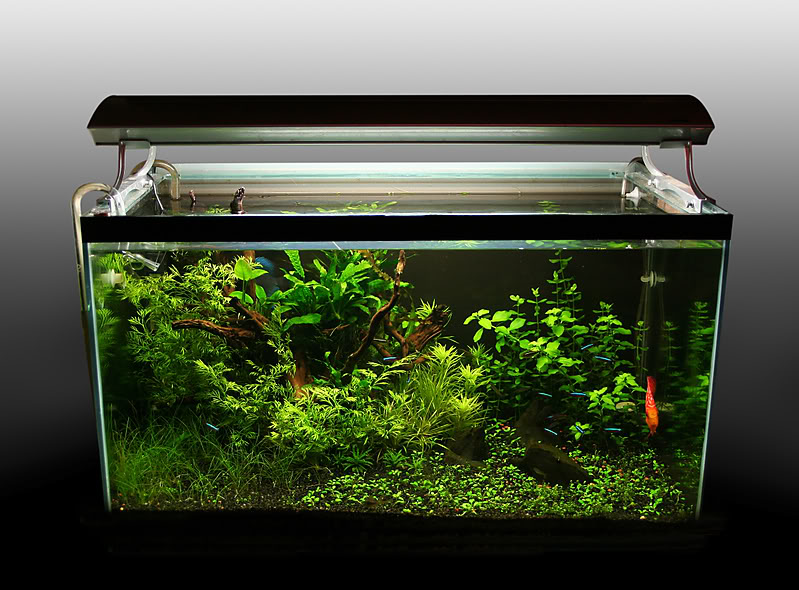 The second, and third in particular, are over exposed. If you have exposure compensation, take it down a step or three to let less light in. You will get better colour saturation and less burn out. Burnt out areas is lost detail that can`t be recovered.

If I remember correctly, you are a Photoshop guru, so don`t hesitate to tell me to shut it! :?

Thanks for the camera advise Dave, I could sort it out in PS but it's kinda preventing me from learning how to use my camera properly, it's a Eos 350d.
Thanks again for your advise.

nice looking tank
your a very brave? man having discus in an open topped tank though, I would hate to wake up one morning to find one of mine on the floor after it had spooked it self during the night.
growing algae since 1982

you could but discus are not just any fish
in the years that I have kept them I have had several attempt to jump, and know of many fishkeepers who have found their pride and joy on the carpet in the morning following something disturbing them whilst they are roosting.
I keep several open topped planted tanks here but my discus and altum tanks are fited with coverglass to prevent me loosing any.
growing algae since 1982
T

Very nice Dan, you can see Graeme's and George's influence in the scpe

BTW you only dosing TNP+, noting else? Whats the water change requirement when you do that?

Themuleous said:
Very nice Dan, you can see Graeme's and George's influence in the scpe

BTW you only dosing TNP+, noting else? Whats the water change requirement when you do that?

Actually Sam, the 'scape does little to represent anyone elses work but Dan's.

It's very different indeed from the layout we put together as a group. It's even better.

So top marks to Dan, and Dan only.
You must log in or register to reply here.
Similar threads