Diary of a Rather Large Tank

LondonDragon said:
Now that is a lot of wood, looking pretty good, can't wait to see it planted, you are going to need a loooooooot of plants
Click to expand...

I must admit that I am a bit concerned about the amount of plants I need to buy,I know that the only way to help to combat algae is by planting heavily from the start but i have no idea how many plants to start with and whether I need to concentrate on stem plants that grow fast or whether I can set up with the swords/crypts/lilies etc that I want eventually.

I'm also unsure about what types to buy for the background in view of the height of the tank,I want plants that will grow tall without looking stringy,the only types I know are onion plants and giant vallis.

I'd be very appreciative of any advice folks :?

Many of the swords grow too big for most tanks eventually and Aponogeton ulvaceous(sp?) as well. Crypts like C.balansae trail across the top in 'normal' tanks. It's rare that people have the space to grow these plants to their full potential and usually dump them when they get too big.

Go slowly and make sure you do those daily 50% water changes and it'll be fine....

beeky said:
Go slowly and make sure you do those daily 50% water changes and it'll be fine....
Click to expand...

jayne said:
...I must admit that I am a bit concerned about the amount of plants I need to buy, I know that the only way to help to combat algae is by planting heavily from the start...
Click to expand...

jayne,
Combating algae is much more than about having xyz number of plants. It's better to take a "holistic" view of a tank so that we can see it from an ecological and environmental standpoint. Having lots of plants does not in and of itself prevent algae, but is a significant element in a system, or approach which helps to establish and stabilize the tank's ecology. Too many people look at a tank and see only it's size or only it's plants or only the fish. Few people ever consider the real workhorse of a planted tank which are the bacterial colonies. The same biology at work in a small tank is also at work in a big tank. The trick is to think about how to efficiently accomplish the ecology for the tank.

Your question regarding number of plants was addressed in this thread=> viewtopic.php?f=3&t=1612&p=16764#p16764" onclick="window.open(this.href);return false; which, for the number of plants you get is a bargain. You can fill in the key spaces by purchasing additional specimen plants and you can decorate the wood by tying ferns and large anubias to it. The only way to avoid the stringy look of stem plants is to prune them frequently which will make their stems thicken and become more robust.

But this is only part of the story. One way in which algae is typically triggered is by high light combined with a high or unstable ammonia loading rate in the water column (there are other trigger mechanisms but these two have the highest correlation). In order to reduce the risk therefore you can start the tank with reduced lighting and limited photoperiod.

Ammonia production is combated primarily by bacteria. During tank startup the bacterial populations are low and unstable. Therefore the filter media you start out with should be media you currently have in use. More importantly, the substrate needs to contain bacteria colonies and should be seeded with organic material such as peat, which provides carbohydrates for the bacteria.

I believe you mentioned that you intended to use a so-called enhanced substrate such as Ecocomplete. The organic material in the sediment will provide food for the bacteria and the high quantity of plants will pump oxygen into the substrate enabling the bacteria colony to grow and to oxidize the ammonia. The goal here therefore is to accelerate the growth of the bacterial colonies.

Plants that develop large root structures are significant in that they do a much better job of interaction with the sediment and experiments have shown that the area of sediment surrounding large rooted plants such as Swords and Crypts are better oxygenated than areas having plants with lesser developed root structures. My feeling therefore is that the planting of these types is advantageous, especially in a configuration such as yours where sediment/root interaction is imperative.

The addition of CO2 enhances the plants ability to produce food for the bacteria and to oxygenate the substrate. Plants will also directly remove some of the ammonia from the water column. The more plants, the greater will be this ammonia removal, the higher will be the oxygenation rate and the faster, more stable will be the rise in bacterial population and diversity.

The remaining item is water changes. Although I can appreciate the size of the tank, neither ammonia nor algal spores are sympathetic to your water volume and they will populate the water column to a significant degree. Serious thought should be given to water changes regardless of tank size. Water changes is the single most effective way of algal spore and ammonia removal so the more it is accomplished the better off you will be. There is also no need to use RO water exclusively as tap water will serve the purpose, so the issue of water changes should be at least considered.

Thank you very much for your comprehensive reply,I'm really getting my knickers in a twist about this aspect of the tank - so much that I'd forgotten about my previous post on the plants forum

I've read your reply several times and it all seems to make pefect sense,I'm going to take a 'chill pill' and enjoy the plants as much as the rest of the set up .
A

This is going to be awesome!
Aaron North
My Flickr Account | Equipment needed for setting up an FE | Algae & Nutrients

aaronnorth said:
This is going to be awesome!
Click to expand...

aaronnorth said:
This is going to be awesome!
Click to expand...

You can go off people y'know

jayne said:
...I'm going to take a 'chill pill' and enjoy the plants as much as the rest of the set up .
Click to expand...

Exactly, that's the whole point. If you really like swords then you ought to take a look at the XL size Tropica plants available here (and at other stockists) http://www.aquaessentials.co.uk/index.p ... th=255_290

I would particularly recommend Tropica Echinodorus 'Ozelot' XL. A stunning plant often used as a centerpiece due to it's never ending display of maroon and bronze colored spotted leaves.

Since they are XL to begin with they will establish quicker and you will already have focal points. If you combine these with Ferns tied to the wood you can get a "fuller" look sooner.

this is a really exciting dream project. I want to eventually have a large tank, maybe not quite as big as yours, but I i live in a terracced house and have floor joists....as it is i have two 400 litires inthe living room and sometimes worry about the weight!

Hmmm...maybe i need to find a partner who builds tanks?

Do you have any idea about what fish you will be stocking?

Hats off to you Jayne, a most audacious project!

It might be worth importing your plants directly from Singapore - check out http://www.aquaspotworld.com/ Aquaspot world - he has 26 varieties of crypt and a similar number of swords - you could have a forest of unusual varieties. There is a thread where Ed reviewed them and found them quite good, also they sometimes post sage advice on this forum. Normally the shipping offsets the better prices but in your case it would be spread over so many plants... Whoever you buy from, you should ask for a bulk discount

Personally like Clive said, I'd plant up as you mean to go on and rely on low light to keep algae at bay as things get established.
---
Ray
Always learning ... [Active] 10l nano DSM See my 200L 90cm tank journal... See the rescape of that 90cm

They were good for me, but maybe you might be best to work out a list of what plants you want and see what everyone's got here going spare. I bet you could plant a lot up from other people's clippings. You are certainly welcome to any spare stuff from my tanks.
Ed

The bracing bars are completely dry now so the wooden supports have been taken off.Billy has also siliconed some glass wedges to the floor of the tank to make extra sure the wood can't kick forwards into the glass.
Next will be the substrate 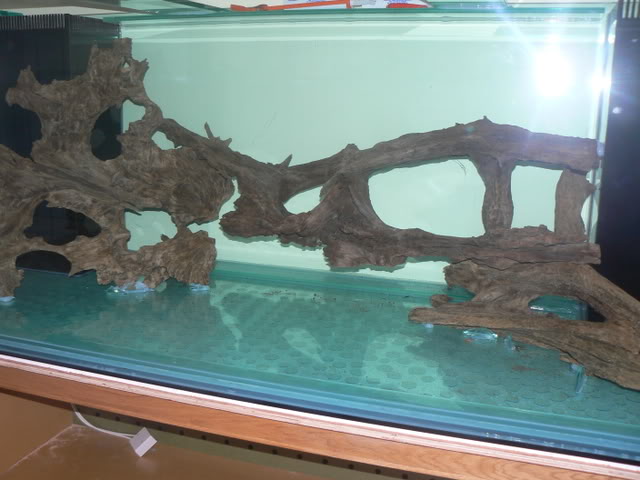 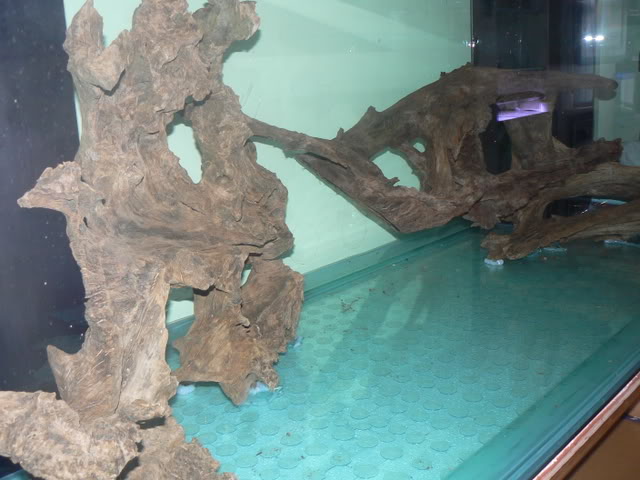 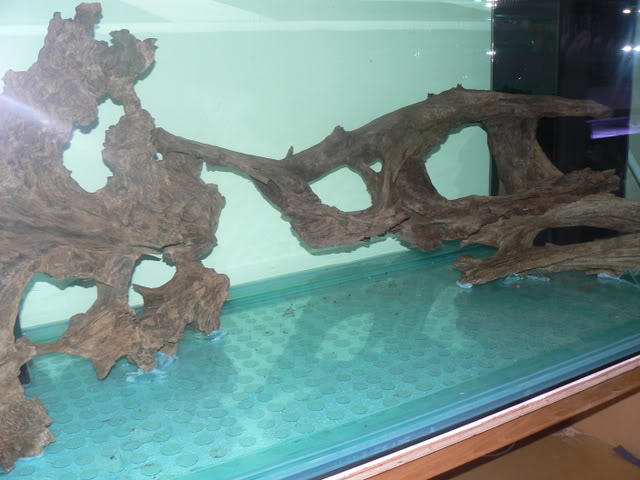 jayne said:
The sump arrived last night and tonight the plumbing should be finished and then it should be all systems go
Click to expand...

Good idea with the silicone for the wood.

This is a deep tank however, plan accordingly. Think about what you are willing to prune and do. The large 50% water change will allow you to prune and work low in the tank without going under water........I'd suggest a venturi mazzei valve for this tank size.

It will mix the CO2 very well.
Also, have the ability to change the light intensity if possible, you have gone this far already, may as well do it right.