I've been fighting the itch to set up a new tank for a long time and now the times come to scratch that itch!

So whats the plan?

Its easy to say, lets see how easy it is to do.

First off Lets order some Glass. 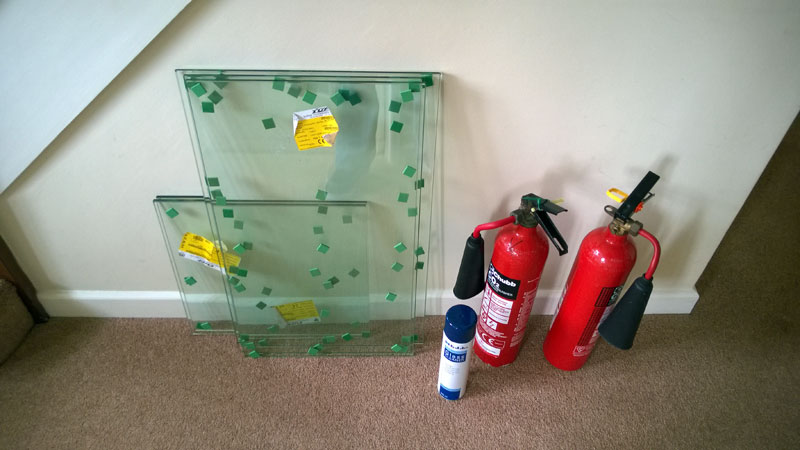 The initial tank build seemed fine, every thing fitted together as it should.
I'm using 10mm beveled float glass.
tank dimensions are 700x450x400 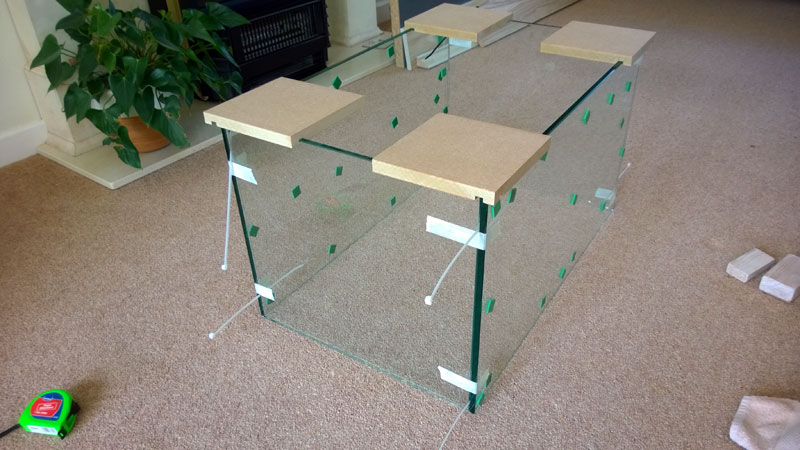 Here you can see the tank all clamped together.
After a lot of research I decided to go for the silicone injection method for building the tank. 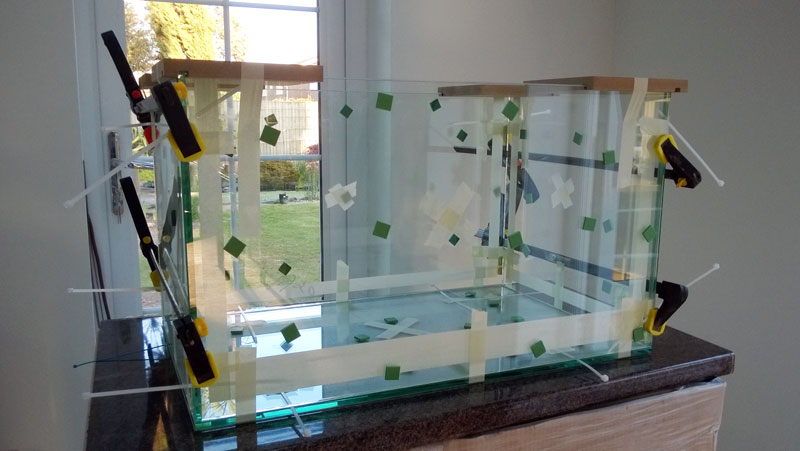 Instead of laying down beads of silicone and setting the glass onto them as with "normal tank building" the injection method involves clamping the tank together as a whole with cable ties inserted between panes to create an equal gap on all joints. 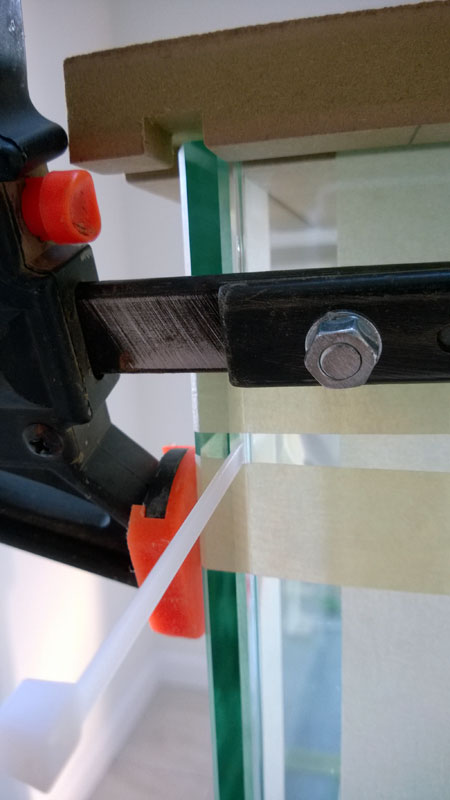 Once the tank was all set up and ready the nozzle for the silicon was squished down with some pliers so it just fits into the gap created by the cable ties. 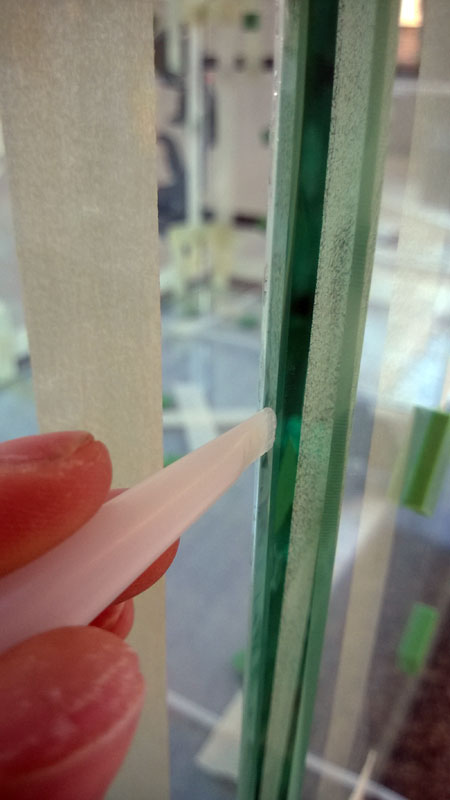 Then small blobs of silicone were injected into the gaps evenly around the entire tank. (Small blobs are not recommended, keep reading to see why) 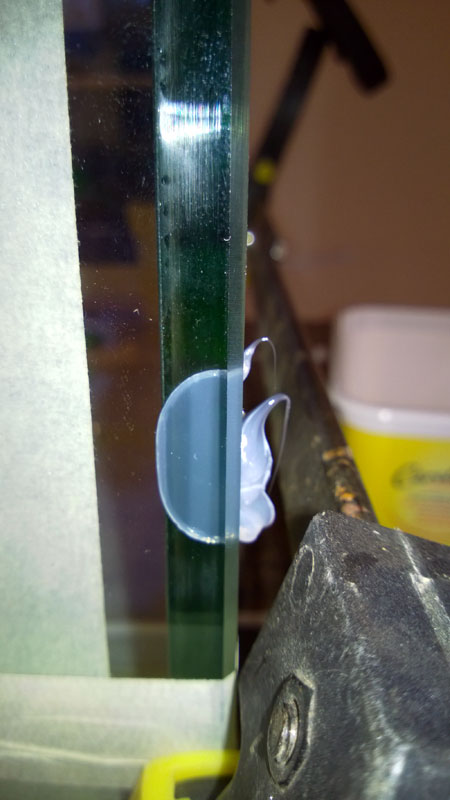 I left the tank over night to wait for the blobs of silicone to cure. 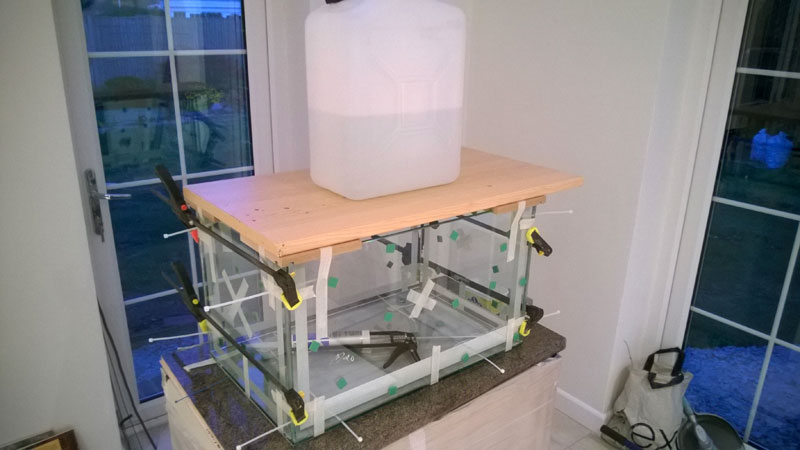 The next day I removed the clamps and cable ties and injected silicone into the rest of the seams. I also siliconned the inside water seal. 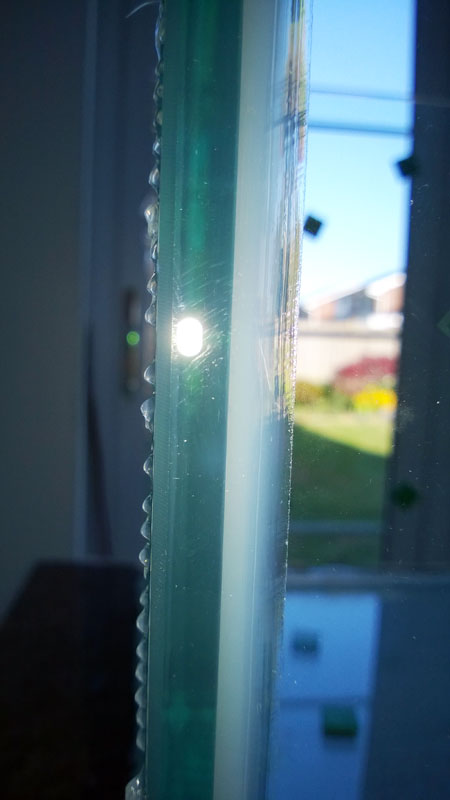 All was looking good and I was about to water test the tank when I discovered this! 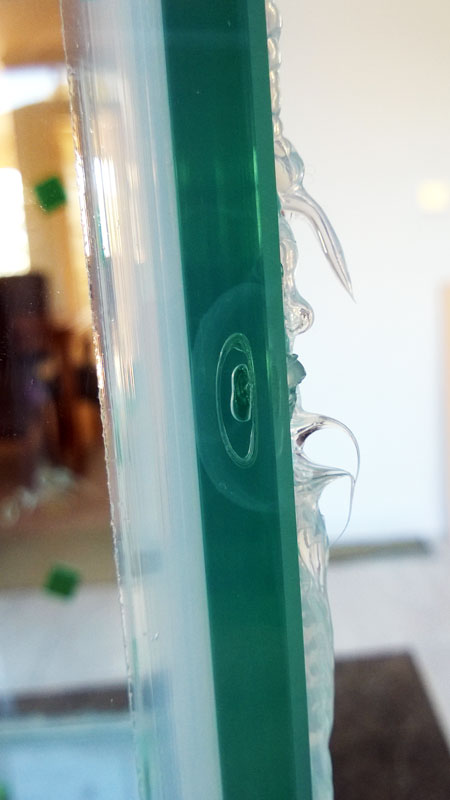 A large bubble had developed inside the initial blob of silicone used to hold the tank together at the start.
This is why I don't recommend using small blobs to initially hold the tank together.
The reason for this is there is not enough strength in the small blobs to hold the panes together if there is any tension on the tank when the clamps are removed. this is why it is critical for the tank to be on a level surface and perfectly square before starting to apply silicone.

I suspect that when I removed the clamps there was some movement in the panes which caused one of the blobs to fail.

So after some advice from this forum the decision was made to take the tank apart and start again.

I don't have any pictures of disassembling or rebuilding the tank unfortunately.

To separate the panes of glass I used some 30lb fishing line tied between two sticks which i used as a kind of saw to cut down between the panes, this worked extremely well and I had the entire tank apart in about 10 minutes.

However it took me the rest of the day to clean all of the silicone off of the glass!
In the end I resorted to using isopropyl alcohol and 0000 grade wire wool to get every last bit of silicone off, this was hard work.

The next day I had the tank all clamped together again and ready for the silicone.

I also waited 10 days before removing the clamps. I was recommended that silicone needs 1 day per 1mm of silicone to dry, as I'm using 10mm glass I had a 10 day wait.

After the 10 days the clamps and cable ties where removed and I injected the small gaps that where left.
Once they had cured I cut away any excess silicone inside the tank with several sharp stanley blades and applied the water seal inside the tank.

Because I'm using clear silicone you can see a bit of an edge in the silicone where the smaller blobs where injected afterwards.
If I were to use black silicone this would not be as visible, however I don't find them too unsightly. 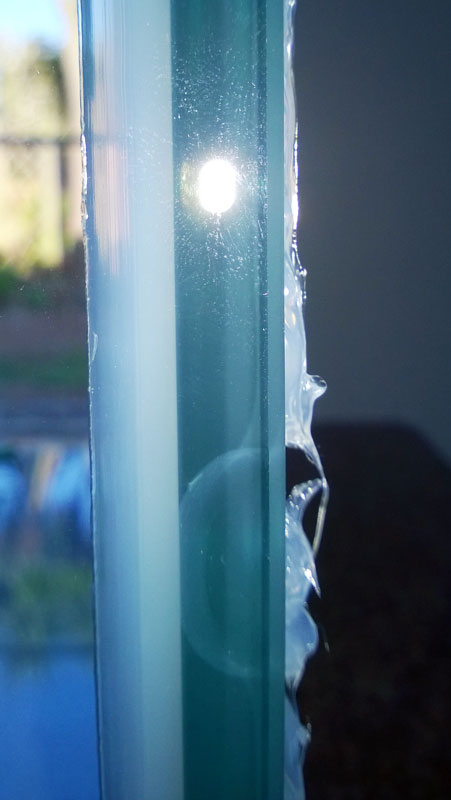 All that's left was to trim the excess silicone from around the out side of the tank and water test it.

Which I did outside 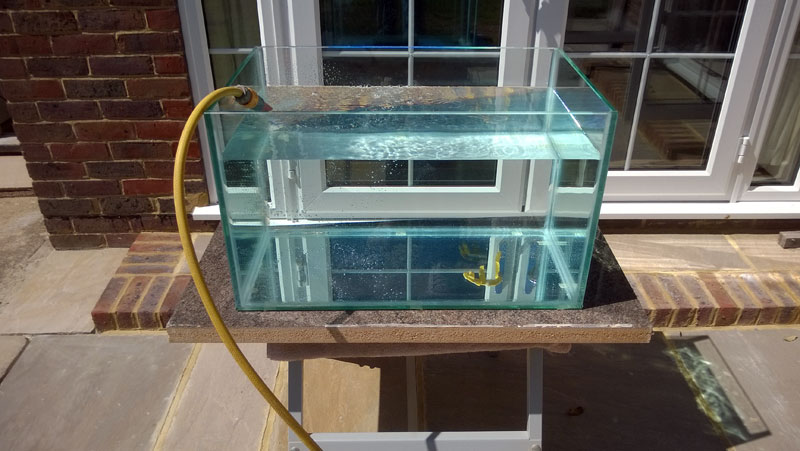 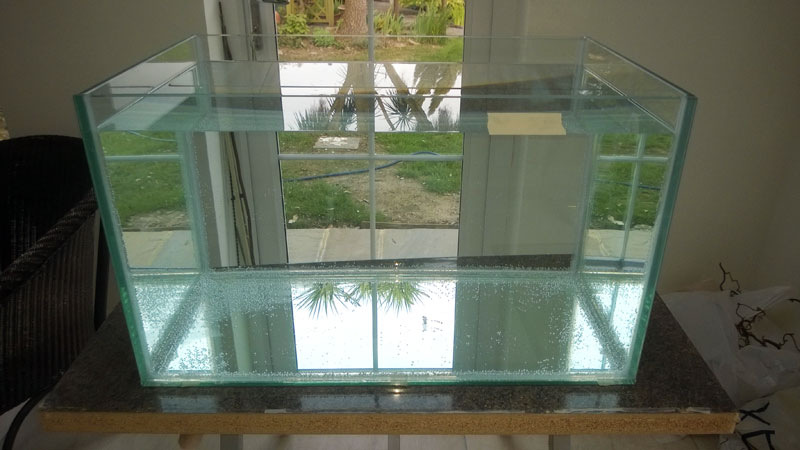 So that was the adventure of part 1 "the tank build"

I'm still undecided on the theme for the tank, I have all the gear for a high tech tank but I'm not sure I have the time or money to devote to it. This tank is a lot smaller than my current tank as I wanted to try and reduce costs however a low tech tank is appealing to me.

Next on the plans is the lighting and them the tank stand.
Hope you're finding it interesting so far
first planted tank journal
Discus Dan's disastrous endeavours in decorative delight | UK Aquatic Plant Society
Complete DIY set up journal
http://www.ukaps.org/forum/threads/discus-dans-complete-diy-set-up.32986/

Fantastic DIY thread so far, thanks for taking the time.

Iain Sutherland said:
Fantastic DIY thread so far, thanks for taking the time.

Wow thanks for sharing this with us. The yank looks grate, now I understand why they cost so much too buy. Im looking forward to the lights section. Tank looks awesome.

So I got some work done on the light box tonight.

I was initially thinking of using some LED flood lights but after seeking more advice from here I decided to go for some GU10 down light fittings and LED bulbs. Hopefully this will give me much more flexibility over LED flood lights.

Pretty straight forward box glued and pinned together with holes cut out for the down lights, a top will cover all the gubbins once they are installed. 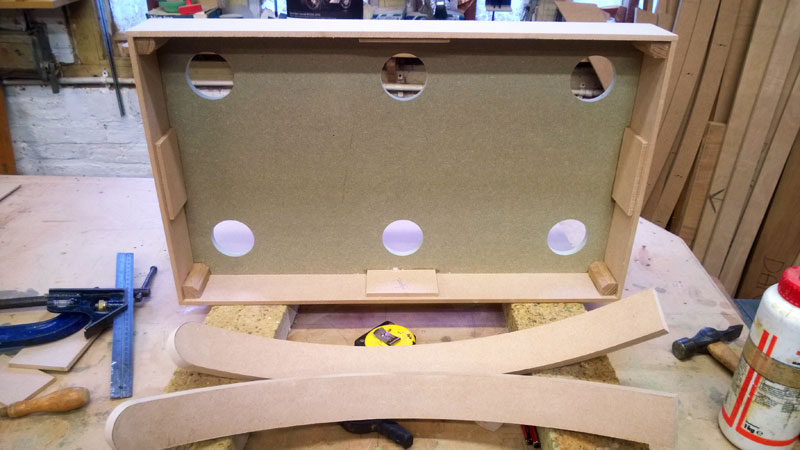 I laminated up some curved arms that the light box will be suspended from. 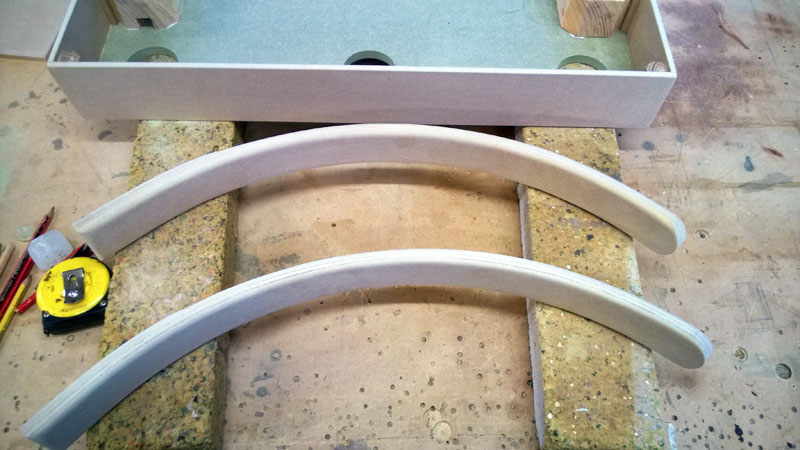 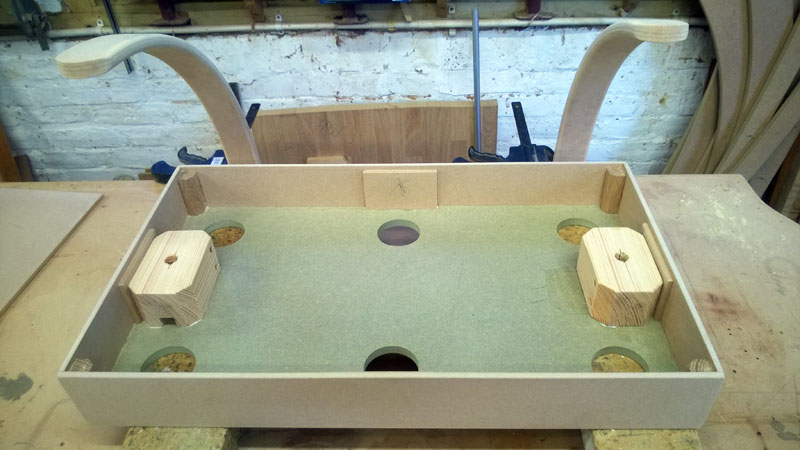 There's still a lot to do, I have brackets to make for the curved arms, aluminium to cut for suspending the box and its all got to be painted.

Fantastic build Dan and one I'm sure you'll be very proud of given you built it all. If you decide you want tiltable gu10 fittings I have loads spare. I have lots of fixed fittings too..

Looking forward to this

ooooh thanks for the offer Alastair, tiltable fittings could work out very well, even more control over the light.

Mine are fixed, but I'll see how they get on first. Still got to decided what wattage LED to get?
first planted tank journal
Discus Dan's disastrous endeavours in decorative delight | UK Aquatic Plant Society
Complete DIY set up journal
http://www.ukaps.org/forum/threads/discus-dans-complete-diy-set-up.32986/

discusdan said:
ooooh thanks for the offer Alastair, tiltable fittings could work out very well, even more control over the light.

Mine are fixed, but I'll see how they get on first. Still got to decided what wattage LED to get?
Click to expand...

If it's low tech your going for it won't really matter too much. I have lots of low energy gu10 bulbs but they are 11watt each. They have a good 120 degree spread.
The majority of the led gu10s have 60degree spread or less so will be more point sourced than anything but there are a quite a number on ebay that sell 5 or 6watt smd leds for 2 pound each with 400lumen and a 120 spread.

Alastair said:
there are a quite a number on ebay that sell 5 or 6watt smd leds for 2 pound each with 400lumen and a 120 spread.
Click to expand...

Cheers for the info Alastair, Do you have a link to the bulbs so I can take a look?

I got a little more done on the light box tonight.

Got the Ally cut and fitted into the curved arms. 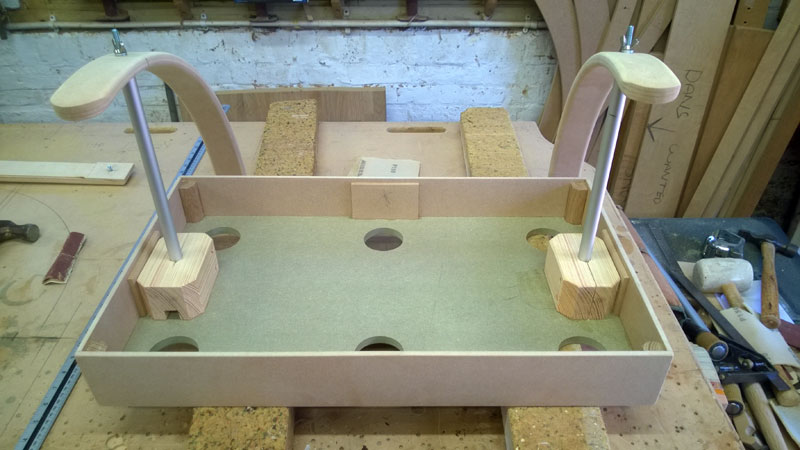 Wing nuts to hold it in place, need to cut the bolts down. 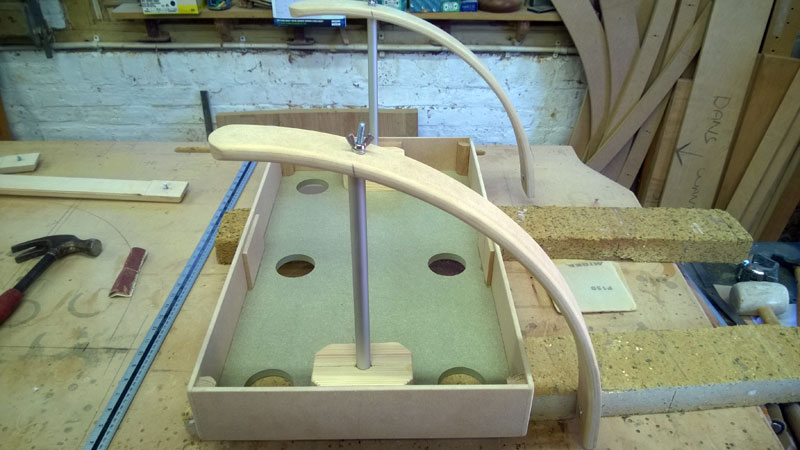 Got the rest of the bracket done for the curved arm too. It will fix to the back of the tank cabinet and have height adjustment via the groove. 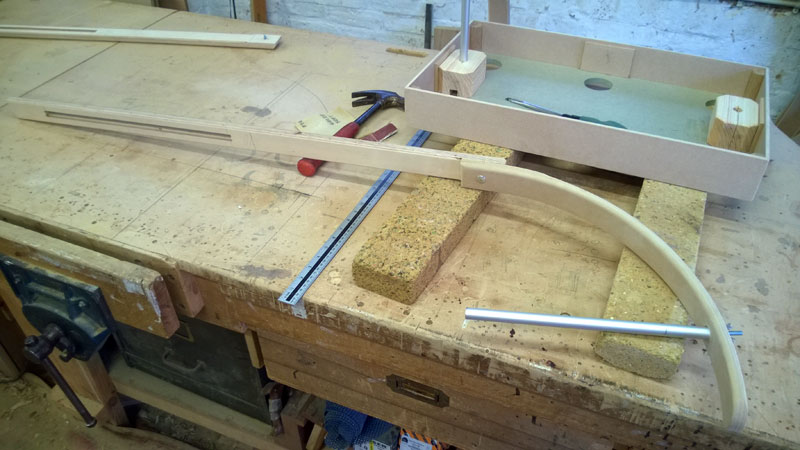 Just got to sort out the top for the light box and give every thing a paint.
first planted tank journal
Discus Dan's disastrous endeavours in decorative delight | UK Aquatic Plant Society
Complete DIY set up journal
http://www.ukaps.org/forum/threads/discus-dans-complete-diy-set-up.32986/

I found gu10 leds didnt give me enough light. I got bright ebay ones from China and they got hot and failed. Still interested to see someone make it work. Great thread

Sent from my GT-I9300 using Tapatalk

Rich_the_gamer said:
I found gu10 leds didnt give me enough light. I got bright ebay ones from China and they got hot and failed. Still interested to see someone make it work. Great thread

Sent from my GT-I9300 using Tapatalk
Click to expand...

It depends on the source and style etc. Never had any fail on me when I used them.

Nice DIY set-up you are having there!
What silicone did you use to make sure the tank stays put? I used sonoplast on one of my aquarium and the silicone is like an elastic.
And how did you make curved arm? They look beautiful!

15w is the highest i can find gu10 led bulbs, which are apparently very bright.

i was planning to use either 9w or 12w led bulbs as they seem the best compromise between price and brightness.

im hoping 6 should be more than enough and if i need to reduce the light intensity i can raise the light box up.
first planted tank journal
Discus Dan's disastrous endeavours in decorative delight | UK Aquatic Plant Society
Complete DIY set up journal
http://www.ukaps.org/forum/threads/discus-dans-complete-diy-set-up.32986/

Managed to finish off the light box this evening.

Cramped the legs in my vice to see how it all looked. 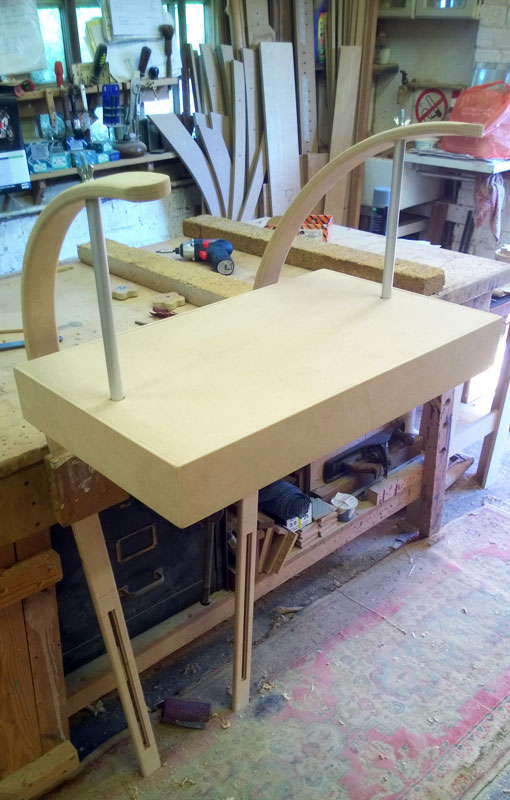 Top of the box fitted, still got to cut them bolts down 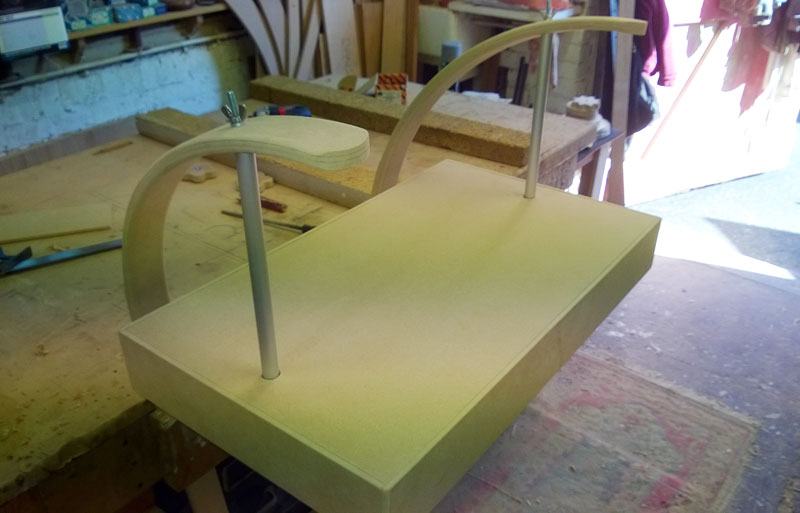 Also made some knobs which will lock the arms in place when fitted to the cabinet. 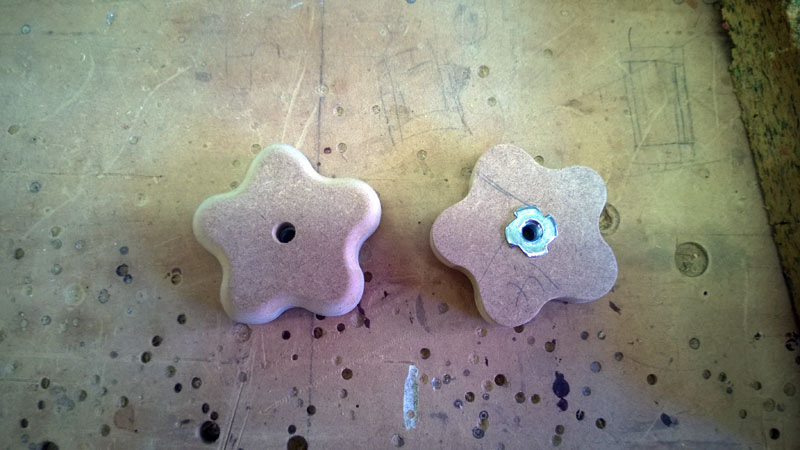 And finally gave every thing a dust coat of primer. 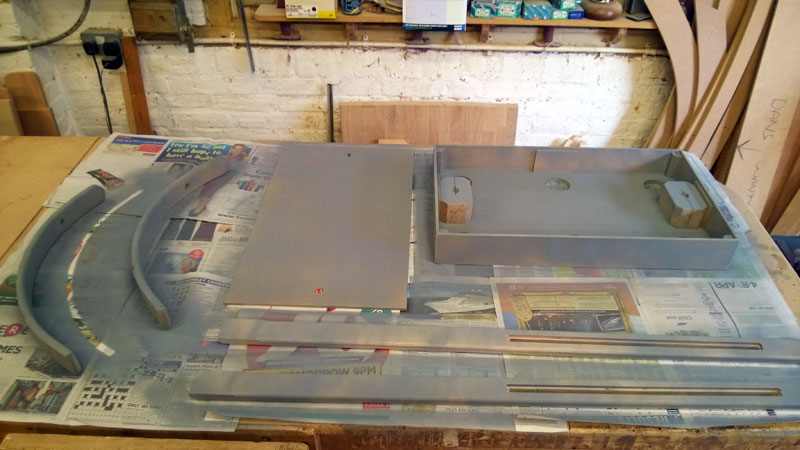 What silicone did you use to make sure the tank stays put?
Click to expand...

And how did you make curved arm? They look beautiful!
Click to expand...

I laminated the arms which involves pressing thin pieces of wood together with glue between two formers. 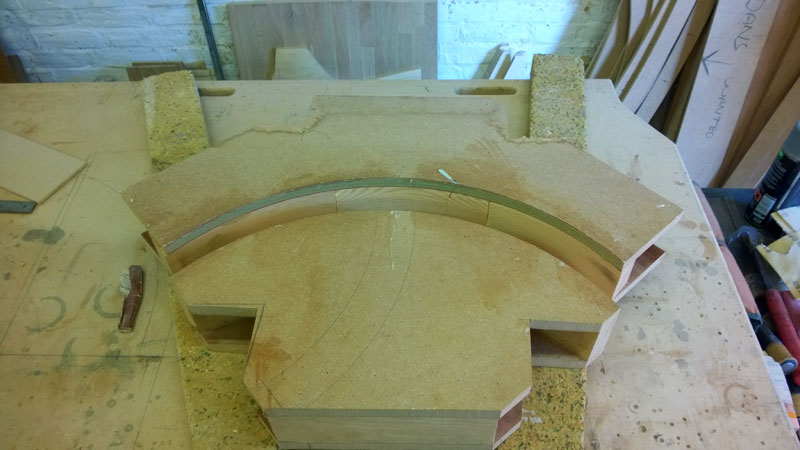 Next I machined Timber to the required dimensions. The pieces where 3mm thick and I used 6 to make one arm.
Depending on the radius of the curve effects what thickness the pieces have to be, the tighter the curve the thinner the timber has to be.

Then a resin based glue is applied to the timber, I don't recommend synthetic polymer glues like PVA for laminating as they have to much flex when cured resulting in excessive "spring back" which is a term used for how much the shape deforms from the curved shape when removed from the former.

Once the glue is applied to all pieces they are stacked on top of each other and placed into the former then cramps are used to pull the two halves of the former together which shapes the wood. 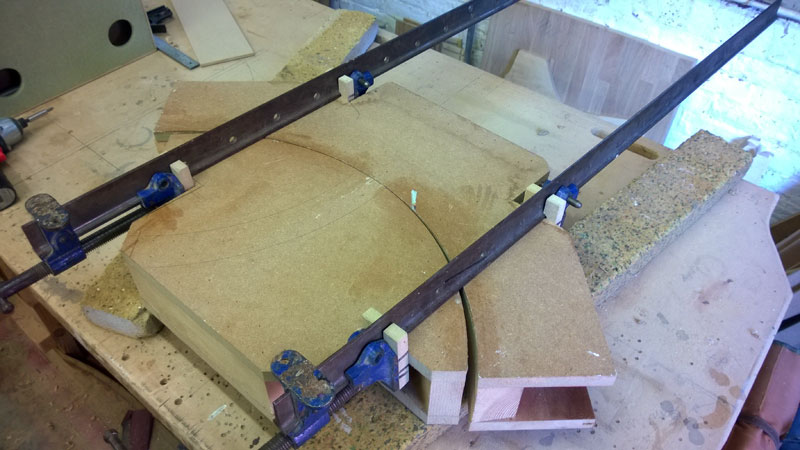 Once the glue has cured the cramps are removed and you're left with the solid curve ready for final finishing.

Has a present waiting for me when I got home too. 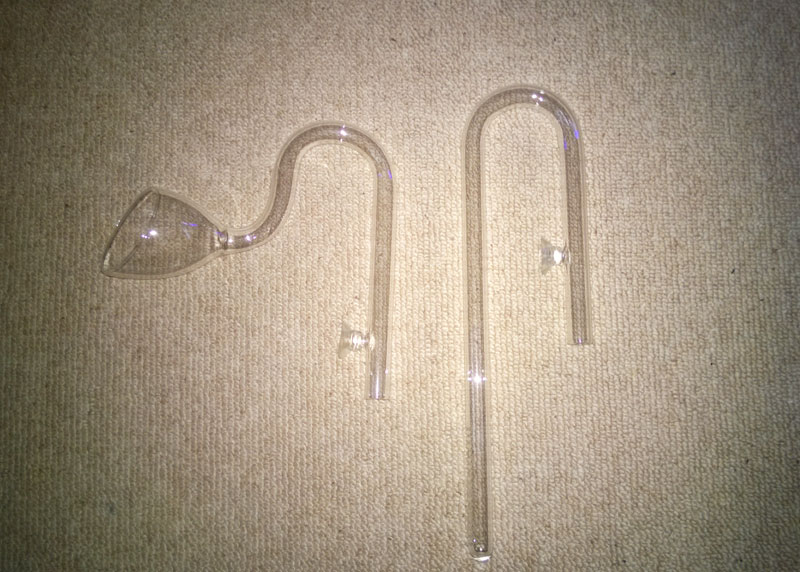