Just a snippet from my website r.e. the MkII version of my DIY LED setup.

Although I've called it MkII what I have done is in fact to make a new design of the unit and then transfer exactly the same electronics into it. Prettier and darned cool IMO

So pictures below but first an explanation of the changes:

1 - The unit is now made from 6mm MDF instead of 22mm pine. Much much lighter but still strong enough to support my 10ltr bucket if I need to empty and refill for any reason.
2 - Access is now via a lid on the top rather than removing the glass underneath.
3 - The bottom is now solid rather than glass so you can't see the internals.
4 - I have used lense holders fixed into the bottom section to 'tidy' the appearance up. They house 45Âº lenses.
5 - The unit has been veneered to match my other furniture.
6 - The fans reduced to 3 at each end as they fitted nicely behind some vent covers I bought rather than the 4 at each end previously.
7 - The unit is much more slimline now. 12cm to be precise
8 - I am now using proper heatsinks for the LEDs rather than cut up pieces of reflector

Why did I use lenses when I have mentioned before that the spread is much better without? Because it tidied up the appearance. Being 45Âº they do spread pretty well but if 1 LED is not as bright, the spread from the others does not make up for it anymore. I changed 2 LEDs that were a little 'yellower' than the others.

So the unit is new but the actual lighting setup has now been running for 18months with absolutely zero problems. The 2 LEDs that were removed were still working fine. It was just the differential in their colouration that meant I changed them:

Drawing out the plan pre-routing: 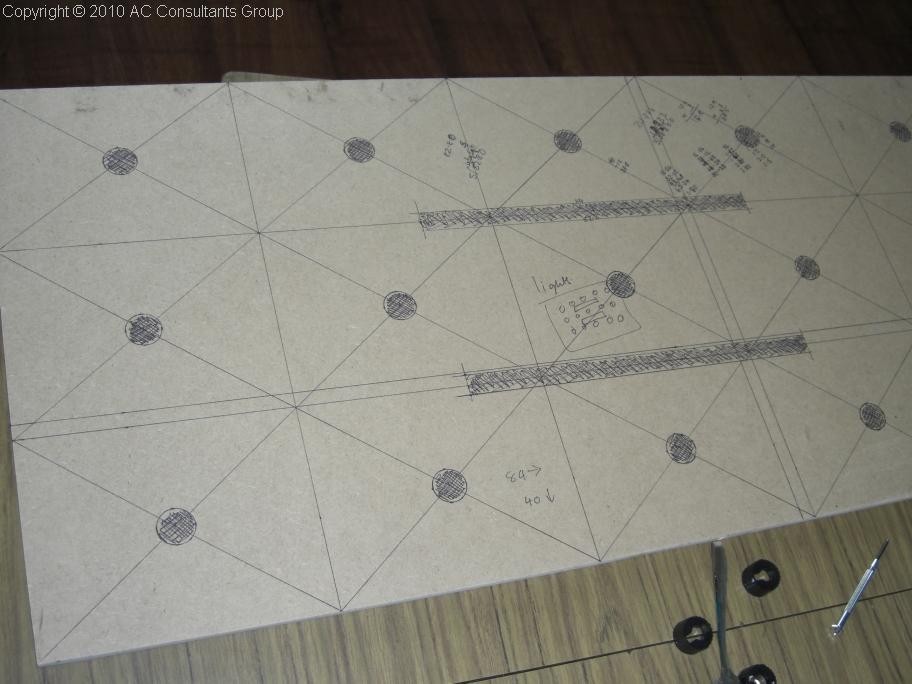 Aligning the fans on the side panels: 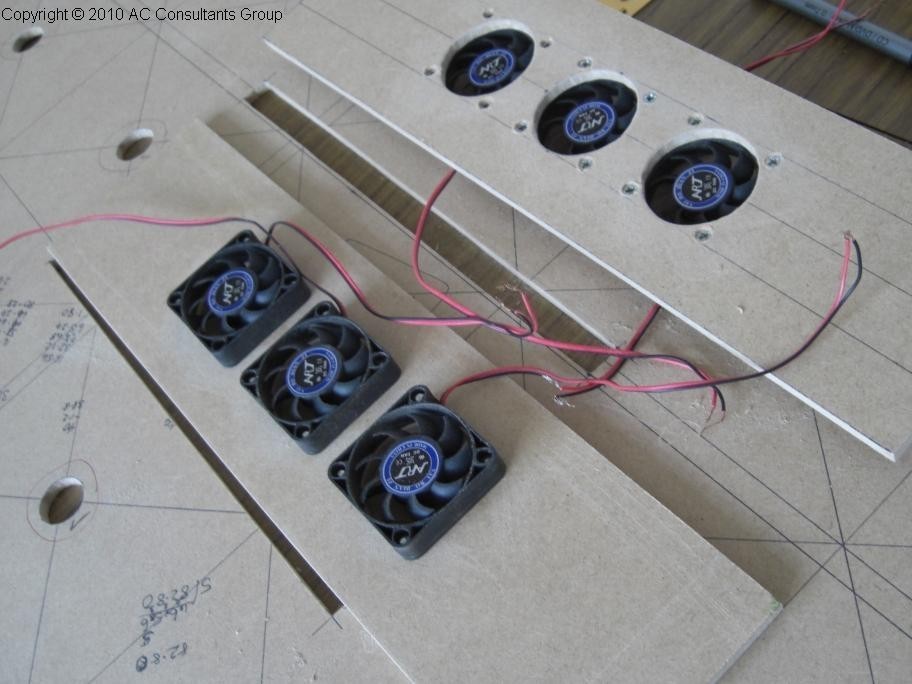 Making sure the lense holders fit into the routed holes: 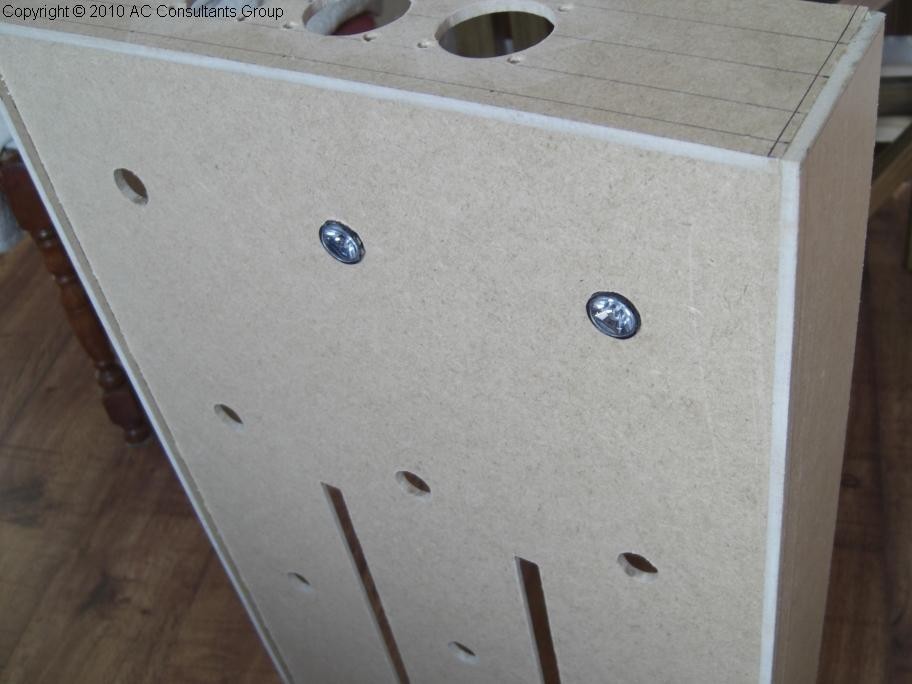 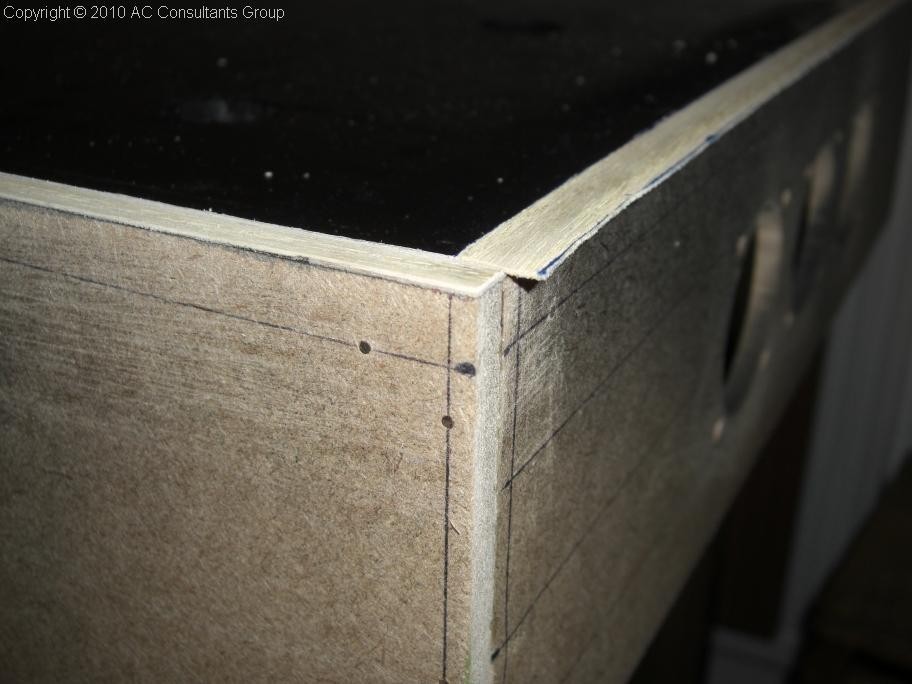 The finished outer with nice laquered and polished underside: 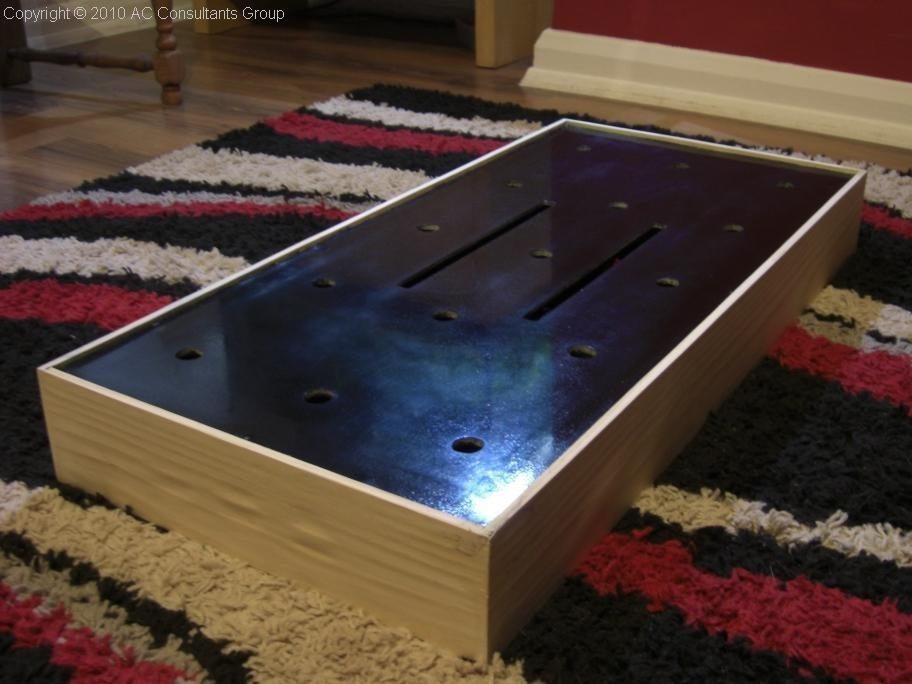 Positioning the vents on each end: 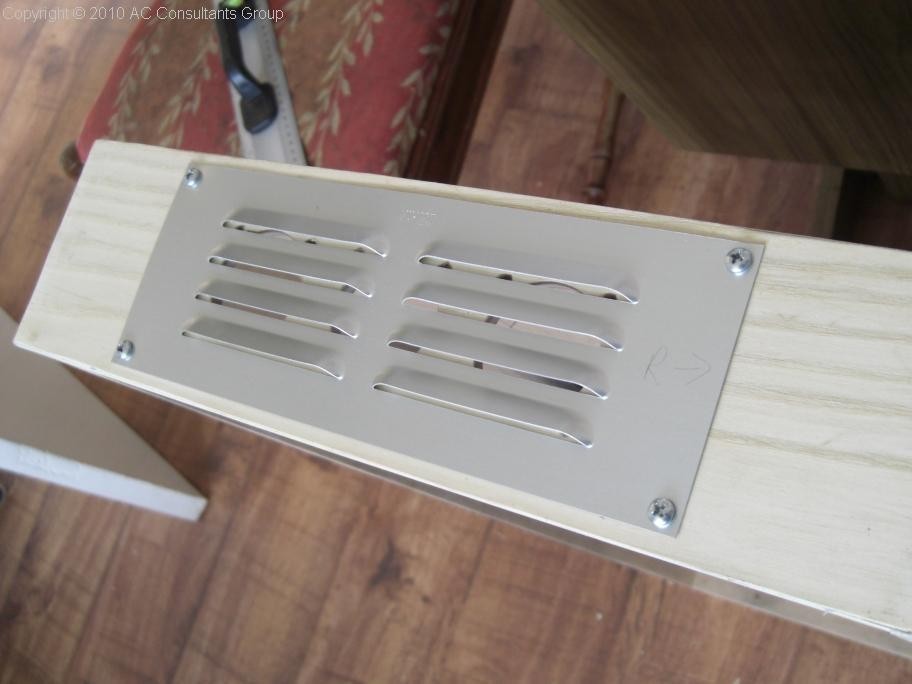 The lid in place (I routed a 2mm recess around the perimiter of the which the lid sits in: 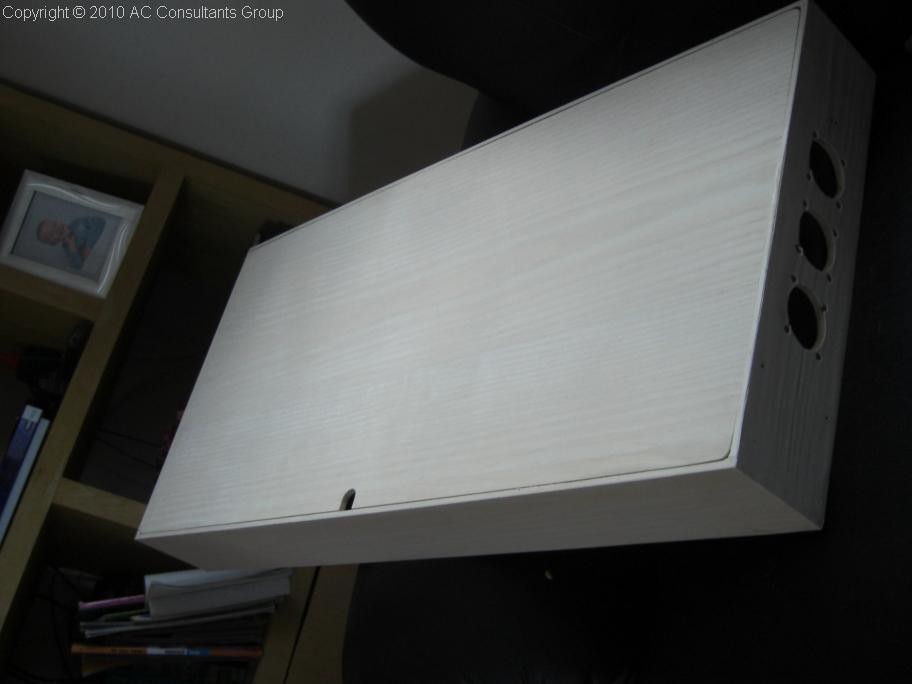 The electrics fitted inside: 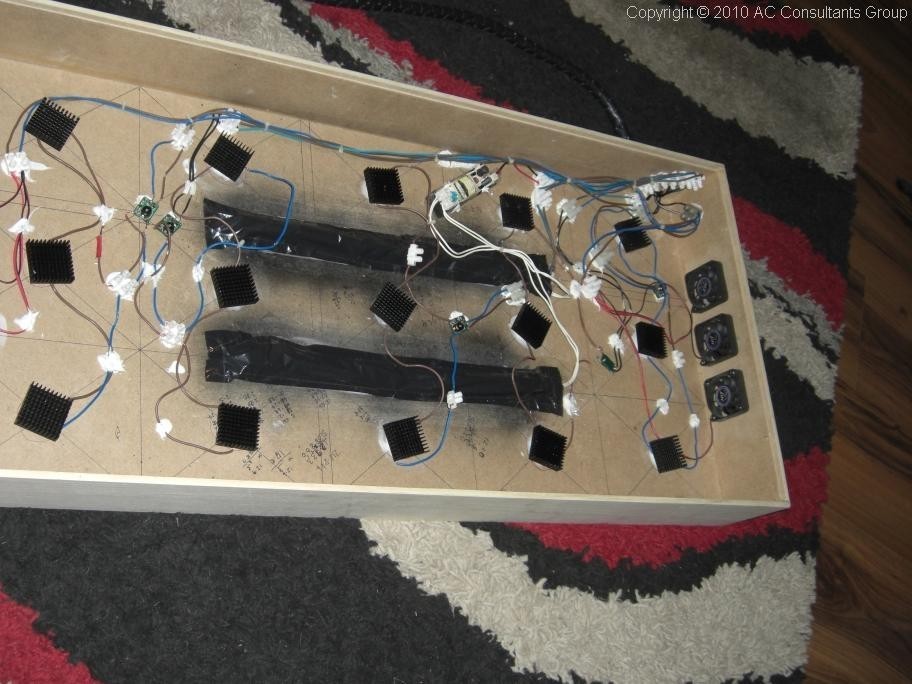 The aliens are landing , I mean yippee it still works : 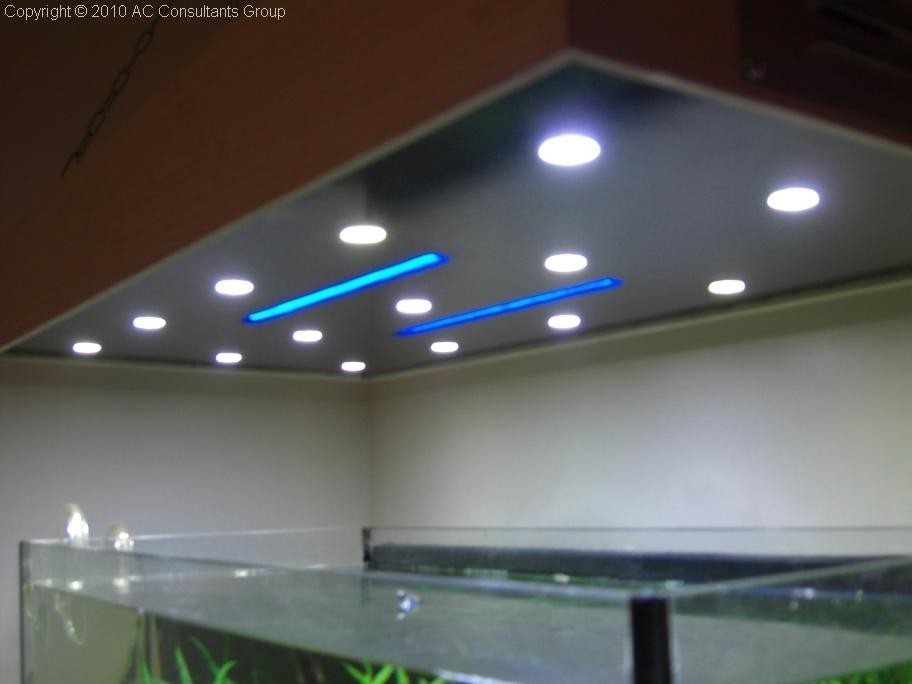 All finished apart from 4 coats of Tung Oil. That is why the veneer looks much lighter than the cabinet. Once the Tung Oil is on and cured it will go the same colour as the cabinet: 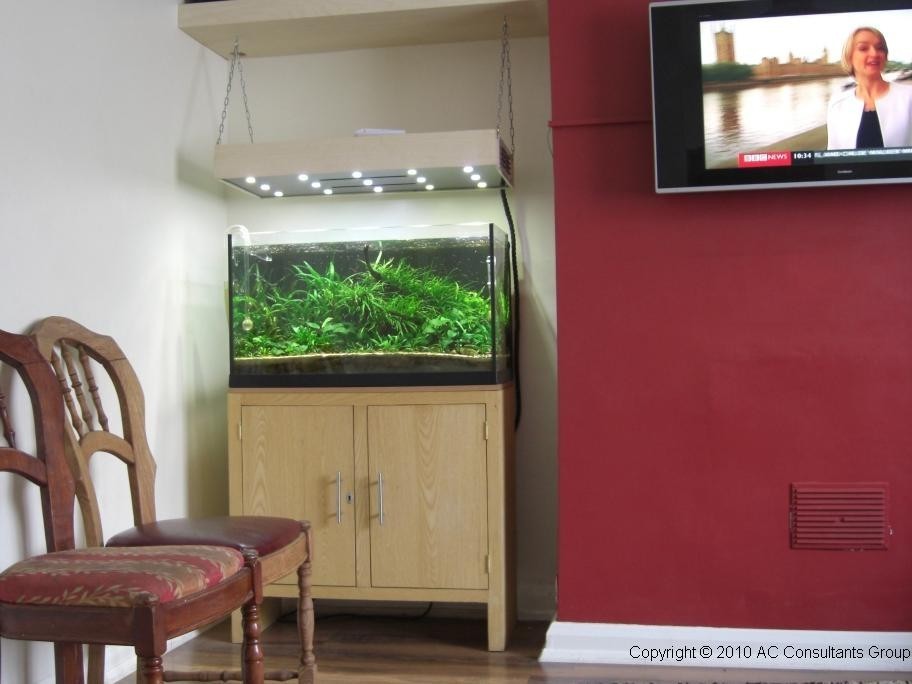 Awesome. You did a really great job, very neat and professional !

That is slick, looks fantastic!

One last little improvement on this project is the hanging 'equipment.

The unit was hanging by 2 chains that were linked to D ring on the luminaire and then up to some hooks in the shelf above.

I bought one of the hanging kits that are meant for the old style Arcadia Luminaires and whilst mine is much bigger than the units this is intended for mine is probably a little lighter .

The kit consists of 2 long cables which have a close loop at one end to hang it from. There are 2 shorter cables with round 'washer' type ends to attach to the luminaire, Both of these are similar to bicycle gear/brake cables in thickness.

Next ther is a little 2 metal piece which is like a cylinder with an internal locking 'grip' mechanism. they are only about 10mm in diameter. The hanging cable goes through the centre of the cylinder and then when oyu pull it locks in place. Then the luminaire cable threads through a groove at the bottom and a screw in part then tightens to hold it in place.

It is then just a case of raising/lowering the hanging cable by using the release mechanism on the cylinder unit. I used a spirit level and locked them off when I was happy the unit was level left to right. then it was a case of levelling the unit front to back which meant sliding the luminaire cables back and forth through the groove until the whole unit was level. then the screw in part is tightened to hold it in place.

That is this unit completed. There are a couple of minor cosmetics to sort out where the old D rings were but these are just a case of plugging the old screw holes with some tiny veneer 'patches' and then applying some more Tung Oil over the are athey were to match them in. 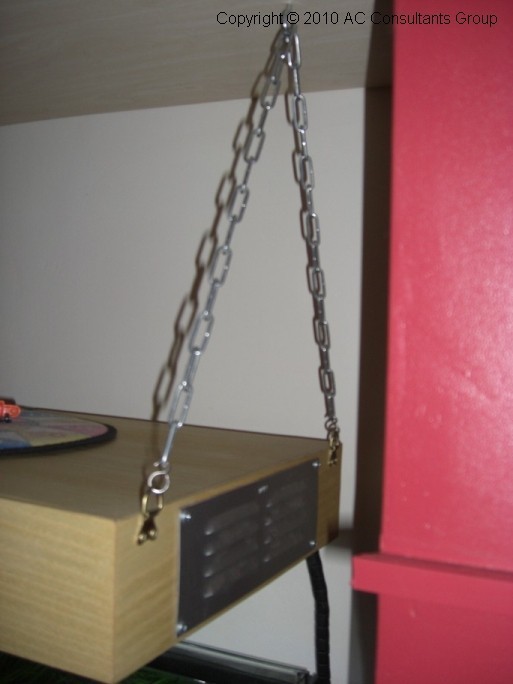 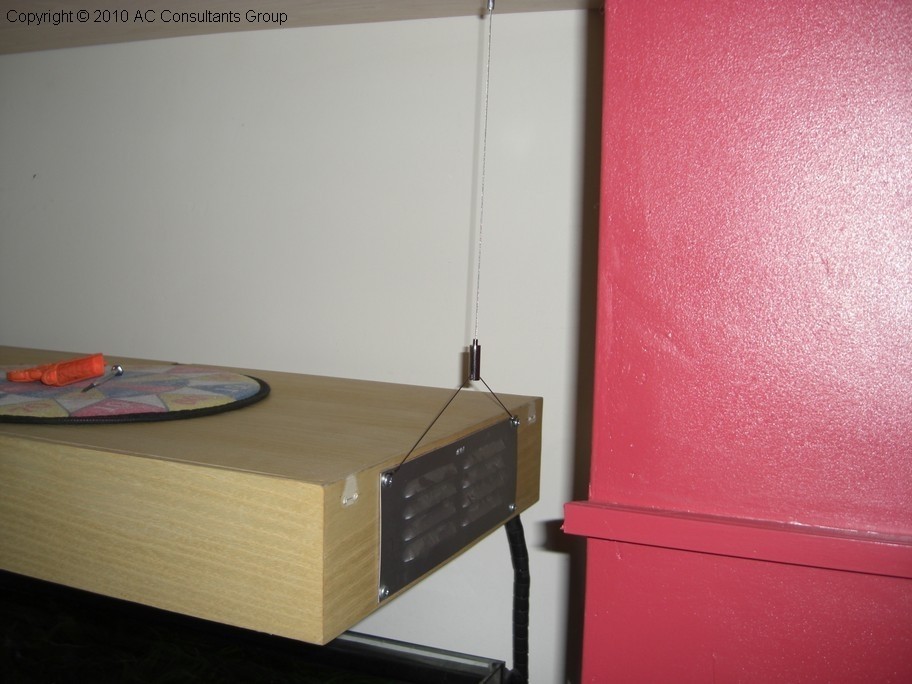 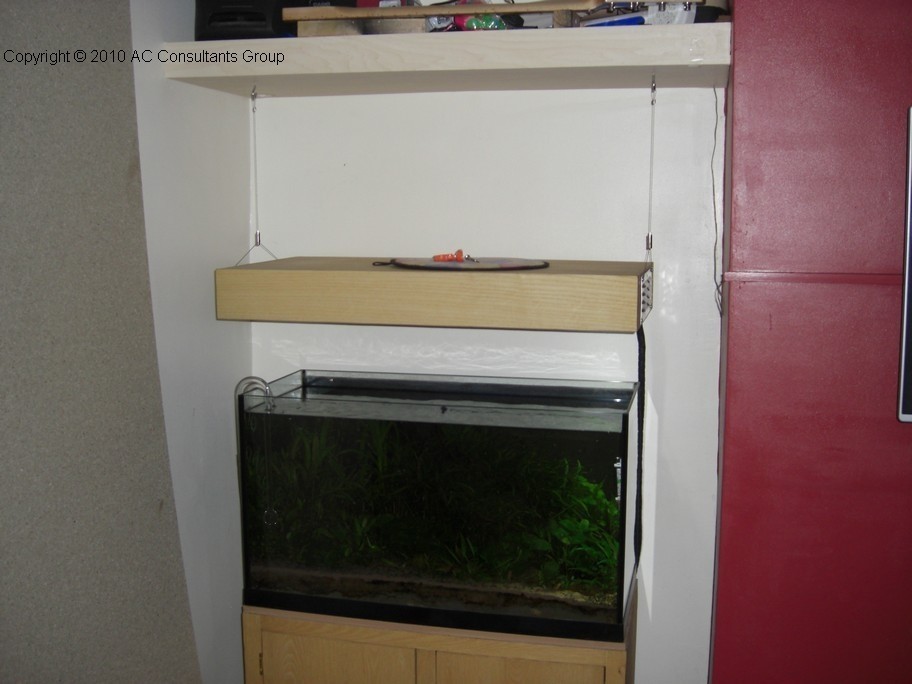 I really love the cabinet, tank (scape looks lush) and hood. I just can't help thinking the hood would look better sat on the tank. Do you have info anywhere on how you made the cabinet? What did you use to get the wood look onto the cabinet and hood (looks like something you stuck onto the base composite material)?

Just been reading through a load of posts over at planted box and they seem to think that a par38 LED direct retro would light anything upto a 18-24inch cube. That's about Â£70's worth of led at the going rate. They also Par tested a 3w brandless gu10 with 40degree optics and it was peaking at 230par over an extremely small area, a optic-less version should therefore produce over all around 70par, that's more than enough for most applications and a single one should be enough to light your average nano, I'll be placing an order to try the theory as soon as possible.
Don't believe the hype.

Glassbox not planted box! Brains not with it recently!
Don't believe the hype.

Garuf. I think while the PAR results are impressive to say the least the problem I am having with people's PAR readings at the mo is that they are not to my eyes substantial enough. What I would like to see is for each application a huge amount of tests. Meaning that I see a lot of PAR tests where the tester give a dingle figure. Where abouts is the reading taken from?

Just to clarify my thinking a little over the 10ltr I have 3 x no name 3W without optics. I would say from the growth it is in the medium bracket. Sort of 2-3WPG flouroescent. This is why I have my doubts about the X% LED = 100% of statements out there.

Yes we know that the Solaris came out at 27% power to equal the MH BUT what MH. What reflector? We know from Tom Barr's tests on the ADA systems that the PAR does not add up to the Wattge they use.

This is what holds me back from saying that 37W is good enough forX and 1 x 3W is enough for Nano. I know that 1 LED isn't enough for my 10ltr.

I am currently at the stage where I am estimating LED light = 1.333 x flouro light. I'm not going into MH because with a single point source relying on a large reflector the differences from 1 MH to another maybe even greater than the flouro example above.

I think there are far too many peple testing PAR without actually understanding some basics about light!!! These tests need to be like a 'time team geo phys' where the readings are taken over the whole of the footprint at 1 inch intervals and then that info can be plotted. then the grid or pattern of LEDs/lights can be overlaid. This should then be done several times more for the lights at different heights.

Then you would have a definitive 'in my tank' set of results detailing that with the lights X above waterline and X above substrate these are the readings, it would show what the ideal height was for the particular setup and pattern to fully equalise the PAR on the substrate.

Thats a lot of testing for people who have the meter and think that a few readings are enough Its not just the single light source reading that is important. It is the relationship between 1 light and then other i.e. overlapping which is also a very key issue.

I wouldn't want you to think you are going to get enough light from a small amount of light. After all my 37W is above a non CO2, non fert tank with no water changes and only slow growing plants. We all know what result I would have if the light was as high as some are suggesting. Algae fest to the extreme, but I don't see it.

Tests are one thing but from what I see in my tank r.e. the plant and setup and what we know about light/CO2 in a high light tank I can virtually falsify those readings already. There may well be some huge diffeences between today's no name 3W and the ones I ought 18 months ago though.

p.s. I'm going to do those tests when I get a new camera. Mine won't open the lense anymore. lol Must've worn it out.

That is SWEET dude! Very slick and definitely complements your home furnishing. How I wish I had woodworking skills and tools now!
You must log in or register to reply here.
Similar threads