This is the Nights King (don't usually name fish but somehow this fits), had him for over a month now and he has a progressive cutaneous growth that initially was just a blue lumpy smudge near the base of the dorsal (there is a corresponding blue dot on the other side but no lumpiness). It grew progressively larger in a little over a week so I took the 2 pics below, 19th April. 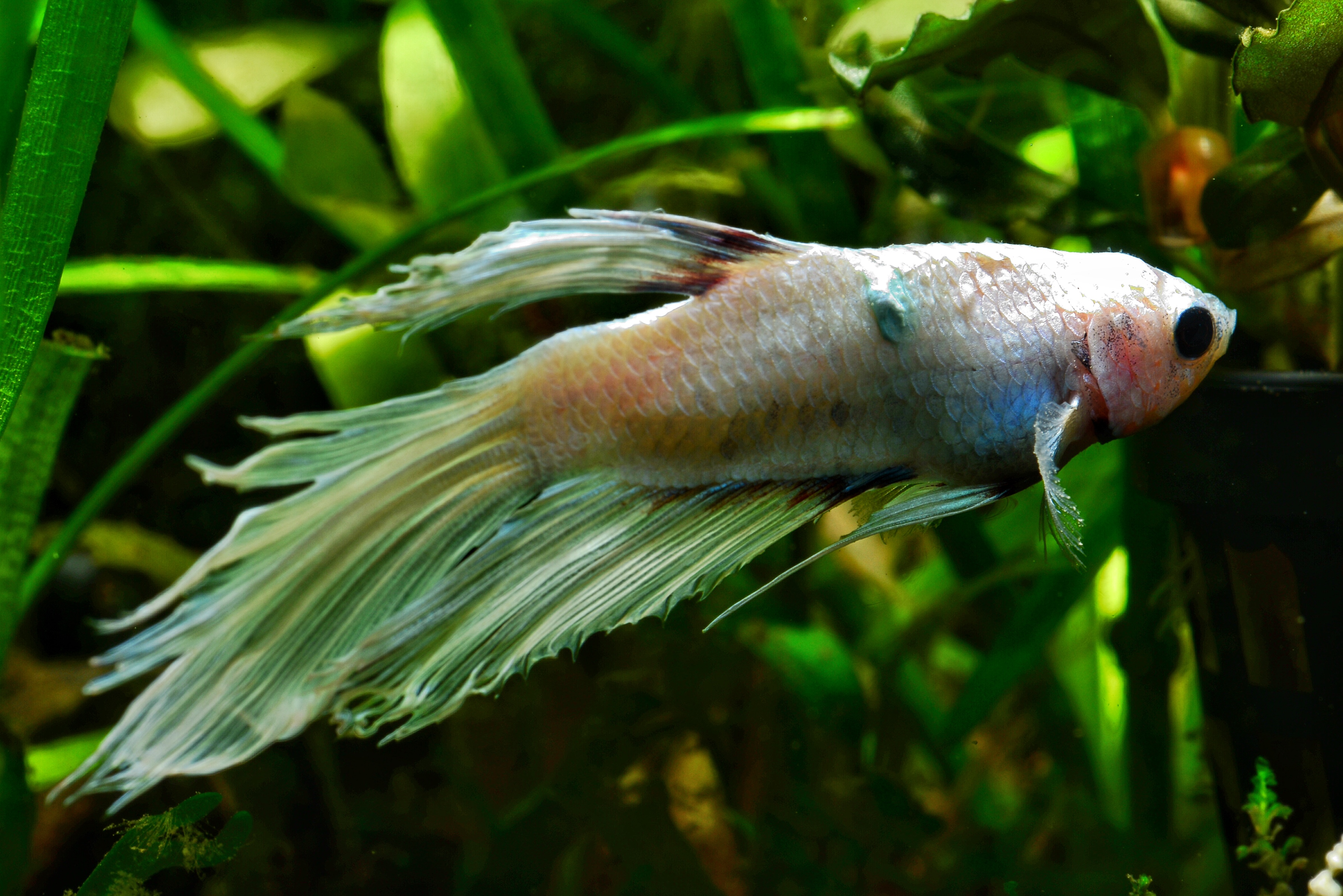 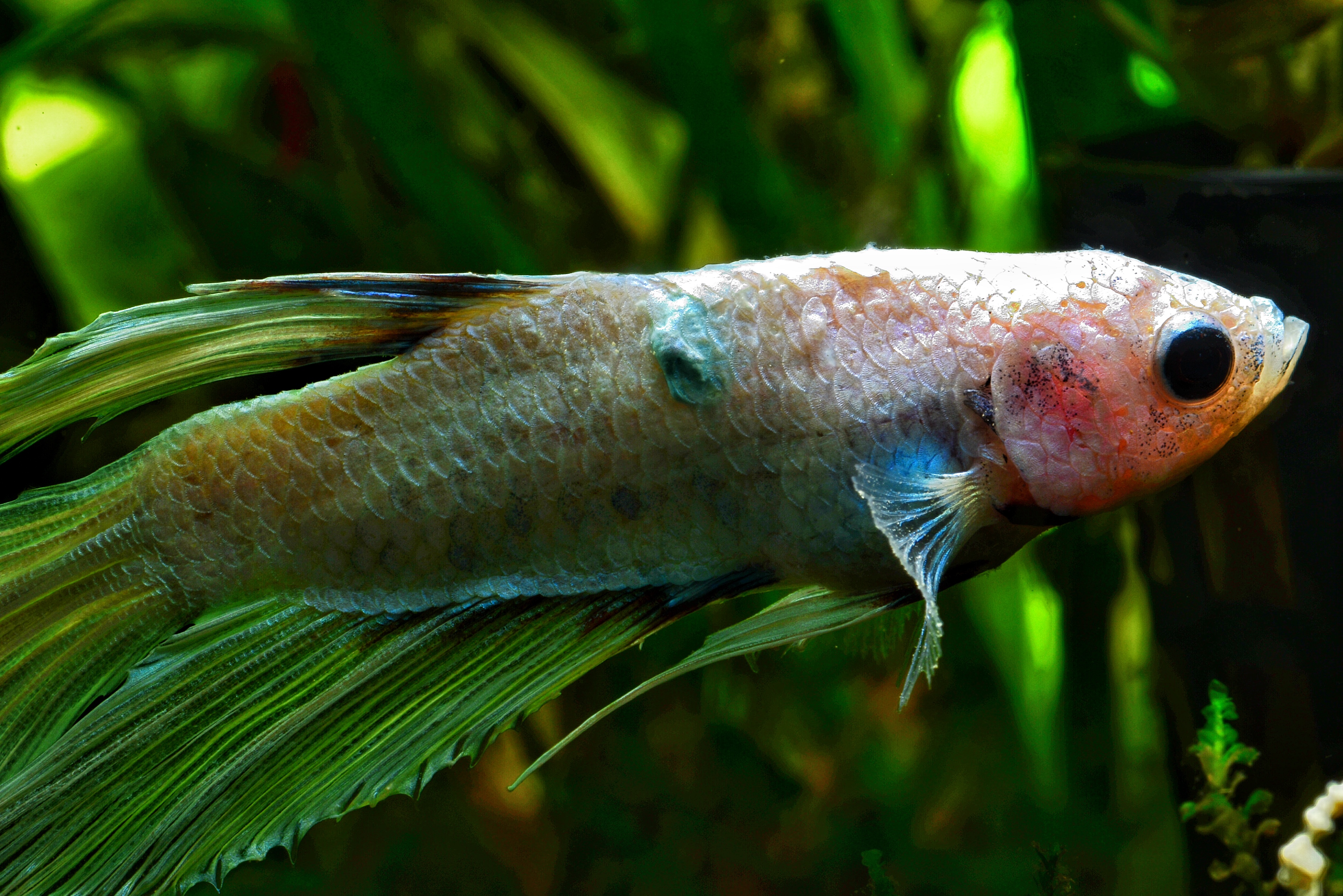 This is a closeup of the above pic. 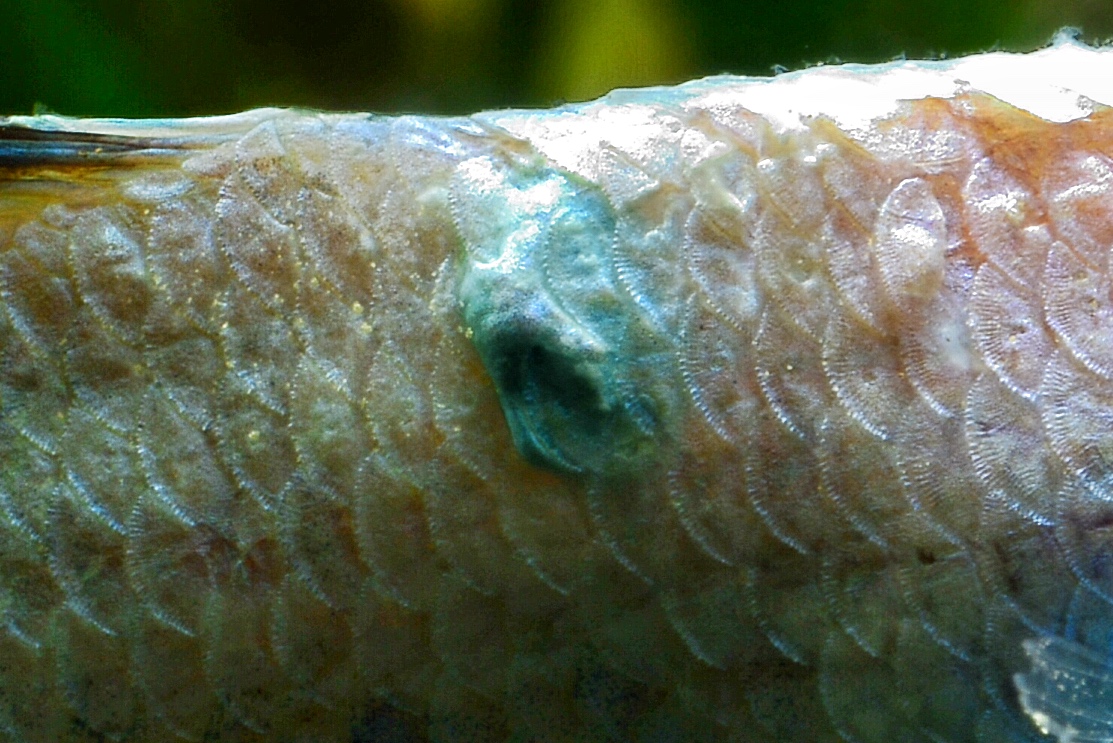 Meds dosed to the tank (not all at the same time) as precautionary measures have been Waterlife Protozin to deal with any fungal disease, Fenbendazole to treat for any parasitic infection and eSHa Hexamita. As of the 7th May the progression of the growth can be seen. 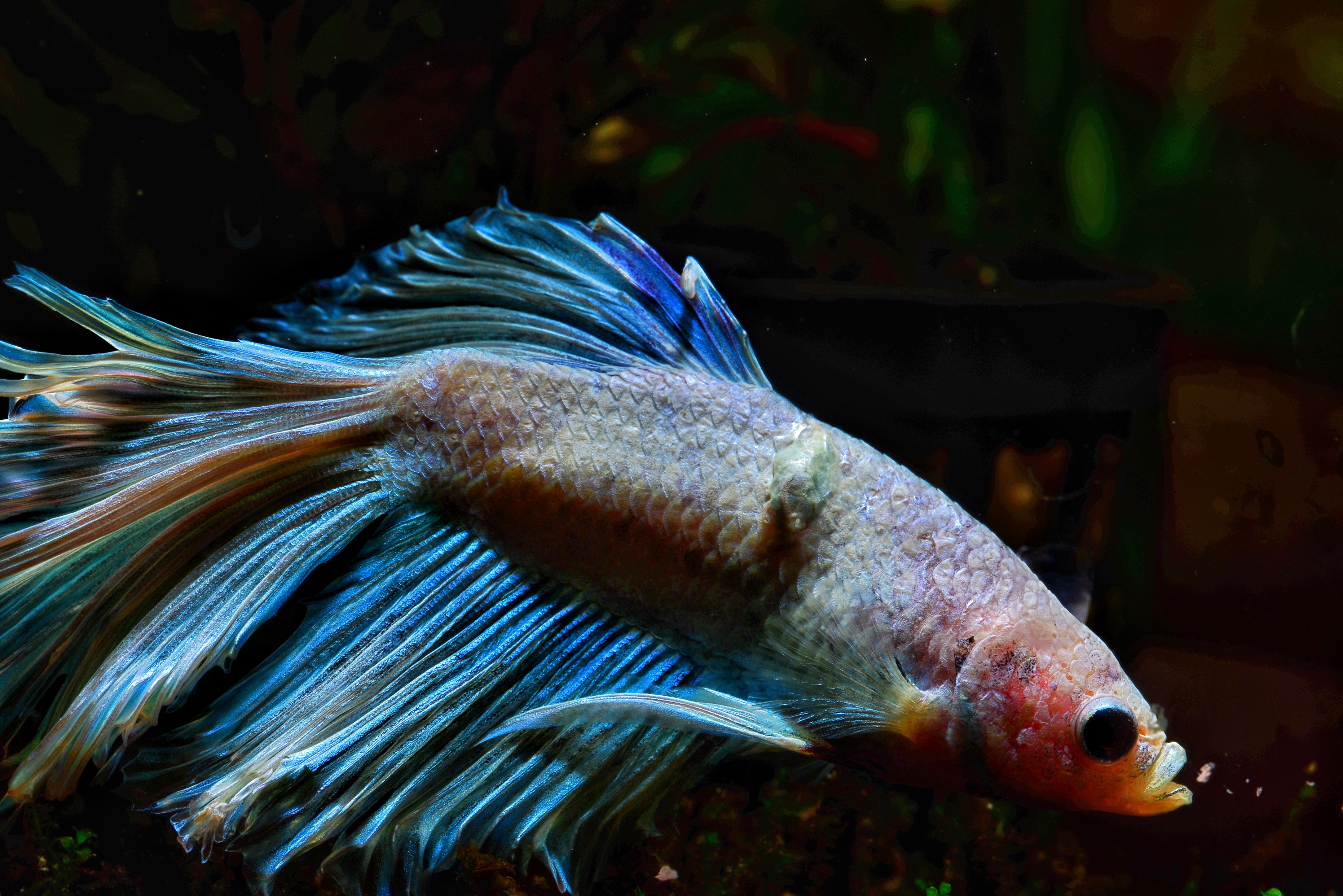 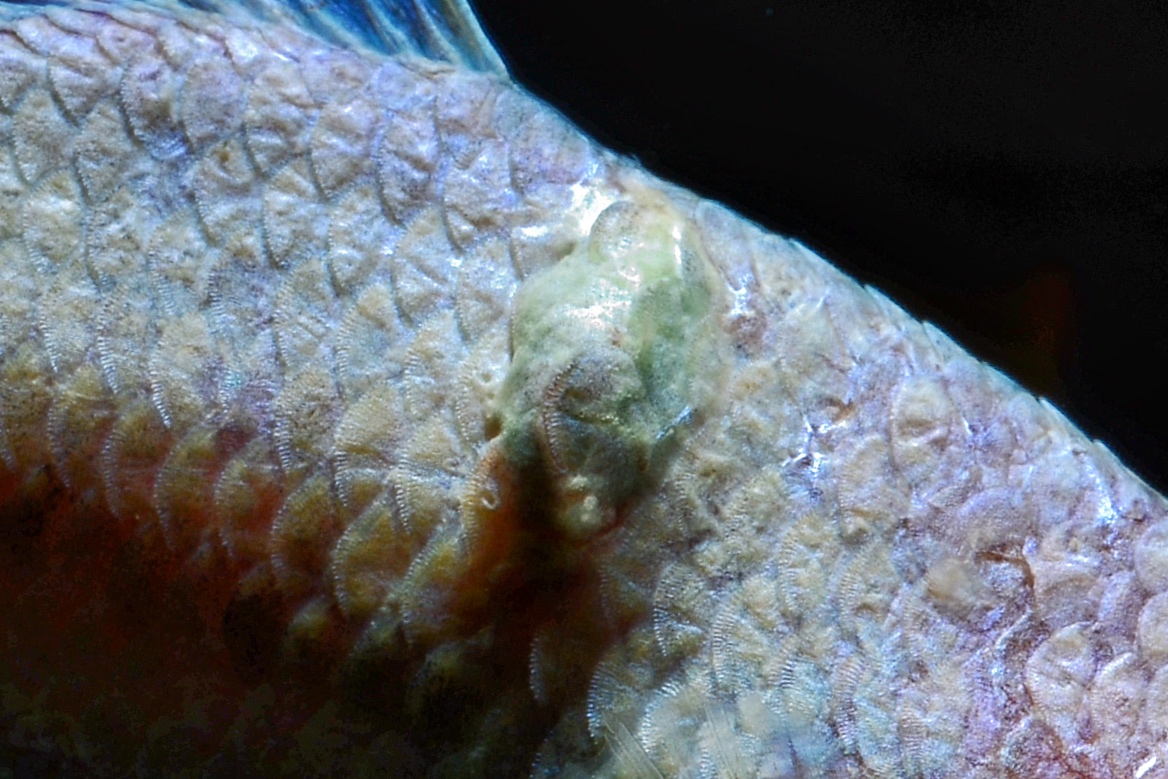 On the 11th there was noted to be an injury to the growth which periodically caused the fish some discomfort. Sole occupant of a tank that is well planted and where there is some hardscape at the water level that he as been able to swim over to get to behind a large sponge, likely cause of the injury. 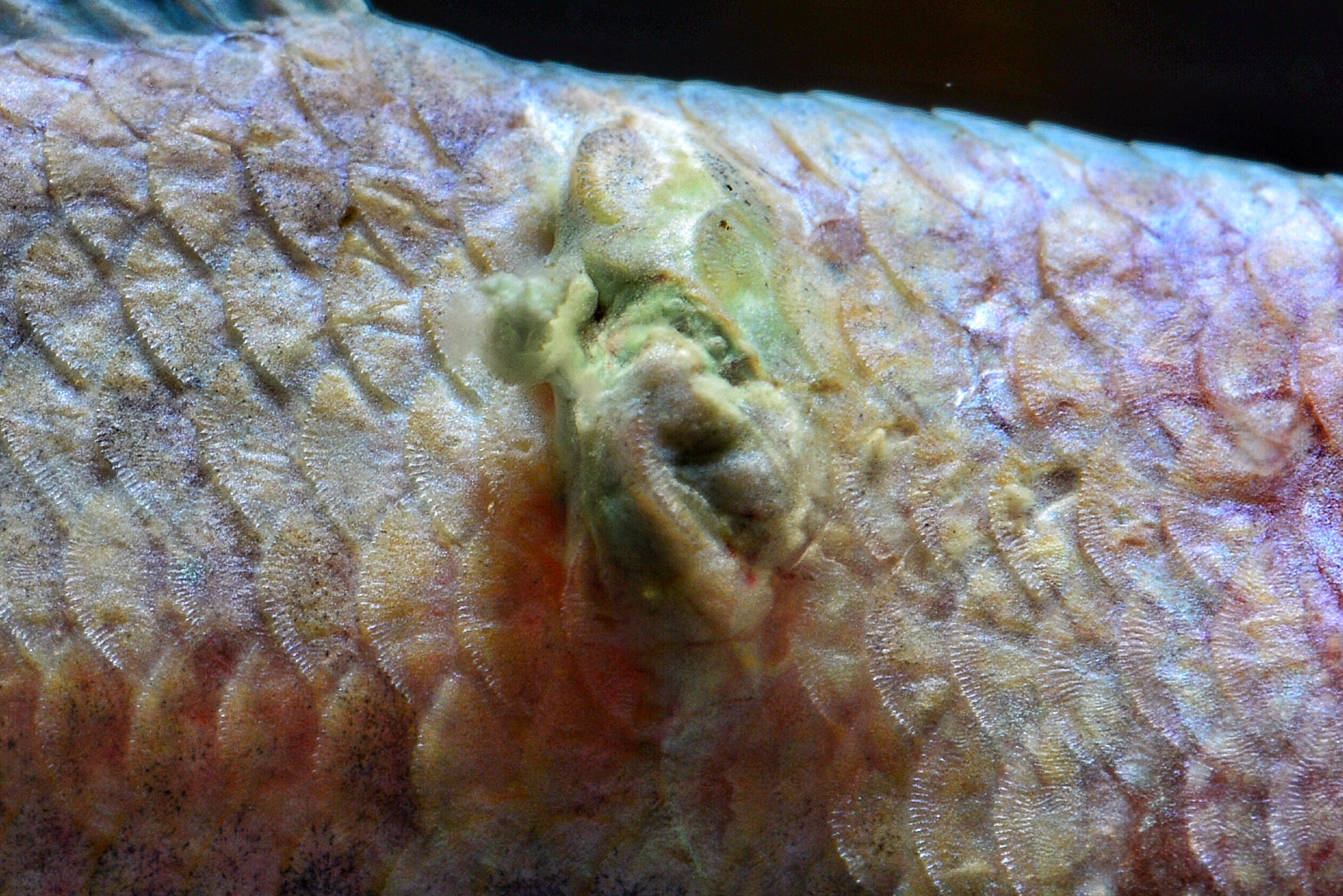 The pic below is directly lit from the front through the glass as opposed to the above pics shooting down into the water column from above the tank, slightly different definition in appearance. 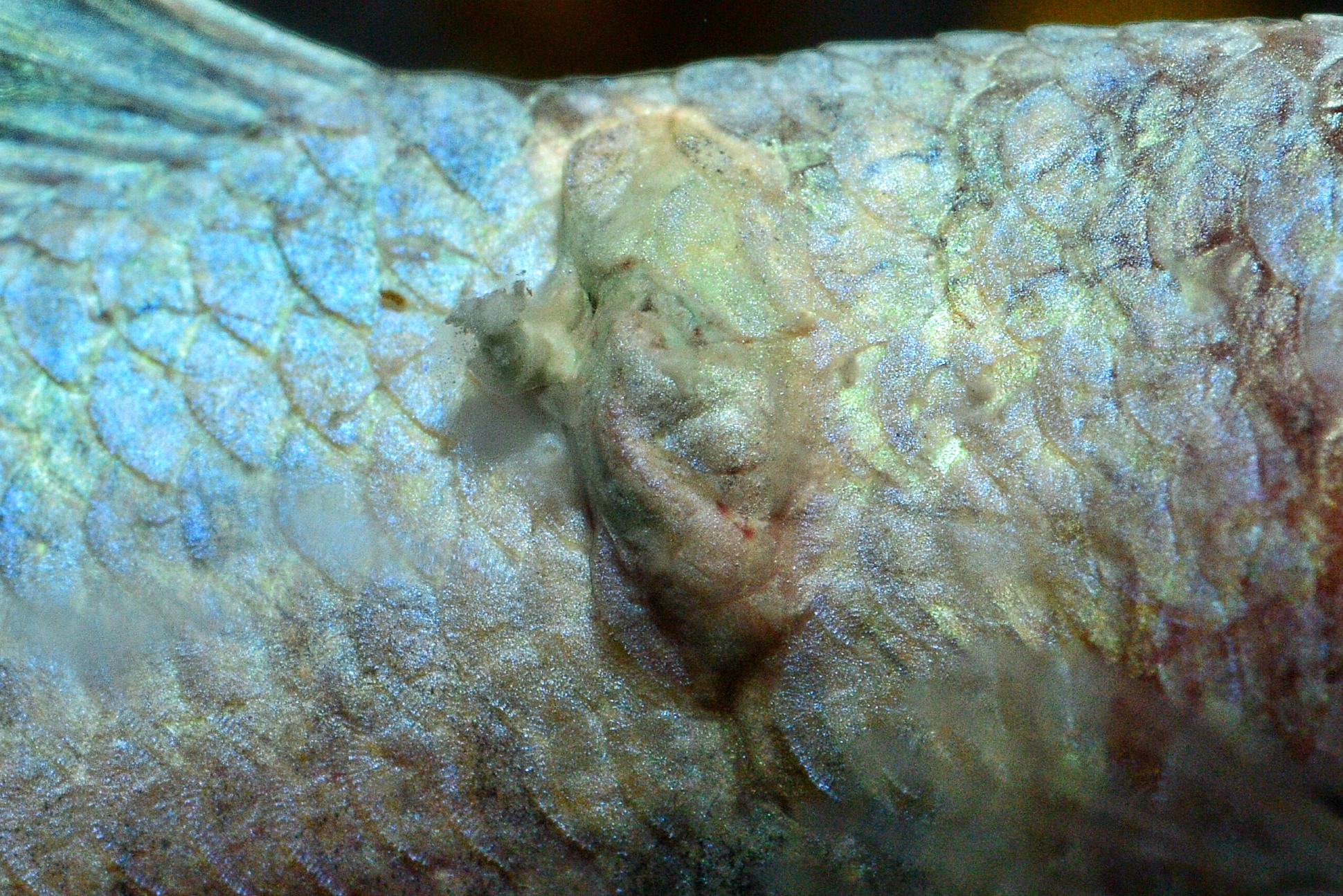 After a few days in another tank (10L Dennerle Nano, sterilised in the dish washer on high heat before use) bare of hardscape bar a small filter (new, never used in a tank beforehand), heater (new) and a large Anubias Longifloria for cover, this is how the growth now appears today 15th May, the wound has healed but there has been no regression in size, no longer in discomfort, is sufficiently mobile for a Betta and typically is still eating like a pig (thankfully). Front lit again, excuse the scratched glass. 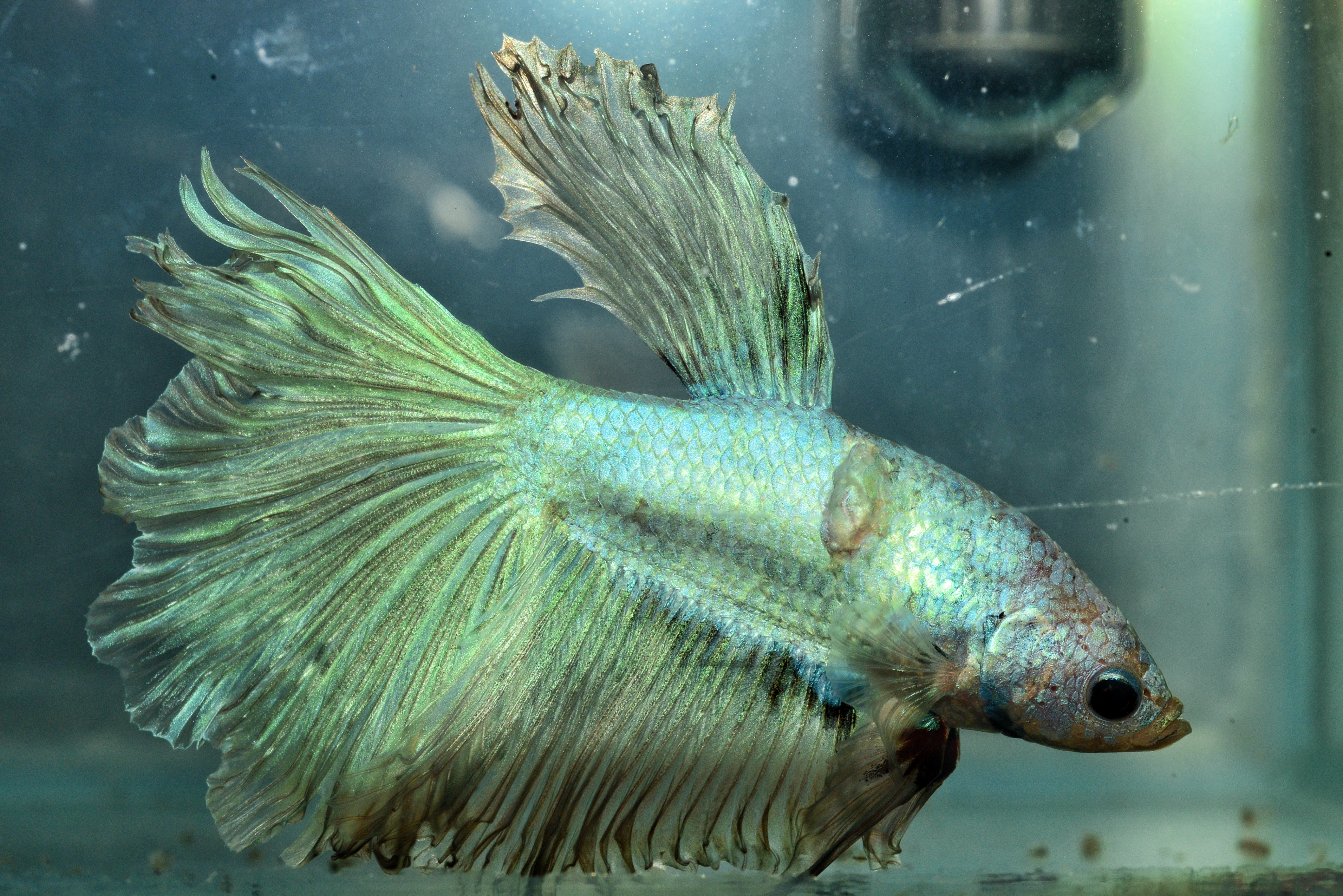 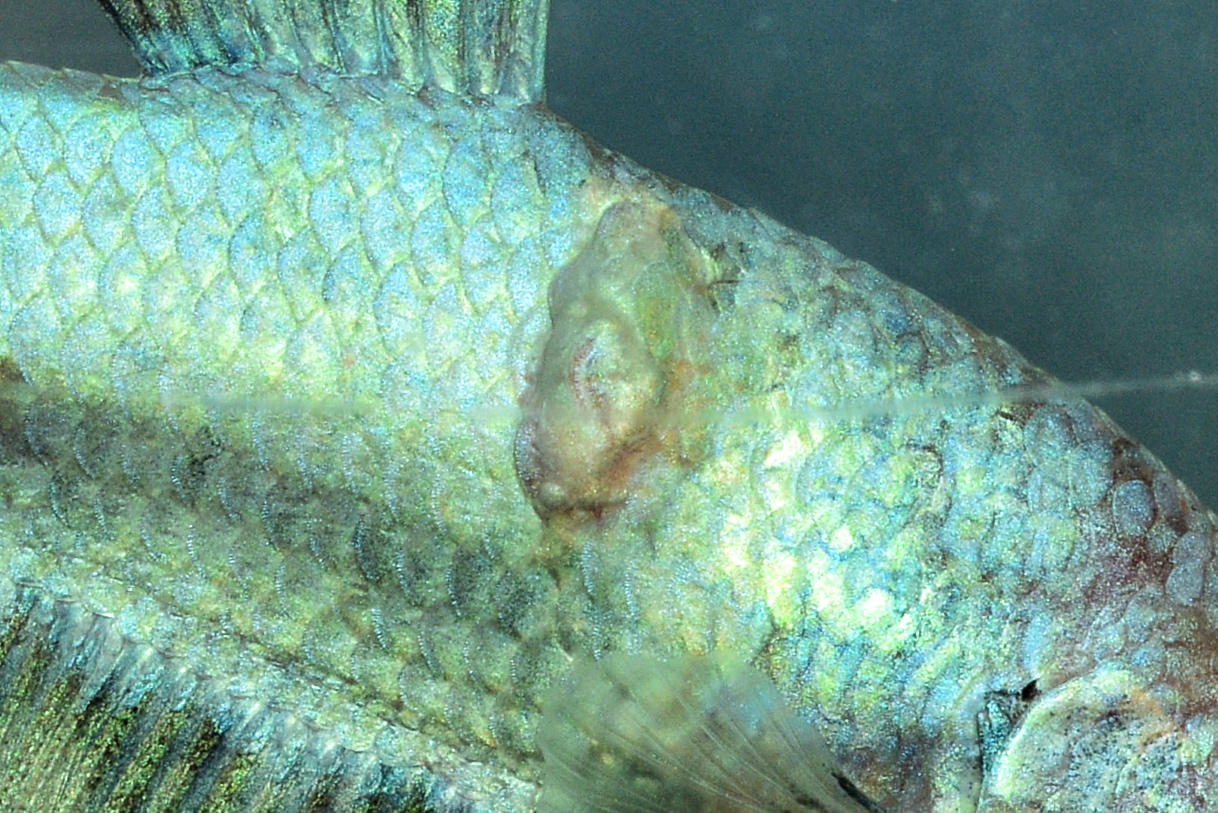 Lit from above and behind to let light come through the flesh of the fish you can see that the growth appears to be cutaneous only. 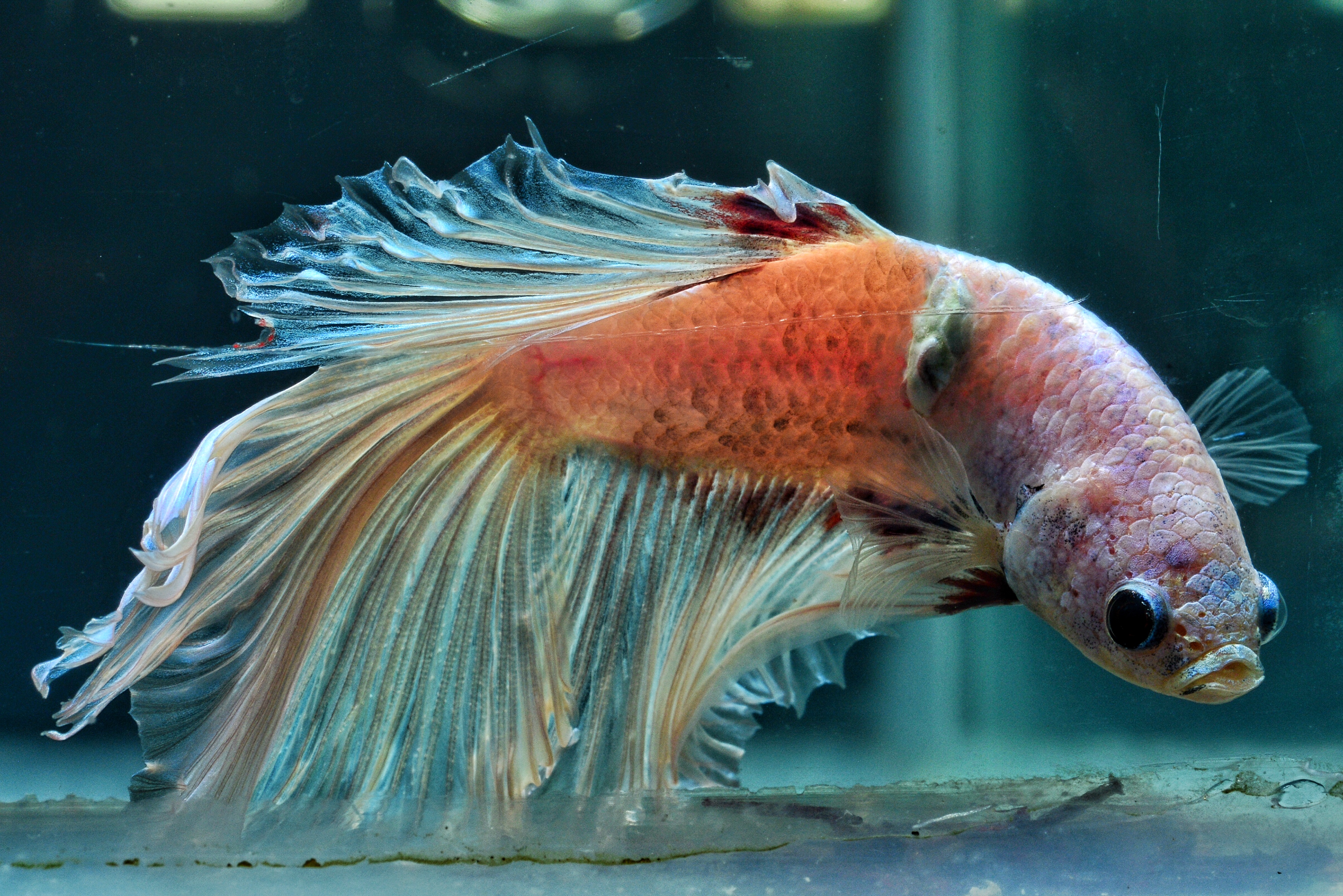 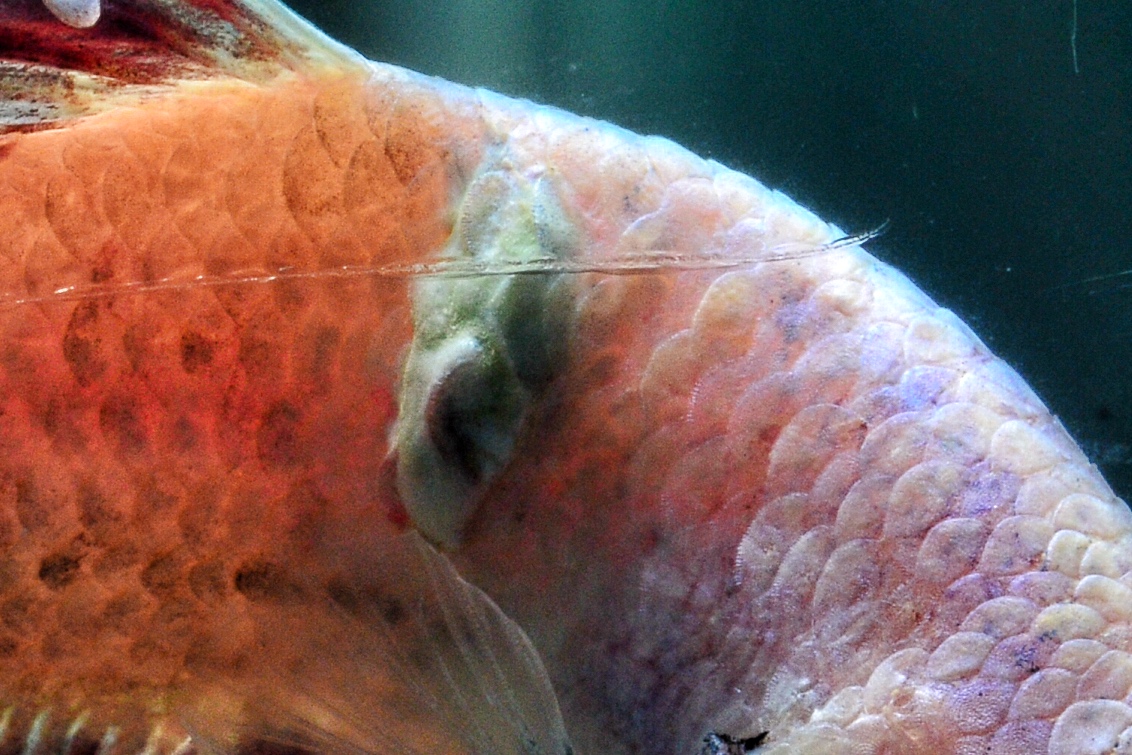 If anything the growth appears to be increasing encapsulation of the surrounding scales. 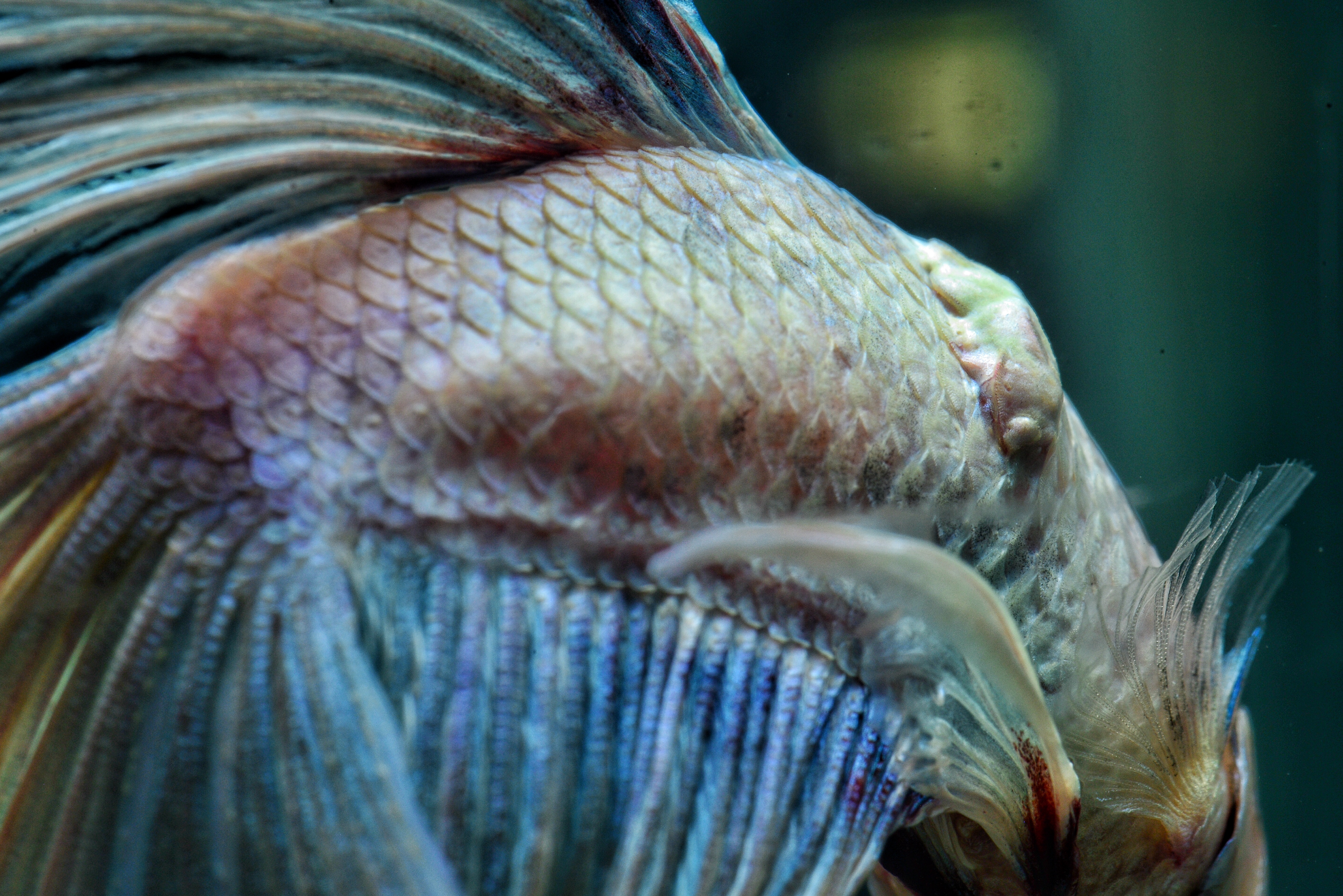 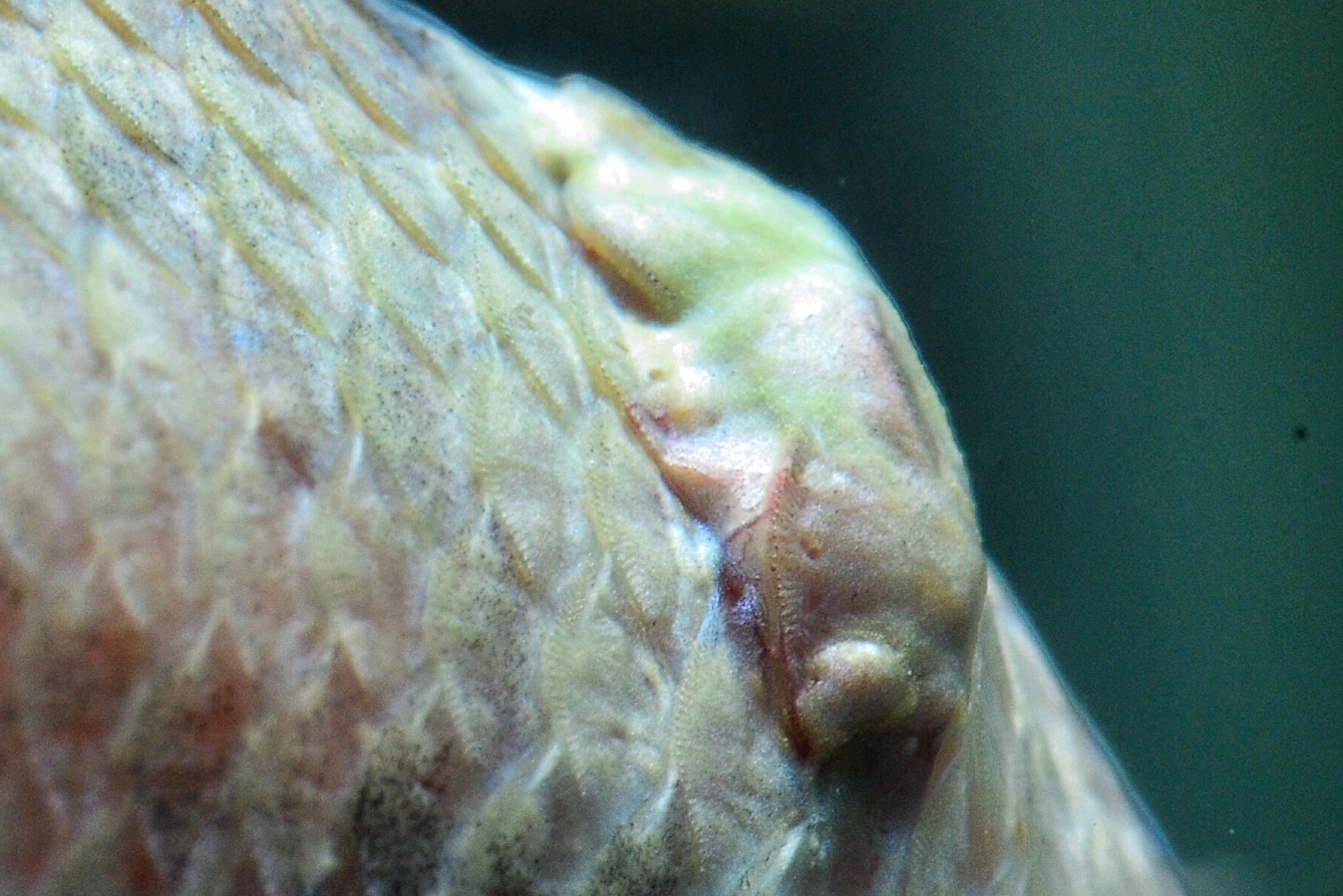 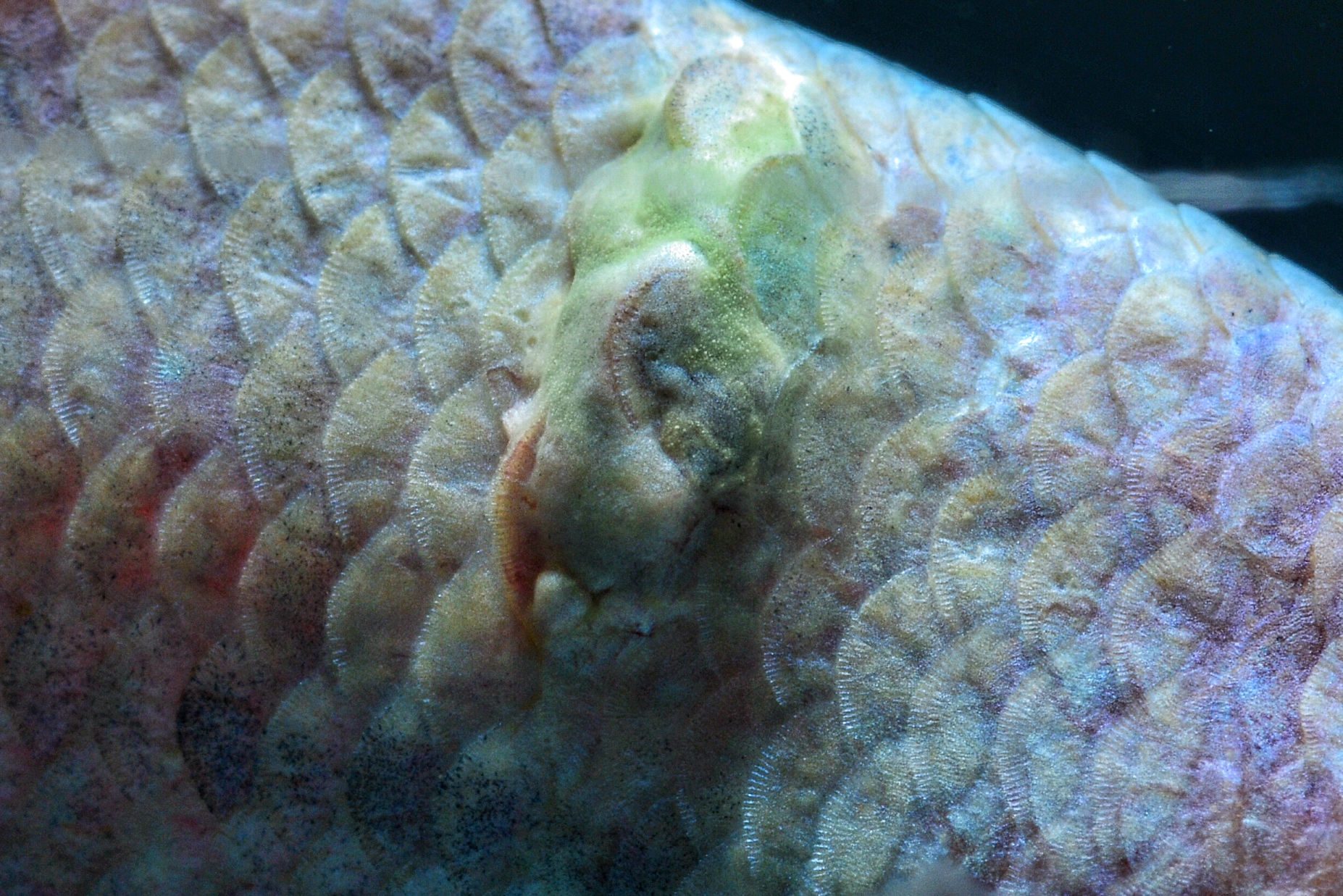 Again showing appearance of cutaneous growth only and originating from just in front and below the dorsal. 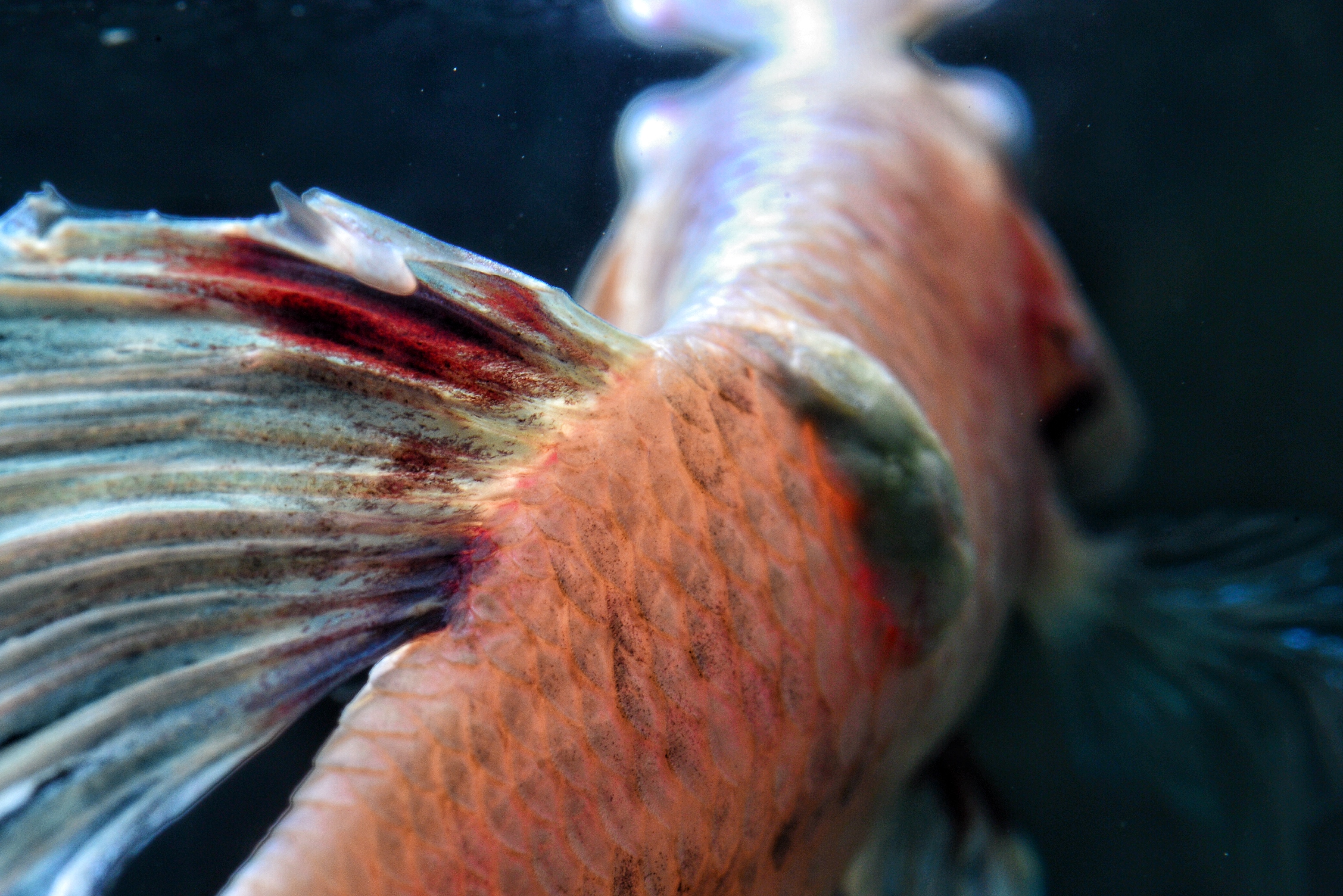 I'm not in a position to be able to conduct microscopy or histopathology on this growth for a definitive answer as to what it could be. Could it possibly be an Iridiphore tumour due to the corresponding blue spot on the left lateral in the same front and below dorsal position, no idea, only histopathology could tell me that, whether it is benign or malignant would probably depend on how much invasion if there is any to the underlying tissue if only going by visual inspection.

Any thoughts or suggestions on a course of remedial action would be appreciated.

Unfortunately there will be no taking it to a local Vet who most likely doesn't specialise in small tropical fish surgery and I am most definitely not going to put the fish through the stress of transportation to a specialist which would likely reduce the chances of survival on a 50:50 outcome while costing me a kidney alongside an arm and a leg.

Choices are limited to leave this to get better/worse over time on its own or through meds, deal with immediately by blunt force trauma/Eugenol euthanasia or perform the surgery required. I'm inclined to go with the latter to at least give him a chance.

So in an effort to save the Nights King I am currently collecting the necessary supplies to be able to perform (competently) the surgery on this poor fella myself, anaesthesiology will be using Eugenol (studied papers on anaesthetic and for worst case outcome euthanising dose) and the procedure will be Dr Lohs' Betta surgery -


Hopefully I should have everything needed by the weekend and at some point later report back a positive outcome, still waiting on the Orahesive powder, Waterproof barrier film spray and a fine tipped cautery tool to arrive, the Eugenol I have is Bud derived so it's 90% concentration.

Kudos for finding this video and wanting to save your Betta

2) fish outcome post surgery ... this fish does not look particularly healthy, while Dr Loh mentions fish TB not being involved in the skin mass, this fish does have other symptoms associated with early stages of that disease (there are several variants detected in farmed Bettas)

The curling edges on his fins is NOT normal - this may be bacterial damage from tank conditions before you purchased him, or may be an existing condition


FWIW a favourite Betta began to show signs of lifted scale growth when I’d had him for a few months (he was likely 3-4 months when purchased)
Over a couple of months, it grew to form a distinct growth, looking much like the cauliflower appearing lymphocystis growths
https://worldbettas.com/lymphocystis-cauliflower-disease-in-bettas/
But there was only a single growth site and it had similar coloration to his body (a very unique multi hued rose gold green copper HMPK), as it continued to grow rather than disperse, it was obviously some sort of hyperplasia (tumour)

He continued to appear perfectly healthy for several months (though I’d isolated him to his own Spec 5), then began to slow down, less active, less frenetic about his food; when he showed no sign of food response for 2 weeks, and was beginning to exhibit loss of body condition, I chose to euthanize
He went very quietly

Thank you for your reply @alto it was much appreciated.

Unfortunately as of this morning he has passed on his own accord. Yesterday I had noted he was a whole lot less active choosing to lay on the bottom of the tank at the front glass, respiration appeared normal (about 1gb/s) and he had no issues swimming to the surface for air gulps but he kept hiding the problem side (the mass looked like it had reduced a little and not through injury, the skin was intact), so I had an inkling he wouldn't last 24hrs, I didn't see him go look for food until the lights went out, he did eat as there was food available to him (live bloodworm in a glass dish).

Over the last few days I decided that I wasn't going to perform the procedure on a live fish mainly because of the need for Intramuscular AB's which is something I was not going to be able to provide and for such a small fish with a large surgical wound, and no matter how robust the wound dressing was going to be, going without would likely lead to a very poor outcome. If any procedure was going to take place it would have to be postmortem (if only to gain the experience in a controlled manner of performing this type of surgery), but anyway the cautery tool still hadn't arrived so the point is moot.

However I did investigate underneath the skin to have a look at what I would have been dealing with and trying to repair, it wasn't good, the mass underneath was not solid but of a white cream like consistency and had pervaded into the tissues below the skin, very likely all the way into the abdominal cavity itself which would explain the visual reduction in size of the mass with no external injury. That was as far as I investigated as the overly ripe smell emmanating from the wound was tweaking my nose a fair bit so I didn't open the body cavity for fear of spoiling my breakfast. No pictures I'm afraid.

I did all I could to improve his condition and bring him to full health but unfortunately it just wasn't enough, nothing I could have done differently would have changed this outcome, likely on his way out before I even got him.

Sorry to hear your loss m8

But Kudos for trying to save it

Thanks, just as painful is the fully established planted tank I had to gut to provide the hospital tank and the fully planted one he was in before transfer will need to be gutted in case I'm dealing with an infectious agent that is beyond my ability to control (he injured the growth in this tank so if any pathogens were released they will still be resident in the tank).

Hopefully I don't have to toss the plants or cull all the Red Ramshorn Snails from these two tanks.
A

Sorry to hear of his passing


X3NiTH said:
Thanks, just as painful is the fully established planted tank I had to gut to provide the hospital tank and the fully planted one he was in before transfer will need to be gutted in case I'm dealing with an infectious agent that is beyond my ability to control (he injured the growth in this tank so if any pathogens were released they will still be resident in the tank).

Hopefully I don't have to toss the plants or cull all the Red Ramshorn Snails from these two tanks.
Click to expand...

Most pathogens require a host for maintenance, depending upon type, the snails may carry some infectious agents ... or not
I’d start with a thorough cleaning/rinsing of all filter media - dispose any sponge type as it’s impossible to remove all debris (you could boil or bleach but this often alters the texture of the sponge)
Syphon any mulm etc from the tank
Frequent water changes - I’d try 70-90% daily for a week or so
You could also do some peroxide dosing (follow algae guidelines as usually plant safe)
Wait a couple months before adding fish

That should sort the problem
Not as “safe” as breaking down the tank and tossing everything, but if you’re wanting to keep the snails ...

You could replace the substrate, but not sure it’s warranted - unless you suspect infectious agents with multistage lifecycle, eg eggs or larvae present in substrate

Plants are unlikely to support any infectious bacteria, the “rinsing” from the water changes should remove anything
You must log in or register to reply here.