hongsit said:
but it always seems it can be tightened more.
Click to expand...

The seal between the bottle and the washer relies on the pressure applied by the tension of the nut. It’s difficult to explain this without being physically there but go tight. You shouldn’t be able to easily undo the nut without applying pressure to the wrench.

Think about the pressure coming out of the bottle, it needs to be sealed.

For the rate of Co2 loss from your first cylinder (days to empty) it’s highly likely it’s escaped from this initial seal.

Personally I get the nut nearly as tight as I want with the reg leaned back 90 degrees, then tighten with my left hand as much as I can until the reg is oriented vertically. There’s 900-1000psi trying to get out of that bottle.

I have no idea how strong you are. Advising a body builder to go as tight as they like and advising someone who could be blown over by a stiff breeze to go tight are two different scenarios. But your comment that it could be tightened more suggests it’s not tight enough through this forum medium. Go tighter and see if the problem persists.
However beautiful the strategy, you should occasionally look at the results.
H

Apologies for not being clear, but I was referring to the bubble counter and it’s cap, screwed that back on, tightened it, but it always seems to be able to go a little more.

Ah I see. Read the post again. My mistake.
However beautiful the strategy, you should occasionally look at the results.

Firstly did you email Karol?
A lot of what @Geoffrey Rea says is spot on but there's so much in the system and an order to follow troubleshooting what you have first.
Just asking but do you have a little black rubber washer between the regulator and bubble counter? It doesn't seem to have come up from what I see.

Going right back to the start; maybe first would be to check the system upto the precision needle valve which would include the connection to CO2 cylinder but also ensure the main body connections, adjustment knob and gauges are not leaking and that would simply be turn off the solenoid, turn off the precision needle valve and leave things for 24-48 hours and just keep a track of the pressure gauges.
Cloudy Sky

You can easily check the seal between your regulator and CO2 bottle, I generally do it every time I change my bottle.

Make sure CO2 solenoid is off, open CO2 bottle (handle/valve) and ensure bottle pressure is 800psi/55bar 'ish. Make a note of this value.

In the morning bottle pressure should be whatever it was when handle was open, if not then you have a leak.
H

Well this is interesting, left it yday around 6bps reconnected everything but switched off the powerhead. This morning at 8:45 the drop checker was near lime green and PH was measured around 6.86. The PH at 2am was 7.55.

I’ve emailed Co2art and sent them a lot of pictures and videos but the last email they asked how long my powerhead was running for which triggered a thought. I found a post on this forum (unfortunately don’t have the link), where the OP pretty much had the same issue, apart from he had an in tank diffuser. But he also had a power head at the opposite end, outlet front left, powerhead rear right.

He moved the power head to the same side as the outlet and moved the diffuser under the inlet and he managed to get a 1 point PH drop in 3hrs. If I remember, before he struggled to get a 1point drop at all, drop checker just about turned lime green at the end of the day.

So i switched off powerhead last night hoping for some improvement and I certainly got some.

I have to head into work but as an experiment I’ll have exactly the same setup but switch the powerhead back on tonight and see what I end up with, won’t touch anything else.

Think I’m not the right tracks, I have yet to reply to their last email but Co2art definitely help trigger a thought and I got a feeling that’s where they train of thought is heading. I think distribution is at least part of the issue.

Thank you all, will update when I can.

Andrew Butler said:
do you have a little black rubber washer between the regulator and bubble counter? It doesn't seem to have come up from what I see.
Click to expand...

Are you talking about the bottom end of the bubble counter? If so I have not taken that apart, It just screws on and off, nothing else there. I’ll take a picture when I’m back home.

Even though there’s a good improvement by switching off the powerhead it’s still taken 7hrs to get a 0.7PH drop.

hongsit said:
it’s an Ehiem surface skimmer upside down without the skimmer bit.
It’s only rated at 350l/h but it improved the circular flow. But to be honest I’m not sure I need it, so I’ve switched it off for the time being.
Click to expand...

hongsit said:
So i switched off powerhead last night hoping for some improvement and I certainly got some.
Click to expand...

hongsit said:
yes sticking to changing one thing at a time where possible
Click to expand...

If you're changing lots of things at once as you seem to be you're just complicating things, I know I'm losing track of where you're at so try sticking to one thing as you said.


hongsit said:
Are you talking about the bottom end of the bubble counter? If so I have not taken that apart, It just screws on and off, nothing else there. I’ll take a picture when I’m back home.
Click to expand...

There should be a little black rubber olive that sits on where you screw the bubble counter onto the regulator. I've taken a photo but it won't download right now so I can't show you.
Cloudy Sky 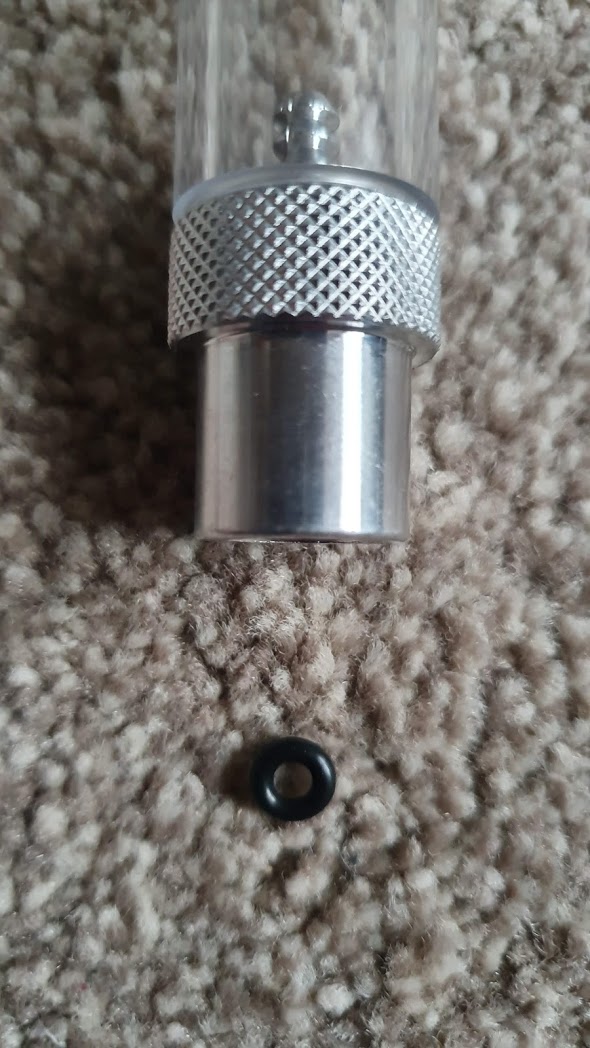 I see from the pic of your setup that you are running this diffuser at 50psi, this pressure is way too high for this device. The CO₂Art diffuser is a rebranded Qanvee device, from experience it needs only between 20psi to 25psi to function correctly and using a higher delivery pressure can compromise the internal seals of the device and allow large bubbles of CO₂ to escape around the sides of the ceramic part of the diffuser and not be diffused.

Use the dial on the front of this dual stage type regulator to turn down the pressure.
Aquatoon - Planted CRS Tank
H

Andrew Butler said:
Not got the regulator included but here we go............the little black olive should sit on the regulator before the bubble counter screws on top of it.
View attachment 129003
Click to expand...

Right start from fresh.
Yesterday I reconnected everything checked leaks, in particular recut the co2 tubing, as the original cut was with scissors. I also stopped the powerhead.

However I will start powerhead so the only change is the co2 tubing has been recut and reconnected. Will report back tomorrow morning on this. Everything else the same co2 start time and will take PH at 9am.

X3NiTH said:
I see from the pic of your setup that you are running this diffuser at 50psi, this pressure is way too high for this device. The CO₂Art diffuser is a rebranded Qanvee device, from experience it needs only between 20psi to 25psi to function correctly and using a higher delivery pressure can compromise the internal seals of the device and allow large bubbles of CO₂ to escape around the sides of the ceramic part of the diffuser and not be diffused.

Use the dial on the front of this dual stage type regulator to turn down the pressure.
Click to expand...

Really, the manufacturer spec says 30-40psi.
The current psi is around 44, my regulator can’t go up that far. Will turn it down after doing the other test, need to make sure I change one thing at a time.

hongsit said:
Bps around 6-7 hard to count.
Click to expand...

If you camera/phone/computer can do it; film it and play back at half or quarter speed for easier counting.
H

Just did slow mo video against a timer on my wife’s phone. 10bps it seems not 6.

Will stop power head now and retake in 1hr.

Geoffrey Rea said:
One other alternative is gassing off, this isn’t to insult your intelligence but I have to ask if you’re running any aeration? I’m careful to not presume anything these days.
Click to expand...

- the amount of light (increased light leads to the potential of increased uptake of carbon from Co2 during photosynthesis).

- temperature has a huge influence on how much Co2 can be dissolved into water. See Henry’s law; when any gas is in contact with water, some gas will dissolve in the water. The amount that dissolves at a particular temperature depends on the pressure, or partial pressure, of the gas. Water is densest at 3.98°C. Lowering the temperature closer to water’s densest state (from say 25°C to 22°C increases the efficiency with which you can dissolve Co2 into water).

A bit off tangent but this is why the oceans serve as a huge sink for atmospheric Co2, but this is becoming less true due to changes in acidity levels.
However beautiful the strategy, you should occasionally look at the results.
H

That makes a lot of sense. Thanks.

Ffs! So stupid. The PH pen was new and didn’t need calibration. Just recalibrated and the PH reading is now around 6.7!

Will take reading tonight after co2 off and see what the starting position is.

Gonna step away from this for a bit as this has got me a bit annoyed and it’s not what I want this hobby to be about. Takes effort to get something nice and I’m willing to put the effort (and money) in but it’s stuff like this that annoys me so will take a breather, pop out to the cinema for some mindless entertainment (terminator) and start my readings again tonight.

I know I should of calibrated the pen at the start so I have a known position, as I said learnt my lesson.
You must log in or register to reply here.
Similar threads