Decided it was about time to do something different with the tank and after growing a jungle style scape, I decided it would be an interesting change to do something slightly more aqua-scape like, than just a lot of plants growing.

Specs for the tank:


This is a picture of the old tank just so you can get to grips with what it was like before. 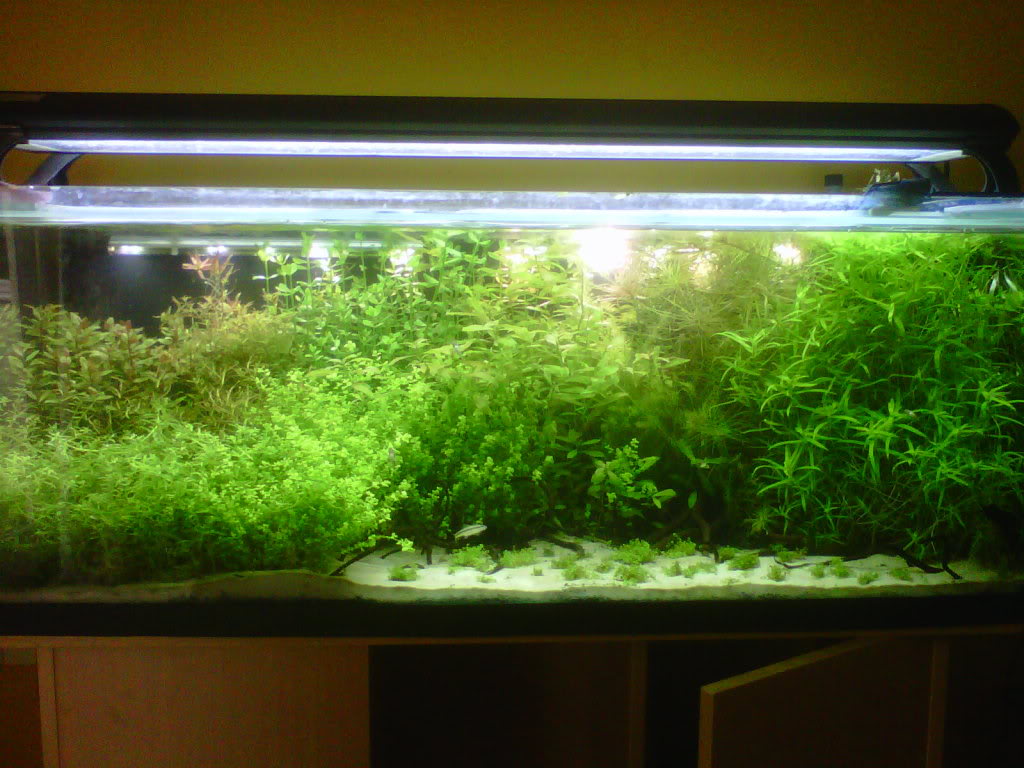 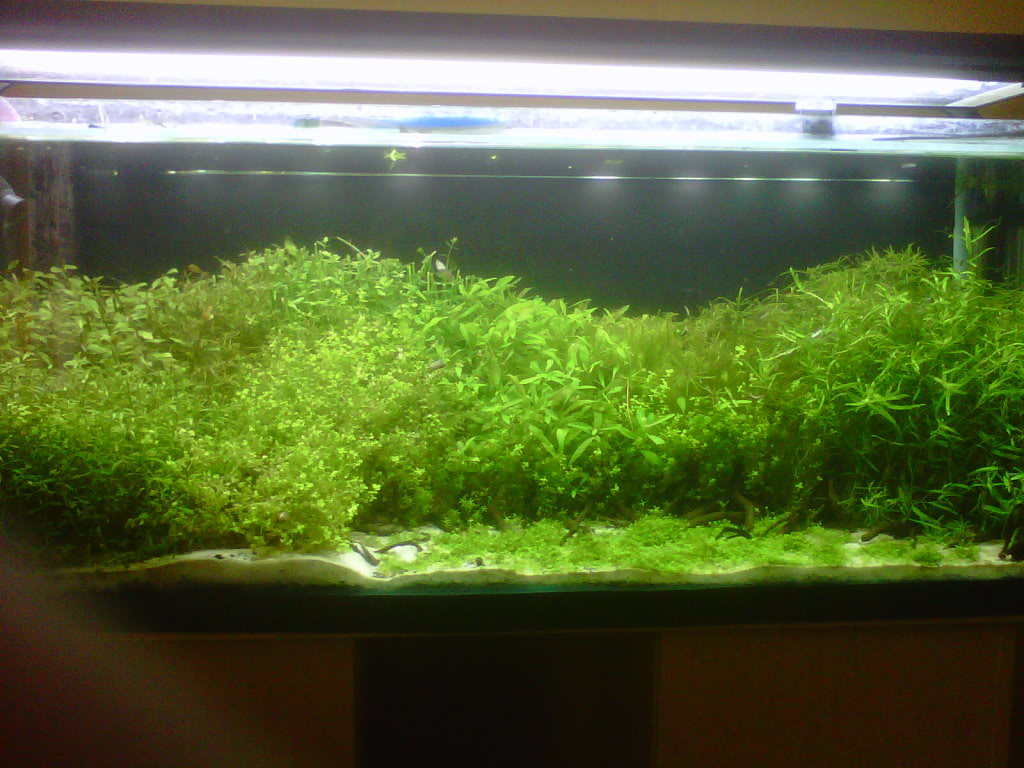 After spending some time trying to gain some inspiration for what the tank was going to look like, I decided that I would like the main aspect of the tank to be a large piece of wood (preferably red moor) to be reaching from one side of the tank, to the other, hence the name "Reach". Eventually I found two pieces, which could be combined, that I liked on ebay and bought them. It was also decided that there should be a sand topping as in the previous tank the substrates became mixed and looked very messy.

Here is a picture of the wood in the tank with Peacock moss attached to it. The White things are polystyrene which I used to build up the substrate on the left hand side. (Sorry about the picture quality, this photo and the next one were taken on my phone, all the rest of them are taken with a good camera) 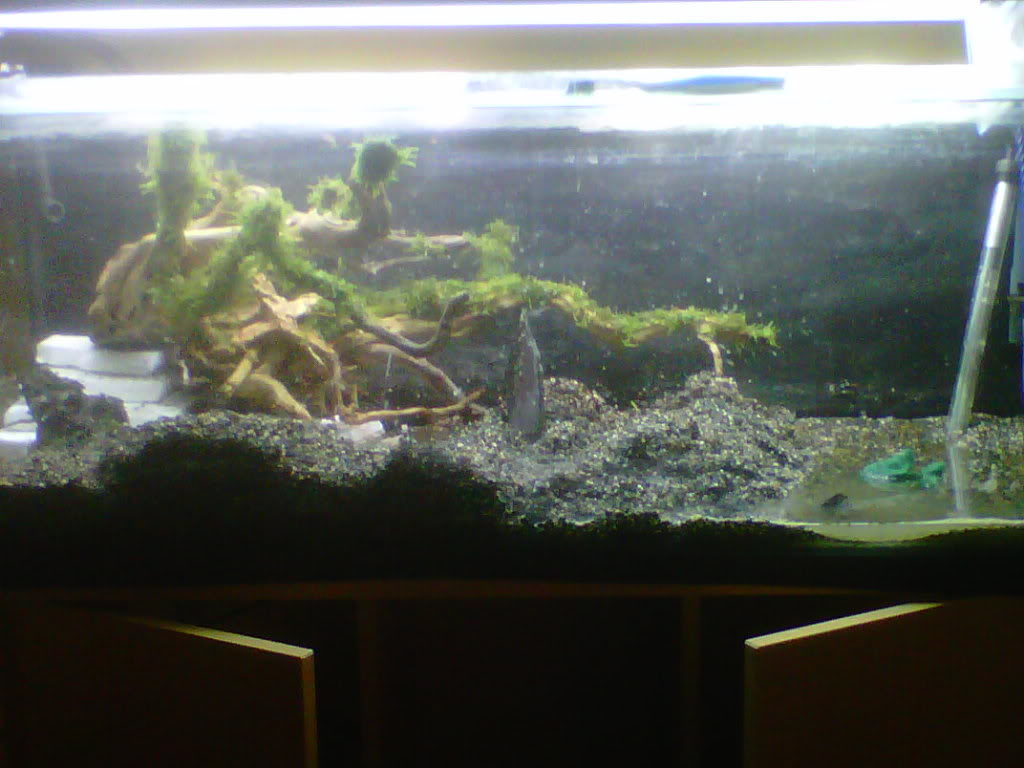 And this is after the sand was laid down and everything was in its finished place. 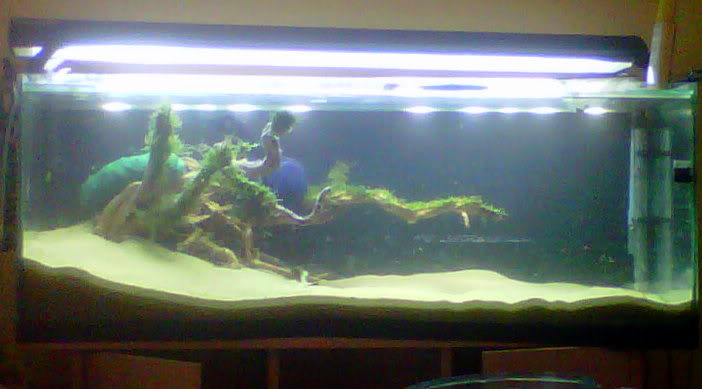 Decided to plant Eleocharis Parvula as the carpeting plant as it is fairly low maintenance in comparison to HC and Glosso, and I have also never grown it before so it should be an interesting experience.

Just before planting the hair grass, I added 25 new Rummy Nose tetra, and from the instant they were added to the water, they all went into severe shock. This is because my heater and thermometer had packed up, and the CO2 levels must have been a shock for them. So after about 20 minutes of frantically heating up the water and aerating the water, they all turned over from their backs and began to look less lethargic.

Now they are all very happy and are swimming about in a big shoal!

Back to the plants, so all of the hairgrass is planted now! It took absolutely ages but hopefully it will all pay off when it carpets! Does anybody have any tips/tricks with hairgrass in terms of carpeting and how long before runners start to appear?

Heres a picture of the tank today : 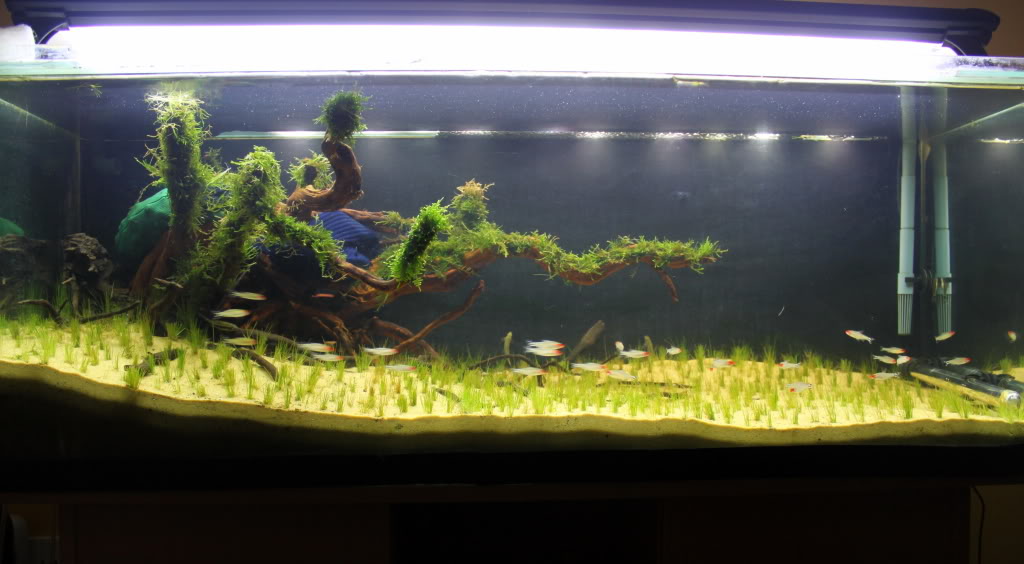 Will be adding Hydrocotyle sp. Japan around the wood to help it merge some of the harder shapes.

Will keep you updated with pictures and news shortly!

Any thoughts at all would be welcome!
My 240l re-scape "Reach"

Thats going to be a great looking tank when it carpets

Really like the wood. Are you adding any stems/ height at the back or behind the wood?

Making the effort and taking time planting the parvula will payoff soon. I think most advise to trim it hard when it's planted to encourage it to spread.
High Tech Rio 125 - Rio 125 Rebooted, Dutch Style


awtong said:
Really like the wood. Are you adding any stems/ height at the back or behind the wood?

Thanks. I will be adding some height at the back of the wood, but I think I will wait until the socks that are weighing the wood down are no longer needed, this way I'll be able to get a better feel of the entire tank. Just need to wait a couple more weeks or so until the wood is waterlogged.
My 240l re-scape "Reach"

Hi Ed. That first jungle scape is crazy, looks really natural. Great start to the journal as well, loads of detail which everyone likes. The hairgrass in the sand looks nice and you have leveled the sand nicely, some parts higher than others. Rummy Nose on the black background work well to. I cant help thinking when looking at the scape that the wood may look better positioned slightly to the right to draw the eye across the whole tank more than just into the left corner. It would also allow you some room to plant some stems as you mentioned in that corner. I havent seen a hairgrass carpet that big on here before though so can imagine thats going to look really nice especially surrounding that mossy wood. Looking forward to watching this one develop.
60P IWAGUMI Mountain Scape
Relatively low-tech 30 Cube

Thanks for your thoughts guys!

Emyr: I did have the same thought as you, but after spending a good few hours reshuffling the wood and substrate around, I felt that it was probably best left where it was. This is because the back of the wood has large cuts in it which look very unattractive. And for the other reason that the tank was aiming to be as low maintenance as I could make it, and so alot of stem plants would make it difficult, considering the speed which they grow at. The aim for behind the wood possibly some Eleocharis Vivipara. But for the time being I think I wont make any decisions until the wood is ready for the socks to be removed.
My 240l re-scape "Reach"

The contrast between the moss and the hair grass will be really nice when that has grown in - love the slope of the sand too - hope it all grows in nicely!

Also have planted the Hydrocotyle tripartita 'Japan' around the base of the wood and the tank is also really starting to take shape!

Heres a couple of pictures just to keep you guys in the loop! 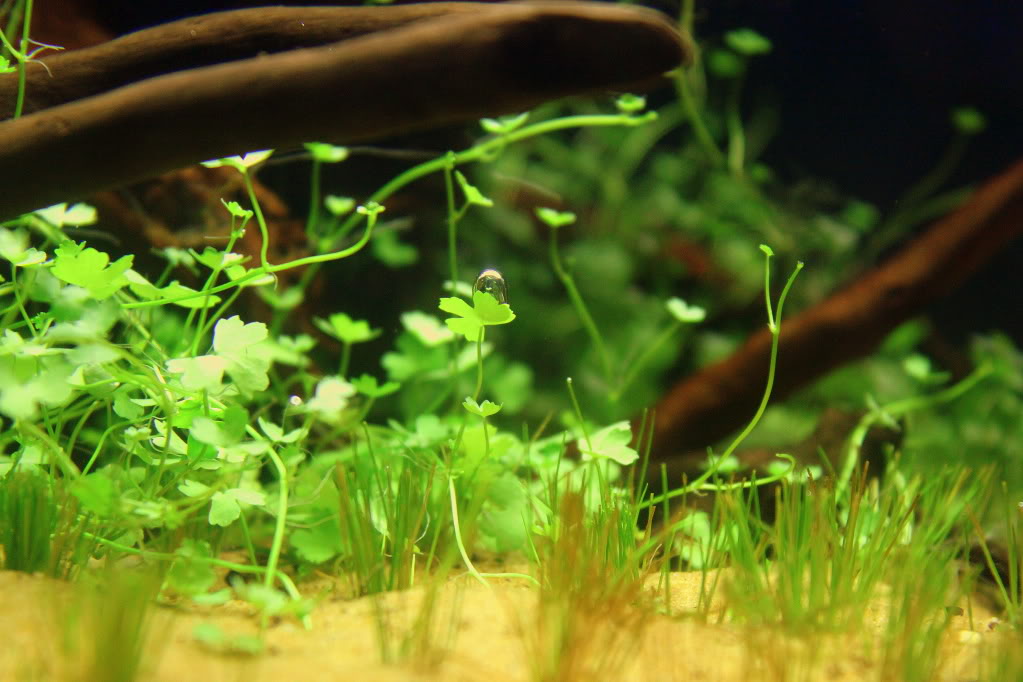 And a full tank shot

And for anyone who is interested in what my kit looks like with my old JBL 500g tank and my new 6kg CO2....bit of a size difference... 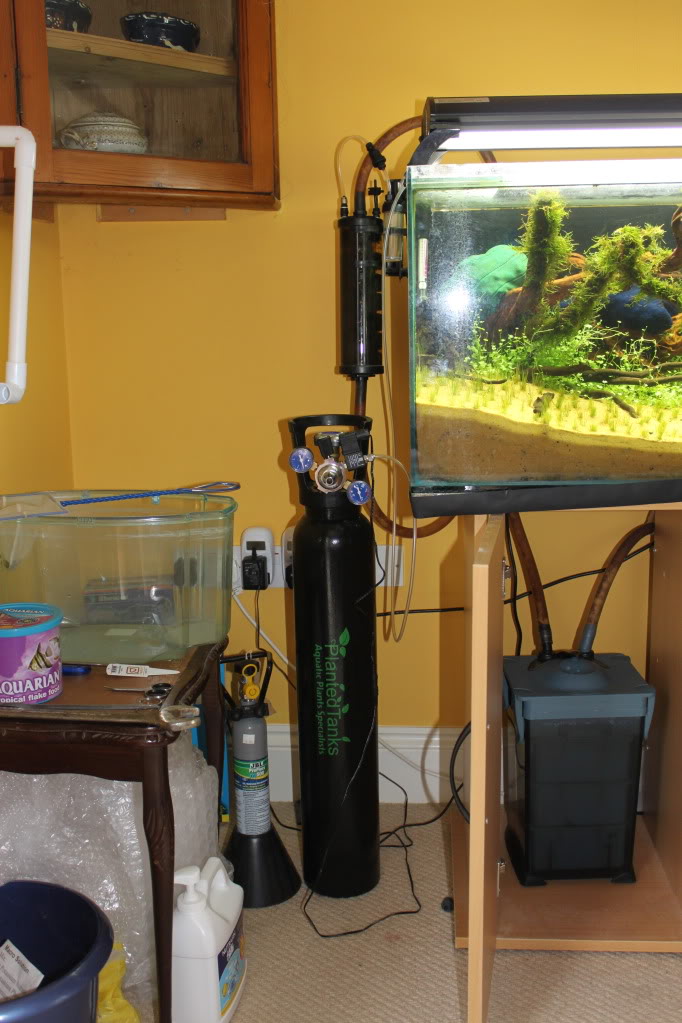 Hi Ed, I love the lush plant growth of your jungle tank. You can clearly grow plants! With that nice bit of redmoor i sure your new tank is gonna look pretty special. I'v got the same sized tank arriving on monday and had similar plans to have redmoor on one side with a whole lot of hairgrass, but having bought the wood my plans have had to changed slightly. What i'd like to know is how many pots of hairgrass did it take to fill that space? Also I notice you have a 'planted tanks' co2 canister, have you bought plants from them and if so what were they like?


Tomfish said:
What i'd like to know is how many pots of hairgrass did it take to fill that space? Also I notice you have a 'planted tanks' co2 canister, have you bought plants from them and if so what were they like?
Click to expand...

I actually bought the majority of the hairgrass from my LFS in bunches and then purchased 4 pots on ebay. I'd say that 3 bunches would make up a pots worth, so all in all it would take 10 pots to plant the carpet. Runners are already popping up after a week so hopefully it should start to take shape soon!

Also I haven't bought plants from Planted Tanks but I have bought the tank and my EI Dosing kit from them.
My 240l re-scape "Reach"

I have recently given the hairgrass (HG)a fairly short trim, and now some of the HG is turning brown?

Does anybody know why this is?

My drop checker is always light green and I have been dosing according to my previous calculations.

Any help would be appreciated
My 240l re-scape "Reach"

For anyone who’s interested in a little 1 month update, here it is;

Everything has been growing in nicely, have had to tinker with the lighting times and have dropped it down to 6 ½ hours a day. This is because the HG and Hydrocotyle sp. Japan were looking slightly burnt. The change in lighting seems to have helped, may continue to tinker with it until its working well.

Also taken the socks off now as the wood is nice and water clogged! Looks alot nicer now.

Have also added about 20 Amano Shrimp to hopefully help tackle a bad outbreak of hair and thread algae.

If anyone knows any good methods to getting rid of the algae that would be a lot of help!

So here are a couple of pictures for you: 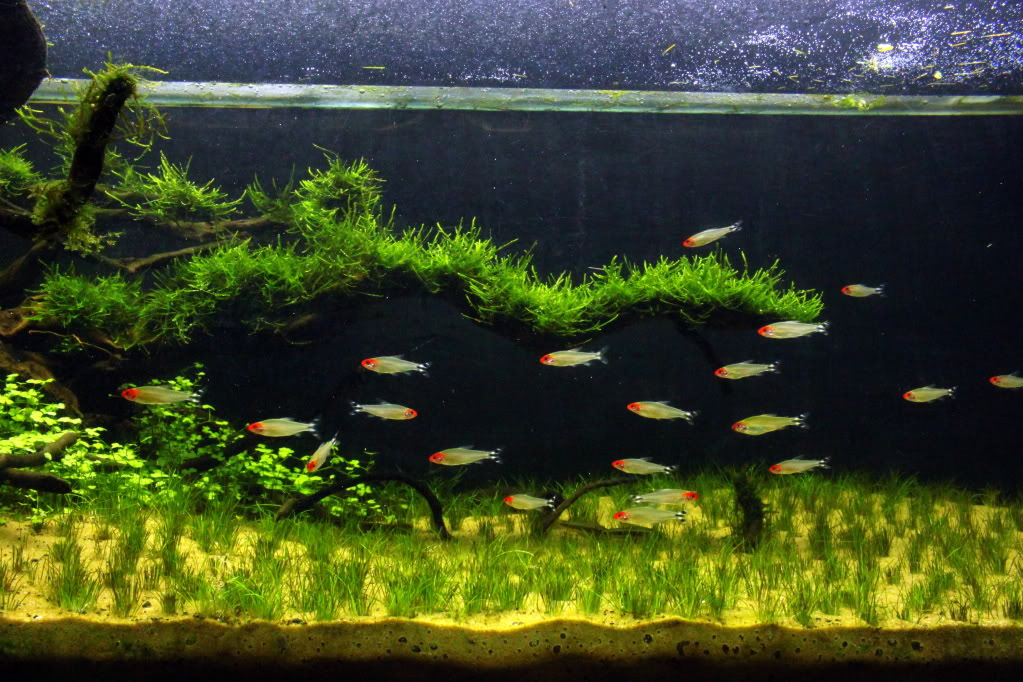 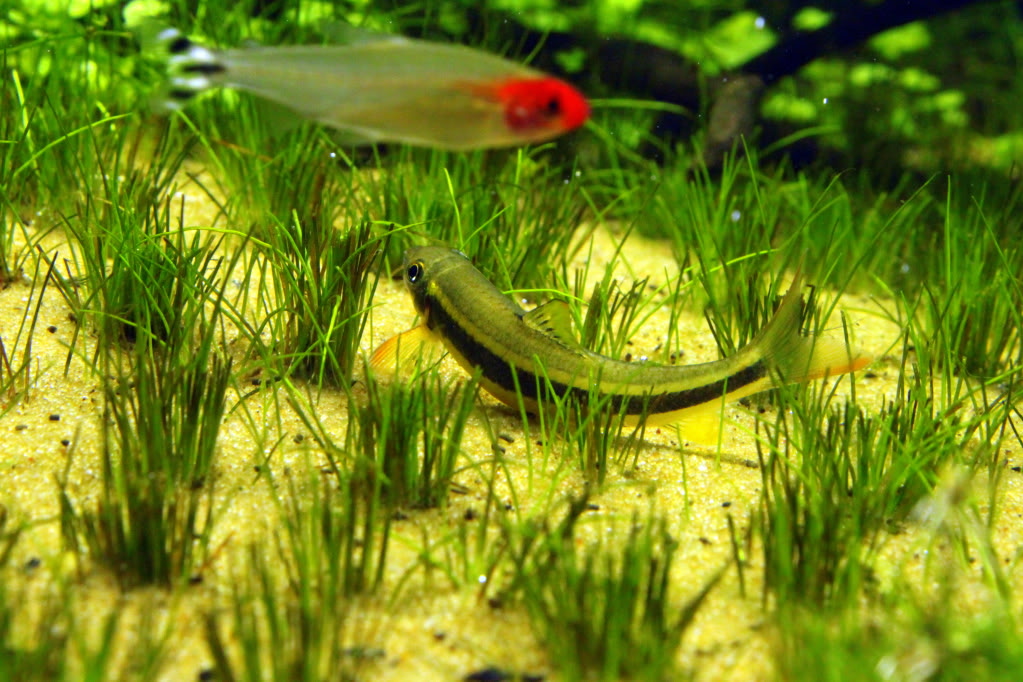 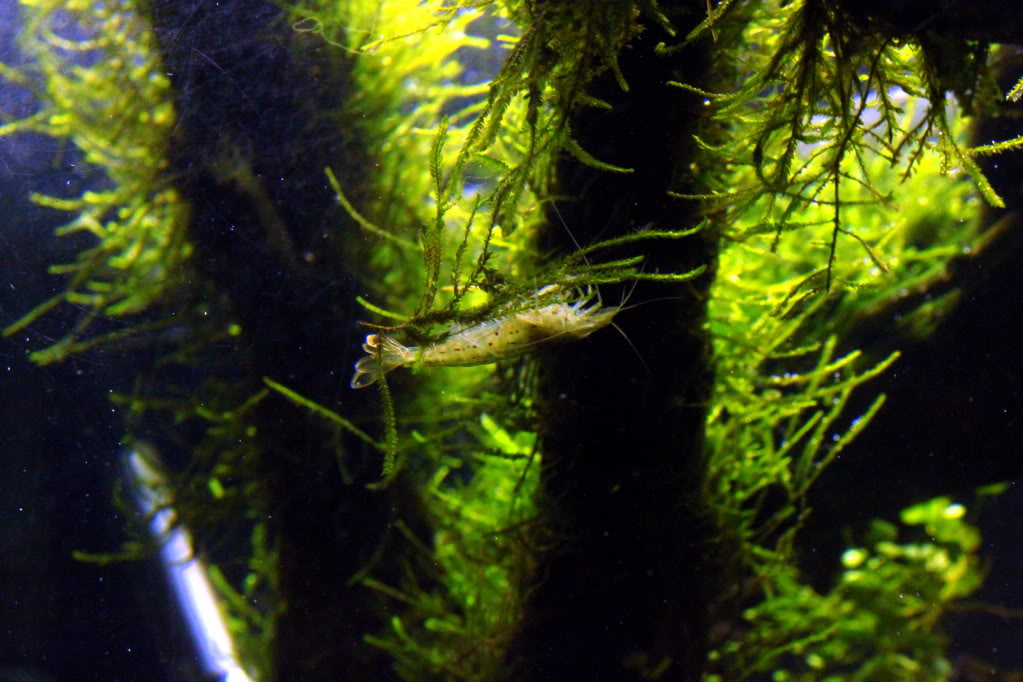 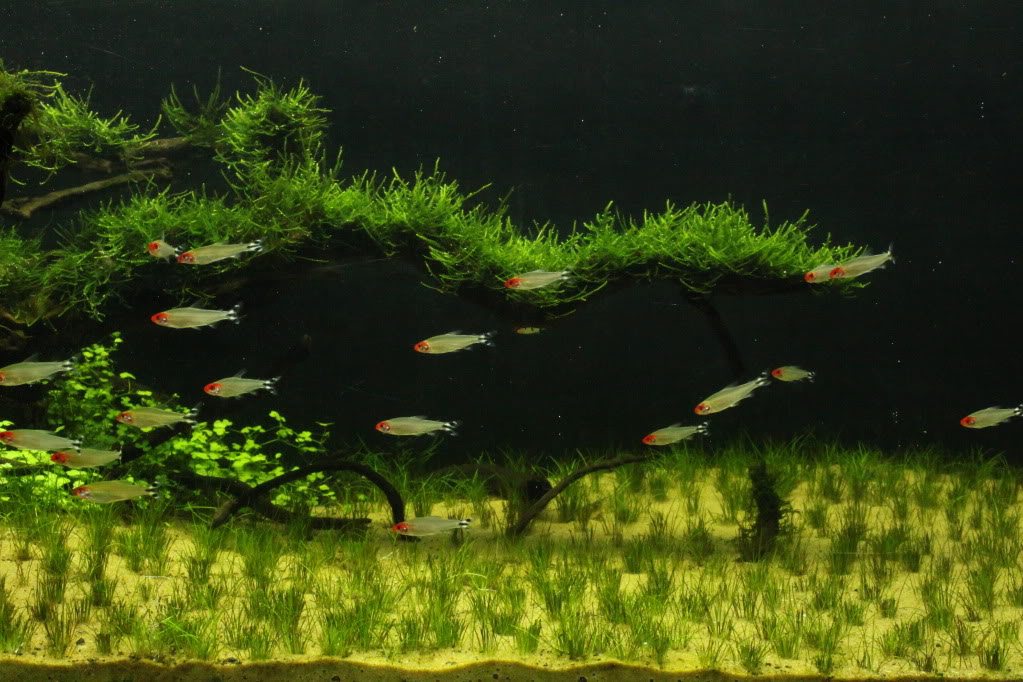 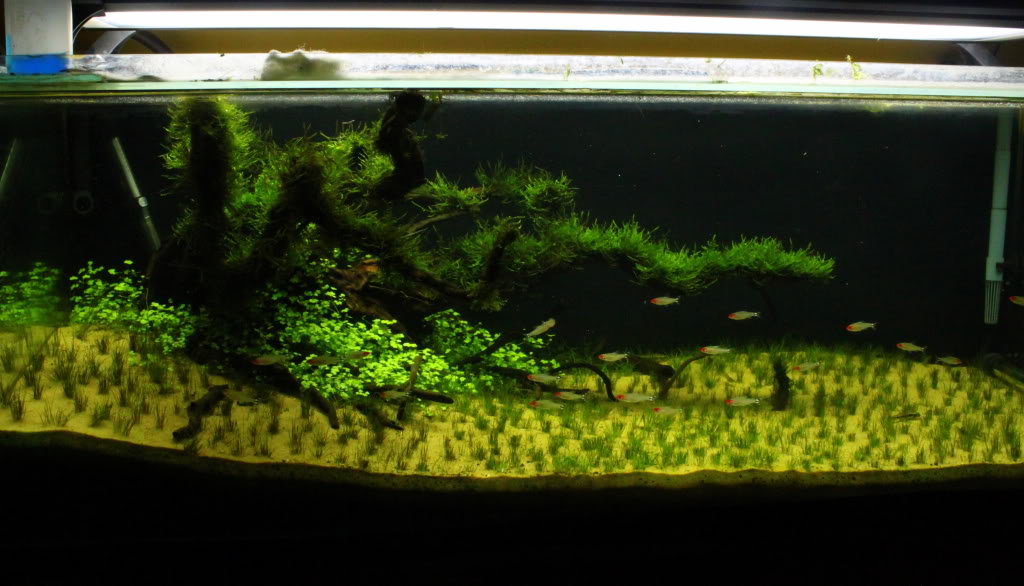 The rena xp 3 is obviously doing a great job of taking care of the flow.
I am not sure if I should be asking this but could you be kind enough to show us how far the water jet from your spraybars go when the tank's half full during the water change? Do they hit the front glass of your tank?

The hairgrass carpet is looking lush and the whole thing is going to look awesome once things settle in.
Faizal

This is a lovely looking tank. Nicely proportioned and I really like your layout. I'm glad you have rummy noses in there too. I'm getting some for my tank and wasn't sure how many. Now I know!


faizal said:
The rena xp 3 is obviously doing a great job of taking care of the flow.
I am not sure if I should be asking this but could you be kind enough to show us how far the water jet from your spraybars go when the tank's half full during the water change? Do they hit the front glass of your tank?
Click to expand...

The XP3 actually was struggling a little bit as its flow was massively hampered by the external reactor,soooo...... I've added another XP4 as I was having some flow related issues.

Will post a picture of the new set up soon, as I have added lily pipes which I am particularly proud of

Thanks for your kind words! Its coming along nicely!!
My 240l re-scape "Reach"

browning off is usually die back post trim. Did you use very sharp scissors? Looks great by the way. Savannah
darren reserves the right to go off-topic

I do, but am thinking about investing in some proper carpet scissors as its abit of a pain at the moment!
My 240l re-scape "Reach"

That is looking stunning! Can't wait to see it with that carpet grown in fully!


Sent from my iPhone using Tapatalk
You must log in or register to reply here.
Similar threads