I have this journal as well as a physical one Do you reckon I need a third?

Yesterday knives were feeling quite good at feeding time, Big boy was out eating chopped bloodworm for a record amount of time, along with the medium and extra small knife. They looked perky and I saw one flash its gills against the sand only once. I tried taking pictures but they all came out quite blurry unfortunately.

I decided earlier today to go ahead with a third course of Praziquantel. My reasoning being that a half finished job with parasites is not good when it comes to resistance, and because of still seeing that flashing yesterday. I decided to go with a dose of 2,5 mg/l instead of 2,0 mg/l. This is to be more in line with the dosing ive read online as being most effective, and the same dosing as PraziPro. PraziPro seems to come highly recommended on many sites, but this particular product is not readily available here. I should have dosed yesterday actually, because apparently 5 days between treatments is the ideal time for a temperature of 25 C. Hoping 6 days will also be ok

I just tried to feed them and the knives are not feeling well. They were not interested in bloodworm and quite listless. They wanted to go right back into the sand.
Its very clear to me now that they either dont appreciate this medication, or something else is bothering them. My forgetful self didnt put an air stone in the tank when I dosed earlier today, but they have two airstones going at full blast now. I read somewhere that a lot of medications use up oxygen in the water, so im almost hoping this is why they arent feeling so sharp. Oxygen would be at the lowest levels down in the sand where they are most of the time. I will monitor them for the rest of the night and have filled the waterchange barrel incase they need an emergency water change later.

Just checked on the knives, Big boy was the one I found first in the sand. He seems to be doing better. Sniffed my hand for a bit before returning to the sand. Fingers crossed they just needed some oxygen. I will leave the medication in the tank until tomorrow, unless my last check before bed shows anything else.

Yesterday I changed 75% of the water as planned, meaning the Prazi was only in the tank for ~24 hours for this third and last treatment. I felt it was the best course of action since im so unsure what is going on. Later that night three of the knives came out for bloodworms, and while they did flash quite a lot, they had good appetites and activity levels again. The XS knife was even out and about for a solid 3 hours, as every time I checked on the tank I saw him swimming around rooting up worms.

Im now giving the fish a solid period of just clean water with no fussing for a while, just to see if things will stabilize a bit. I did read that fish may flash during and a little bit after fluke treatments, as the flukes have damaged the gills and it needs to heal. I dont know. None of the other fish seem sick or are itching themselves, so its oddly specific to the knives. Then again they are wild caught. 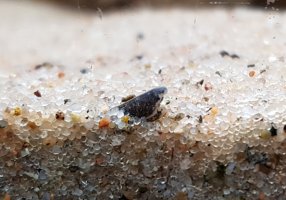 The death count on shrimp is now above 11. None of the newborn shrimplets or juveniles are affected, which is typical for molting issues. I thought I had the problems mostly sorted out when I was able to do 50% water changes once a week, a regime that would make many shrimpkeepers scream in terror. But 50-75% water changes three times a week seems to have been too much for some of them.
In the back of my mind is the possibility that they are dying from water quality issues, but it doesnt make sense that I find so many newborn shrimplets and have fish fry up to my ears if the water is bad enough to kill 11+ adult shrimp.

The Rineloricaria's (grey fishsticks) second brood started hatching today. It may take 2-3 days for all the eggs to hatch.
In the first brood only two hatched, one struggled too much getting out of the egg, and sadly the other healthy one was eaten by a venezuelanus cory

This morning I met one of the first in this batch, casually chilling on the glass front of the tank.
Perfect timing for this little guy, as I rehomed all the adult venezuelanus corys. Theres only a few of their fry left, and they will be taken to the LFS once they get bigger.
I dont regret rehoming the big corys, while I really like the species, feeding time is noticeably much calmer now, and it will be much easier for all manner of fry to survive in the tank without the big boisterous hoovers. 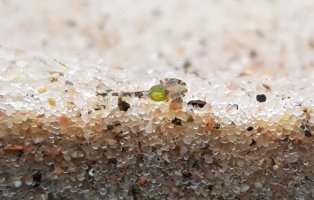 I added a few small bits of driftwood a day ago, and they are still floating around on the surface. Somehow, two stick fry have made their way up to them shortly after hatching. They seem to really like it up there. They are impressively camouflaged. 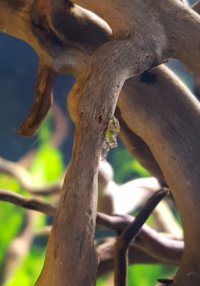 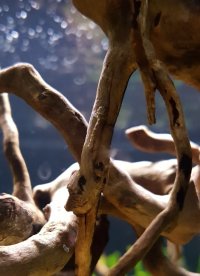 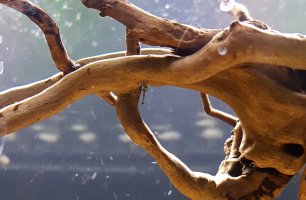 Plant health is alright, they are kinda taking a B role right now with all the fishy business going on. 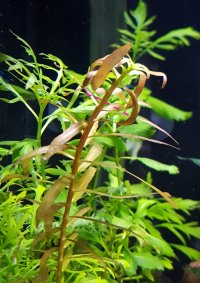 My lone stem of crassicaulis is doing something weird, the leaves were growing straight and fine for a good while, but then after the pink dotted line on the image, they started growing curly and strange. I cant remember if I moved the plant slightly around that time, or if I did anything else that could affect it. @rebel said I should keep a journal, and I sort of jokingly responded that I have two already. But jokes aside, I could get a lot better at writing down more things and smaller details, especially since Ive had some memory issues this year, and its not exactly getting any better. I would have to be both disciplined and consistent to do that though, definitely a weak side for me

Here is a really shoddy whole tank view. Im gonna let you guys in on a secret, its a real pro-tip actually. If you take a really blurry picture, from a decent distance away, no one will be able to see your algae. Dont tell anyone about this though

I added some more oak leaves to provide surfaces for the fry to graze and for them to hide amongst. 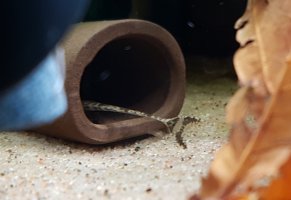 The fourth grey fishstick appears to indeed be a male, he has been cleaning the second cave on and off. The little blur near his tail is another cory fry.

I dont think I mentioned it, but I got four of both kinds of fishsticks in the aim of having a pair of each. So two will be sold off once I have a good pair. For the grey sticks, this took no time at all, while for the brown sticks I assume they need to do a whole lot more growing before I will be able to tell the genders. The brown sticks may prove to feel slightly too big for my tank once they are absolutely full grown. I do prefer the look of small fish in big tanks. But I will see when I get to that point. There should be no issue for the health of the fish, its just my sense of aesthetic. A full grown pair of Sturisoma (now Sturisomatichthys) is very easy to sell 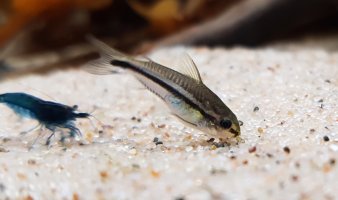 C. pygmaeus has gotten conditioned in record time. I expect they may start to lay eggs soon. 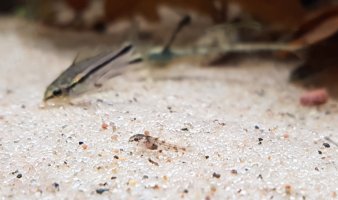 Bold little venezuelanus fry. Pretty much nothing in the tank will hurt him now, and he is not afraid to get his share of food.

Lastly, the gourami has had a grand old time today playing in the bubble stream. She enters from below and then lets the bubbles carry her up and away.
Shes spent the good part of the afternoon playing like this. Ive not seen her this happy in a long time

I will write a post about her at a later point, this post is getting too long. So instead I leave you with this picture collage. 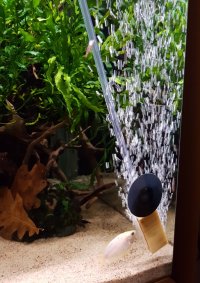 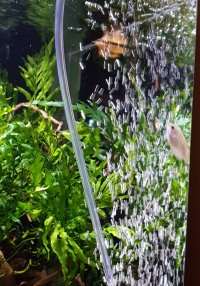 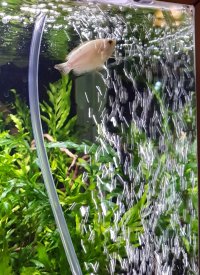