So I decided to get a new tank. Admittedly this was a while back and I've just been lazy posting this journal. The tank was to be in my room, opposite my bed on my chest of drawers. I wanted to try out open top and get a lot of emersed growth going and my bank balance decided on a smaller sized tank; more to spend on plants and food. The vague plan was oversized plants at the back, bolbitis for the midground and a couple of foreground plants I wanted to try out. So more of an experiment than a true display tank but I'm aiming for to look good. Low tech, I have no real interest in high tech.

Apologies for the rambling and the water spots.

I ordered from NACD Aquariums a 4mm glass 400x250x250 for 30 quid. Not perfect silicone work but very happy for the price. The tank stands on bit of sample from a local carpet shop. 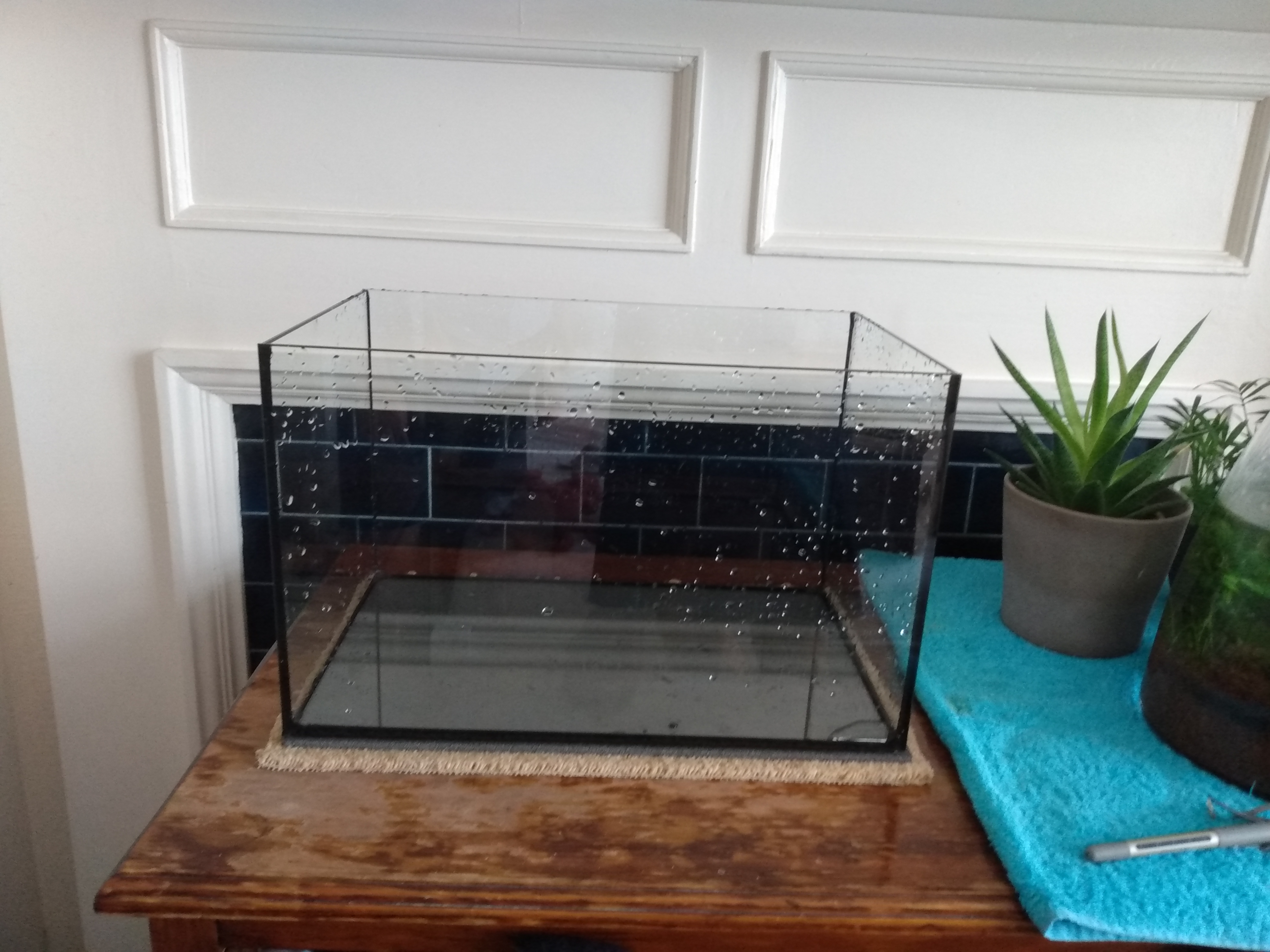 I went to a local garden nursery to pick up some rocks but could only find grit or small slate. I ended up spending some time digging some larger ones out of leaf litter, old stock which I got for 2 quid after some bemused looks. There was some blue slate I intended to use for this aquarium and some larger pieces for that bigger one down the line, that one I've been keeping that lovely redmoor on top of a wardrobe for a couple of years for...

Back at the ranch, here was the haul. Cracking deal, I'm not sure what the larger, more rounded stone is, I like the white veins and the texture of it though. 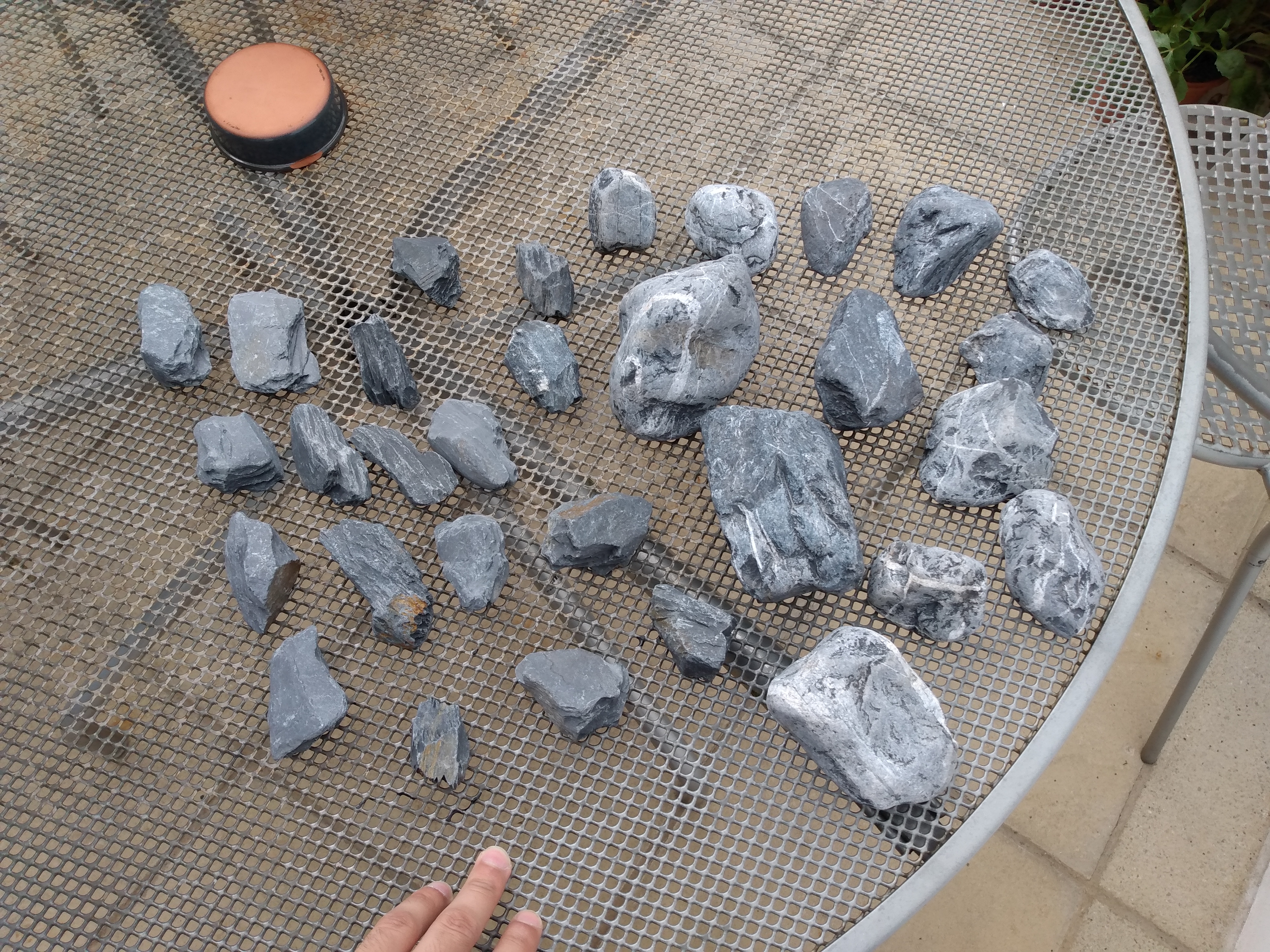 I ordered a bit of redmoor off ebay from tmaquatixltd. I wanted a piece that would just break the surface but would give epiphytes close to the surface the chance to really take off out of the tank. 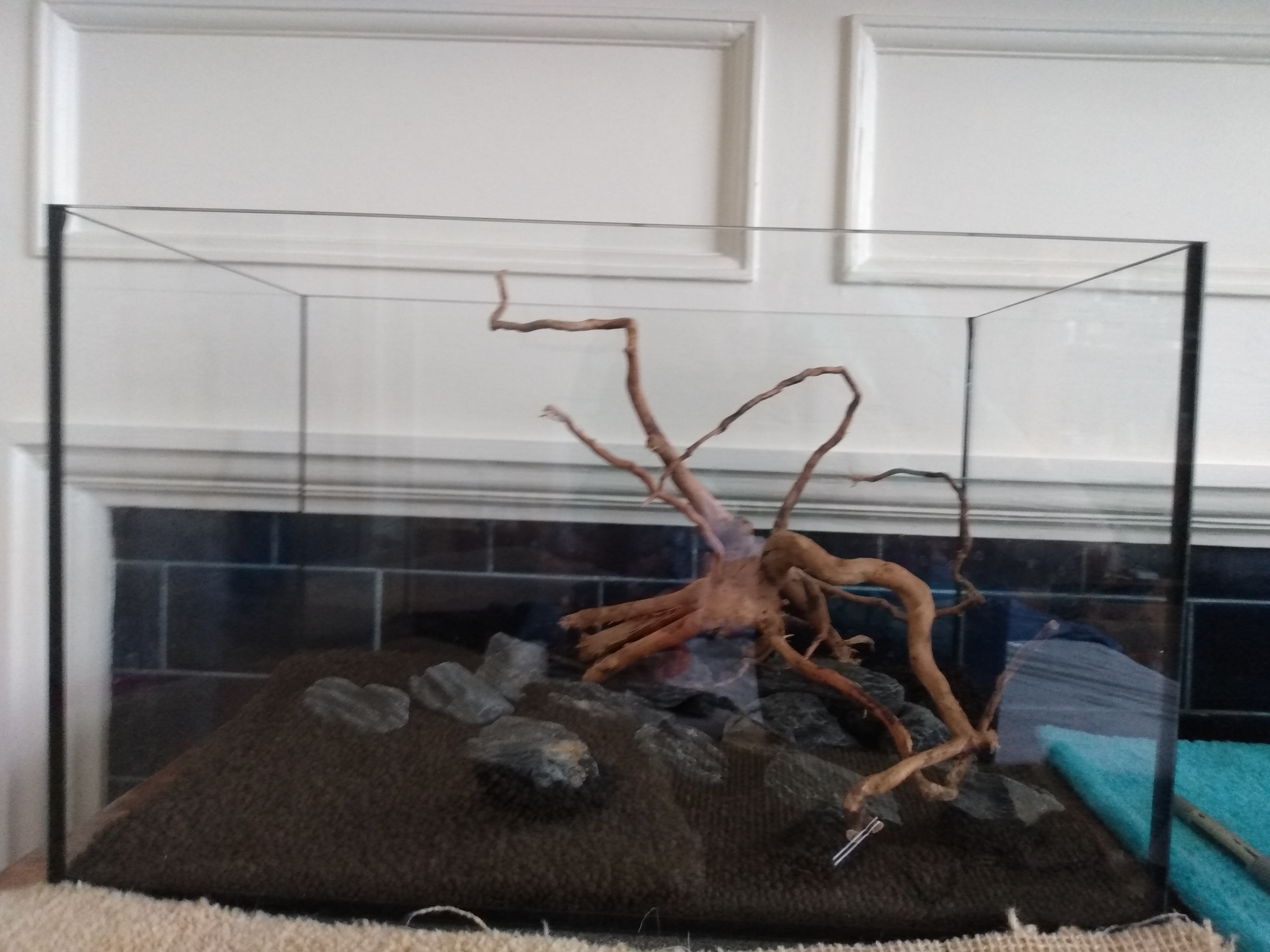 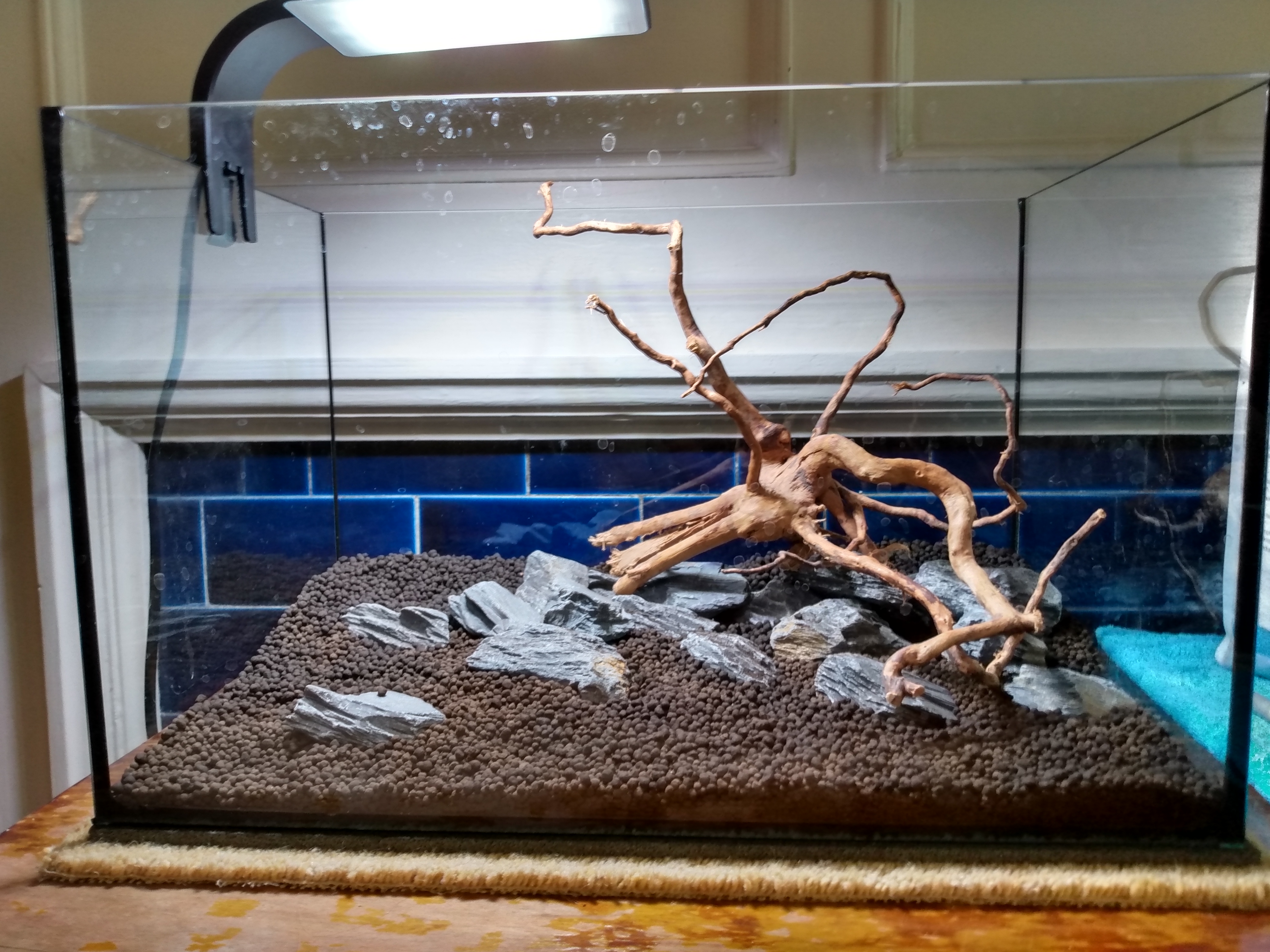 I ordered my plants online from planters-place on ebay, Plants Alive, and Aquarium Gardens. I'd have gone to my local shop but I'm a bit fed up with one of the guys there being a bit rude and the plant quality is inferior in any case. Plants Alive I hadn't used before but was pleased with, some really great deals and the plants were huge. The ebay orders are perhaps not as in vitro as they claim but the plants are good quality and I wanted those species smaller.

Alternanthera reineckii 'mini' - ebay. I'm not normally one for red (or pink) plants but was a bit curious how they would do in my set up. While I prefer the deep greens, I figured a splash of colour when I wake up couldn't hurt.

Eleocharis vivipara - Originally ordered from plants alive, they didn't have any. Got irritated by a piscine Basil Fawlty so went with ebay in the end. So far I'm not convinced it's vivipara so we shall see if it grows. I'm hoping it will at least reach the surface and potentially grow out of it, though perhaps it's too fine?

Hygrophila pinnatifida - ebay. Love the stuff, finally a chance to get it.

Littorella uniflora - Aquarium Gardens. This caught my eye, something I hadn't seen before, and I'm really liking it.

Murdannia keisak - Aquarium Gardens. Another new to me that caught my eye, I really like the bamboo style and thought it would be interesting to have that emersed. I'm not sure it fits with the general style but I don't really care, I see the tank as a few mini environments more than an overall scape.

Salvinia auriculata - Plants alive, not sure about this, looks too big to be auriculata which I have (Tropica in vitro pot) partially moved from my other tank in addition. Could just be the big greenhouses they must have at Plants Alive. You may well ask why did you buy more salvinia? It was 60p. Glad I did, it looks fantastic even if it doesn't survive in it's current form.

Cryptocoryne lucens - Plants Alive. I love crypts and this was a new one for me. There for the midground gaps.

Cryptocoryne parva - Plants Alive. One of my favourite plants (I'm actually quite impatient, weird). I like it in foreground borders.

Echinodorus paniculatus - Plants Alive. I wanted a nice emersed sword that my tank is far too small for. This was 78p. Never had a sword before so not too clued up on the differences between the species, the choice was far too much over various sites and my total was getting a bit high so this was the choice in the end.

I also scrounged some tiny anubias and bucephalandra from my other tank. More crypts may be rehomed in the future depending on how well the bolbitis and pinnatifida cover the stems.

After my previous failures with stems I said I wouldn't try them any more, they they are certainly more suited for high tech in my opinion (or at least, people that take better care of them than lazy blahblahblahblahblahblahblah exhibit A over here). I figured the emersed aspect though would be great and I'm half hoping that bacopa and murdannia will flower one day.

The Hydor seems good, quite quiet considering I don't have it in a cabinet and provides a good flow. I have it on a bit more of that sample carpet. Sponge, floss and ceramic rings contained nicely in a basket that's easy to lift out without spilling water all over my room. It's probably a bit overkill for the tank but I prefer not seeing the filter in a tank and wanted some circulation.
I had some issues fixing the inflow/outflow to the glass but eventually worked down some acrylic pipe holders to a size just about small enough to hold them in place. This involved a misguided attempt at melting it down with a soldering gun before bringing out the coping saw, files and sandpaper. Unless you're looking for it, you can't see how badly I mauled the job.

For a light, Aquael's Leddy Smart 2 Plant LED 6w. Saw a recommendation for it on here and liked the aesthetic so went for it. Seems good so far.

Planting went as orders came in, so clingfilmed the top with frequent mistings until I flooded. Bolbitis and pinnatifida were tied onto the wood with cotton thread. 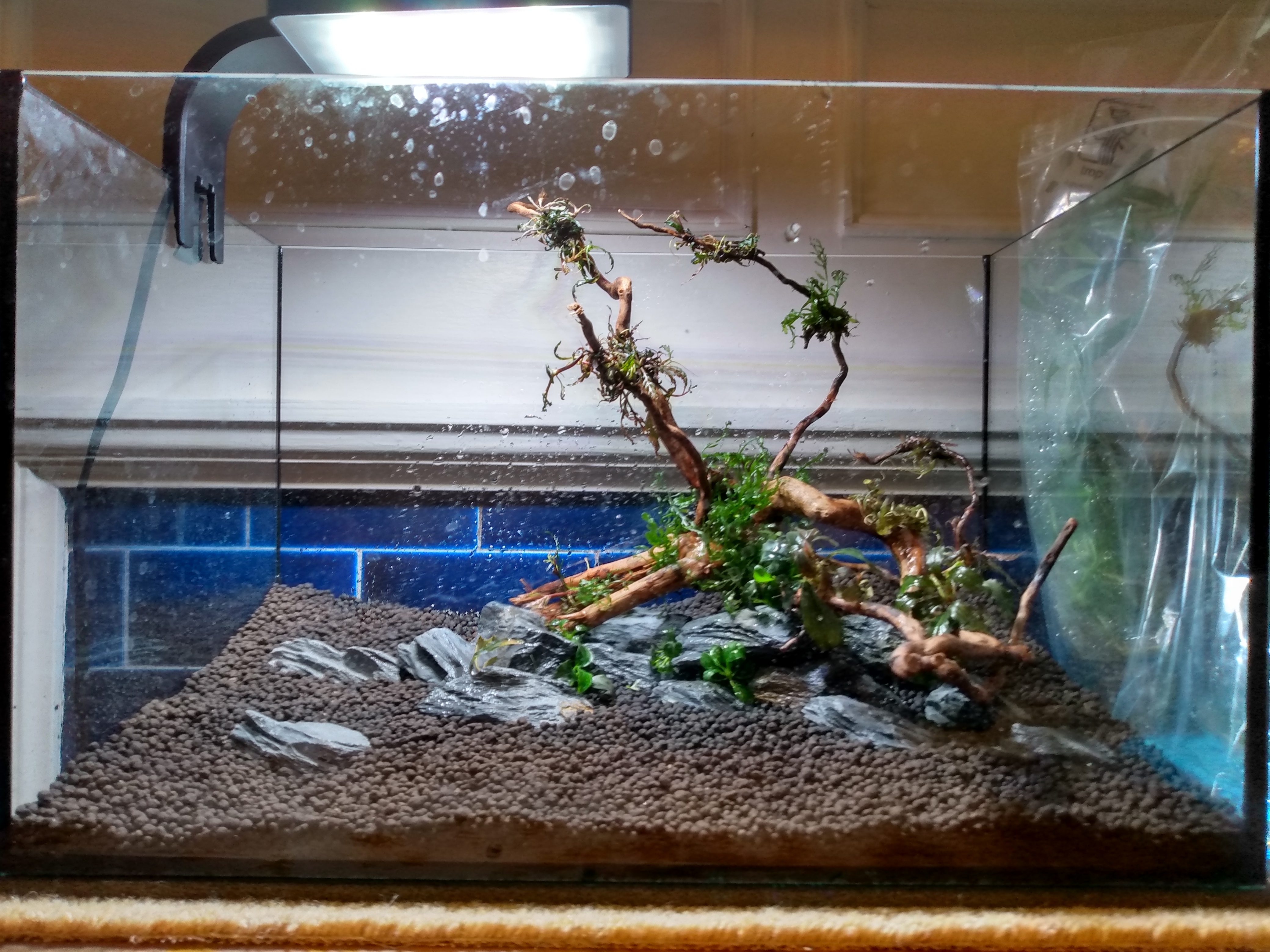 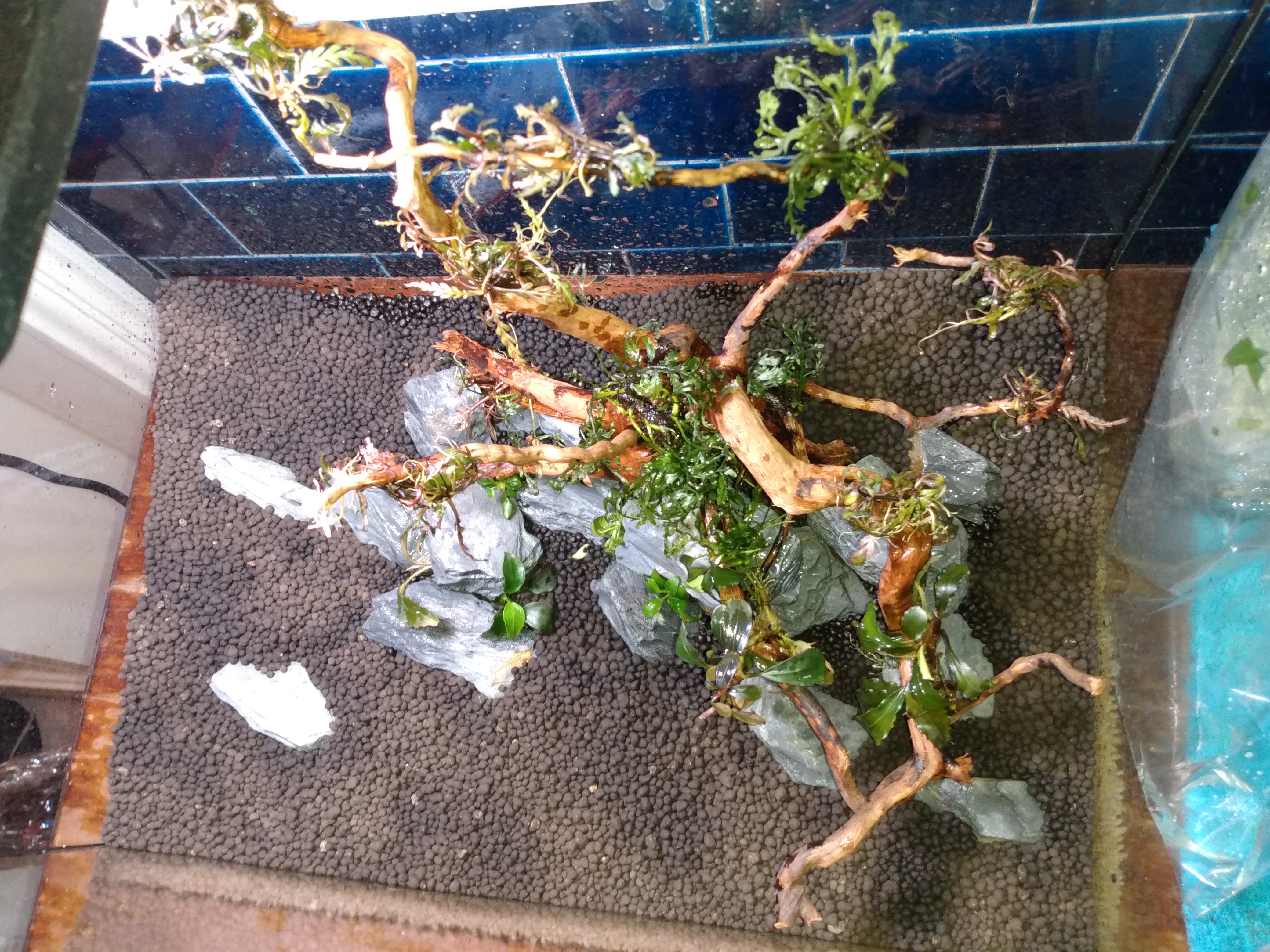 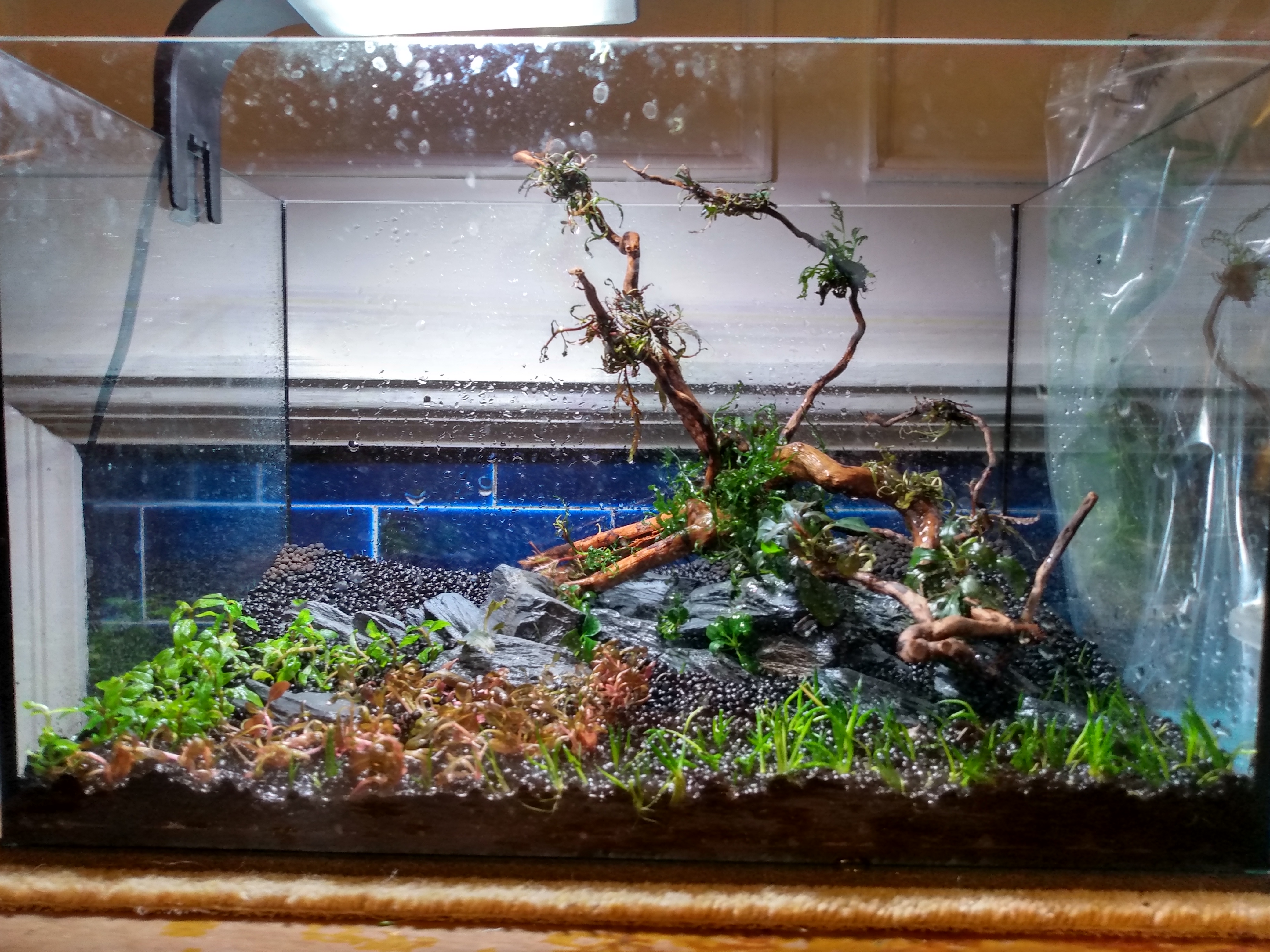 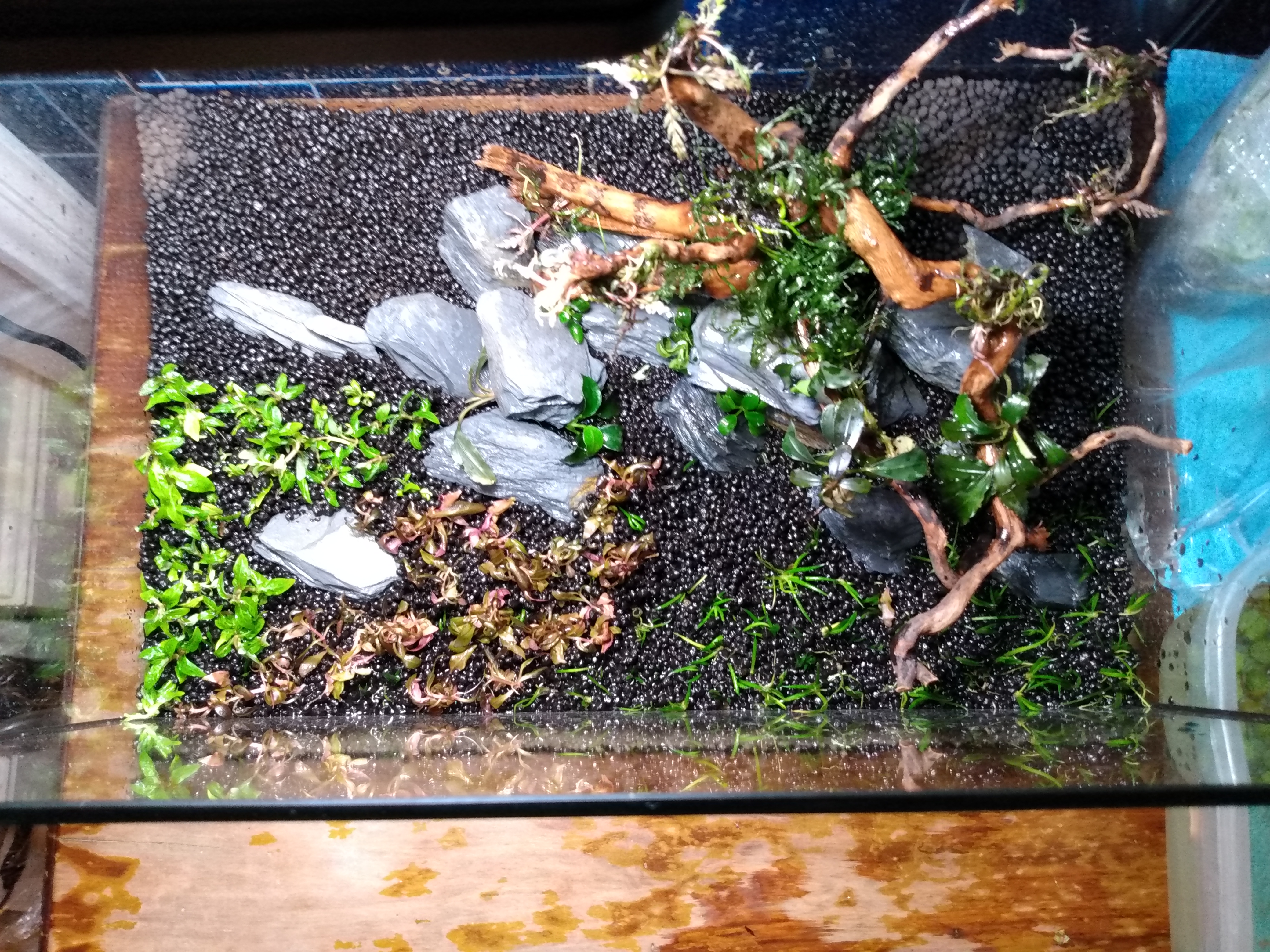 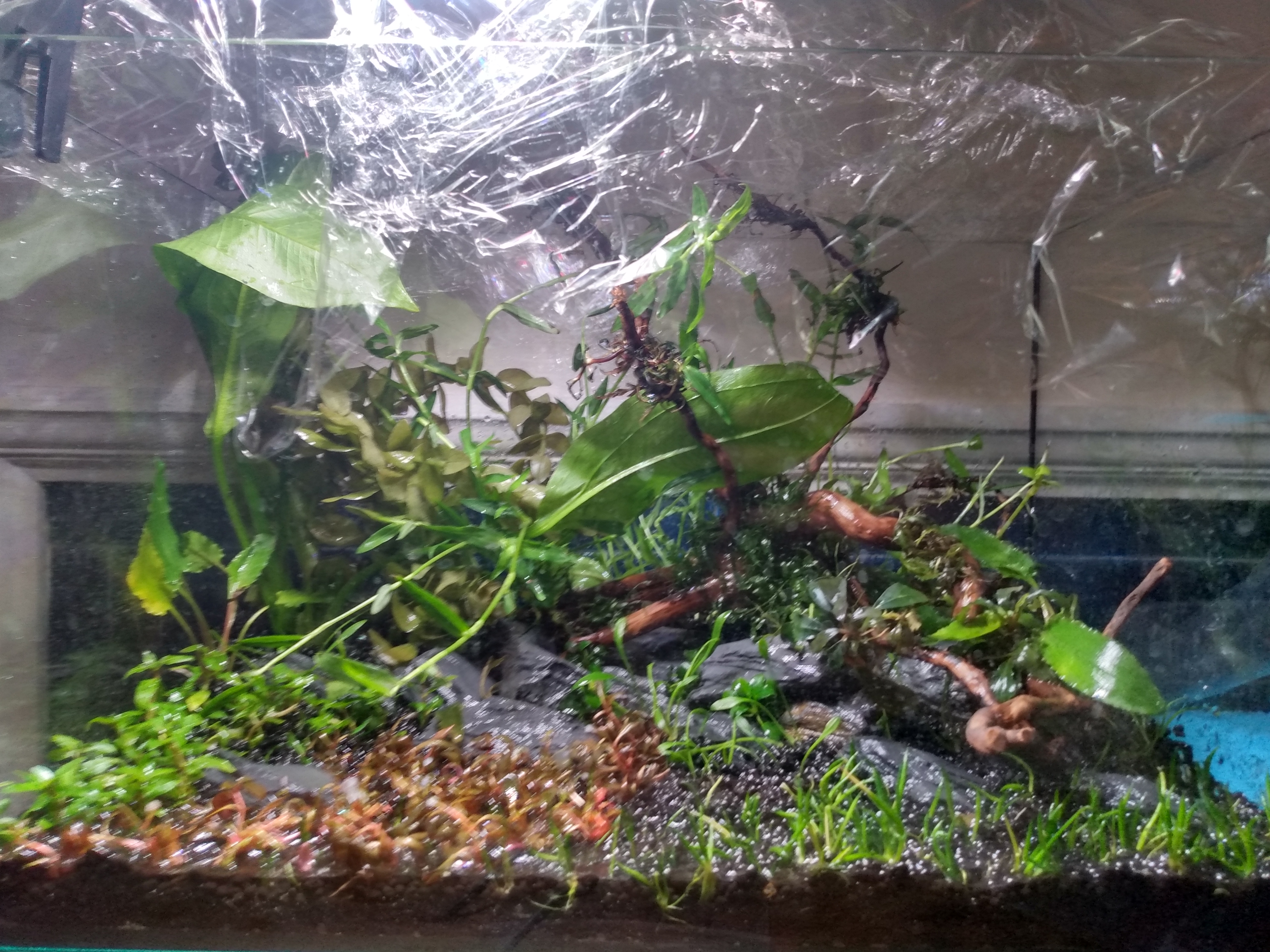 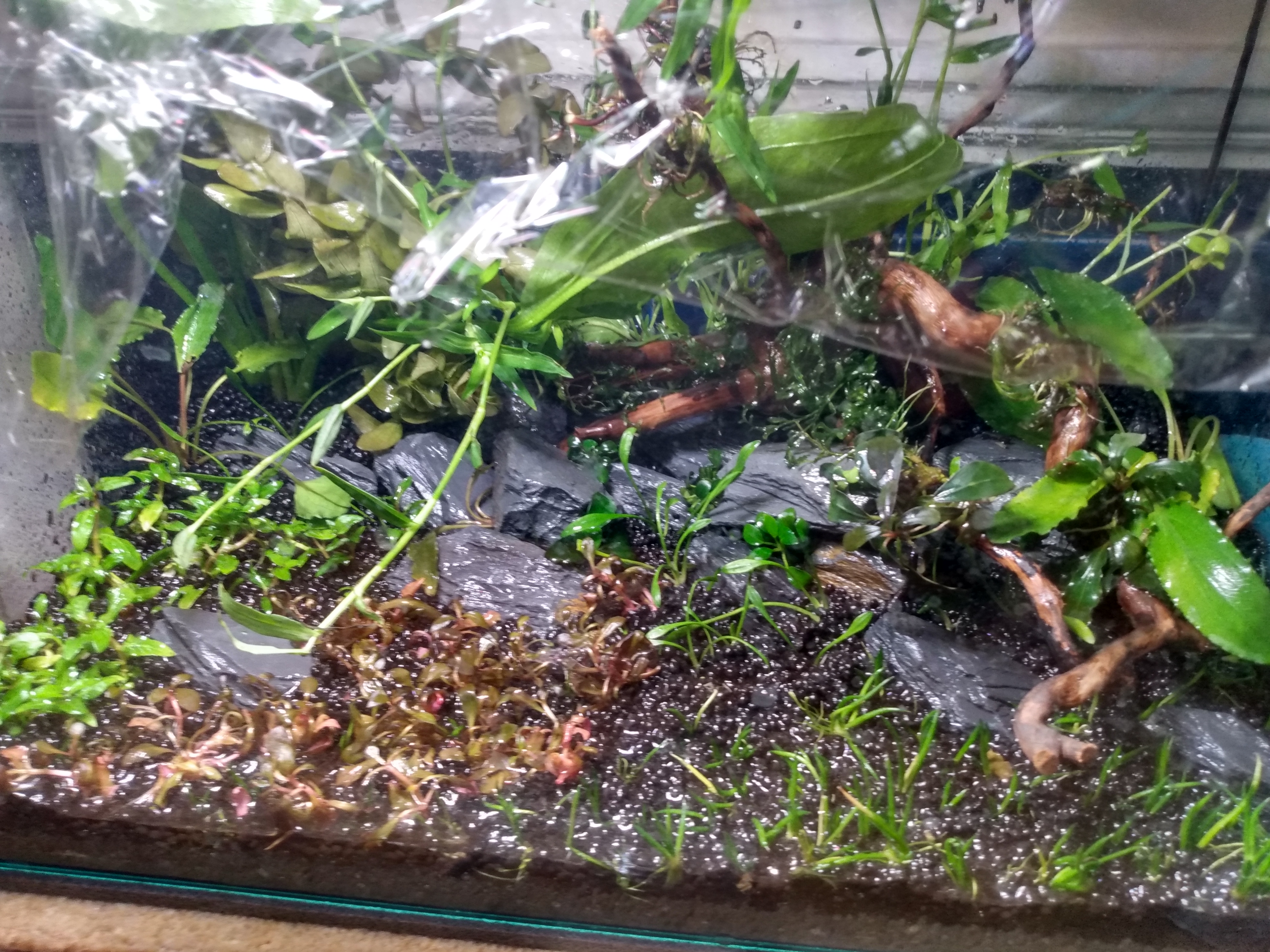 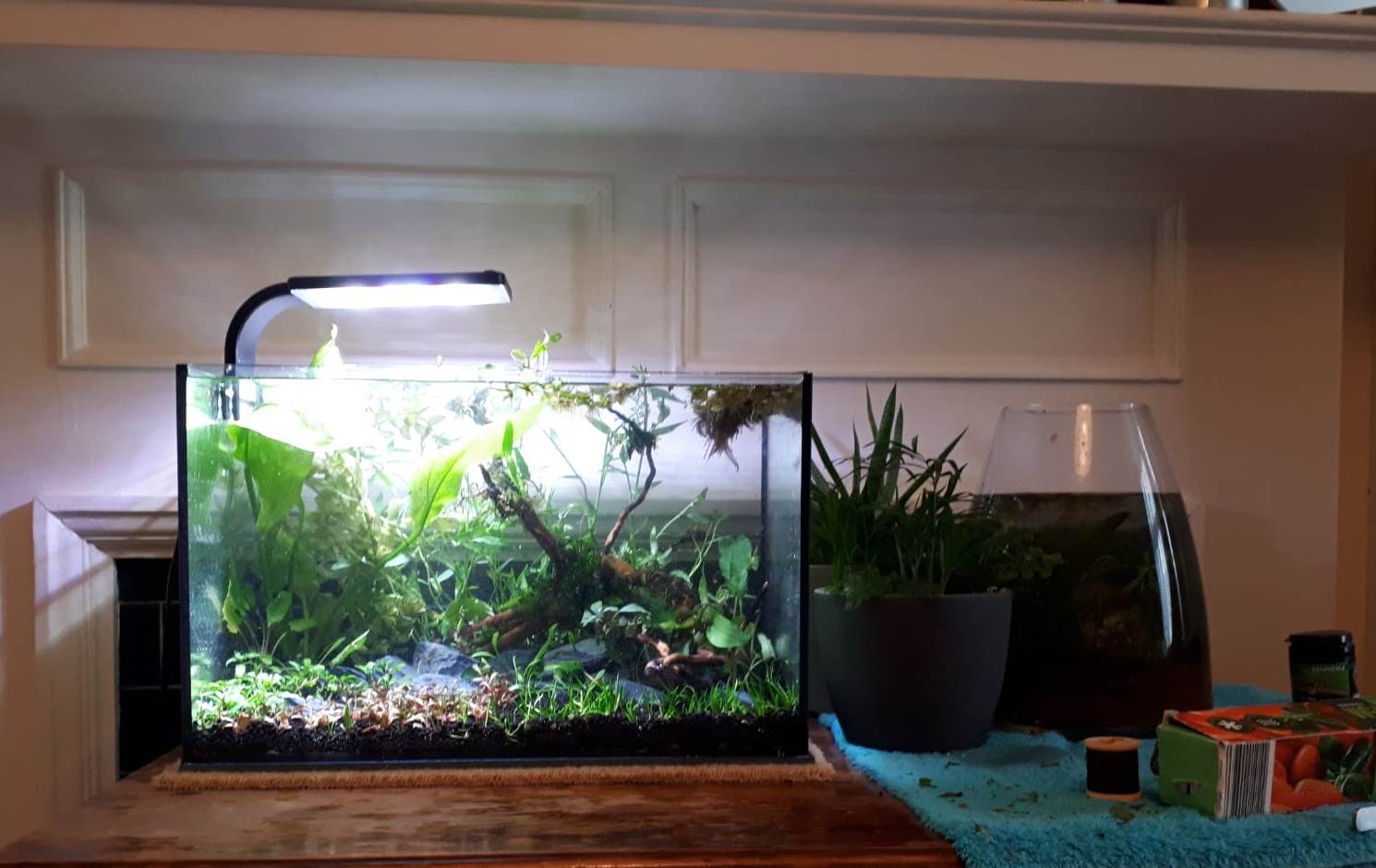 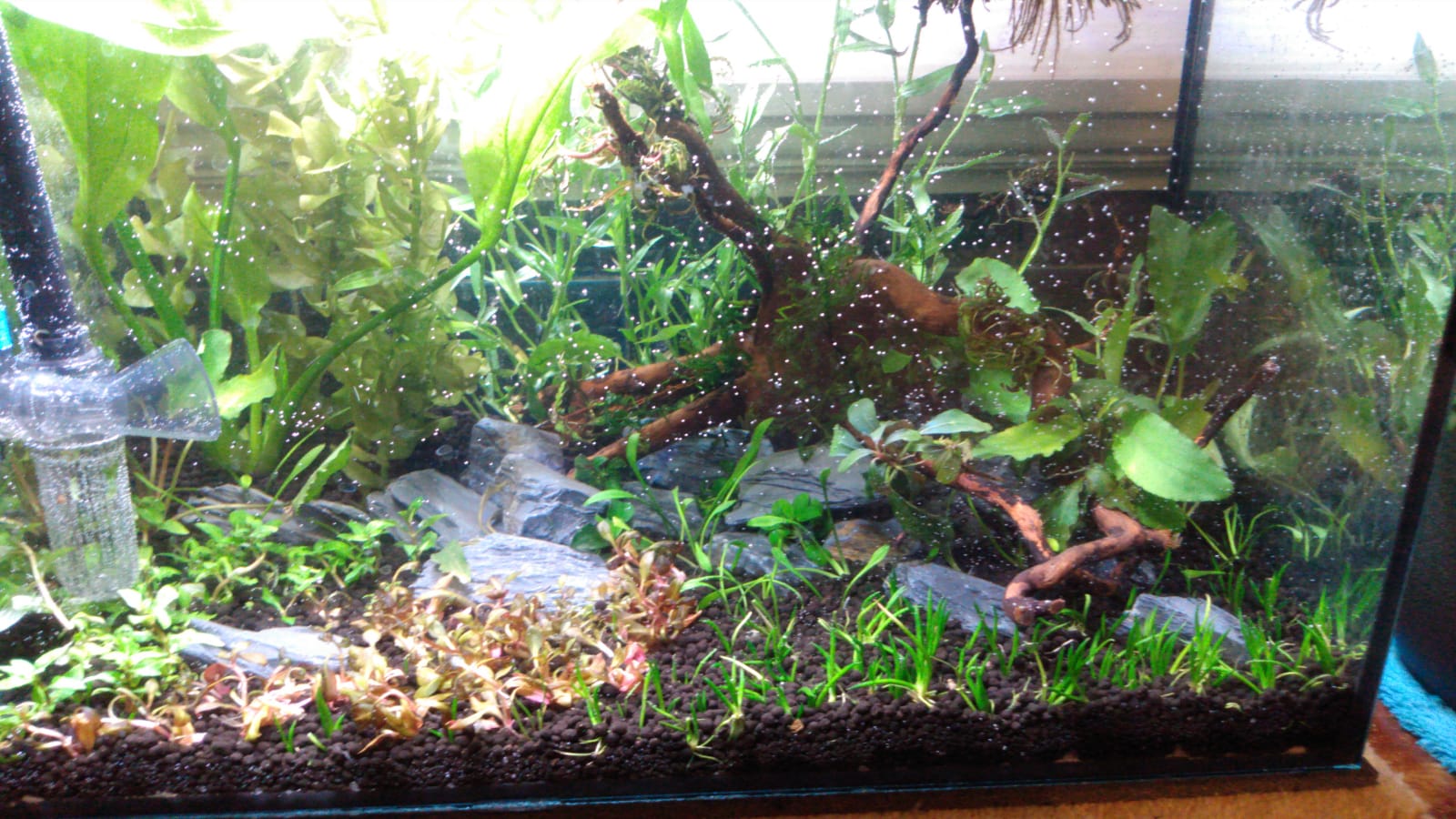 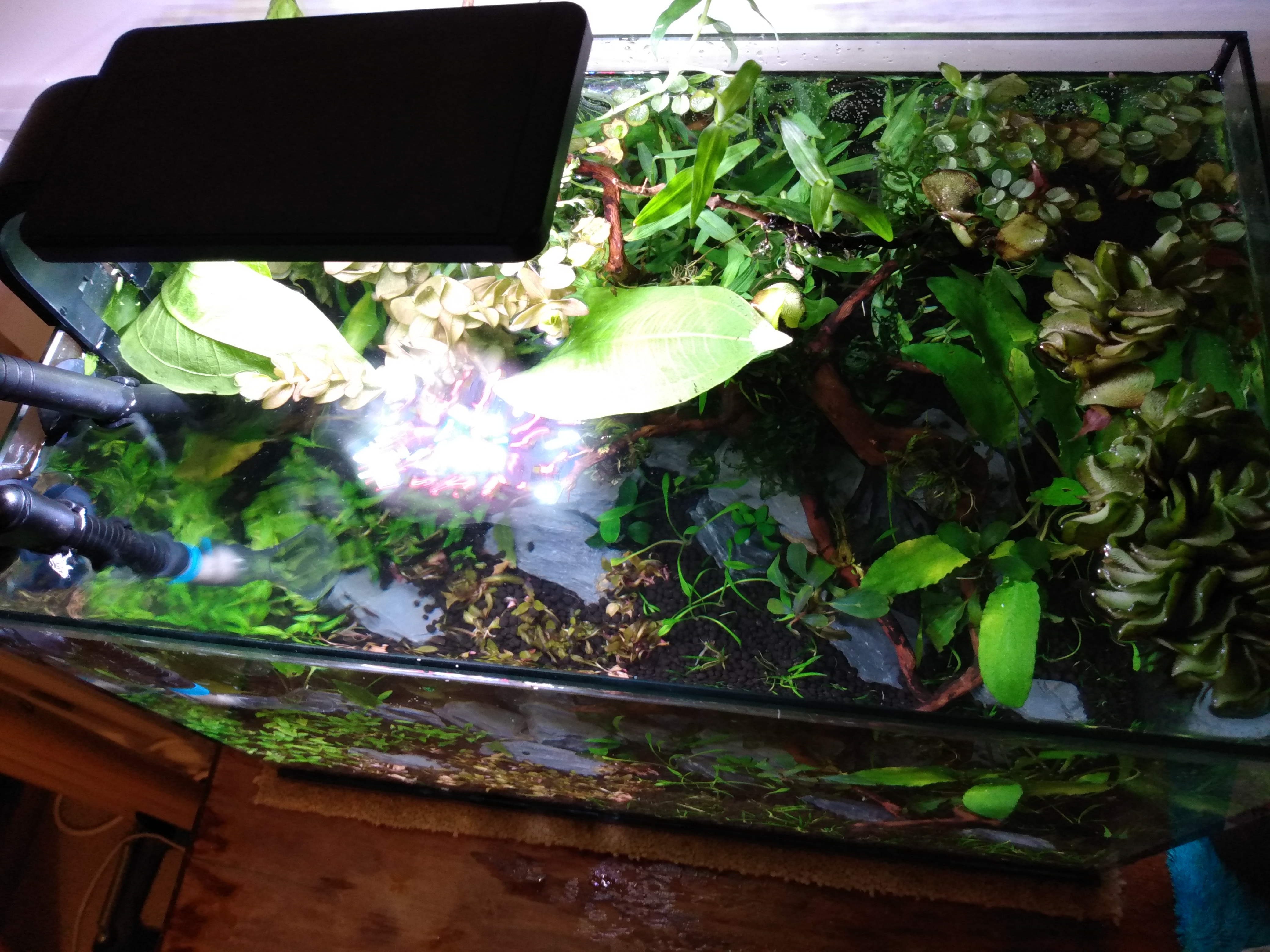 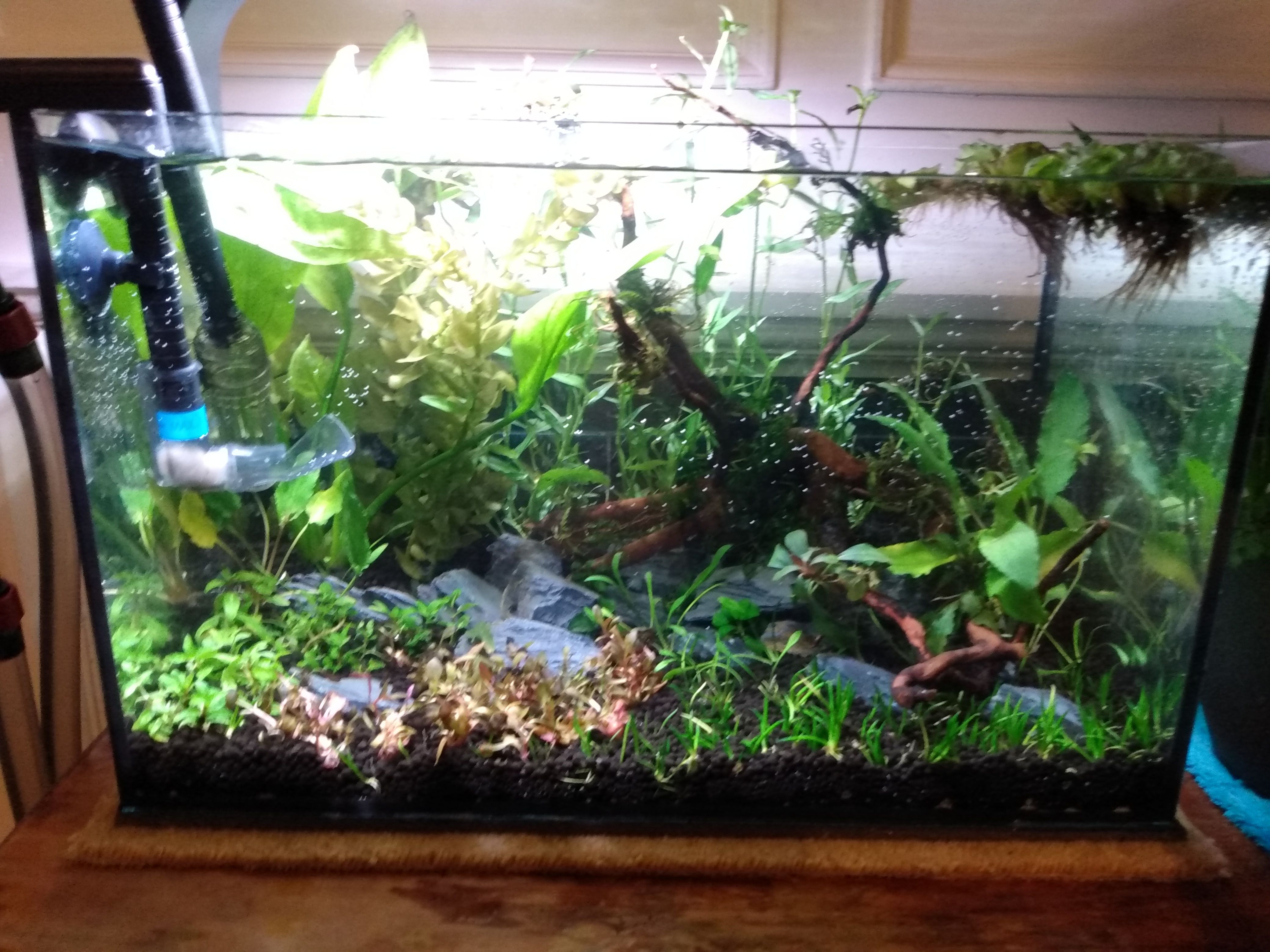 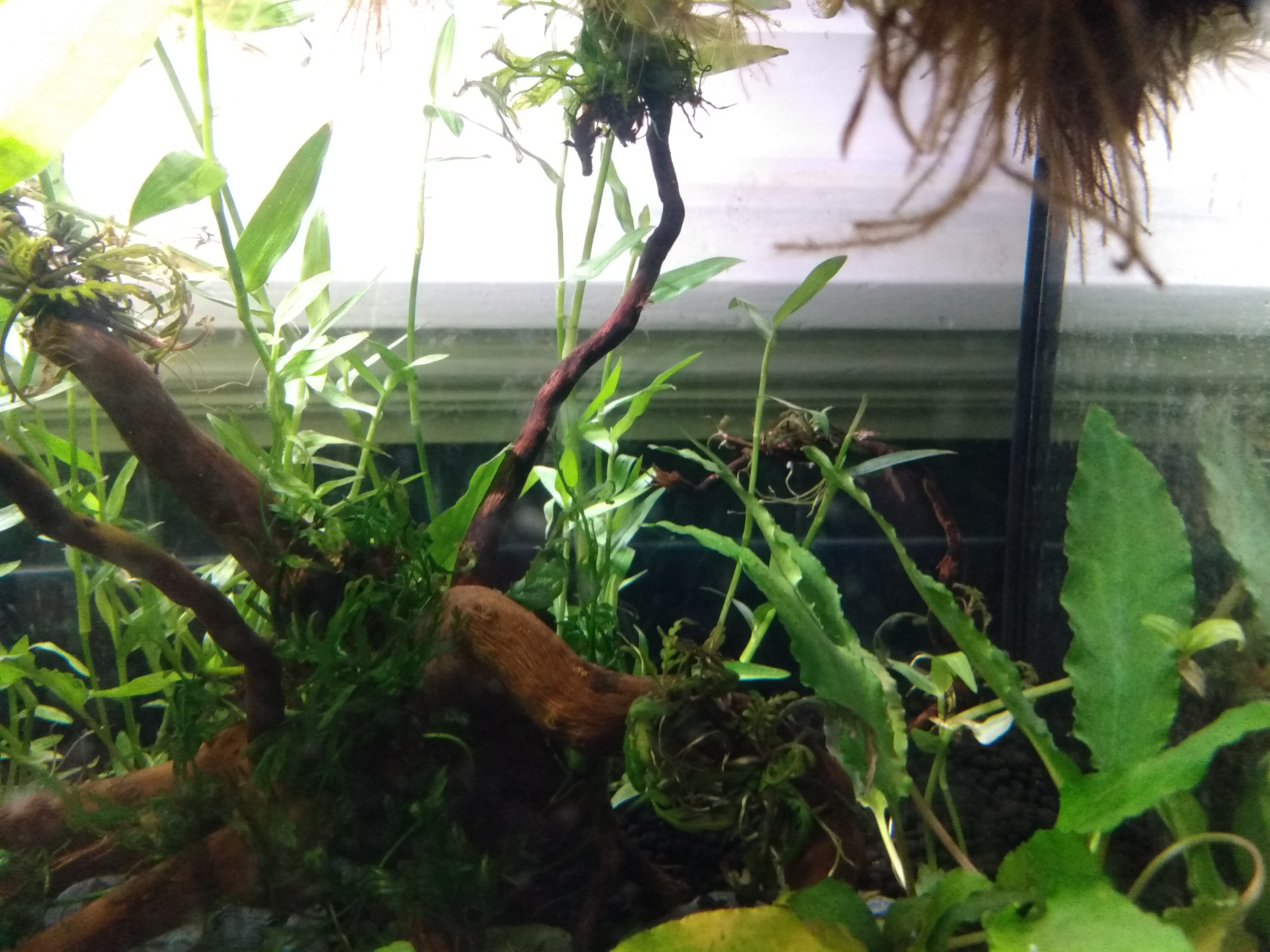 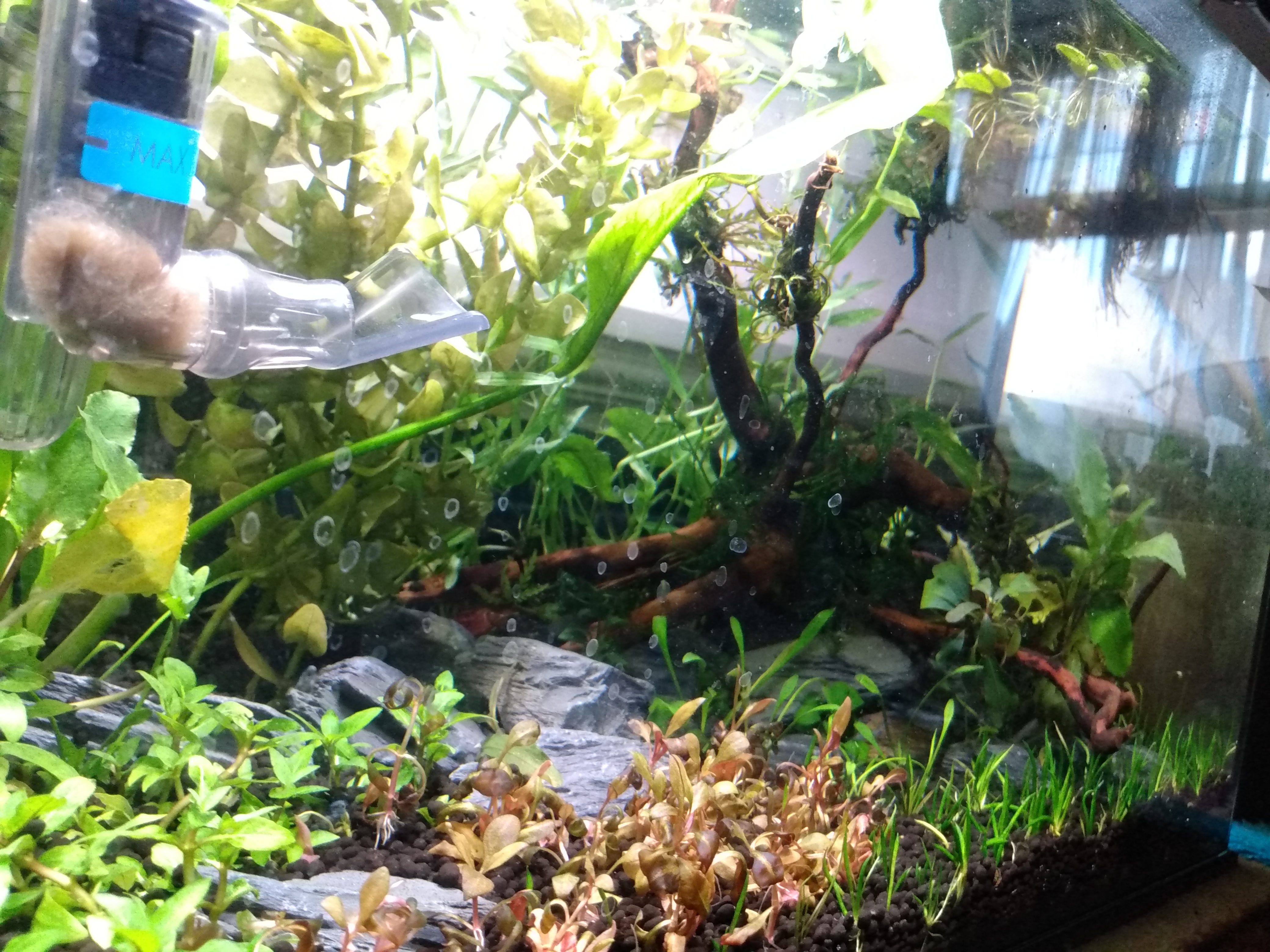 Shoved a bit of floss in to stop the outflow going directly down and further uprooting my styrogyne. I know I should trim that wayward Echinordorus leaf but I kind of like it giving the nearest Hygrophila some part shelter from the flow while it settles in. 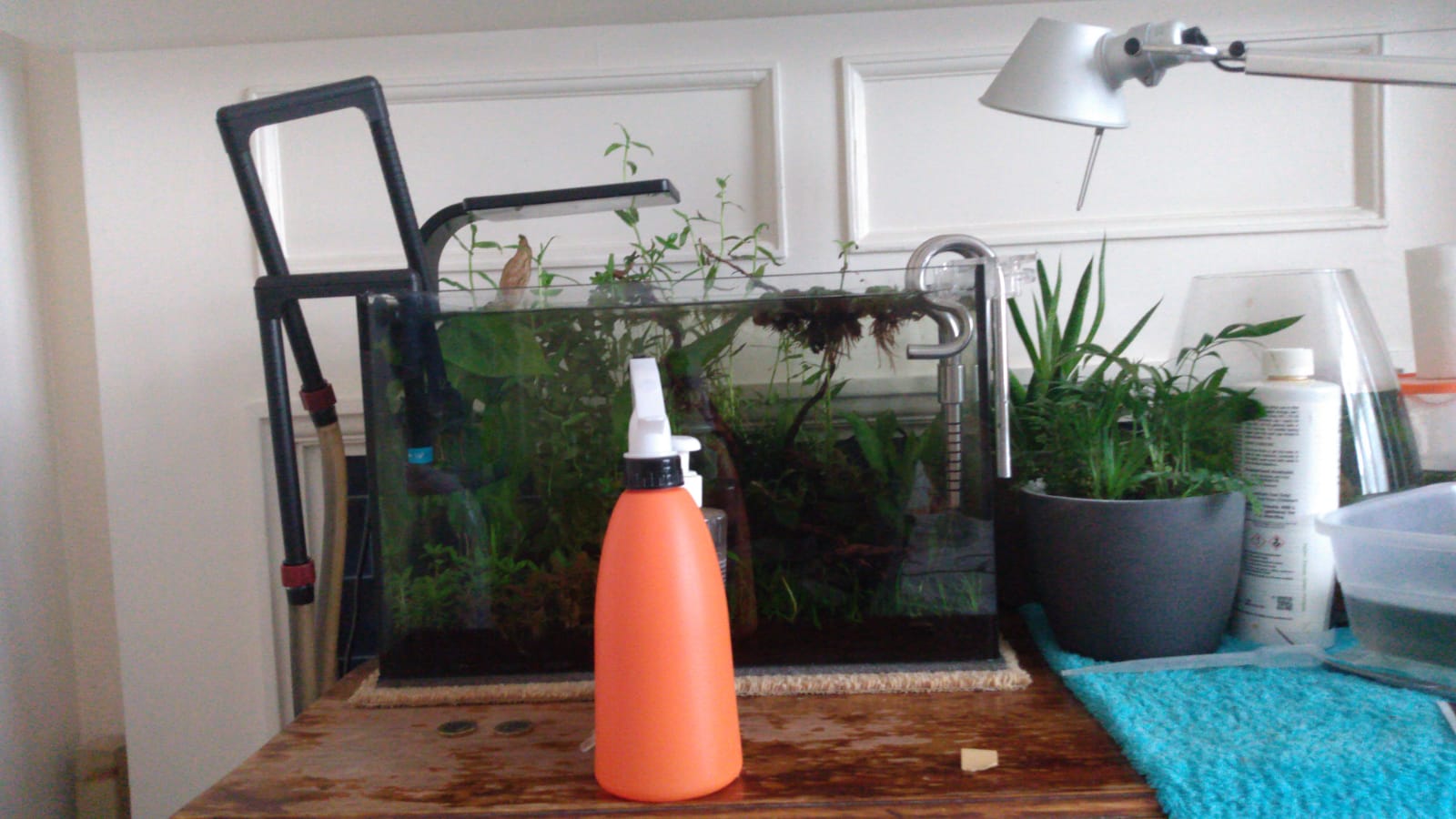 A solution was found for the pipe situation after a couple of weeks. Been dosing a squirt of Tropica's liquid nutrients and a bit of flourish excel to help the plants early on and adapting from the emersed atmosphere. 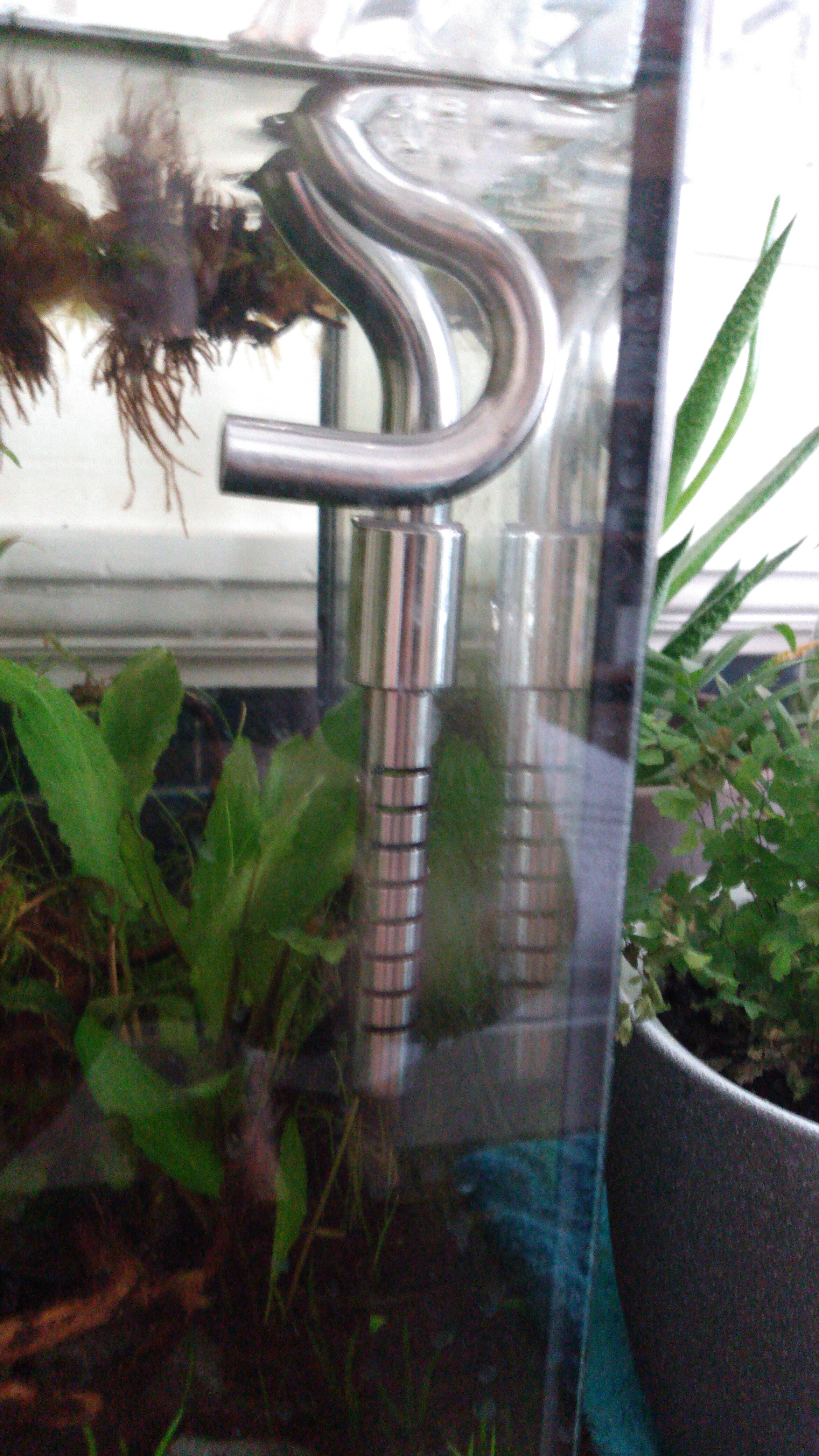 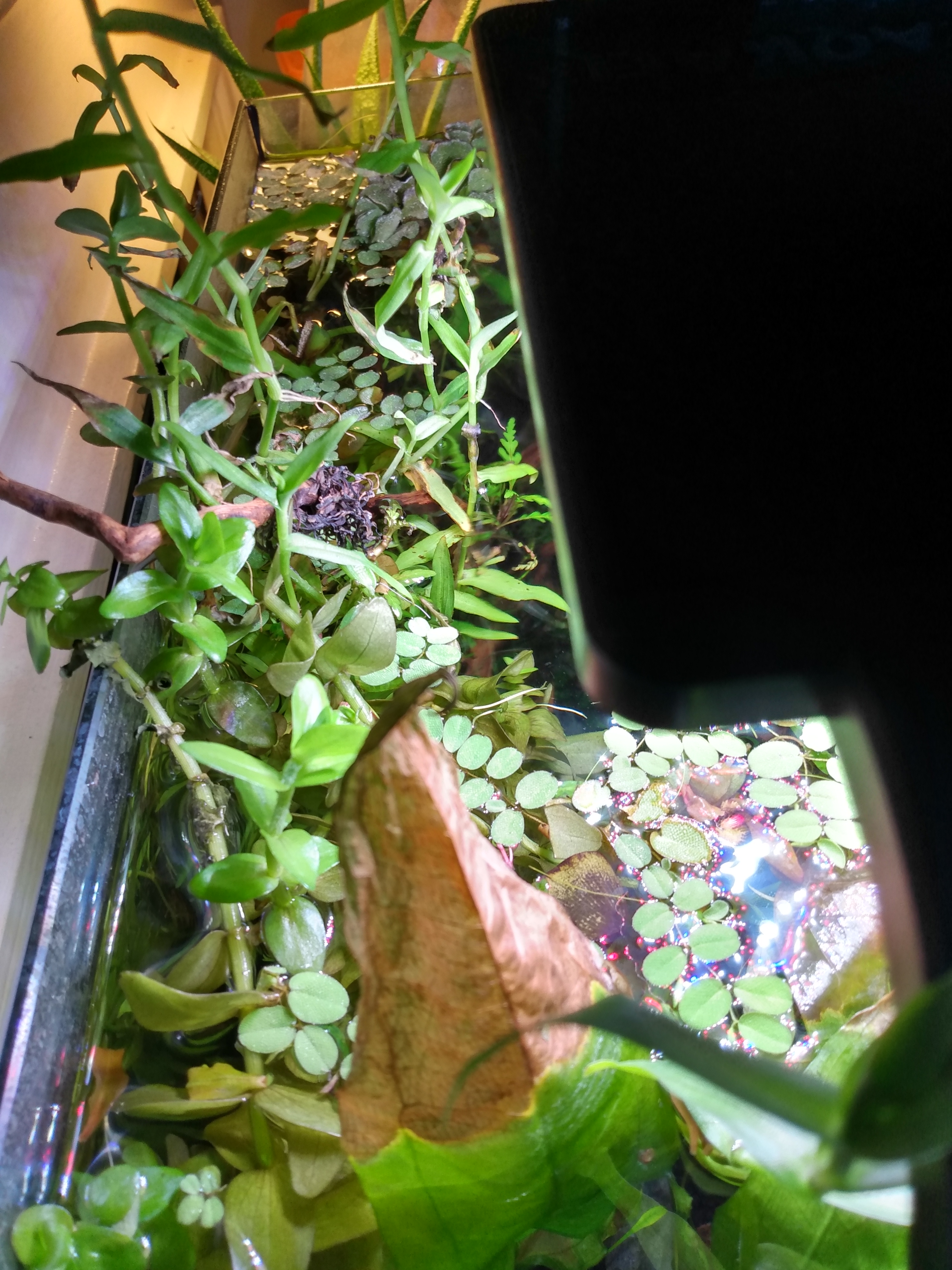 I love this picture, everything fighting for the light yet crisping up when getting too close. It's a harsh world in this room.
I gave the Styrogyne and Alternanthera a trim earlier this week but was waiting for Saturday for a water change to trim the stems at the back 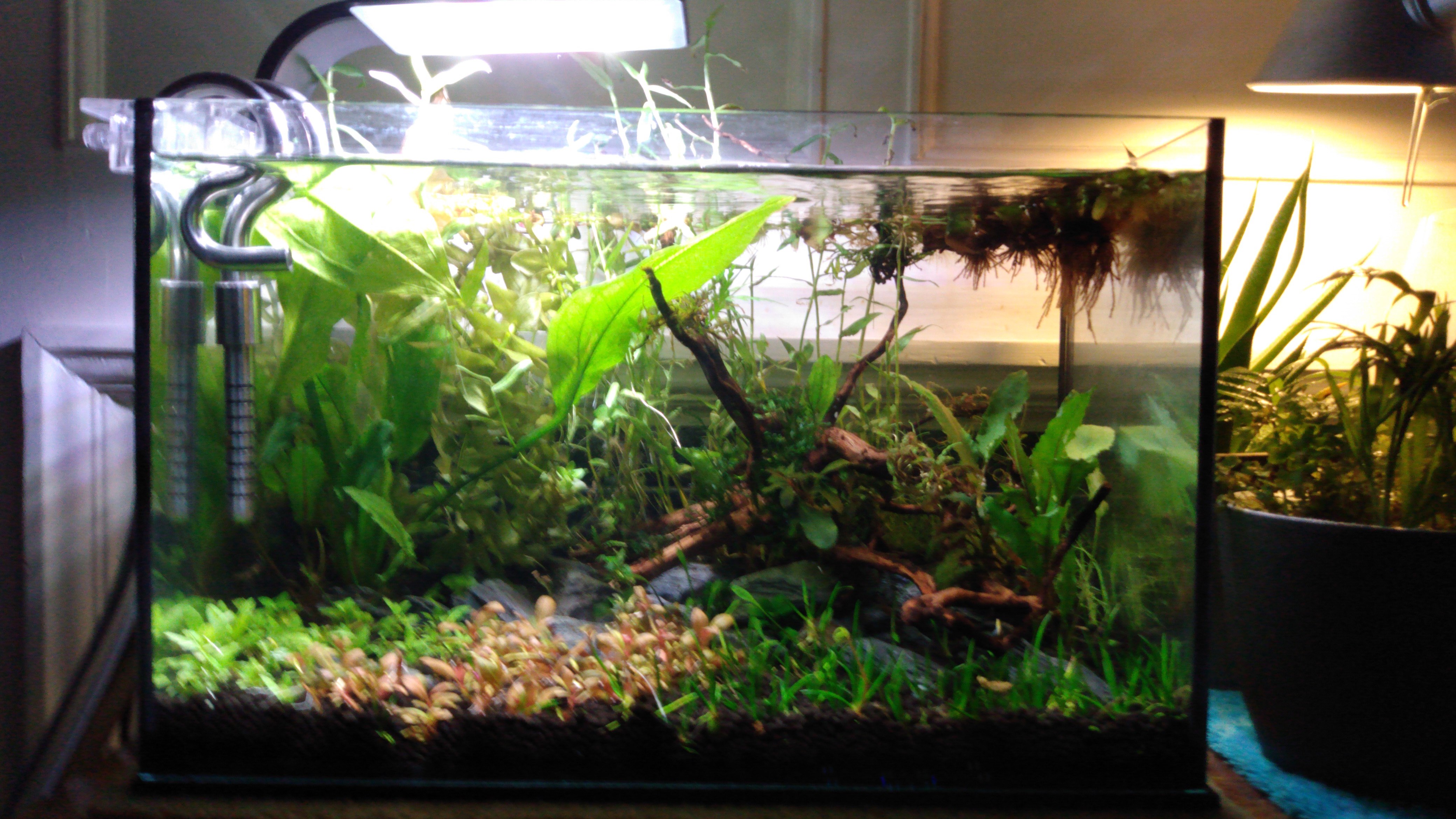 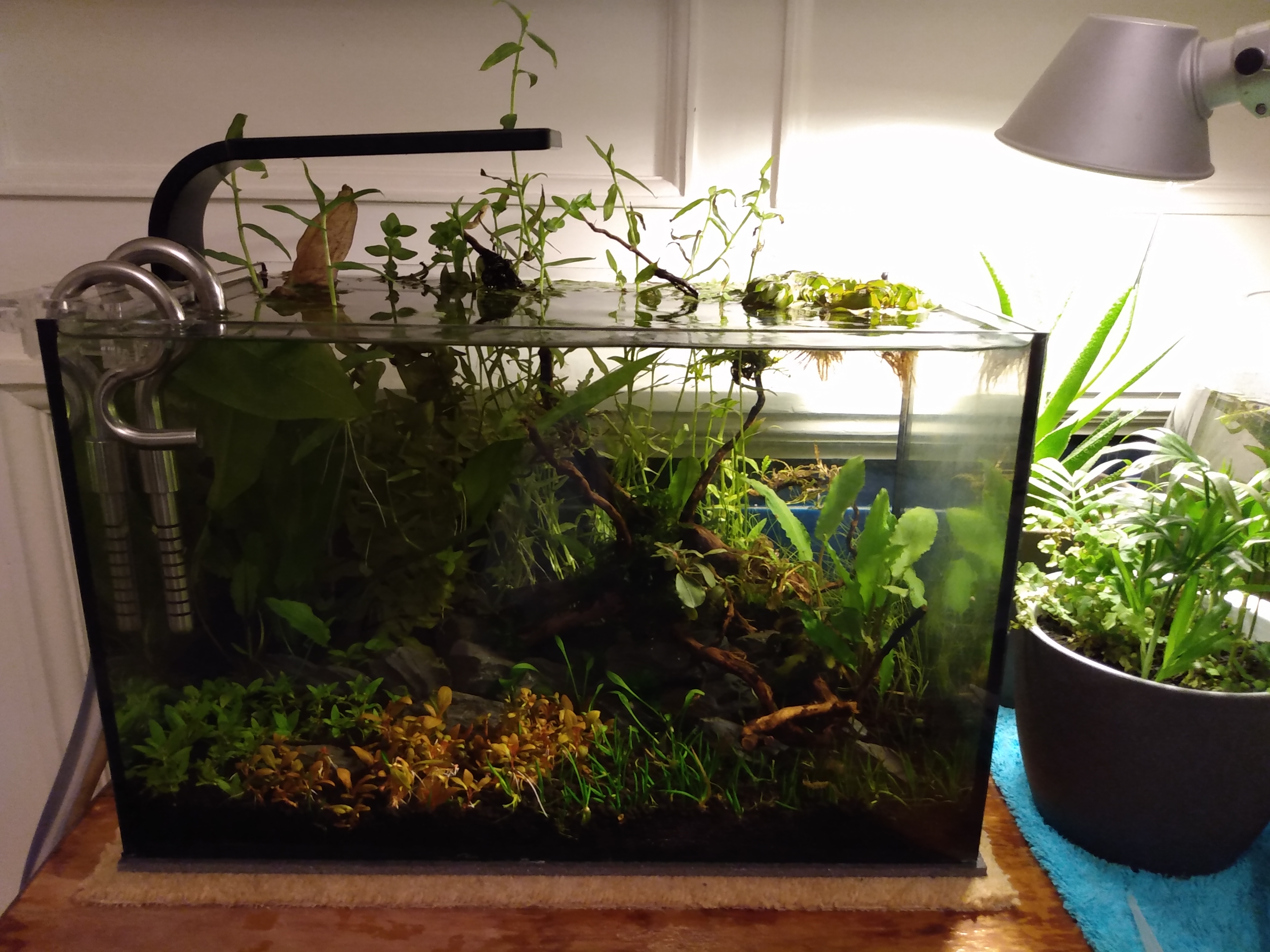 These last two were just taken now to show how the Murdannia has taken a liking to its new home. The crypts had a little melt (well, not the parva) but are back. 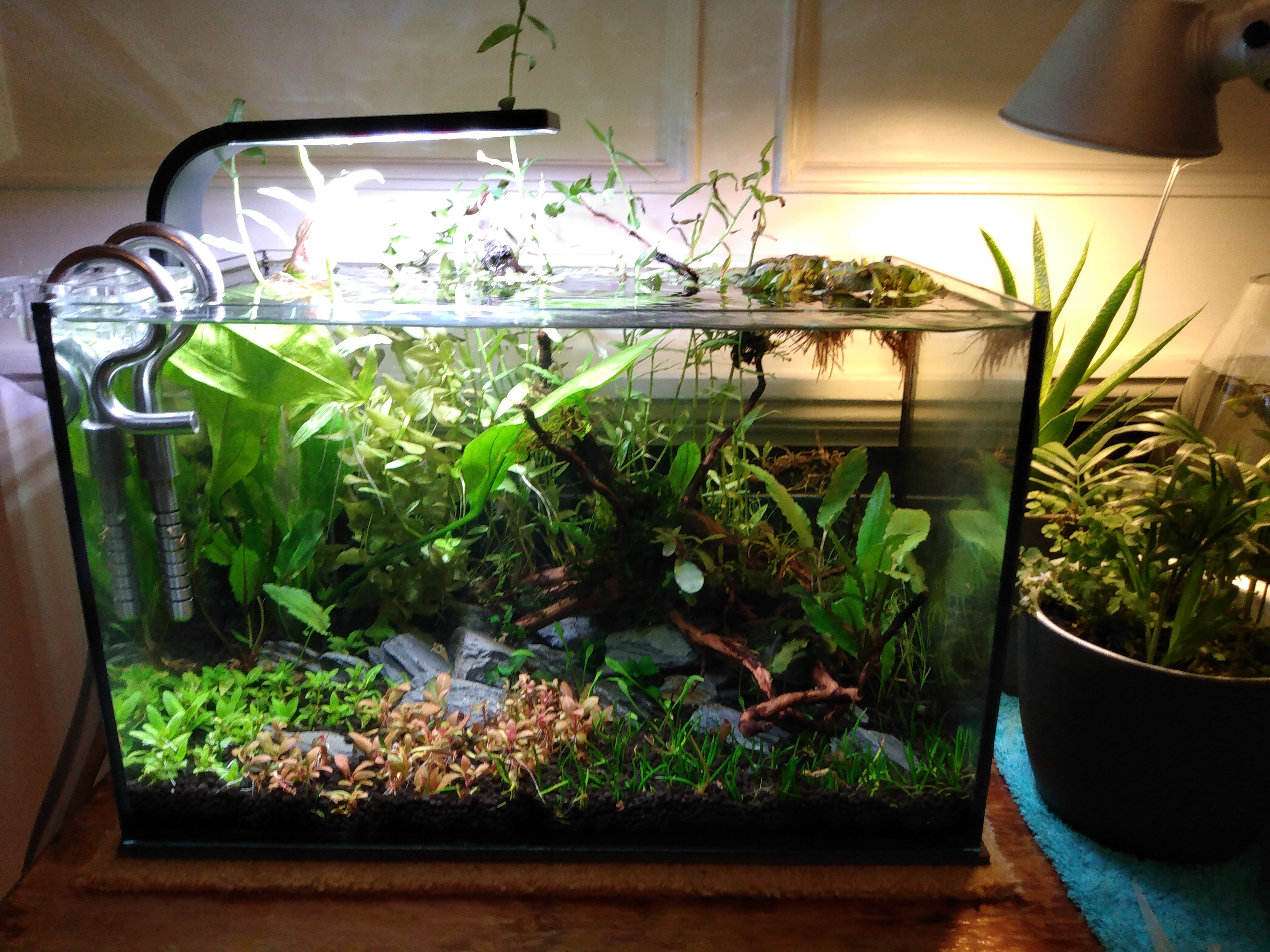 You can just about see the Eleocharis at the back right.

Love it when you only see the escapees after you've uploaded the photos. Added to tomorrow's list.

DeepMetropolis said:
Will look good grown in, but I don't think you will see the stones anymore.
Click to expand...

Yeah I agree, that's just how it goes though. If I actually trim then the few at the front may stay visible. Anyone know how Littorella handles being trimmed?
You must log in or register to reply here.
Similar threads