Well... I finally filled my pond up and I now have to start thinking about what I need to buy. I've estimated that my Pond is around 3000G (12 000 litres) and I want the pond to have fairly good filtration. A pressurised filter... What make (and model) would you recommend? Laguna have had a good review, but I believe they don't make large enough filters for my sized pond...

I also want a fairly powerful waterful... If anyone can also recommend a decent pump make and/or model?
Or would you suggst that I simply use the filter out-take and use that as a water pump for the waterful as I want to use pressurised filtration?

All recommendations and advise much welcomed... I'm pretty new to ponds and want to here of experience...

First of all what is this pond for? I mean are you going to keep fish? If so then I would plan for a pretty heavily stocked pond as IME people who build a pond for "a few goldfish" almost always end up sticking a few Ghost carp and koi in and then having to add a much larger filter. Do it right first time it savesa lot of time and money in the long run!

If you're not going to keep any fish then a pressurised unit may be good enough to polish the water and keep it clear, otherwise I personally wouldn't go for a pressurised unit. They simply haven't got a large enough amount of filter media to really do the job on a decent sized fish pond and need regular cleaning that involves ringing out sponges etc. There are much lower maintenance options. Bear in mind that the ideal filter should be a third of the surface area of your pond!

I would look at filters incorporating K1 filter media. This can be used in a static bed, when it is an excellent mechanical media, or in a fluidised bed with air pumped in when it is a purely biological media. For an example look at the Nexus and Easy pod filters, but they are very expensive - fortunately you can make your own for a fraction of the cost!
Have a look at this for some ideas, http://www.happykoi.co.za/filters/how_to_build_your_own_filter.htm

As for pumps you'll need a solids handling pump to get all the fish, plant and blown in debris into the filter. I'd recommend (in fact I've just bought one for my new Quarantine set up) an Oase Aquamax pump. They have a cage to stop fish getting through and can pump solids up to 8mm into the filter. They are also extremely energy efficient.
You need a pump that will turn over the volume of your pond every two hours minimum, so for a 3,000gallon pond that means 1,500gph. Taking into account the loss of flow from pumping through the pipe and lifting the water, I'd recommend a pump of at least 2,500gph, but preferably a bit more to be sure of adequate flow!

As far as a good waterfall goes, for a good flow over the lip you'll need 300-600gph per 6" width of the waterfall! Don't forget to take the loss of flow caused by the pumping head into account here too, you may need a bigger pump! While you can't really have too much flow, make sure your filter can cope with the flow rate, or it will overflow disastrously!

Hope that isn't too much for you and doesn't burst your ideas too much, but there's no point throwing your money away on a little unit that you will be forever cleaning out and cursing and that won't do the job!
Ed

Thanks, Ed... That cleared a few things up... So, I should be on the look-out for a cheap Koi fltration unit with both biological and mechanical filtration and is the around the third of the size of the pond...

Ed, didn't you make your own Koi filter? Any advise... I think one of the best routes for me would be to build my own... (and buy a powerful pump!)

What are your views on UV sterilization? Do you think it's necessary?

I was thinking of the Blagdon Midipond 14000 duo filter... Any advise on this filter? I know it's slightly on the small side, but I do only want a low fish stocking... It's cheap as well...

Cheap's relative in koi!!! You can get away from the third of the pond rule with modern media and ideas, but bigger is better. As far as the fish are concerned it can't be too big, but real life obviously affects that!

From what I gather, you've already dug and lined the pond?
If this is right you're going to really have to use a pump fed system with the pump in the pond feeding a filter that then empties out into the top of your waterfall. I'd suggest a similar system to the one I'm using on my quarantine set up, only scaled up. i'd have the pump in the deepest part of the pond pumping water up into the filter.

The filter itself I would build from two containers with the first static K1 and the second fluidised K1. That link I posted before is the basics of DIY K1 filtration (they call it active bed media, but it's the same thing).
The first will be your mechanical filtration (though it will act biologically too) and will need to be regularly cleaned. Fortunately the huge advantage of K1 is that this means stirring it up, ideally with an air pump.
A static K1 chamber simply needs to be a container that stops the little pieces of the K1 media flowing out! As it floats at the top the exit pipe, with slots cut in to strain the media out, needs to be at the top too. My empty QT filter looks like this, 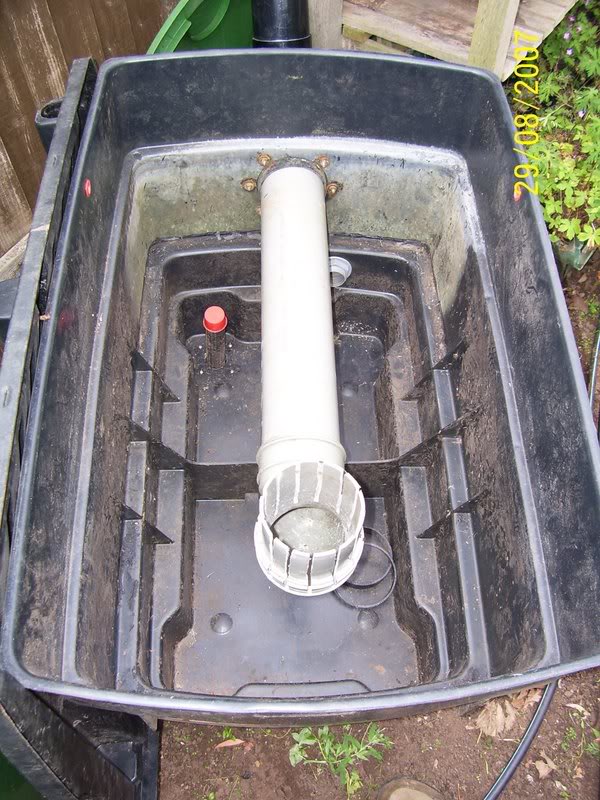 The K1 media will float around the upright 4" pipe and strain out all the debris while bacteria will grow on the media too. Notice too that I have a drain in the bottom of the tank (the red cap). This chamber will catch all the dirt from your filter and this is the bit you'll have to clean out as often as possible (It is dead easy so that's actually not a chore and the waste water can go on your garden).

For a small pond that will be all the filter you'd need, but for your pond I'd have that filter linked up to another container with fluidised K1 in it. This is a very similar set up, but the filter being is kept moving by adding air to the filter chamber. This really increases the efficiency of the filter and, best of all, it is completely maintenance free! The media moving constantly doesn't trap any dirt and cleans itself!

You'll be best to do a fair bit of reading before actually starting to build one. Try doing a search on google for 'DIY filters K1'
This is good thread from the US and shows the basic ideas too. http://koishack.com/forums/index.php?showtopic=5007&st=0

I have just finished my filter and if I'd known about K1 when I desgined it I would have designed it rather differently! I will be retro-fitting it with static and fluid K1 next summer I think!
Ed

As for the UV they are essential for getting rid of green floating algae in a pond. Having said that I don't have mine on most of the time! I turn it on when the water gets a green tinge and then turn it off again when it's clear. It saves bulb life, power and I know if the green water starts that something has happened re extra nutrients or similar so I turn the UV on and up the filter cleanings to make sure I get rid of the problem.

The Blagdon filter looks ok, but all that foam will need cleaning, and that mean hauling it out squashing, rinsing, squeezing etc. etc. etc...
To clean a K1 filter you turn off the water pump; wait for the water to stop coming out of the filter; turn the air on for 5 minutes; open the waste valve to drain the dirty water away to waste; close the waste valve; turn off the air; turn on the water pump and top up the pond! Job done and no 'manual labour'!!!
Also whatever stocking levels they say halve! An over-stretched filter is not a good idea, it needs to be bigger than you need.

If you're OK at DIY you can build a much bigger, better filter for less money than the blagdon unit!
Ed

Didn't freak you out with all this did I?
It's not as complicated as I've probably made it sound!
Ed

Hi, Ed... And thanks for all the info... Now I've had a few days to get my head round it, I think I understand how to make my own filter system. I've also decided to get a Oase Aquamax Eco pump. They seem to to very highly recommended.
In the last couple of days, I also went to a specialist pond store and had a look at the gravity-fed filters and thy look very simple.

Cheers for the help,

Glad to hear it, you really won't regret going with a decent sized filter!

My Aquamax Eco arrived yesterday and it looks like a pretty solid bit of kit, just like all Oase pumps. Will have it running in three weeks, but it won't disappoint.

Do bear in mind that gravity fed filters have to be at the same height as the pond and plumbed in with large diameter pipework (Usually 4") through the wall of the pond, or via a bottom drain in the base of the pond. Pretty hard to do if your liner's already in!
Ed

Sorry, Ed... After planning my DIY filter for a week or so, I went into a local aquatic centre and found a very good deal on the Oase Aquamax Eco 8000 pump and Oasis Clear Pond 25 filter and... I bought them...

I know the filter is smaller than the one I was planning to build, but... I couldn't help myself... fish stocking is going to be minimal and the pond will be full of fast-growing plants, I thought it would do

I may still build my own system, but this filter has been given a lot of praise and the 5 year guarantee gave me high hopes...

Oase are a good brand and I'm sure it'll do a good job! Certainly no need to apologise!

Just looked at that filter and it's got all the basics you want in a filter. And you can always upgrade that with K1 pretty easily IMO and up the filtration power.

Let me know how you get one!
Ed