First attempt at a planted aquascape. Tank is a Red Sea Max e-170, 60w x 45d x 55h, originally wasn't planning to run co2 but the Eleocharis acicularis 'mini isn't doing great so now I am. I'm still running the AI HD26 led light that came with the tank, I may have to play around with the settings too. 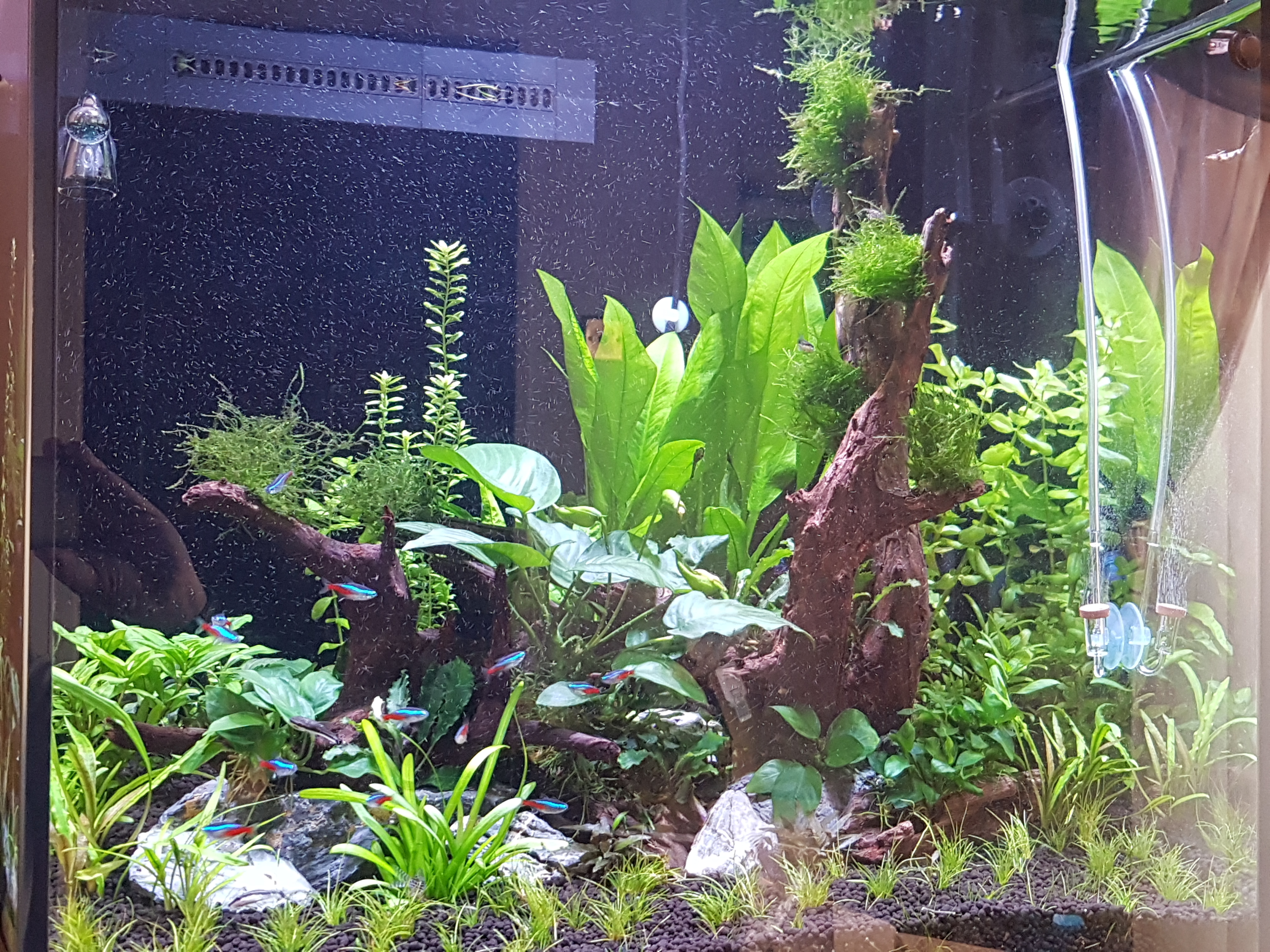 That is an extremely powerful light you have!

Given the tank height of 55cm, I’d limit photoperiod hours (I’d begin with 4h max @ 75%, and allow 30min ramp each side) and perhaps run HD26 (marine version or freshwater? though I believe the FW version was very short run) not under 75%
If light seems too intense, add some floating plants to diffuse light (I don’t know if there is (still) a diffuser or wider lens accessory available for this light)

Obviously you can play with the light program,
15-30min ramp
50% x 1h
75% x 2h
50% x 1h
15-30min ramp
Moonlight effect to extend personal viewing (2h)
(I prefer to use 5% or lower white light for moon effect rather than blues - which don’t look like any moonlight on water I’ve ever seen - obviously with the Hydra you can customize your moonlight

If tank receives a good amount of ambient light, then plants will already be “up and about”, so running an evening photoperiod (assuming that’s when you’re home) can be counterproductive
I’d suggest adding Rotala Vietnam H’ra as it is very obvious in Leaf Open/Close

As you’ve no CO2 at present, I’d do daily water changes, and add Seachem Excel
Which Aquarium Soil?

Which means it’s a relatively “narrow” light spread (120 - 130 degree lens is more common in FW applications), and as you reduce light intensity, the “spread” of the light “cone” will become even narrower - ie, some plants will experience strong shading effect (even without any hardscape)

Definitely play with the app to deliver a more FW type spectrum (less blue), though you’re somewhat limited as the stock LEDs are designed for marine/reef spectrum
Note this will already reduce the effective watts of light, so again be conservative with intensity reduction

I’d also suggest trimming back or tying down the moss clumps - lower levels will usually brown and die back - depending on moss species, it’s more/less likely

If you’re looking for moss Amano style, he tied with loads of cotton line, then trimmed right back to wood
A

Hah!
Just saw in your other post it’s been running for 2 months
Forget my advice it’s looking grand however you’re doing it

Thanks for the replies. I used Tropica Aquarium Soil (about 20 litres), photoperiod is 8hrs ramping up and down for 1hr. I started off with the blue, green, red and cool white settings at 40% (the rest at 0), I was getting a bit of algae at these settings so played around with the settings so they now run at 15%. I have now added a pressurised co2 kit, note the Neo diffuser in the bottom right of the picture. Apart from the Elocharis all the plants are in the easy category, in retrospect I may have been better off with Helianthium Tenellum as a carpeting plant.
How does the saying go? Something about walking and running lol. All in all though I'm happy with how it's turned out.
You must log in or register to reply here.
Share:
Facebook Twitter Reddit Pinterest Tumblr WhatsApp Email Link