Hadn't thought about diffuser maintenance- could just unplug the mesh from the wall though. If the bubbles are getting trapped could move the diffuser to the side wall. Thinking of upgrading to a rhinox 5000 as some of the current bubbles are quite large. If I do then it should be less of a problem as they are 2" diameter which should spread the bubbles away from the wall.

Looking at the grid on the aquatic magic site I think I should have gone with that- probably will do when I order some stuff from them. Picked this stuff up from a craft shop and had seen it used in a moss wall before. Can see a few fronds poking through but I can see that it could cause problems later on- don't want this stuff to die on me as well!

When you say slow, how slow? how long did your wall take to fill out LD? I guess I'm lucky Dan was generous with the amount of moss he gave. Considering another similar sized wall on the other side- any faster growing mosses that are better suited?
Journal: First Planted tank- Two Towers: <a class="postlink-local" href="http://ukaps.org/forum/viewtopic.php?f=35&t=2150" onclick="window.open(this.href);return false;">viewtopic.php?f=35&t=2150</a>

Spider Pig said:
When you say slow, how slow? how long did your wall take to fill out LD? I guess I'm lucky Dan was generous with the amount of moss he gave. Considering another similar sized wall on the other side- any faster growing mosses that are better suited?
Click to expand...

Thanks for the offer LD. I'll probably order some of the mesh from aquaticmagic soon so may take you up on your offer then.

Just come back from a long weekend and the growth rate has really shot up. I think the plants are responding well to the higher fertiliser dose.
Journal: First Planted tank- Two Towers: <a class="postlink-local" href="http://ukaps.org/forum/viewtopic.php?f=35&t=2150" onclick="window.open(this.href);return false;">viewtopic.php?f=35&t=2150</a>

Your rooted plants would benefit from a richer substrate as some plants mainly absorb nutrients through the roots such as cryptocornes. One thing I have tried is JBL solid fertiler balls. They are made out of clay and can be pushed to the bottom of your gravel. I think I paid about Â£10 for a box of 20 from Maidenhead Acquatics.
see
http://www.jblaquaria.com/cart_prod...le=JBL 7 PLUS 13 BALLS SOLID FERTILISER BALLS
el Naturel set up

Itâ€™s been some time since an update so decided to put up some pics now that I have a DSLR. So nice to be able to actually focus on things!

Couple of changes. Started EI dosing now that Iâ€™ve got a pump and hosepipe for water changes instead of buckets. Having tried this I really donâ€™t know why anyone would do any different unless you have a small tank. Can do 50% water changes it about Â½ hour, and at least you can do some gardening whilst the water is emptying/ refilling. Also changed lighting to 8hrs straight without a siesta. Noticed a big drop in the amount of GSA. Still a way to go.

Picked up some bargains from greenline before it shut- some bacopa monnieri, hairgrass and anubias nana petite. Iâ€™ve planted some of the hairgrass but have left some more floating to grow roots. Iâ€™m hoping this will increase its survival and not turn into a brown mush.

Not much happening on the moss front. I think my tank is toxic to it. Ordered some mesh off aquaticmagic and will try different moss.

Otherwise everything seems to be filling in nicely. 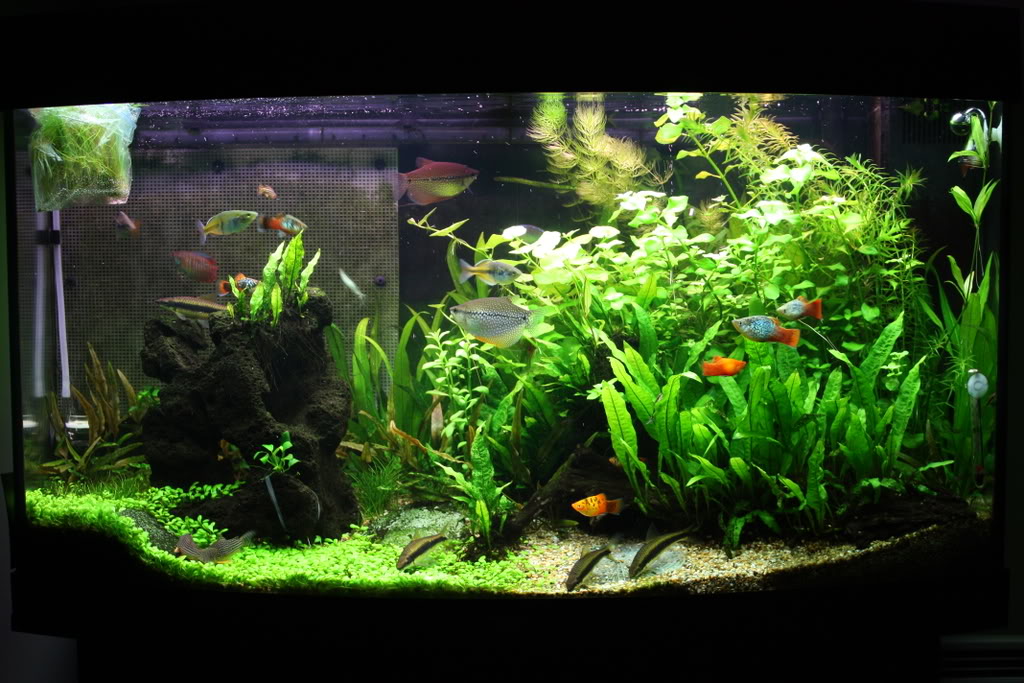 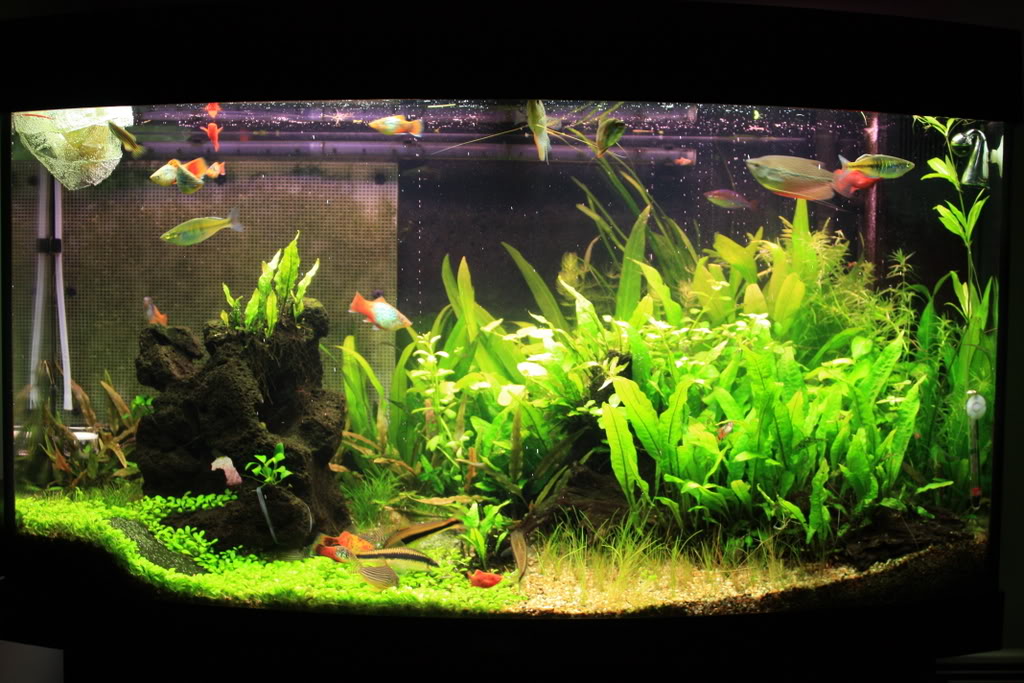 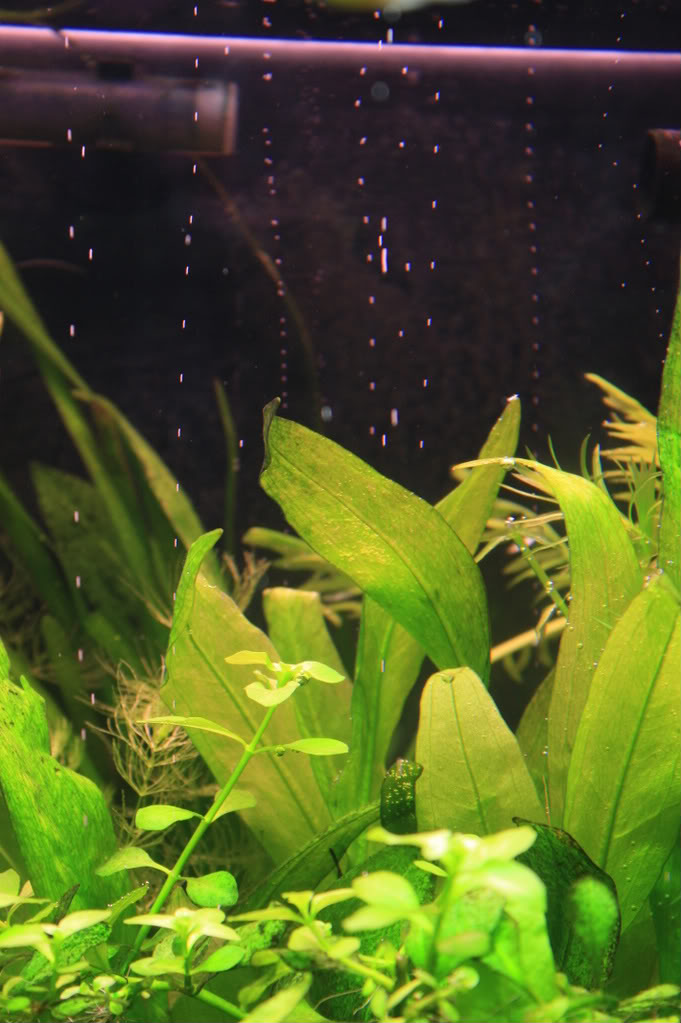 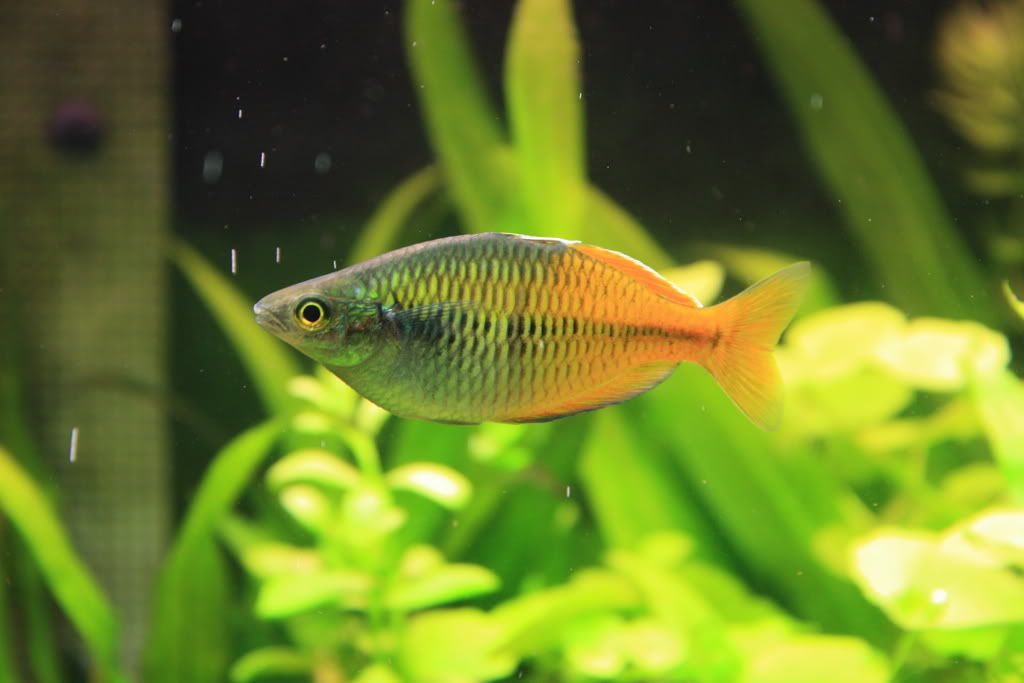 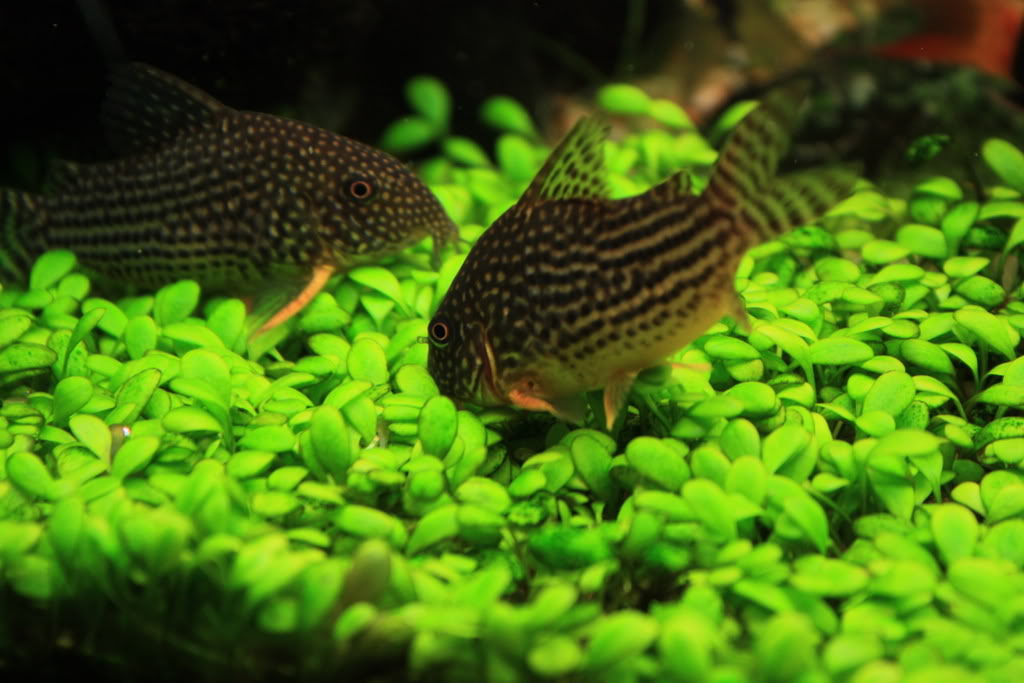 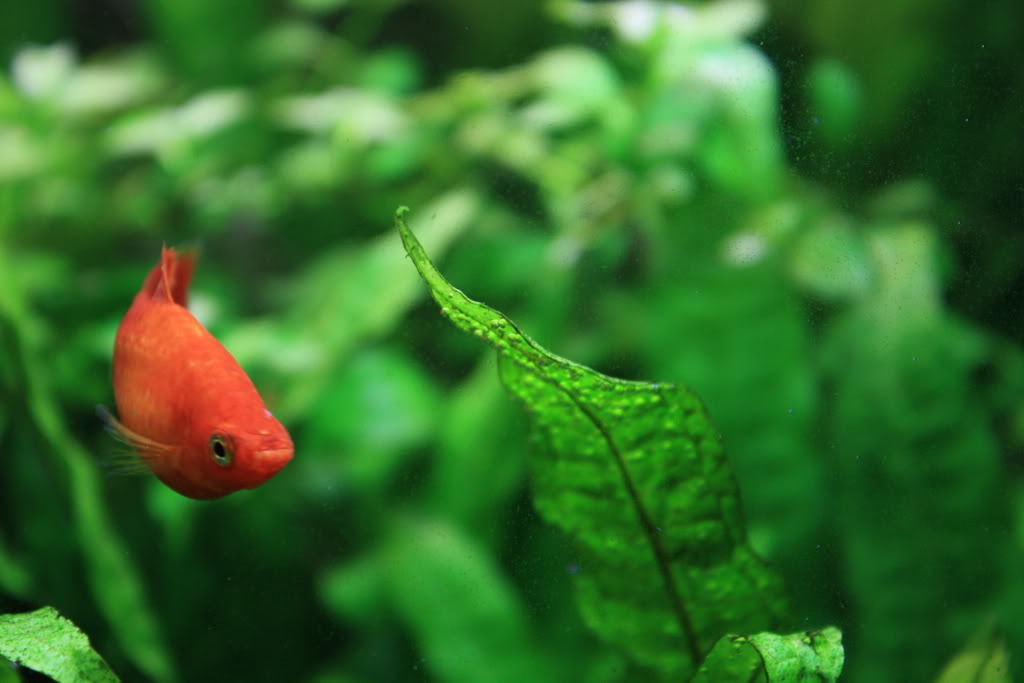 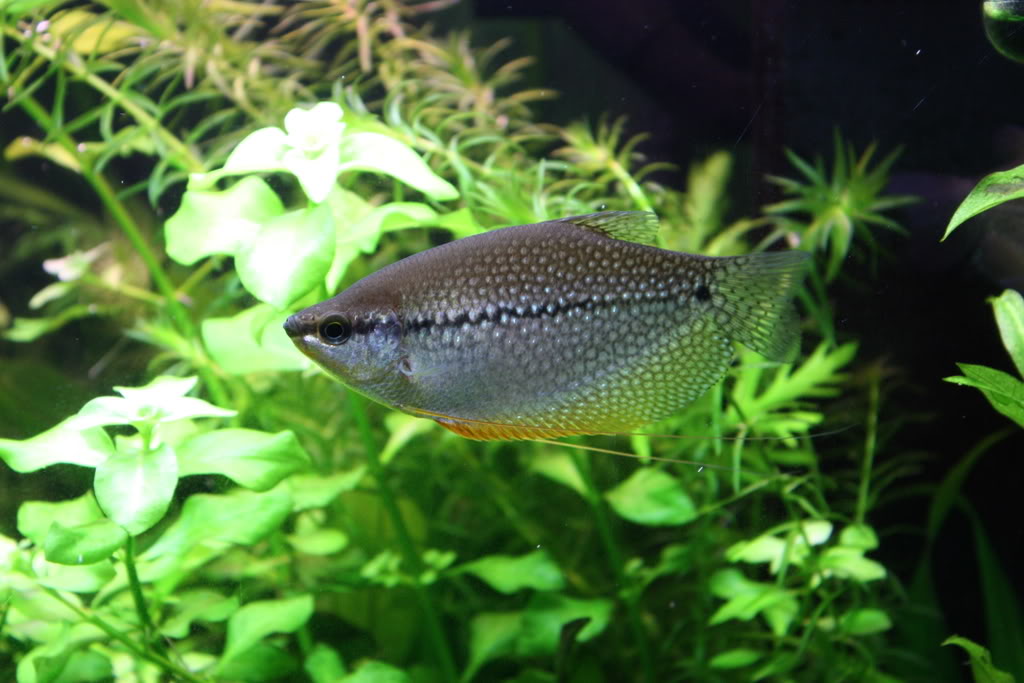 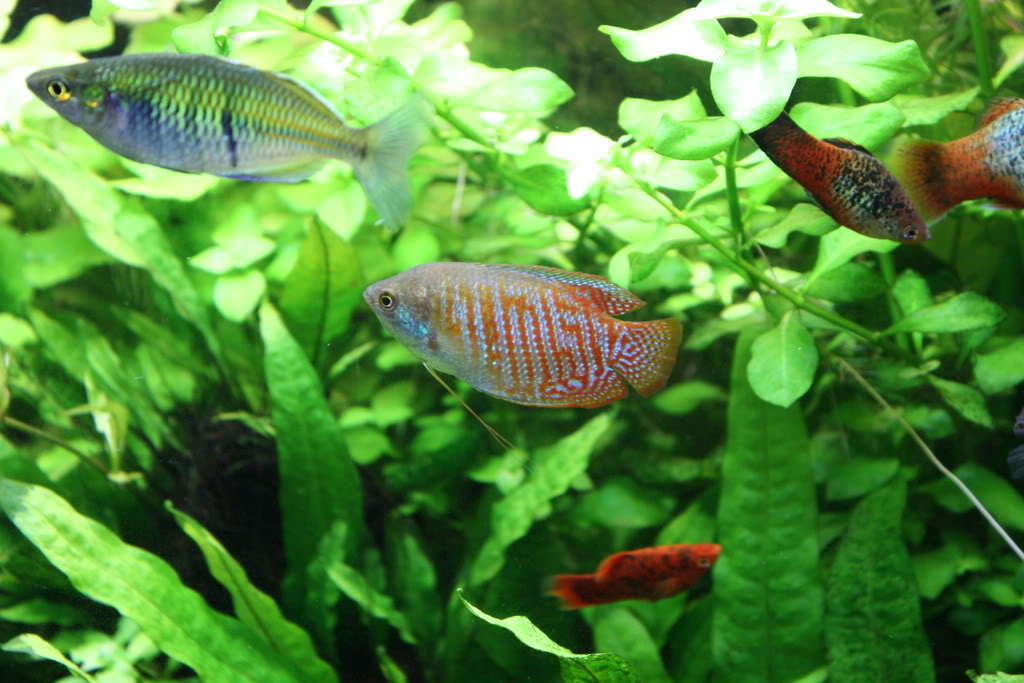 Thanks for your comments Brenmuk. I thought about root tabs but decided to see how things go with water column dosing alone. At the moment I'm happy with the growth of everything apart from the crypts, which I'm still not sure if they're half dead or not. Most are sprouting new leaves, albeit slowly. The swords are shooting up and I don't want them to go any faster.

looking nice, good pics too. The hairgrass will be better planted, the roots will eventually grow.
Aaron North
My Flickr Account | Equipment needed for setting up an FE | Algae & Nutrients

With regards to the speed of the moss growth... I have not tried xmas. But I can say that taiwan and weeping both grow fast for me. Spiky is a slower grower. and flame is a really slow grower.

aaronnorth said:
looking nice, good pics too. The hairgrass will be better planted, the roots will eventually grow.
Click to expand...

I tried floating the hairgrass as this was the advice from greenline (not there before though). I'll see how it goes but one advantage is that you can pick out the viable plants after a week and get rid of the dying ones. Also hopefully the longer root will give it a better chance of staying in the gravel and not getting pulled out. Took the time to separate out the plantlets this time as well so hopefully that will make a difference.

Londondragon said that he might have some weeping moss in a bit so might try that. I think that one of the problems getting moss from shops is that it is emersed and so takes time to adapt to submerged. Trying to be patient though .

This is beautiful! The fish look gorgeous and I adore the Glosso!

It's looking great, you're getting some nice photos too.

Don't worry about the crypts - they hate change. There's probably a lot going on under the gravel that you can't see. And if they've started sending new leaves then you're pretty much there. Just let them get on with it, and one day you'll be amazed at how many leaves they've quietly put up!

SAE's in my tank eat newly growing moss, remove them and your moss will grow, you can re add SAE's at a later stage to keep your moss in check....

Lots of changes, though probably not all apparent. 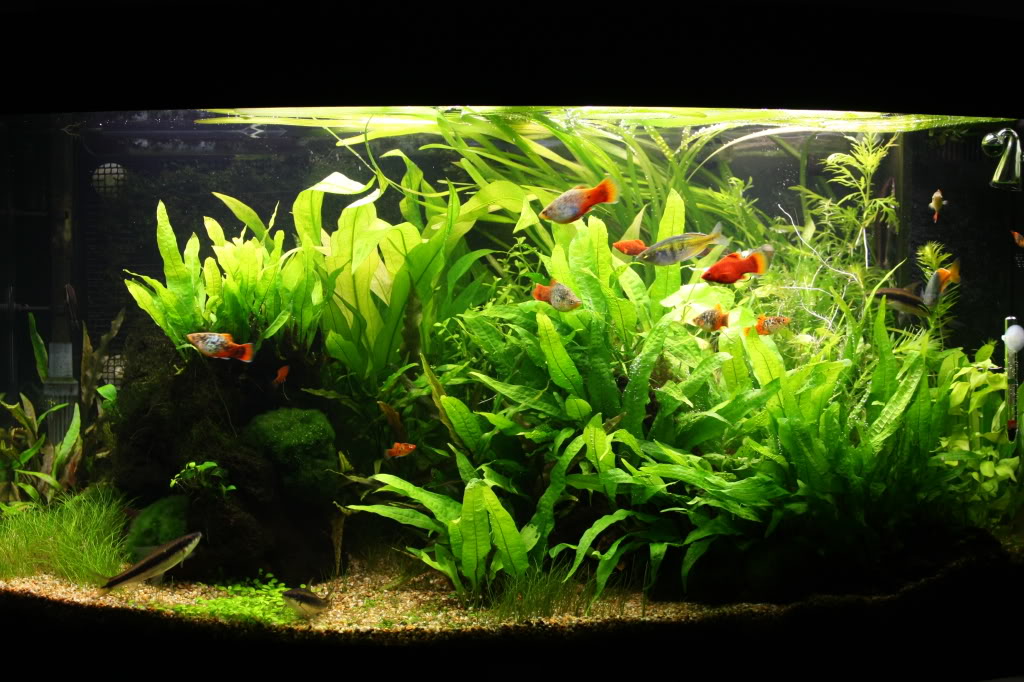 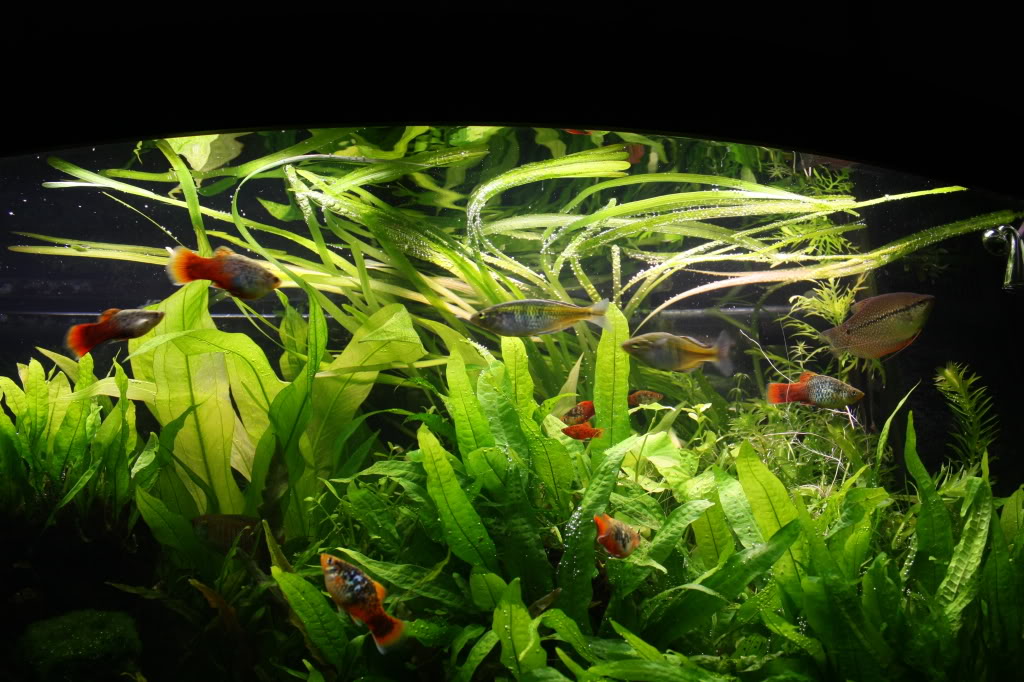 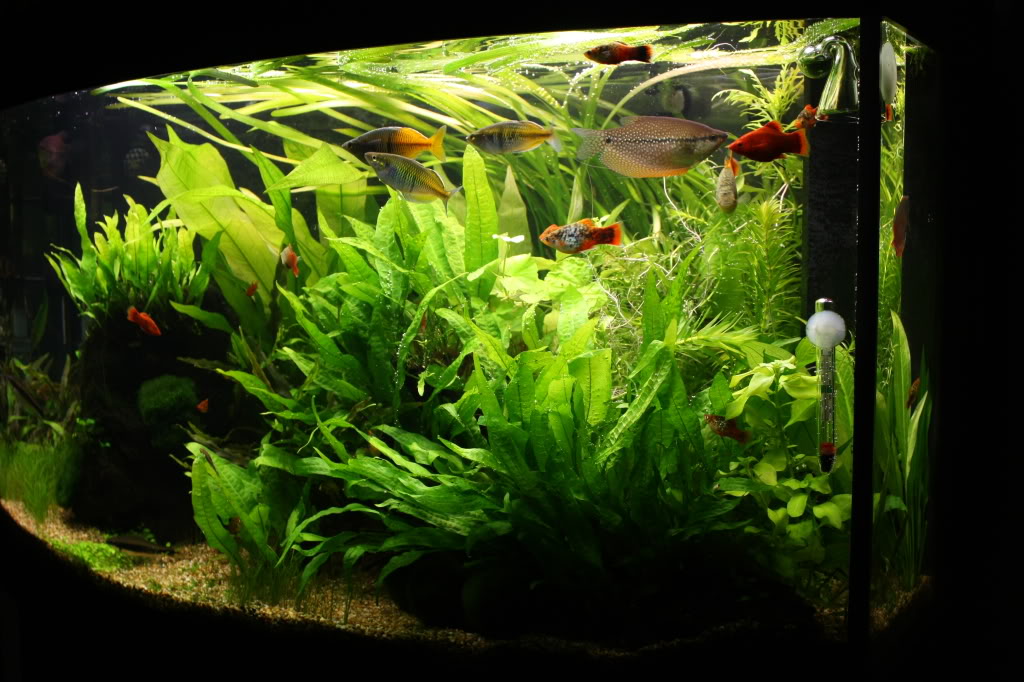 CO2- Got a bigger diffuser (Rhinox 5000) and put it at the bottom of the juwel internal filter stack. Initially used the juwel sponges, but a lot of the gas was getting trapped and not diffusing resulting in occasional splurges of gas clouding the place up. More efficient than diffusion straight into the tank though. Recently filled the filter with bioballs instead, topped with one sponge and fine filter wool. Much more efficient although can hear the fizzing of the diffuser.

Filter- Changed most of the standard filter media in the tetratec to ehfisubstrat pro.

Substrate- added some Miracle-gro controlled release plant tablets. I think that this has made a big difference as my amazon sword and crypts are growing much more. However I have also upped the fertilization so this would have contributed as well.

Fertiliser- Changed to double dose of EI. Found that growth would shoot up after a trim and that nitrates measured only 0-5ppm even if I hadnâ€™t done a water change for 2 weeks. As I said- have noticed a big improvement in growth but part of this might be to do with the root tabs.

Algae- Still having problems with GSA on the glass and on leaves. Also get black spots on the slow growers like the anubias and old java fern leaves. I think the main reason behind this is overstocking (for a planted tank). Must have a good 18-20 platies now of varying sizes and havenâ€™t managed to get rid of some to the LFS. The other factor is hygiene. Havenâ€™t managed to keep up the weekly water changes and debris building up. The last water change I made sure to suck up all debris and it is surprising how much there is. I imagine this would contribute to any ammonia in the tank.

Moss- a resolute failure, for which I blame the Siamese algae eaters and the platies to a lesser extent. I can see them eating the new shoots and so much of the moss visible is brown and dying. Behind the mesh the moss is actually green.

Decided a new approach and used a couple of cladophora algae balls as dressing for my volcanic rock. Quite like it and might use some more. Using the other balls to cover substrate in the shade as I struggled to get any hairgrass to grow there. 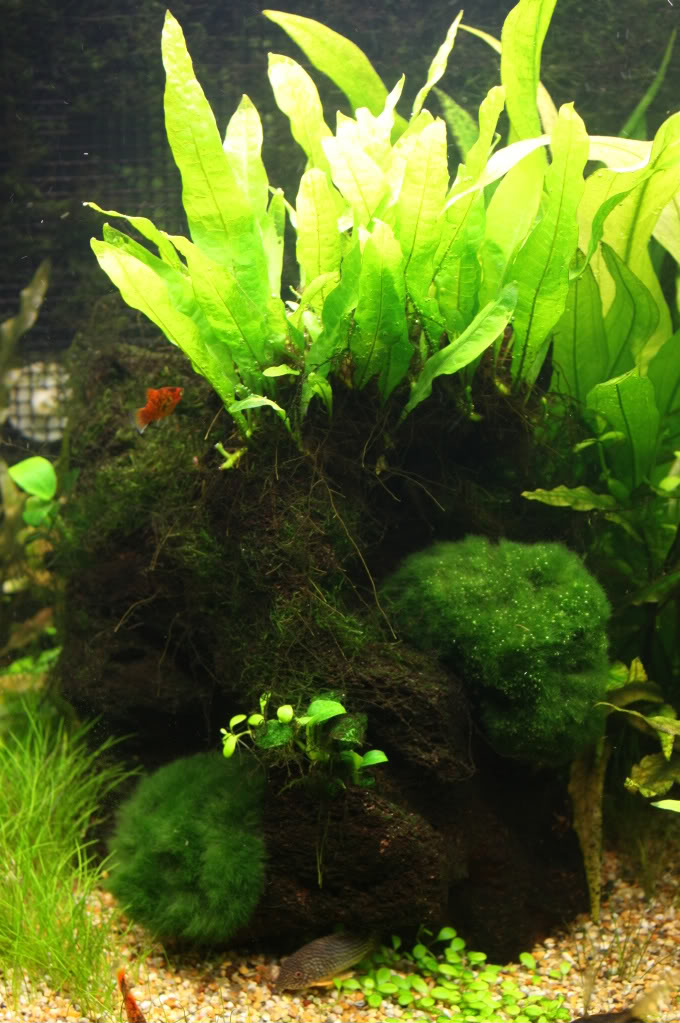 Hairgrass is doing well in the open- hope it spread around the front. Cut down on the glosso I had as it was too high maintenance and was just invading everywhere and rotting at the base. Trying out some HC to see if it will be better foreground plant. 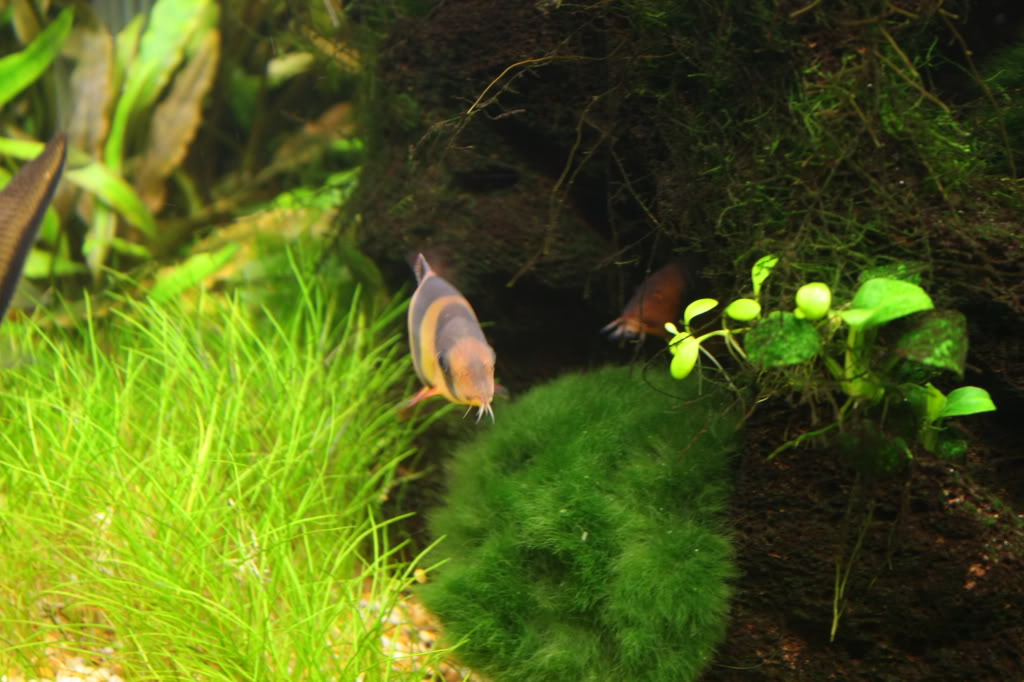 Plans for the future are to get rid of the platies and get more ottos and hopefully a shoal of harlequin rasbora.

In my next tank I'd like to have a go with some of the other varieties of fern like windelov as well as Bolbitis but no space at the moment as the java fern is taking over. Need to be a bit more aggressive with trimming. Thinking about moving the central "tower" (can't really see as covered in fern) to the right hand side to provide more of a slope, then move the stems more centrally to make them more easily trimmed to a slope shape. The shape is pretty lost at the moment.
Journal: First Planted tank- Two Towers: <a class="postlink-local" href="http://ukaps.org/forum/viewtopic.php?f=35&t=2150" onclick="window.open(this.href);return false;">viewtopic.php?f=35&t=2150</a>

jay said:
The ferns are looking really healthy in those pics. All fresh leaves. Good stuff!!
Click to expand...

Finally got around to offloading some of my platies to the LFS- got good credit for them too which is always good.

Was hoping to get some ottos however was told that there was a problem with supply because of bad weather. They had some harlequin rasboras which had just arrived and so might pick bout 12 of these up in a couple of weeks once they've settled in.

I'm hoping the lower fish load will help reduce the amount of GSA i'm getting on plants. Another factor might be poor flow due to the fact that the plants are getting tangled together. Thinking about a small shuffle around in the next couple of weeks.

One thing I noted was that some of the moss is still growing where it has been shielded. Also I fed some cucumber to my SAE the last couple of days and I'm sure that there are more green shoots on the moss. Might try it over the next week to see if I can tempt them away long enough for the moss to take hold.
Journal: First Planted tank- Two Towers: <a class="postlink-local" href="http://ukaps.org/forum/viewtopic.php?f=35&t=2150" onclick="window.open(this.href);return false;">viewtopic.php?f=35&t=2150</a>
T

THanks for the comments.

Planning a rescape in the new year. Going to move the volcanic rock to the the right and maybe get rid of the other "tower" all together. This will give more room and give a more traditional triangular arrangement. I knew the current arrangement was aesthetically unbalanced but the fish seemed to love the volcanic rock so couldn't think what to do with it. In the new arrangement there should be more open area which I hope to fill with hairgrass or HC (if it starts growing.)

As an off shoot am trying to grow some hairgrass, HC and glosso outside in waterlogged compost and then hopefully transplant it into the tank if it grows well.