Thought I'd share the journey of starting my first ever tank, including the rimless conversion I did on a 125 litre Fluval Roma. I had no experience at all with tanks, fish or plants prior to this and got a lot of great advice from people in this forum - thanks to everyone the tank is running reasonably well at this point.

Day 1 (First week of January) - picked up the tank, cleaned the glass, removed the stickers and starting using a pen knife to remove silicon from beneath the rim. 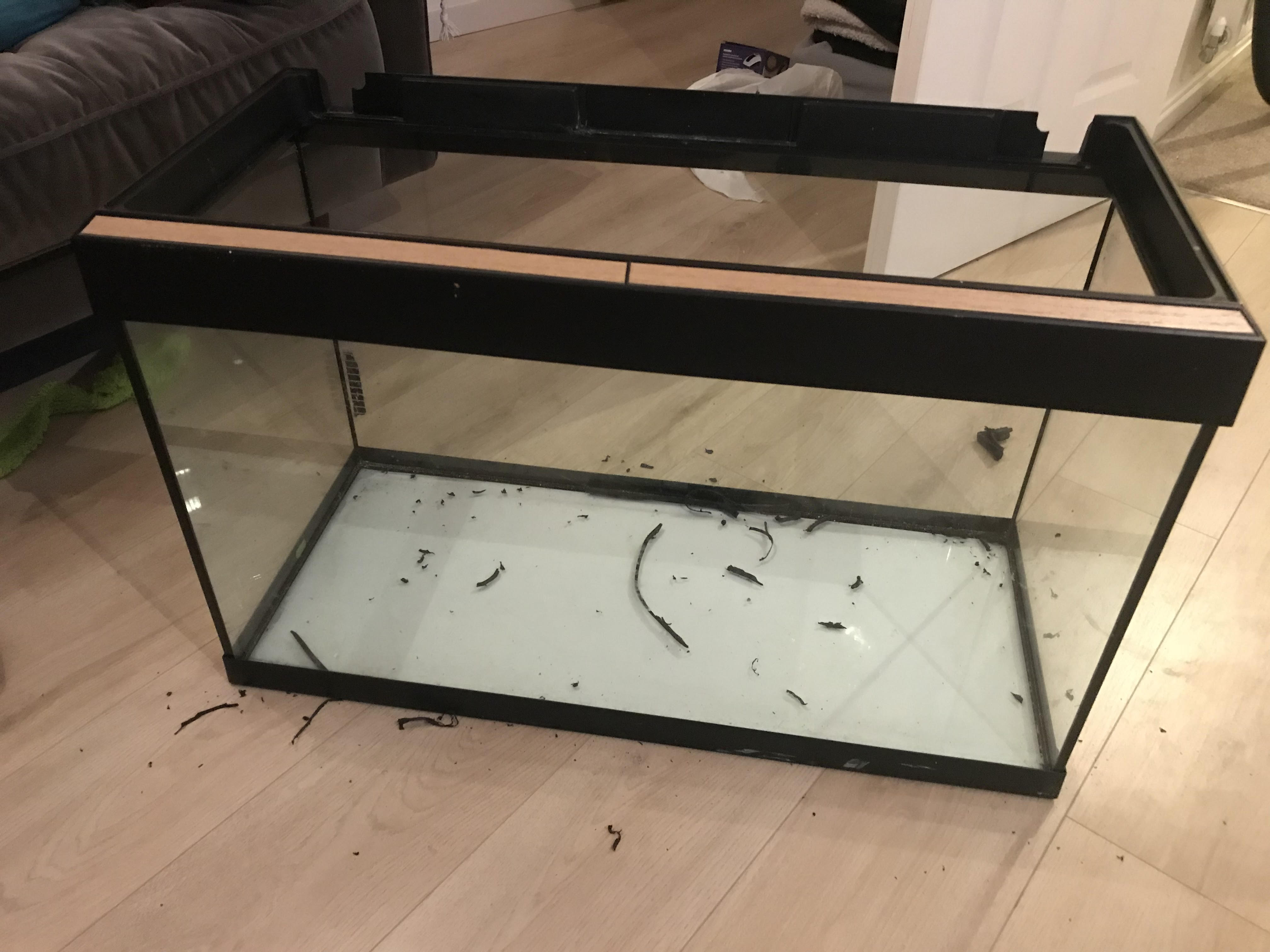 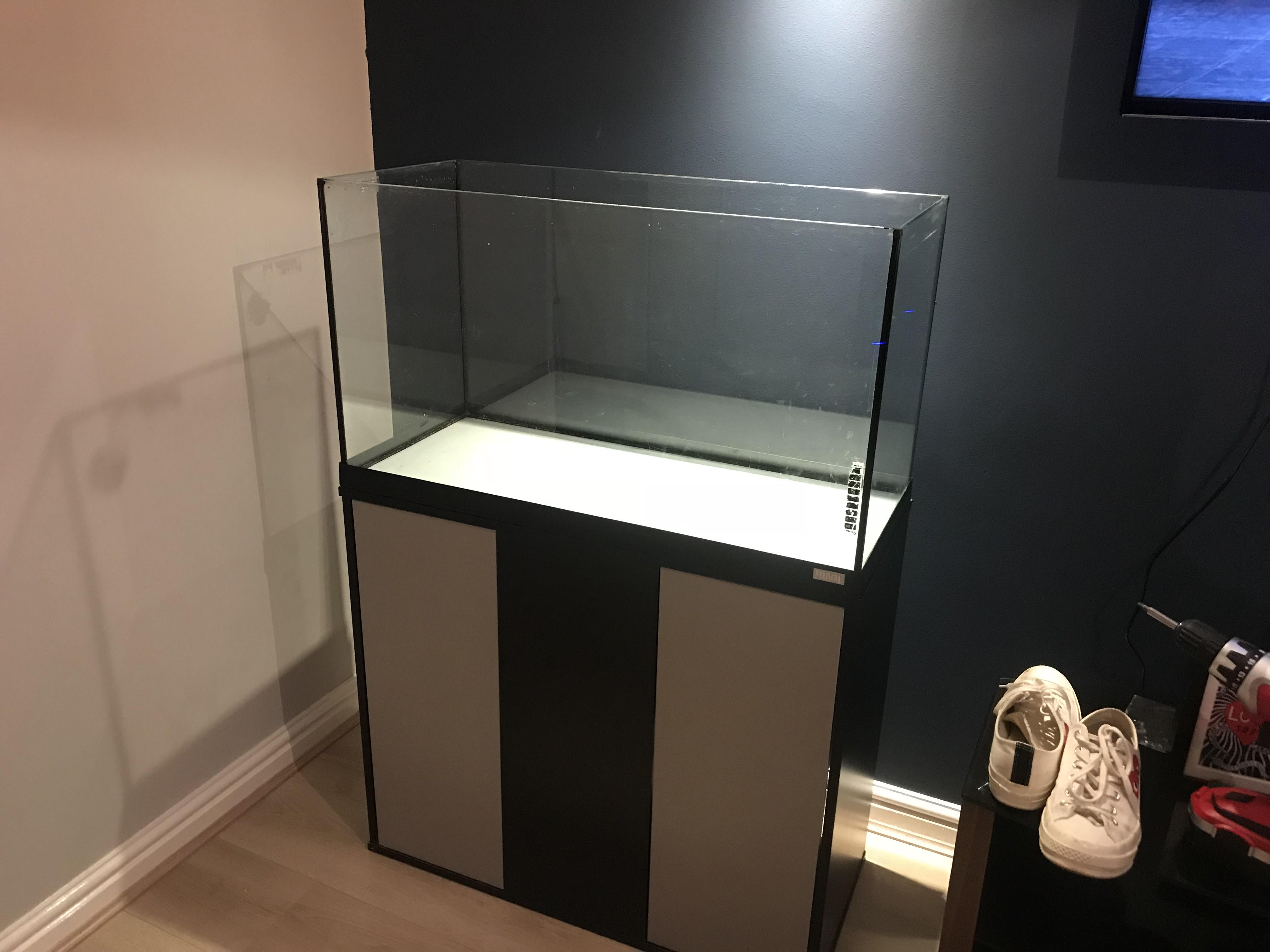 Day 5ish - filled the tank in the hallway of my home, got a very small/under-powered light. Added various floating and submerged plants, APS HOB filter. This was around the time I started vising UKAPS to seek advice. 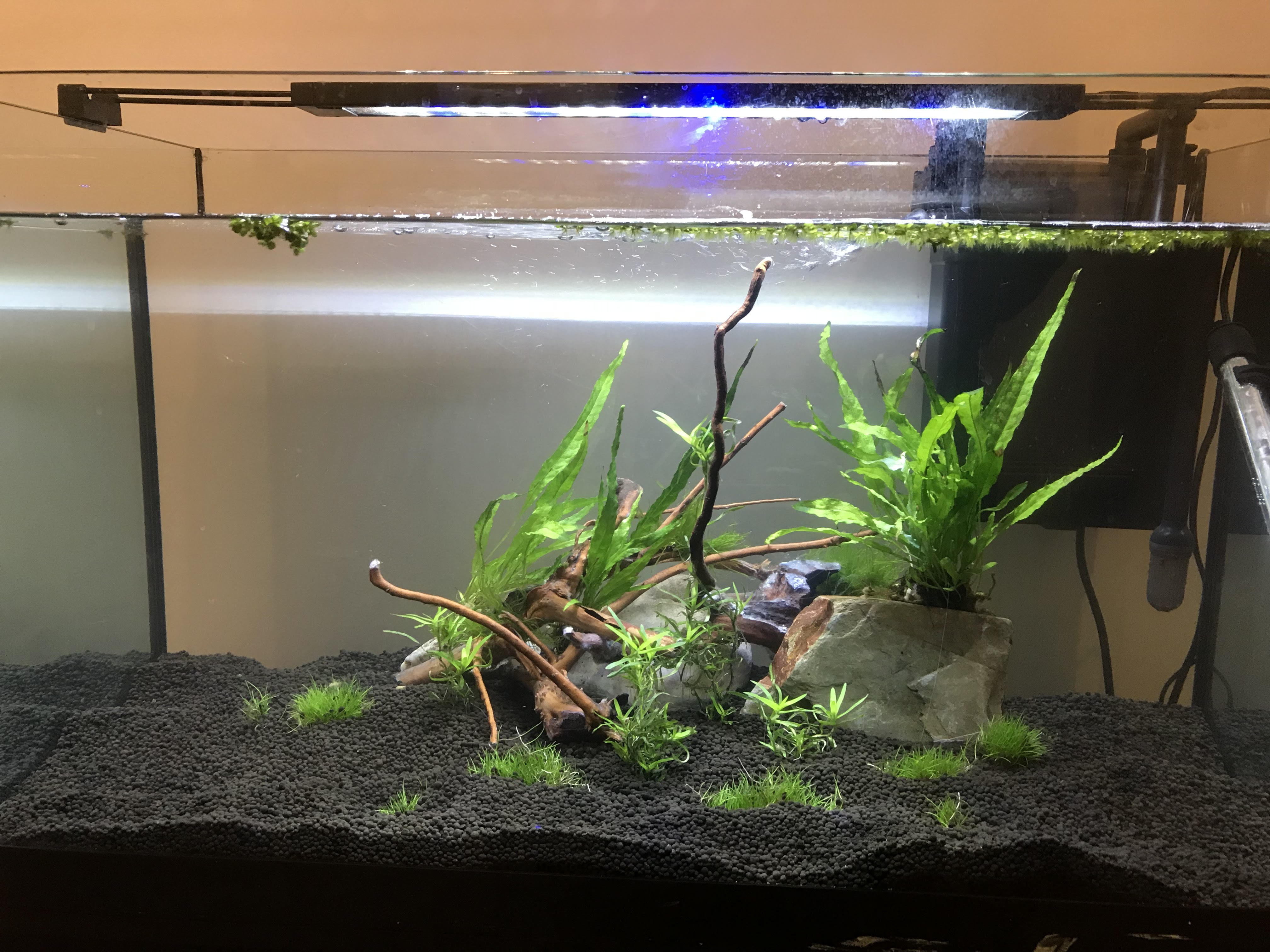 Week 3ish (Jan 29th) - moved the tank upstairs to my office, I felt I wanted to enjoy the tank fully by having it next to me while I work. This was a great idea, as I sit by it several hours a day now and watch the fish constantly. However, this was a mammoth task in moving it mid-cycle, took me roughly 4 hours. I also added a large number of plants at this stage and had replaced the light with a Fluval Aquasky 835mm.

At this stage, I started the notice an algea problem infesting my floating plants and was fairly convinced that the density was harming my submerged plants. 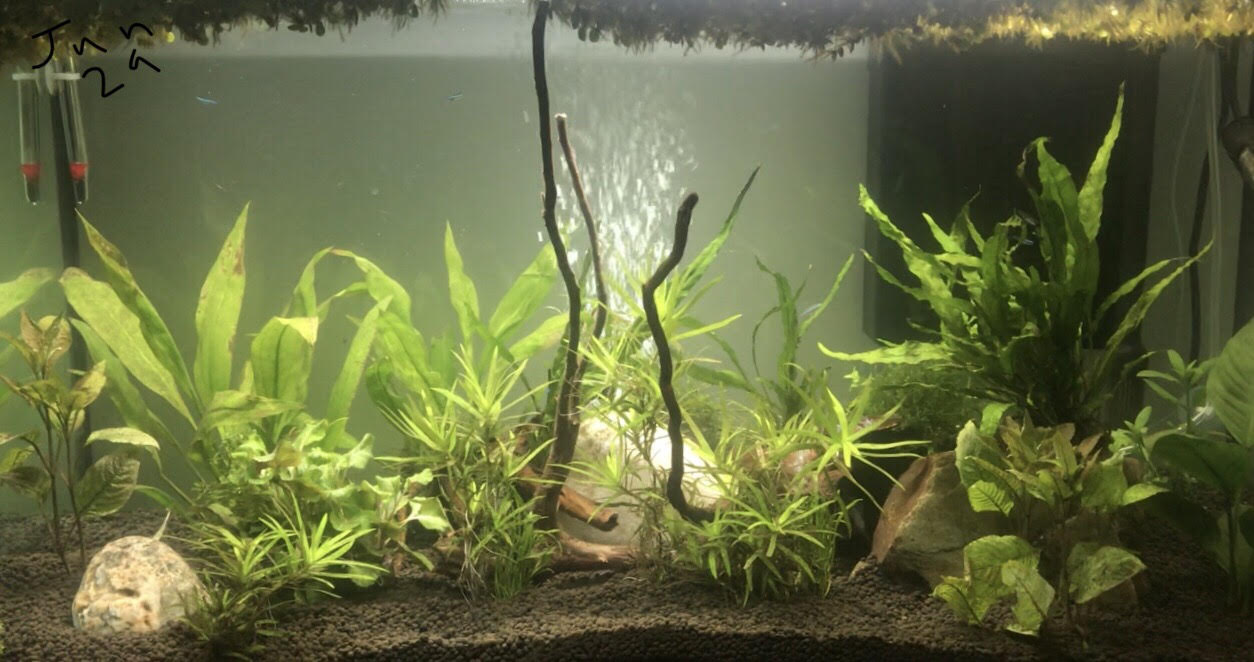 8 weeksish (Feb 27th) - by this point I had removed all the floating plants and began had been daily dosing 1.4ml of Easy-Life Profito ferts and Microbe-Lift Bio co2 Liquid Co2 ferts for over a month. These 4 weeks were a critical turning point for my plants made a huge difference, comparing the last picture you can see the growth in 4 weeks has been great. Most of the hardscape was completely covered at this point.

2 weeks prior to this at around week 6, I had added my first stock - 6 neons and 6 guppies. Unfortunately, I lost 1 guppy to jumping - he made it out of the tank onto my carpet, where my dog (Frank, the Miniature Dachshund), ate him. Naturally, I felt terrible as this is an awful way for a fish to go. After this, I decided to run the tank at 100 litres leaving around 4 inches of glass, to reduce jump risk and look at getting a lid sorted.

After around 2 weeks, I also lost 2 more guppies - they start swimming very strangely and despite my efforts could not be saved. I tried numerous things (salt baths and feeding them peas), believing this was a swim bladder issue. I am still not sure what caused these deaths. This left me with 3 guppies and 6 neons, all which are still alive and kicking at the time of writing. 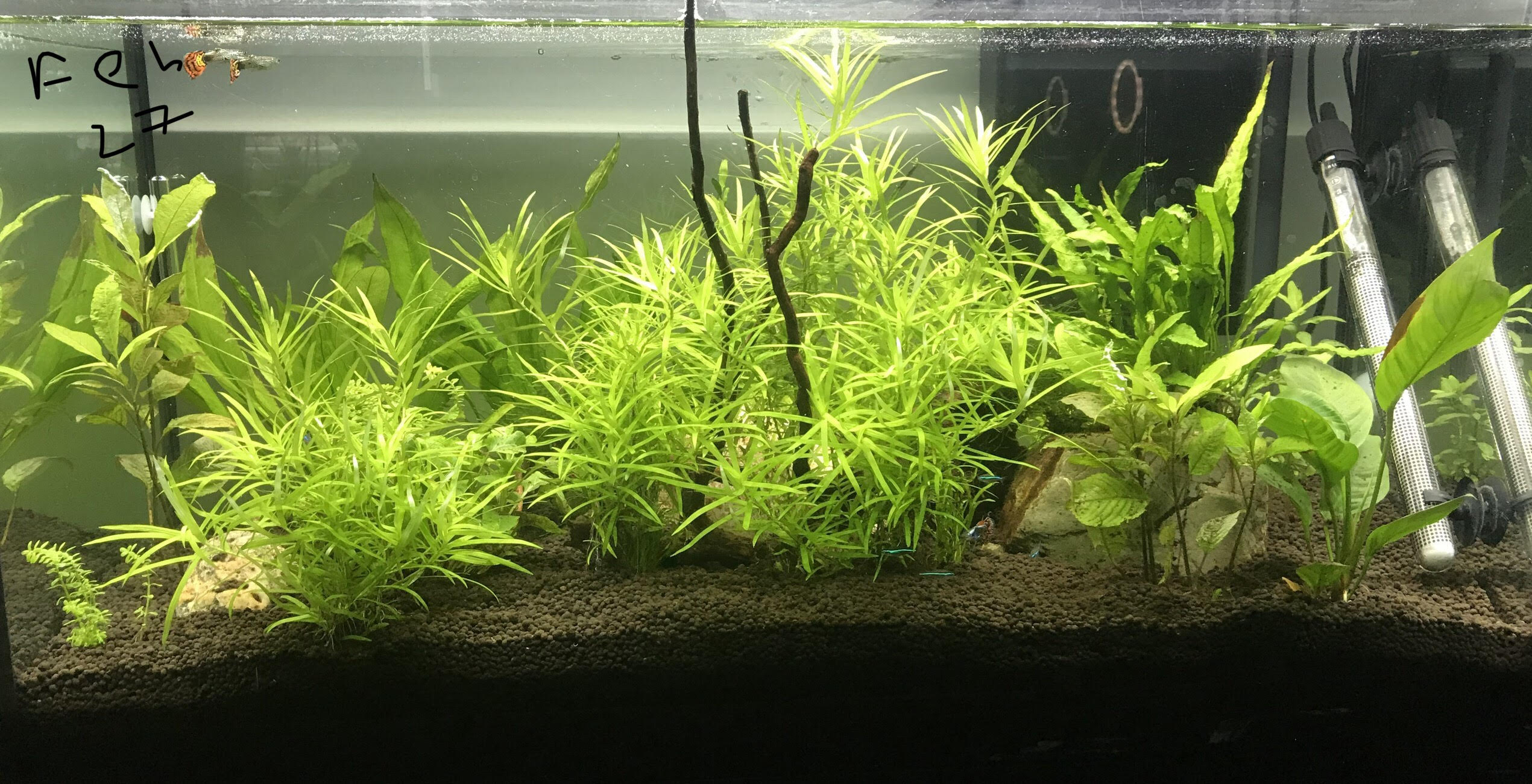 Week 9ish - Around this time I decided to add some more stock, roughly, as it been around 3 weeks since I added the initial stock. This included some more neons, a baby albino bristlenose and 2 german rams. Video below of one of the rams. Unfortunately, the other ram barely even made it past 2 days - no warning, he was fine and then a few hours later, dead. I'm aware that these are quite difficult fish to keep alive, but am still trying to work out what caused the death. 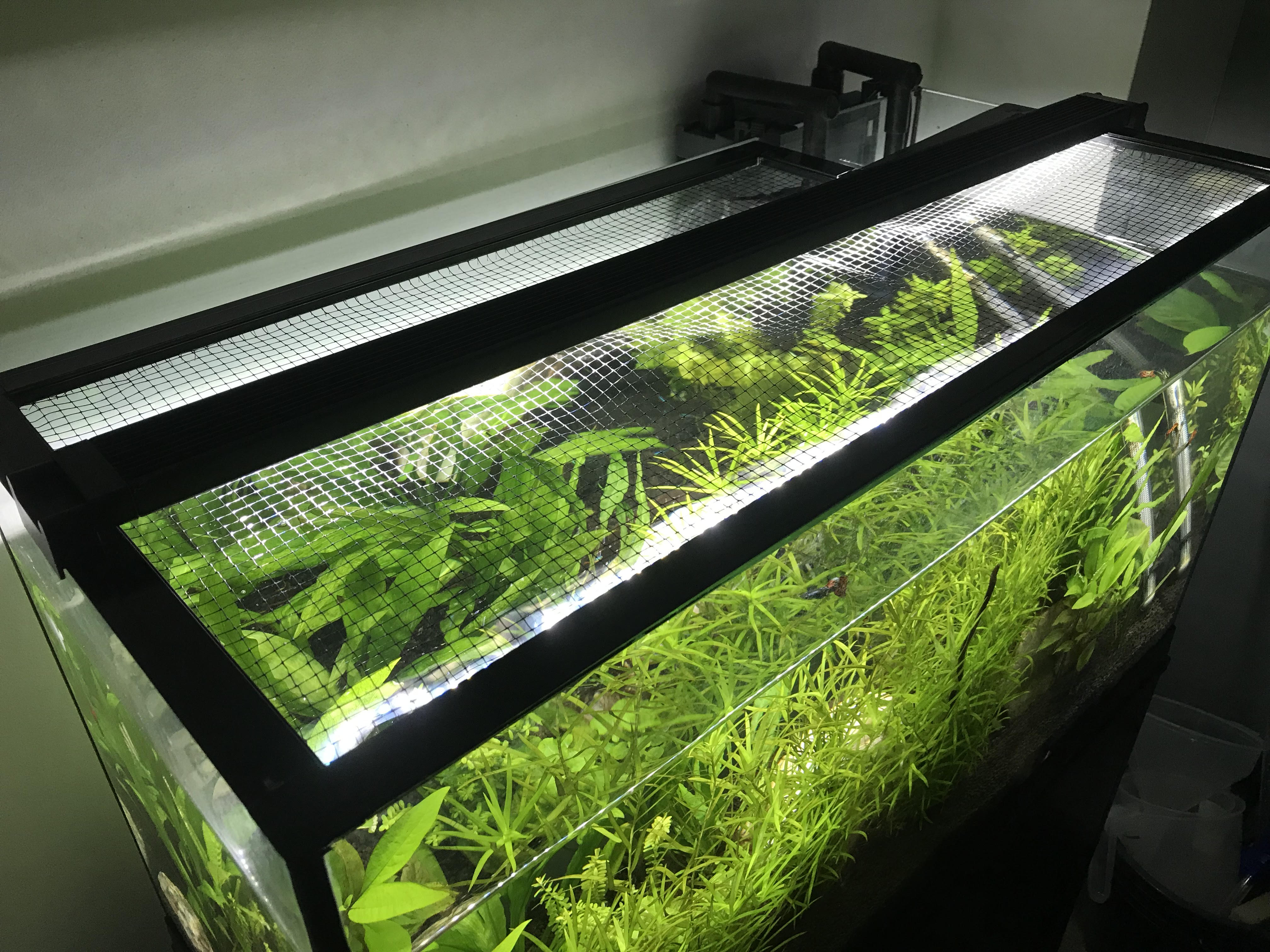 I also carried out my first real re-scape and clean/trim of the tank, removing a lot of dying leaf material, several bits of wooden hardscape and thinning out some of the plant life. This has allowed me to actually see further into the tank while still providing a good level of density and hiding places for the fish to chill out. 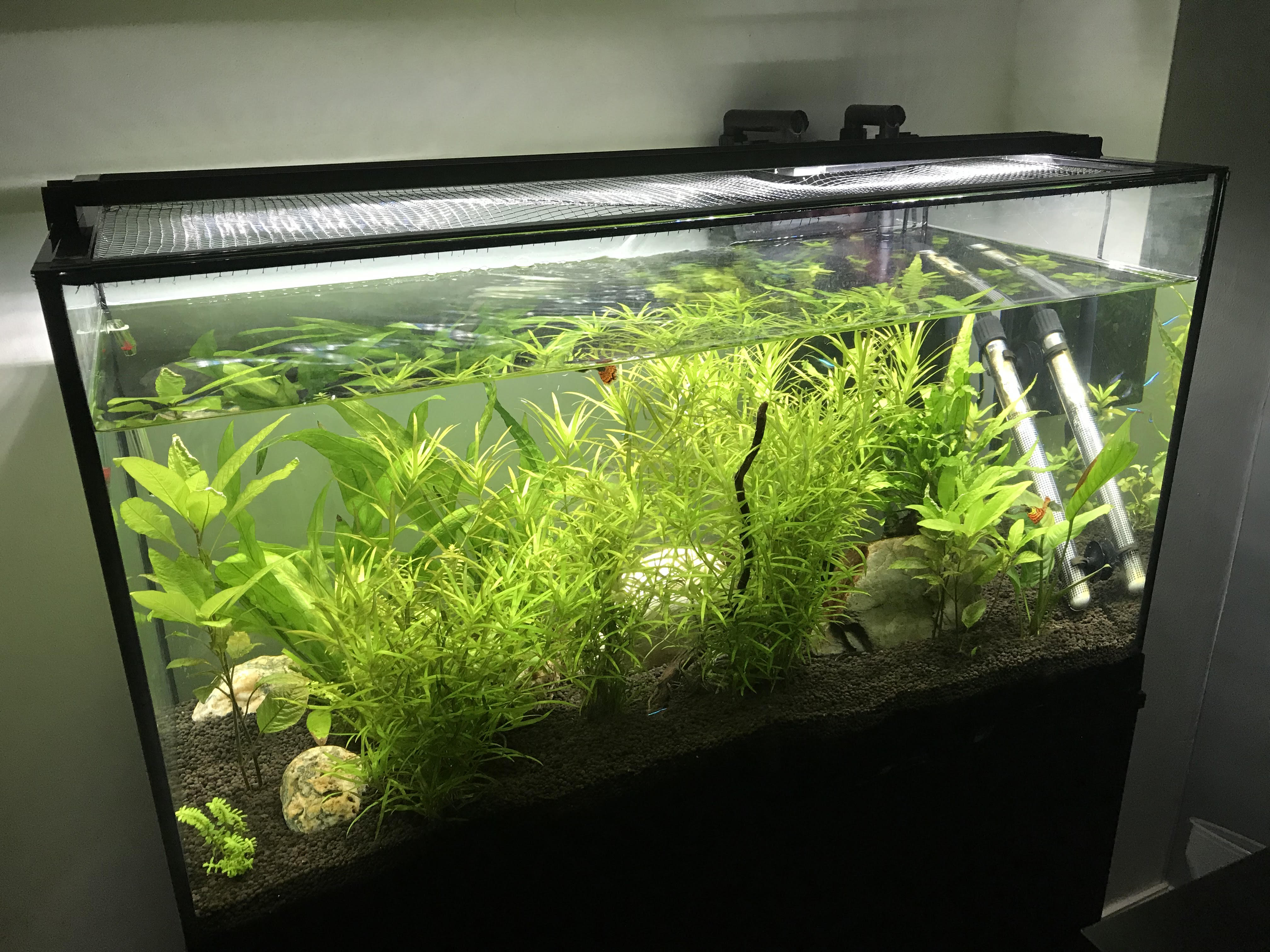 Next steps are to allow this to let the current stock settle further (another 3 weeks roughly), before I consider adding anything further.

Be careful with that without rim it might bow.. Rimless tanks has thicker glass than standart rimmed ones to support the pressure weight of the water.
Main display tank. Betta tank. Natures hideout.
Insta. Flickr.
O

DeepMetropolis said:
Be careful with that without rim it might bow.. Rimless tanks has thicker glass than standart rimmed ones to support the pressure weight of the water.
Click to expand...

Indeed, I addressed this in another thread. It did bow quite considerably when I was running full at 125 litres, however I'm currently running at 100 and the bow is minimal. The tank also has 6mm thick glass, which is more than thick enough to sustain itself under the weight. I confirmed this via several glass thickness/safety ratings calculators used for making your own tank, which have told me that I need 4mm minimum at this tank size, 6mm puts me in the 'very safe' range. Hopefully, no accidents will occur!
A

The black silicone is reputed to have higher tensile strength - but this is older data so not sure how this compares with current rimless silicone methods
You must log in or register to reply here.
Similar threads