Thinking of doing a bit of a Reshuffle of my tank within the next few months. It's a bit of a mish mash of different species and doesn't make for a very natural display. Planning on keeping my two corydoras species, 8 x duplicareus and 6 x gold lasers. Apart from that I think I will move on every other species. However I'm struggling of thinking what I should put in with these corys. Ideally I'd want a small colourful shoaler to add some interest to the upper layers, something different to the bread and butter species would be nice. Also will have to be shrimp safe as planning on keeping my cherrys and tigers. Also wouldn't mind putting in a feature fish like a whiptail or something similar if space permits. Any suggestions guys?

Cherry barbs would fit the bill, very cool little fish and stunning colouration on the males.

Thankyou for the suggestion, unfortunately that's one of the species in getting rid of lol.

Anyone else got any suggestions? Was thinking maybe hyphessobrycon heliacus, kitty tetra. Anyone kept these?

Neon dwarf rainbow fish are really nice once they settle in and colour up. My initial thought was your tank might be a little small but Seriously Fish says they would be ok in 60x30.

One Pacu - a youngster of course

PARAGUAY said:
Research a bit on Pencilfish pretty sure they would be a good choice
Click to expand...

Was thinking about pencils, like the look of mortenhali but seems they're pretty aggressive towards each other?

Those with the heliacus would look nice and keep it to a Amazonian type tank. There seems to be a lot of new tetras coming on to the market. Peugeoti and wasabi look great. Prices are high currently but will hopefully drop if they start getting bred in numbers.

You can find good quality pencilfish, just look carefully at the fish before purchase
Last edited: 3 May 2019

I keep four female and two male golden pencilfish. They have the most vivid colours when breeding, which is triggered by clean fresh water changes. During these times they divide the tank up and spar-dance in a very unique and beautiful way. The males point their tails upwards and rub against each others flanks as they both ascend. It reminds me of the birds of paradise. When the water becomes more established and vegetated they prefer to shoal together. Mine are universally non-aggressive towards any other species now that they have settled in, and will only chase cherry shrimp in confusion with their own species, once in a blue moon. The females prefer surface feeding, and all prefer live foods: springtails, Drosophila melanogaster (fruit flies), grindal worms, California blackworms, and occasionally brine shrimp. I note that many people have expressed concerns over aggressiveness and breeding issues. I actually keep a blind-born vegetarian miniature ram (species unknown) with my pencilfish and she is completely ignored as she randomly travels around the tank, occasionally running into them. They are a great choice. However, there is actually quite a lot of genetic uncertainty about these fish, and even N. beckfordi has a considerable number of subspecies. I suspect this has given rise to the uncertainty about behaviour and colouration. I actually agree with Alto, but I do not think you will be able to spot duff fish because they can look the same and be genetically totally dissimilar from one-another.

A small schooling fish for upper water levels is the glowlight danio. They are incredibly energetic and this is why we cannot bring ourselves to buy them. Although they are beautiful, they never slow down enough to let you get a look.
A

Read through The Celestial Swamp first

Of course I will need to capture the few Glowlight Danio that terrorize the other fish and move them to the sump where they can spend the rest of there days patroling for planaria etc.... maybe then it will be a little calmer and happy up there...
Click to expand...

Note this is not a unique observation ... perhaps one just needs to keep them with bigger badder fish

Page 11 of The Celestial Swamp (above) and it's interesting to read that many people felt this way about the glowlight danio. The journal was a classic, and a very enjoyable read. I feel a little bit more inspired, but wow did that tank throw up some huge challenges.

You can find good quality pencilfish, just look carefully at the fish before purchase
Click to expand...

This seems to be happening with so many species. I recently purchased some luminatus rainbow fish, a fish which hasn't been in the hobby long. The quality of them is crap. For a fish that hasn't been around long it appears poor breeding has already affected them. Seems similar to the celestial pearl Danio situation.

I'd rather buy wild caught species If available. I thought for the price the coral red pencil fish were coming in at they'd be wild however will probably swerve them if they're inbred hormoned up fish. My experience is fish like that don't last very long.

Your fish hunt inspired me to wonder through Aquarium Glaser FB (& website fish postings) - one species (sorry don’t recall name) hasn't been in the hobby long, breeding attempts worked very well for F1, not so nice in F2 and mostly culls in F3, inbreeding was not an issue, nor any other obvious parameters

dean said:
There are lots of stunning rasboras species if you don’t mind mixing

Was definitely something I was considering, espei look like they'd fit the bill.

Any others you would recommend?

I don't know how available they are over there, but I really enjoy chili rasboras, Boraras brigittae. They are tiny, bright, and no threat to shrimp fry that can make it past a week or so.

Conort2 said:
Was definitely something I was considering, espei look like they'd fit the bill.

Any others you would recommend?

Espie are just as easy to find as the standard Harlequin 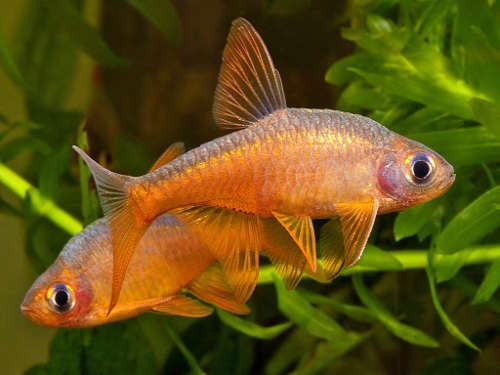 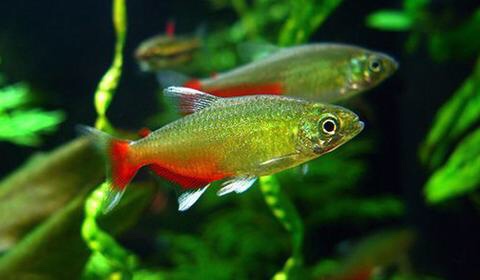 dean said:
Boras Brigittae are very small and can be tricky to feed as you need really small foods
Click to expand...

FWIW, mine are fed flake and occasionally spawn in my tanks. Granted, they are likely getting more than a few live shrimp fry (as well as their own, possibly). I used to fuss with thawing Cyclopeeze and baby brine and at some point just stopped offering anything but flake and they took to it well. Now if I had started them on flake foods, who knows if I'd even have any now. Perhaps the frozen foods helped them acclimate, but I pretty much treat them like guppies at this point.

Chuck Turtleman said:
FWIW, mine are fed flake and occasionally spawn in my tanks. Granted, they are likely getting more than a few live shrimp fry (as well as their own, possibly). I used to fuss with thawing Cyclopeeze and baby brine and at some point just stopped offering anything but flake and they took to it well. Now if I had started them on flake foods, who knows if I'd even have any now. Perhaps the frozen foods helped them acclimate, but I pretty much treat them like guppies at this point.
Click to expand...

Sent from my iPhone using Tapatalk
You must log in or register to reply here.