I've seen some confusion across various forums about some of the rarer species of fissidens that are used in aquariums but particularly regarding fissidens splachnabryoides. This species was subject to a lot of discussion a few years back when there was more of a craze for aquatic moss and many of us were drooling over impressive displays created by companies like bioplast in Singapore using 'fissidens splachnabryoides' or 'mini fissiden'. But google search turns up a lot of old thread where people question whether fissidens splachnabryoides can even be grown submerged at all in the long term and many report that it can't.
This is largely due to it's rarity and the fact that even before brexit it was very, very, hard to source. Many people who concluded that it wasn't a true aquatic or couldn't adapt to growing fully submersed had bought it from a particular ebay seller in the far east who was essentially just scraping up random bits of moss from the ground in order to meet the sudden demand from westerners willing to pay 20$ for a tiny square of moss. As a result it seems a concensus emerged that this plant either couldn't thrive in aquariums or for some reason tended not to and wasn't worth the trouble.
I managed to source some of the genuine article twice, once from a now closed aquatics shop in croydon, and once from a fellow hobbyist in france. To the best of my knowledge this ultra rare species has never been available from any retailers in the UK although these days you occasionally see very small quantitites of the real deal available for a premium on sites like premiumbuces.com and from some other european sellers.
For whatever reason I was particularly captivated by those bioplast tanks I mentioned earlier and this moss became something of an obsession of mine so I just want to clear up some of the misconceptions I've seen now that I've been growing it successfully in a range of diffierent conditions.
First of all, it absolutely can and does grow fully submersed without any problem. I actually grow it both fully submerged and emersed in my vivarium and it doesn't even grow much faster emersed. This is actually one of relatively few fissidens species that does fully adapt to submerged growth. What I mean by this is that it remains short and bushy when grown submerged, spreading leterally across wood or stone rather than pushing out messy eteliolated upwards growth as many of the other fissidens sold for aquariums by unscrupulous collectors on facebook or ebay will.
It doesn't even require a high tech setup and grows just fine with low light, no c02 and minimal ferts but it grows SLOWLY. really, really slowly - even under optimal conditions.
I'm propagating it on small pieces of lava rock until I have enough to do a full nano scape and the pictures below should give you some sense of just how slow growing this species is.
The first picture was taken on the 5th of May this year shortly after I had tied a few pieces of emersed growth to the rock. The second picture is of the same rock but was taken yesterday. Please excuse the poor quality of the pictures. I'm growing this in very soft water now but before I moved house I was also growing it in absurdly hard water with a very high iron content and it only seems to do marginally better in the very soft water. Similarly co2 injection and heavy ferts doesn't seem to have much impact on the growth rate. 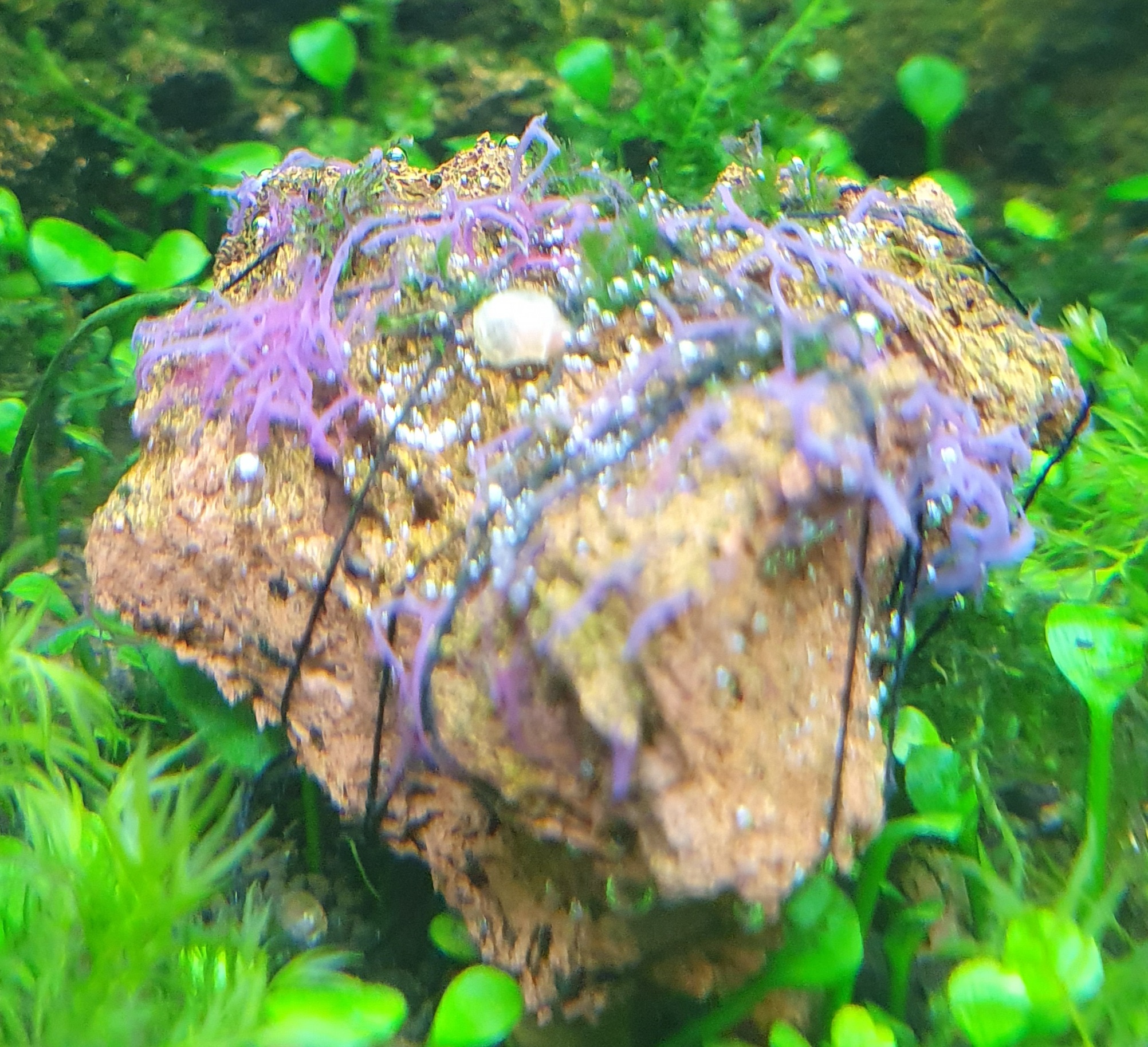 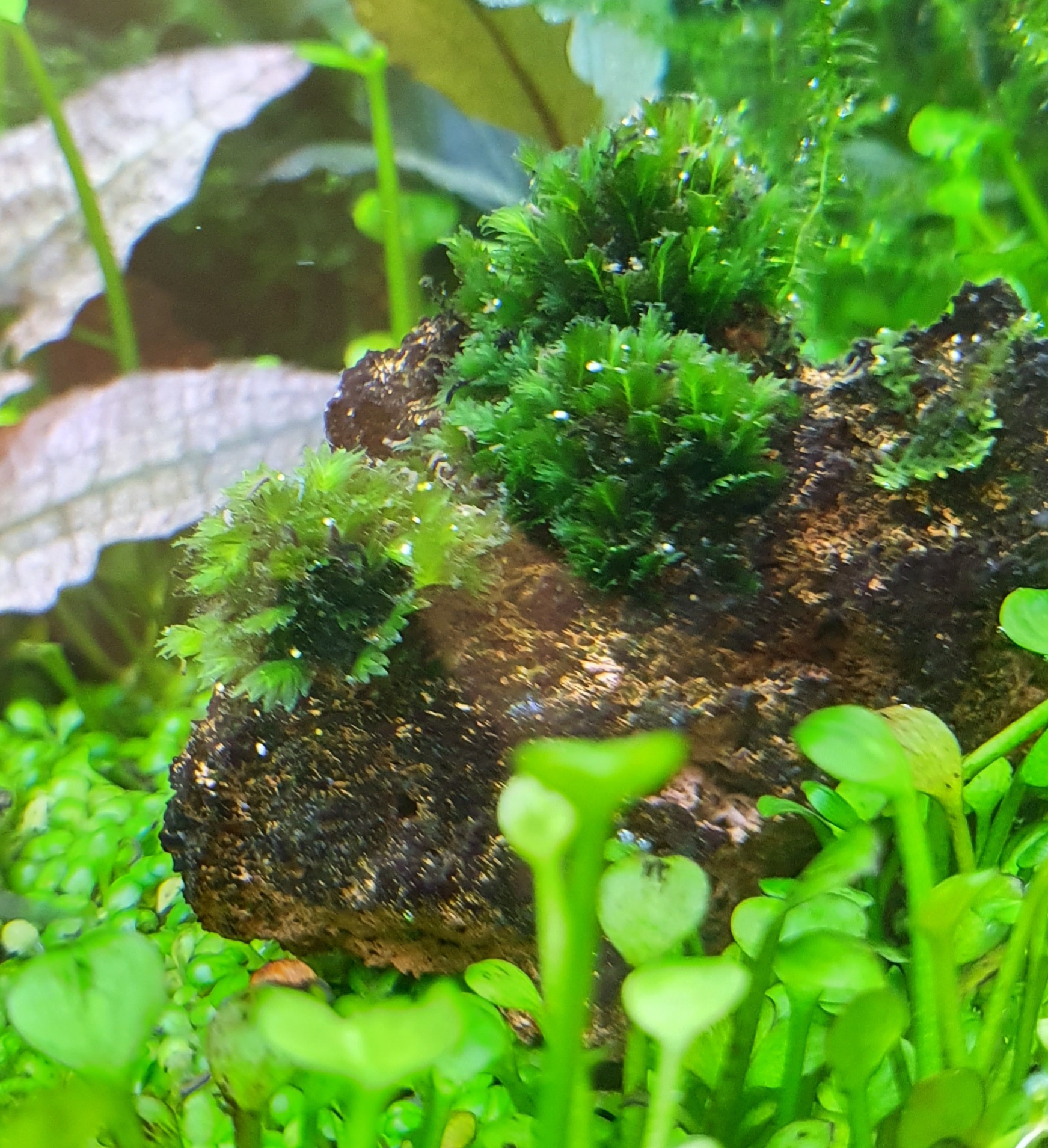 The pink stuff in the first picture was staghorn algae that had been oxidised. The reason I propagate this stuff on small pieces of lava rock is so that I can remove them from the water for a few hours to kill any algae that starts to take hold, it turns pink once it's back in the water and shrimp and snails make short work of it. Staghorn isn't generally a problem but for some reason it seems to like 'fresh' pieces of lava rock.
In the second picture there are actually two species, F. splachnabryoides is the smaller, darker species on the right. I actually don't know what the other is but it looks like possibly what is given the trade name fissdens 'mallorca'.
Anyway I just thought some of you might be interested to know that the species definitely does thrive submerged. Unfortunately I still don't have enough to share at the moment but if you're determined you might be able to source some from Germany or elsewhere.
You must log in or register to reply here.
Similar threads