George Farmer said:
Yes, you said it before. Thanks - again.
Click to expand...

​
Then you should have done something about it when you went into destructive mode . Some people never listen .​
​
Thomas​
Green Ravine 75x45x25
Alpine Gardens 75x45x25
Japan through the eyes of an aquascaper

I listened to you, but didn't agree.
www.georgefarmerstudios.com

George Farmer said:
I listened to you, but didn't agree.
Click to expand...


I am insulted and now fear retribution .

To be fair, I can't see these triangles you speak of Thomas. I can see the one triangle, which makes the scape pleasing to the eye.
life is like a pot of HC

I didn't mean to hijack the thread with this and hope I don't come across as overly critical.

But what I mean is that the slope creates an almost perfect 45 degrees angle that divides the scape in two triangles: the other one is the space to the right where there is no hardscape and plants. Makes sense?

I value your comments and critique - thank you.

I like the two triangles - one full, one empty. I guess they're too symmetrical for you, which is fine.

I don't want folk to think they can't post any constructive criticism on here. I post enough on others' journals, but I do make an effort to ensure the feedback is as constructive and comprehensive as possible.

Good to hear. I usually mainly comment in threads when I have something to offer in terms of critique. This may of course create a certain "grumpy" bias . I can live with that . For me the whole purpose of a site such as this is to be a forum for learning (and it is excellent for that). Back patting is nice (we all need that), but critique is what pushes us ahead. I expect the same when I post something.

And, yes, it is the symmetry I am after. But, as you suggest, this is subjective.

I was having a nightmare with algae...

The algae was almost only amongst the moss, and is a green fluffy type, similar to really short blanket weed you find in ponds. It's not obvious until closer inspection, but with this aquascape being shown off to the aquatic trade at Aqua Telford - it's not a good advert for an aquascaper's reputation!

I think the big overhaul I gave the tank after my accidental wood moving etc. (see page 8) really messed up the balance.

So I gave it a 48hr blackout, which made no difference whatsoever.

With only 2 full days left until I move the entire tank complete with aquascape to Aqua 2013 (Telford), I resorted to emergency measures and added 8 juvenile Crossocheilus siamensis (Siamese algae eaters). They're only a temporary measure as they'll soon outgrow the tank. I have a colleague with a 180cm who's happy to re-home them afterwards.

They went in yesterday afternoon and right away went to work... 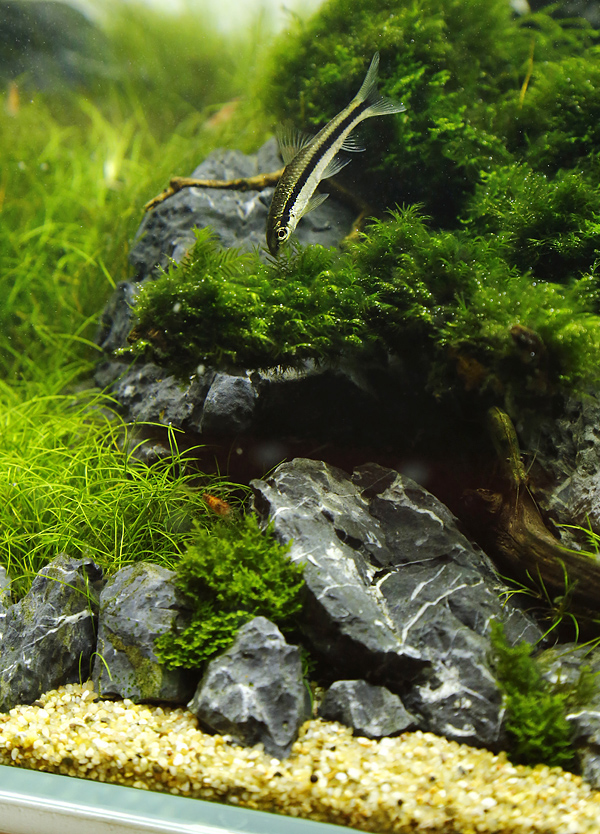 And this morning the tank is already almost totally algae-free. Thanks to Ian Holdich for the idea!

I'm not normally a fan of using algae-eaters to solve algae issues in the longer term, but in this unique case of having a deadline to reach, it's been a great move. 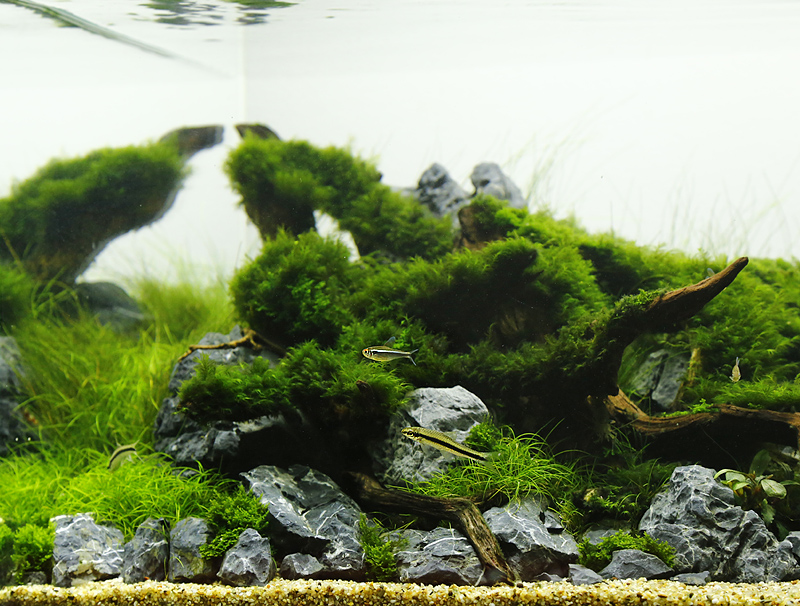 I'll be doing 60% water change today and tomorrow. Then on Tuesday 8th Oct I'll be preparing the tank for the 110 mile car journey.

It will be interesting to see how the tank looks at the other end...
www.georgefarmerstudios.com

Great news george.... were a few stress relieving push ups involved during????
They're great little fish (when small) and always constantly munching away. Shame they dont stay like that.
Looking forward to seeing this in the flesh Tuesday
1400 litre chocolate lake
Lava Negro
A 'little' box of chocolates
A Chocolate Puddle
Mini Nano
My 5ft jungle
Diy inline reactor for FX5

George, regarding algae, what about an overdose of excel for 3 days? Wouldn't you consider it?

I don't think ODing Excel might be a good idea as I believe George has added CRS and I'm not sure what effects high doses could be caused to them, probably negative ones.
Not the best looking aquariums as I'm still a novice in keeping aquatic plants but I hope yous can follow my progress,
cheers,
Michael.
Low Tech 30L Betta aquarium
Low Tech 30L Shrimp aquarium
Orchids

Its good to hear that you have this about back under control George and that the SAE have done their work, they are great little workers! its a shame this is only a trade show as there are some big names their and not that far from me either

I'm sure come show day though that this tank will look fantastic and no one will be none the wiser.

If this would of been me and I'm sure allot of others on here too, it would of meant a total strip down and start again, great skill in being able to tweak it and pull the scape back to looking tip top.

How do you go about moving something like this in the car without damaging/disrupting any of the scape? let alone equipment!

I've spend literally the last 20 minutes just staring at the SAEs going about their business, and plucking away at algae buried amongst the moss. Thankfully the moss is staying in-tact!

It's really therapeutic to watch. If I get time between the usual weekend chores I'll try to get a video.


pmgsr said:
George, regarding algae, what about an overdose of excel for 3 days? Wouldn't you consider it?

Hi Pedro. I'm a bit fearful to overdose liquid carbon in any tank due to the toxic nature of the product. On the whole I try not to use it in any tanks now to be honest, but will spot dose BBA if required.


Gary Nelson said:
its a shame this is only a trade show as there are some big names their and not that far from me either

I'm sure come show day though that this tank will look fantastic and no one will be none the wiser.

If this would of been me and I'm sure allot of others on here too, it would of meant a total strip down and start again, great skill in being able to tweak it and pull the scape back to looking tip top.

Although it's a trade show I'm sure there's a way to get in... Alastair is going apparently - maybe try PMing him? It would be great to meet you.


Dave Pierce said:
How do you go about moving something like this in the car without damaging/disrupting any of the scape? let alone equipment!

Thanks Dave, and good question!

I've done this sort of thing a few times now but it's always a massive risk and a task that's not undertaking lightly - literally!

The in-tank equipment is disconnected and removed from the tank, then stowed neatly in the cabinet using bubble wrap around glassware. This is the really easy bit.

I siphon out as much water as possible and catch all of the livestock. This isn't so easy, especially with lots of shrimp. Thankfully the vast majority of fish and shrimp make their way to the open areas at the front and right to make netting relatively straightforward - hopefully.

Then it's a case of using polythene sheeting placed over the plants and hardscape, tucking it in strategically to help prevent any excess movement. Obviously the polythene also keeps the plants wet.

Then I move the tank to the car - carefully. The rear of the tank sits into the corner of the rear car seat to help prevent the substrate from sliding forward. The rocks and plant roots also help. The cabinet is obviously positioned separately to the tank; usually in the boot.

Smooth driving to the destination, then the process is reversed.

Doesn't sound like an easy operation... Take it easy going round roundabouts! I would be so afraid about damaging the tank without transporting it in it's box with polystyrene.

However, as you say you have done this before so must know what your doing, and if you didn't go for it then how would anybody get to see these established set-ups in person

Will we get to see any pics of your tank at the trade show? Good luck, sure it will go swimmingly!
Dave's TMC Signature

Dave Pierce said:
Will we get to see any pics of your tank at the trade show? Good luck, sure it will go swimmingly!
Click to expand...

I'll try my best. They'll be other planted aquascapes on other stands too including Tropica, Fluval, Unipac and Aqua One, so I'll try to get some pics of them.
www.georgefarmerstudios.com

Flamin typical these issues before a deadline, bet you havnt had algae like that in years! I'm sure the siamensis will have it sorted in time, that and your attention to detail.
Good luck with the move mate.
Re-education Journal.
NAtural Jurassic Journal.
Dragons Crypt Journal.
Sticks and Stones Journal.
Dusting off the old Fluval Studio 900 Journal.
Aquanano 40 CRShrimp tank Journal

I am curious about your filter. Is this running full power or is it knocked down at all?