ok, im seeing so often on other websites too that people love taking macro shots. now theres nothing wrong with it, but people seem to be taken in by it. wow, look how close he is to that fish etc etc....its easy!

it would be great if people were to start switching the macro function off and just shoot long. or even use your macro function and just move the camera back 6 foot to get some good depth to your shots.get creative! your photos will thank you for it. and it will give you some great skills for ADA and AGA entries in the future.

now i'm no expert but im applying simple photography tips to my images and there slowly getting stronger. i'm not preaching guys, just try it and see what you get. dont forget the rule of 3rds 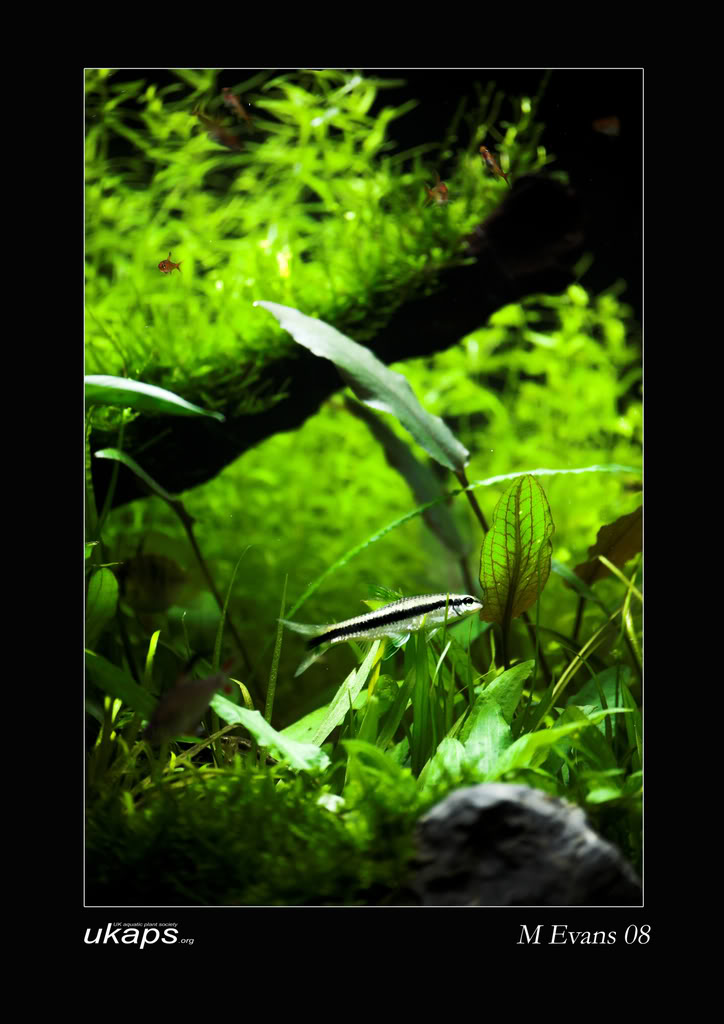 Excellent picture, thanks for sharing.

whats the really tiny fish in the background?

Nick16 said:
whats the really tiny fish in the background?
Click to expand...

Nice photo! I've noticed that you're photography is getting better throughout your journals. It's something I need to tackle.

I agree with Thomas the photos are great, one the enjoyable elements in your journals and good advice re distance... I've not managed any good shots of the fish in my scape. when I get time, when i get time... sigh

Are you suing tripods when doing this? Is this a technique that can be used with a long say 28-300mm lens?
How do you get a nice light with out wobbles?

Beautiful veins under that crypt leaf.

Can you call your picture a macro? Macro is a different type of photography to the one you have shown, Mark.

Dave Spencer said:
Can you call your picture a macro? Macro is a different type of photography to the one you have shown, Mark.

Yur, I think Mark was making the case for not using macro all the time.

Macro is when the image resolved on the film (or CCD these days) is life size, but it is often misused as a term for any 'close-up' shot (mostly due to misleading advertising material from camera and lens manufacturers!).

Who uses macro all the time?

I can think of a guy called Aquasaur who does a lot of macro, but his results are stunning! Very few people take aquarium shots in macro in my experience.

Dave Spencer said:
I can think of a guy called Aquasaur who does a lot of macro, but his results are stunning!
Click to expand...

i'm not naming names dave, but yeah i know who you mean and yes his photots are technically stunning...creative? i....in fact a lot of us on here could emulate that stuff, but i for one will try to stay away . i dont doubt that whats individulas do with there macro photography is ace. great for fish identification. nor do i doubt others that do it. it's just i'm coming from a different angle, thats all. maybe what i'm trying to do is more on the creative side? i dont know. i just like trying. maybe i'm barking up the wrong drift wood branch. i'm might switch to macro myself then 8)


Dave Spencer said:
Can you call your picture a macro? Macro is a different type of photography to the one you have shown, Mark.
Click to expand...

i dont remember calling this macro, i think the thread is called "go long" not macro. but going into macro mode slr or not can give similar results dave.

graeme, you mentioned 28-300mm thats my whole point, go long mate. the image ive shown here is @ 168mm,just watch your F stop. if you got room get right back. it's gives a different sense of depth to the image IMO.

i did use a tripod, essential really.

saintly said:
graeme, you mentioned 28-300mm thats my whole point, go long mate. the image ive shown here is @ 168mm,just watch your F stop. if you got room get right back. it's gives a different sense of depth to the image IMO.

i did use a tripod, essential really.
Click to expand...

I thought so mark. What will the camara do when flicking from macro setting on the dial? Why not just click a lower f stop? Does the macro setting change something at all, or is there something ells going on?

If I was to shoo at 300mm, witha tripod, I would need some very low shutter speeds to get the right exposure, even with a loew F stop. So how do i get round that enought o shoot and freeze a moving fish? ISO it up, F stop right down and hope for the best?

The macro setting automatically chooses One-Shot AF, so a half-press automatically focuses for you, and single shooting, so one press means one exposure i.e. the opposite of the sports setting with AI Servo AF and continuous shooting drive mode.

You still control the aperture which, of course, should generally be larger to throw the background out of focus (bokah).

So the macro setting isn't really necessary at all. I shoot on Av for pretty much everything, giving me control of DoF. I normally manually focus too.

Your focal length shouldn't really effect your exposure - I think you'd need the same exposure with 18mm and 300mm, given the same subject. Light over the tank, aperture and ISO control the shutter speed required for a correct exposure.

Hopefully Mark will be able to shed some more light.

Graeme Edwards said:
What will the camara do when flicking from macro setting on the dial?
Click to expand...

not an awful lot apart from letting you get closer to the subject. but sometimes like george mentions, you can create a better bokah. because macro allows you to move closer in. maybe, rather than shooting a fish close up, look at shooting a bigger scenes with a smaller window...if that makes any sense? it all depends the internal structure of your tank....plant placement etc.

i do remember operating a couple of non slr cameras and i seem to remember that going from normal to macro gave a massive leap in the focal range? (not sure on terminology) so non slr users might benefit.not sure on the technical side of that one :?

for eg, my image...if i'd put macro on and moved closer the scene would be smaller but i'd get some great bokah, you can also eliminate clutter. the one other factor to remember is my lens goes macro at 300mm, that looks a lot different to a macro lens say at 50mm

now all of these shots, i could of gone macro for. emphasizing the fish and seeing how clever my camera and lens can be, but why? we know don't we? 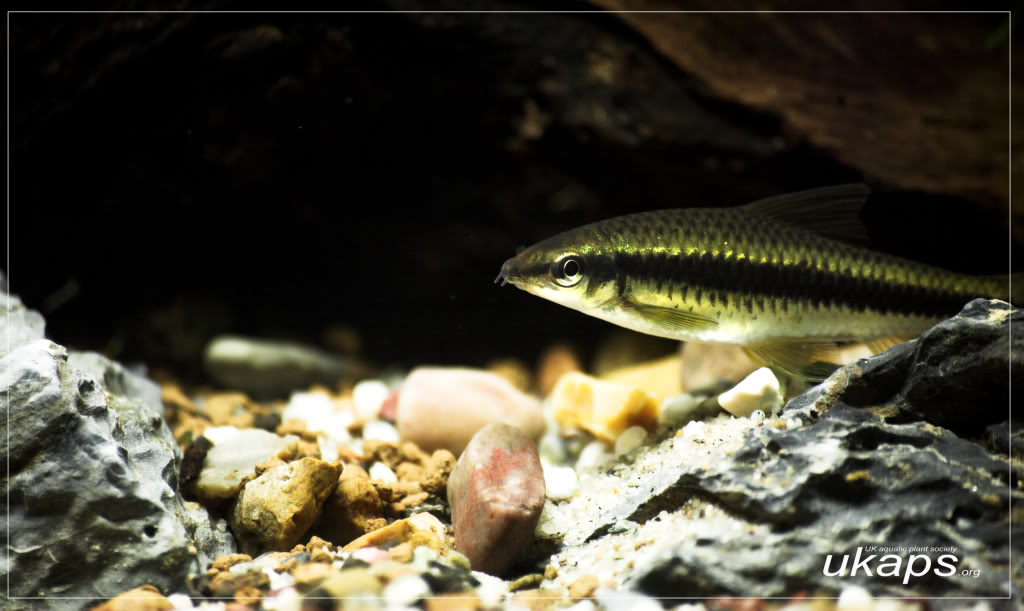 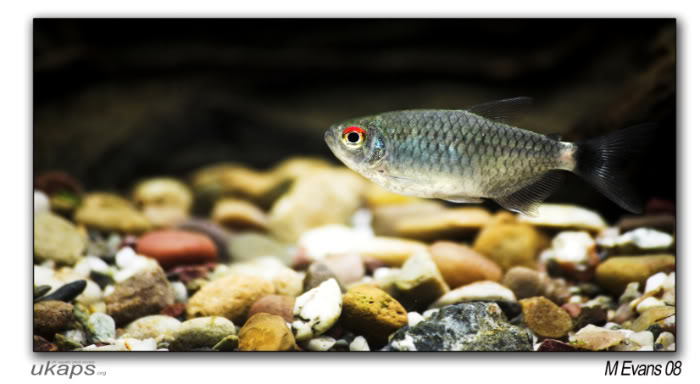 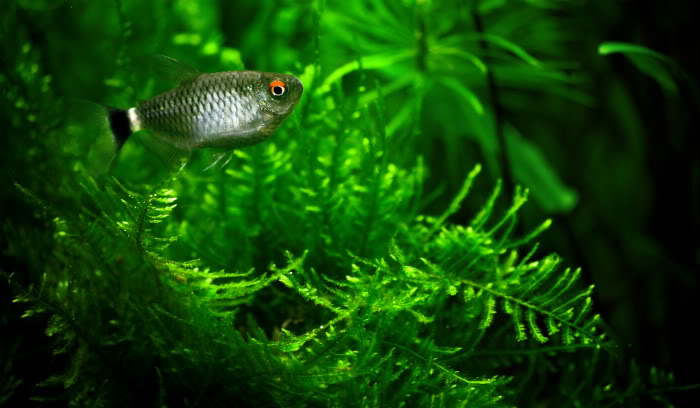 i've posted these before, but you get the jist!

another tip, which i find really important is to be slightly below the tank, shooting up almost and at least, be level. shooting down gives a real strange feel to an image.


George Farmer said:
I think you'd need the same exposure with 18mm and 300mm, given the same subject
Click to expand...

lens depended George. expensive lens' yes that's right, cheaper lens' no. that's if the the focal lengths are on the same lens....zoom lens.

when i quite doing photography i sold most of my expensive kit, leaving my self with my 24-70 2.8 not so long back i bought the cheapest lens known to man

now i'm no technical guru, nor do i know terminology very well, so some stuff i say might sound either vague or wrong, but i think you get what I'm on about. well the photographers on here should at least.


George Farmer said:
Hopefully Mark will be able to shed some more light.
Click to expand...

its working for me

I think I get your gist now, Mark. You mean the macro setting you get on toy cameras

as opposed to using a true macro lens.

I`m a Nikon user so you will need to dumb things down for me.

By the way, I would say spend money on the lenses too, as these are what will keep for years and years, as opposed to camera bodies which become rapidly superceded.

So basically what you are saying is rather than use the macro feature, and get extremely close to the fish, use some other settings ( ) so you can still get the whole fish in, but not as close up to the subject? 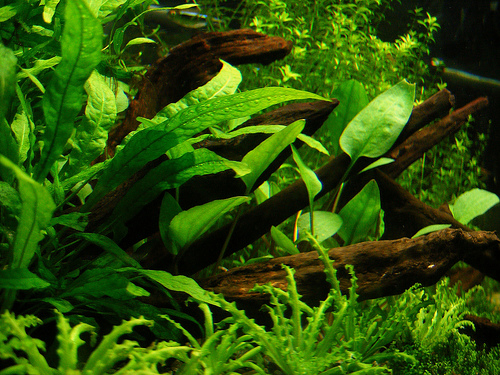 I took this after reading this thread, is this something you would call as 'going long' :?:
Aaron North
My Flickr Account | Equipment needed for setting up an FE | Algae & Nutrients

aaronnorth said:
took this after reading this thread, is this something you would call as 'going long' :?:
Click to expand...

that looks like nothing you've ever done before aaron, 10 times better. looks like you could zoom some more maybe? zoom in as far as your camera will go....put the camera on a table if you dont have a tripod.set it up maybe 3m away? or as far as you can go and shoot away.