So I actually started this tank out a bit over a month back. Here are some photos after it had just been set up: 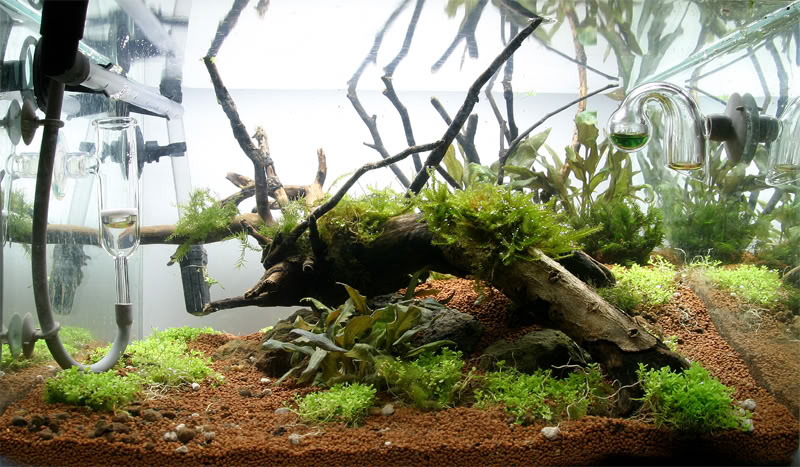 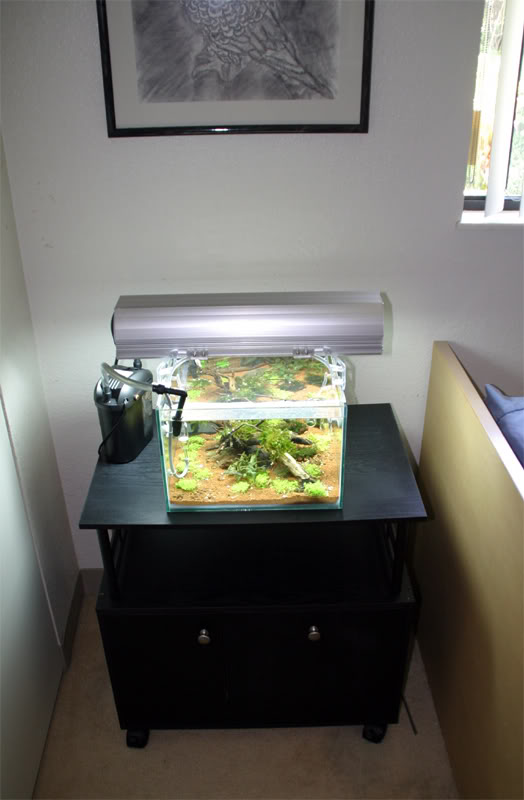 As you can see, it's not a typical tank shape. Measurements are 30 x 20 x 30. If you want to show off mid-ground structures and bottom feeders, have a super deep tank.

Hemianthus Callitrichoides
Cryptocorene Wendtii
Fissidens Fonatanus
Other moss species (taken from local river . . .)
Echinodorus tenellus
Eleocharis accicularis
Hemianthus micranthemoides (can't see in back)
Glossostigma elatinoides (a few pieces snuck in on the Hemianthus, but now it's going nutz in the back of the tank) 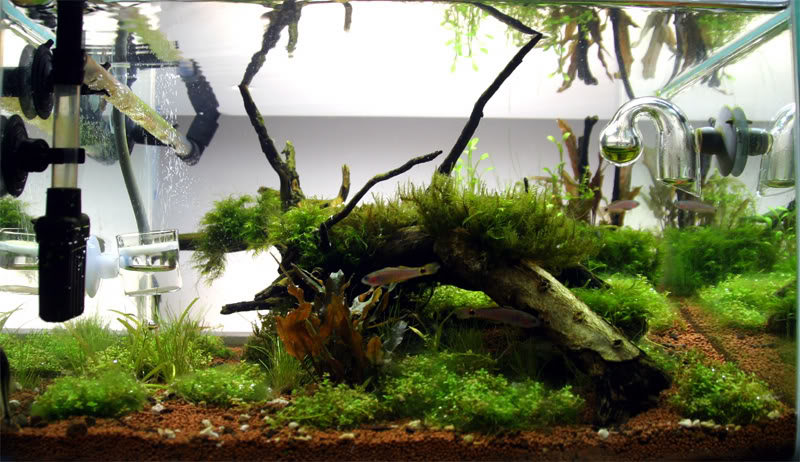 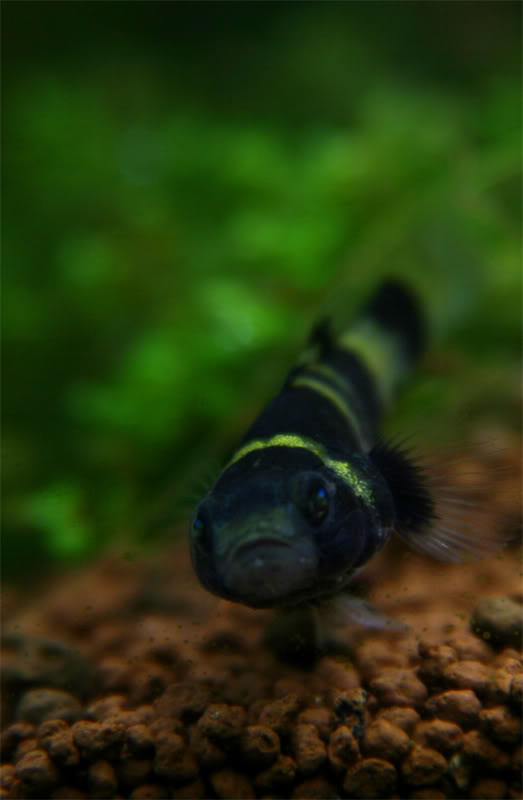 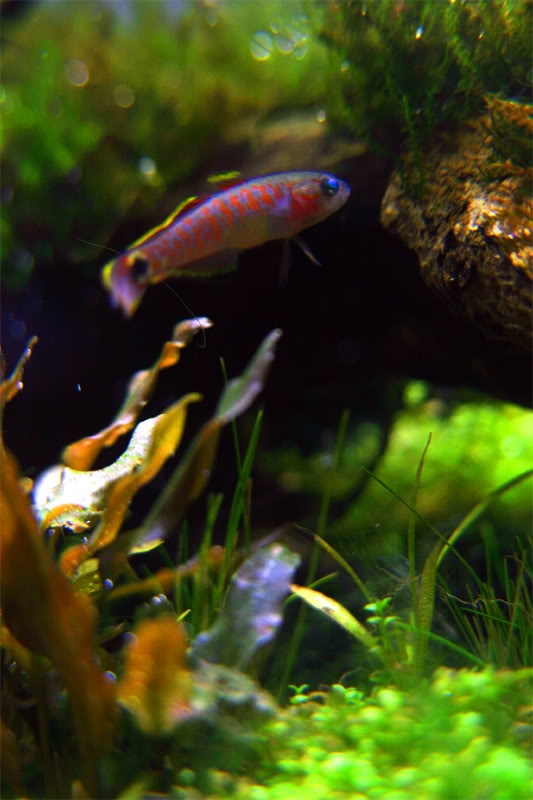 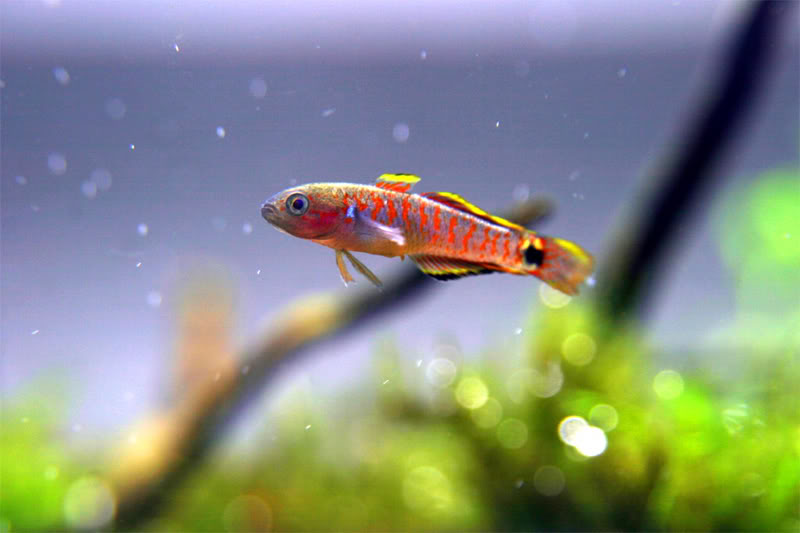 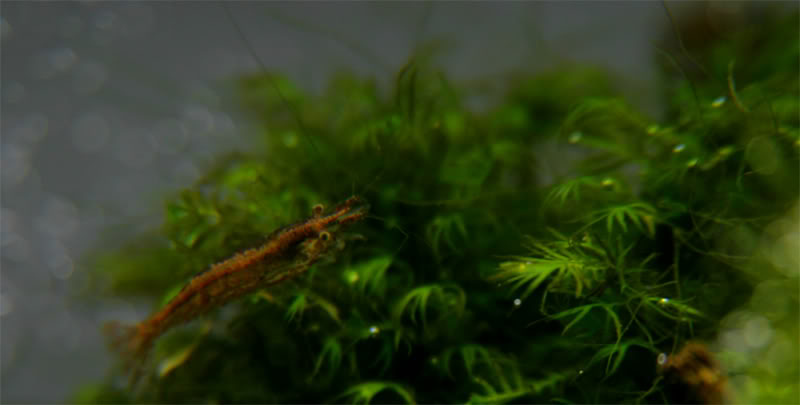 That's looking very nice Does the goby bother the shrimps?

Wow, never seen gobies and they are beautiful! They fit right in that tank and it's looking good!

Nice one! Wow, I never knew Gobies could be so nice-looking - what type are they? I'll have to try them out some time.
Thomas McMillan | Lianko

What tank mates are in there?
M

You do realise that that is a brackish species of bumble bee goby there?
It will not live its life expectancy in freshwater.

Pompeyfan-- I'm sure the gobies will pester the shrimp, certainly eat the small and babies of the group-- but I'm ok with that. The shrimp is Neocaridina denticulata, or Cherry Shrimp (but these are the "natural" or "wild" form so the color is no where near as strong as the man-bred variety). I'm not sure how, but somehow they got into the Hawaii streams and as anyone who has bred cherries could imagine, give them a nice year-round tropic stream with next to no predators and they'll breed like rabbits-- the rivers are infested with them. It's something of an ecological problem since they probably compete with the primarily herbivorous native gobies and native shrimp for food and territory. In any case, we sell the little buggers as feeders at 10/$1 USD in every pet and fish store, and see no signs of their numbers dwindling. So, if the gobies want to gobble up a few, no biggie as they'd have been bought as feed for bigger fishes by someone else anyway.

Mr.Luke-- Ah, too bad. Well I'm ok with that I guess. Hypothetically, even if I did take them back to the shop, the odds of an experienced, educated brackish-tank keeper picking them up is so miniscule that they'd be better off with me anyway.

Spectacular stuff Steven. Wow, thanks for sharing. Did you do anything special to maintain the slope or is the hardscape acting as a natural dam?

Thanks ceg-- as you can see better in the top photo, there's a pretty sturdy base of rocks built into the slope to hold things together. The tank's proportions are also condusive to being able to maintain a slope, as there's a lot of proportional depth (so the slope is very gradual instead of steep).
You must log in or register to reply here.
Share:
Facebook Twitter Reddit Pinterest Tumblr WhatsApp Email Share Link