To any one wanting to sort hand this (I understand ) I have highlighted in bold the important bits.

Right, so some of you (hopefully ) read my thread about the gold fish bowl and them updating the planted section. Well I popped into the shop a few days a go and this is what I found 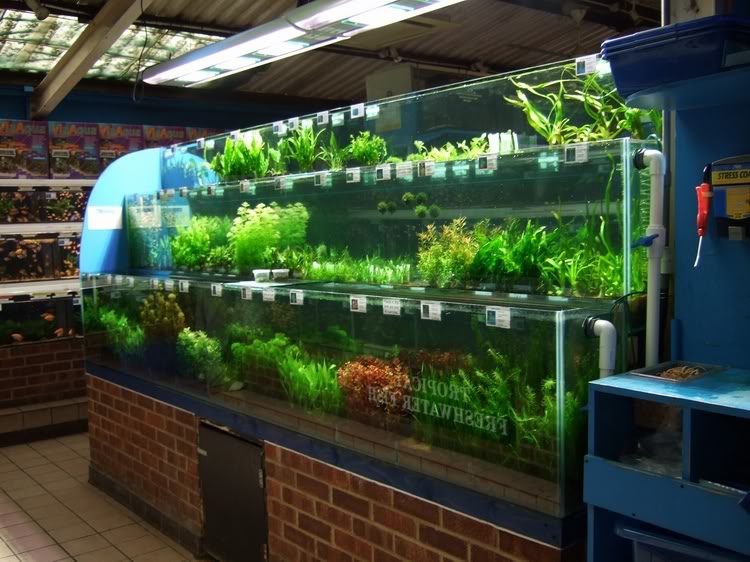 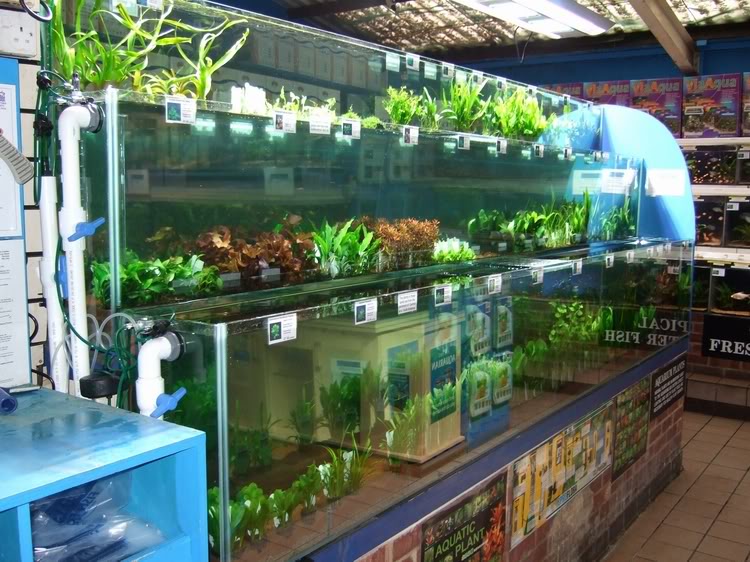 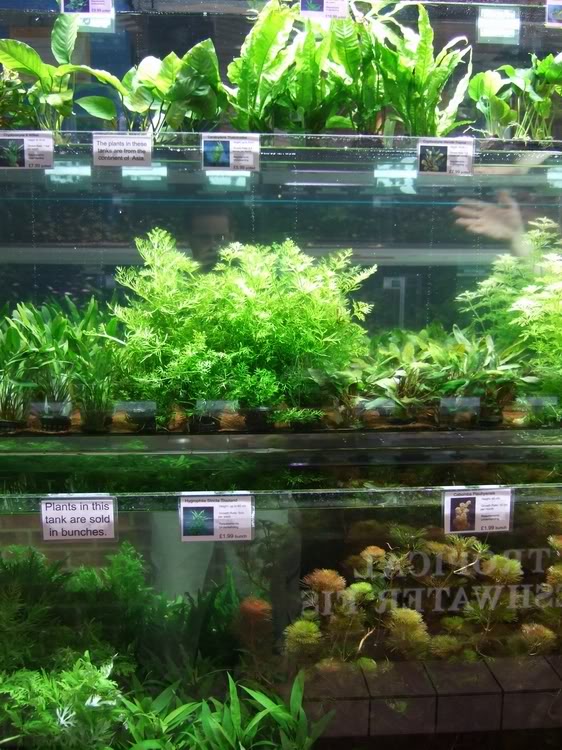 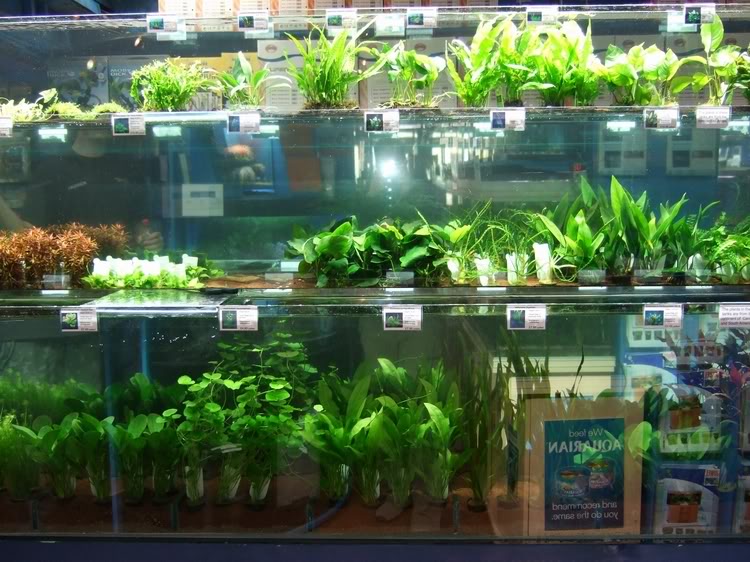 Hopefully you'll agree its a vast improvement over the traditional waterfall system. The tanks run on a central filter system but are not directly connected to each other, even though it does look like a waterfall, its not. The vast majority of the plants are Dennerle and the GFB will be stocking pretty such 100% Dennerle plants. I have to say the quality looks to be excellent. They have some interesting mosses too. CO2 injection into the holding tanks and ferts as needed. 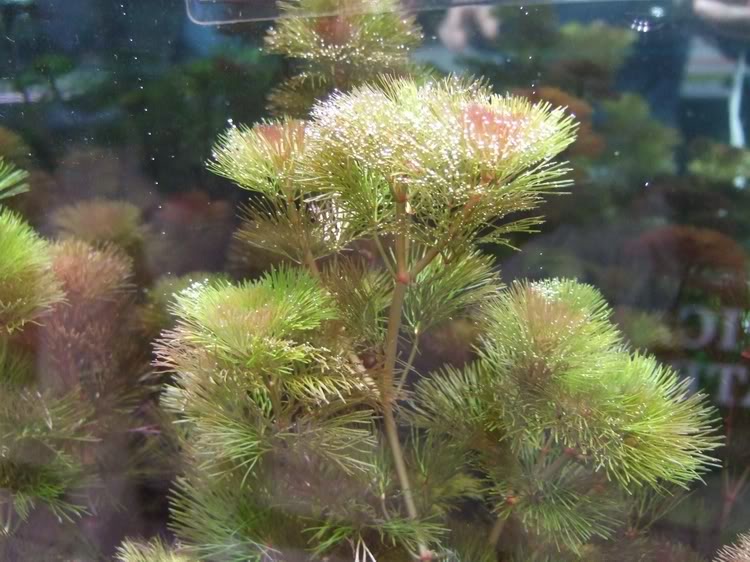 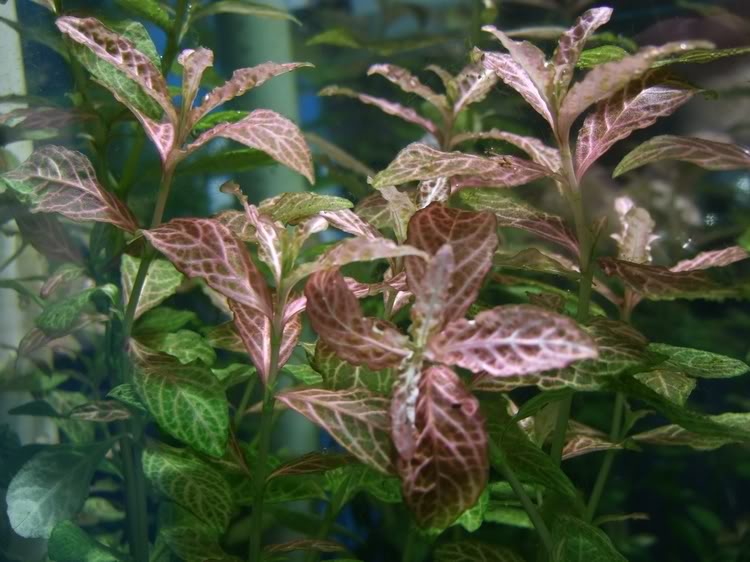 I got talking to Barry the owner and he said they would probably redo some of the current planted display tanks to make them fully planted. So I chipped in and offered my hands when they did it. He also mentioned that a Dennerle representative would be giving a talk to the shop staff and I could probably attend as well. So that is where I went last Wednesday. To the shop after work and listen to the guy talk through the Dennerle system.

- Low filter rates 1 to 2x the tank per hour
- range of ferts according to their system, which seemed very like the ADA system in that its very prescriptive. I.e. one squirt of this on day X then each X days after. One squirt of this on day Y, etc.
- Seems that Dennerle 'system' creates low light tanks. No need to up the lighting, but add reflectors if needs be. FYI they donâ€™t sell HC. It wouldn't do well in the conditions they suggestI wouldnâ€™t think anyway.
- heater cables (I wont go into this )
- base layer substrate, topped with gravel
- CO2 to be 15-20ppm.
- the more water changes the better
- it was clear that they are still tied to the â€˜Dutchâ€™ way of things re scaping, but the guy was German (obviously!) so I guess thatâ€™s understandable.

Unfortunately I wasn't able to ask questions as it was more of a presentation than a Q&A.

However, and this is the really exciting bit, Barry said that if I wanted they would let me pretty much do what I wanted to one of the Rena 120x50 tanks!!!! Perhaps even two tanks!! They would of course supply everything and do water changes, and if necessary and I wanted to, I could then just maintain it planting and pruning wise. The low light nature of the tank will help with that. I will also probably be confined to using the Dennerle system, which isn't what I would do given free reign, but perhaps I can run the second tank EI, which would be an interesting comparison

Now I suspect that most of you are reading this thinking thatâ€™s stupid he's wasting his time. But I really hope that if I can get into the other side of things and help educate the shop, then slowly I can show them the other systems and ways of doing things, not thatâ€™s Iâ€™m saying EI is the only way but it is a simple method and I like that about it. Time will tell. Either way its an exciting proposal for me. And Iâ€™m chuffed that Barry is willing to let me do it.

Now I would really hope that I can get some advice from people on here re the scape, its a big tank, much bigger than anything Iâ€™ve done before. I was going to keep it fairly simple, a bit like Georges 120cm, not too 'fussy' but a nice scape. I will come up with some ideas and let you all know. I have access to redmoor wood and dragon stone.

Thanks for reading, please help me with the scape once I get it going, I donâ€™t want to pants this one up.

I WILL get some laminated Ukaps flyers to stick to the tanks, I have already made sure of that one

I bet your very excitedabout scaping a display tank.

I've never heard of a UK shop supplyind Dennerle plants, there was always a problem with maintaining them, that's why Tropica was the main contender. How do they compare, price and quality?

AAnd what about those heating cables...
L

A big shame I don't live there.

(I want some of that Hygro.)

Nice one Themulous thats great stuff. Congrats on the scapeing offer, everyone here will chip in and i very much doubt you "pants it up" anyway!

Thanks guys its cool that I'm getting the chance to do it. It'll almost be the prefect tank, I do all the fun planty stuff and the staff do the fert dosing and water changes, bargain!

TDI - Its the first shop Ive been into that sells Dennerle I must admit. Plant quality was very good, esp if you get there on the day of delivery. The prices are about the same a tropica from AE, around Â£5 for most of the pots.

Do Dennerle do plants exclusive to them? i.e. varieties they've developed? Did the Barry know you previously? Seems very trusting to give you free reign on a couple of display tanks without knowing you! You going to be using heating cables in them then?

I should go and have a look. I only live about an hour and a half away from TGB but I've never been there.

Congrats Themuleous, nice write up and photos. Good luck with the display tanks, a fantastic opportunity to show your talents, a bit daunting but very exciting at the same time.The hobby is really starting to gather pace now. This planted tank thing might just catch on.

Good luck with the 'scaping. Should be fun.
V

I hope the staff don't forget to dose the tank accordingly, otherwise it could be overrun with algae by the time you next visit.

What ideas have you got for the tank? Also, what mosses did they have?

Interesting they only recommend 1-2x water turnover for the filtration...

Will you be turning this into a journal?

Great stuff Sam. What a plant display and there looked like some very healthy Crinums on that top level. If only I was closer to Oxford! Good luck with the scape!
Ed
T

Re the scape for those who went to the FoF last year I think I'll try something similar to the one George, Dan and Graeme did on the Saturday. 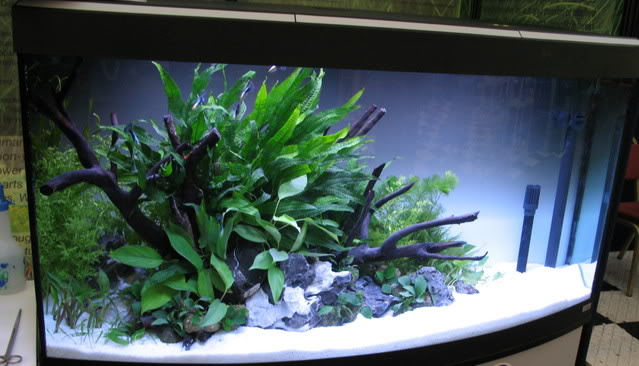 Think this would suit the lower light levels Im doing to be running.

If I am able to go more high light, EI on the second tank I'm thinking something very ADA with a massive glosso carpet and lots of dragon stone, just to show another type of scape.

Voo said:
Interesting they only recommend 1-2x water turnover for the filtration...
Click to expand...

That's the Dennerle methodology. They like a very slow movement through their filters to encourage de-nitrification (according to their book, The Big Dennerle Guide), in fact they prefer <1x turnover. Nitrates and phosphate are limited too, but interestingly they've recently released Dennerle A1 NPK, that's a daily dosing bottle containing NP.

My belief is because of the lower light levels, algae is minimal - there's so much more room for 'error' with low light.

But if one combined the Dennerle principles with high lighting, algae would likely be an issue. I know this from experience. I suggest it's why A1 NPK was released, to keep up with the higher lighting trend some folk are running.

Anyway, enough of the Dennerle discussion...

I'm sure Sam will make this tank look nice and work well. After all, Sam's tanks never have algae....

Just to update you all. It looks like I'll actually have four tanks to scape!! I'm gonna sort out a planting list tonight and so Barry can order the stuff in, then do the scaping next week after work sometime.

I have to the two rena tanks sorted re a scape, but if anyone sees a nice scape for a 2ft tank when they are surfing around, please post a link so I can get some ideas.

Heres the plan so far.

Rena 2 - Iwigumi with carpet of glosso and lots of rock work. Perhaps some hairgrass if needed but not sure yet.

2ft tank 1 - Similar to the FoF tank George did.

Any thoughts/ideas please chip in

I'll run a journal, prob a combined one for them all, to save time, space, etc!