Congratulations on the birth of your new fry! And well done.
Kind regards

Well,no survivors from my gourami's first batch,not a great surprise for me as it was totally unplanned and they really could have done with being in a tank of there own,not sharing with plecs and cories.I am going to set up a big storage tub as a breeding tank and give it another shot,figure I've got 3 months before I pop myself so that should be time to get them (hopefully) to a big enough size.
Anyways,tanks!!Small tank is fantastic (sand substrate,no co2).To anyone who wondered if a set up as basic as this could work,it definitely does.Maybe growth is ot phenomenal,but everything is thriving and looking lush,to the point where I have been able to start giving plants away!!
My mystery plant (looks like a small vallis but sort of rosette form) is now in both tanks and sends out plantlets roughly every week.
I've gave up trying to get Marti's Sword for my main tank and went for Echinodorus Rose,got that about 2 weeks ago and the new leaves are sprouting a beautiful rose pink,and I must say,it's amazing the difference between the emerging submerged leave shape and what I can only surmise were the original emersed ones.The day after I bought this (Â£12.50 inc postage),I made a wee visit to PAH and saw a sword I couldn't resist.As usual,being PAH,it was unlabeled,but had broader leaves than my 'rose' that were a stunning oxblood colour,Â£3.99!!
So of course it came home with me and to my joy,when I unpotted it,there were actually two plants in there!!Now submerged leaves are just appearing on this plant now,so I'm keeping an eye on it,there's only one brand new one,about 4" long and the colour of a raspberry.Once I've got some more submerged leaves I'll post a piccy for id,hopefully for one on my mystery plant too now it's bigger.
Some kind soul on TFF sent me a Crypt,Wedntii Green for nowt,which seems to be coming along nicely.
The one plant I will recommend for stems for beginners like me is Hygrophilia Polysperma 'Rosanervig'.From my original one pot from PAH,I now have around 20 stems in each tank,and the colours are beautiful,use it as a background behind greens and you get a delicate rose haze,ranging from very pale pink to deep raspberry,some of mine are a very deep pink and I can't believe how beautiful they are for so little effort.
Neither of my tanks run co2,my small tank has playsand substrate,gets 2ml flourish twice a week,and about the same excel twice a week,big tank has a laterite base,topped with eco complete,2.5ml app excel almost every day,flourish occassionaly.
The Hygro actually grows faster in the sand tank,I also planted a few loose stems of hc in the sand tank and the took hold much quicker than the eco comlete.
Thinking of trying a sword in the sand to see how it goes.
Fishwise,I now have,in the small tank:
3 male honey gouramis,being rehomed next week.
10 neons
5 gertrude's rainbow

New plant addition today,echinodorus latifolius,plated round the base of my mamba rock to soften the edges a bit,witheld a couple of plantlets for the sand tank so off to plant them up now.
Anyone any pics of this growing in situ?I saw it about a week ago and thought it looked nice (and small) so impulse today,I just got it,now reading up I'm not so sure.
Also,I boughtv a fish from PAH,god help me

a gold angel to go with the other 4 I've got,lets hope it doesn't wipe my tank out.
G

Piccy time,I know I waffle but mostly it's for my benefit (tank diary really).Not the best pics,rubbish camera,rubbish photographer,but you get the idea.
Small tank: 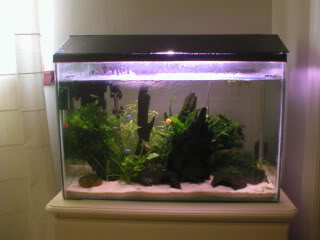 Not a huge difference here,the anubias,one of them anyway (last plant sticking out behind the bogwoood at the back)has had at least 10 decent sized cuttigs taken off and distributed between my other tank and given away.Unsure of which type this is,I have two which I thought were nana,one has small,quite pointed leaves,this other one,which grows quite quickly,has a slightly ruffled edge to the leaves.
You can see a big space at the back right,going across this is a fairly established now vertically standing slate covered with java moss,behind this I have just recently planted echinodorus latifolius in the hopes that this will grow tall and fill that corner in.
I really quite fancied valis,but this is such a small tank that I just didn't know what to go for,I want a tall,dense,grassy effect in that corner though.There's also tiny plantlets of crypt wendtii green infront and behind same slate. 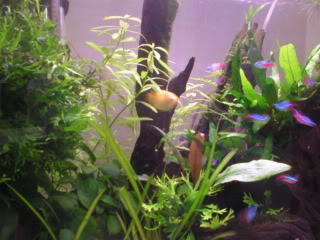 This is my favourite part of the tank,the almost upright arm of bowood has thick mossy green algae all the way down the side the filter doesn't hit,I actually quite like it.The hygro is looking a bit sparse as it had been trailing the surface,so it had been nipped off and shoved in the bigger tank.
There's a low lying piece of bogwood near the front with anubias and windelov on it,also,java moss has aturally started to stray onto it which looks nice.
To the side of this,there's a big chunky bit of bowood,with java fern and fissedens fontanus,then you see the two upright arms at the back,one of which is sporting a nice piece of xmas moss just starting to take off.There was a sort of dell in the middle of all this,which a crypt wendtii green has gone into,hopefully should look lush when grown in. 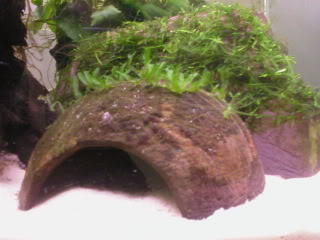 Pelia,I have pelia!!Yay,doncha just love hitch hikers???!!!!Attached here to coco cave and is showing signs of growth so I'll watch carefully,got a little hc from the main tank shoved in in front of this and it's also starting to spread.Pretty sure my other mystery plant which snuck in a a piece of root is sagitaria subulata,had about 20 plantlets of it now.
I like this little tank,doesn't show too good in the pics,but the greens are great and the water always seems crystal. 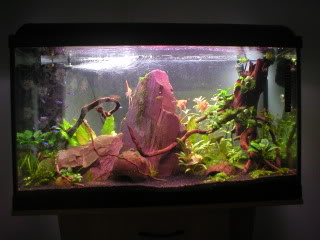 Right,left hand side,there's an echinodorus rose at the back which I am hoping is going to fill that space,you can't see it,but I have latifolius planted behind the left hand slate and through coming around the front of the big slate in the hope that will soften things a bit.
New addition,at the front,you can see a small reddish brown blob lol (a cobble),finally got my anubias nana petite which I'm sooooo chuffed with.That arm of redmoor at the left,that comes out then doubles round,I'd like to get some weeping moss for it,had spiky moss on it but I wasn't keen on the way it grew.
Redmoor on the right I'm working with.There's another red sword just almost right behind the big slate,slightly to the right,which will need to grow in,and then from there right to the far right corner is hygrophilia polysperma.
I'm disappointed with this plants growth in this tank,for some reason,it grows great in the small tank,hitting the surface every couple of weeks,when it the gets nipped off and the cuttings put in this tank.
Growth in this tank is much slower,I must have around 30 cuttings in there now and I really wanted a nice dense clump of it.I have noticed a difference in the last couple of days though,so fingers crossed there.I do get some lovely deep colouration on this plant in this tank though.
Just added more anubias to the big bit of redwood and am swithering on wether to add more,the long stretching arms have fissidens fontanus on,which I will attempt to grow along the whole length.
I'm not happy with the space under the arms of the upright redmoor,think I need another piece of slate to fill this ad hide the base of the stems a bit. 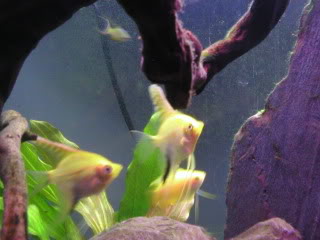 Some inhabitants,just for fun,love my angels,just added 15 neons at the weekend there too for a bit of colour as all my fished seemed to be orange lol.
As I say,there are bits of this tank I like,guess I'll be happier when the swords are bigger and I fill that gap in,also,I don't really like the black substrate and wish I'd never gotten it,I much prefer the natural look of the sand.It's nice to look at and tinker with though,think the black substrate's my biggest bugbear,but we'll be moving soon and I'll be upgrading yay!!
Ayways,bad or good,that's them.
You must log in or register to reply here.
Similar threads